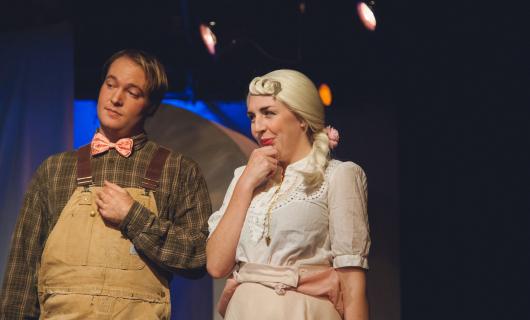 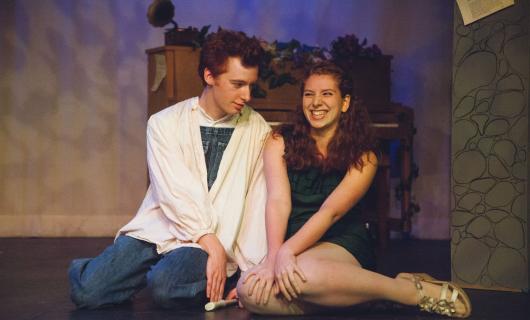 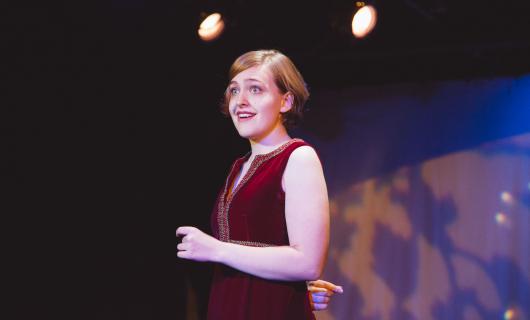 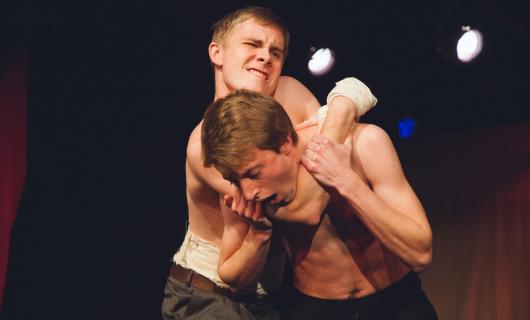 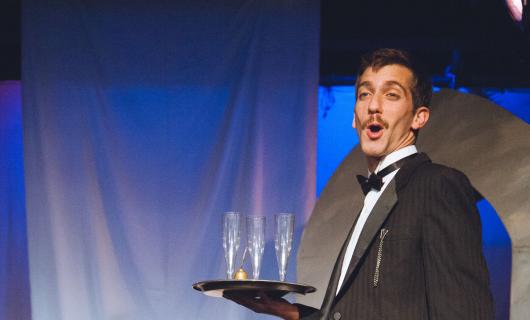 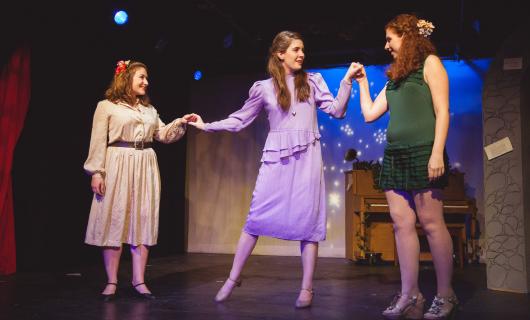 One of Shakespeare's most enjoyable comedies, As You Like It follows its heroine Rosalind as she flees persecution in her uncle's court, accompanied by her cousin Celia and Touchstone, the court jester, to find safety and eventually, love in the Forest of Arden.

Atticus Ballesteros (Duke Frederick) is a first-year in the College, originally from Milwaukee, WI. Because he is evidently incapable of deciding what to major in, feel free to give him suggestions. This is his first production with UT, and he has enjoyed every bit of it.

Sophie Kennedy (Rosalind) is a second-year in the College.

Michaela Voit (Celia) is a first-year in the College. She is thrilled to be in her first Dean's Men (and first University Theater) production.

James Ekstrom (Touchstone) is a fourth-year Political Science major in the College, and this is his 8th UT show (7th with the Dean's Men). His previous roles have included The Merchant of Venice (Shylock), Twelfth Night (Sir Toby), and Henry IV Part One (Falstaff).

Simon Jacobs (La Beau / Martext) is a fourth-year Computer Science major in the College. He's been in a number of UT and Dean's Men shows, including the Narrator in Into the Woods and Launce in Two Gentlemen of Verona. He is also the Treasurer of the Dean's Men board.

Alexander "Xander" Eichner (Oliver) is a first-year prospective double-major in History and Mathematics. This is (somewhat obviously) his first UT show. He enjoys limericks, dissections, and symphonic metal.

Gus Mosse (Orlando) is a second-year English major in the College. He has previously appeared with the Dean's Men in The Two Gentlemen of Verona (Valentine) and Henry VI (Henry VI). He is currently serving as interim Education Coordinator on the Dean's Men board; in this capacity he is co-directing a production of The Tempest at the St. Thomas the Apostle school on 55th and Woodlawn.

Zev Hurwich (Adam) is a fourth-year TAPS/Italian major. He has acted in reWILDing Genius (Ged), and The Physicists (Newton). He directed Graceland, and set designed Break. He also founded UChicago's first Commedia dell'Arte troupe, Attori Senza Paura, and has served as both director and actor in the ensemble.

Amory Kisch (Duke Senior) is a fourth-year History major. He has previously appeared as a different duke, the Duke of Milan, in Two Gentlemen of Verona.

Justin Krivda (Jacques) is a Poet, a Cosmologist, and an amateur Botanist. After graduating in June '14 with a B.A. in English and a B.A. in Physics, with an Astrophysics specialization, he hopes to finish and publish memoirs of his transient experience in Harper Library.  His performance as Jacques is dedicated to Mark Fritz, a late and beloved mentor who piqued his interest in kinematics and encouraged his boundless interest in Wondering through the Universe.

Clara Stahlmann Roeder (Amiens) is a first-year in the College, hoping to major in Biology or Environmental Sciences. This is her first UT show.

David Lovejoy (Charles/First Lord/William) is a first-year potential Physics major in the College. This is his first role with UT.

Laurie Beckoff (Phebe) is a second-year English and Political Science double major. Her previous UT credits include The Doctor and Ariel in The Tempest (Ariel), The Twelve Dancing Princesses (Princess #8), and The Drowsy Chaperone (choreographer). This is her first Dean's Men production.

Ruben Lesnick (Silvius) plans to major in the Biological Sciences and is in his second year in the College. He is very excited to be involved in his first UT production.

Arielle Von Hippel (Audrey) is a fourth-year in the College majoring in Psychology and Comparative Human Development. This is her second Dean's Men show and 7th performance with UT, having been previously seen in The Merchant of Venice (Nerissa), Hotel Nepenthe (Actor 2), The Real Thing (Charlotte), The Lion in Winter (Alais), The Bear (Popova), and The Physicists (Nurse Monika).

Jonathan Sorce (Corin) is a first-year Physics/Mathematics double major in the College. He is new to University Theater.

Gwendolyn Wiegold (Director) is a second-year TAPS major in the College. She thrilled to be making her University Theater directorial debut with such a fabulous cast and crew. Previous UT experience: First Love (Edith), Henry VI (Assistant Stage Manager), The Two Gentlemen of Verona (Lucetta). She has also acted in numerous community theater Shakespeare performances back home in New York. Love to all!

Maria Decker (Stage Manager) is a third-year Mathematics major, Polish minor.  This is her fifth UT production, and her fourth working in stage management.

Josie Glore (Production Manager) is a fourth-year double majoring in Cinema and Media Studies and English. With UT, she has also served as a stage manager, assistant director, and assistant lighting designer. This is the third show that she has production managed (after the Spring 2012 Workshops and Merchant of Venice), and this is also her third time working with the Dean's Men.

Jack Phillips (Costume Designer) is a third-year Biology major in the College. He has previously costumed Henry VI, built a set for This is Our Youth, and assisted on Cymbeline, Twelfth Night, Henry IV Part 1, and The Violet Hour.

Jessica Goodman (Properties Designer) is a fourth-year Psychology major. Last spring she worked on the UT production of The Drowsy Chaperone (Props Designer), and before that she worked on the CES productions of Dr. Horrible (Props/Set/Costumes) and Kiss Me, Kate (Assistant Stage Manager). When not using her glue gun backstage, she sings in the a cappella group Rhythm and Jews.

Amy Cockerham (Scenic Designer) is a third-year TAPS and Anthropology major in the College. She has worked mainly as an actor within University Theater, having appeared most recently in The New Colony's reWILDing Genius (Kelly), as well as Lysistrata (Lampito), Chekhov's Festivities (Merchutkina), and What I Meant Was (Nana). She was also a set design assistant on Henry VI.

Joshua Harris (Sound Designer) is a second-year English and TAPS major. He most recently directed Eh Joe and did sound work for the 5th Week Workshops. In the past, he has done sound design in some capacity for the shows Principia Circusatica and The Real Thing.

Dido Tzortzi (Assistant Director) is a first-year in the College. She has not decided what her major will be yet. She has not participated in past UT events, but is excited to start!

Mariel Shlomchik (Assistant Stage Manager) is a first-year Biology major in the College. This is her first (but not last!) UT show.

Sophie Downes (Assistant Production Manager) is a first-year in the College and is considering an English major. This is her first time working on a UT production.

Hazel Court (Assistant Costume Designer) is a third-year Computer Science major in the College.  She has previously worked on The Physicists (Assistant Props), The Festivities (Stage Manager), Beowulf (Costumes/Props Designer), and The Credeaux Canvas (Set Designer).

Yiwen Feng (Assistant Costume Designer) is a third-year Gender and Sexuality Studies major who has previously designed for Theater[24].

Savannah Smith (Assistant Costume Designer) is a first-year prospective Classical Studies major in the College. This is her first production with UT.

Joseph Whitaker (Assistant Scenic Designer) is a second-year English major in the College. He has previously appeared in The Merchant of Venice (UT/Dean's Men) as Gratiano, Henry VI (UT/Dean's Men) as Edward, and 'Tis Pity She's a Whore (Classical Entertainment Society) as Giovanni. As You Like It represents his first foray into theatrical design.

Lilian Huang (Assistant Scenic Designer) is a second-year Economics major in the College. She was assistant costume designer for last quarter's production of Merchant of Venice.