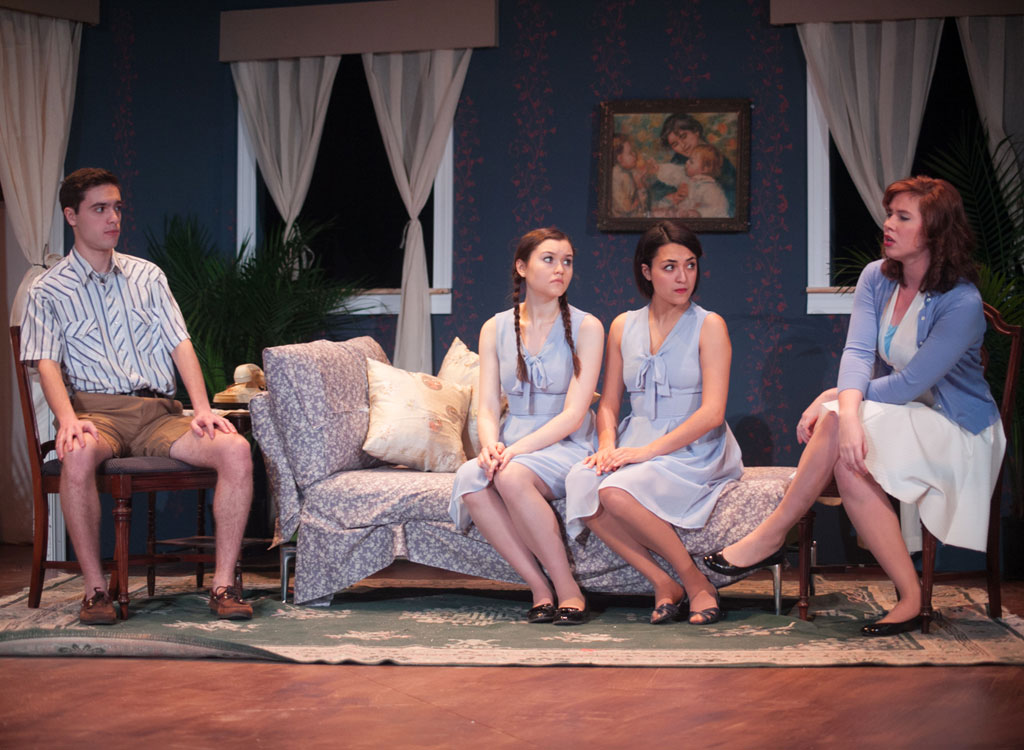 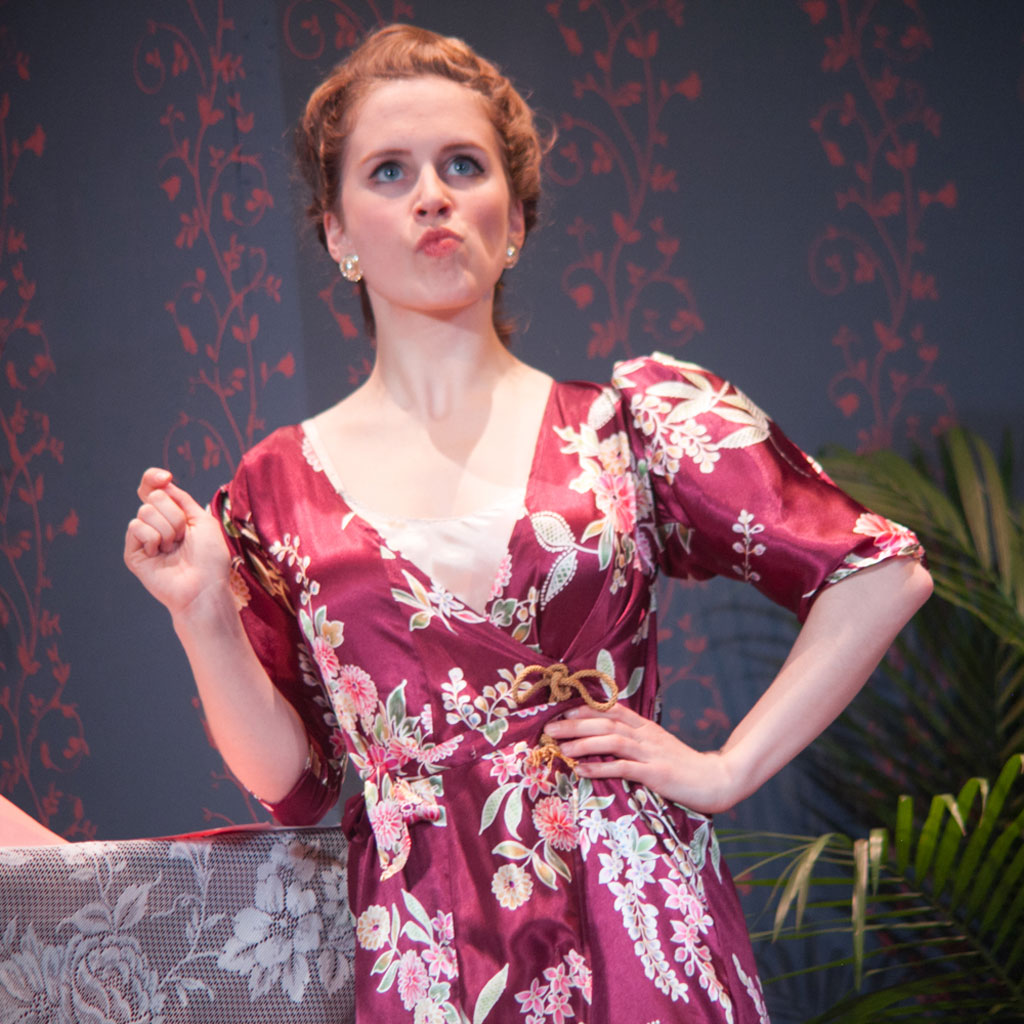 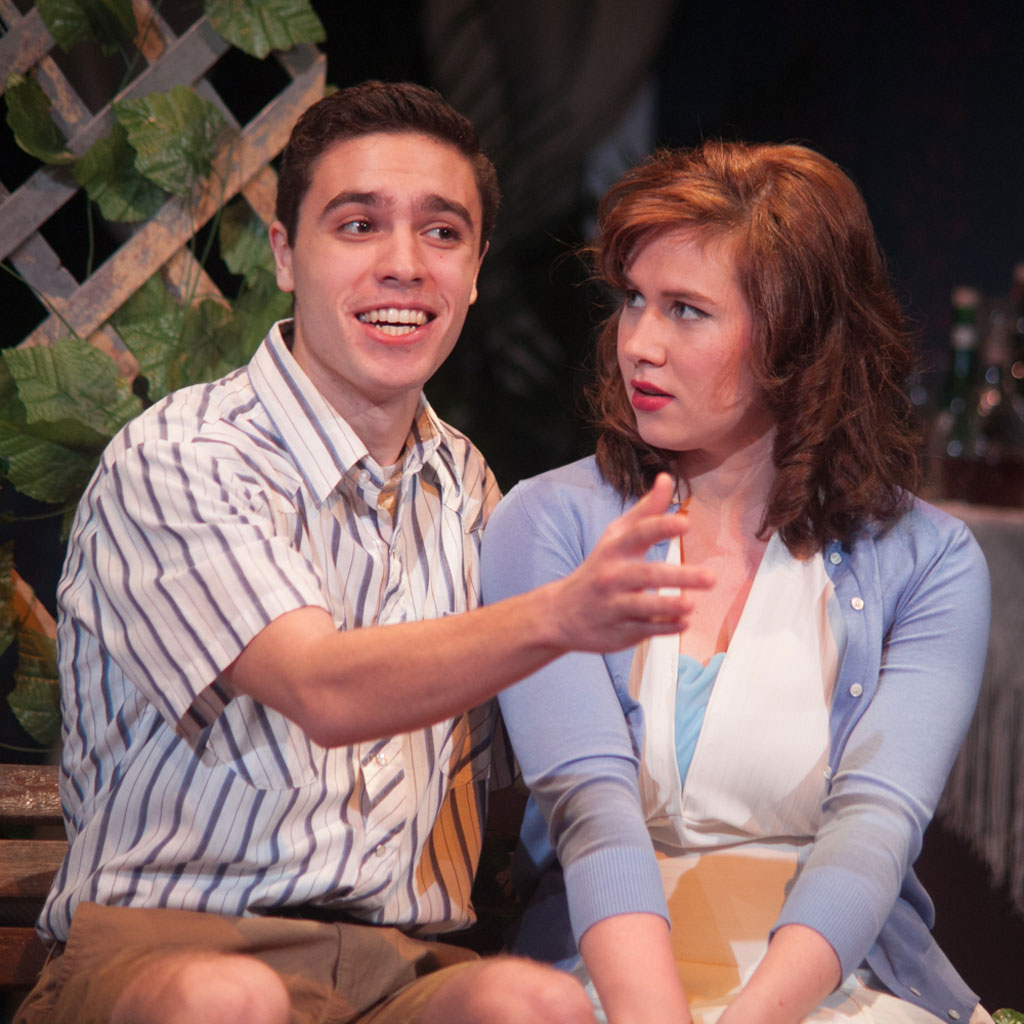 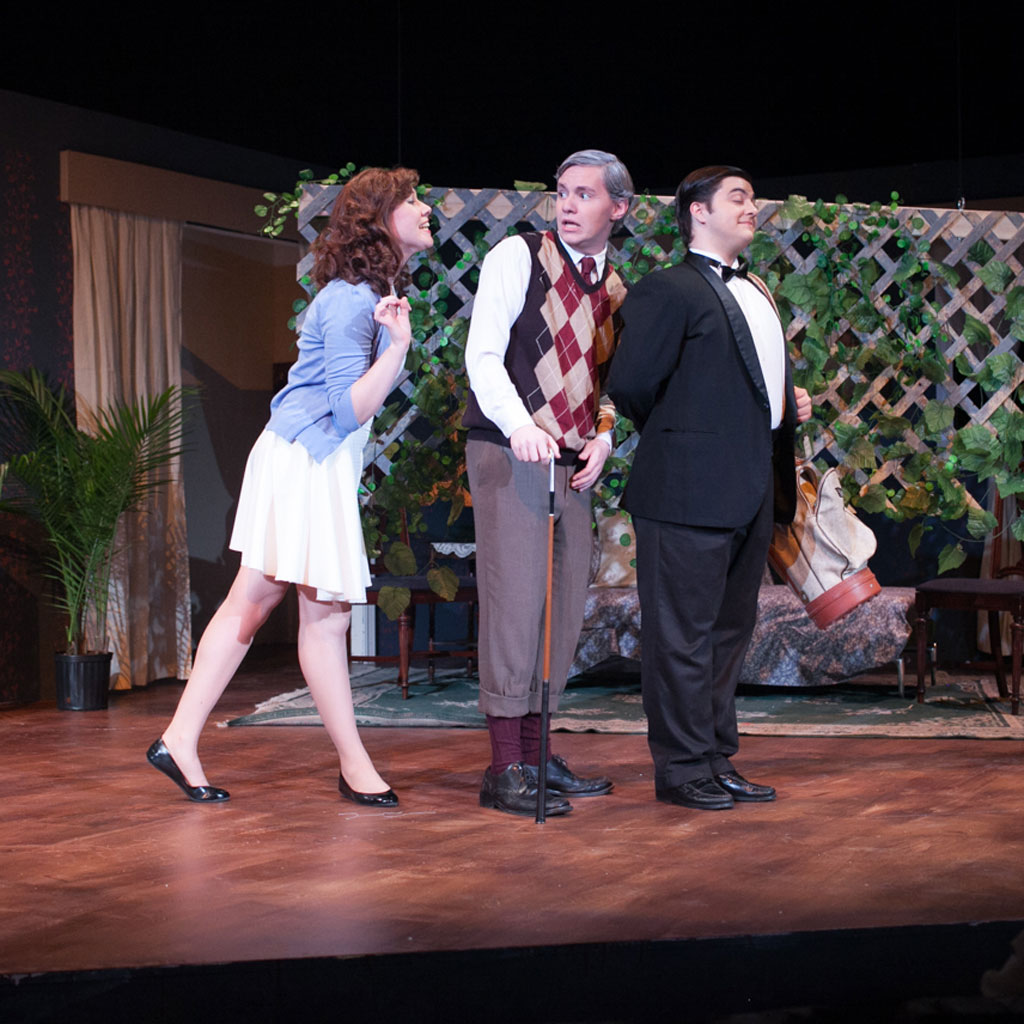 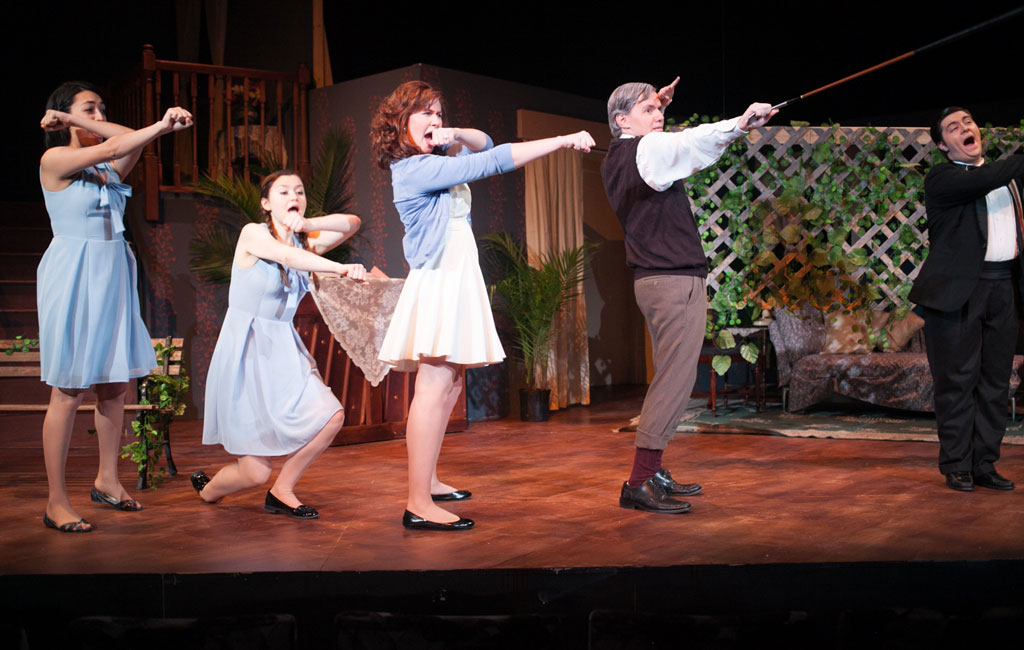 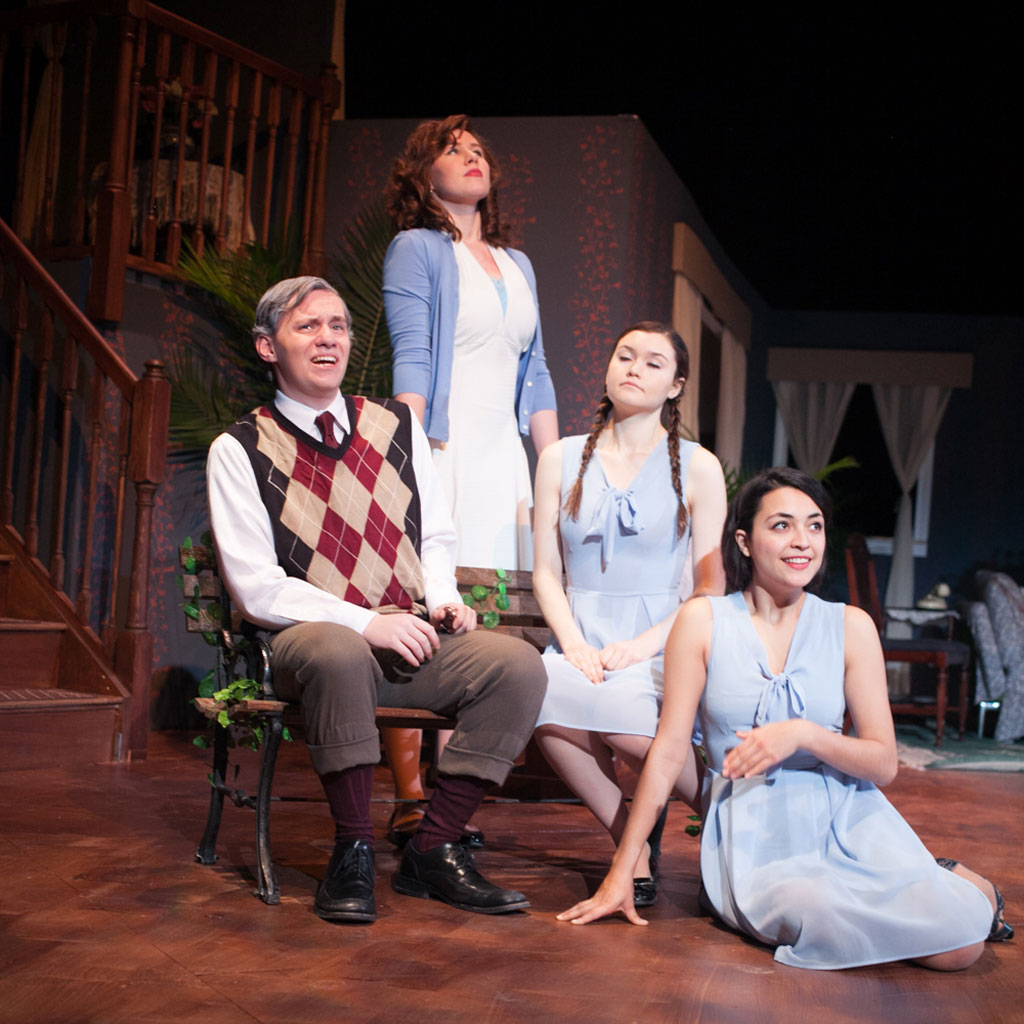 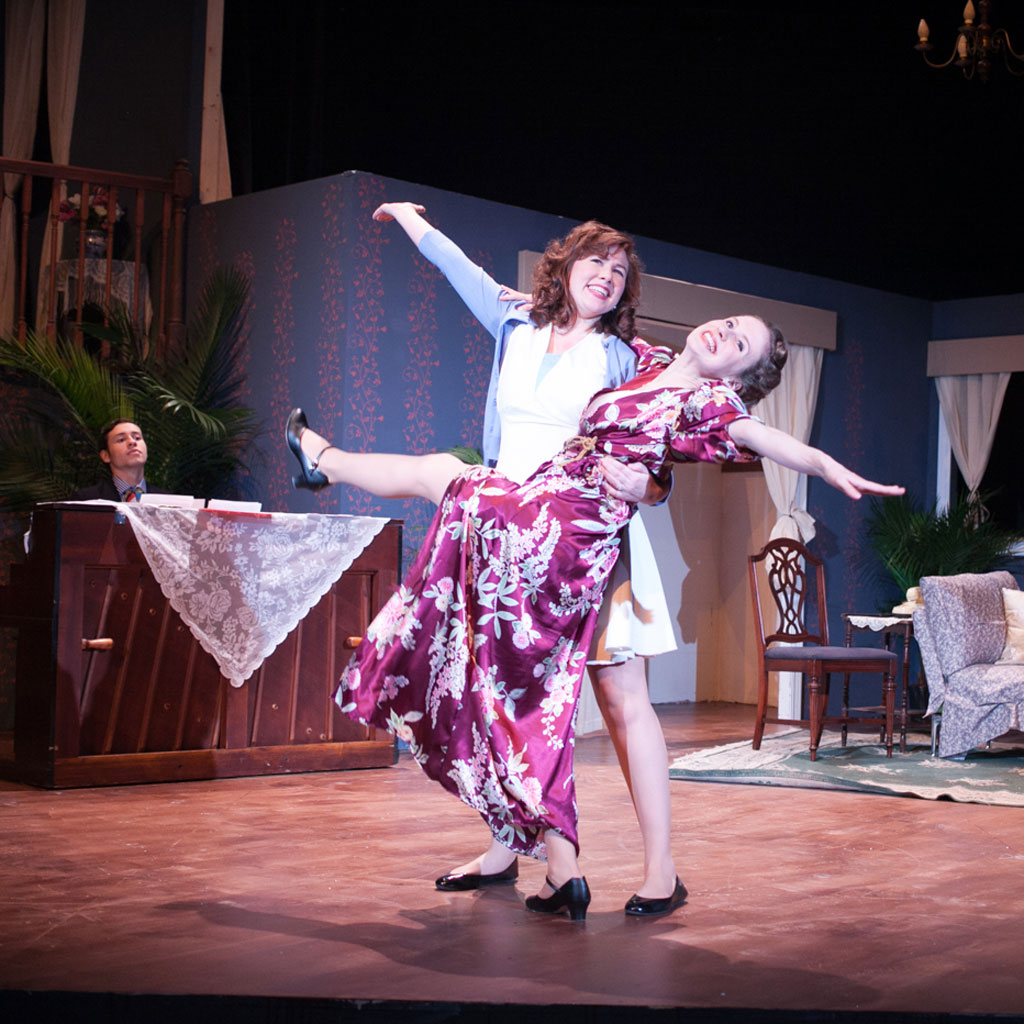 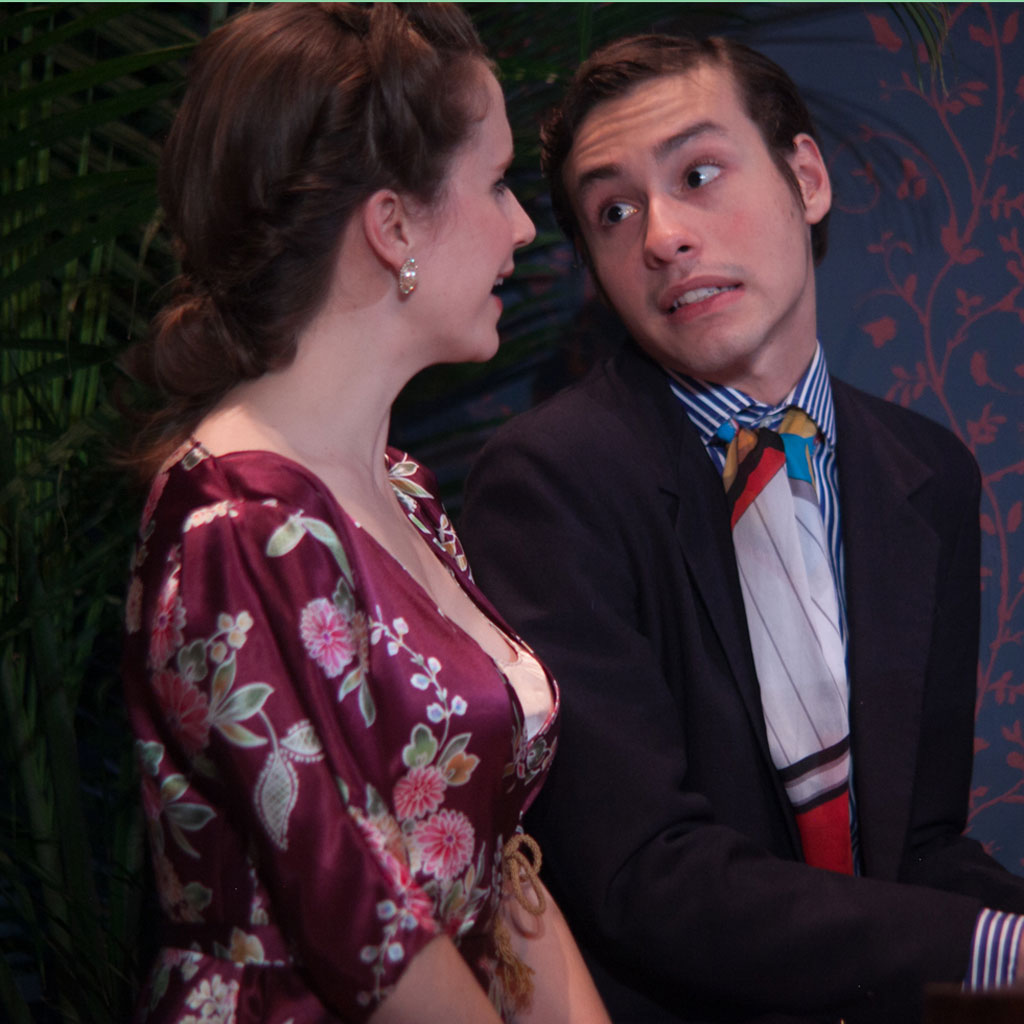 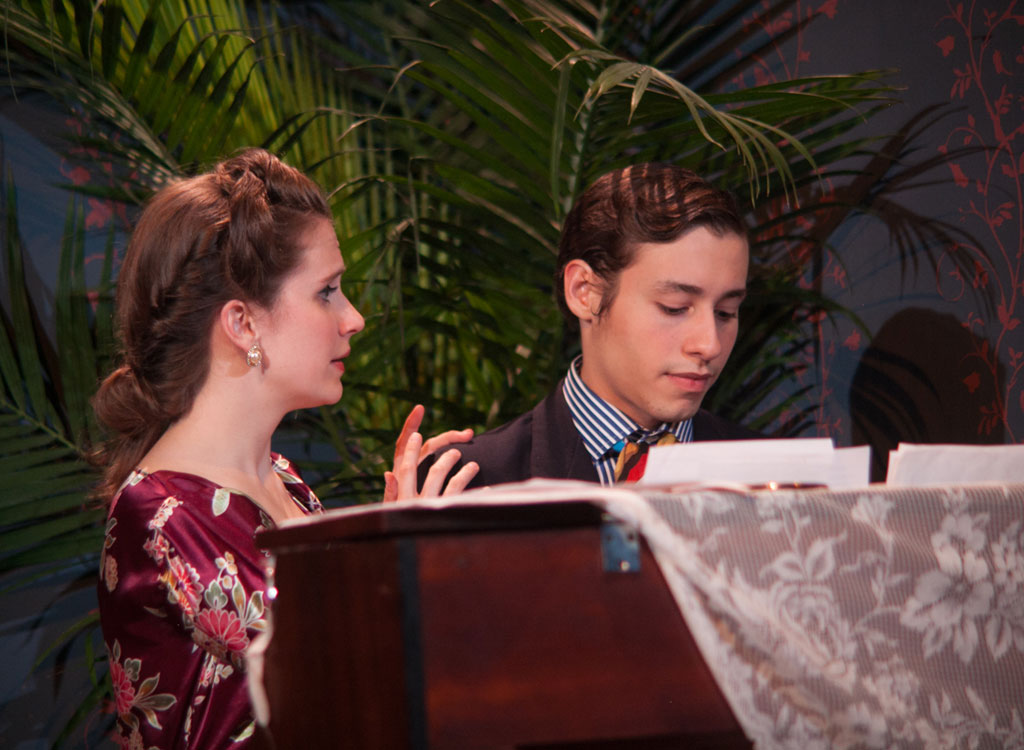 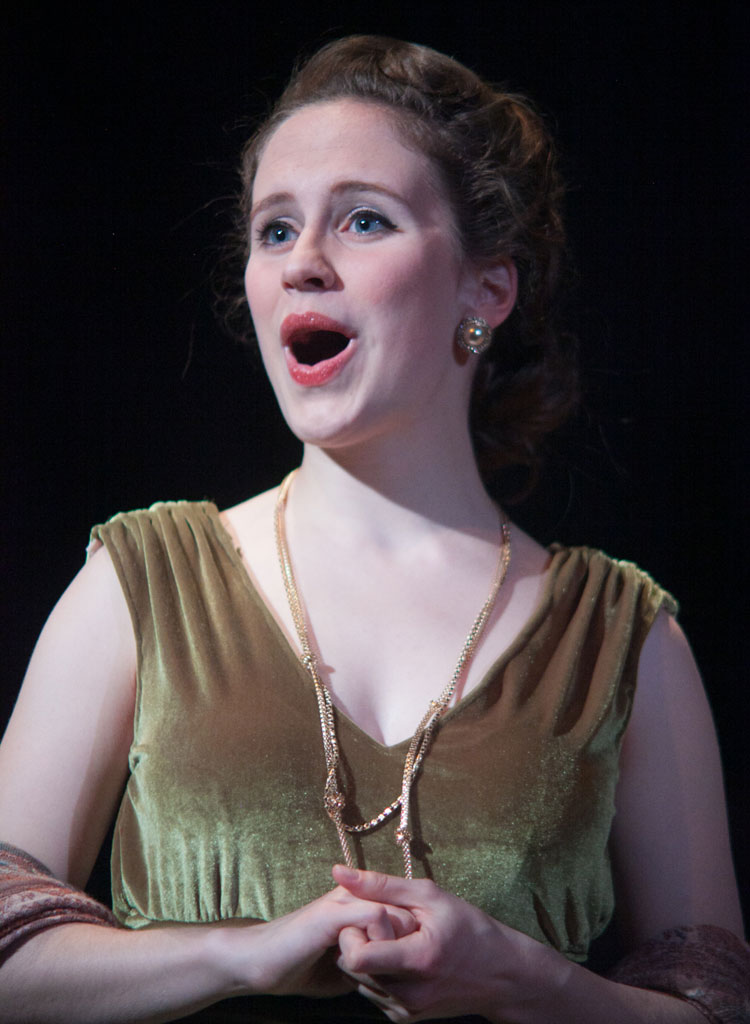 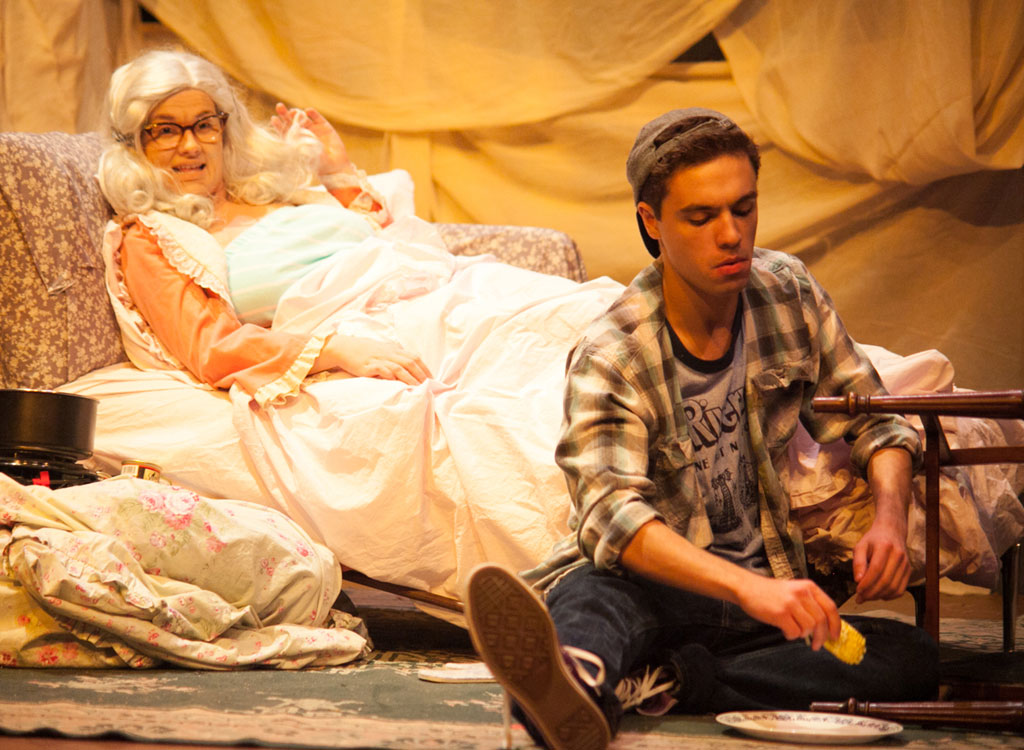 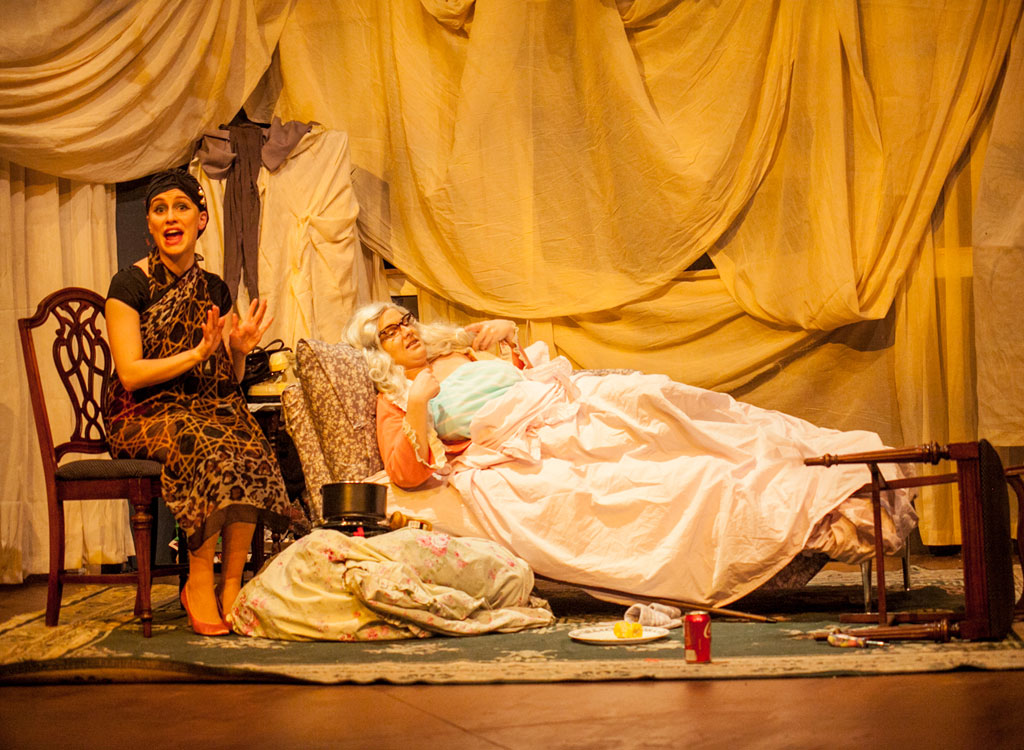 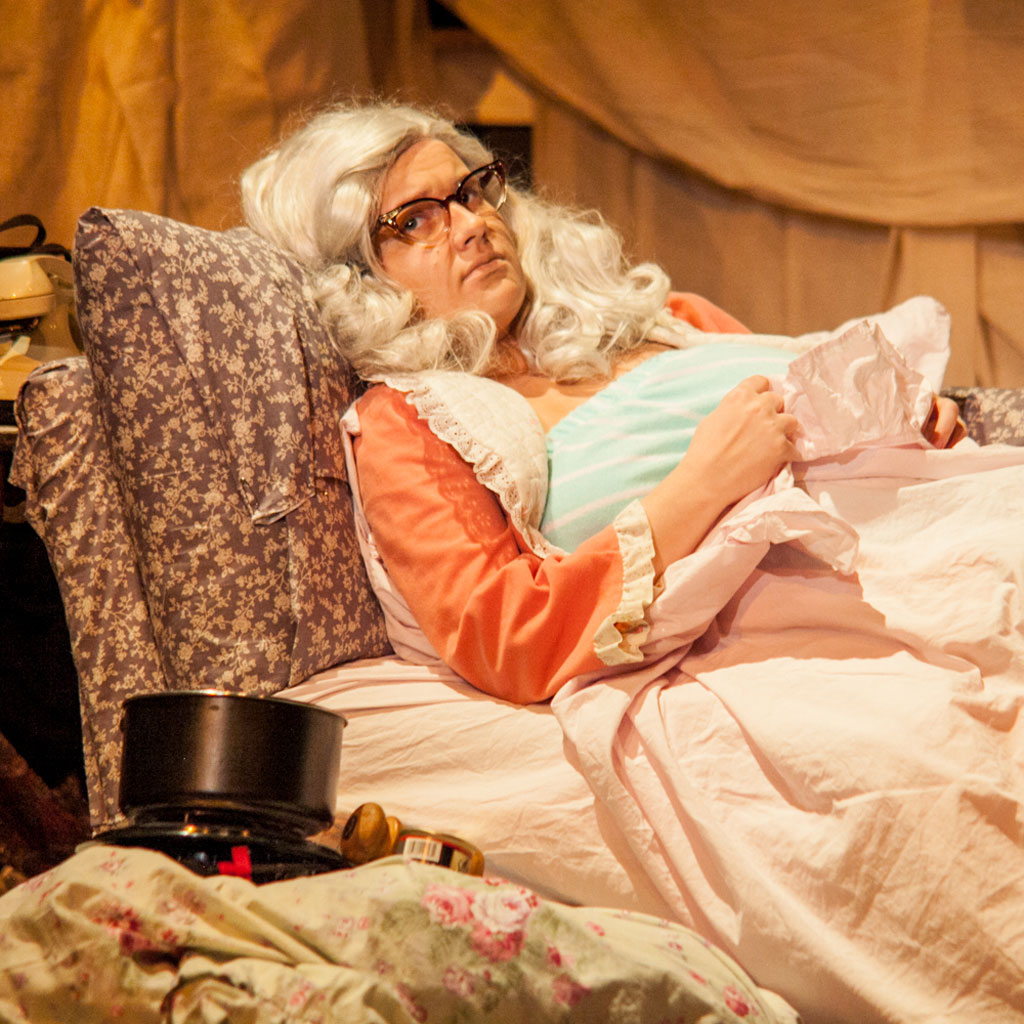 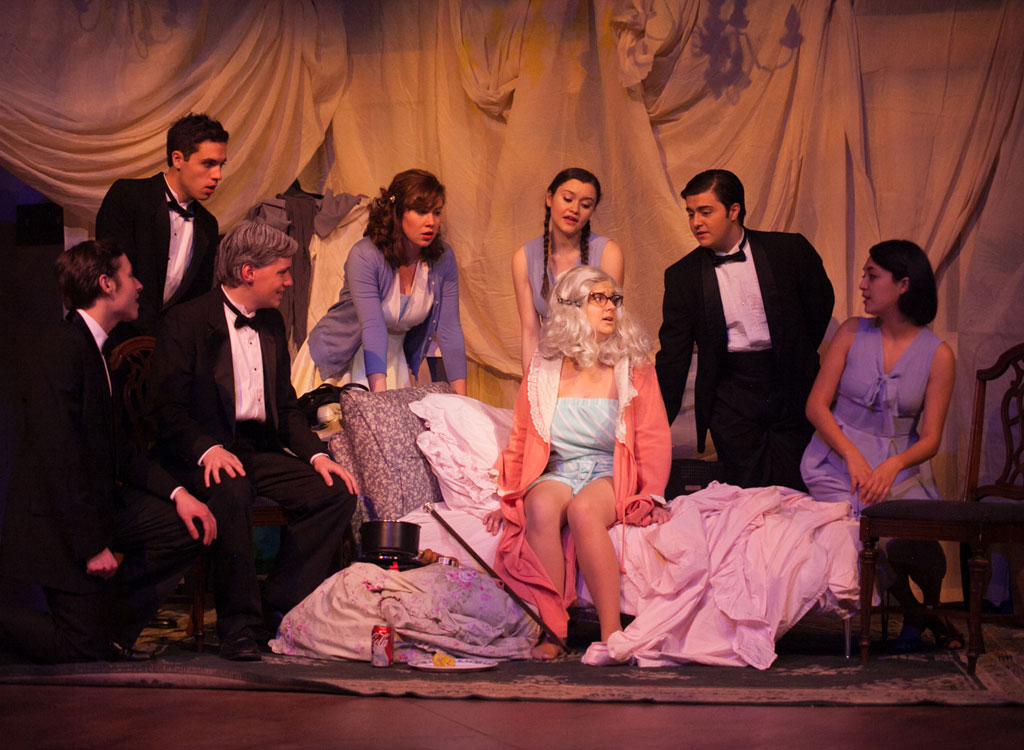 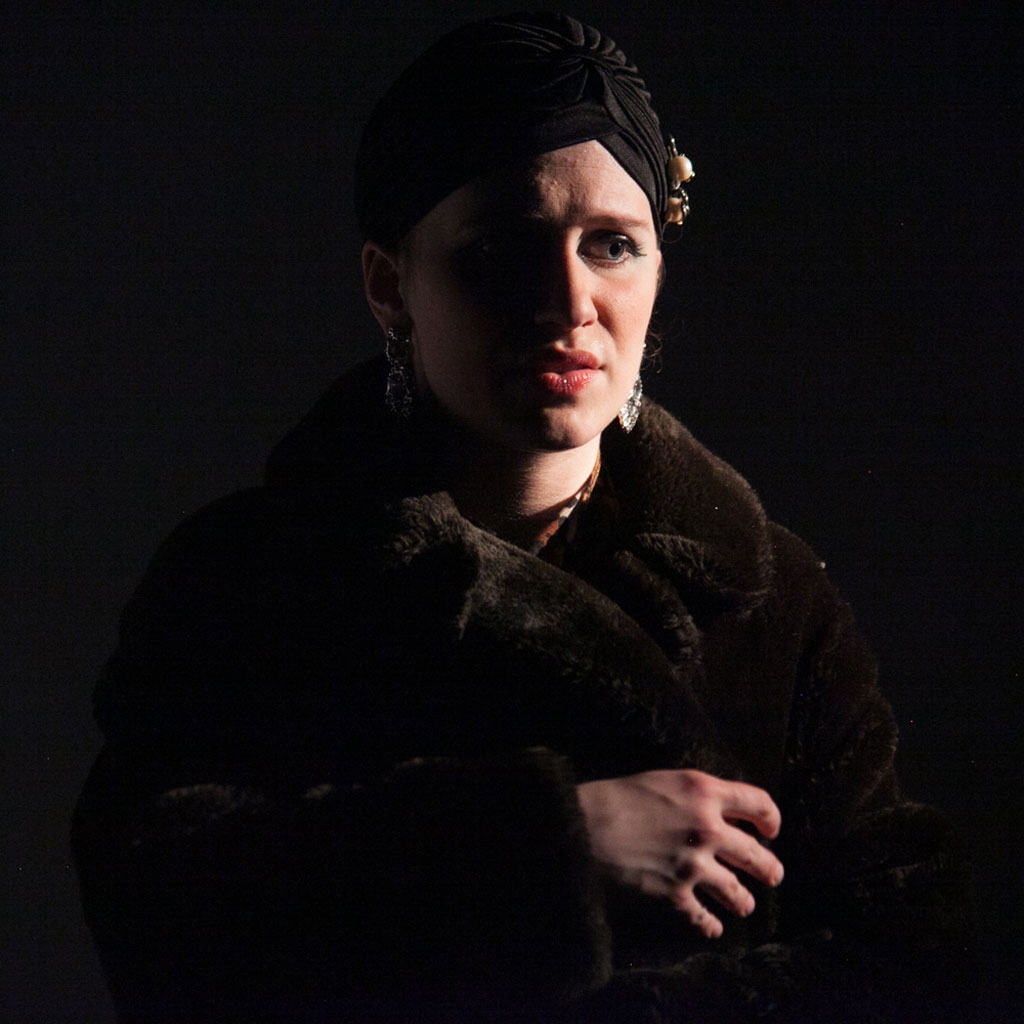 Once among the brightest names in the pre-Camelot social register, the deliciously eccentric aunt and cousin of Jacqueline Kennedy Onassis are now East Hampton’s most notorious recluses. Facing an uncertain future, Edith Bouvier Beale and her adult daughter, 'Little' Edie, are forced to revisit their storied past and come to terms with it – for better, and for worse.

Nora Bingham ("Little" Edie Beale/Edith Bouvier Beale) is a fourth-year Spanish major/TAPS minor in the College. She has perviously performed in Into the Woods (Jack's Mother/Cinderella's Mother), Much Ado About Nothing (Dogberry), Reefer Madness (Sally), The River Jordan: A Victorian Circus Tale (Fortunata), Principia Circusatica (The Electron), and 8 New Work Week productions. She has also been a makeup and assistant costume designer on The Violet Hour and The Lion in Winter.

Hilary Clifford (Young "Little" Edie Beale) is a fourth-year Religious Studies and Fundamentals: Issues and Texts double major. She has previously appeared in Proof (Claire), and recently served as the Assistant Props Master for The House of Yes. She is the Chair of the University Theater Committee, and will forever be a proud member of the 25th Generation of Off-Off Campus.

Nicholas Sidoran (George Gould Strong) is a second-year TAPS major and is thrilled to be playing George Gould Strong in his first University Theater production! He has spent the majority of his of time singing with Voices in Your Head and is glad to return to his performing roots in musical theatre. Some past roles include Adam in Children of Eden, Matt in The Fantasticks, and Albert in Bye Bye Birdie.

Elisabeth Del Toro (Edith Bouvier Beale) is a second-year TAPS/Spanish major. Previous Acting roles include The House of Yes, ALICES: Adventures in Wonderland, and The Drowsy Chaperone. She was also a stagehand for Henry VI, the Assistant Sound Designer for The Glass Menagerie, and has participated in three Theater[24] festivals. In addition she serves on UT Committee. She is excited for her first time not worrying about how attractive the costumes make her look.

David A. Tomblin (Brooks, Sr./Brooks, Jr.) is a second-year Psychology major in the College. His previous performances with University Theater include the Baker in Philip Glass Buys A Loaf of Bread and as part of the chorus in The Drowsy Chaperone. He assistant directed the Le Vorris and Vox show, Principia Circusatica, and has performed with the Hyde Park Community Players in their production of Oedipus! The Musical!

Louise Simpson (Lee Bouvier) is a first-year in the College looking to pursue a career in broadcast journalism. This is her first University Theater production.

Adam Johnson (J.V. "Major" Bouvier) is a first-year prospective Biochemistry major. This is his first show with University Theater.

Michael Findley (Joseph Patrick Kennedy, Jr./Jerry) is a second-year in the College. He assistant directed Hedda Gabler earlier this season and has previously appeared in The Drowsy Chaperone and The Real Thing with University Theater.

Éamon Boylan (Director) is a third-year majoring in English Literature and TAPS. With University Theater, he has directed The Glass Menagerie, This Property is Condemned, A Monologue from The Taming of the Shrew, and assistant directed The House of Yes. Also with University Theater, he has acted in Reefer Madness (Lecturer), Henry VI (Warwick), What I Meant Was (Fritzie) and worked as a dramaturg on The Merchant of Venice. He also has written and directed for New Work Week and co-curates the quarterly Theater[24] festival, in which he has performed many times. At Logan he works in the Box Office and with TAPS he serves as Front of House Manager North.

Vanessa Farrante (Stage Manager) is a second-year in the College. She has assistant directed last fall's production of The Glass Menagerie and was also the stage manager of last winter's Weekend of Workshops (ALICES: Adventures in Wonderland).

Alexander Wikstrom (Music Director) is a third year Geography major who has previously done music-related work with Off-Off Campus and has acted in New Work Week.

Sammi Wreschner (Lighting Designer) is a third-year Computer Science major in the College. She has worked in lighting for five University Theater shows, including designing the lights for The Two Gentlemen of Verona.

Li Wang (Sound Designer) is a second-year in the College. He worked as assistant sound designer in This is Our Youth in the fall quarter of his first year. He is extremely into theater sound designing and currently also works on campus as theater tech staff for ORCSA.

Hanna Petroski (Props Designer) is a third-year Environmental Studies major in the College. She has previously appeared in past shows by Le Vorris and Vox Circus and also stage managed last quarter's workshop of A Monologue from The Taming of the Shrew.

Jamie Mermelstein (Dramaturg) is a fourth-year TAPS and English major in the college. This is her first experience dramaturging, but she has worked on ten previous University Theater productions as a stage manager, production manager, director, and designer. She has also worked with Ars Nova, About Face Theater, Teatro Vista, Court Theatre, and MCA Stage.

Julia Bodson (Choreographer) is a second-year Statistics major in the College. This is her first University Theater production.

Tiffany Wang (Master Electrician) is a first-year in the College. This is her first University Theater production so she's equal amounts excited and nervous!

Sarah Kim (Assistant Director) is a first-year undecided major in the College. This is her first University Theater production. She is thrilled to be a part of this wonderful show.

Natalie Wagner (Assistant Stage Manager) is a first-year in the College. She was the assistant stage manager for this quarter's production of Hedda Gabler and was a designer during Theater[24].

Isabel Sen (Assistant Production Manager) is a fourth-year majoring in Public Policy Studies in the College, and a member of the University Theater Student Committee. Among other roles, she has most notably served as Stage Manager (Reefer Madness) and Dramaturg (The Violet Hour, The Glass Menagerie), and is also one of the curators of the quarterly Theater[24] festival.

Rebecca Mak (Assistant Production Manager) is a second-year International Studies major in the College. Grey Gardens is the first (and best!) theater production that she's worked on.

Michael Roy (Assistant Lighting Designer) is a second-year Chemistry major. This is his first production on staff, but he's looking forward to getting more involved in the future.

Sasha Ayvazov (University Theater Committee Liaison) is a third-year English and Math major. He has been a part of some twenty-odd shows at UChicago, with University Theater, Attori Senza Paura, Le Vorris and Vox, and CES. He is a member of University Theater committee, a curator for Theater[24], and is directing The Clean House, the 8th week University Theater show next quarter. In his free time, he likes long walks on the beach and wondering why he does so much theater.