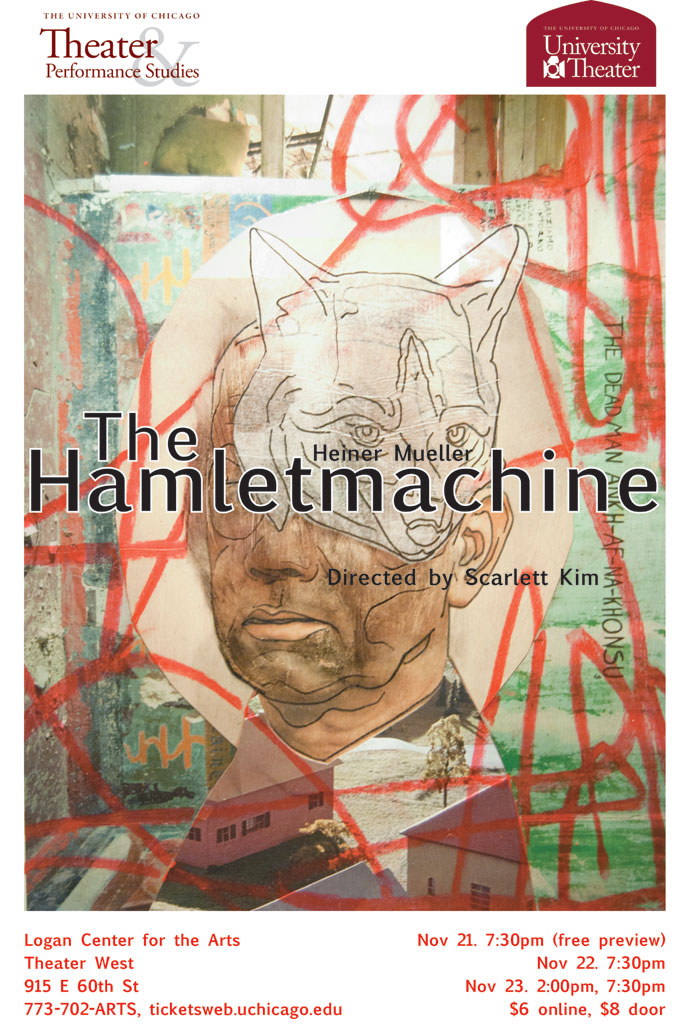 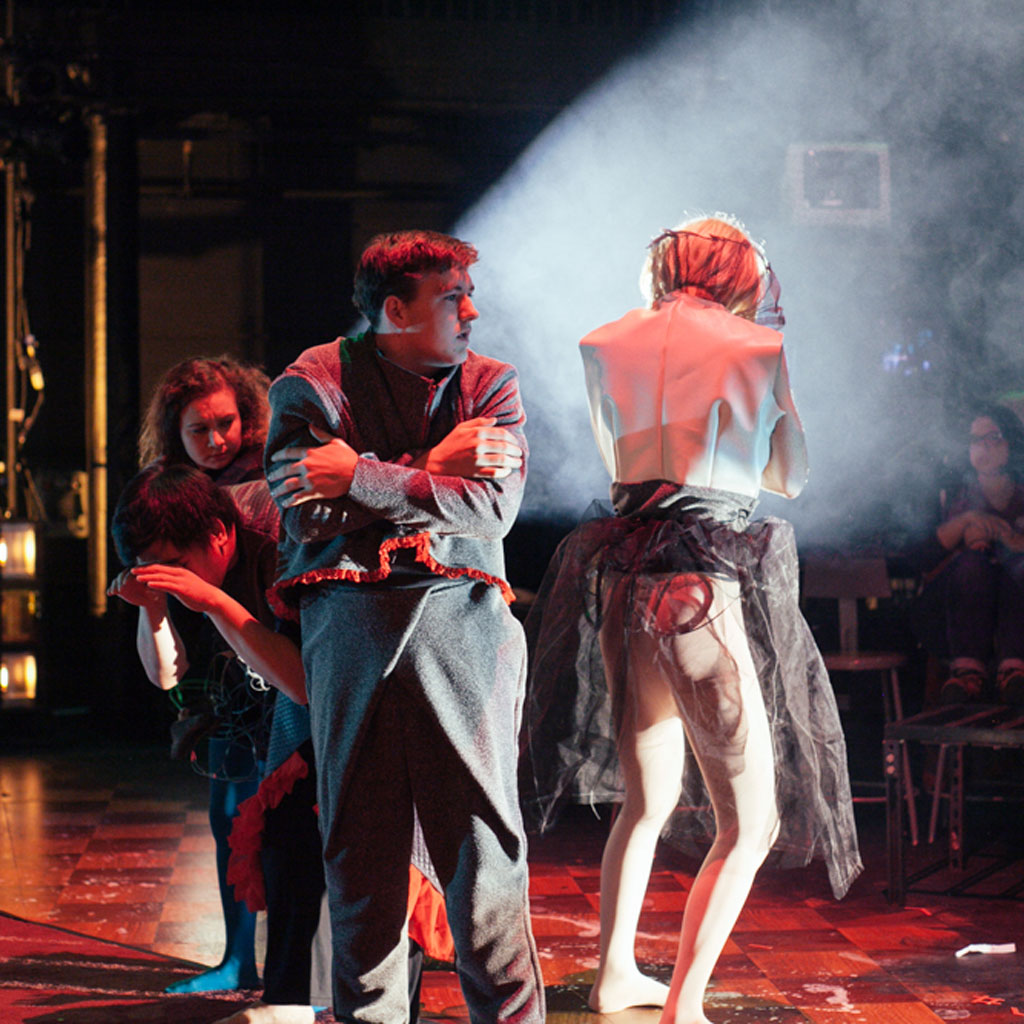 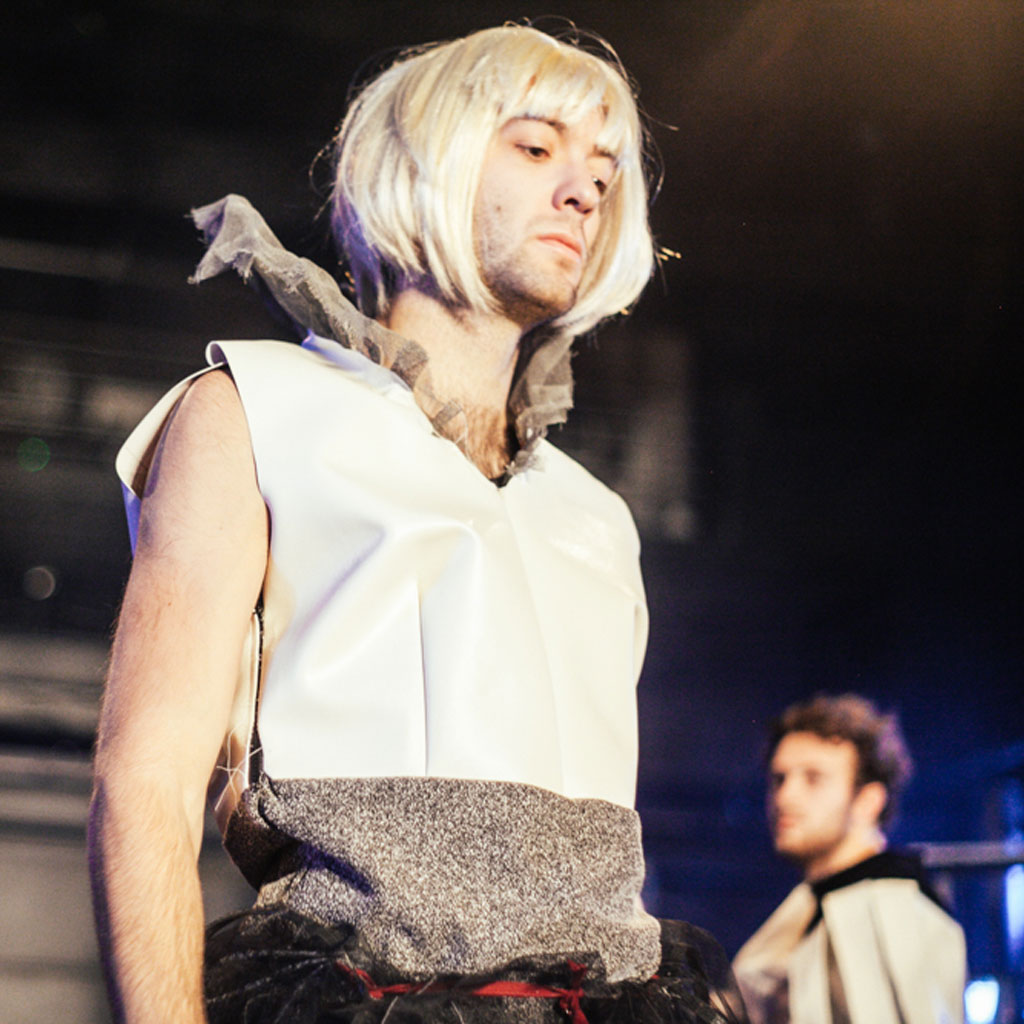 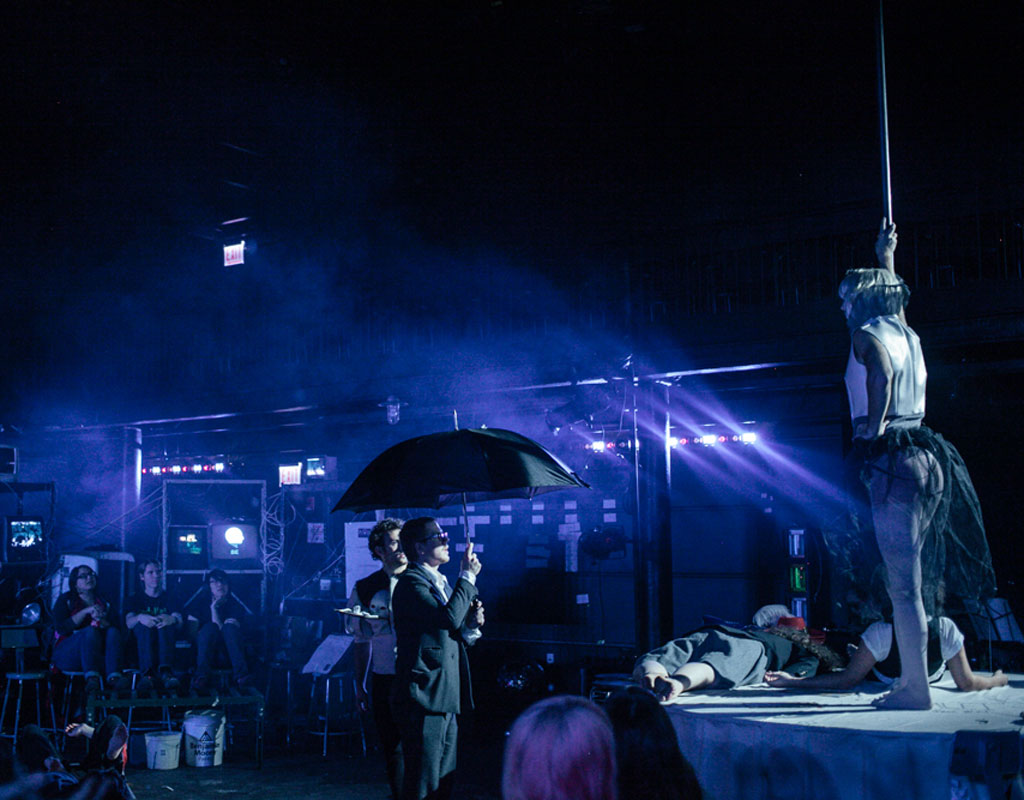 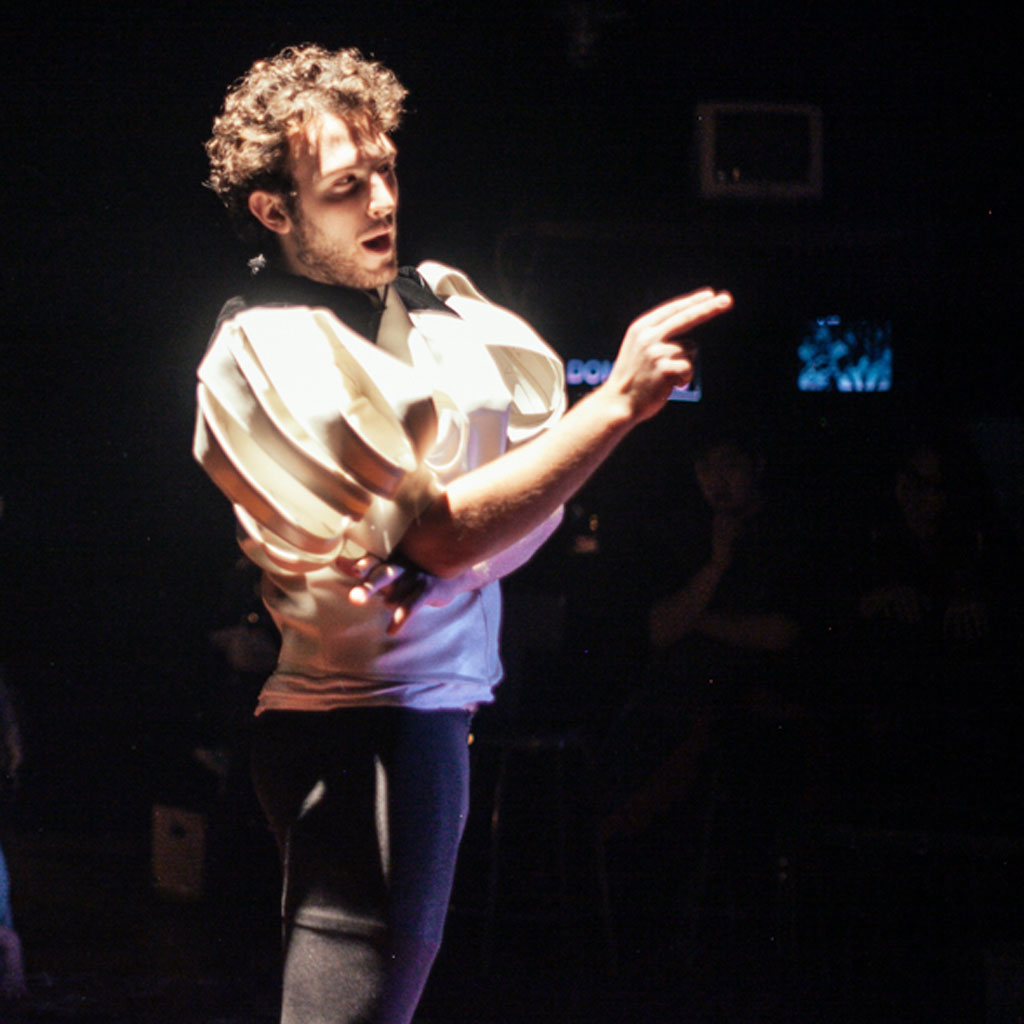 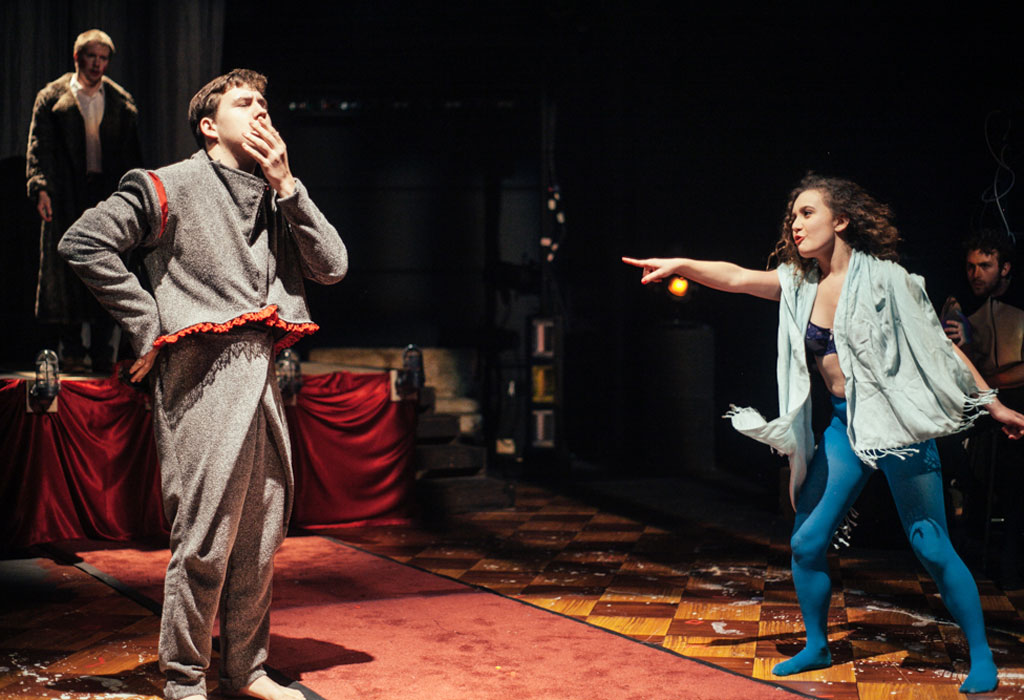 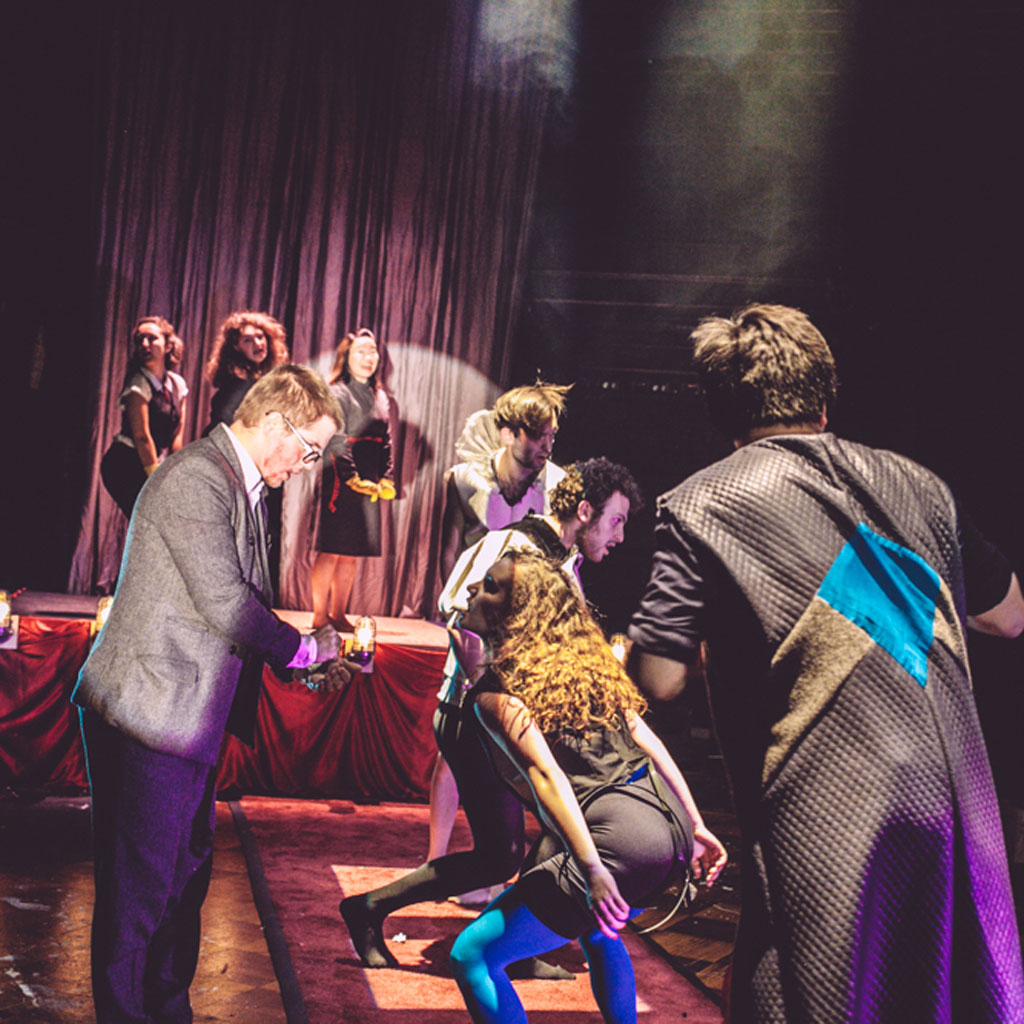 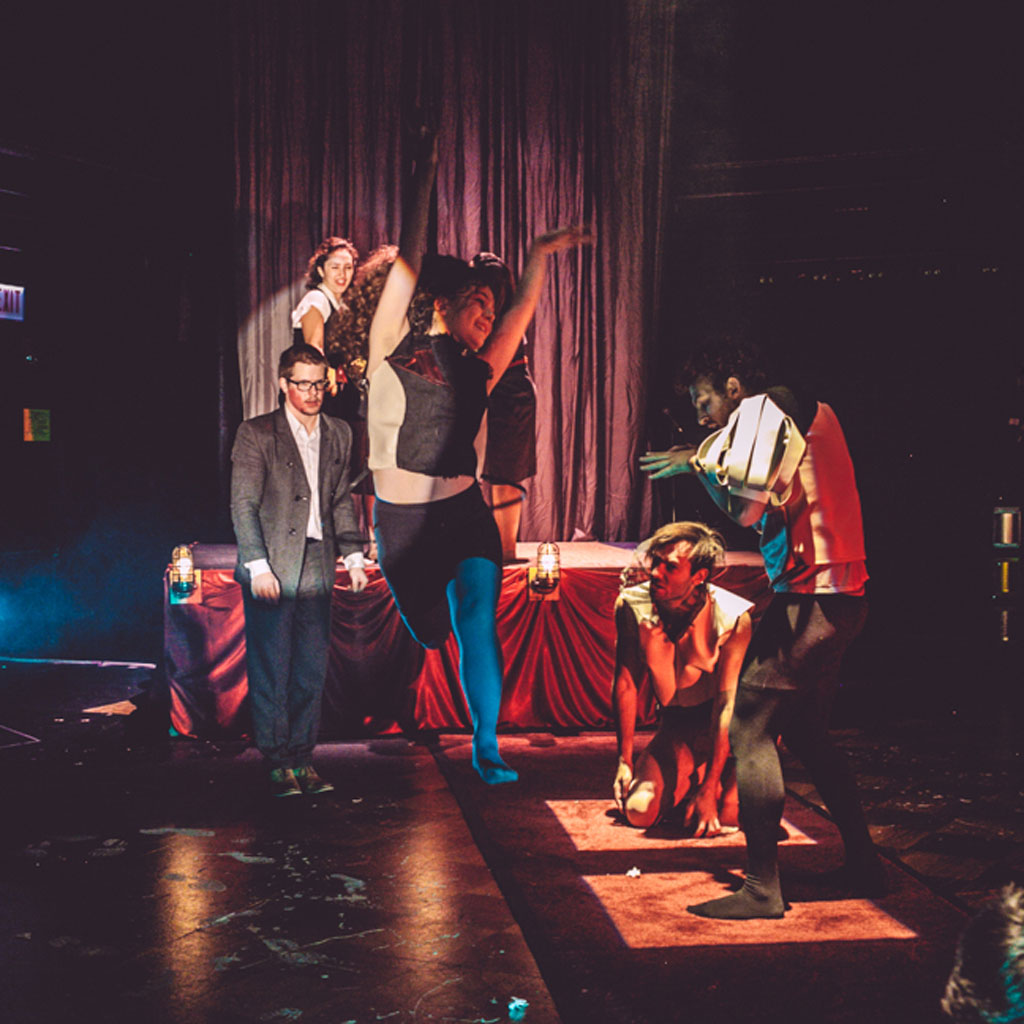 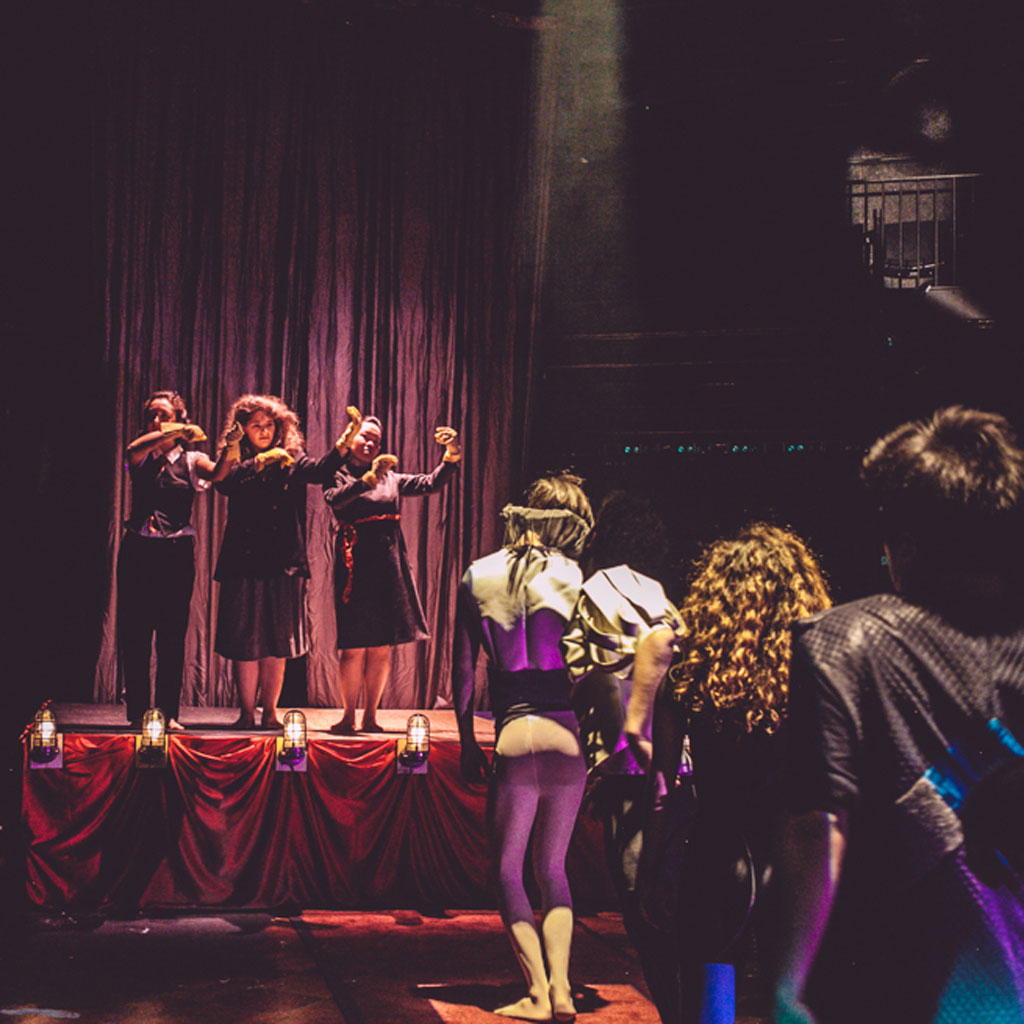 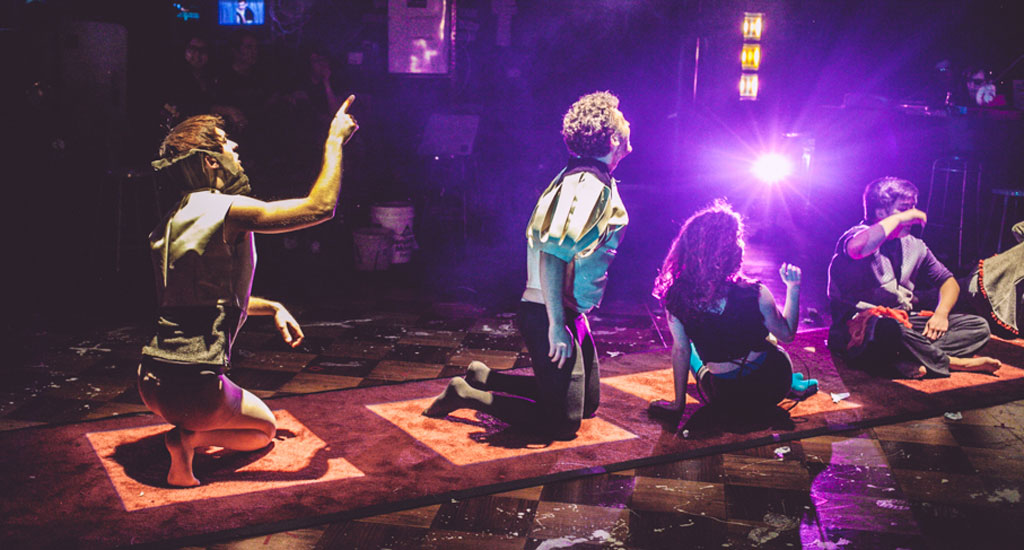 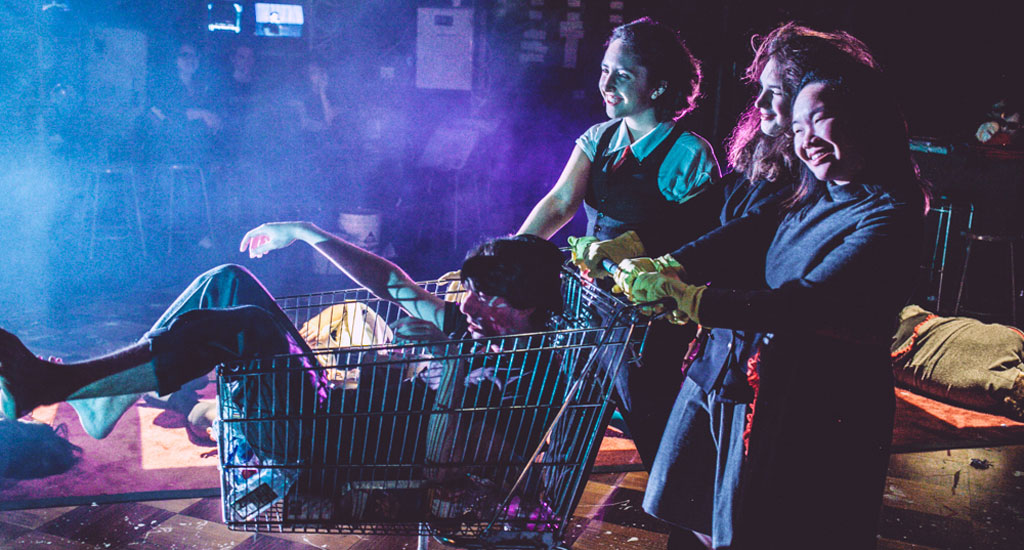 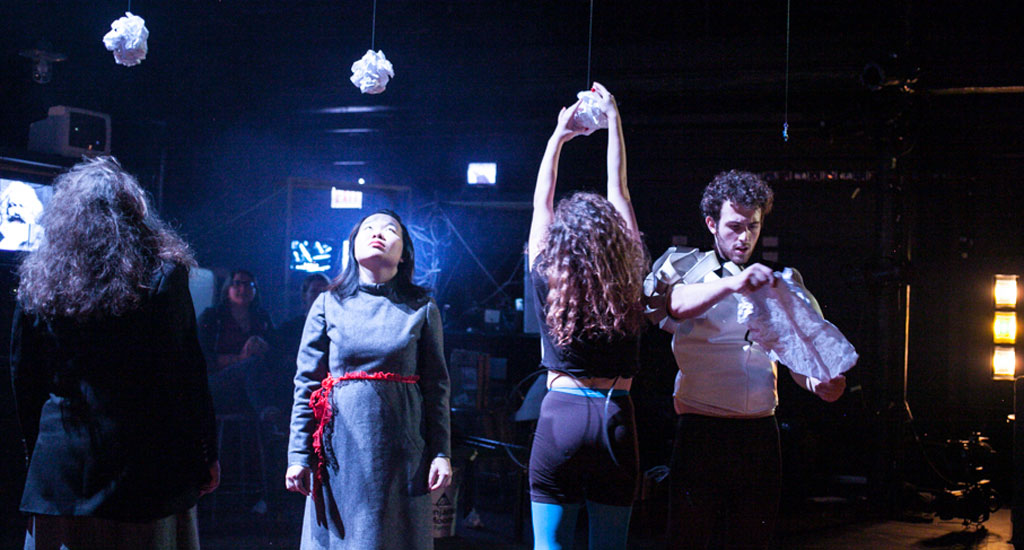 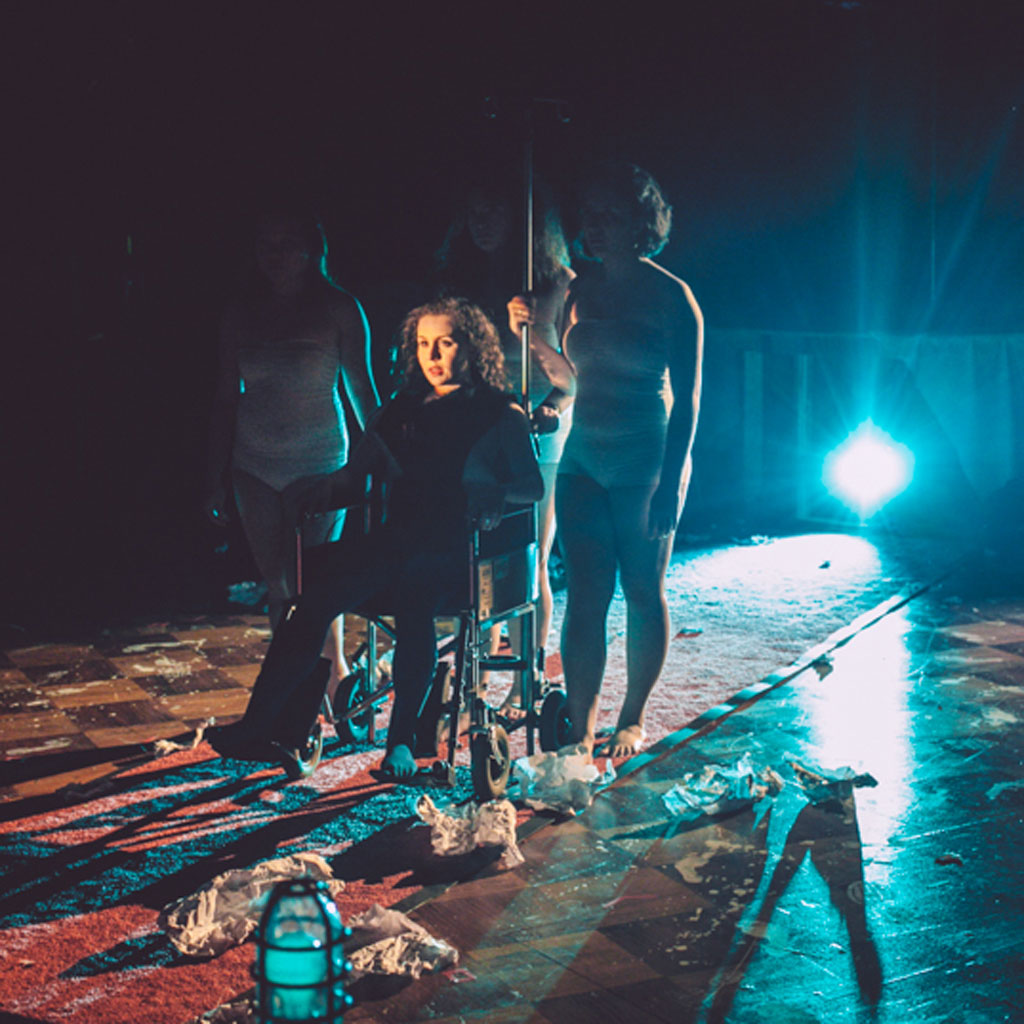 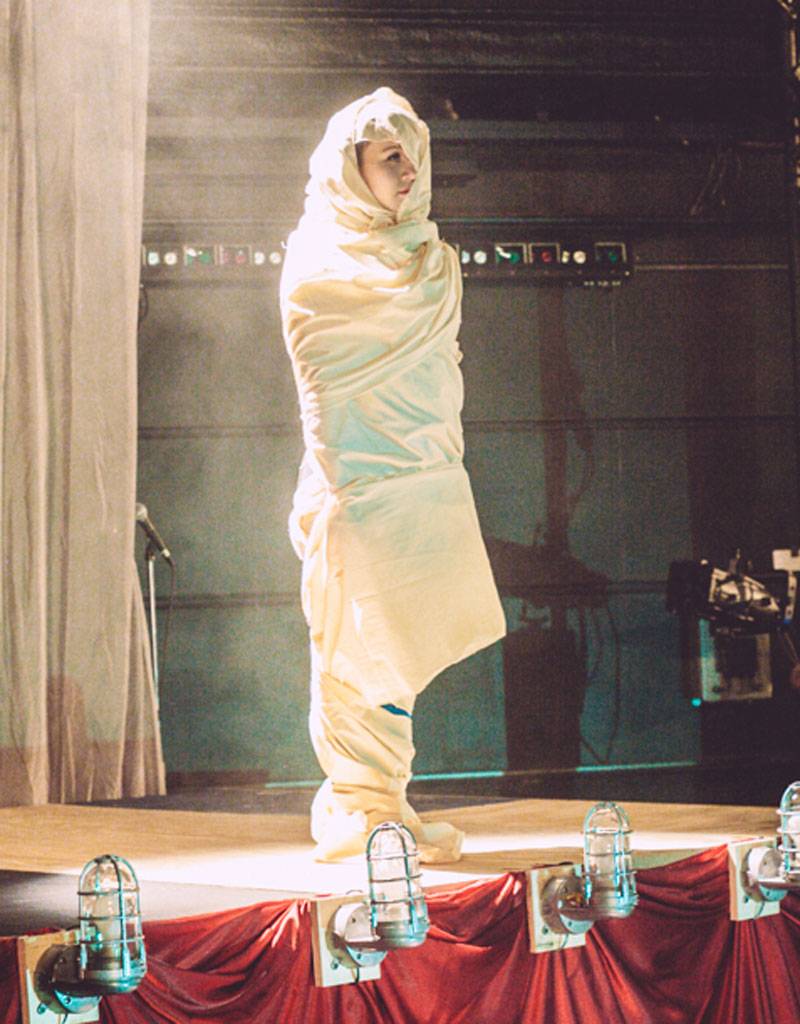 Shakespeare's masterpiece struggles to survive amidst the mounting rubble of literary and political history. Failed ideals and human disillusionment give way in Hamletmachine to the youth clamoring in reaction against the past in order to change the present. To break free of the continual cycle of violence within history the past is questioned and deconstructed. Moving away from psychological narrative, Hamletmachine creates a landscape of the betrayed revolution. This performance is an exploration into the place of theatre as a sight of revolutionary change. In Müller's words, "the slogan of the Napoleonic era still applies: Theater is the Revolution on the march."

Michael Reinhard (Müller/Horatio) is a BA/MA student in English and the Humanities. He has previously appeared in Henry VI (Somerset), Commedia (Pantalone), and also directed an adaptation of the Spoon River Anthology.

Alessio Franko (The Actor Playing Hamlet) is a fourth-year Cinema and Media Studies major and German minor in the College. He has studied acting at HB Studios in New York, where he is from. At UChicago he has performed in Cymbeline (Cornelius), The Violet Hour (Gidger), OEDIPUS (Oedipus), Crime and Punishment (Porfiry), and Life is a Dream (Basilio).

Stephanie Litchfield (Ophelia-Hamlet) is a third-year TAPS and Comparative Literature double major in the college. Previous UT credits include The Real Thing (Debbie) and The Vagina Monologues (V-Squad). She has also performed with the Hyde Park Community Players (Strains of Triumph - Ann) and with the LaSalle Street Theater (Love Labour's Lost - Katherine).

Gabriel Garey Levine (Ghost-Hamlet) is a first-year prospective Neuroscience and English double-major in the College. This is his first UT show. Non-UT credits include Curtains (Lt. Frank Cioffi), Diary of a Madman (Aksentii Poprishchin), and Romeo & Juliet (Romeo).

Derek Spencer (Gertrude-Hamlet) is a fourth-year Philosophy and Public Policy double major. He has previously appeared in last quarter's Merchant of Venice (The Duke). Outside of theater, Derek also writes and plays music, brews beer, and is a brother of Phi Delta Theta fraternity.

Kyle Yeh (Polonius-Hamlet) is a first-year prospective Linguistics major in the College. This is his debut role in UT.

Alexandra Levitas (Karl Marx) is a third-year Anthropology and TAPS double-major. She has previously worked with Le Vorris & Vox student circus and performed as a trapeze artist and acrobat in 5 of their productions, including Principa Circusatica (Winter 2012) and The Rockefeller Big Top (Spring 2013). She has also acted as one of the princesses in the workshop 12 Dancing Princesses (Winter 2012). This is her first mainstage production.

Scarlett Kim (Director) is in her third year of pursuing a TAPS and Visual Arts double major and Creative Writing minor. She has previously directed Hotel Nepenthe and 4.48 Psychosis, and performed in The House of Yes (Mrs. Pascal), reWILDing Genius (Lilly), and The Vagina Monologues with UT. She has also directed 'Tis Pity She's a Whore and performed in Coriolanus (Brutus) and Beowulf (Beowulf) during her two years at the College. She also devised Moksori/Voice for Chicago Fringe Festival, performed as a marionette in the transmedia game The Project, apprenticed with Bread and Puppet Theatre and trained in mask making and performing at Dell'Arte School. She is currently the casting/education intern at Court Theatre. Upcoming projects include scenic designing for Godspell, assisting the directors Charles Newell on M. Butterfly at Court Theatre, and Halena Kays on the spring circus pro-show. Scarlett’s work centers around devising multimedia installations focusing on performance.

Ben Sulser (Stage Manager) is a second-year Evolutionary Biology major in the College. He is excited to be stage managing once again with UT, where he has previous experience with stage management (Hotel Nepenthe) and as a member of Tech Staff. He has also acted in CES' production of 'Tis Pity She's a Whore (Bergetto).

David Goodman-Edberg (Lighting Designer) is a second-year TAPS major in the college. He has designed lighting for a number of shows with UT, CES, and various dance groups on campus. He has also worked as a freelance designer and electrician around Chicago, most recently designing for the Dance Chicago 2013 Dance Slam. He coordinates lighting for events in the Logan Center Performance Hall as well.

Ivan Pyzow (Composer/Music Director) is a third-year Mathematics major in the College. He has previously appeared in The Physicists (Mobius). He composed music for Le Vorris & Vox (The River Jordan) and for the Classical Entertainment Society (Beowulf). He currently directs the Dirt Red Brass Band.

Trevor Ly (Costume Designer) is a third-year Philosophy and Mathematics major in the College. He previously did general design work on Beowulf and 'Tis Pity She's a Whore. He also participated in MODA's Designer Boot Camp program, class of 2013.

Lilly Lerer (Scenic Designer) is a fourth-year student studying Comparative Human Development and History and Philosophy of Science (HIPS). She has designed set and acted in several University Theater and CES productions, including Hotel Nepenthe, 4.48 Psychosis and Beowulf.

Jamie Mermelstein (Props Designer) is a fourth-year TAPS and English major in the College. She has previously worked with UT as a stage manager, production manager, director, and dramaturg. She has also worked with Ars Nova, About Face Theater, Court Theater, Teatro Vista, and MCA Stage.

Alessio Franko (Video Designer) is a Media Studies senior in the College. This is Alessio's second collaboration with Scarlett Kim after doing sound design for last Winter's Hotel Nepenthe. He also directed last Fall's Doctor Who-themed Shakespeare workshop. Alessio works on editing-based video art as well as Televisual forms such as Sitcom. He is from California.

Dan Cronin (Dramaturg) is a third-year English Language and Literature major in the College with a focus on Creative Writing. He previously served as an Assistant Dramaturg for The Drowsy Chaperone and Hotel Nepenthe.

Kevin Freese (Master Electrician) is a second-year Math and Computer Science major. He has previously been ME for The Credeaux Canvas and The Drowsy Chaperone for UT. He would like to thank his crescent wrench, Ralph, for his continued success.

John Xia (Master Carpenter) is a fourth-year in Physics. He has previously helped build sets for The Violet Hour, Reefer Madness, The Lion in Winter, and The Two Gentlemen of Verona.

Alexandra Garfinkle (Assistant Production Manager) is a third-year in the College, majoring in English and Russian Studies. This is her fourth UT credit.

Lauren Eames (Assistant Lighting Designer) is a first-year in the College interested in majoring in Religion and Physics with a focus in Astronomy and Astrophysics. She has previously designed for Theater[24]. This is her first UT production and she's very excited!

Noah Kahrs (Apprentice Music Director) is a first-year undergrad planning on majoring in Music and Mathematics. He was previously assistant sound designer for Hedda Gabler.

Julia Santha (Assistant Props Designer) is a second-year at the College double-majoring in TAPS and Law, Letters and Society. She has previously worked on UT shows as an assistant director, assistant set designer, and director.

Bianca Eugene (Assistant Props Designer) is a second-year International Studies major in the College. This is her first production with University Theater.

Amy Yin (Assistant Scenic Designer) is a first-year student in the College. This is her first time involved in a UT production as an assistant scenic designer.

Jamie Keener (Assistant Scenic Designer) is a first-year English major in the College, and this is her first time participating in a University Theater production.

Sara Ruiz (Assistant Dramaturg) is a third-year Slavic Languages and Literatures major in the College. This is her first time getting involved with UT, but she hopes to continue!