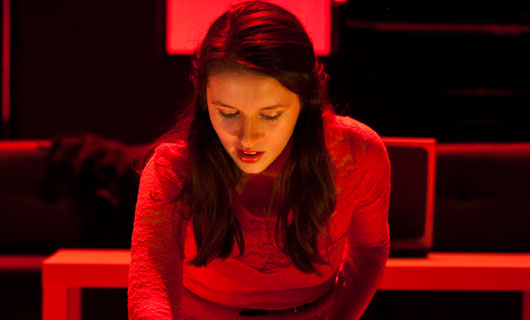 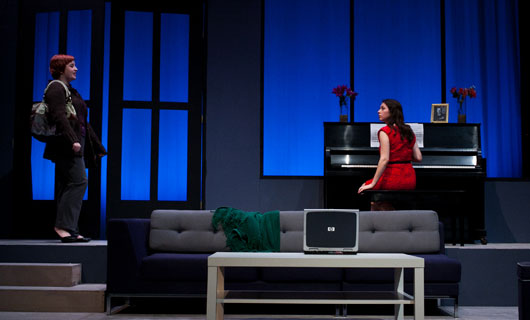 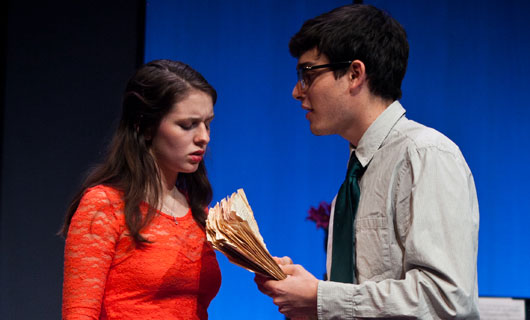 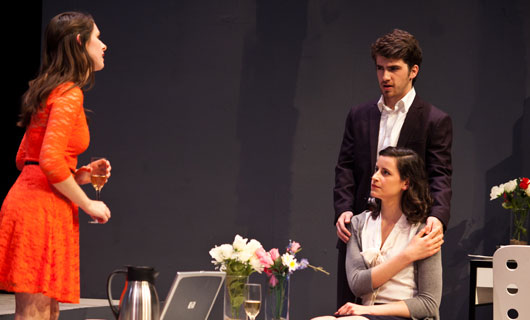 At the center of the play is one of the greatest roles in modern drama, the fascinating Hedda Gabler, who finds herself stranded in a seemingly ordinary but dangerously imbalanced domestic system. It includes her husband, the ambitious scholar George Tesman, his doting Aunt Julie and the powerful Judge Brack, who seems intent on playing a very large role in the young couple's life. Into this mix comes an old schoolmate of Hedda's, Thea Elvsted, who has courageously abandoned a loveless marriage in favor of the passionate partnership she has found with the troubled Eilert Lovborg, a brilliant thinker who is an academic rival of Tesman's and who shares an intense secret history with Hedda. Employing methods that virtually defined the modern psychological drama, Ibsen stealthily reveals the bitter conflicts and thwarted longings that lie just below the "civilized" transactions of daily life.

Eleanor Clifford (Hedda Gabler) is a second-year Psychology major in the College. She is a member of University Theater Committee and has previously appeared in Henry VI (Rutland), Winter 2012 Workshops, and The Real Thing (Annie). Last spring, she directed the workshop First Love.

Thomas Meerschwam (George Tesman) is a first-year student in the College. He is currently undecided about his major. This is his first University Theater production.

Lexi Turner (Aunt Julia) is a first-year student in the College. She tenuously plans to major in TAPS and a yet to be determined second major. This is her first appearance in a University Theater production.

Lizzy Lewis (Thea Elvsted) is a fourth-year Comparative Literature major. Her UT acting credits included The House of Yes (Jackie-O), This Property is Condemned (Willie), Much Ado About Nothing (Hero), and Into the Woods (Cinderella). She has also costume designed and is the Secretary of the Dean's Men Board.

Christopher Deakin (Eilert Lovborg) is a third-year majoring in Theater and Performance Studies. He has previously appeared in The House of Yes (Marty), The Glass Menagerie (Tom), and The Lion in Winter (John).

Ellie Smith (Berta) is a first-year prospective Political Science and History double major. She is very excited to be acting in her first UT show.

Tess Drummond (Stage Manager) is a fourth-year in the College and a French/TAPS double-major. Her previous work as Stage Manager includes Hamlet, The Homecoming, True West, Proof, and The Glass Menagerie with University Theater, as well as serving as an Assistant Stage Manager for Sketchbook: Reincarnate (Collaboraction Theater Company). She is also a Curator of UChicago's Theater[24] Festival, and has stage managed five productions with them.

Andrew MacKie-Mason (Lighting Designer) is a fourth-year Math and Philosophy major. He has previous designed lights for The Merchant of Venice, The Credeaux Canvas, Cymbeline, and The Violet Hour.

Sara Lu (Sound Designer) is a third-year majoring in Biology and Music. She has been involved in sound since high school, and with UT she has sound designed The Drowsy Chaperone, The Credeaux Canvas, This Is Our Youth, Reefer Madness, The Homecoming (assistant), and An Actor Prepares (assistant).

Quinn Georgic (Props Designer) is a second-year in the College and is a French and International Studies major. Last year he worked on The Credeaux Canvas (Asst. Director). He looks forward to doing more UT productions in the future.

Hannah Nyhart (Dramaturg) is a third-year Political Science major in the College. She remains unclear on the pronunciation and various forms of the word dramaturg.

Lauren Saunders (Costume Designer) is a second-year Physics major in the College.  She previously designed costumes for The Credeaux Canvas, and has been seen onstage in Theater[24] and CES's 'Tis Pity She's a Whore (Philotis).

Benjamin Heller (Production Manager) is a fourth-year Political Science major. He has production managed several shows with University Theater and is the organization's treasurer.

Samuel Giddins (Master Electrician) is a first-year Economics and Computer Science major in the College. This is his first UT show.

Jacob Mulcahy (Master Carpenter) is a third-year Physics major in the College. He has previously worked as an assistant set designer/carpenter for This Is Our Youth and The Merchant of Venice.

Michael Findley (Assistant Director) is a second-year undecided major in the College. He has previously appeared in The Drowsy Chaperone (Robert), The Real Thing (Max), and will be performing in Grey Gardens this fall.

Natalie Wagner (Assistant Stage Manager) is a first-year student in the College. Other than Theater[24], for which she was a designer, this will be her first UT production.

Ariela Subar (Assistant Lighting Designer) is a first-year in the College.  While she is undecided, she is sure that theatre and the visual arts will be a part of her extracurricular and academic journey throughout these next four years.  While this is her first experience with UT, she is already enthralled with the space and the people, and can't wait for all the productions to come.

Claire Haupt (Assistant Production Manager) is a first-year Anthropology/Political Science major in the College. This is her first show with University Theater.

Noah Kahrs (Assistant Sound Designer) is a first-year undergrad intending on majoring in Music and Mathematics.  Despite having composed music for years and despite a longstanding fascination with the nature of sound design, this is his first direct involvement with theater.

Itzel Blancas (Assistant Costume Designer) is a first-year pre-med English major in the College.  She is excited to be making her University Theater debut with the Hedda Gabler team.