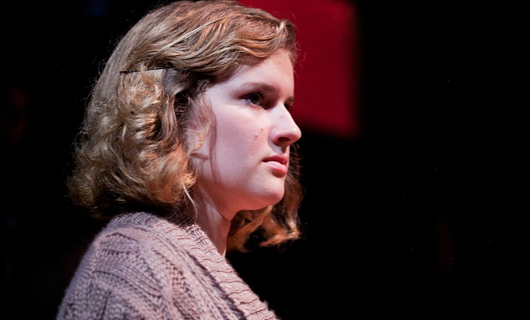 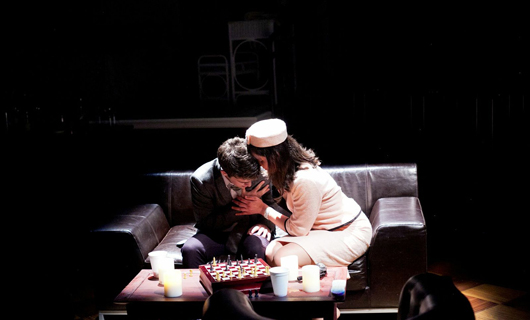 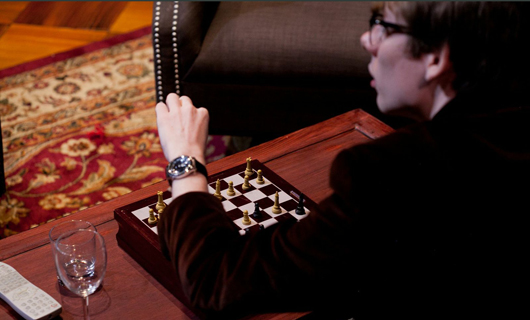 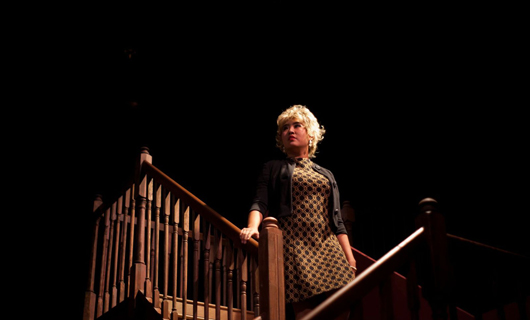 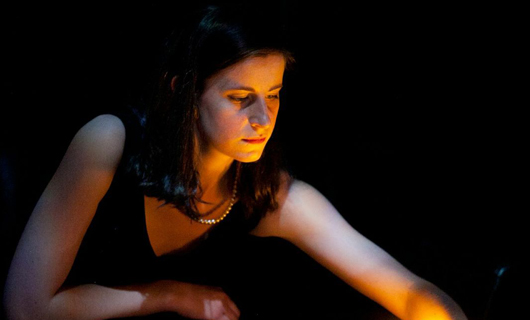 It's Thanksgiving, and Marty's arrival home is greatly anticipated by his mother, Mrs. Pascal, his twin sister, Jackie-O, and his younger brother, Anthony. He arrives during a hurricane, but worse than the storm is the fact that Marty brings Lesly, his fiancée. This ruins everything. Marty's engagement is a threat to the well-being of this family and a greater threat to Jackie-O, who has always wanted her brother for herself. On top of that, Jackie-O has just recently been released from a mental hospital, Anthony dropped out of Princeton, and their mother has a serious problem handling any of this. This is also a family severely affected by the Kennedy family, whose Virginia Compound makes them neighbors with the Pascals.

Lizzy Lewis (Jackie-O) is a fourth-year majoring in Comparative Literature, studying Music and French lit. Previous UT acting credits include The Credeaux Canvas (Tess), Into the Woods (Cinderella), Much Ado About Nothing (Hero), Reefer Madness (Ms. Placard), and This Property is Condemned (Willie). She was the costume designer for The Lion in Winter and the asst. costume designer for The Violet Hour. She hopes you enjoy the show!

Christopher Deakin (Marty) is a third-year studying Theater and Performance. He has appeared in productions for both University Theater and the Dean's Men, including The Glass Menagerie (Tom) and Twelfth Night (Sebastian).

M.C. Steffen (Anthony) is a third-year TAPS major in the College. He most recently appeared in UT's collaboration with The New Colony, reWILDing Genius (Adam). Later this quarter he will direct UT's workshop production of Smitten. He is also currently devising The (Colm) O'Reilly Factor, a series of plays originally produced by Theater Oobleck to be staged over the course of this upcoming year. The first part, a production of An Apology for the Course and Outcome of Certain Events Delivered by Doctor John Faustus on This His Final Evening, will go up finals week of this quarter—M.C. will co-direct and play the title role.

Scarlett J. Kim (Mrs. Pascal) is a third-year student studying Theatre, Visual Arts, and Creative Writing. At the University, she has directed Hotel Nepenthe, 4.48 Psychosis, and ‘Tis Pity She’s a Whore; performed in reWILDing Genius (Lilly), Vagina Monologues, Beowulf (Beowulf), Coriolanus (Brutus) and The Project: a transmedia game (Marionette). Also, recently she has studied mask making at Dell’Arte School, apprenticed with Bread and Puppet Theatre, and devised and performed Moksori/Voice with The Interpreters at Chicago Fringe Festival. Upcoming commitments include a casting/education internship at Court Theatre and directing The Hamletmachine with UT in the fall. Scarlett’s work centers around devising multimedia installations focusing on performance.

Audrey Francis (Director) has acted, directed and taught in Chicago for nearly 10 years. She is the co-founder and owner of Black Box Acting, home of The Studio and The Academy. Audrey is a graduate of the School at Steppenwolf, where she now returns to teach the Meisner Technique and Ensemble Scene Study. She is a Jeff Nominated actor who has worked with Steppenwolf, The Goodman, Victory Gardens, Writer's Theatre, Northlight, Pine Box Theater, The Hypocrites and many other Chicago theaters. She's appeared in multiple independent films and television shows, most recently including the NBC Network series ER and Chicago Fire. Audrey can also be seen on a new web series created by The Onion and two upcoming feature films; Dig Two Graves and Medal of Victory. In addition to acting and teaching, Audrey has also directed multiple productions in Chicago, most recently with Pine Box Theatre, Chicago Dramatists, Step Up Productions, and the University of Chicago. Audrey is a graduate of Colorado State University with a degree in Journalism.

Laura Hooper (Co-Director) is excited to be directing House of Yes at the University of Chicago. She is the proud Owner and Co-Founder of Black Box Acting, where she is an instructor for both The STUDIO and The ACADEMY training programs. She has taught at The School at Steppenwolf, Columbia College, and The High School for Performing and Visual Arts in Houston, Texas. Laura is an actor and director in Chicago and has directed productions for several theatre companies, including American Theater Company, Pine Box Theatre, The Women’s Theatre Alliance, and The Around the Coyote Festival. This Fall, she will be directing productions at both Wildclaw Theatre and Step Up Productions. She is a graduate of the School at Steppenwolf and the University of Texas at Austin, with a BA in Theatre and Dance. www.blackboxacting.com.

Éamon Boylan (Assistant Director) is a third-year majoring in English Literature and TAPS. With University Theater he has directed The Glass Menagerie, This Property is Condemned, A Monologue from the Taming of the Shrew, and is looking forward to direct Grey Gardens this fall. Also with University Theater, he has acted in Reefer Madness (Lecturer), Henry VI (Warwick), What I Meant Was (Fritzie) and worked as a dramaturg on The Merchant of Venice. He also has written and directed for New Work Week and co-curates the quarterly Theater[24] festival, in which he has performed many times. At Logan he works in the Box Office and with TAPS he serves as Front of House Manager North.

​Kathleen Cawley (Stage Manager) is a fourth-year English and TAPS double major. She has previously stage managed the Spoon River and Boston Marriage workshops. She has also acted (Adaptation) and directed (Hello Out There) for UT.

With over 100 productions to his name, Nathan R. Rohrer (Costume Designer) has been a successful theatrical costume designer in Chicago since 2007, where his costume designs have been seen in theatre and dance productions citywide. He has worked with numerous Chicago dance companies, having designed for Hubbard Street Dance Chicago, River North Chicago Dance, Thodos Dance Chicago, Deeply Rooted Productions, and many others. Nathan has also designed for such theatre companies as Lifeline Theatre, Griffin Theatre, New Colony, and Emerald City Theatre, and has also worked with Chicago Shakespeare Theatre, Marriott-Lincolnshire Theatre, Northwestern University, and countless other performing arts entities nationwide. His picturesque costume renderings have been exhibited and sold in art galleries, and have been featured in Time Out Chicago. In addition to working as a Freelance costume designer, Nathan is currently costume designer-in-residence at Thodos Dance Chicago. Nathan received his B.A. from the University of Wisconsin – Stevens Point.

Joe Court (Sound Designer) is a professional sound designer who has been based out of Chicago since 2006, and an Adjunct Professor of Sound Design at Ball State University. He is a company member with Mary-Arrchie Theatre Company. He has designed over 70 shows since moving to Chicago for many different theatre companies including Mary-Arrchie, A Red Orchid, The Inconvenience, Seanachai, TheatreSeven, Backstage, Boho, Emerald City, Lifeline, Pine Box, The Gift, The Clarence Brown Theatre (Knoxville, TN.) and The Illinois Shakespeare Festival. From 2008 until coming to Ball State Joe served as Sound Engineer for the Chicago production of the Tony Award winning musical Million Dollar Quartet. He received a Joseph Jefferson Award nomination in 2009 for his design for The Unseen with A Red Orchid Theatre. He holds a B.S. in Theatre Production and Design and an M.S. in Arts-Technology from Illinois State Universtiy.