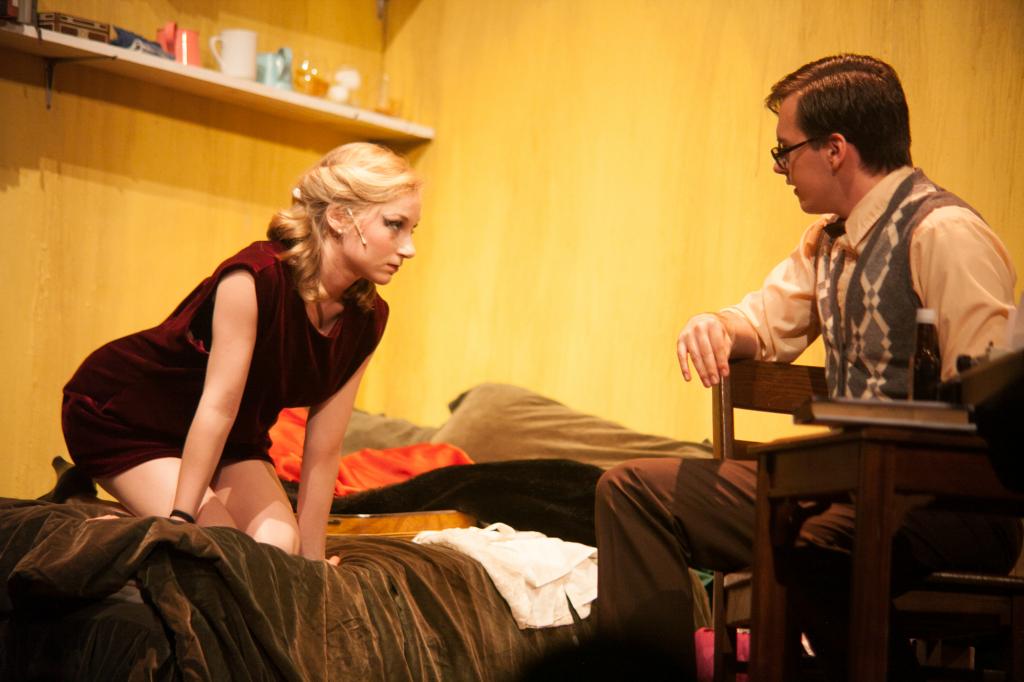 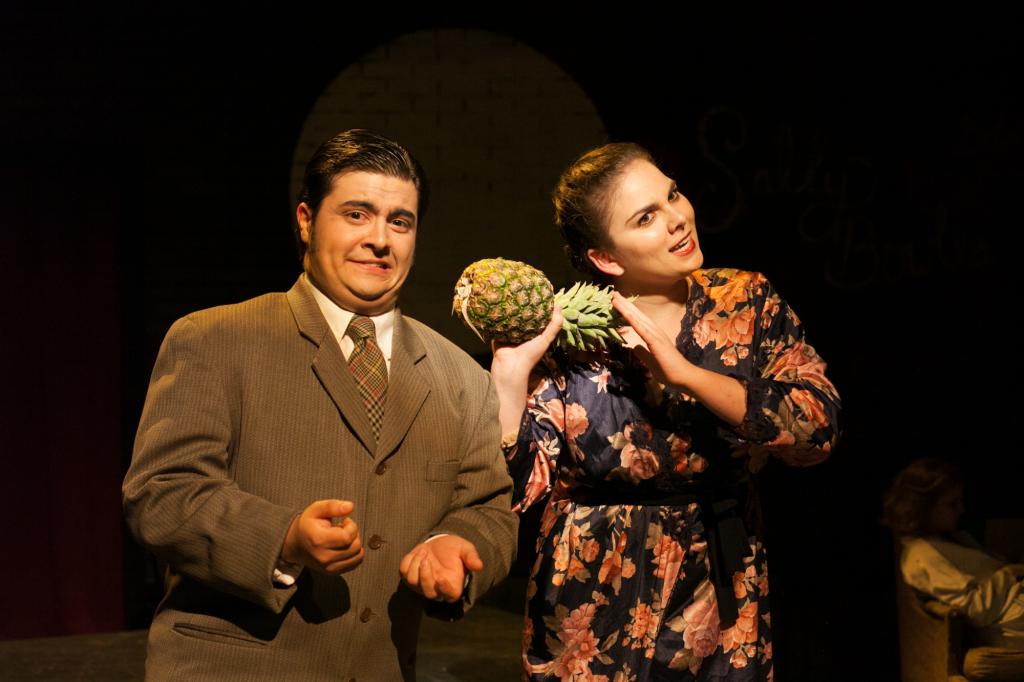 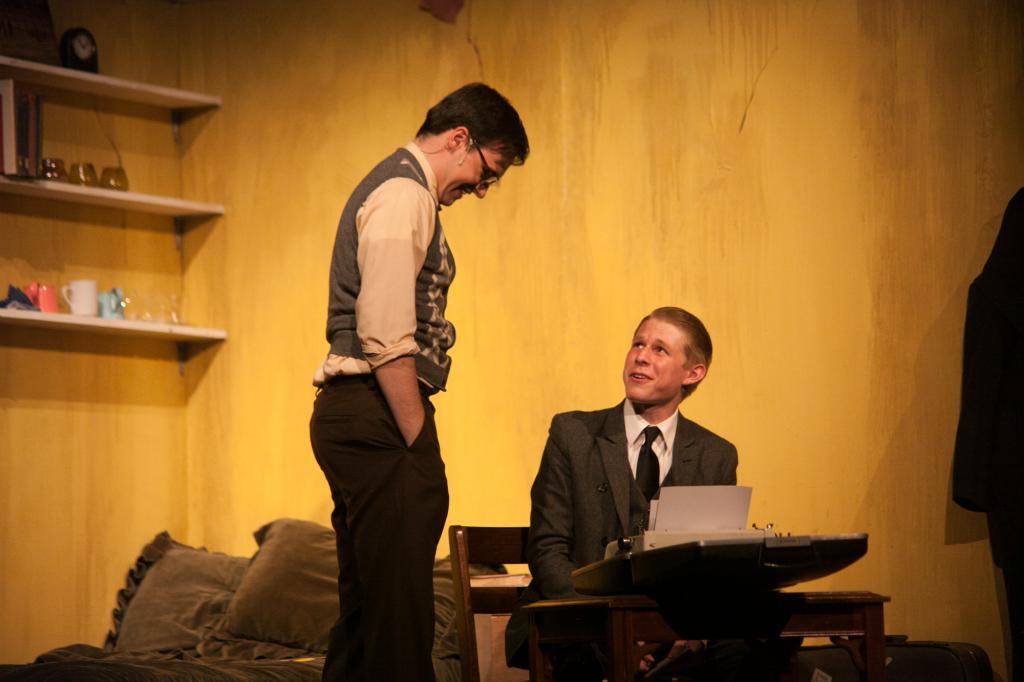 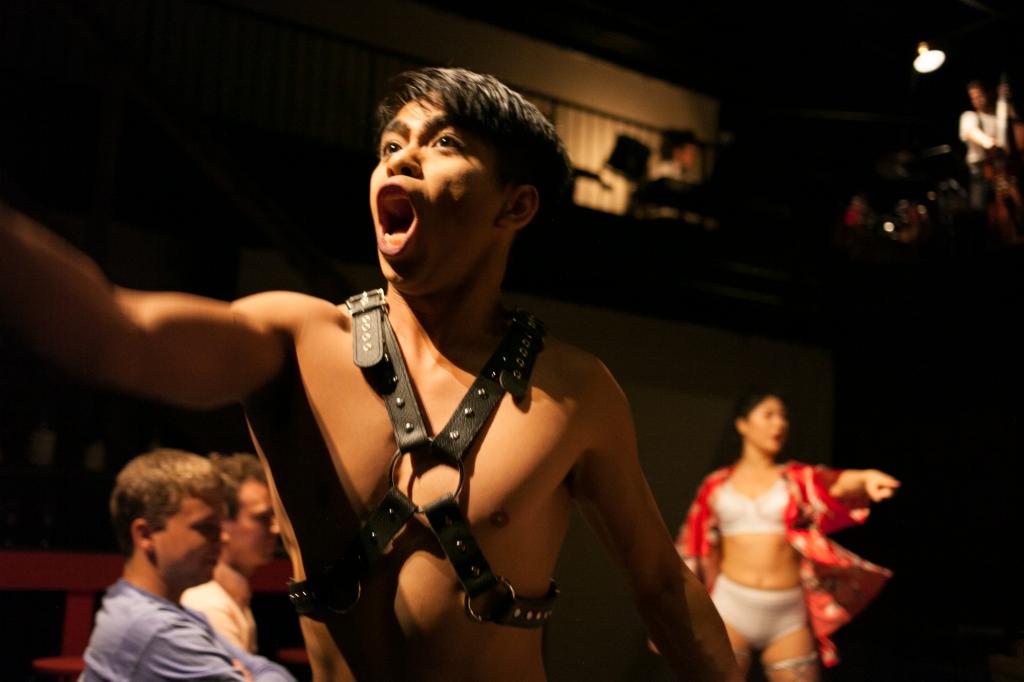 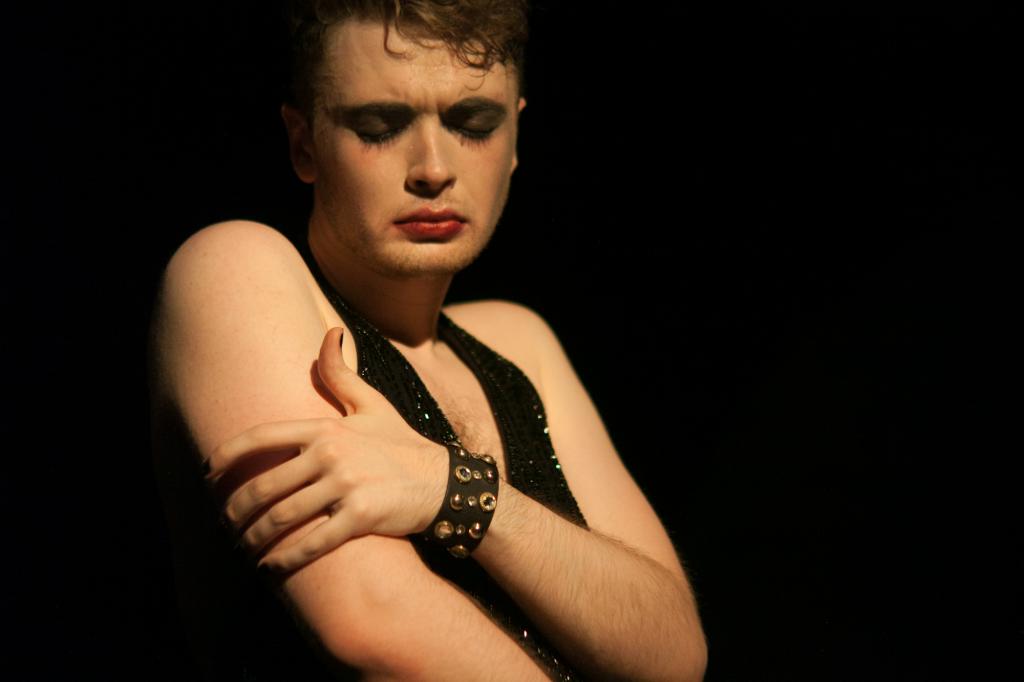 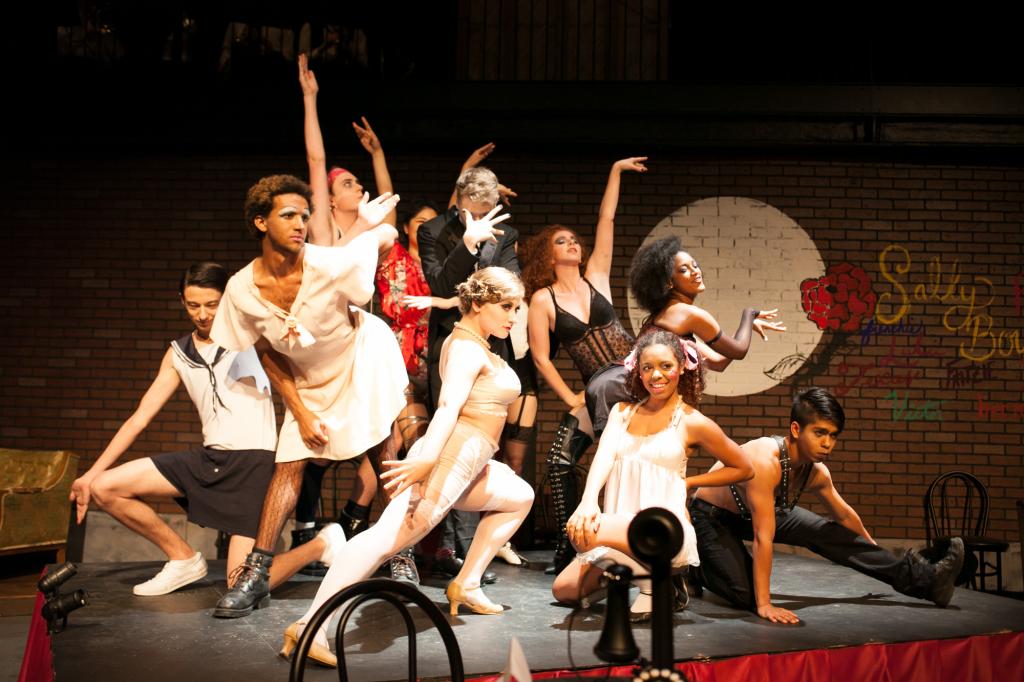 In this quarter's season closer, director Dani Wieder presents the 1987 revival of Cabaret (book by Joe Masteroff, music by John Kander, lyrics by Fred Ebb), a tangled web of romances set in Weimar Germany. This production returns to Christopher Isherwood's The Berlin Stories, a collection of gritty urban dramas and the original inspiration for the musical. Theater West becomes the Kit Kat Klub, a seedy basement stage full of music and lust. The lights are low, and the hopes are hot. And don't forget; war is on its way.

Éamon Boylan (Emcee) is a third-year majoring in English Literature and TAPS. With University Theater, he has directed The Glass Menagerie, This Property is Condemned, A Monologue from The Taming of the Shrew, assistant directed The House of Yes, and looks forward to directing Macbeth in the Fall. Also with University Theater, he has acted in Reefer Madness (Lecturer), Henry VI (Warwick), What I Meant Was (Fritzie) and worked as a dramaturg on The Merchant of Venice. He also has written and directed for New Work Week and co-curates the quarterly Theater[24] festival, in which he has performed many times. At Logan he works in the Box Office and with TAPS he serves as Front of House Manager North.

Thomas McLees (Cliff Bradshaw) is a 1st year TAPS Major in the College, and is thrilled to be working with everyone in "Cabaret" on his first UT show.

Cameron Vanderwerf (Ernst Ludwig) is a second-year English and TAPS major in the College. Past UT roles include Lysander in A Midsummer Night's Dream, Launcelot in The Merchant of Venice, and Billy in The Real Thing.

Elisabeth Del Toro (Frӓulein Kost) is a 2nd year TAPS/Spanish major. Elisabeth is excited to return to UT playing Fraulein Kost. She has acted in last year's New Work Week, several Theater [24] shows and 6 UT productions, including Cabaret. Once in a while, she emcees the similarly titled Logan Center Cabaret. Elisabeth wrote and directed a play for this year's New Work Week, and also serves on UT Committee as Secretary and is a curator for the Theater[24] Festival.

Alexandra Merritt Mathews (Fräulein Schneider) is an actor, director, and writer based in Chicago, IL and Buffalo, NY. Most recently, Alexandra performed in PLATH/HUGHES as Sylvia Plath at the Curious Theatre Branch's Rhinofest in February and at the FOTA Spring Festival in May. Other previous roles include: The Drowsy Chaperone (The Drowsy Chaperone), ALICES: Adventures in Wonderland (Secunda), ‘Tis Pity She’s A Whore (Richardetto), An Actor Prepares (Stanislavski #4), Coriolanus (Menenius Agrippa/Fight Captain), A Chorus Line (Sheila Bryant), and Rosencrantz and Guildenstern Are Dead (Gertrude). Film credits include: “The American Side” and “Battledogs.” Alexandra serves as the director of Curtain Up!, a summer musical theatre program for teens in Buffalo. She also dabbles in dramaturgy, and she was an Assistant Dramaturg on Court Theatre’s productions of The Misanthrope and Tartuffe last spring. She is the Musical Director of Soul Umoja (UChicago’s Gospel Choir) and she is a member of the Chicago-based dance ensemble, Balkanske Igre. She thanks her family and friends for their unwavering support. Visit http://alexandramerrittmathews.appspot.com/ for more information!

Adam Amil Sharif (Hermann/Max) is a second-year in the college, currently tied to a Philosophy major. He is excited to perform for you this evening. He has a burning desire to dance more on stage, for it whipped him into shape for this production. He hopes you feel bound to your seats watching the show.

Laurie Beckoff (Helga) is a second-year English major.  Her dance training is primarily in tap, jazz, ballet, and musical theatre, with a focus on Fosse.  She has performed in a number of musicals, such as 42nd Street (Diane Lorimer), Thoroughly Modern Millie (Miss Flannery), and Once Upon a Mattress (Queen Aggravain).  Her previous UT credits include The Doctor and Ariel in the Tempest (Ariel), The Twelve Dancing Princesses (Princess #8), The Drowsy Chaperone (choreographer), and As You Like It (Phebe).

Crystal Ma has been dancing for 10 years and enjoys performing in various events on campus. She was a tap dancer in 42nd Street and a keyboardist in the pit orchestra in The King and I. Her favorite color is grey and she likes making guacamole.

Alex Jarman (Victor) is a first-year in the college considering a major in Political Science and a minor in History.  He is excited to be working on his first UT production.

Leilani Douglas (Texas) is a first year in the College. She is so excited to be returning to her first love, musical theater, through her first production with University Theater! On campus, Leilani also dances with the Indian fusion dance group Maya, volunteers with Peer Health Exchange, and works in the Office of Admissions.

Alana Thompson is a first year in the college, hoping to major in English or History. This is her first role with UT.

Dani Wieder (Director) is a second year in the college. After creating directing a workshop (Barely There), Dani is making her main stage directorial debut with Cabaret. Dani has also been an actor, choreographer, dramaturge, and UT Committee member. This is her 6th UT credit.

Murphy Spence (Lighting Designer) is TAPS major in the college; she is employed by the theater department as a member of the technical staff and as the assistant to the director of the department. While this is her first production as head set designer, she has previously worked as a master carpenter (Fool for Love), lighting designer (As You Like It; The Drowsy Chaperone), as well as an assistant lighting designer (The Real Thing; reWilding Genius). Outside of UT, she has worked with the Laura Twirls Suicide Foundation, Chicago Association of Black Storytellers, The New Colony, and the Inconvenience. Lauren Eames (Master Electrician) is a first year Religious Studies Major.  For UT: Buried in Bughouse Square: A Studs Terkel Circus (ME); Godspell (ME); Fool For Love (ME); The Hamletmachine (ALD).  She has also designed lights for UChicago MAYA and Le Vorris & Vox, and is a curator for Theater[24].  She occasionally appears on stage as well.

Victoria Grose (Costume Designer) is a second-year Biological Sciences major in the College. She has been involved in UT since fall quarter her first year, previously costume designing Fool for Love, High Art: Commedia presents Hamlet and the The Drowsy Chaperone, and costume assisting on B-Side Studio, Hotel Nepenthe and The Glass Menagerie.

Ramon Valladarez (Lighting Designer) is a first-year in the college.  He has previously worked on UT's productions of As You Like It (assistant LD), Grey Gardens (spot op), and Godspell (assistant ld), as well as on CES's Thrill Me (LD).

Alexandra Garfinkle (Props Master) is a third-year TAPS major. She has worked in UT as a production manager, designer, dramaturg, and director; she also serves on UT committee.

Claire Haupt (Production Manager) is a first year political science major. She has previously assistant production managed on Hedda Gabler and Godspell. She is very excited to be production managing for the first time!

Benjamin Heller is a fourth-year political science major. Previously he has production managed Twelfth Night (Winter '12), The River Jordan (Spring '12), The Credeaux Canvas (Winter '13), Hello Out There and First Love (Spring '13), Hedda Gabler (Fall '13), and Godspell (Winter '14). This quarter, in addition to dramaturging Cabaret, he was the production manager for Much Ado About Nothing. Thanks to University Theater for everything.

Sarah Lo (Co-Choreographer) is excited to be choreographing her first musical, and thrilled that it is for a play as compelling and intriguing as Cabaret. She co-directs the dance group UChicago Maya and has been or is a member of a number of other dance groups on campus, including PhiNix, RBIM, and Raas. She's especially interested in using dance as narrative and in mixing different styles, both from the Western canon and from Eastern traditions.

Angela Shen (Co-Choreographer) is a second-year studying Biological Sciences with a Neuroscience concentration. This is her first UT show. She has loved working on this show and is looking forward to more! Outside of UT, she also leads UChicago Maya and FOTA.

Eleanor Clifford (University Theater Committee Liaison) is a second-year HIPS and TAPS major. She has been performing most recently with Le Vorris and Vox Circus and this quarter also acted, directed, and liaised for UT's New Work Week.

Noah Baskes (Master Electrician) is a first year physics major and a lighting technician. He has been involved with lighting since the start of high school and wants nothing more. Past lighting credits include 38 Special, the Human Rights Coalition and CATCO, and Lighting Director on Mrs. Ohio America 2013. Acting credits include ME on Waiting for Godot (Shepard Productions).

Collin D'Aloiso (Bass) has been playing stringed instruments primarily trained in jazz since the age of 11. Formerly, he was a member of the Tucson Arizona Boys Chorus, Tucson Jazz Institute, and the UChicago Motet Choir. Collin has studied under distinguished musicians such as Carlos Henriquez, Brice Winston, and Dave Douglas. He is a second year math major at the College and plans to work in environmental conservation or organic farming in the future.

Harriett Davis (Percussion) is a 4th-year History major graduating in June. This is her first UT production, and working on Cabaret has been a rewarding experience for her last quarter. She is thrilled to have the opportunity to work with a great orchestra, staff, and cast, and hopes you enjoy the show!

Natalie Wagner is a first year who is planning to major in Law, Letters, and Society and TAPS. She was the Assistant Stage Manager for Hedda Gabler, Grey Gardens, Godspell, and Buried in Bughouse Square. In addition, she has designed and curated-for-a-day for Theater[24], and she is a member of University Theater's Student Committee.

The musical Cabaret is my first performance in a band and with UT. I've played the guitar for six years now, self-taught. I am a first year, I sing in an a Capella group, Make a Joyful Noise, and I am (currently) intending to major in Music and Comparative Human Development.

Adam Johnson (Synth) is a first year Econ/PoliSci major. He has previously appeared in Grey Gardens and A Little Star Quality and will be directing a workshop next autumn.

Connor Hanna (Tenor Saxophonist) is a third-year French major and music minor in the College.  Although this is his first participation in any UT show, he has been involved with several on-campus music groups, such as the University Wind Ensemble, the Jazz X-Tet, and the Dirt Red Brass Band, which he currently manages.

Curtis Walls (Trumpet) is a first year from Missouri. He's possibly majoring in biology with a minor in minor. Some of his passions include biking, lemons, Avicii, capybaras, and knowledge.

David Casey (Alto Sax, Clarinett, Flute) is a first-year at the university studying mathematics.  He hopes to graduate.  Outside of musical theatre, some of his interests include (in no particular order): Ice cream, Long walks, Lists, Ukelele, Madonna, Iambic hexameter, Nothing, Acronyms, Tuesdays, Interrogatives