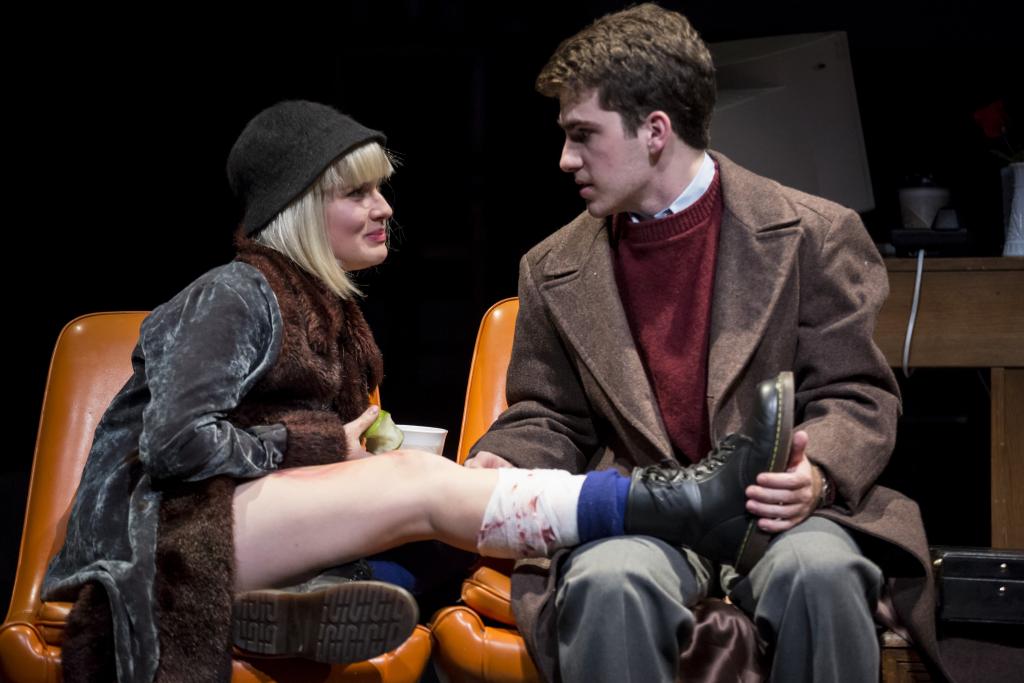 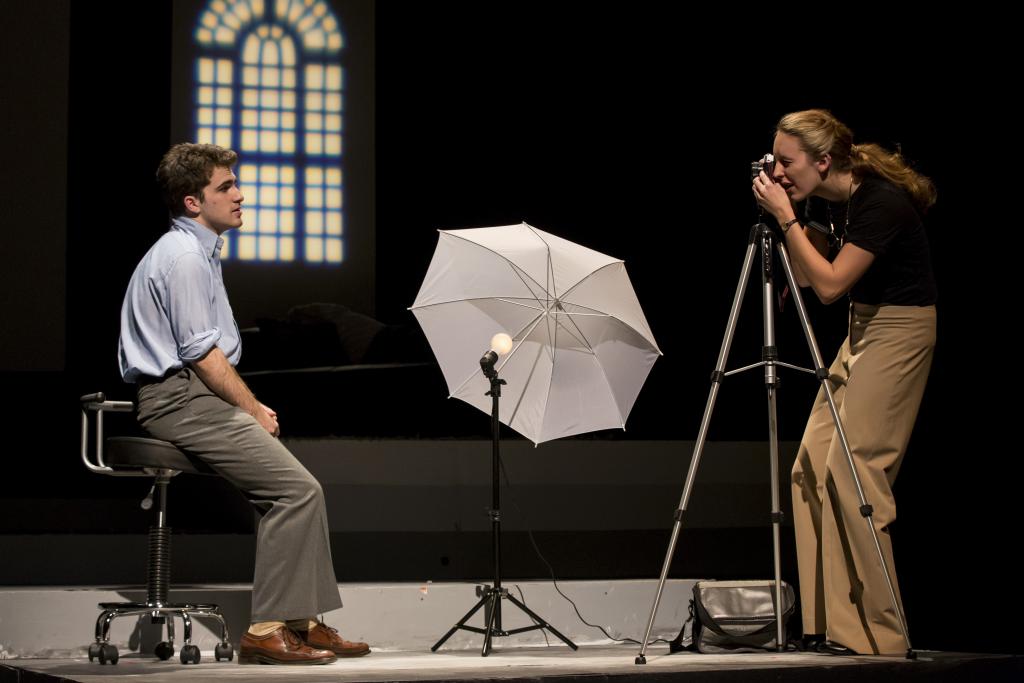 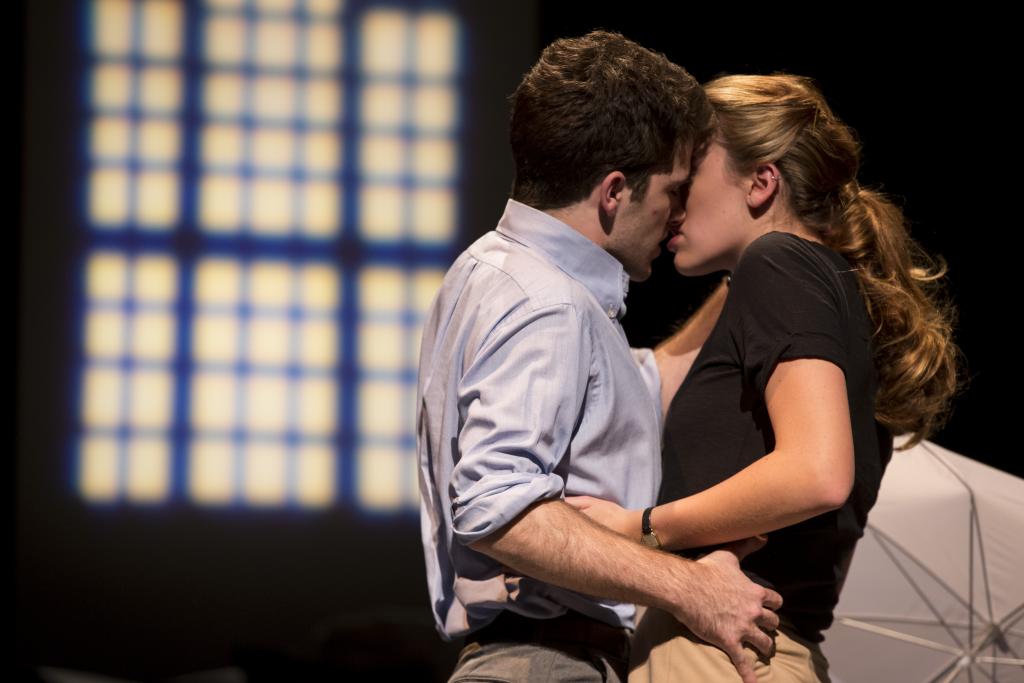 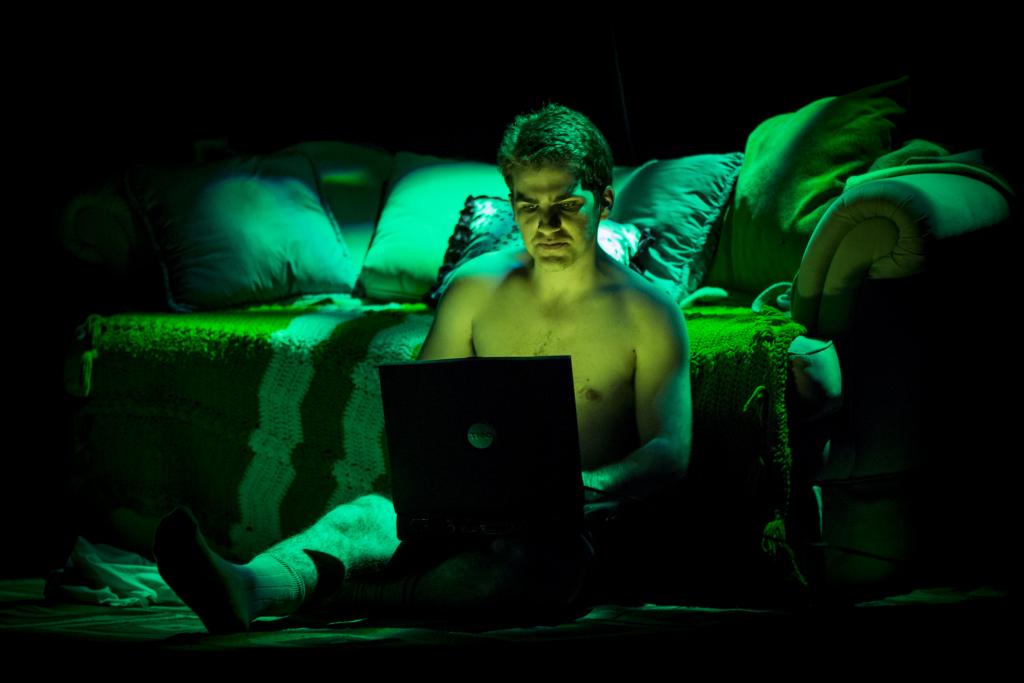 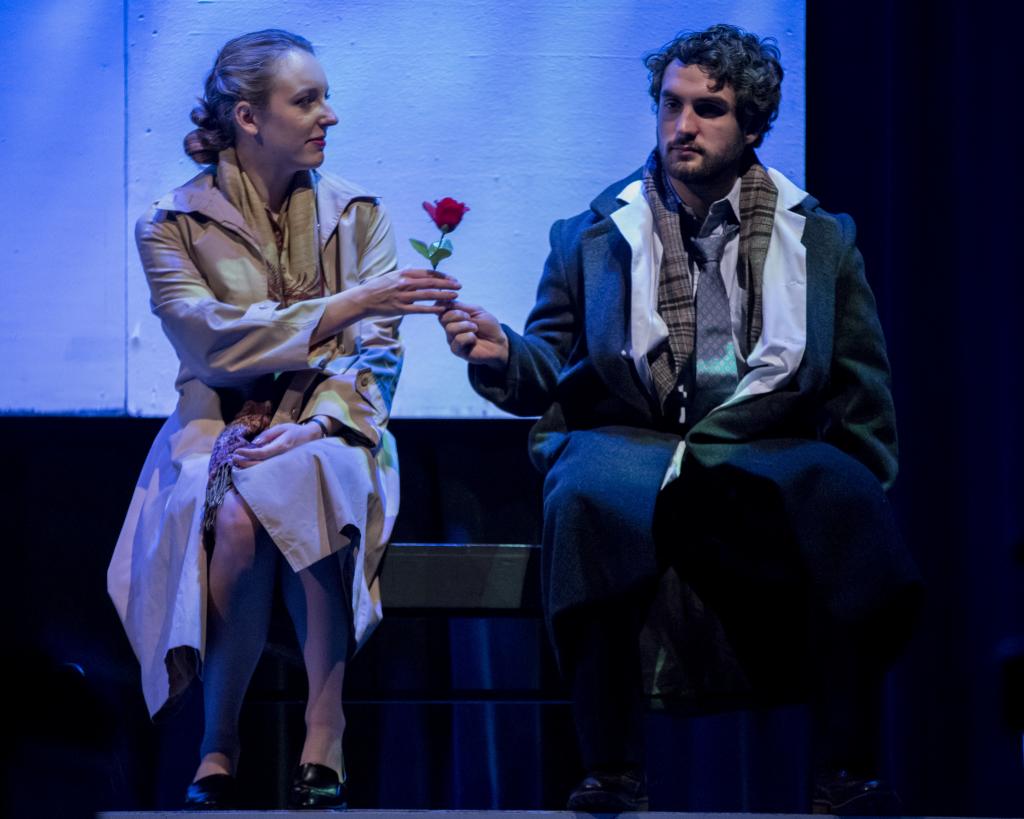 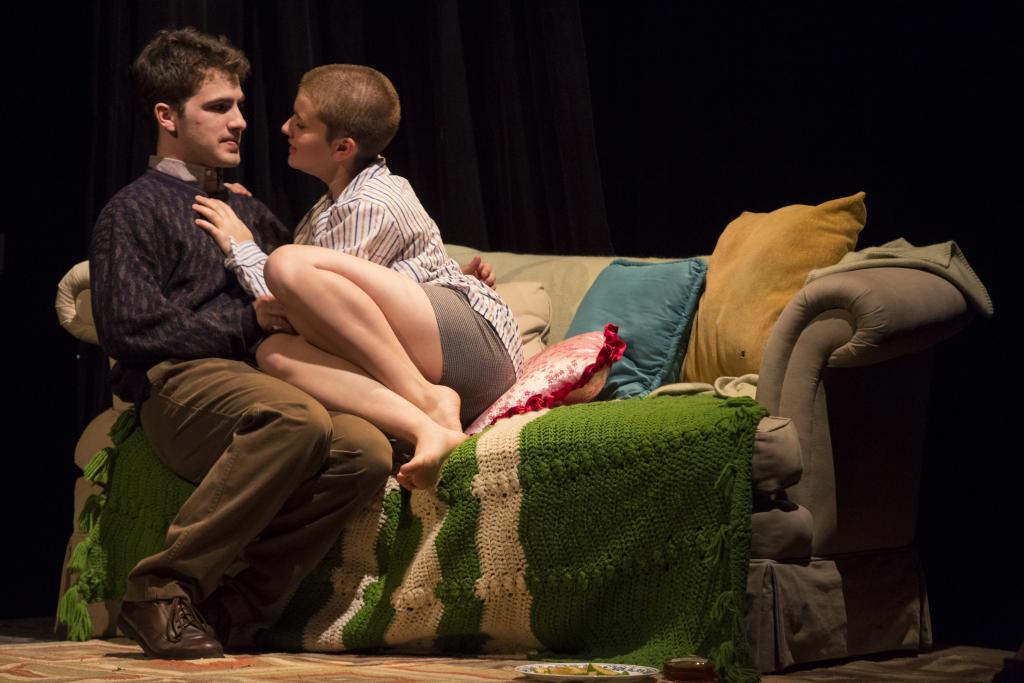 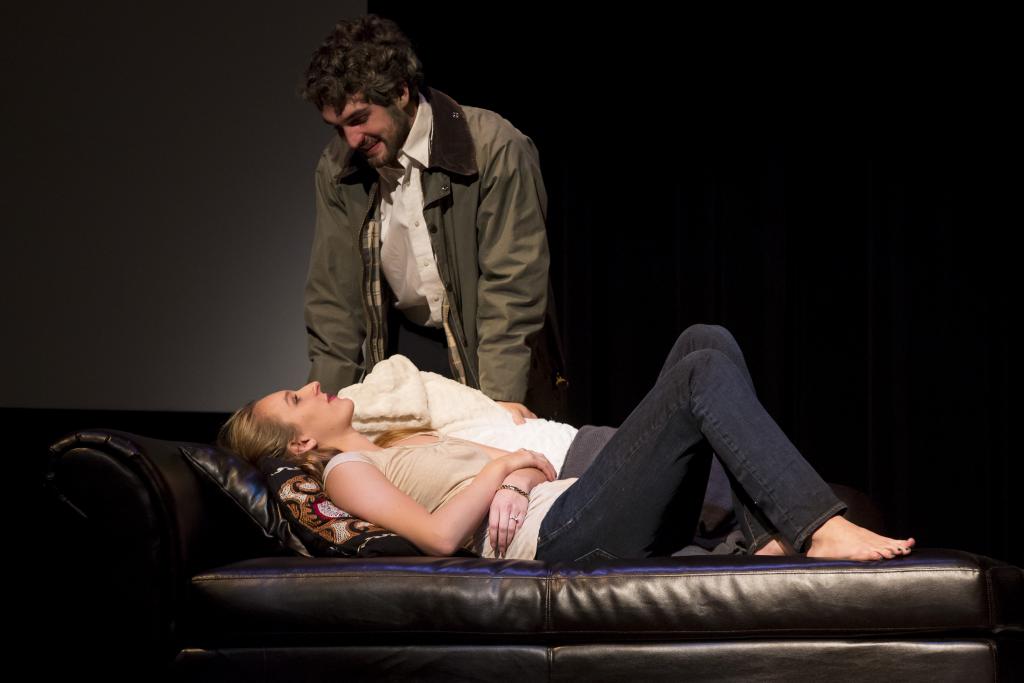 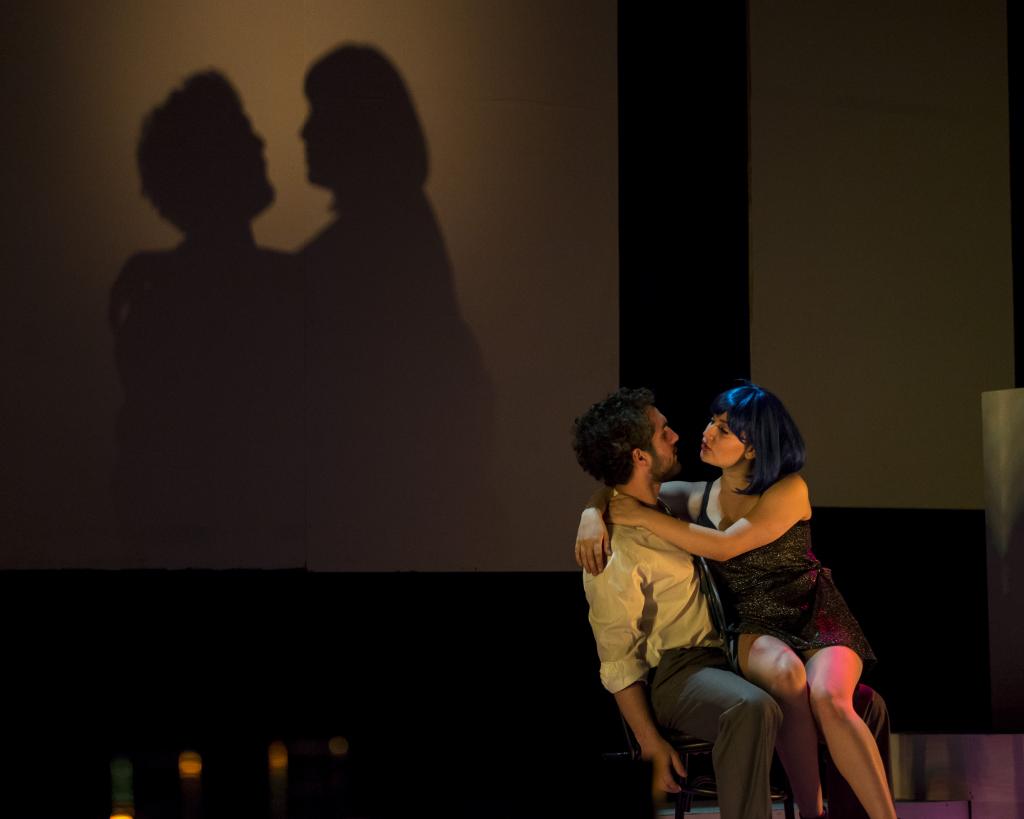 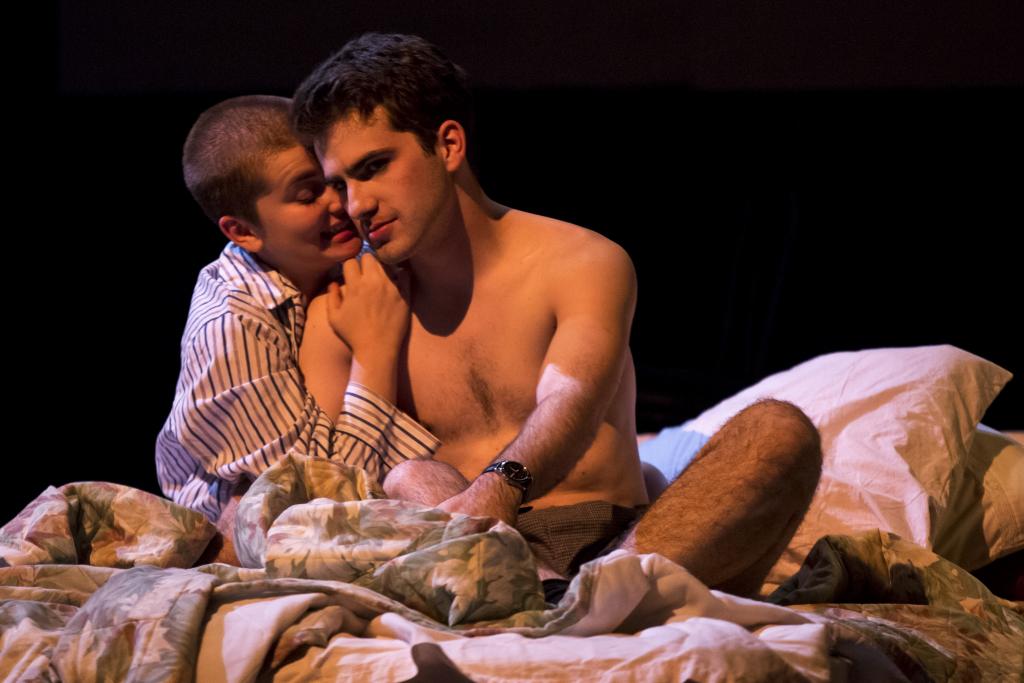 In Closer, London of the 1990s is plastic and blank, waiting for an upload of true human intimacy.  But as four Londoners seek and evade each other, flirting and flying through chatrooms and strip clubs, honesty becomes a performance.  In a dense and tangled network, Alice, Anna, Dan, and Larry capture and negotiate their many loves by any and all emotional means.  And the London streets look more and more like a Möbius strip.  Will this loop return them to the truth?

Elisabeth Del Toro (Alice) is a third-year TAPS and Anthropology major. She has acted (Cabaret, Godspell, Grey Gardens, House of Yes, Drowsy Chaperone, ALICES), stagehand-ed (Henry VI), and assistant sound designed (Glass Menagerie) for UT, and is currently serving her second term on UT Committee, as Secretary. She is also a curator of Theater[24] and wrote a play, Closure Pending, which debuted in the 2014 New Work Week Festival. This summer, Elisabeth performed in a devised piece titled Before the Window, and her voice was featured in the residency performance of The Temp.

Christopher Deakin (Dan) is a fourth-year majoring in TAPS. He has performed in UT/TAPS productions since his first quarter in the College. He appeared in The Violet Hour, Twelfth Night, The Lion in Winter, The Glass Menagerie, The Merchant of Venice, The House of Yes, Hedda Gabler, Buried in Bughouse Square, and most recently, A Streetcar Named Desire. He also wrote and directed a workshop production of Springwood Central Honors Society. You can see him next in April, in First Floor Theater's world premiere of The Paranoid Style in American Politics.

Alex Morales (Larry) is a second-year, double-majoring in Psychology and TAPS, with a specialization in audience psychology. He has taken the UT stage in Springwood Central Honors Society and A Streetcar Named Desire.

Natalie Pasquinelli (Anna) is a first-year. This is her first show with UT. Her previous acting credits include Our Town, Pride and Prejudice, A Midsummer Night’s Dream, and Radium Girls.

Scarlett J. Kim (Director) is a fourth-year TAPS and DOVA major who wants to become a real life theatre director when she grows up. With UT, Scarlett has directed Hamletmachine, Hotel Nepenthe and 4.48 Psychosis; acted in reWILDing Genius, House of Yes and Vagina Monologues; scenic designed Godspell; and assistant directed Buried in Bughouse Square. She chairs the UT Committee.

Claire Haupt (Production Manager) is a second-year Political Science major. She has previously been a part of the Production Management team on Hedda Gabler, Godspell, and Cabaret. Claire is a member TAPS Tech Staff and has served on UT Committee.

Xan Belzley (Stage Manager) is a fourth-year English major. Her previous show credits as a stage manager include This is Our Youth with UT and Orestes at Delphi and Twain's World with First Floor Theater. She also assistant stage managed reWilding Genius with TAPS and The New Colony. Her acting credits include Twelfth Night and Cymbeline with the Dean's Men and The Clean House, Alices: Adventures in Wonderland, and Boston Marriage with UT.

Lee Ehudin (Set Designer) has previously been a stagehand for Grey Gardens and Buried in Bughouse Square, and assistant set designer for Godspell.

Ivan Pyzow (Composer, Sound Designer) is a fourth-year majoring in Slavic Languages and Literature. He has composed and performed music for Beowulf (CES), The River Jordan (Le Vorris & Vox), and Hamletmachine (UT).  He appeared in The Physicists (UT) and currently serves as director of the Dirt Red Brass Band and lead songwriter of a Fleetwood Mac tribute band.

Daniel Heins (Master Electrician) is a first-year potential Geophysical Sciences major. In high school he worked in various capacities for numerous shows among a handful of school and youth theater groups. This quarter he will also be working on Henry V and Macbeth.

Maria Decker (Lighting Designer) is a fourth-year Mathematics major and Polish Studies minor.  Her previous UT credits include Props Master for A Midsummer Night’s Dream, Director for the Winter 2014 Workshop: Sure Thing, Stage Manager for As You Like It, and Assistant Lighting Designer for The Drowsy Chaperone, among many others.  She has also light designed for the D.C. Fringe Festival.

Eric Kirkes (Props Designer) is a second-year considering a major in the humanities or social sciences. Previous UT shows include Godspell and A Weekend of Workshops. Other production credits include Aida, Les Miserables, and A Midsummer Night's Dream.

Isabelle Langrock (Costume Designer) is a fourth-year HIPS major. She has worked on costumes for several shows for UT, most notably Godspell and Much Ado About Nothing, as well as acted in several workshop seasons.

Kevin Freese (Master Carpenter) is a third-year Math and Computer Science major. Kevin has previously designed lights on Much Ado About Nothing and A Midsummer Night's Dream, and been an electrician on many other productions at UT. Kevin is also a member of Tech Staff.

Alexandra Garfinkle (Dramaturg) is a fourth-year TAPS major. She has trained at Black Box Acting Studio, serves on Committee and has garnered more than a dozen credits as a designer, dramaturg, and director. Currently, she is the assistant director for A Christmas Carol at the Goodman Theatre and is directing UT's winter production of Amadeus.

Sarah Charipar (Dialect Coach) received her MFA from The Theater School at DePaul University.  Professionally she has worked in Chicago in theater, television, film and as a voice over artist.  She appeared in productions at Steppenwolf, The Goodman Theater, and Famous Door Theate. In addition to teaching and coaching, Sarah works as a freelance casting associate at PR Casting.

Noah Kahrs (Composer) is a second-year majoring in Music and Mathematics.  He has previously worked on Godspell, Hamletmachine, and Hedda Gabler.

Andrew Molina (Cellist) in the University Symphony Orchestra and chamber music program on campus.  He is an alumnus of the Chicago Youth Symphony Orchestras.  Andrew enjoys participating in the music ministry at Calvert House, and serves as principal cellist in the Wheaton Symphony/Wheaton Pops Orchestra. A first-year student, Andrew is a pre-med and plans to major in chemistry.

Victoria Mooers (Violinist)  is a third-year Economics and Public Policy major.  Since first-year, she has been a member of a string quartet and the University Symphony Orchestra.

Felicia Woron (Violinist) is a second-year considering an International Studies major. She has been playing violin since she was six years old and now plays in the University Symphony Orchestra.

Caitlin Hubbard (Assistant Production Manager) is a first-year majoring in Classics or Political Science. This is her first production with the UT.

Vivian Zhang (Assistant Set Designer) is a first-year prospective economics major. This is her first time working with UT.

Joey Wong (Assistant Set Designer) is a first-year intending to major in Comparative Human Development. This is her first UT show.

Sarah Stark (Assistant Props Designer) is a first-year majoring in Comparative Human Development. Past experience includes acting in high school productions of Weird Romance and Will Rogers’ Follies, and working as props master for six high school plays and musicals.

Charlie Lovejoy (Assistant Props Designer) is a first-year English major. In high school they stage managed and acted in a many productions. Charlie has also designed for Theatre[24] and performed at St. Paul’s professional youth circus, Circus Juventas.