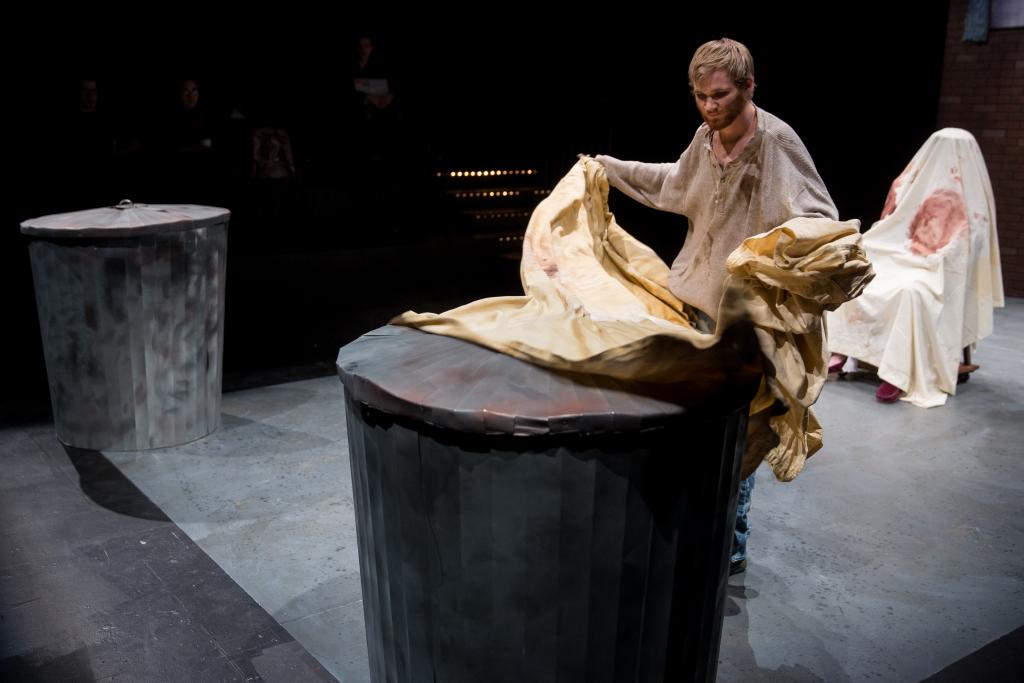 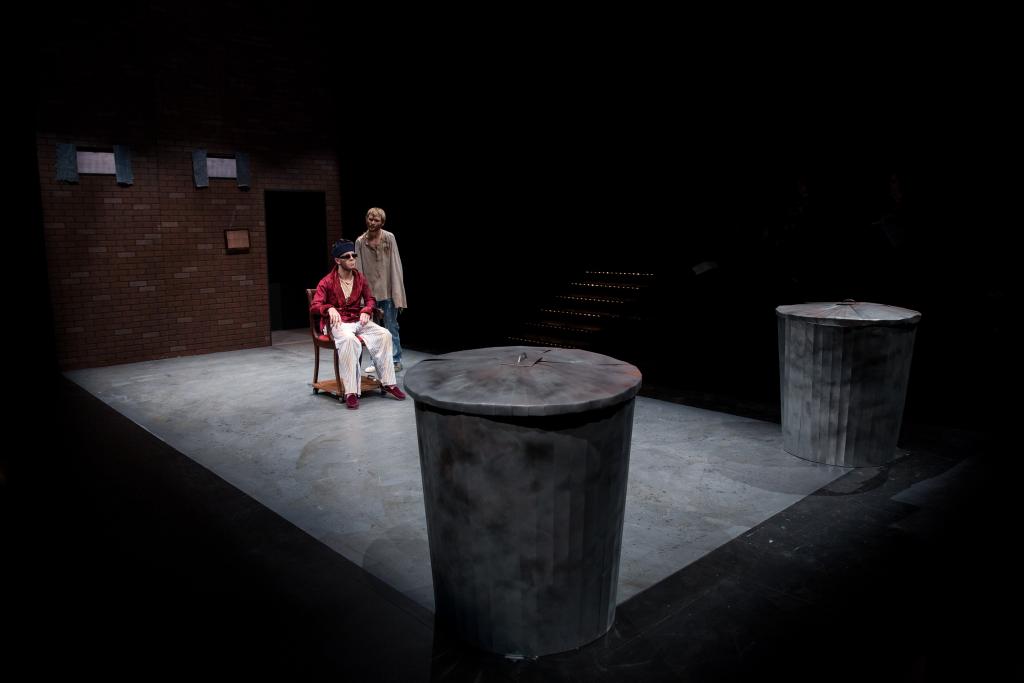 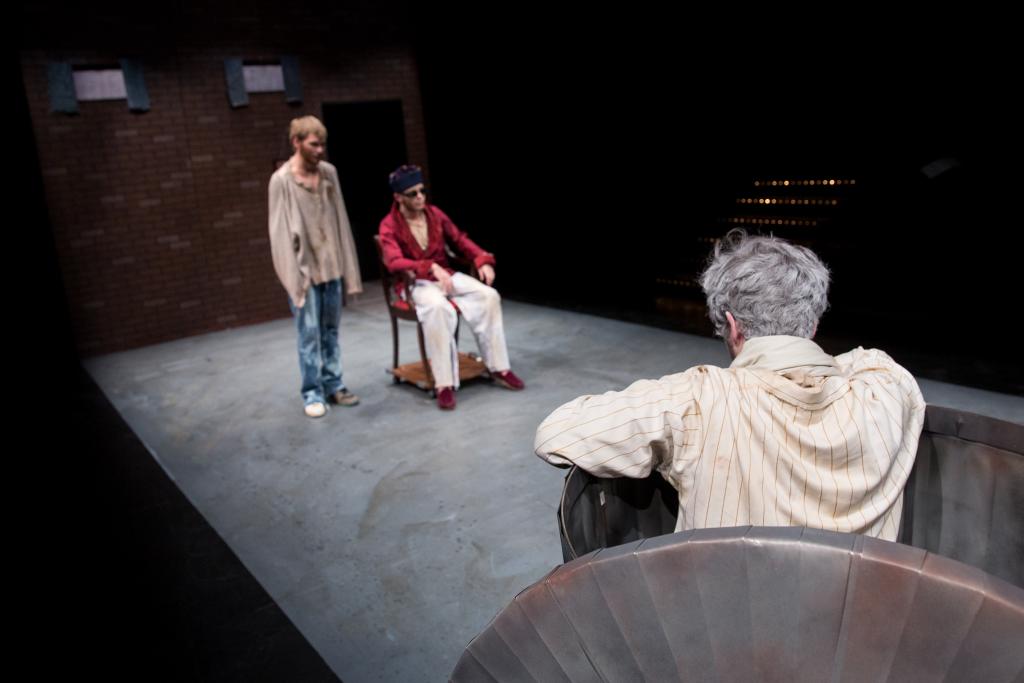 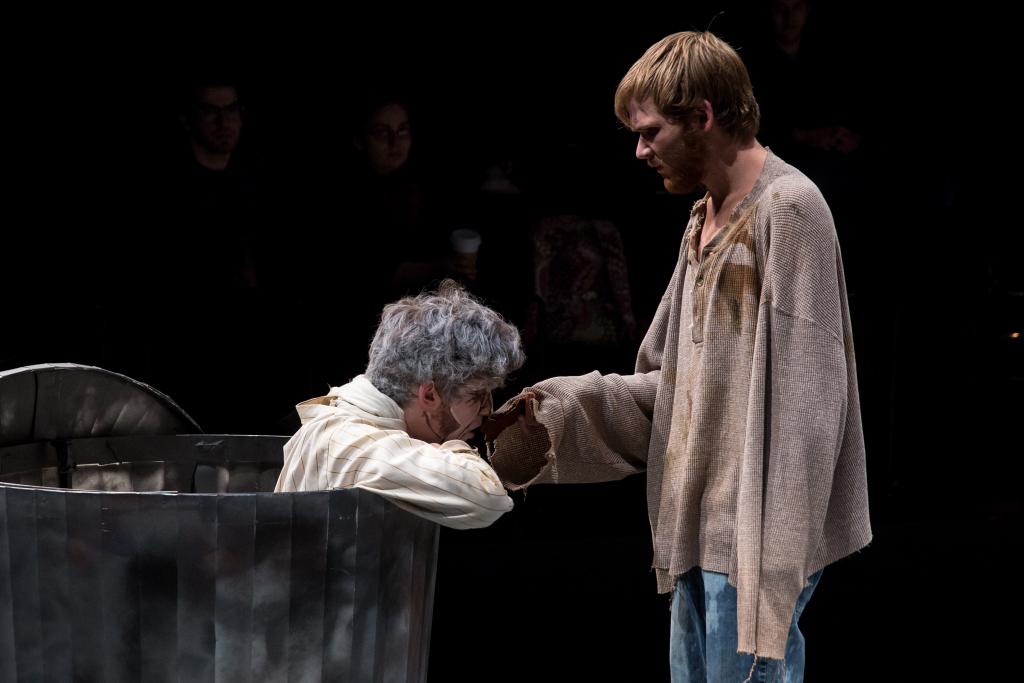 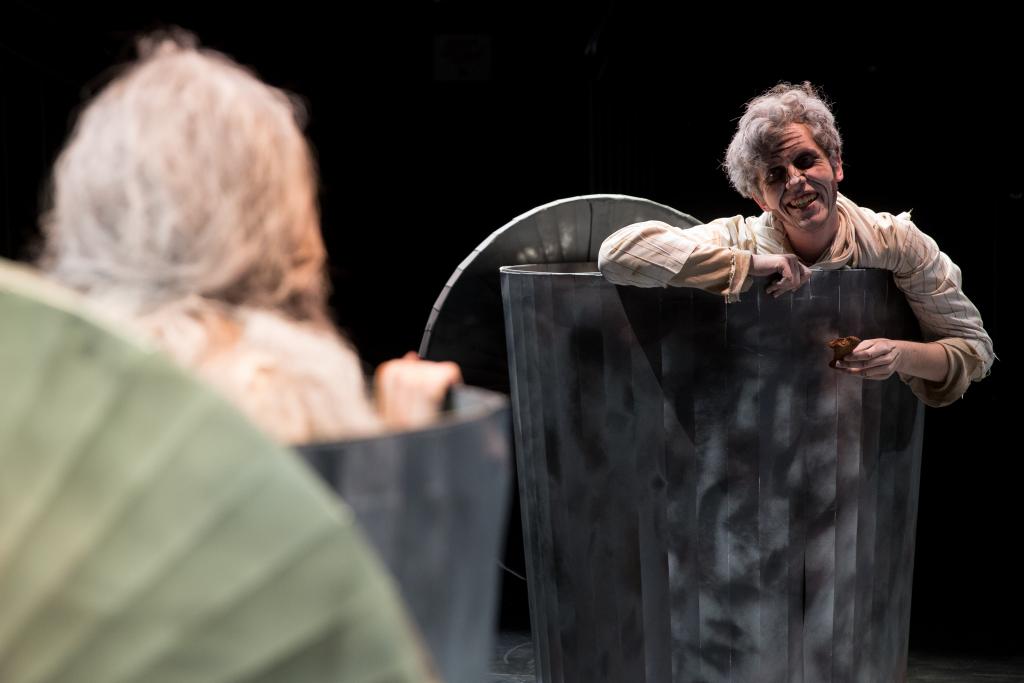 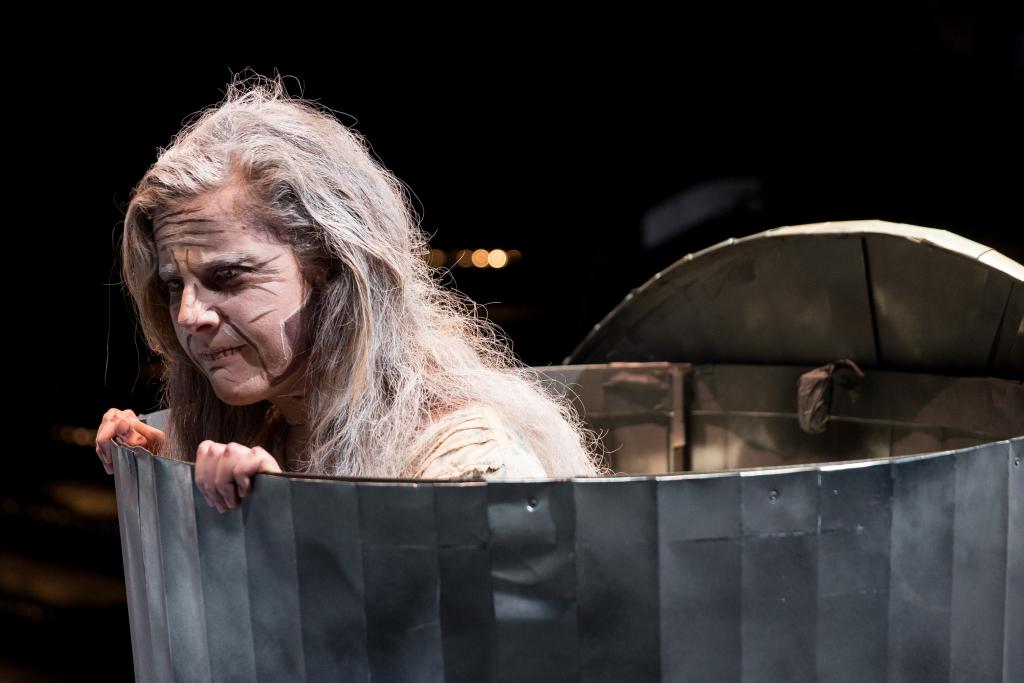 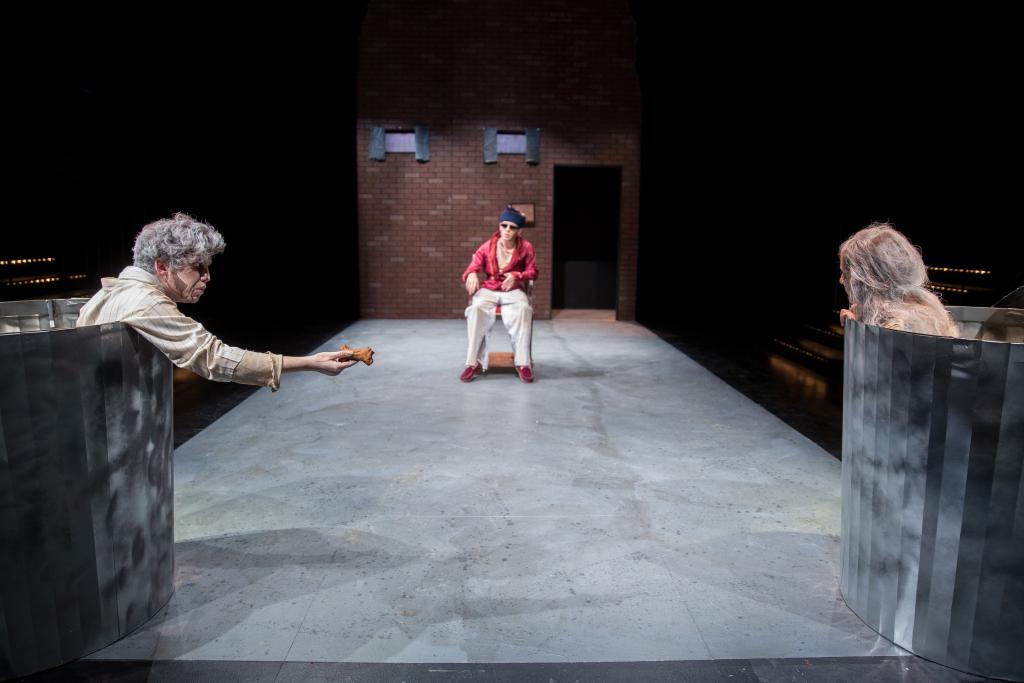 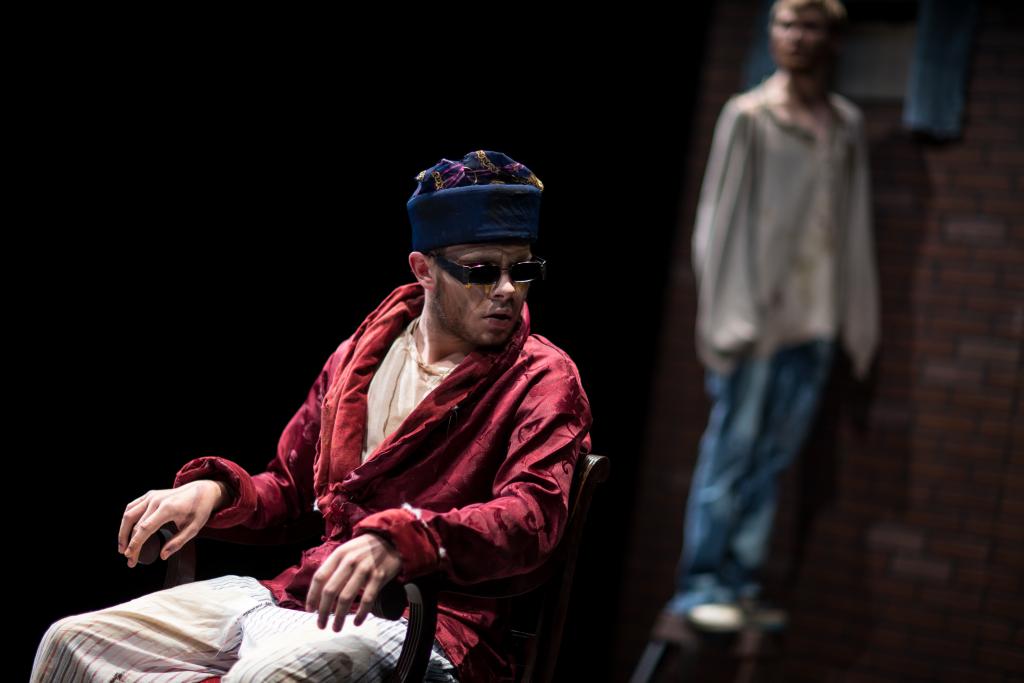 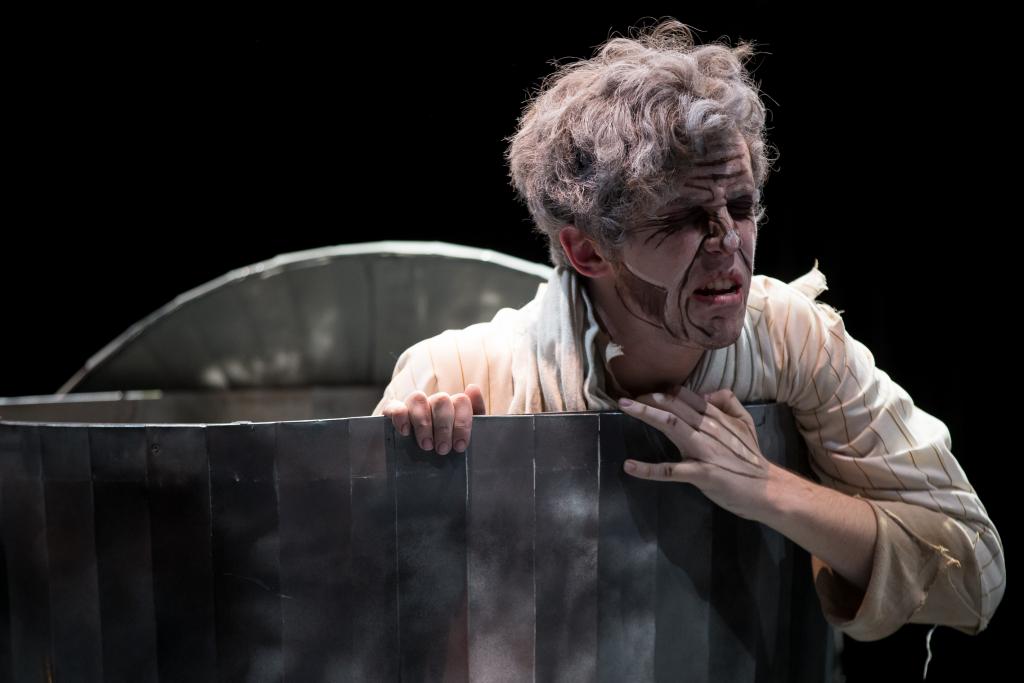 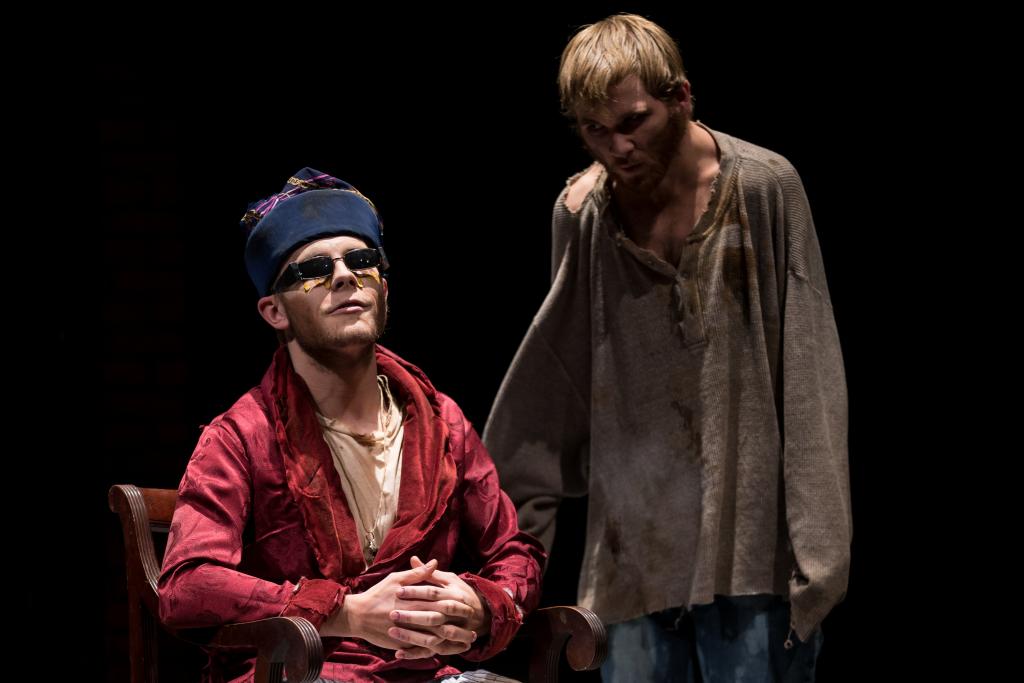 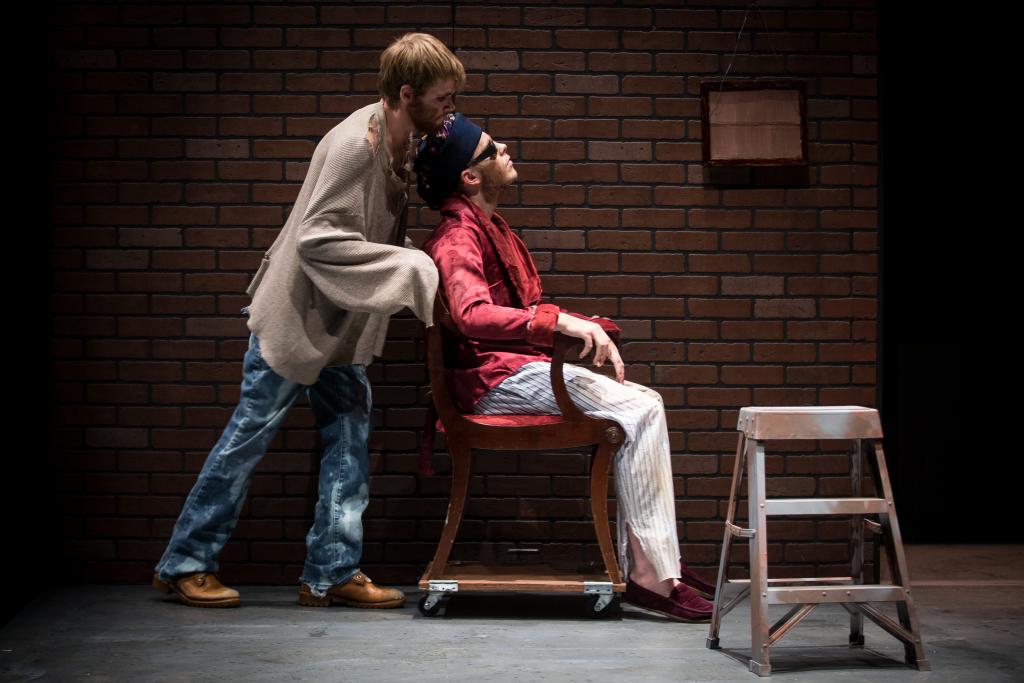 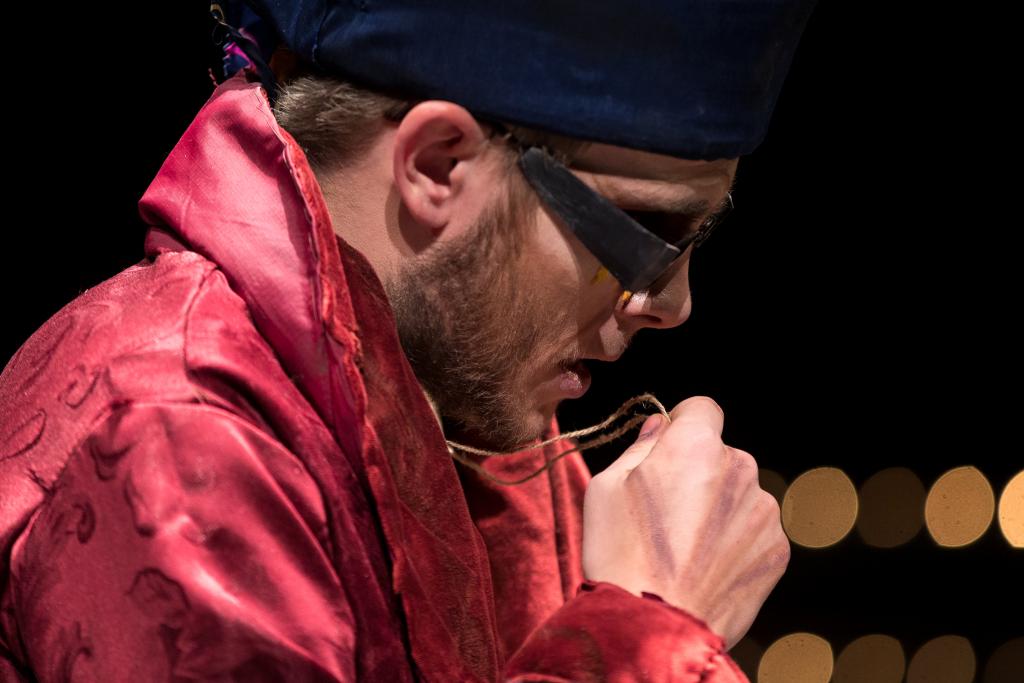 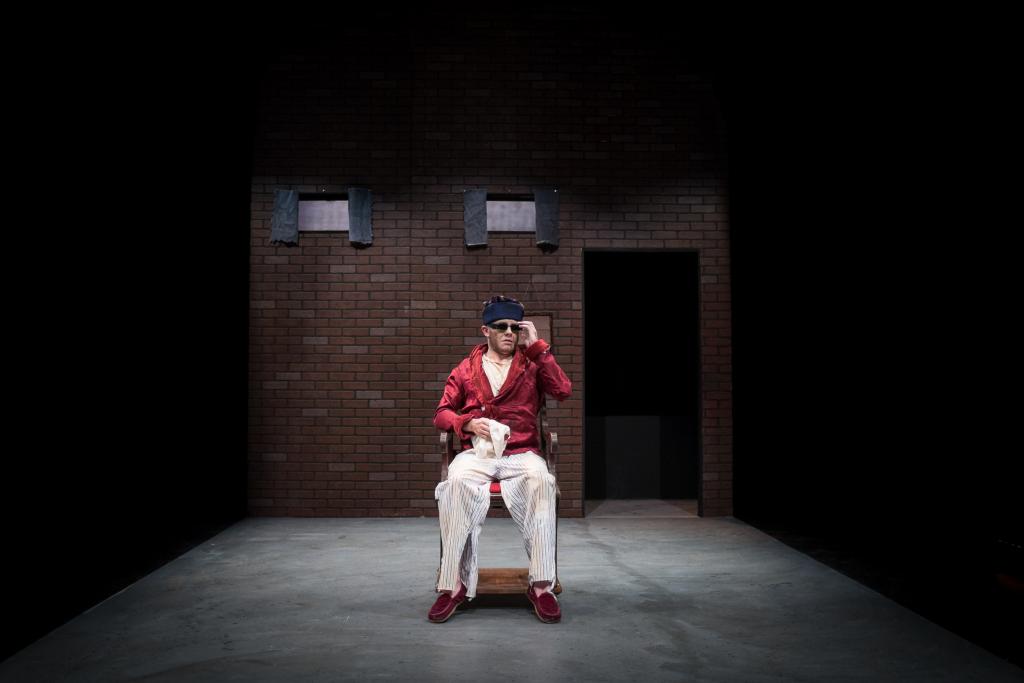 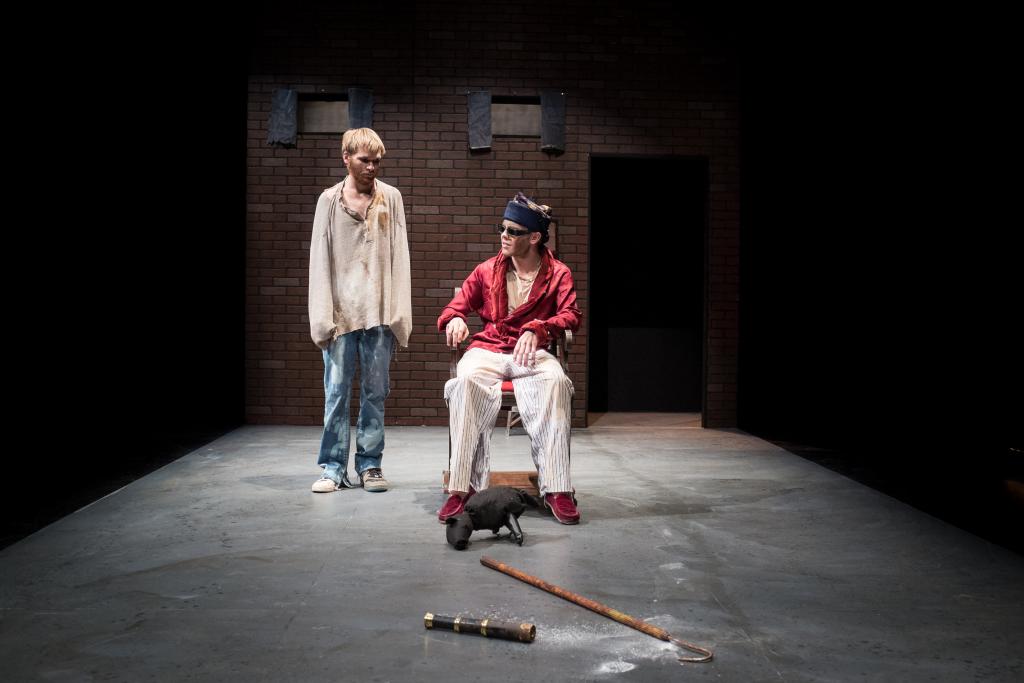 Cruelty is mundane and everyone is claustrophobic in Samuel Beckett's Endgame, directed by Julia Santha.  A bare interior confines four humans, protecting them from a quiet apocalypse outside.  Language lacerates and longs in quick succession, as a game of minimums unfolds between the characters, each of them desperate for ways to pass their time.  Depression gives way to comedy gives way to more lust for life than you came with.

David Lovejoy (Hamm) is a second-year, currently studying TAPS. This is his third production that he has worked on with UT; his previous roles in UT include Charles/First Lord/William in the 2013 production of As You Like It and Puck in the 2014 production of A Midsummer Night’s Dream. He is also a member of University of Chicago’s all male a cappella group Run for Cover.

Eric Stone (Clov) is a fourth-year in the college, performing in his first dramatic production for University Theater. He has performed with Off-Off Campus in such shows as Beerfest at Tiffany's and Gold, Frankincense, and Myrhh-der: A Christ-mystery.

Alex Hearn (Nagg) is a second-year in the College. This is his first UT mainstage. He has recently appeared in the TAPS Acting Studio A Streetcar Named Desire directed by Audrey Francis. He also performs with Commedia dell'Arte as Pulcinella and directed a workshop The Still Alarm last spring.

Eloise Hyman (Nell) is a second-year History/Jewish Studies major. Last year she was in A Midsummer Night's Dream and the fall quarter musical theater workshop called Barely There.

Julia Santha (Director) is a third-year student at the College, studying Theater and Performance Studies and Law, Letters and Society. Within UT, Julia has directed Sam Shepard's Fool for Love, a workshop of Act I of David Mamet's Boston Marriage, assistant directed Kenneth Lonergan's This Is Our Youth, assistant set designed for Henry VI, and assistant props designed for The Hamletmachine. Julia is so grateful for this opportunity and for everyone who has made it possible.

Natalie Wagner (Stage Manager) is a second-year in the College majoring in Law, Letters, and Society with a minor in TAPS. She was the Assistant Stage Manager on Hedda Gabler, Grey Gardens, Godspell, and Buried in Bughouse Square: A Studs Terkel Circus; she also assistant set designed Cabaret and has participated in Theater[24] multiple times. She serves on UT's Student Committee. Outside of UT: props for The Club (Urban Stages); internships with New York International Fringe Festival and West Village Musical Theater Festival.

Caroline Veniero (Production Manager) is a second-year History major in the College. This is her first show as a production manager. She previously worked as an assistant production manager on the Spring 2014 Dean's Men production of Much Ado About Nothing.

Victoria Grose (Costume/Makeup Designer) is a third-year Biological Sciences major in the College. She has been involved in University Theatre since fall quarter her first year; previously costume designing Cabaret, Fool for Love, High Art: Commedia presents Hamlet and the The Drowsy Chaperone, and assistant costume designing B-Side Studio, Hotel Nepenthe and The Glass Menagerie.

Michael Roy (Master Electrician) is a third-year Chemistry major. He has worked on team lights for several UT shows, including Grey Gardens (ALD) and the Dean's Men's productions of A Midsummer Night's Dream (ME) and Much Ado About Nothing (ALD).

Alexandra Garfinkle (Co-Props Designer) is a fourth-year Theater and Performance Studies major. She has trained at Black Box Acting Studio, serves on Committee and has garnered more than a dozen credits as a designer, dramaturg, and director. Currently, Garfinkle is the assistant director for A Christmas Carol at the Goodman Theatre and is directing University Theater's winter production of Amadeus.

Colin Garon (Co-Props Designer) is a first-year in the College tentatively planning to major in Linguistics. This is his first UT show. Recent acting/technical theatre work: You Can't Take it With You, Rosencrantz and Guildenstern are Dead, and Macbeth.

Lauren Eames (Lighting Designer) is a second-year Religious Studies Major. She has worked with UT for Buried in Bughouse Square: A Studs Terkel Circus (ME); Godspell (ME); Fool For Love (ME); The Hamletmachine (ALD).  She has also designed lights for UChicago MAYA and Le Vorris & Vox. She is a curator for Theater[24] and a member of Student Tech Staff as Assistant North Campus Theater Manager.  She appears on stage with UChicago Commedia's ensemble as Pantalone.

Jacob Mulcahy (Set Designer) is a fourth-year Physics major. This is his first time as a lead designer for a UT show, but in the past he has worked as either an Assistant Set Designer or Master Carpenter on various shows, including This Is Our Youth, The Merchant of Venice, Hedda Gabler, Godspell, and Sleuth.

Maya Festinger (Sound Designer) is a fourth-year in the Romance Languages and Literatures department.  Having served as assistant sound designer for last year's Fool for Love.

Eleanor Clifford (UT Committee Liaison) is a third-year HIPS and TAPS major. She is the Treasurer of UT's Committee and has also acted in such UT shows as Hedda Gabler (Hedda), Henry V (Rutland), and The Real Thing (Annie). She currently performs with Le Vorris and Vox Circus.

Alice Sheehan (Assistant Lighting Designer) is a first-year, possible TAPS or International Studies major. This is her first UT show at the University of Chicago.

Emma Heras (Assistant Stage Manager) is a first-year hoping to major in Geophysical Sciences with a focus in Paleontology. This is her first time working on a production with University Theatre.

Nahime Aguirre (Costume/Makeup Assistant) is a third-year studying Political Science in the college. This is her second time involved in a UT show, but the first time in technical staff.

Zoë Naidoo (Costume/Makeup Assistant) is a third-year studying Philosophy and Computer Science in the college. This is her first time involved in a UT production.

Kevin Freese (Tech Staff Liason) is a third-year Math and Computer Science major in the College.