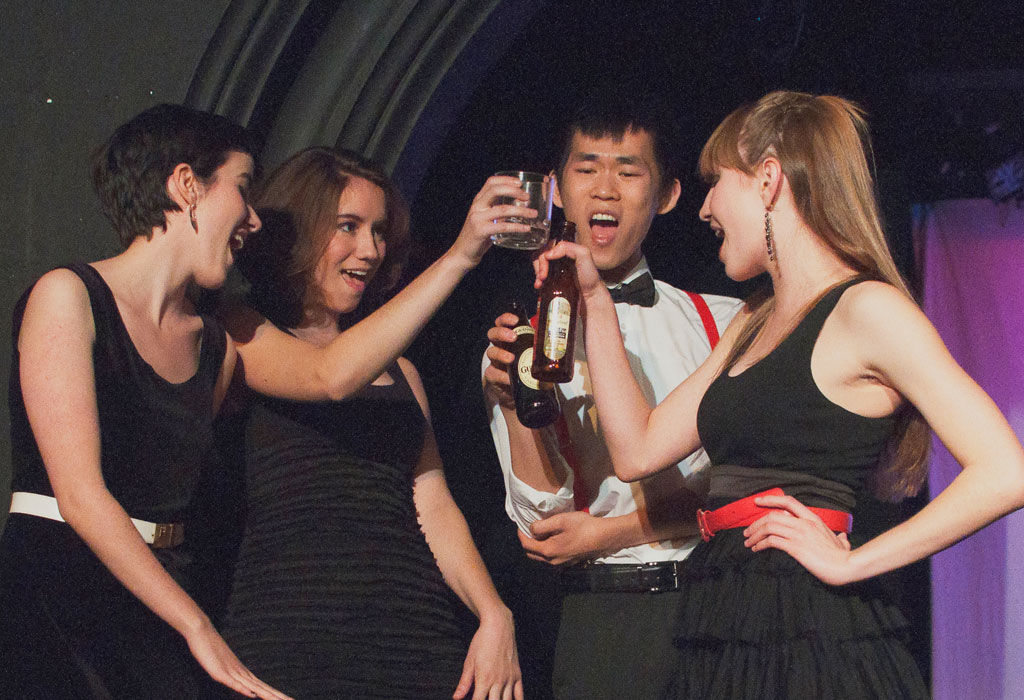 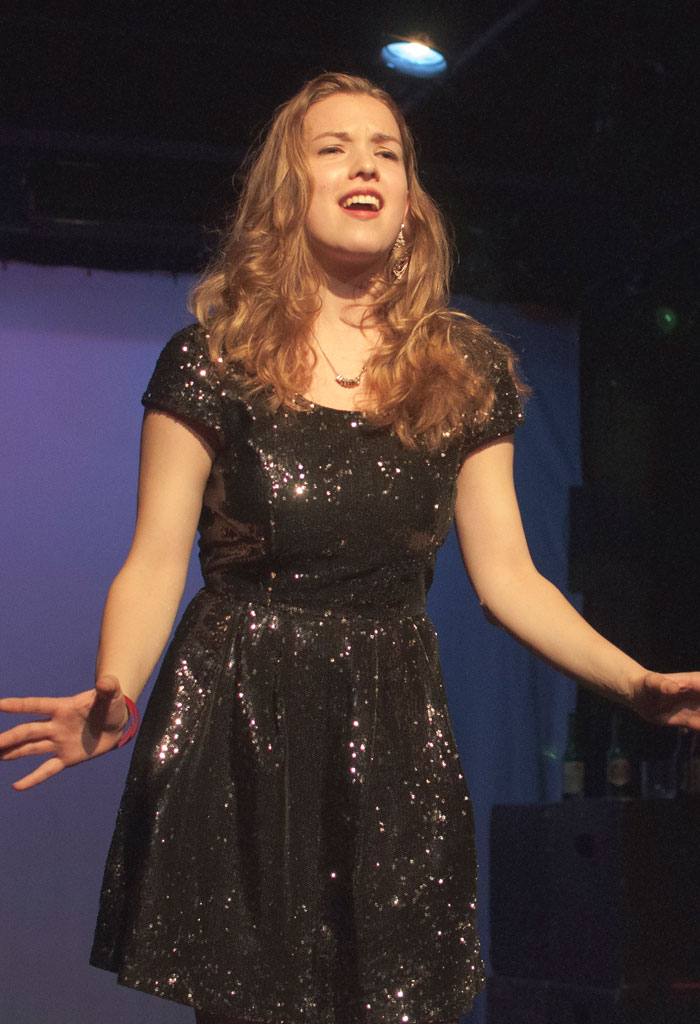 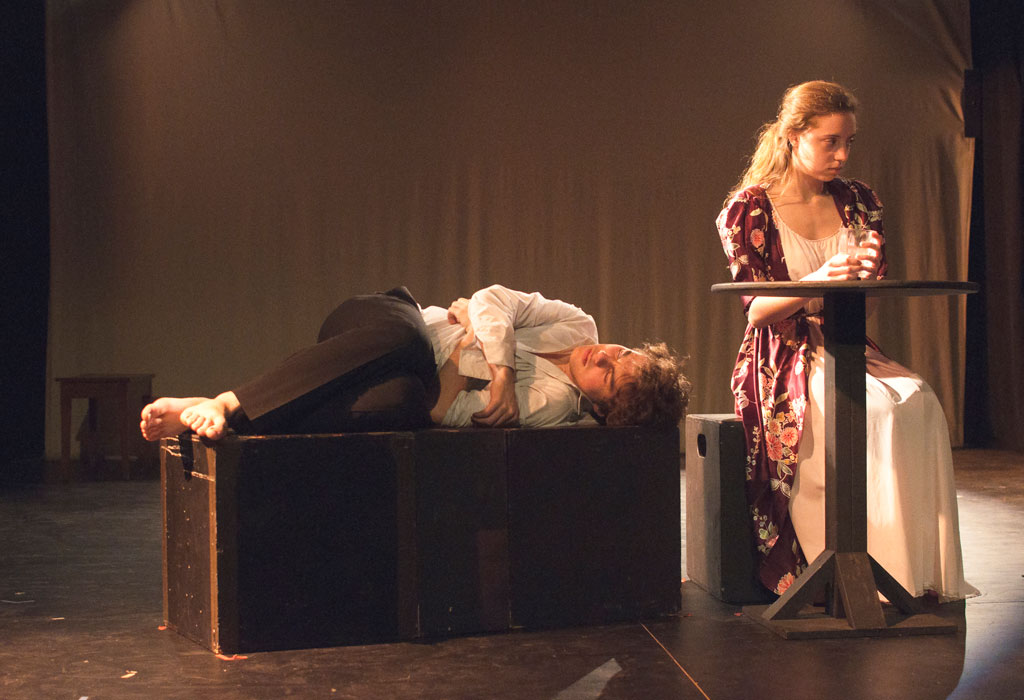 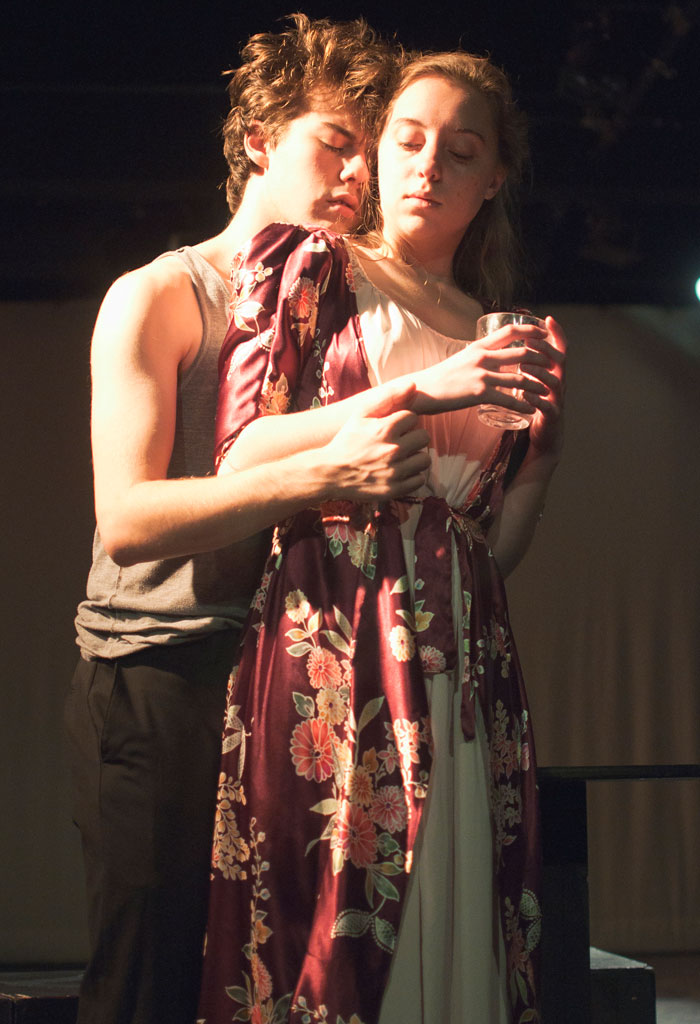 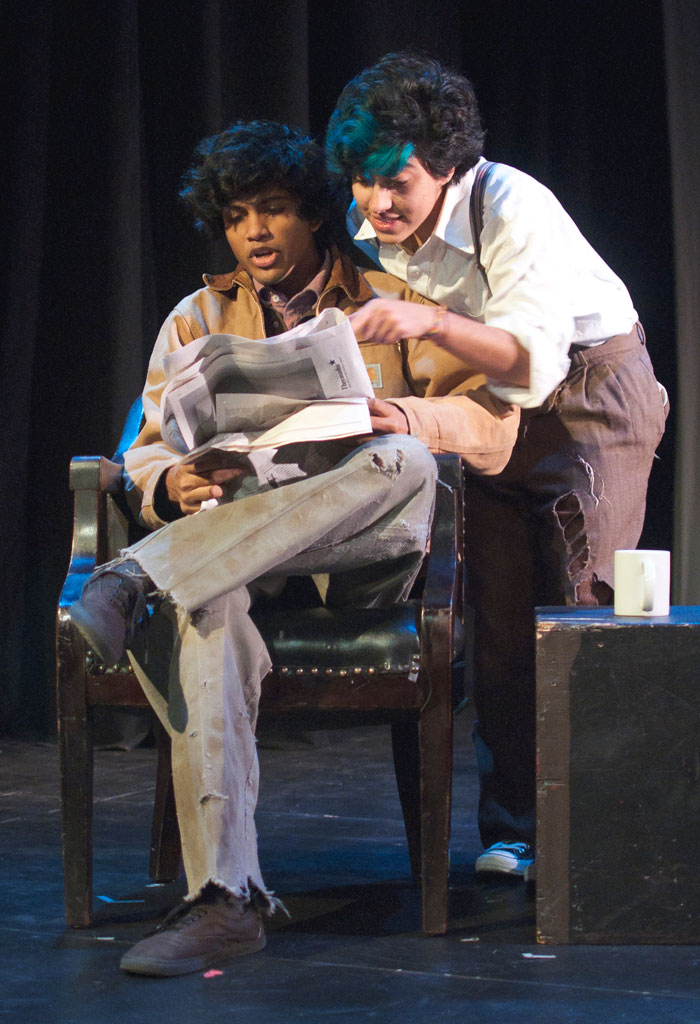 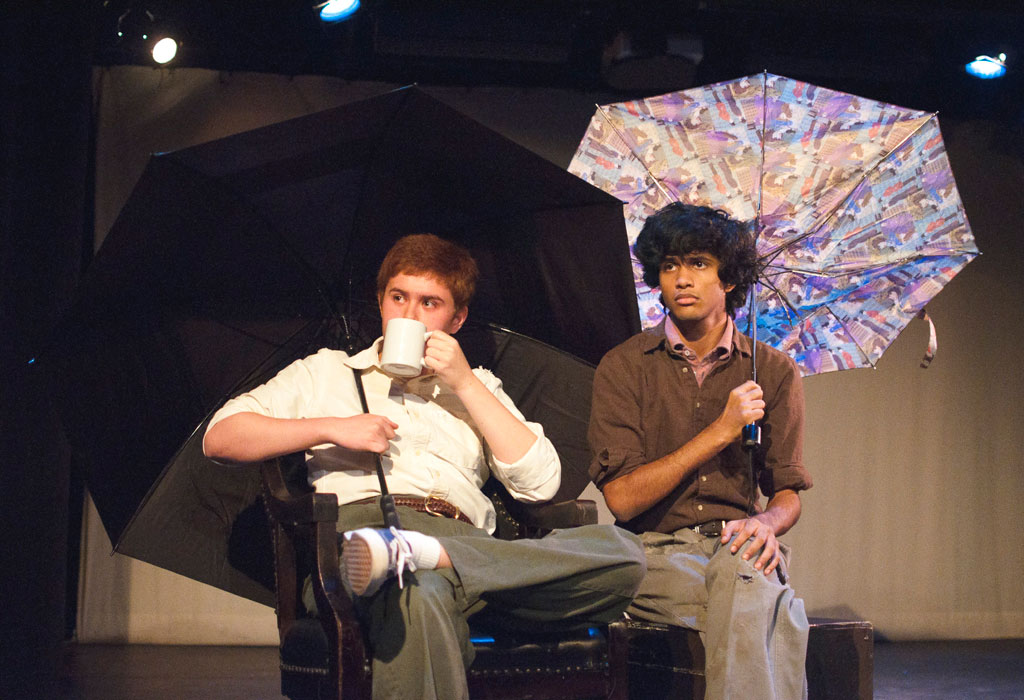 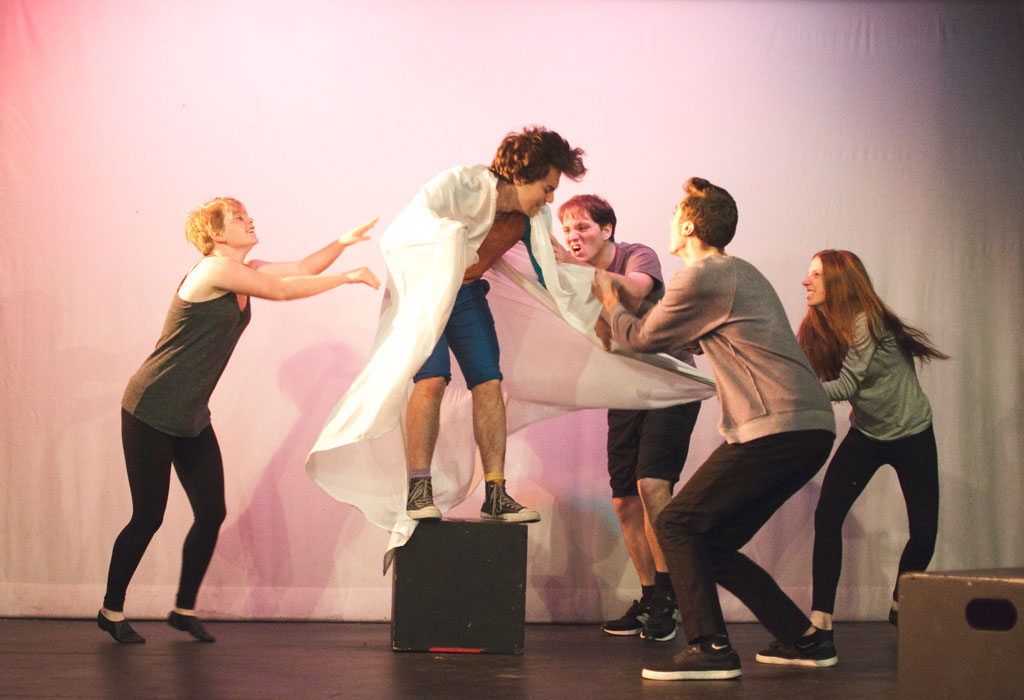 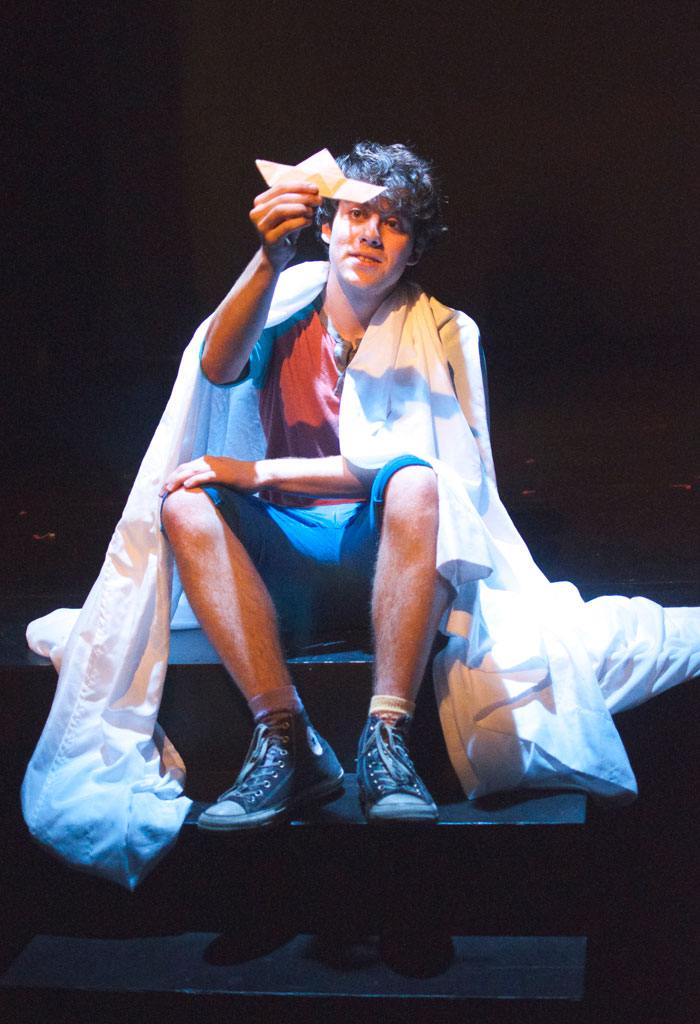 A Weekend of Workshops offers a stage to directors, devisers, and performers hoping to exercise and explore their craft. This Fall our workshops investigate every facet of the human experience. In What a Wild Party! Itzel Blancas presents the flash and fluster of a prohibition era soiree in search of sex and heartbreak. Wild Thing, directed and devised by Sarah Kim, is a rambunctious take on a well-worn childhood story. David Goodman-Edberg directs Drowning, a tender and puzzling tale of lost innocence. And in Talk to Me Like the Rain and Let Me Listen... Adam Johnson shapes a bleary and passionate couple's frayed wits and aimless love.

Elizabeth Ortiz (Queenie) is thrilled in the What a Wild Party! workshop. This is her first production with UT, but she has done musical theater work in the past, namely in productions of Guys and Dolls, Oklahoma, and Shrek the Musical. As a first-year she has not yet declared a major, but is considering International Studies, Molecular Engineering, and Physics with a concentration in Astrophysics.

Clair Fuller (Dolores) is a third-year in the college majoring in Gender & Sexuality Studies and English. She has previously appeared in Much Ado About Nothing ("Donna Joan" or Don Jon), No Exit (Estelle), The Vagina Monologues (V-Squad), and Theater[24].

Peyton Walker (Kate) is a first-year and an intended Visual Arts and/or Art History major. She is excited to be in her first UT production and excited to participate in more shows.

Andrew Mao (Black) is a second-year TAPS major and is tremendously excited to take part in his first UT Workshops production. Past credits include: The Huntsman in Le Vorris and Vox's Oz, The Sandman in Le Vorris and Vox's The Sandman's Wake, Agamemnon in CES Iron Bridal Feast, and The Clouds in Theater [24]. He is aslo taking  part in the upcoming UT production Macbeth as assistant choreographer.

Kathryn Vandervalk (Mae) is a third-year in the college, majoring in English Language and Literature. She had been a part of two Weekend of Workshops in the past, as the Flower Seller in First Love and an ensemble member in a devised musical theater piece by Daniele Wieder. On campus, she has also performed with Le Vorris and Vox Circus, and has been a 5-time Theater[24] participant.

Neal Jochmann (Burrs) is a second-year studying computer science and linguistics. This is his first time on the UT stage.

Itzel Blancas (Director) is a second-year majoring in English. She has previously worked on Godspell, Hedda Gabler, and Macbeth as an Assistant Costume Designer and on Much Ado About Nothing as the Assistant Director. She is excited to be making her directorial debut with Fall Workshops 2014!

Martha Templeton (Stage Manager) is a fourth-year Math major. She has been involved in many UT productions, including: Sleuth, Godspell, Clean House, Hamletmachine, Drowsy Chaperone, Principia Circusatica, and The Real Thing, as well as many productions with other groups on campus.

Nick Sidoran (Musical Director) is a third-year TAPS major and Music minor. This is his first time music directing for UT! Previous music directing credits include The 25th Annual..., The Fantasticks, and The Threepenny Opera. Acting credits in UT include Jesus in Godspell and George Gould Strong in Grey Gardens. In addition to performing in and producing musical theatre, he teaches voice and piano lessons in the Hyde Park area.

Sayri Suarez (Choreographer) is a third-year Computer Science major.  She has previously been involved in A Weekend of Workshops (Winter ’13), Godspell, and Buried in Bughouse Square.

Steven Vincent (Wild Thing) is a second-year who plans on majoring in Storytelling through Interdisciplinary Studies in the Humanities (if he can get it approved). This is his debut UT production.

Coriander Mayer (Wild Thing) is a first-year in the college and worked with UT earlier this year as a designer for Theater[24]. She is from Colorado, where she spent the last year performing with a Denver improv troupe. Her previous scripted roles include Yente in Fiddler on the Roof and one of the Delta Nu sisters in Legally Blonde.

Jackson Ruzzo (Max) is a second-year Physics major in the College.  Jackson also plays The Man in Tennessee William's Talk to Me Like the Rain and Let Me Listen... Previous roles in UT include Milo Tindle in Sleuth and Justin in Springwood Central Honors Society.

Sarah Kim (Director) is a second-year in the college. This is her first time directing for UT. Her previous UT credits include Grey Gardens (Assistant Director), Godspell (Assistant Dramaturg), The Clean House  (Assistant Lighting Designer), and Sleuth (Props Master).

Tiffany (Tippo) Wang (Stage Manager) is a second-year undecided major. She is employed as a member of the UT/TAPS tech staff as Master Carpenter. She has previously worked on Grey Gardens (Master Electrician), Voices (Lighting Designer), Iron Bridal Feast (Lighting Designer) and a number of other shows as a light board op. This quarter she looks forward to building beautiful sets, stage managing Wild Thing, and assistant lighting designing CES’s Life of Galileo and UT’s Macbeth!

Maggie Strahan (Woman) is a first year in the college with an undeclared major. This is her first show with UT. Recent theatre credits include Heather Wellington in The Awesome 80's Prom, Mrs. K in Confessions, and the Wicked Witch in The Wizard of Oz.

Jackson Ruzzo (Man) is a second-year in the college.  See Where the Wild Things Are.

Adam Johnson (Director) is a second-year in the college and a potential Econonomics major and English minor. With UT he has appeared in Grey Gardens and A Little Star Quality, has assisted directed for Godspell, and this quarter is the dramaturg for Macbeth. He is also a member of UT Committee.

Madeline Fitzgerald (Stage Manager) is a second-year in the college majoring in English, and has previously acted in Hamletmachine and was Assistant Stage Manager for Cabaret. This is Madeline's third UT show, and her second as part of a stage management team.

Gautama Mehta (Roe) is a first-year student and undecided major from Brooklyn, NY.

Sherlock Ziauddin (Pea) is a second-year in the college.

Liam Philiben (Stephen) is first-year in the college

David Goodman-Edberg (Director) is a third-year TAPS major in the college. He has primarily functioned as a lighting designer for a number of on-campus theater and dance productions (most recently for the UT/TAPS production of A Streetcar Named Desire). This is his first foray into the slightly terrifying realm of directing. He is very excited that you came!

Sasha Ayvazov (Production Manager) is a fourth-year Math and English double major, who has been a part of 20 UT productions — as well as another 10 with Le Vorris and Vox, CES, and Attori Senza Paura — in a variety of roles, though he marks his UT acting debut in Henry V this quarter. He is a member of UT committee and is a curator for Theater[24].

Abigail Adams (Tech Staff Liason) is a third-year Gender Studies major. She has previously stage managed the UT productions of Merchant of Venice and The Clean House, as well as Le Vorris & Vox's The Sandman's Wake.

James Newton (Composer/ Sound Designer) is a self-taught musician. He is a third-year in the college studying english, physics, and creative writing. Previously, he composed and performed the score for UT/TAPS production of A Streetcar Named Desire, and he is excited to be making his UT debut.