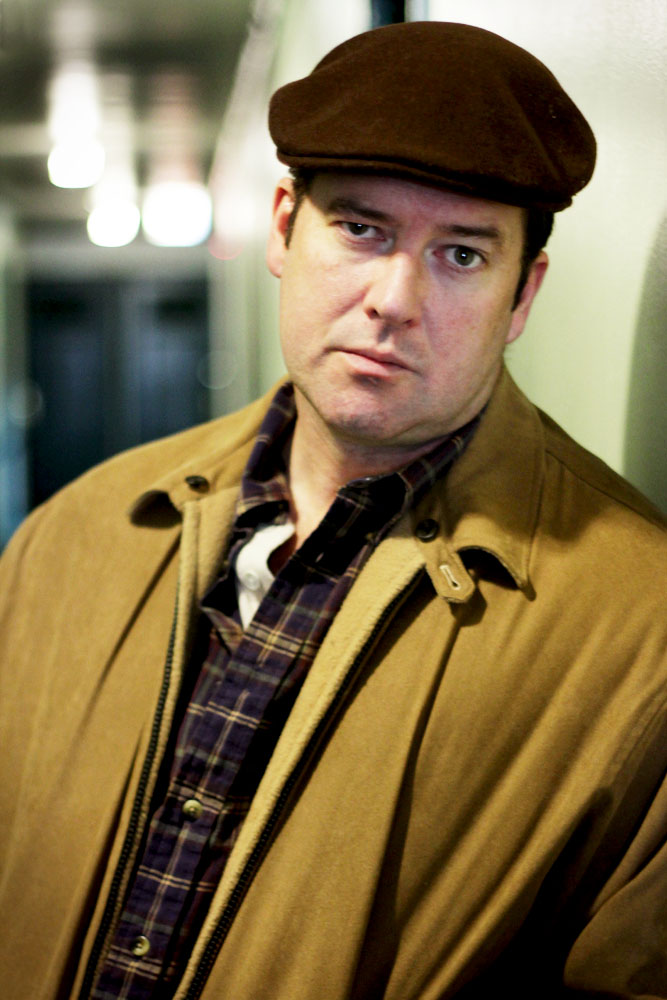 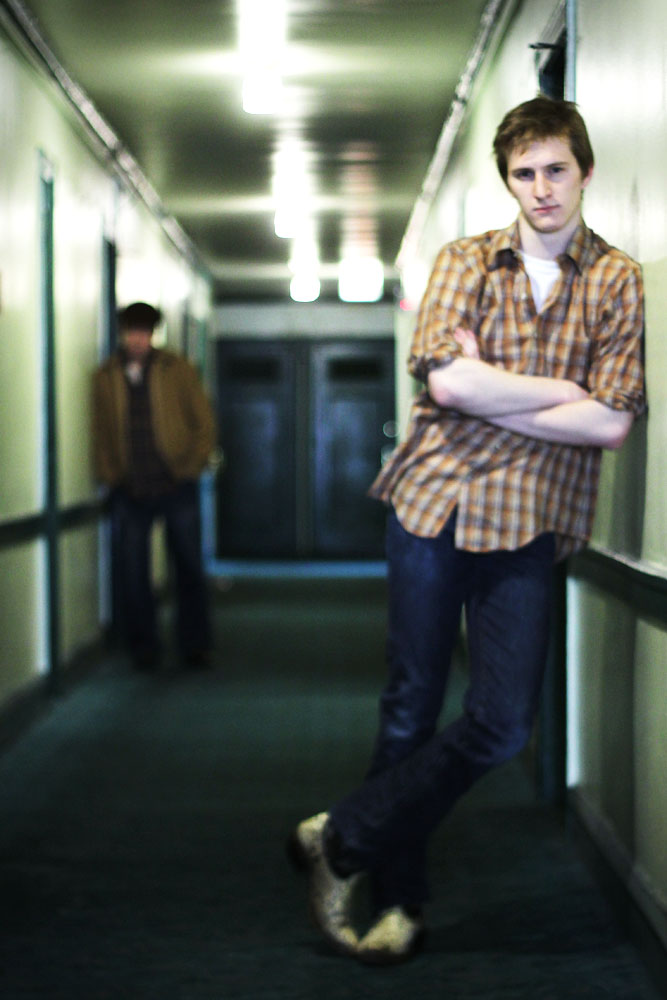 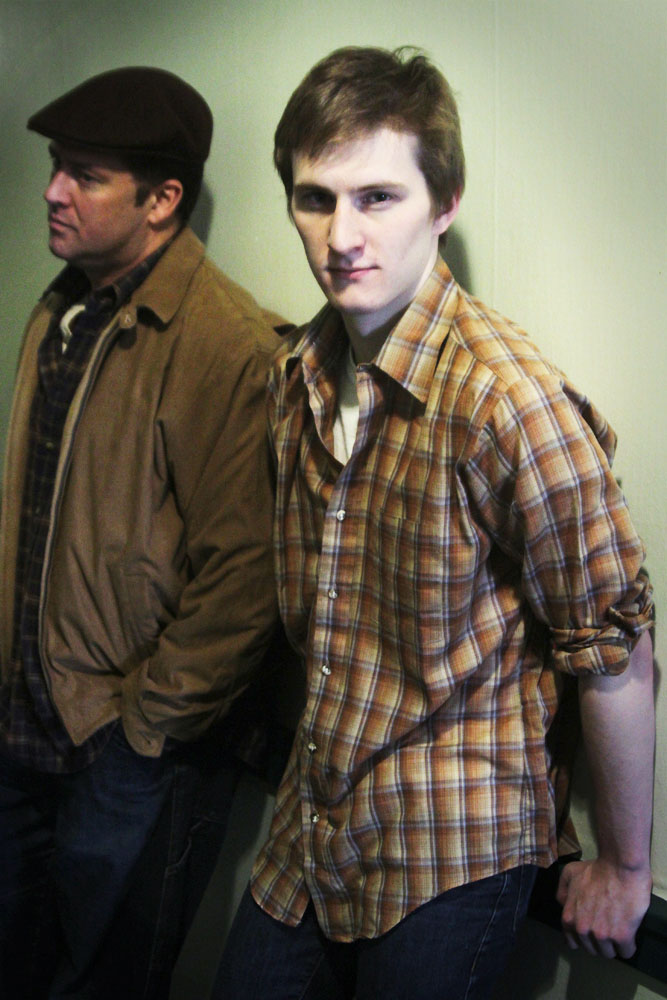 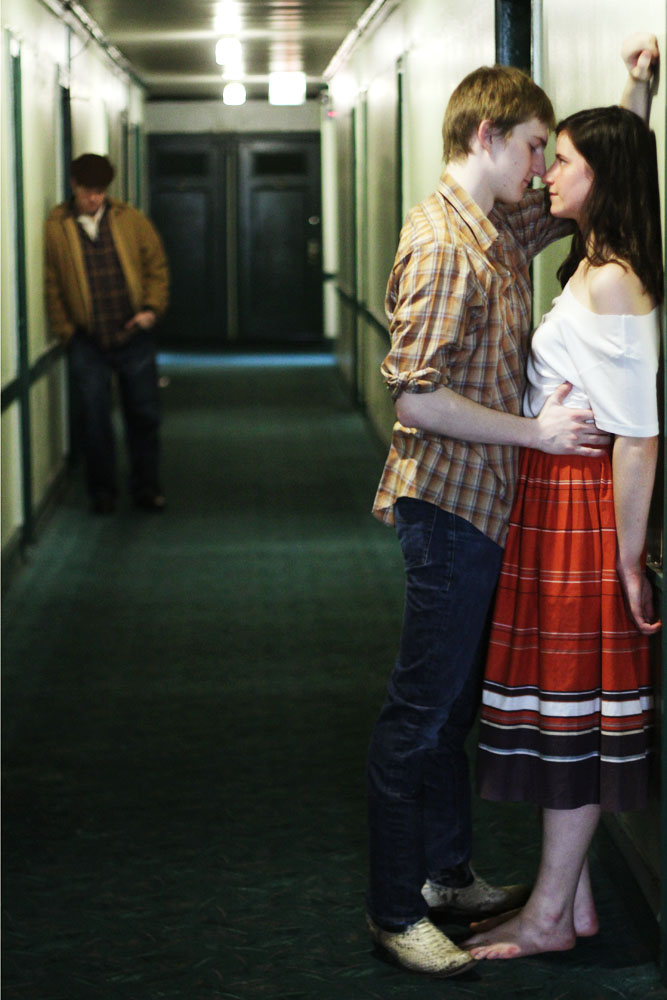 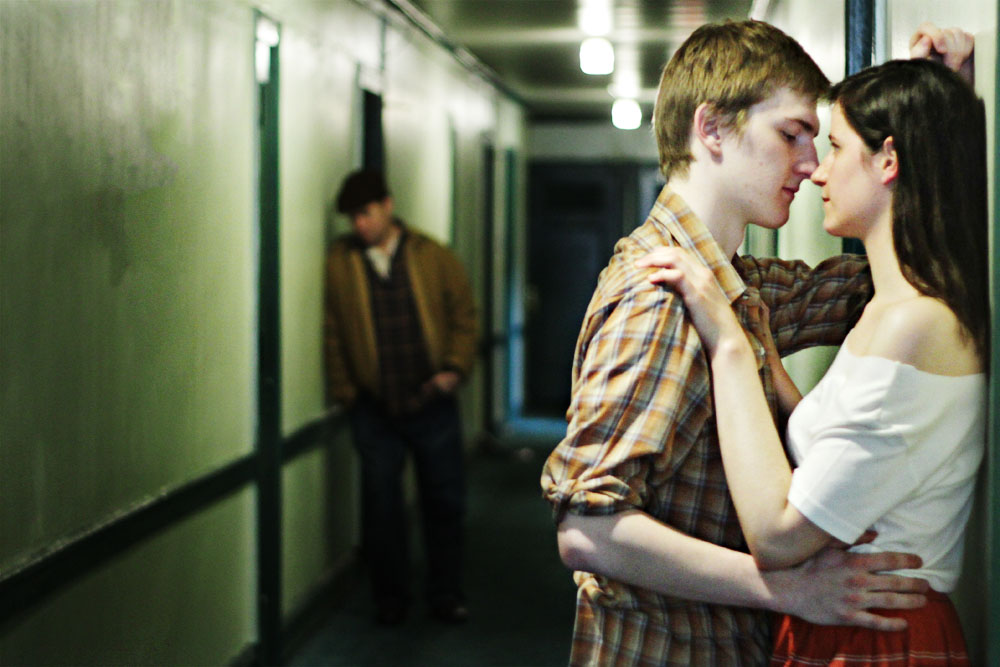 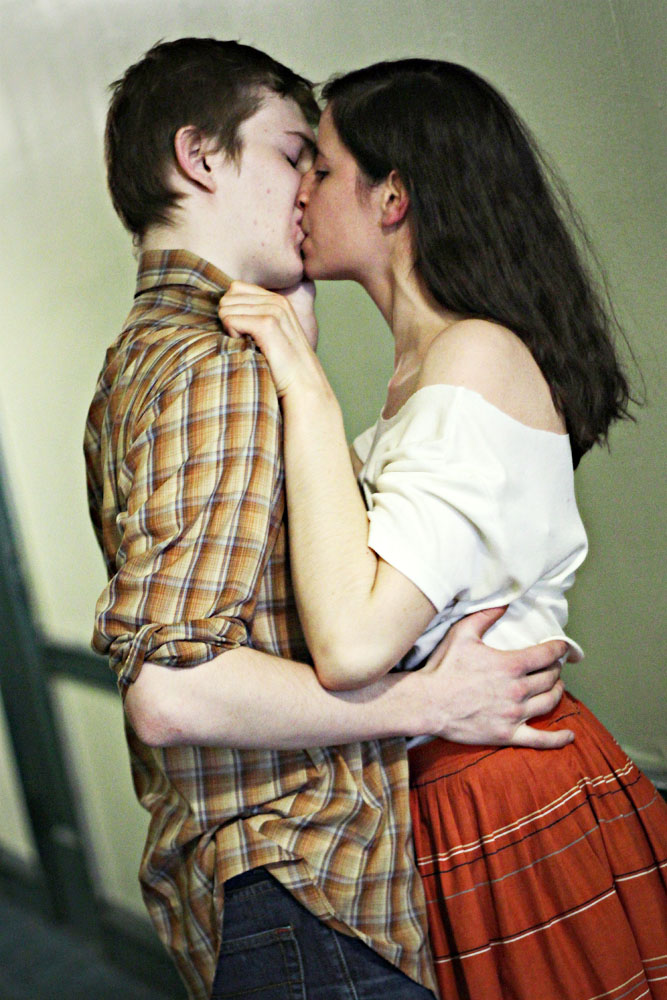 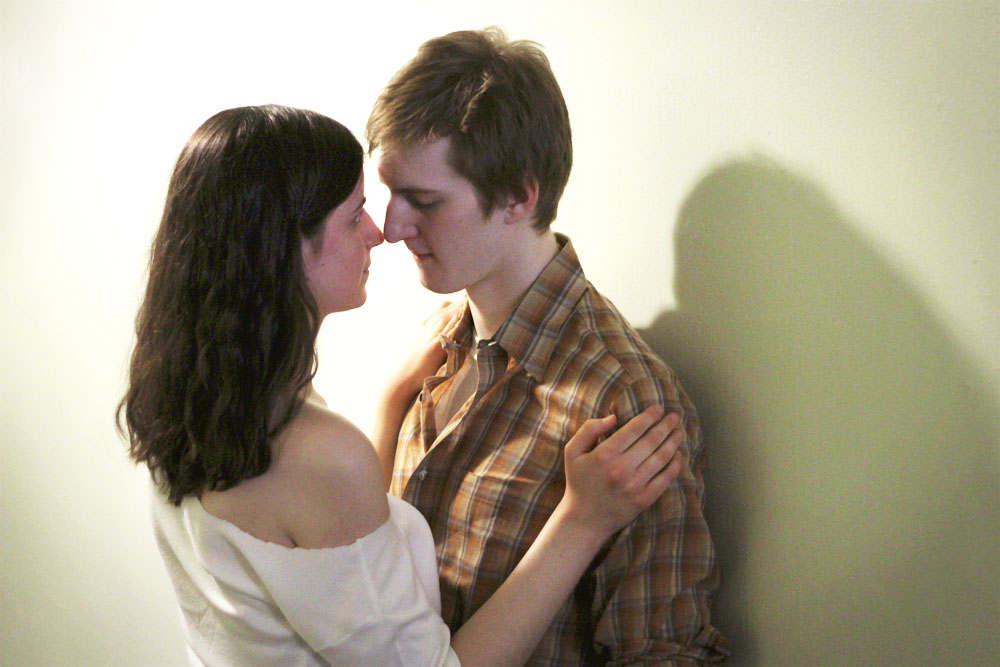 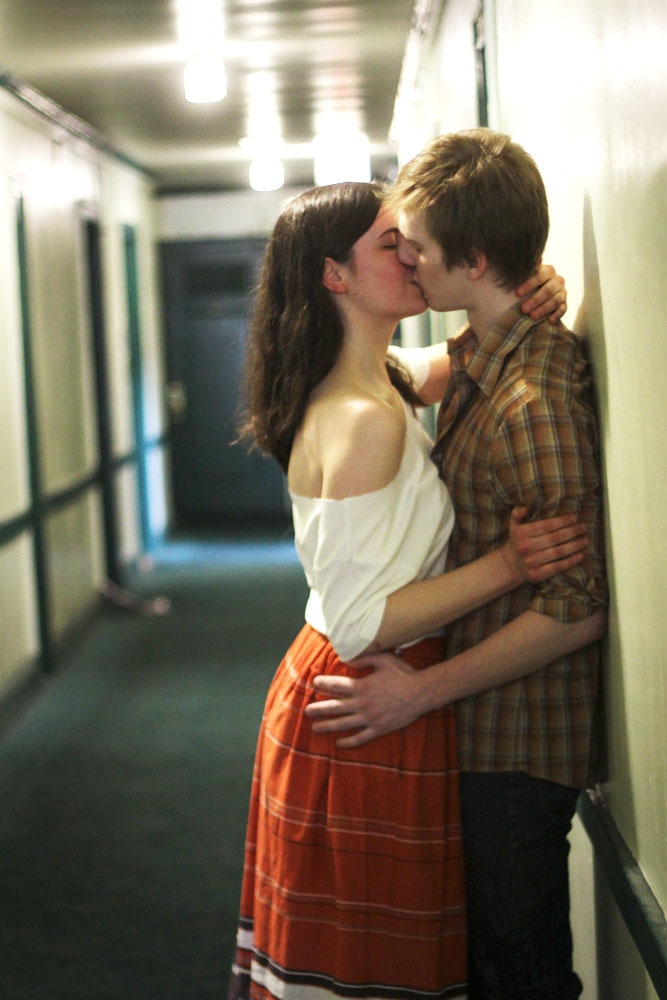 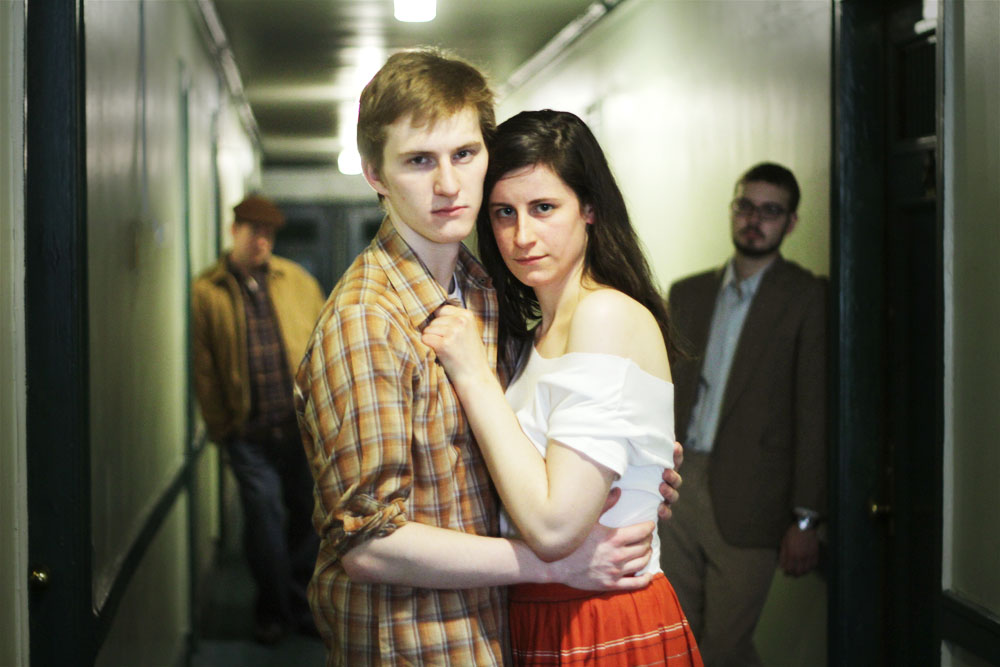 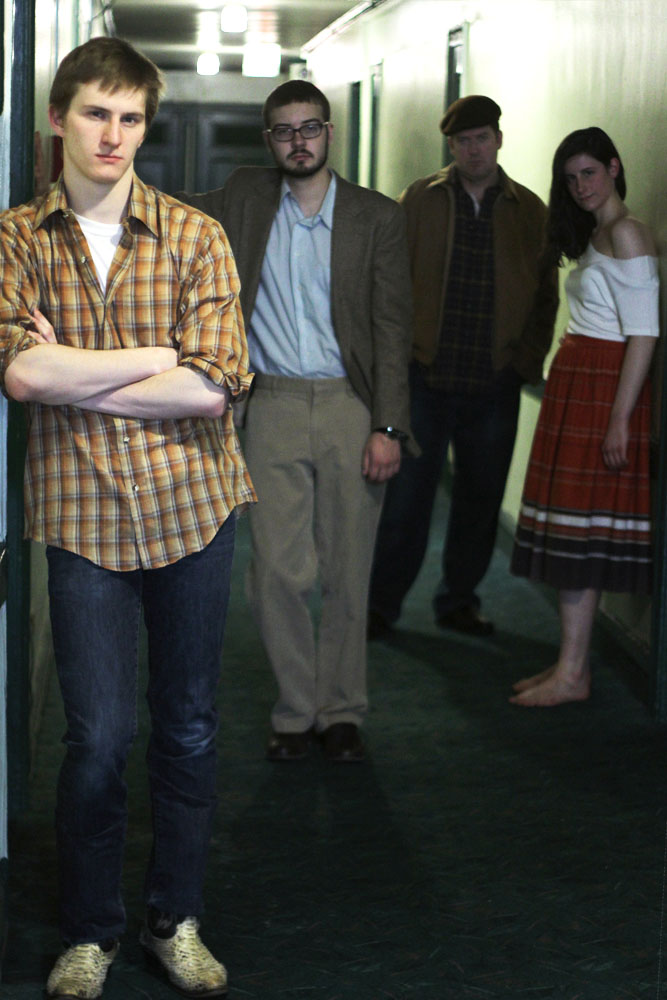 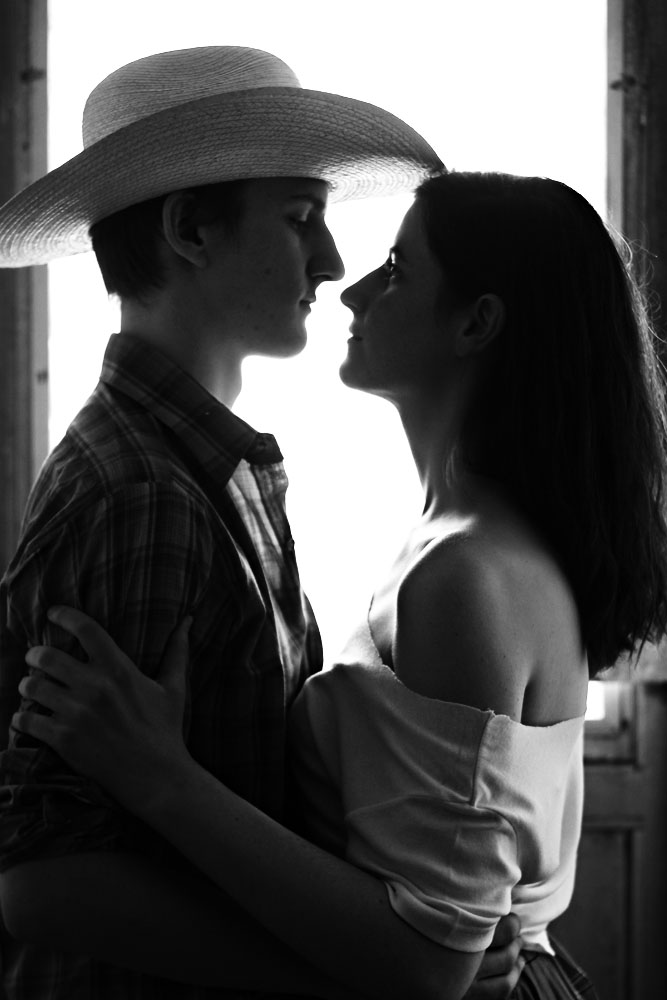 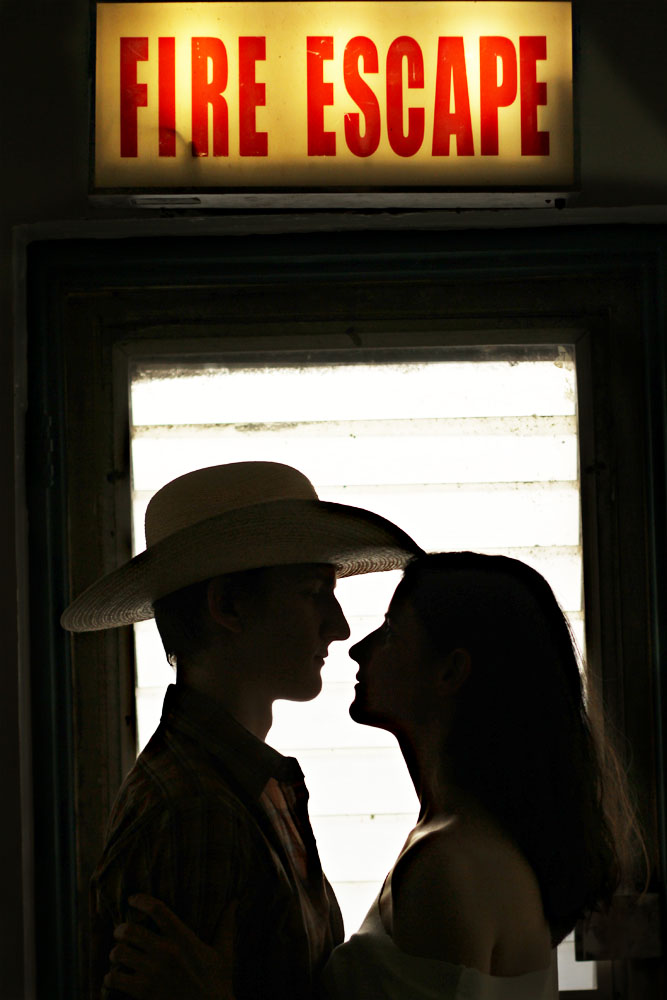 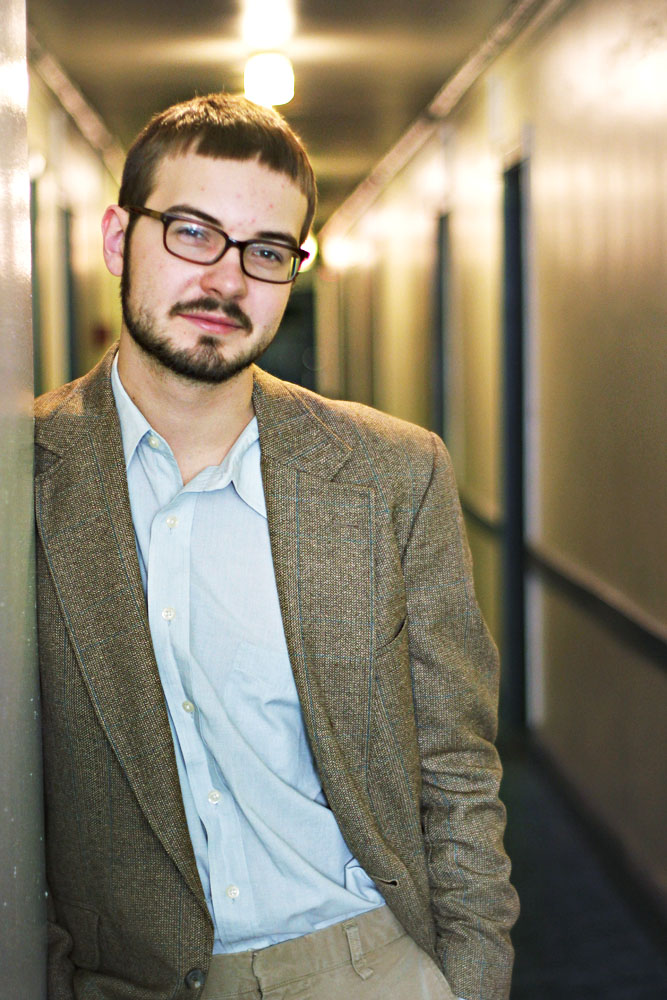 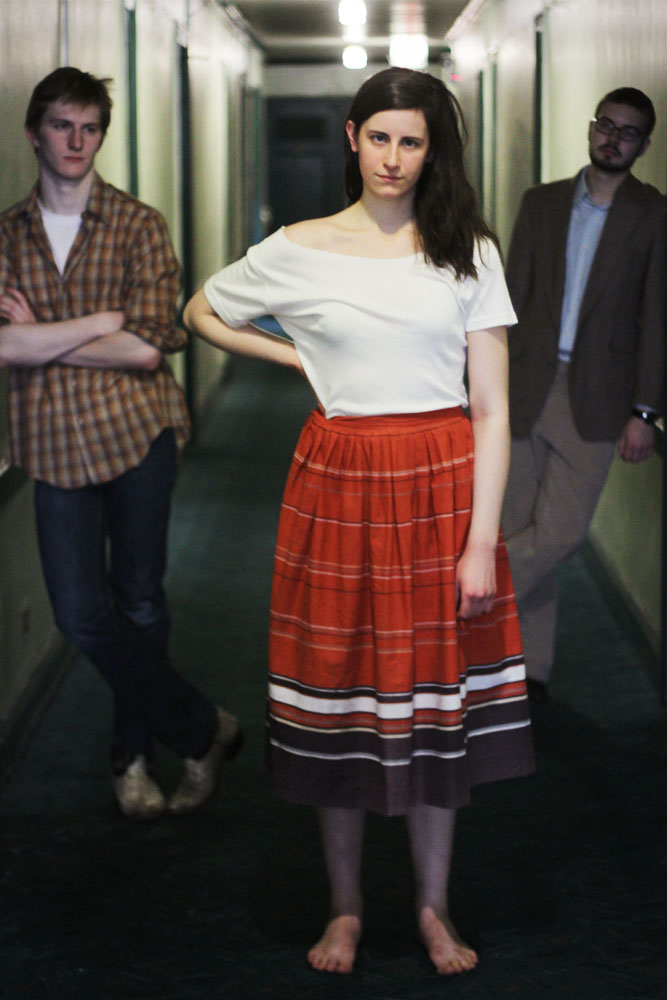 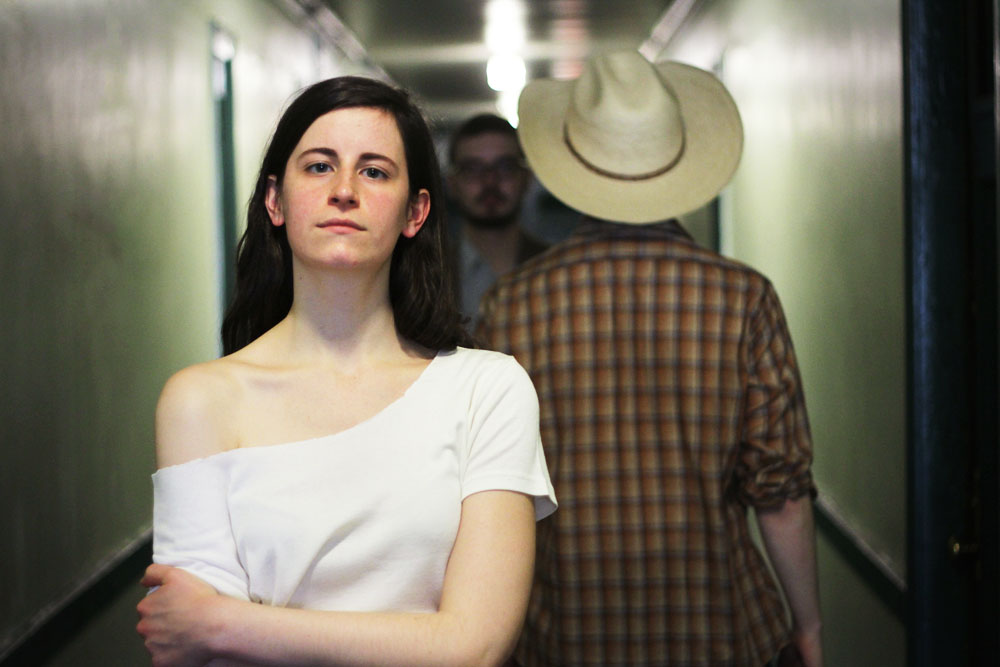 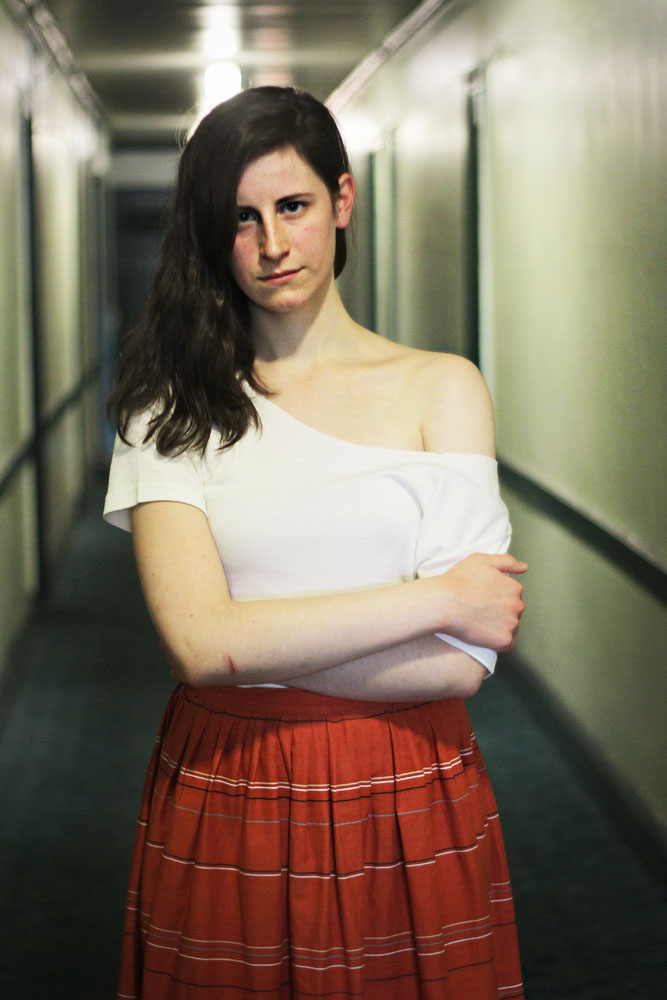 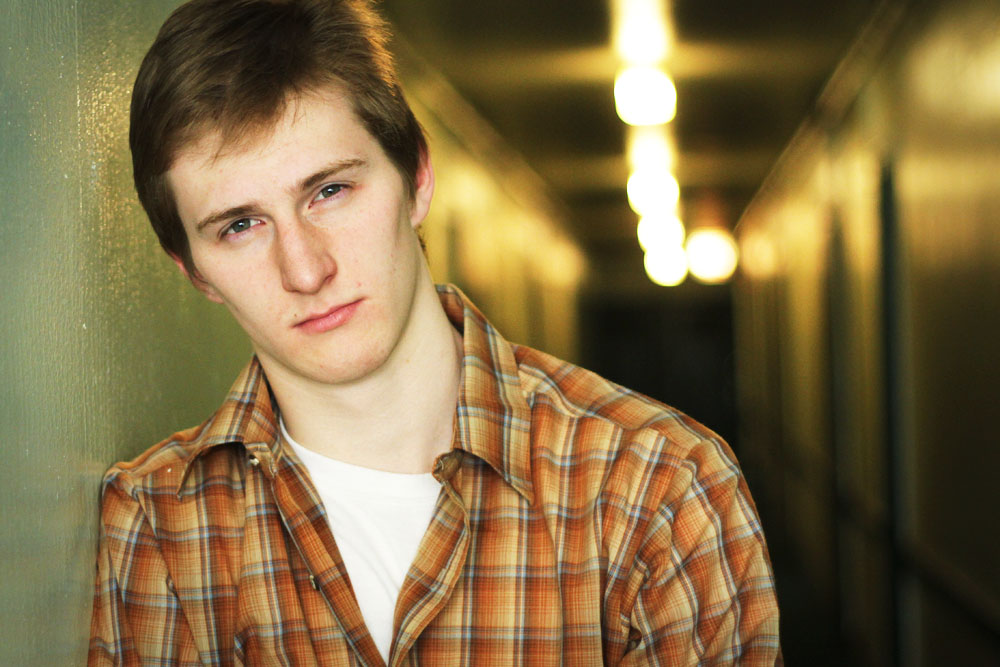 In a cheap motel room in the edge of the Mojave Desert, old flames May and Eddie struggle to quit their love affair. TAPS lecturer David New plays the Old Man, who may or may not even exist. Together they search for the difference between what is truth and what is remembered.

Lizzy Lewis (May) is a fourth-year in the College. She is a Comparative Literature major, studying music and French. Previous UT/TAPS credits include The House of Yes (Jackie-O), Hedda Gabler (Thea), The Credeaux Canvas (Tess), Into the Woods (Cinderella), and Much Ado About Nothing (Hero).

Jeremy Rodriguez (Eddie) is a second-year in the College.

Sam Blobaum (Martin) is a fourth-year in the College.

David New (The Old Man) is a lecturer in the Theater and Performance Studies Department here at U of C. He graduated from The Goodman School of Drama/DePaul University with a BFA in acting. Since then he has worked in Chicago and regionally as an actor, director, arts educator, and administrator. He has acted in over 70 productions including productions at Steppenwolf Theatre Company, Court Theatre, Goodman Theatre, Northlight, Marriott Lincolnshire, Chicago Shakespeare Theater, Victory Gardens, and Writer’s Theatre of Chicago. Regionally, he has appeared in productions at the Ontario Stratford Festival, Actor’s Theatre of Louisville, Huntington Theatre, Madison Repertory Theatre, New Jersey Shakespeare Festival, and Peninsula Players. Broadway and National Tour: Thou Shalt Not, and Scrooge (National Tour). Television: Law & Order SVU, All My Children, Walker, Texas Ranger, and the NBC mini-series A Will of Their Own. He was associate artistic director at Steppenwolf Theatre Company from 2004-2009.

Julia Santha (Director) is a second-year student at the College, double-majoring in Theater and Performance Studies and Law, Letters and Society. Within UT, Julia has directed a workshop of Act I of David Mamet's Boston Marriage, assistant directed Kenneth Lonergan's This Is Our Youth, assistant set designed for Henry VI,and assistant props designed for The Hamletmachine. Fool for Love is the first mainstage show that she has directed. Julia is so grateful for this opportunity and for everyone who has made it possible.

Bobby Huggins (Stage Manager) is a fourth-year Math major. After graduation, he intends to pursue stage management and design in Chicago. Bobby is a proud company member with First Floor Theater, and is grateful to have additionally worked with The Inconvenience, The New Colony, and Abraham Werewolf, Redmoon, and Circle Theatre. He is happy to be a part of Fool for Love, and hopes you enjoy this beautiful show.

Josie Glore (Production Manager) is a fourth-year in the College and is double majoring in Cinema and Media Studies and English. She has been working on UT shows since her first year in a variety of capacities. Her previous credits as a Production Manager include the Spring 2012 Workshops, The Merchant of Venice, and last quarter's As You Like It. She is excited and happy to be a part of this staff and hopes everyone enjoys the show!

Victoria Grose (Costume Designer) is a second-year Biological Sciences major. Previously, she was the costume designer for The Drowsy Chaperone and costume design assistant for B-Side Studio, Hotel Nepenthe and The Glass Menagerie.

David Goodman-Edberg (Lighting Designer) is a second-year TAPS major. He has designed lighting for a number of shows with UT, CES, and various dance groups on campus, most recently for the production of The Hamletmachine last quarter. He has also worked as a freelance designer and electrician around Chicago.

Sara Lu (Sound Designer) is a third-year majoring in Biology and Music. She has previously sound designed Reefer Madness, This is Our Youth, The Credeaux Canvas, The Drowsy Chaperone, Hedda Gabler, and assisted on The Homecoming and An Actor Prepares.

Riley Kreger (Scenic Designer) is a TAPS major and has previously designed the set for three UT shows, Reefer Madness: The Musical, The Glass Meenagerie, and Grey Gardens. He is a member of the Student Technical Staff, and has enjoyed working on many shows in a variety of roles.

Hilary Clifford (Dramaturg) is a fourth-year Religious Studies and Fundamentals: Issues and Texts double major. While this is her first show as a dramaturg, she has appeared in Grey Gardens (Little Edie) and Proof (Claire), and was the Assistant Props Master for The House of Yes. This January, she served as the text coach for Anna Deavere Smith's On Grace residency. She is the Chair of the University Theater Committee, and will forever be a proud member of the 25th Generation of Off-Off Campus.

Joe Foust (Fight Choreographer) is an actor/director/playwright/fight choreographer here in Chicago. His fights have been seen at the Goodman, Steppenwolf, Court, Chicago Shakespeare, Defiant Theater, American Blues, and many other companies around the world. He could probably take you in a fight, but would rather have cocktails with you.

Lauren Eames (Master Electrician) is a first-year Religious Studies Major. For UT: The Hamletmachine (ALD). She has also designed lights for UChicago MAYA and been a designer and assistant stage manager/assistant production manager for Theater[24].

Ijeoma Nwabudike (Assistant Costume Designer) is a first-year in the College. She is a Psychology major. This quarter, she will also be the assistant choreographer for Godspell.

Dhyana Taylor (Assistant Lighting Designer) is a first-year in the College and excited to be working on her second UT show. Last quarter, she worked as a lighting stagehand on The Hamletmachine.

Maya Festinger (Assistant Sound Designer) is a third-year Romance Languages and Literatures major in the College. This is her first time participating in a UT production.

Joey Houghton (Assistant Sound Designer) is a third-year Computer Science major. He has worked as an Assistant Lighting Designer on The Credeaux Canvas and Assistant Stage Manager for the workshop The Doctor and Ariel in the Tempest.

Kevin Freese (Tech Staff Liaison) is a second-year Math and Computer Science major. Previous UT credits include The Credeaux Canvas, The Hamletmachine, and The Drowsy Chaperone.