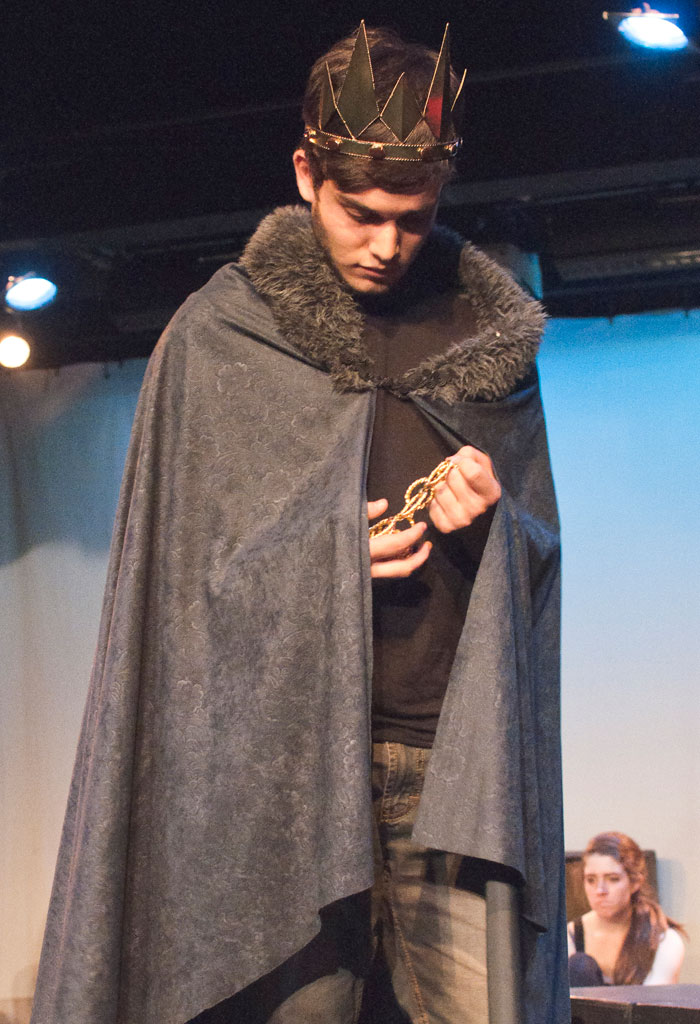 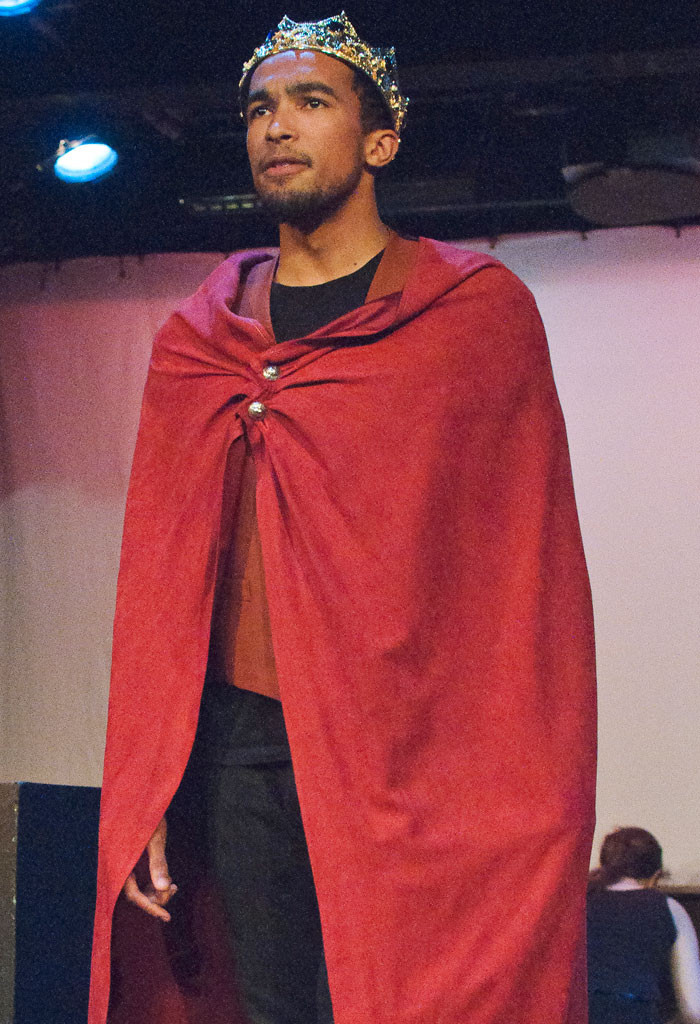 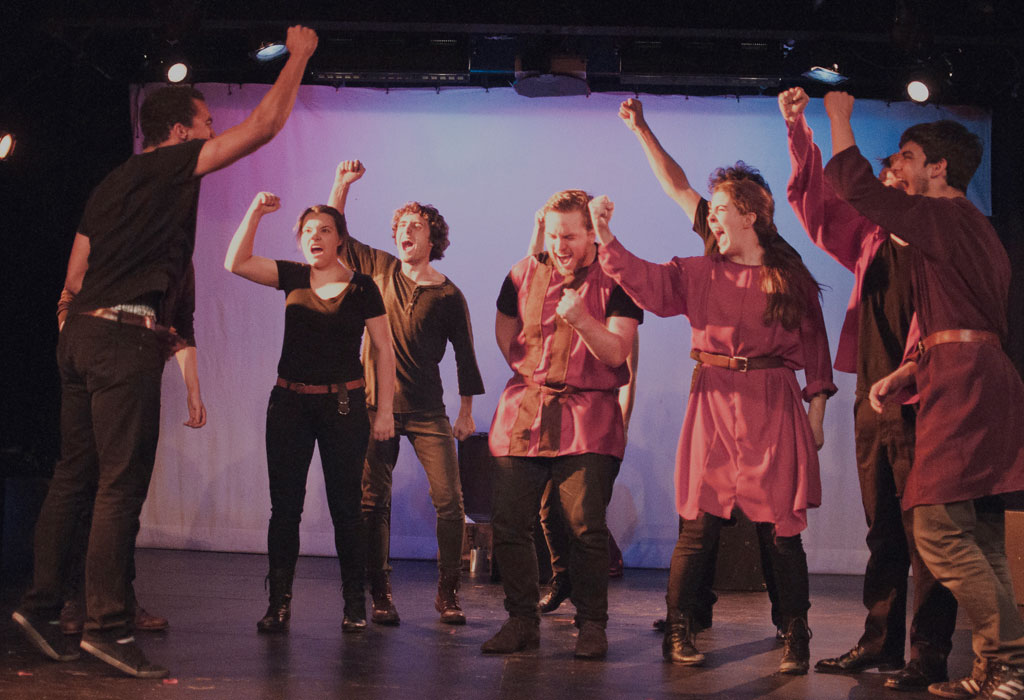 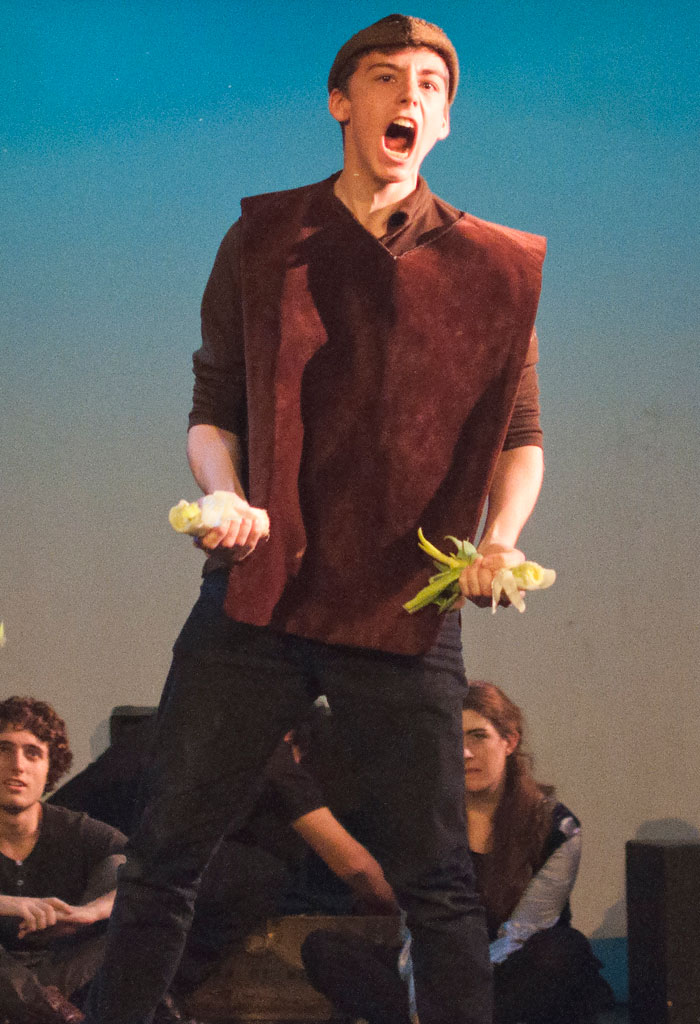 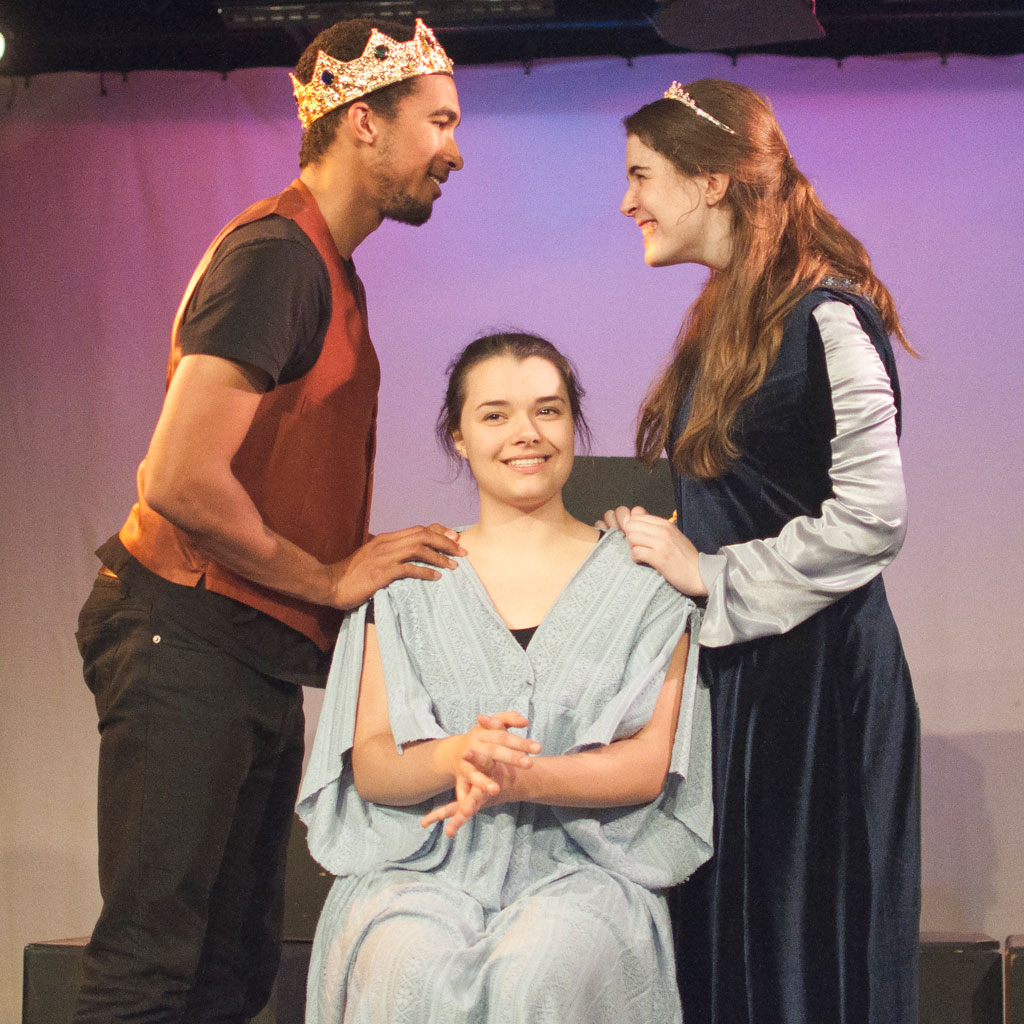 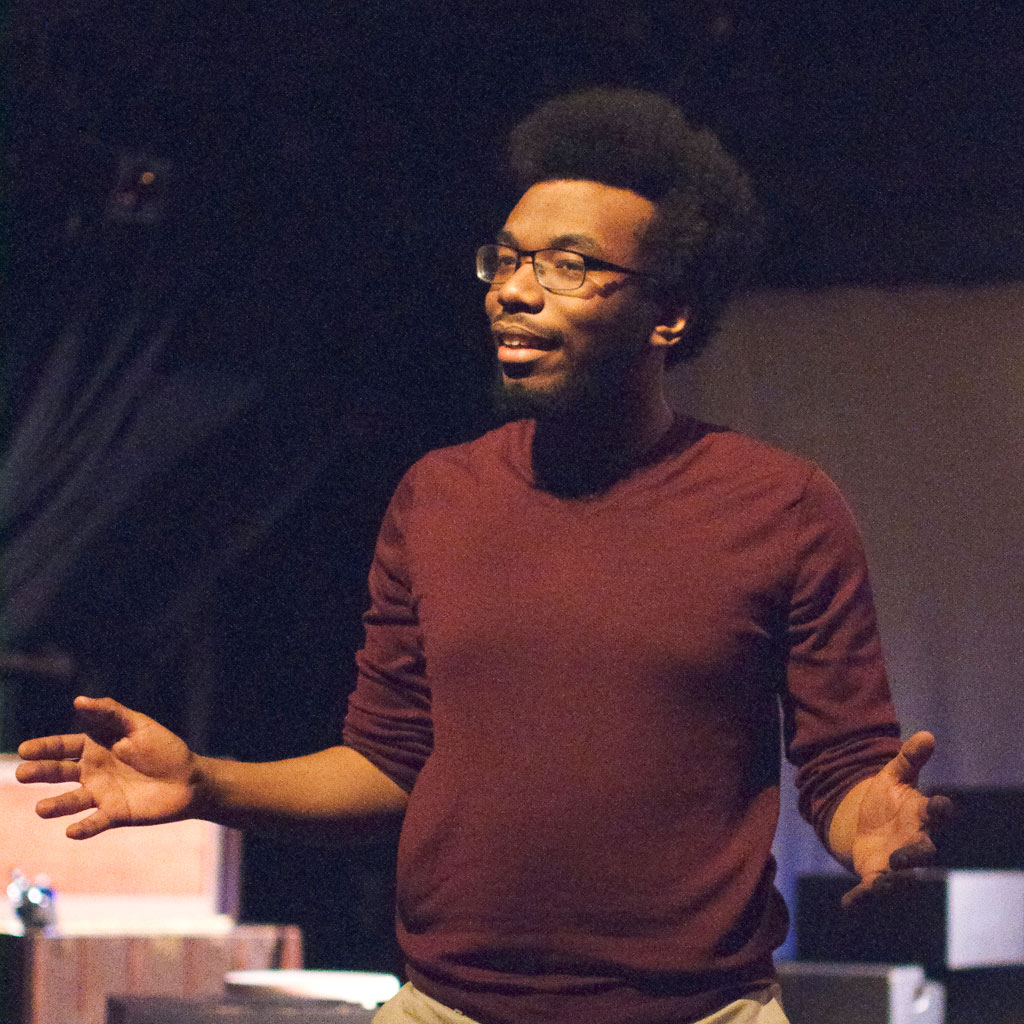 The Dean's Men play "the King's Men" in Jon Sorce's production of Henry V.  A ragtag chorus of Shakespearean players takes our stage and introduces our story: the defense of a dynasty under newly-crowned King Henry.  Just as the brave new monarch prepares to win an impossible victory against the French, the brave players prepare to perform and impossible spectacle with only a few blocks and some moxy.  Wars will wage, bombast will blast, and your spirits will most certainly rouse.

Chase Woods (Henry) is a second-year double-majoring in Theatre and Performance Studies and Public Policy. This is his second performance at the University, his first with the Dean’s Men.

Cameron Vanderwerf (Exeter) is a third-year English and TAPS major in the College. Past UT roles include Stanley in A Streetcar Named Desire, Ernst in Cabaret, Lysander in A Midsummer Night's Dream, Launcelot in The Merchant of Venice, and Billy in The Real Thing.

Xander Eichner (Dauphin/Williams) is a second-year in the College tentatively pursuing a Math/History double major. He acted last year in the fall Dean’s Men production As You Like It, the winter CES Fest show Thrill Me, and in the spring UT workshop A Crackup at the Race Riots.

Sasha Ayvazov (Canterbury/MacMorris/Constable/Burgundy)  is a fourth- year math and English double major, who has taken part in twenty UT productions — as well as another ten with Le Vorris and Vox, CES, and Attori Senza Paura — in a variety of roles, though he marks his UT acting debut in Henry V this quarter. He is a member of UT committee and is a curator for Theater[24].

Gus Mosse (Montjoy/Bardolph/Court) is a third-year English major in the College. He has previously appeared with the Dean's Men in A Midsummer Night's Dream (Snout), As You Like It (Orlando), Henry VI (Henry VI), and The Two Gentlemen of Verona (Valentine). He has also participated in New Work Week as an actor and Theater 24 as a writer. He serves as Social Chair for the Dean's Men.

Elise Wander (Boy/Governor of Harfleur/Queen Isabel) is a fourth-year in the college, majoring in Gender and Sexuality Studies and English. She has previously appeared in Much Ado About Nothing (Hero), The Clean House (Ana), The Glass Menagerie (Laura) and Cymbeline (Pisanio). She is also a member of Unaccompanied Women A Cappella.

Michela Voit (Katherine, Nym, Suffolk) is a second-year English and Public Policy major in the College. Her past Dean’s Men roles include Beatrice in Much Ado About Nothing, Helena in A Midsummer Night’s Dream, and Celia is As You Like It.

Colin Bresnahan (Fluellen/Erpingham/Soldier #1) is a fourth-year Political Science major in the College. This is his fifth show with The Dean's Men and sixth with University Theater, having previously worked on The Two Gentlemen of Verona (Director), Cymbeline (Caius Lucius), Twelfth Night (ME), The Bear (Director), and Henry IV, Part 1 (ASM). Colin is also the President of The Dean's Men.

Jonathan Sorce (Director) is a second year in the college majoring in Physics and Mathematics. This is his fourth consecutive show in the Dean's Men, having previously worked on A Midsummer Night's Dream (Assistant Director) and having acted in As You Like It (Corin) and Much Ado About Nothing (Conrade).

Mariel Schlomchik (Stage Manager) is a second-year Biology major in the college. Previously, Mariel has assistant-stage managed Dean's Mens shows As You Like It and Much Ado About Nothing, and assistant-directed The Clean House.

Cambria Whitcomb (Production Manager) is a third-year in the College majoring in Visual Arts. This is her second show with both the Dean's Men and UT, the first being A Midsummer Night's Dream.

Shuwen Qian (Scenic Designer) is a fourth-year in the College. Previous show credits with UT/TAPS include Sleuth, The Hamletmachine, The Drowsy Chaperone, Principia Circusatica, Hotel Nepenthe, and A Weekend of Workshops: Chekhov (Production Manager); B-Side Studio, The House of Yes, and The River Jordan: A Victorian Circus Tale (Asst. Production Manager); Godspell (Music Director); and the workshop Philip Glass Buys a Loaf of Bread (Director). He has formerly served on TAPS's student administrative staff and UT's student committee.

Abigail Adams (Props Designer) is a third-year Gender Studies major. She has previously stage managed UT productions of Merchant of Venice and The Clean House, as well as Le Vorris & Vox's Sandman. This is Gayle's first production as props designer.

Michelle Ross (Costume Designer) is a second-year majoring in both Computer Science and Music. Previously, she has assisted with costuming the musicals Grey Gardens and Cabaret. She also helped with lighting and running the cue board for A Midsummer Night's Dream.

Kevin Freese (Lighting Designer) is a third-year Math and Computer Science major. He has previously designed Much Ado About Nothing and A Midsummer Night's Dream, and has been an electrician on many other productions at UT. Kevin is also a member of Tech Staff.

Greg Poljacik (Fight Choreographer) currently teaches stage combat at The Second City Training Center in Chicago and is a Research Assistant at the University of Chicago in the field of Cognitive/Behavioral Neuroscience. Greg also has been a guest lecturer at Columbia University Chicago and has taught at Regional workshops across the country, including co-coordinating the Winder Wonderland Workshop, the largest stage combat conference in the US. Greg is a certified teacher with the United Stuntmen’s Association, a member of SAG/AFTRA, the Society of American Fight Directors, AGMA, LBP stunts Chicago and Asylum Stunts. Greg is also the inventor of the secret recipe for Gravity & Momentum’s stage blood products.

Gabi Mulder (Assistant Set Designer) is a second-year in the College. She has previously worked on Sleuth as assistant stage manger and The Clean House as assistant set designer. She is very excited to be working on her first Dean's Men show.

Sophie Downes (Assistant Production Manager) is a second-year in the College majoring in English. She was the assistant production manager for last year's As You Like It and Fool for Love, and the production/stage manager for Apsara's spring UT collaboration.

Michael Procassini (Assistant Scenic Designer) is a 3rd year Biology Major. In the past, he has worked as the sensory designer for Hotel Nepenthe and as an assistant costume designer for Hedda Gabler. He has also acted in several things around campus, including CES's production of Tis Pity She's a Whore and UT's production of The Drowsy Chaperone.

Charlotte Rieder (Assistant Director) is a first-year and intends to major in Math.

Brandon McCallister (Assistant Stage Manager) is a first-year majoring in Biology. This is Brandon's first show  with The Dean's Men and University Theater. He was an active member of theater in high school both onstage and backstage.

Daniel Heins (Board Programmer) is a first-year studying Geophysical Sciences. He led his high school lighting and set crews and worked in various capacities for numerous shows among a handful of school and youth theater groups.  Previously he worked in UT as Master Electrician for Closer and will be working as a carpenter for Macbeth.