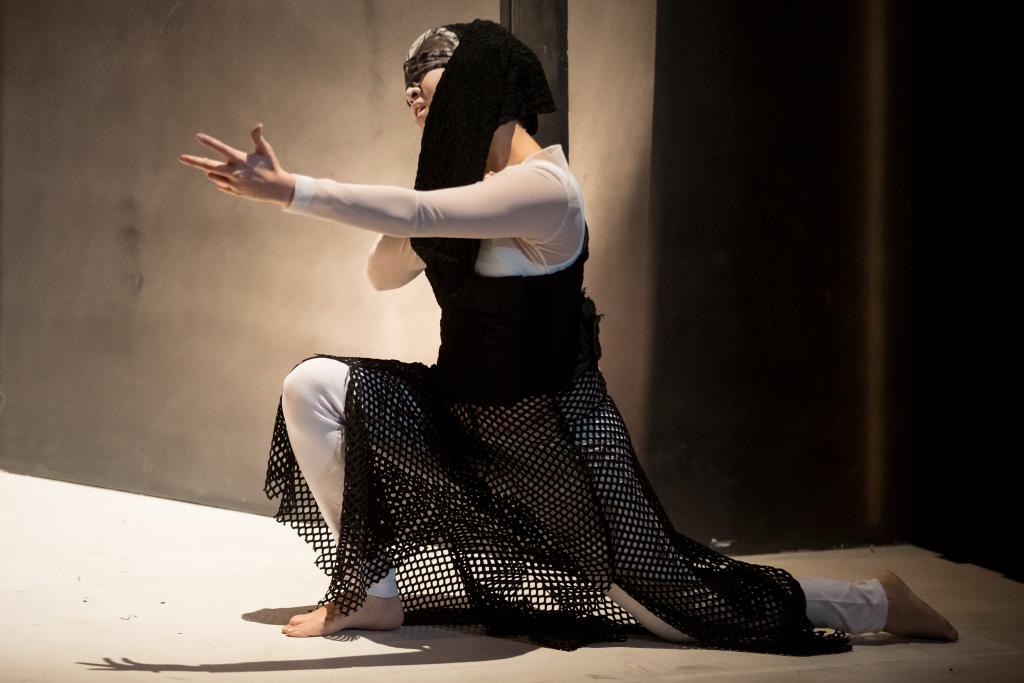 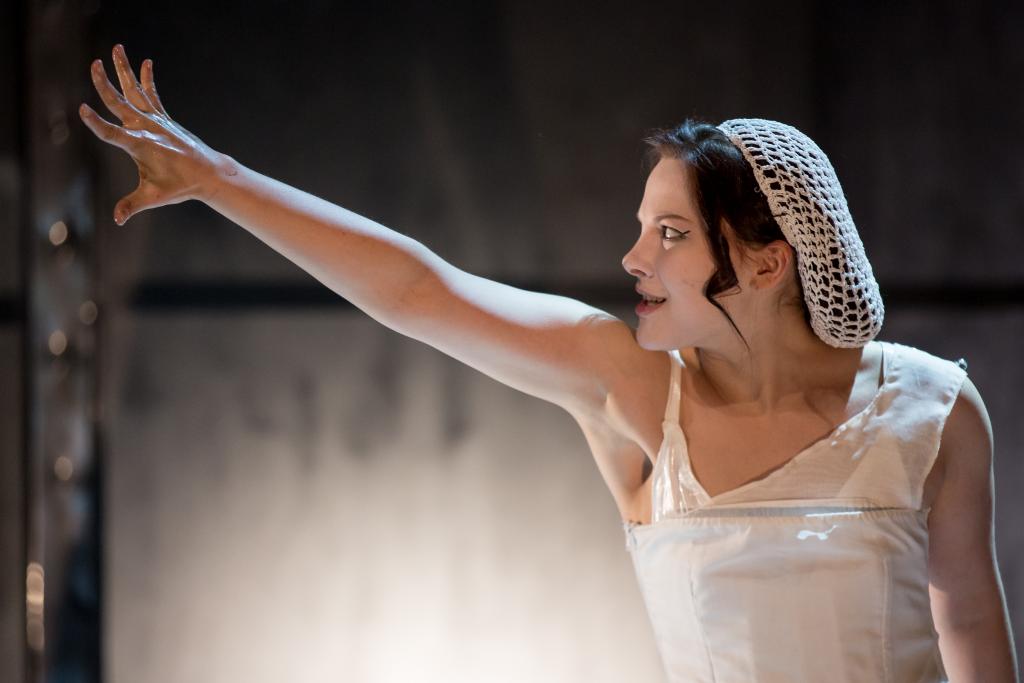 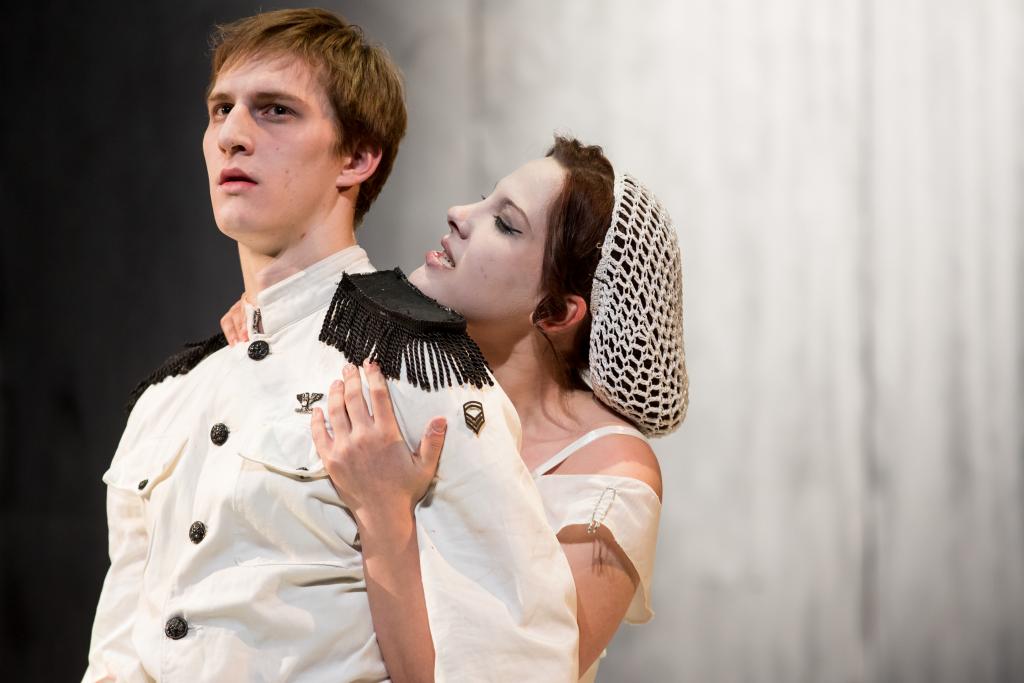 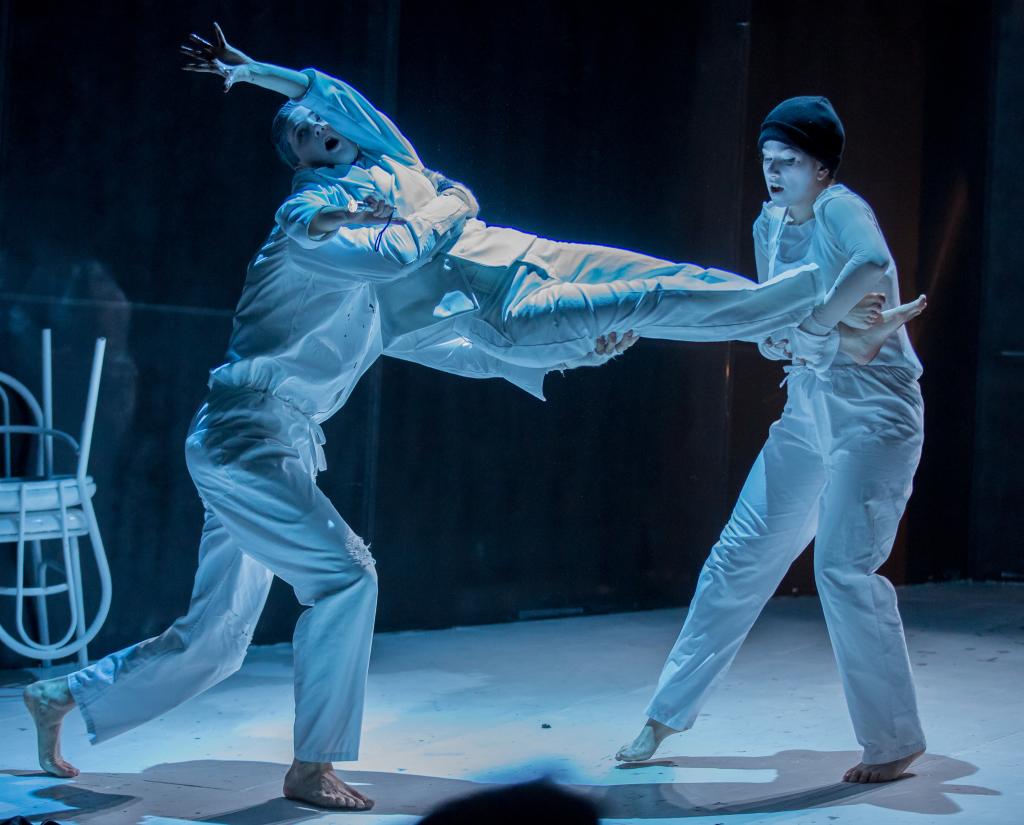 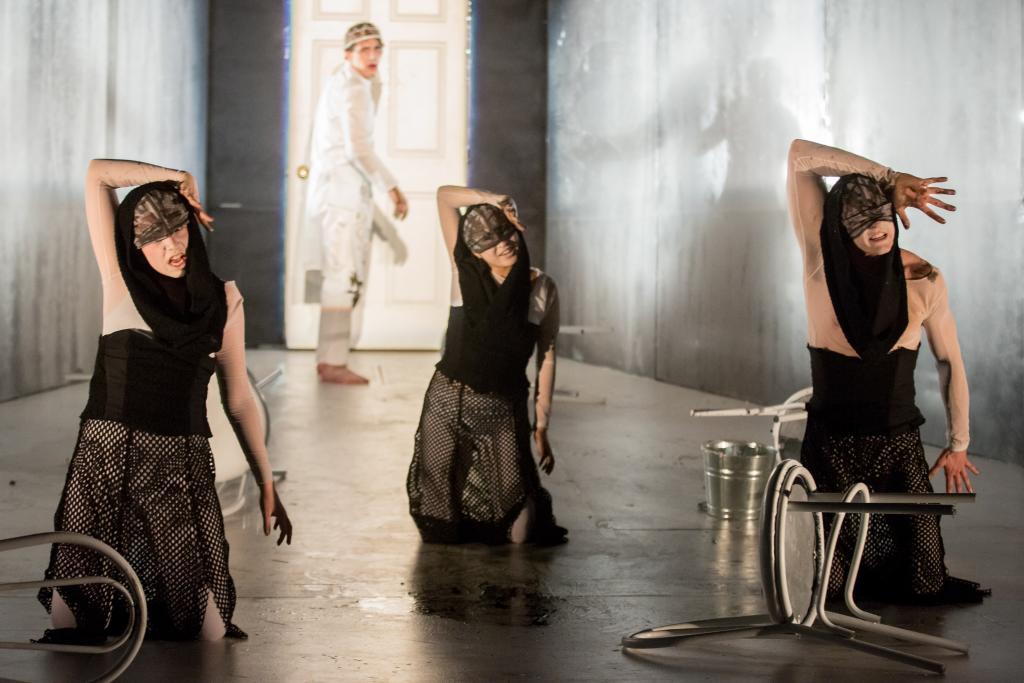 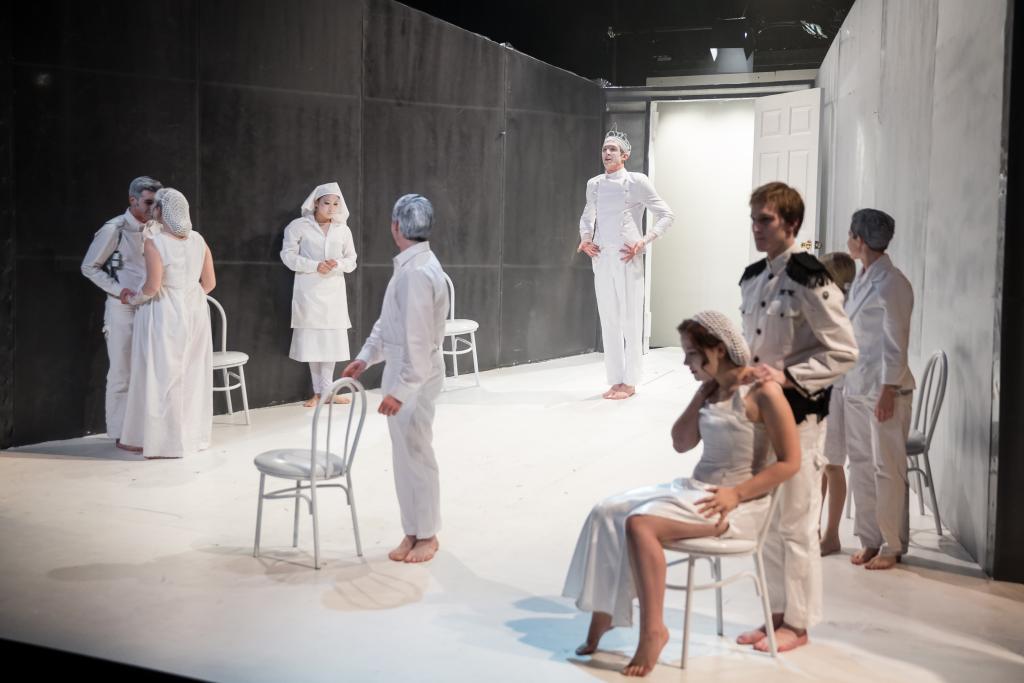 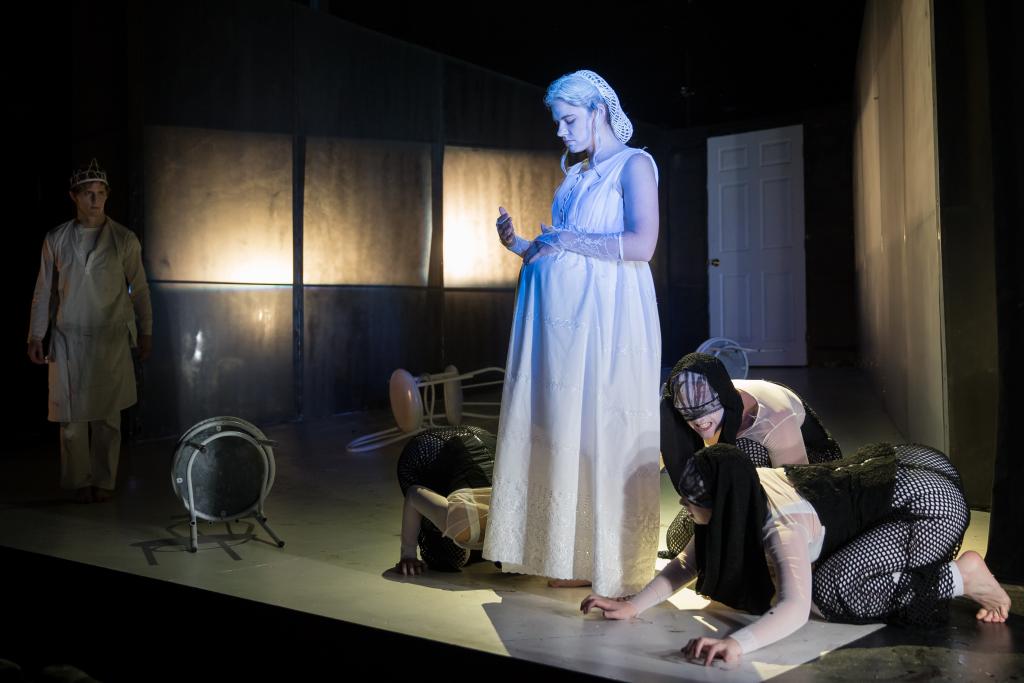 Dreams can contaminate the day and in Éamon Boylan's Macbeth, the wilds outside are something of a dream. Driven mad by the normative imperatives of a waking world, Macbeth and Lady Macbeth want self-fulfillment and happiness at any cost. Weird words affirm their ambition, and they decide to kill the normativity opressing them. A brutal mixture of Shakespearean verse and German Expressionist gesture and movement, Macbeth will murder sleep. Maybe yours.

Jeremy Rodriquez (Macbeth) is a third-year in the College pursuing a major in Economics and a minor in Cinema and Media Studies.

Grace Bolander (Lady Macbeth) is a first-year in the College. She has previously performed with Columbus School for Girls and The Actors' Theatre of Columbus. Some of her favorite roles include Elizabeth Proctor in The Crucible, Juliet in Romeo and Juliet, and Hamlet in Hamlet. Grace plans to major in Theater and Performance Studies.

Matt Riggle (The Child) is delighted to be performing in his first production.  Matt is a third grader at the Lab School where he enjoys math, science, gym, and after school circus performance and sports classes.  Matt lives in the Max Palevsky dormitory on campus with his brother George and his parents, Jason and Suzanne.

Laurie Beckoff (First Witch/Handmaiden/Murderer 1) is a third-year English major, likely with a concentration in dramatic literature and a BA on fantasy.  Her previous UT credits include The Doctor and Ariel in The Tempest (Ariel), The Twelve Dancing Princesses (Princess #8), The Drowsy Chaperone (choreographer), As You Like It (Phebe), and Cabaret (Helga).  Her sixteen years of dance training include tap, ballet, jazz, musical theatre, modern, lyrical, and contemporary, and she is a dancer and choreographer for the Rhythmic Bodies in Motion Performance Company.  She will be spending the rest of the academic year studying abroad at Worcester College, University of Oxford.

Justin Thomas Paul Pasquale Krivda (Witch/Duncan/Porter/Murderer): As a youth in Birmingham, Michigan, Justin trained in the Way of Isshin-ryū karate under Detroit's Grand Master Willie Adams and discovered a love of theatre as a member of John W. Rutherford's Groves Performing Arts Company. The Warrior-Poet moved to the South Side in 2010 to study English, Physics, and Astrophysics at UChicago, and in his time here has acted in ten University Theater productions--most recently performing alongside Jackson Ruzzo in Tony Shaffers' Sleuth.

Sarah Lo (Witch/Nurse/Doctor) is a fourth-year in the college majoring in Theater and Performance Studies and East Asian Languages and Civilizations. Sarah has performed in Barely There, a fall 2013 UT Workshop, in M. Butterfly with the Court Theatre, and in Before the Window, a devised piece directed by Eamon Boylan. Sarah choreographed for Cabaret in Spring 2014 and is the co-director of UChicago Maya, a fusion dance team.

Emma Maltby (Lady Macduff) is a first-year in the college, and is currently a Pre-Med TAPS major.  Previously she has trained at and worked with the Horace Mann Theatre Company, the Utah Shakespearean Festival, and the Stella Adler Studio of Acting.

Tessa Garcia-Duarte (Banquo) is a first-year. In the past Tessa has performed and stage managed with The Seattle Shakespeare Company, Seattle Academy’s theater program, and Seattle Public Theater. This past year she was a on the board of the Young Americans’ Theatre Company and directed Night Swim for their summer season.

Zachary Bamford (Macduff) is a first-year English major. In the past Zachary has acted with the Eagle Hill Players as well as at Phillips Academy Andover, and has directed shorts with the New York Film Academy. His last role was Antipholus of Syracuse in A Comedy of Errors.

Tommy Carden (Malcom) is a first-year in the College. This is Tom’s first UT production. While undecided on a major, he is considering but not limiting himself to public policy, political science, and economics.

Éamon Boylan (Director) is a TAPS major who has previously directed Before the Window, Grey Gardens, The Glass Menagerie, This Property is Condemned, and A Monologue from the Taming of the Shrew. Outside of University Theater he has assisted Joanie Schultz, Audrey Francis, Alex Lavelle, Evan Garrett, William Glick, and will be working in association with Scarlett Kim this winter on a project for Rhinofest. Also with University Theater he has performed, written, and designed for mainstage productions as well as co-curating the quarterly Theater[24] festival. He has proudly worked for both Logan and TAPS, currently serving as Front of House Manager for north campus events.

Daniel Heins (Carpenter) is a first-year potentially studying Geophysical Sciences at the College. He led his high school lighting and set crews and worked in various capacities for numerous shows among a handful of school and youth theater groups.  His previous work with University Theater are as a Master Electrician for Closer and as a board programmer for Henry V.

Marisa Chillberg (Costume Designer) is a fourth year Theater and Performance Studies major in the College. University Theater credits in design include Grey Gardens, The Credeaux Canvas, Henry VI, and Cymbeline in addition to numerous directing and dramaturgy credits. Marisa is thrilled to be working as costume designer for Manual Cinema’s-premiere of Mementos Mori at the MCA this January. She will be pursuing a career in costume design after graduation.

Julia Bodson (Dance Master) is a third-year Statistics major in the College. She has previously choreographed the UT productions of Grey Gardens and Godspell.

Maya Scheidl (Props Designer) is a second-year in the college, hoping to double major in Environmental Studies and Visual Arts. Maya has been a part of several musical theater productions, including Alice in Wonderland and Annie.

Adam Johnson (Dramaturg) is a second-year in the College and a potential Economics major with an English minor. Previously in UT, he has appeared in Grey Gardens and A Little Star Quality, assistant directed on Godspell, and earlier this season directed Talk to Me Like the Rain and Let Me Listen. Adam is also a member of UT Committee.

David Goodman-Edberg (Lighting Designer) is a third-year TAPS major in the college. He has designed lighting for a number of on-campus theater and dance productions. Most recently, he designed for the UT/TAPS production of A Streetcar Named Desire. Outside of the university, David has worked as a freelance electrician at such venues as Chicago Shakespeare Theater, Court Theatre, Marriott Theater Lincolnshire, Museum of Contemporary Art, Athenaeum Theater, Ruth Page Center for Dance, Columbia College Dance Center, and Theater Wit.

Murphy Spence (Technical Director) is a third-year in the College and serves as the assistant technical director for the theater department. Recent University Theater credits include Cabaret (set design), Fool for Love (master carpenter), and As You Like It (lighting design). Professionally, she has worked as a carpenter and scenic artist through Crosstown Scenic on sets for Emerald City Theatre, TimeLine Theatre, Marriott Theatre, Roosevelt University, and LeakyCon, a convention thrown by the Leaky Cauldron website.

Sara Lu (Sound Designer) is a fourth-year majoring in Biology and Music. This is her eleventh show sound designing for University Theater. Past design credits include A Streetcar Named Desire, Much Ado About Nothing, Fool for Love, Hedda Gabler, The Drowsy Chaperone, The Credeaux Canvas, This is Our Youth, and Reefer Madness.

Lauren Eames (Tech Staff Liaison) is a second-year Religious Studies Major.  She has worked on a number of lighting teams within UT/TAPS in both design and electrician roles and performs in U of C Commedia's ensemble as Pantalone.  She is also the Assistant North Campus Theater Manager.

Margaret Lazarovits (Assistant Director) is a first-year potential Physics major. She is very excited to have been able to work on her first UT production in her first year at University of Chicago. Her previous theatre experience includes stage managing, assistant directing for, and acting in her high school's past productions, like The Crucible and Little Shop of Horrors.

Sydney Purdue (Assistant Set/Scenic Designer) is a first-year anticipated Computational and Applied Math major. This is her first University Theater show, and she assisted in designing shows previously for her high school. She is also working as a stagehand for this production.

Christian Nicholas Castro Romero (Assistant Sound Designer) is a first-yeary in the College and a prospective major is History with a potential Music minor and perhaps a Theater minor as well. This is his first show with UT, but in the past he has filled the roles of Stage Assistant, Stage Manager, Light Board Operator, Sound Board Operator, Ensemble member, Director's Assistant, Instrumentalist, Script Writer, Set Construction and Lead Role. These roles were held for Musicals, Plays, Choir Showcases and Competitive One Acts.

Andrew Mao (Assistant Choreographer) is a second-year TAPS major and is ​thrilled to take part in his first choreographic role in a UT performance. He has choreographed and performed for Le Vorris & Vox Circus productions such as The Sandman's Wake (The Sandman) and Oz (The Huntsman). He has also performed for CES productions such as Iron Bridal Feast (Agamemnon) and The Clouds (The Clouds). He is tremendously excited to direct I, Iago, an upcoming workshop in the 2015 quarter adapted from William Shakespeare's Othello.

Samantha Perkins (Assistant Costume Designer) is a first year potentially double majoring in Art History and English. This is her first show at University Theater and assassinating with costuming. Past experiences include acting in high school productions, such as Trouble with Angles. She is excited to continue working and assisting with costume for the winter's production of Amadeus.