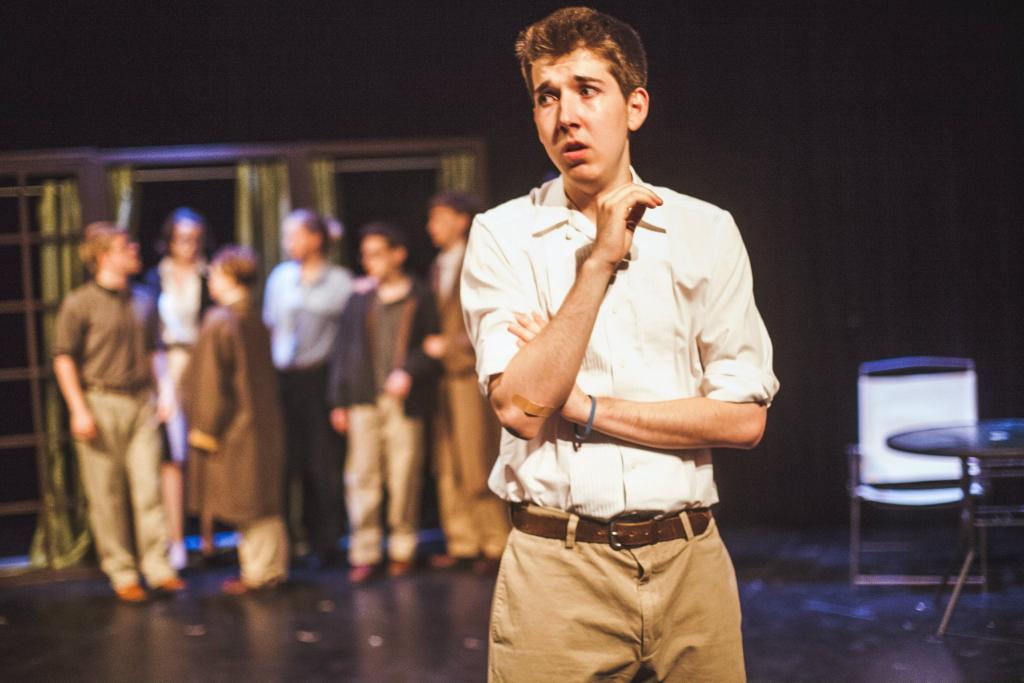 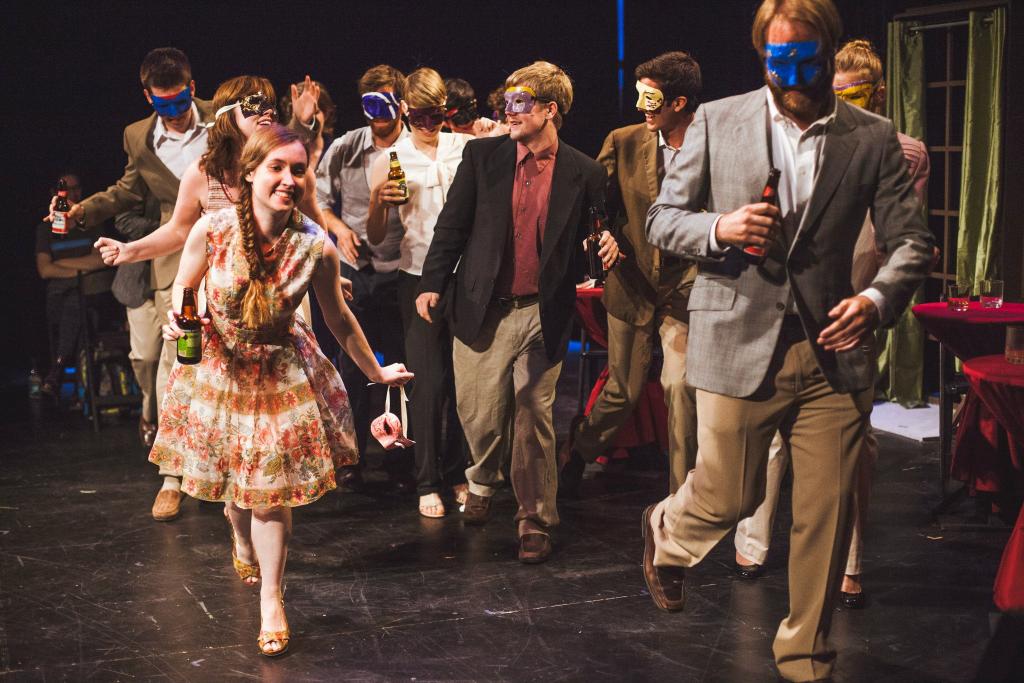 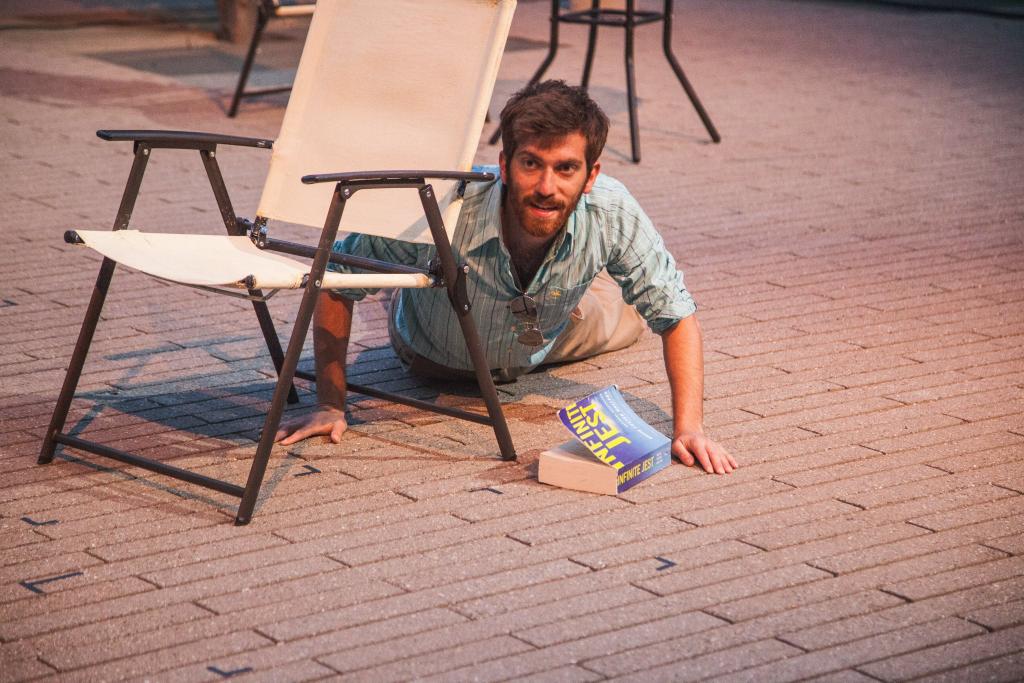 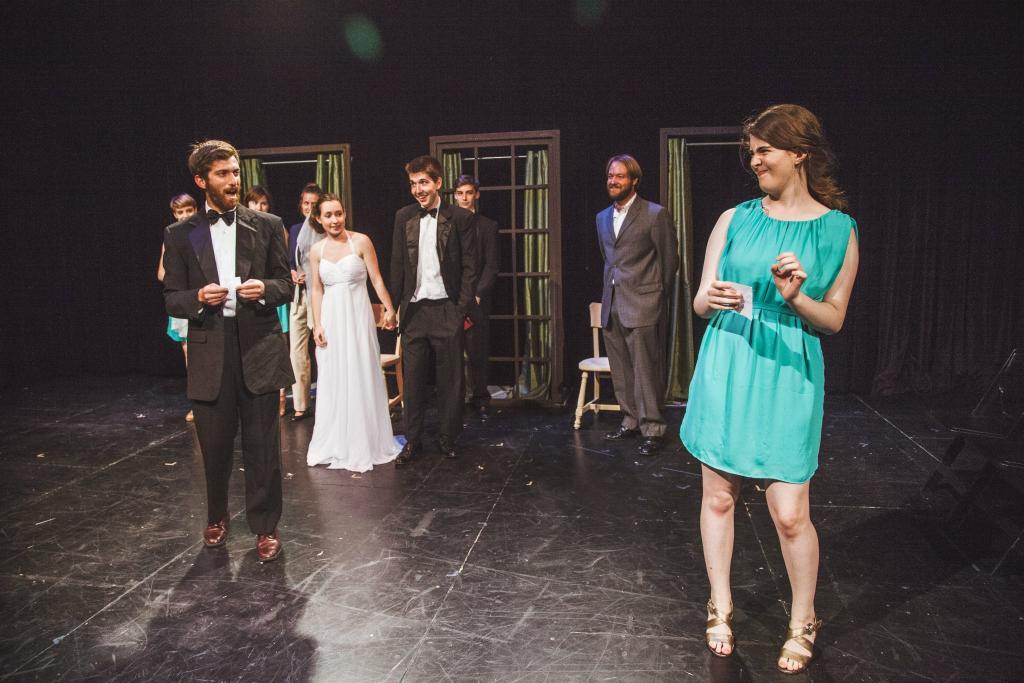 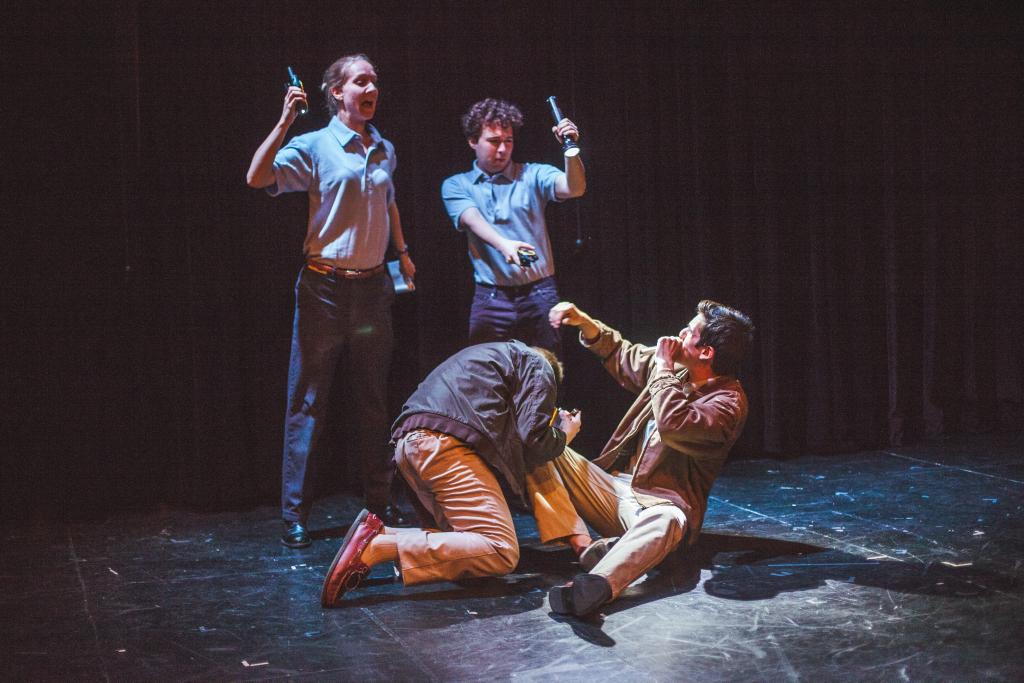 With the return of spring comes the return of the Dean's Men annual outdoor courtyard show. Fourth year Tess Drummond directs this season's Much Ado About Nothing which features trickery, misinformation, and interfering friends, all for the sake of romance. Two pairs of lovers are looking for love: Benedick and Beatrice, whose sparring wits keep you on your toes, and Claudio and Hero, whose genuine feelings are sweetly endearing. Springtime joy and camaraderie are guaranteed, and the ticket is as free as sunshine.

Michaela Voit (Beatrice) is a first-year English major in the College. This is her third Dean’s Men show thus far, having previously appeared as Celia in As You Like It and Helena in A Midsummer Night's Dream. To the Dean's Men, she sends many thanks for an unforgettable first year.

Rob Geada (Claudio) is a first-year and this is his first production at the University.

Elise Wander (Hero) is a third-year English and Gender/Sexuality Studies major. She has previously appeared in The Clean House (Ana), The Glass Menagerie (Laura) and Cymbeline (Pisanio), and has co-directed The Vagina Monologues.

Clair Fuller (Donna Joan) is a second-year in the College majoring in Gender & Sexuality Studies and English. She has previously appeared in No Exit (Estelle) as part of Winter 2014's Weekend of Workshops, The Vagina Monologues (V-Squad), and Theater[24]. This is her first production with the Dean's Men.

Michael Reinhard (Leonato) is a fourth-year in the College. He has enjoyed participating in UT, Doc Films, Commedia dell'Arte, and Memoryhouse during his time on campus. As he prepares to graduate, he wishes the best to everyone on their diverging life paths. Much love.

Atticus Ballesteros a first-year at the College. Last quarter he played Charles in Sasha Ayvazov's production of The Clean House, and the quarter before he played Duke Frederick in Gwen Wiegold's production of As You Like It. He also played the Super Ego this quarter in Zev Hurwich's BA production titled Three Exit Interviews Conducted in Rudy's Psyche Preceding the Event of his Death.

Jonathan Sorce (Conrade) is a first-year in the College, and a third-quarter Dean's Man, having previously appeared in As You Like It (Corin) and assistant directed A Midsummer Night's Dream.

Lauren Eames (Dogberry) is a first-year Religious Studies major. She has been deeply involved in lighting design with UT/TAPS for the past year and plays Pantalone with Attori Senza Paura. She would like it to be remembered that she is an ass.

Gwendolyn Wiegold (Ursula) is a second-year TAPS major. Previous UT credits include last quarter's A Midsummer Night's Dream (Bottom), as well as The Two Gentlemen of Verona (Lucetta) and First Love (Edith). She has also assistant stage managed and was the director of the Fall 2013 Dean's Men show, As You Like It. Many thanks to everyone who made this production possible.

Maggie Cornelius (Watch 1) is a second-year Philosophy major who is so grateful for the opportunity to be a member of The Watch in Much Ado About Nothing. This is her first TAPS production, as well as her first on-stage experience since singing The Well's Fargo Wagon in sixth grade. Taking a Shakespeare class from Prof. David Bevington inspired her to audition for this play, and she'd like to thank The Dean's Men for helping her pursue this interest.

Marc Kealhofer (Costume Designer) has been performing in, directing and designing for shows since his first ballet performance at age four. He was previously an assistant costume designer in the Dean's Men production of Henry VI.

Kevin Freese (Lighting Designer) is a second-year Computer Science and Math major in the College. He has previously designed lights for last quarter's Midsummer Night's Dream as well as The Vagina Monologues (2013). He has also been Master Electrician on many UT productions.

Sara Lu (Sound Designer) is a third year majoring in Biology and Music. She has been sound designing for University Theater since her first year. She has worked on The Homecoming, Reefer Madness, An Actor Prepares, This is Our Youth, The Credeaux Canvas, The Drowsy Chaperone, Hedda Gabler, and Fool for Love.

Isabel Sen (Props Designer) is a fourth-year in the College majoring in Public Policy Studies, and is excited to call Much Ado her final show! In her time with University Theater, she has served many roles, notably including Stage Manager (Reefer Madness; asst., Much Ado '11), Dramaturg (The Violet Hour, The Glass Menagerie), Production Manager (asst., Grey Gardens), Props Designer (The Lion in Winter), and curator of the quarterly Theater[24] play festival. She'd like to thank everyone who made these four years a great run, and you for coming to see the show tonight!

Benjamin Heller (Production Manager) is a fourth-year Political Science major. Previously he has production managed Twelfth Night (Winter '12), The River Jordan (Spring '12), The Credeaux Canvas (Winter '13), Hello Out There and First Love (Spring '13), Hedda Gabler (Fall '13), and Godspell (Winter '14). This quarter, in addition to production managing Much Ado About Nothing, he is the dramaturg for Cabaret.

Itzel Blancas (Asst. Director) is a first-year English major in the College. She has previously participated in Hedda Gabler and Godspell as the Assistant Costume Designer and has written and designed for Theater[24].

Mariel Shlomchik (Assistant Stage Manager) is a first-year Biology major. She has assistant stage managed As You Like It and assistant directed The Clean House. This is neither the first nor the last play she will be helping manage or direct, and she is excited to continue her participation in University Theater!

Andrew MacKie-Mason (Master Electrician) is a fourth-year Math and Philosophy major. This is his tenth and final University Theater production.

Hex Bouderdaben (Assistant Costume Designer) is a first-year undergraduate, new to the theater world. Hails from Houston, TX and is generally excited about Life.

This is Arielle von Hippel's (Assistant Costume Designer) first official Assistant Costume position, having previously though unofficially worked on costumes for A Midsummer Night's Dream, Hamletmachine, The Lion in Winter, As You Like It, and others. She is also Assistant Costuming Apsara: Indian Women Through the Ages and will be acting in Cabaret 10th week.

Cynthia Campos Costanzo (Asst. Costume Designer) is a second-year at the College. She is a double major in both Biology and TAPS. Her past experience in theater at UChicago include playing a Bird Goddess in Theater[24] (Winter '14: The Noble Poacher) and being an assistant puppeteer for Myra Su's BA project (Spring '13: Binky Brown Meets the Holy Virgin Mary). Her recent projects included working as an Assistant Costumer for the Dean's Men production of Much Ado About Nothing, and assisting with puppets for the CES show Iron Bridal Feast.

Ariela Subar (Assistant Sound Designer) is a first-year student in the college. She has previously worked on Hedda Gabler (Assistant Lighting Designer), croMagnum (Assistant Stage Manager), and Godspell (Crew). She was also the Stage Manager for A Little Star Quality, part of Weekend of Workshops, earlier this quarter.

Michael Santini (Asst. Sound Designer) is a third-year in the College studying Anthropology. This is the first production that he has been part of and he hopes that he may continue to be a part of the wonderful community that is University Theater. While having not done anything for University Theater before, he has frequently worked in the Performance Hall at the Logan Center for the Arts doing some minor sound, light, and stage managing work for various on campus events.

Caroline Veniero (Asst. Production Manager) is a first-year History major in the college. This is her first UT production.

Savannah Smith (Asst. Production Manager) is a first-year Classical Studies major in the college. Much Ado About Nothing is her second show as an Assistant Production Manager, the first being the Winter 2014 production of Godspell.

Riley Kreger (Tech Staff Liaison) has worked in a wide variety of roles on many productions, but for the most part focuses on scenic design. His designed and built (with much help) the sets for Reefer Madness: The Musical, The Glass Menagerie, Grey Gardens, and Fool For Love.