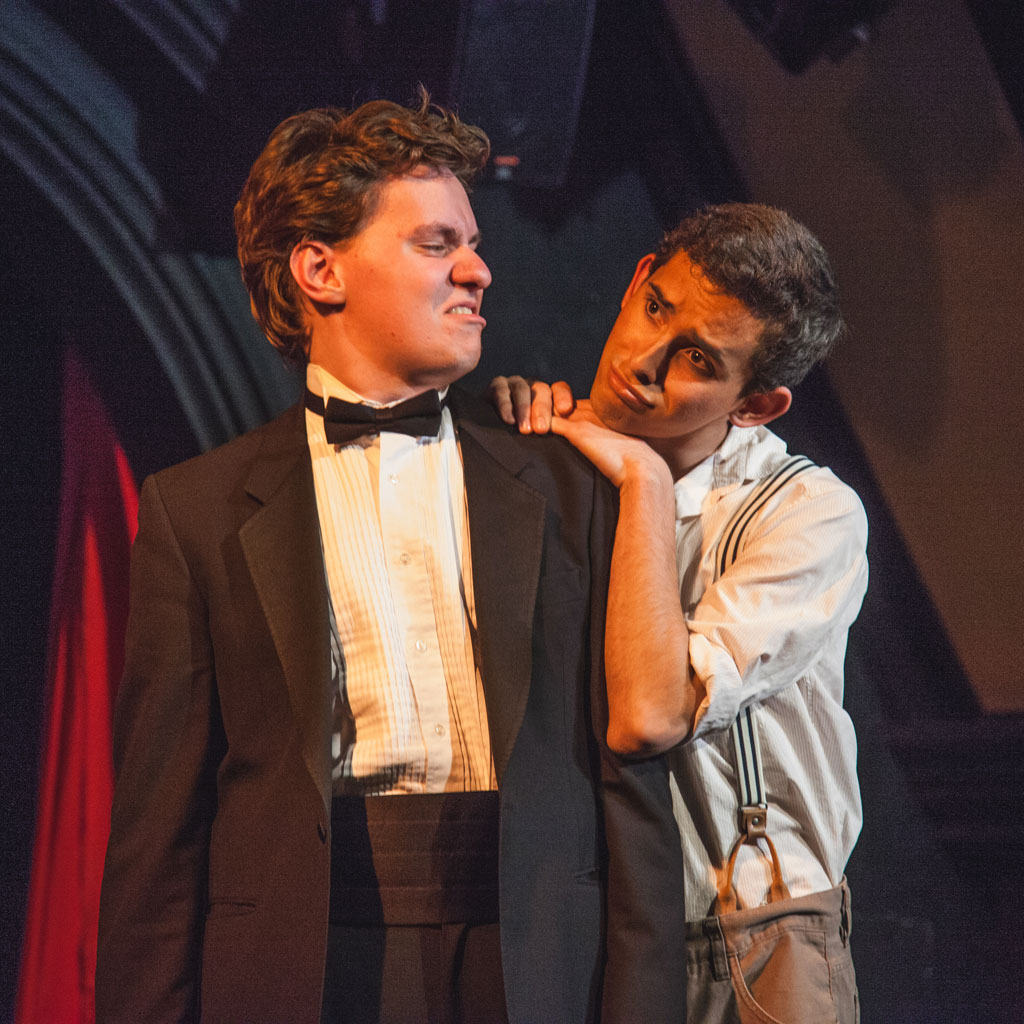 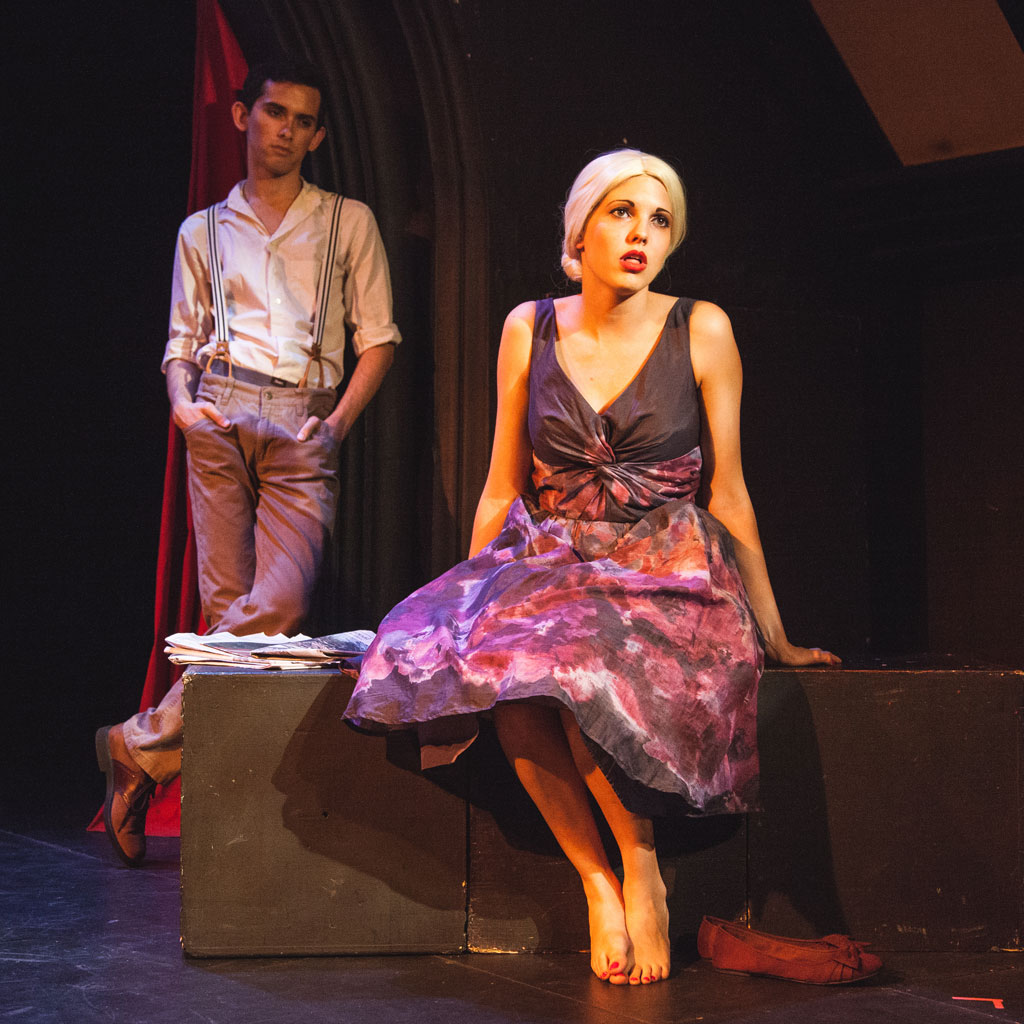 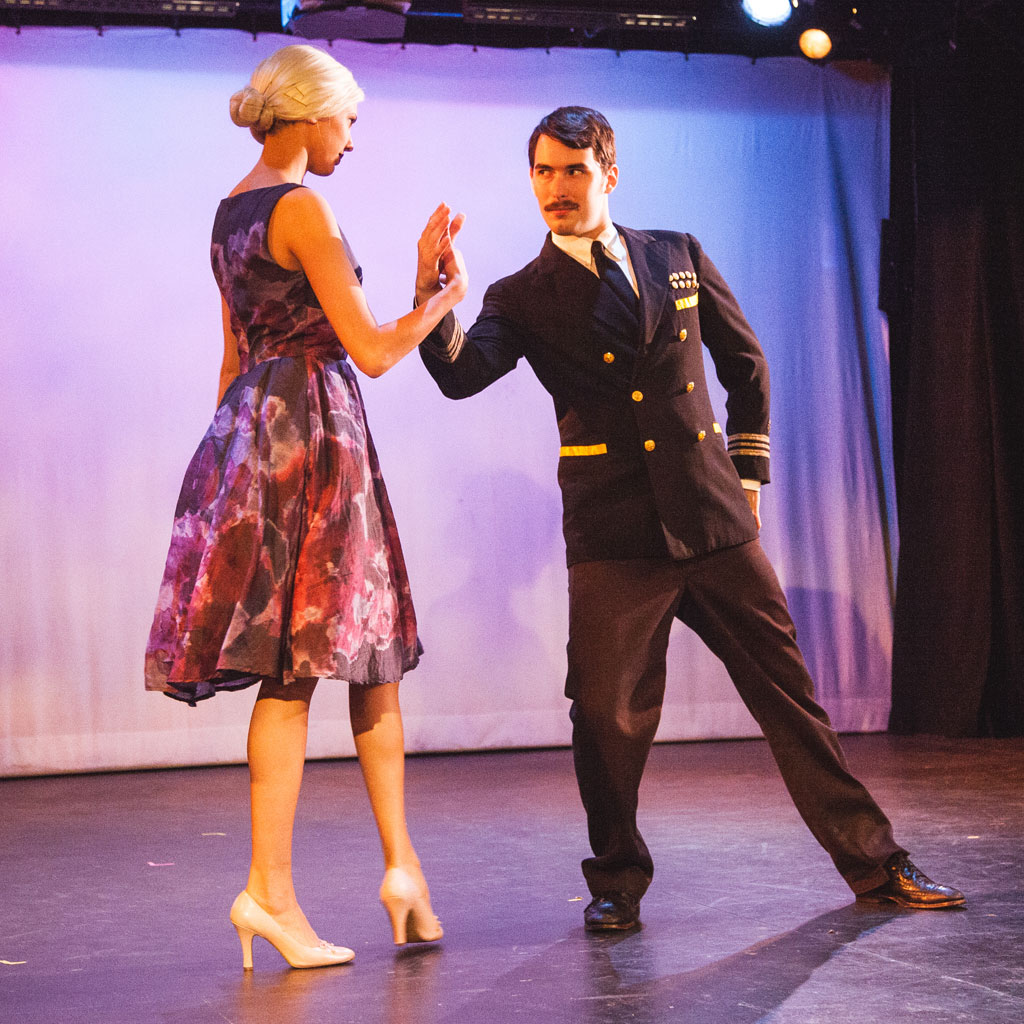 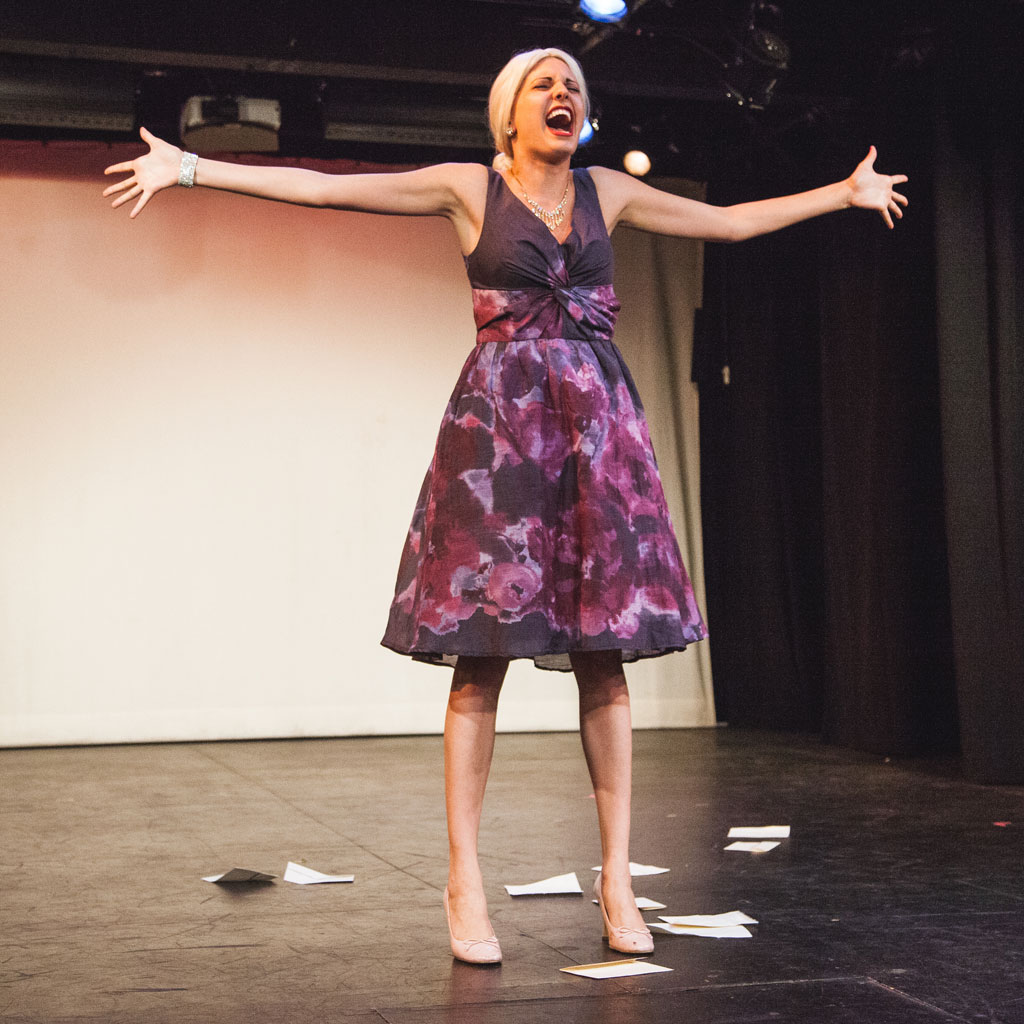 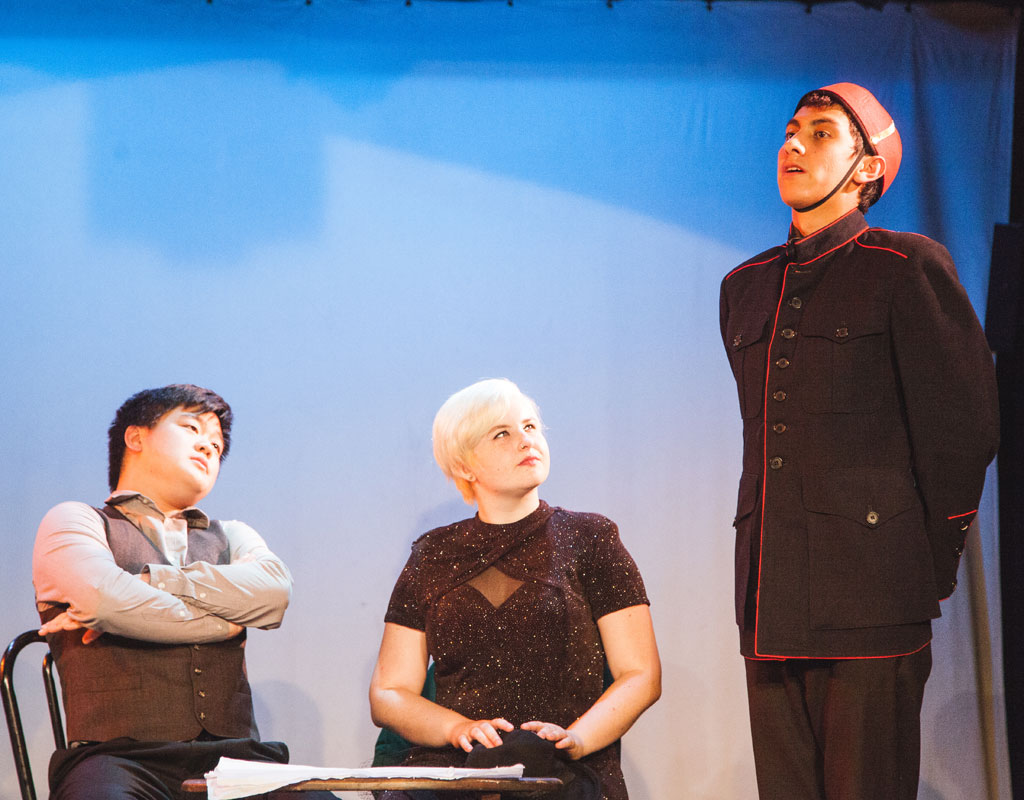 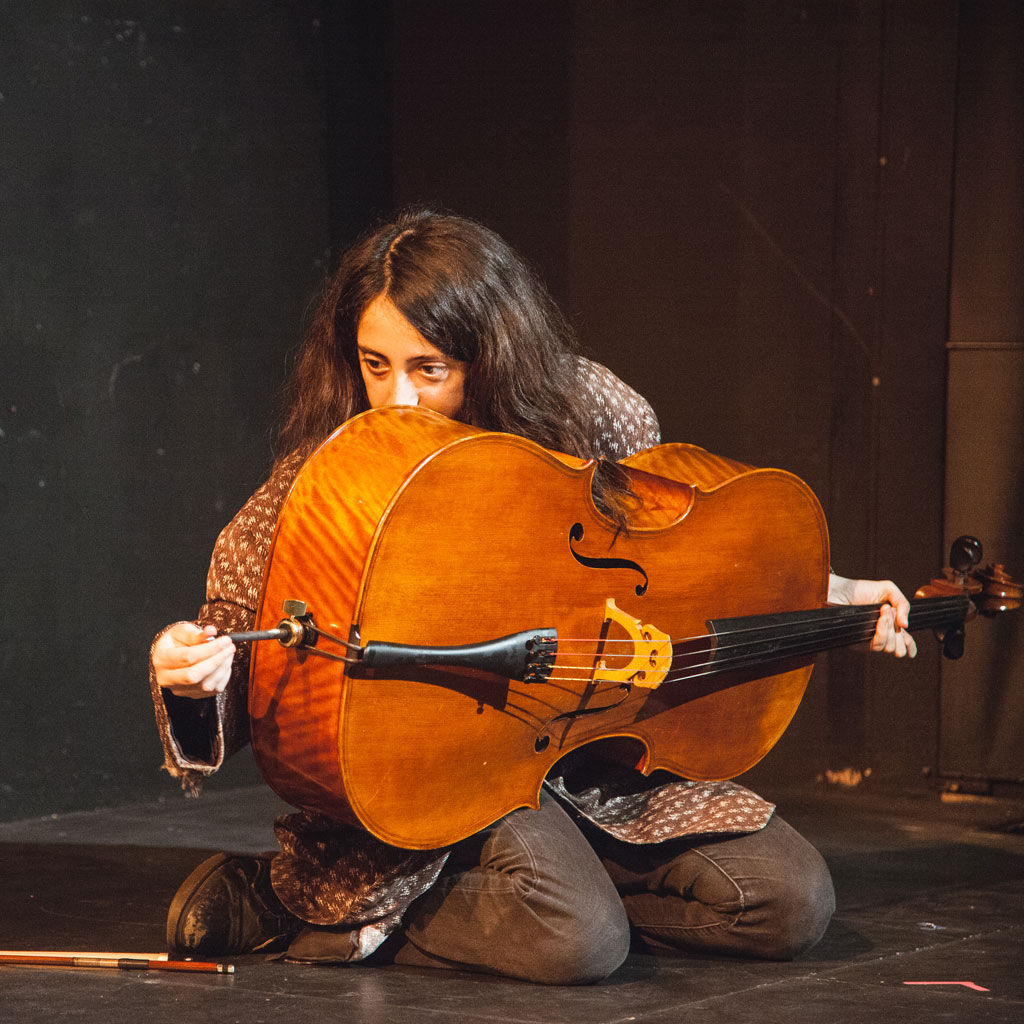 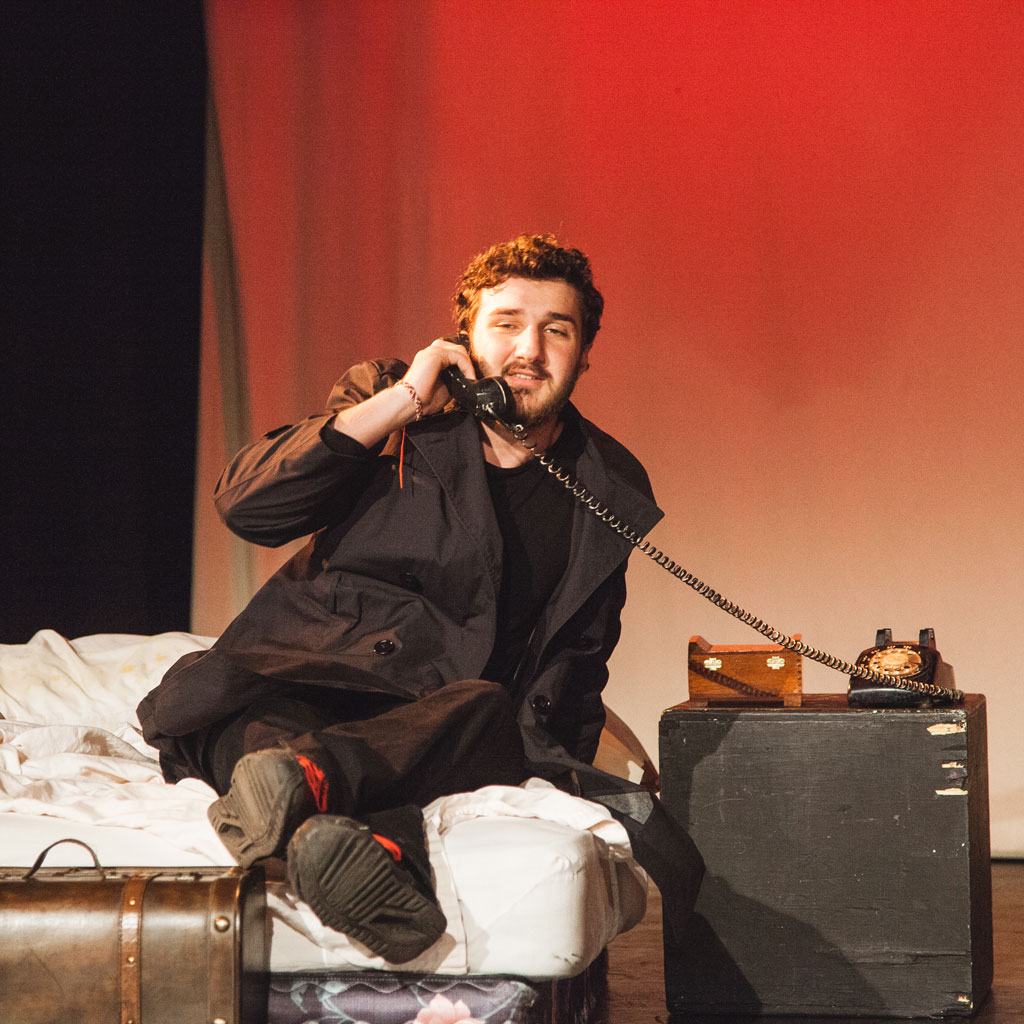 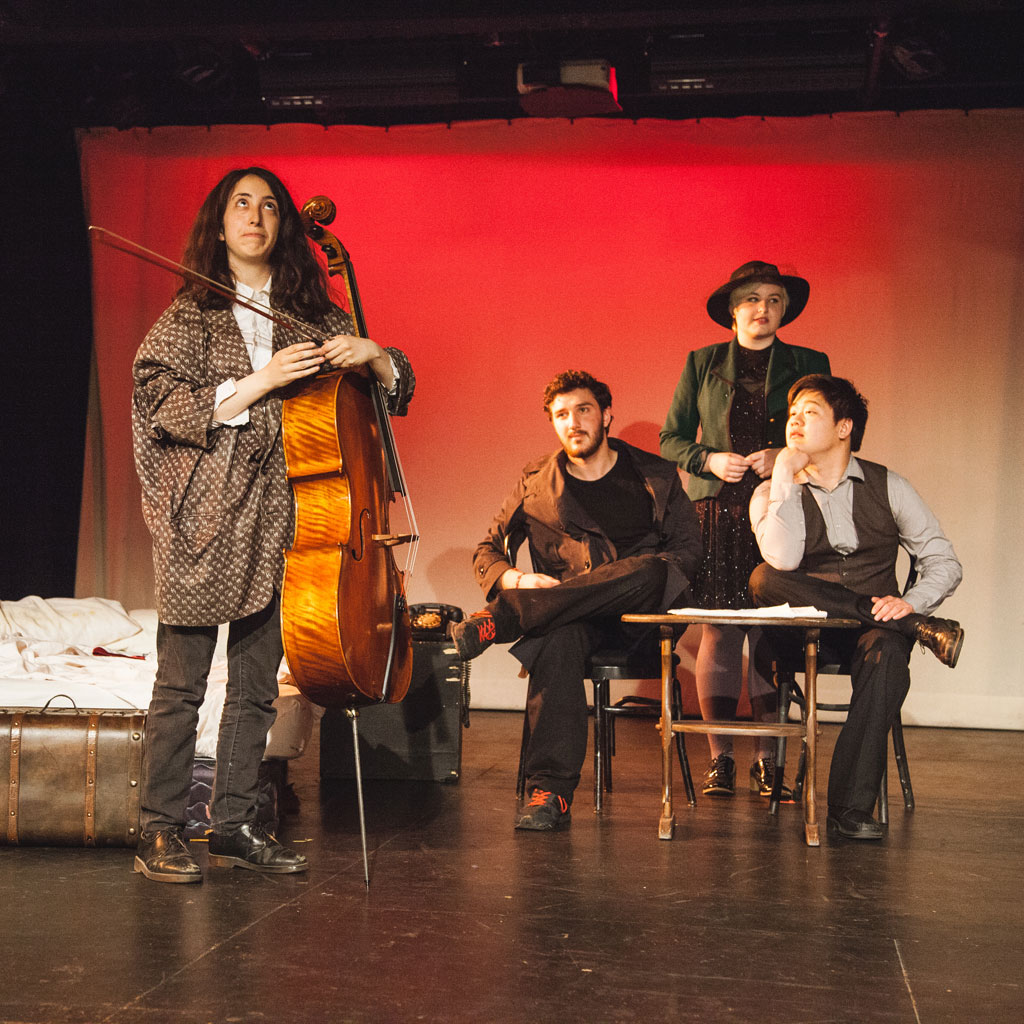 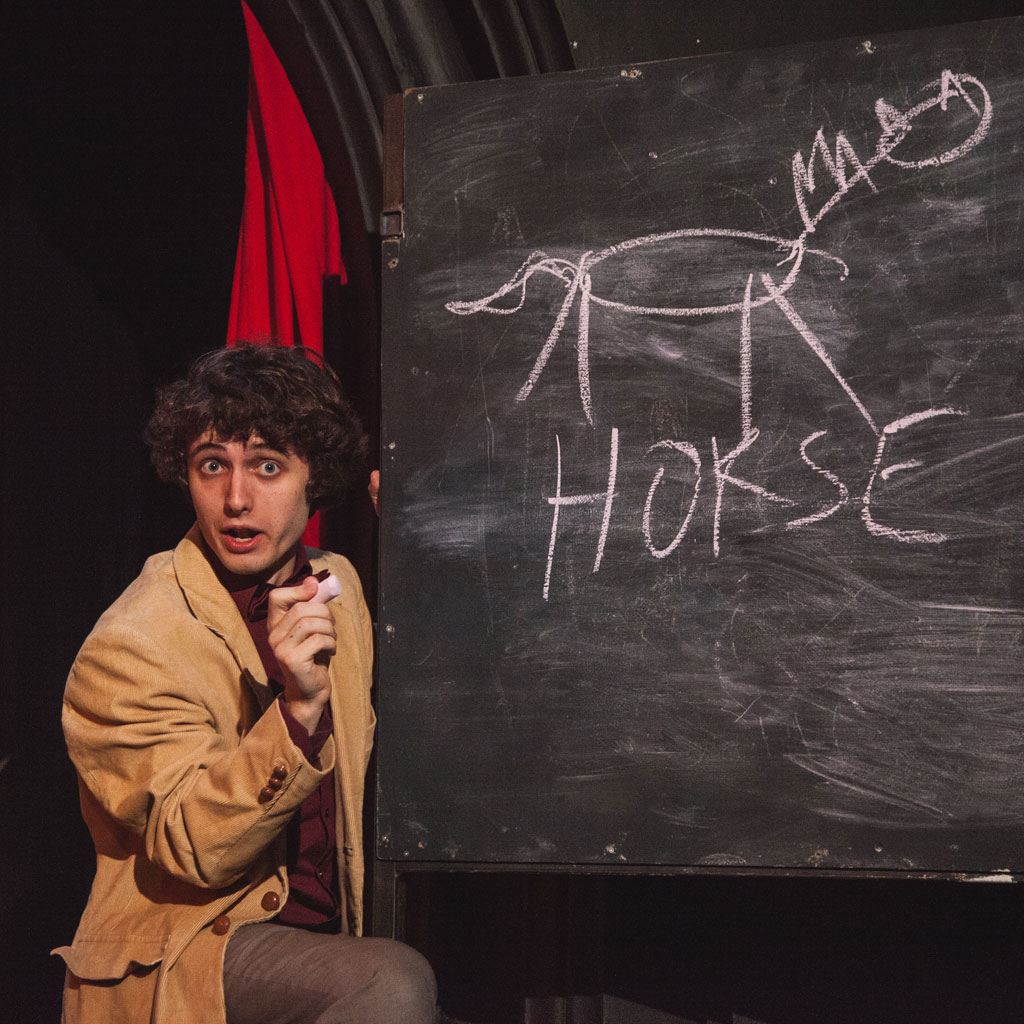 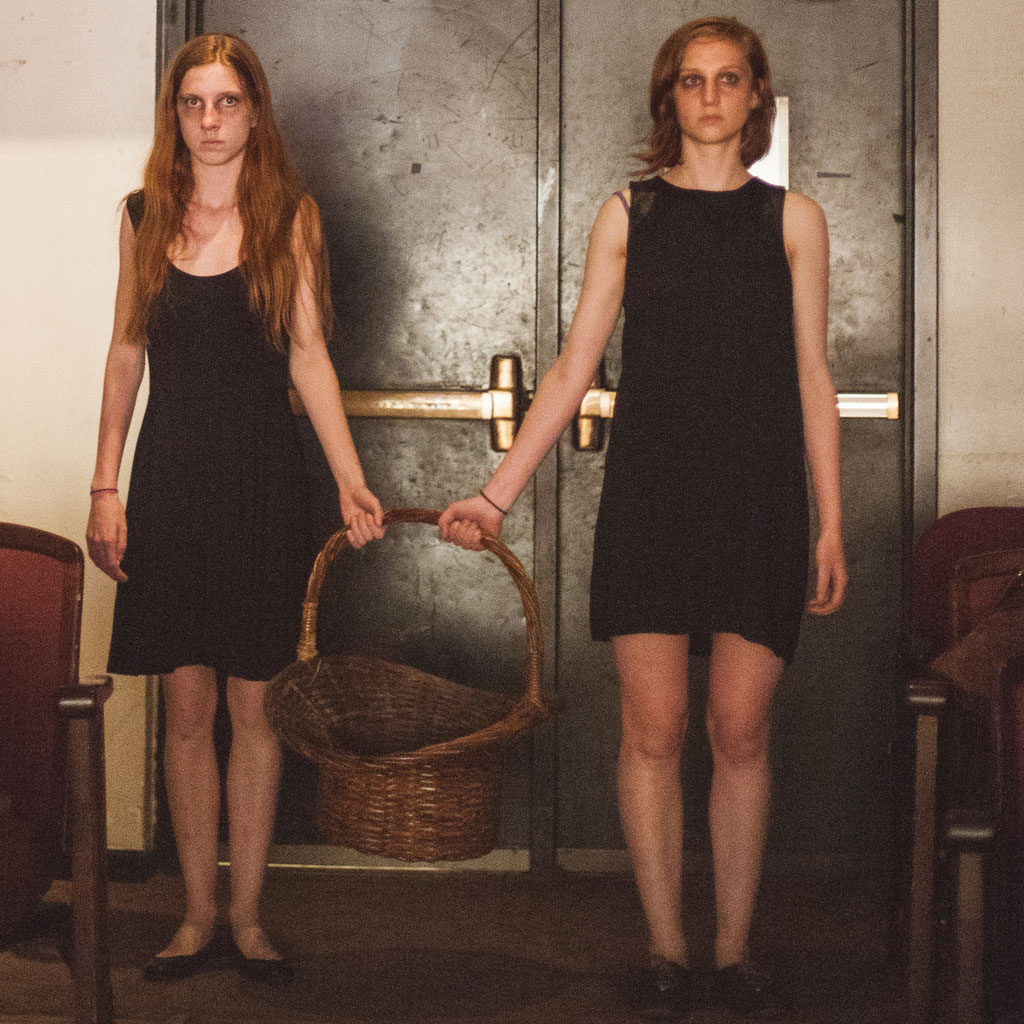 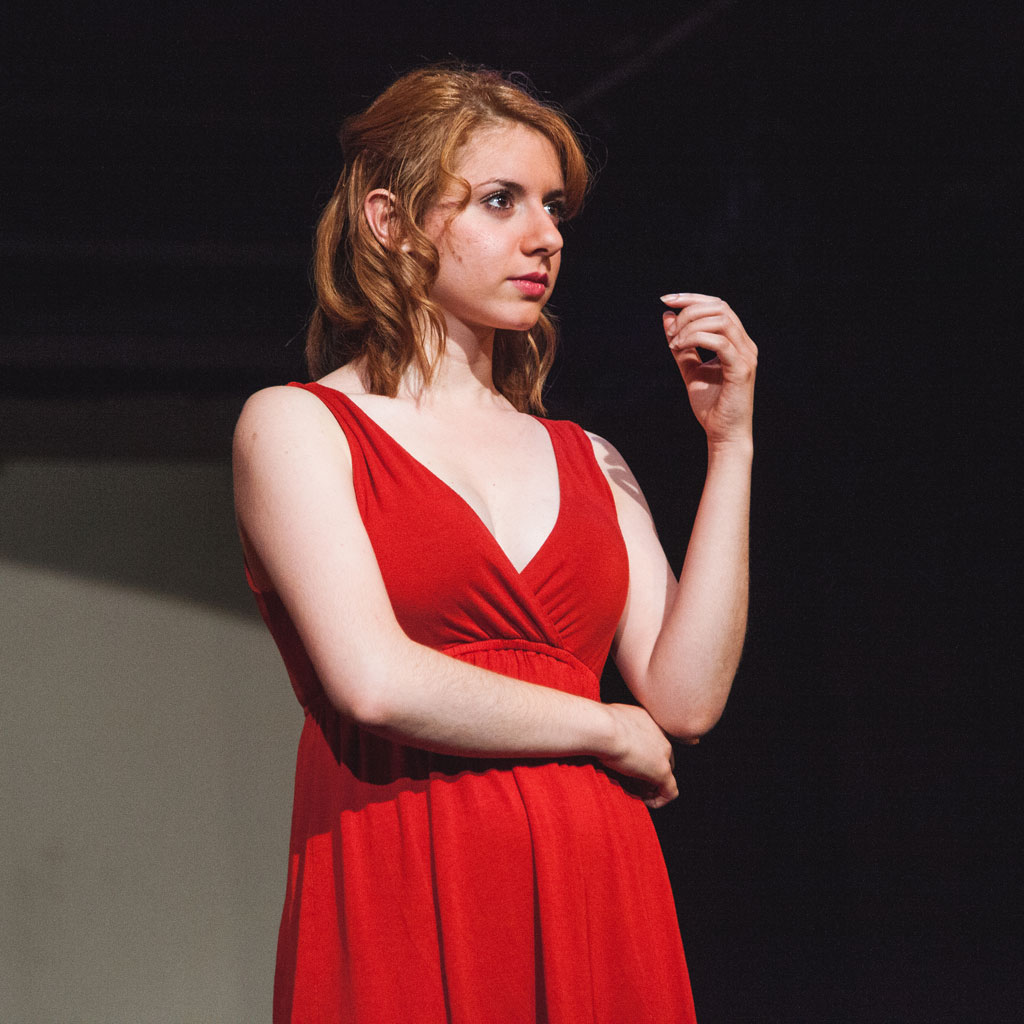 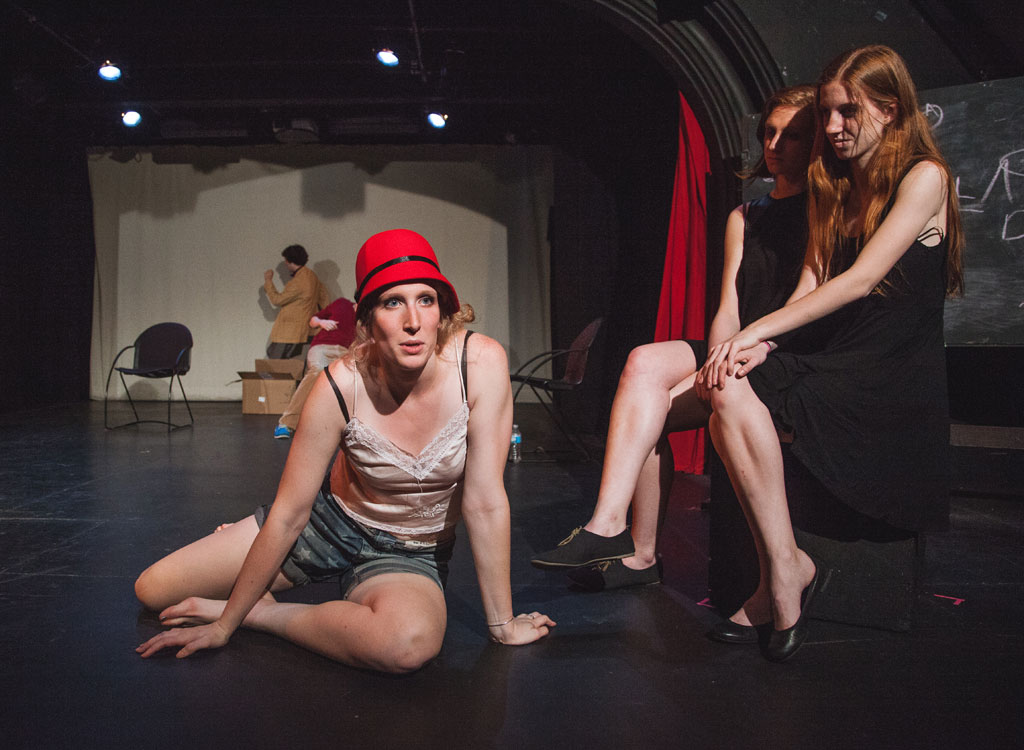 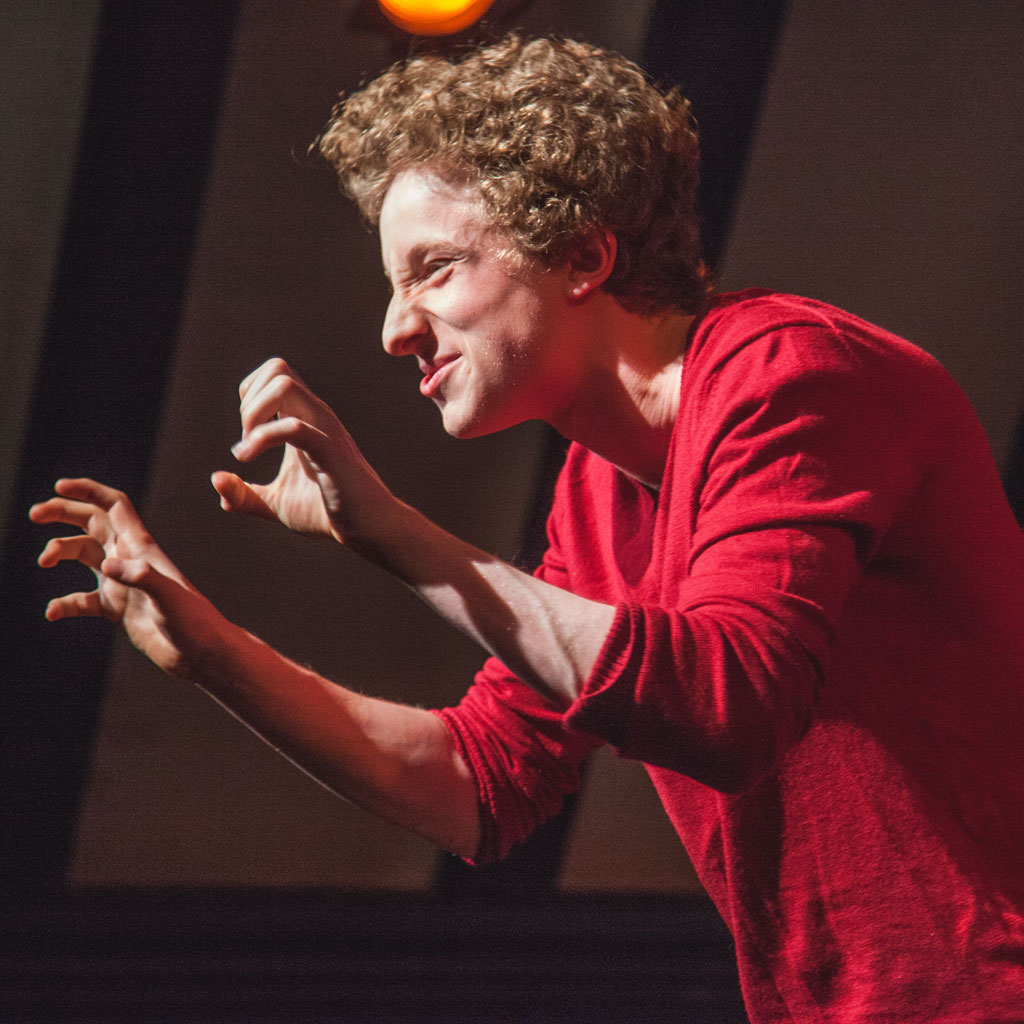 Every quarter, A Weekend of Workshops allows directors to devise and stage big ideas on a small scale. This spring, truth, or a lack thereof, is a matter of perspective. Victorian era British gentility learns that its house may be on fire, literally. Poetry, sound, and movement create the dissonance that may or may not be human nature. And the first lady of Argentina may sing a different song than we expect. Alex Hearn directs The Still Alarm by George Kaufman, Derek Spencer stages Harmony Korine's A Crackup at the Race Riots, and Allie Garfinkle presents A Little Star Quality: Scenes from Evita.

by Harmony Korine
adapted and directed by Derek Spencer

Ellen Platts (Eva Perón) is a third-year Anthropology major concentrating in archaeology and physical anthropology. This is her first University Theater production and she could not be more thrilled to be portraying one her favorite roles.

Eric Kirkes (Che) is currently a first-year in the College. He plans on pursuing a double major in Theater and Performance Studies and Psychology. Past productions with University Theater include Godspell. Other productions he has been a part of include A Midsummer Night's Dream, Les Miserables, Aida, The Importance of Earnest, and Thoroughly Modern Millie.

Adam Johnson (Agustin Magaldi) is a first-year undecided major. He has previously appeared in Grey Gardens (Major Bouvier), worked as the assistant director for Godspell, and serves on UT Committee.

Tanya Rudakevych (Perón's Mistress) is a second-year in the College, majoring in Math. This is her first UT production.

Hannah Landes (Music Director) is a first-year in the college, and is interested in evolutionary-developmental biology and music. This is her first production with UT.

Cassandra Verhaegen (Violin) has been playing violin for 9 years and played in 4 musicals. This is her first UT production and it is swell to be back in the pit.

Zachary Trail (Percussion) is a first year in the college. He has played percussion for eight years, including work with the Rose Theater Company in Omaha, Nebraska.

Alicia Zhao (Piano) is a first-year of a yet-undecided major in the College. She has been playing the piano for 12 years and is excited to be the pianist for A Little Star Quality. Alicia has also acted in Attori Senza Paura, UChicago's Commedia dell'Arte Troupe.

Alexandra Garfinkle (Director) is a third-year in the College. She has worked in University Theater as a production manager, stage manager, designer, and a director. In addition to these roles, she serves on UT Committee.

Ariela Subar (Stage Manager) is a first-year student in the college. She has previously worked on Hedda Gabler (Assistant Lighting Designer), croMagnum (Assistant Stage Manager), and Godspell (Crew). She will also be working as an Assistant Sound Designer for Much Ado About Nothing later this quarter.

Noah Baskes (Lighting Designer) has been designing lighting for five years on an educational, community, and professional level. Some favorite designs include Rent (All-Ohio 2013) and Accomplice (Raconteur Theatre Company).

Yiwen Feng (Costume Designer) is a third year Gender & Sexuality Studies major who has assistant costume designed for As You Like It and directed and served as costume, props, set, and sound designer for CESFest 2014's Thrill Me: The Leopold and Loeb Story. Yiwen is currently also the dialect coach for Sleuth.

Luke Duroc-Danner (Choreographer) is a second-year Music major in the College who has previously worked on The Glass Menagerie, The Drowsy Chaperone, and The Clean House with UT. He has been dancing American-style ballroom and rhythm for 6 years and has competed at the silver and gold level.

Kyle Yeh (Robert Barclay) is a first-year prospective Linguistics major in the College and is indubitably honored to be a part of The Still Alarm. This is his second UT show, having played Polonius/Hamlet in Hamletmachine this past fall.

Lexi Turner (Edna Jameson) is a first-year, barely an ember in the flames of UChicago. This is her second UT show, after playing Aunt Julie in Hedda Gabler last Fall kindled her love for theater. She is very excited to be a part of workshops this quarter, and knows these shows will be a blazing success.

Stefan Popov (First Fireman) is a first-year unsure about a major yet. This is his UT debut!

Alex Hearn (Director) is a first-year at the University. He is involved with UChicago Commedia and this is his first UT production.

Jamie Keener (Stage Manager) is a first-year at UChicago. This is her second time working for University Theater and her first time working as a Stage Manager. She has also worked as Assistant Set Designer for Hamletmachine fall quarter, and she hopes you enjoy the Workshops!

Noah Baskes (Lighting Designer) is a first-year Physics major and lighting designer. He has been involved with lighting since the start of high school and wants nothing more. Past work includes design for Waiting for Godot (Shepard), Rent (All-Ohio) and Mrs. Ohio America.

Yiwen Feng (Costume Designer) is a third-year Gender and Sexuality Studies major who is currently also costuming A Little Star Quality and dialect coaching for Sleuth.

Derek Spencer (Director), a fourth-year Philosophy & Public Policy major, makes his directorial debut in this production of A Crackup at the Race Riots. He has previously appeared as an actor in UT productions The Hamletmachine (Gertrude/Hamlet, Fall 2013) and The Merchant of Venice (The Duke, Spring 2013), played in the pit (bass) for last quarter's Godspell, and recently guest starred in the sitcom pilot for Party O'Clock (Sasha). Outside of theater, Derek regularly writes and records his own musical compositions.

Chaucey Slagel (Asst. Director) is a first-year, and thrilled to work with all of these lovely people in her first time Assistant Directing for UT. Enjoy the show!

Maggie Vaughn (Ensemble) is performing in her last UT production with Director Derek Spencer, and couldn't be happier. She has appeared in Twelfth Night (Maria), A Midsummer Night's Dream (Titania) and more!

Hadar Lazar (Ensemble) is a second-year who plans to major in Physics or Math. UT is a good excuse to be somebody else.

Noah Baskes (Lighting Designer) is a first-year Physics major and lighting designer. He has been involved with lighting since the start of high school and wants nothing more. Past designs include Accomplice (Raconteur), The Elephant Man (DCHS) and Alice in Wonderland (Abbey Theatre).

Riley Kreger (Production Manager) has worked in a wide variety of roles on many productions, but for the most part focuses on scenic design. His designed and built (with much help) the sets for Reefer Madness: The Musical, The Glass Menagerie, Grey Gardens, and Fool For Love.