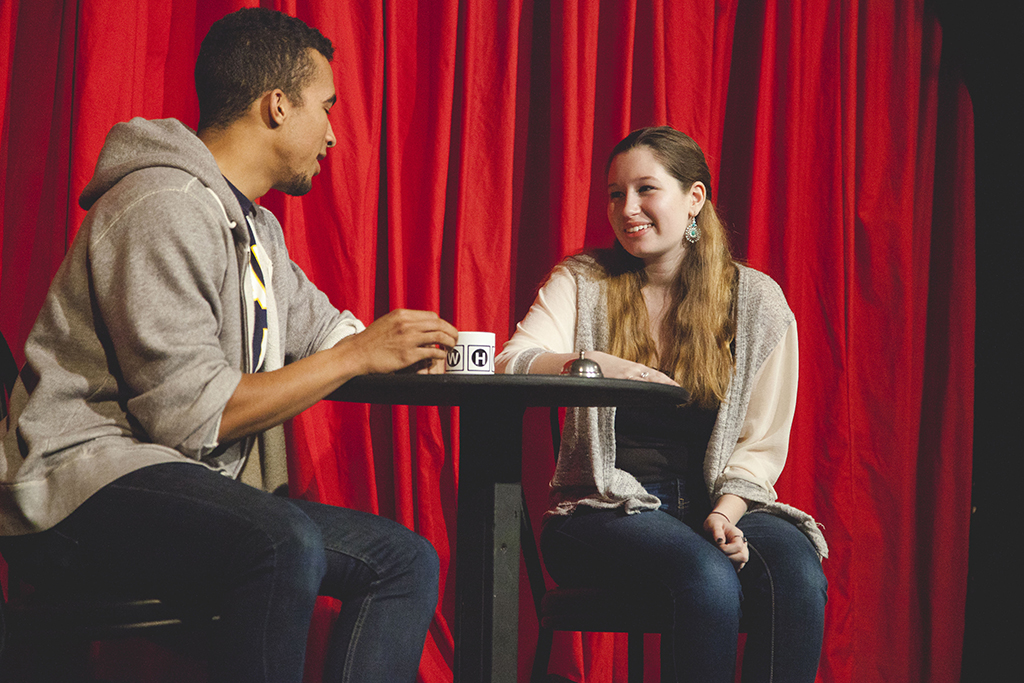 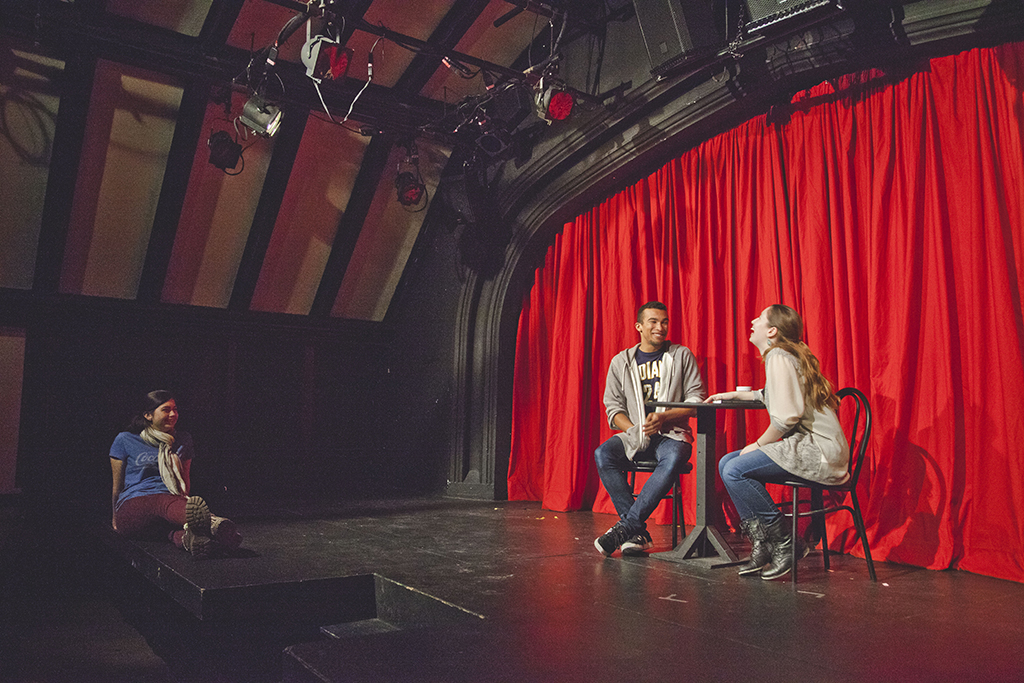 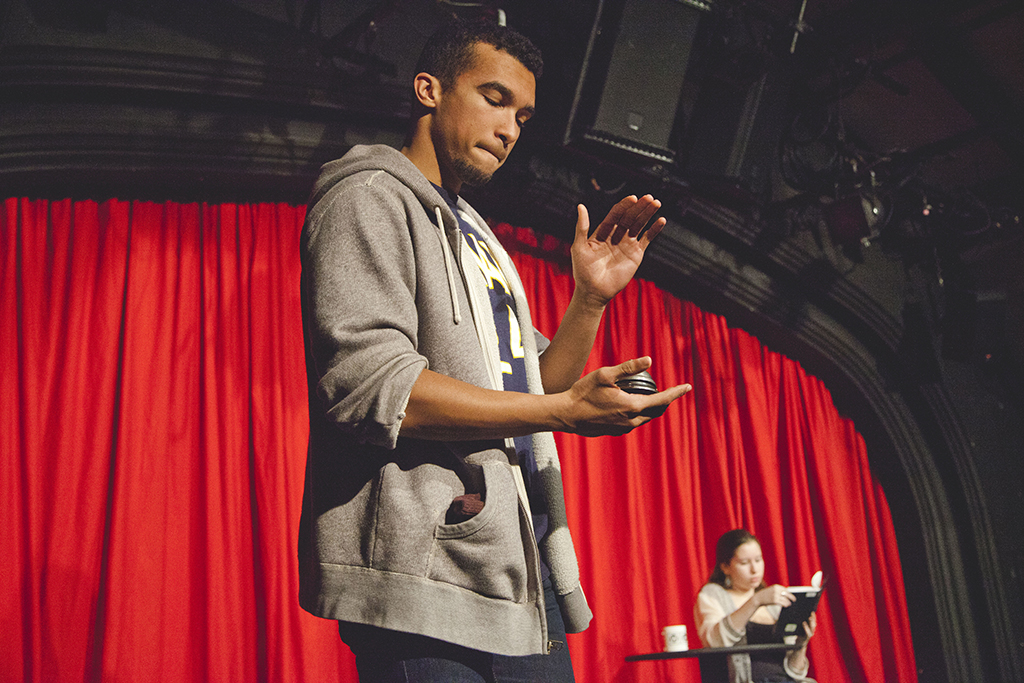 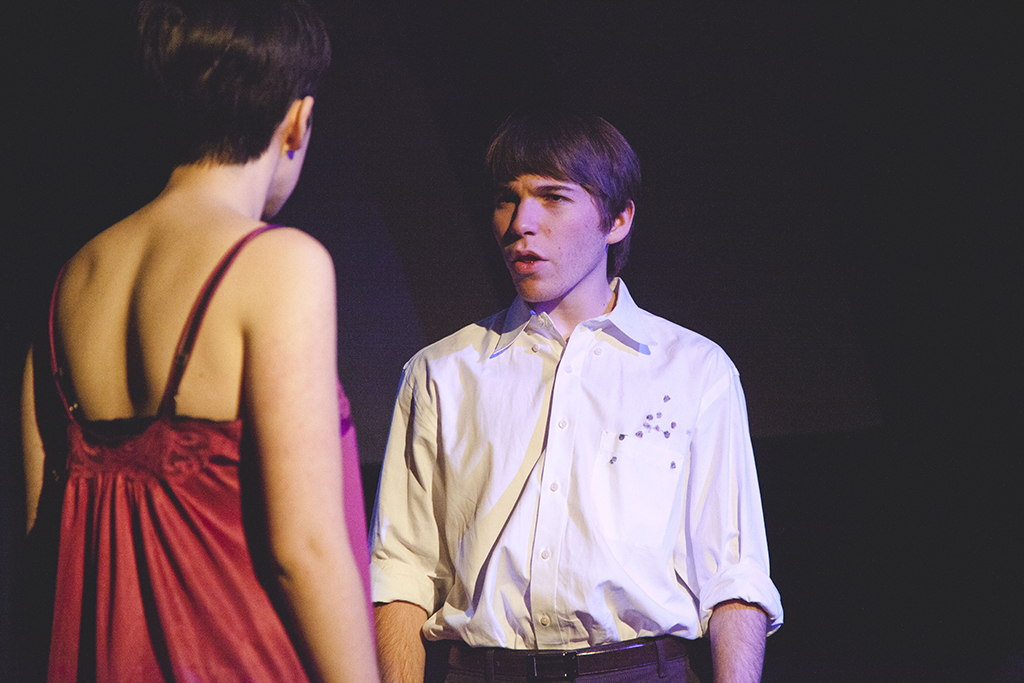 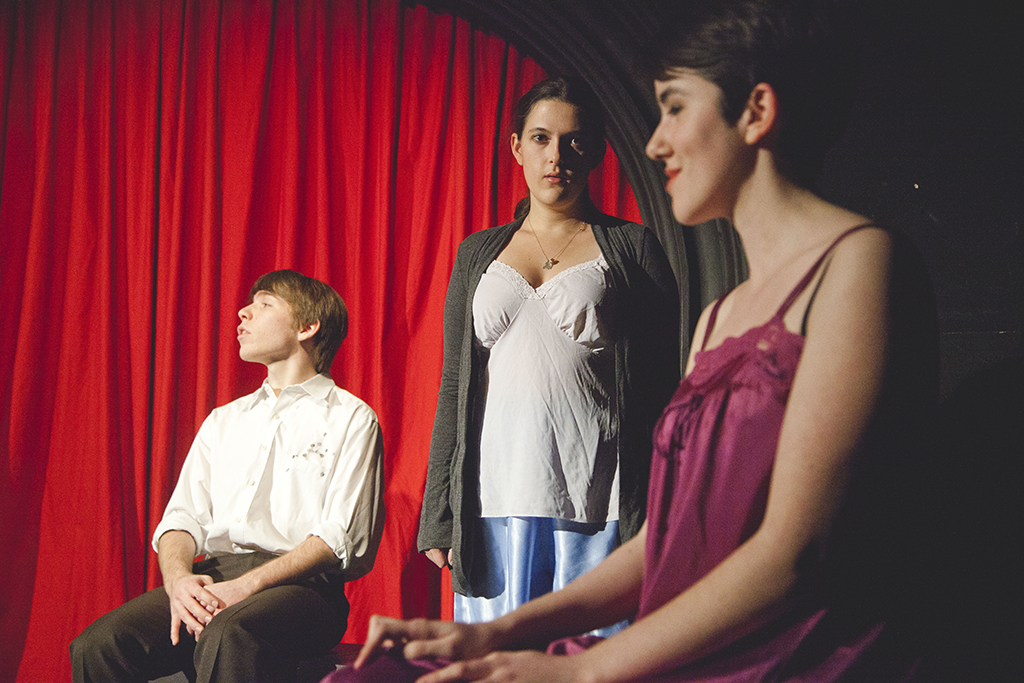 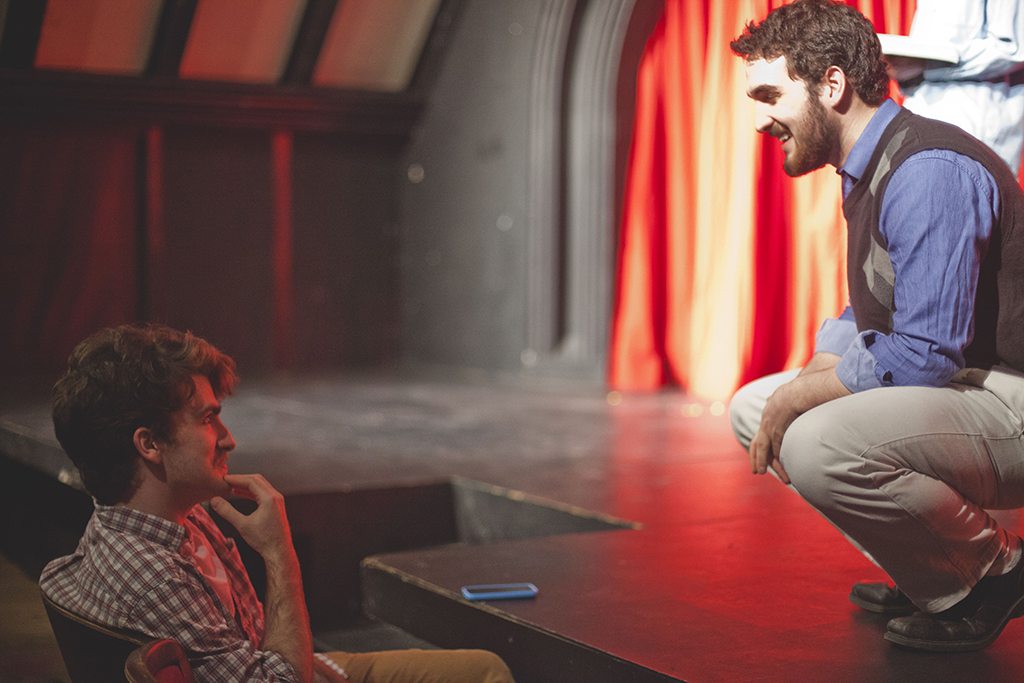 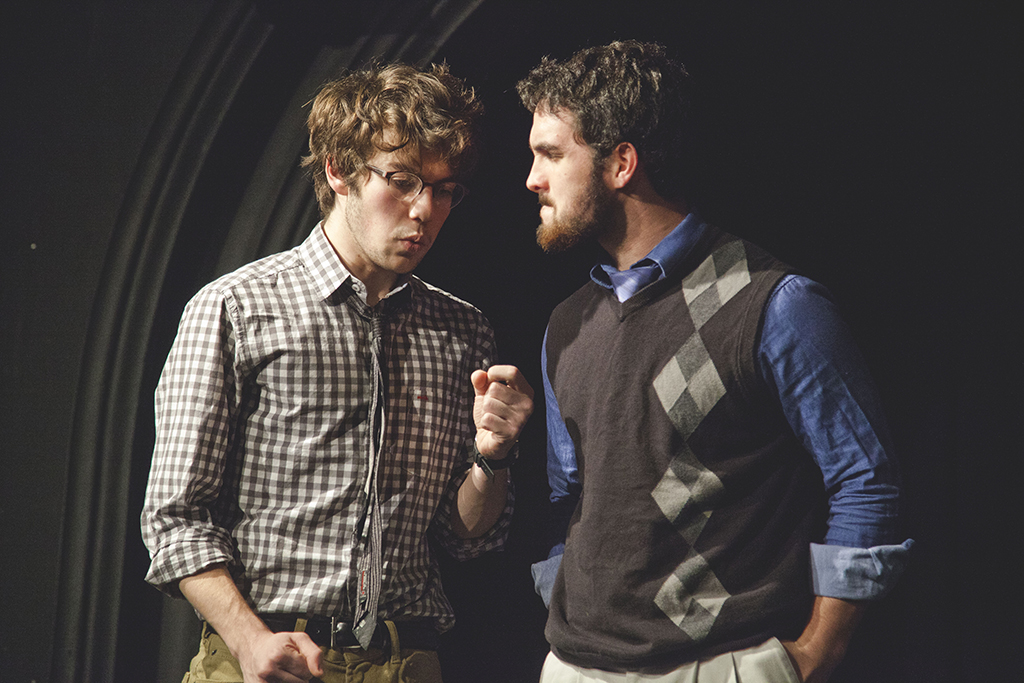 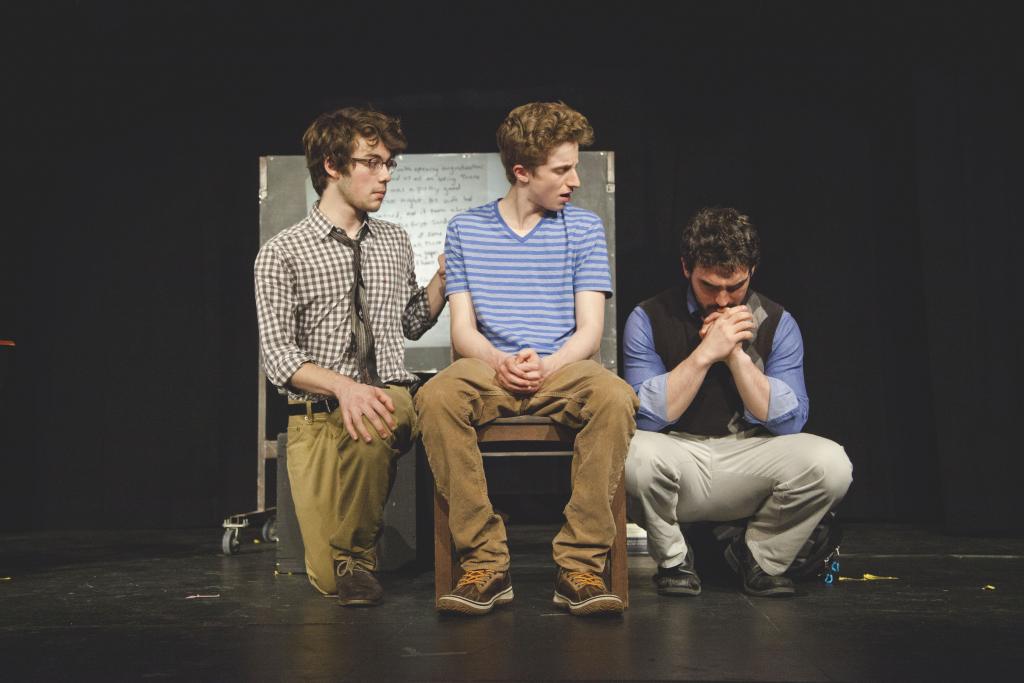 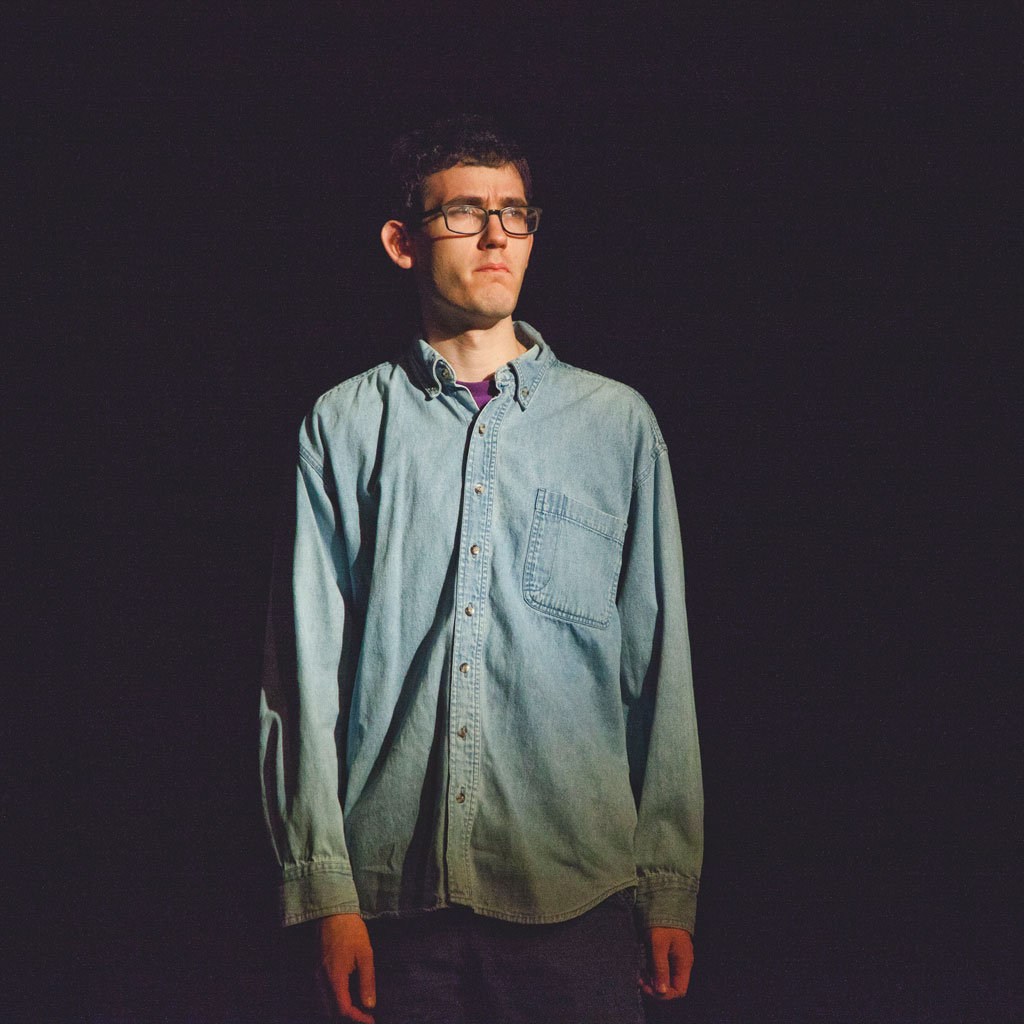 Every quarter, Workshops give student directors the opportunity to stage big ideas in small ways. Productions are always constrained technically, but this quarter the focus is on other forms of constraint. Kayla Mathisen directs No Exit by Jean-Paul Sartre, where hell is a room full of strangers who may not be so strange. Maria Decker presents David Ives' Sure Thing, the tale of a romance which developes exactly according to plan. And Springwood Centeral Honors Society is a play written and directed by Christopher Deakin, about a student trapped in their diary and in the world of their youth.

written and directed by Chris Deakin

Ian Chronis (Garcin) is a second-year Chemistry major in the College.  He previously appeared in University Theater's The Doctor and Ariel in The Tempest (Caliban) and CES's Oedipus (Creon).

Clair Fuller (Estelle) is a second-year in the College majoring in Gender & Sexuality Studies and English. She appeared in the Spring 2013 production of The Vagina Monologues.

Emma Pauly (Inez) is a second-year TAPS major in the College. She has previously appeared in last year's Lysistrata (Calonike) and has assistant directed last year's The Merchant of Venice and this year's Commedia extravaganza.

Kayla Mathisen (Director) is a second-year in the College.

Caety Klingman (Stage Manager) is a third-year English major and Cinema & Media Studies minor in the College. She has previously stage managed a Top Girls workshop, assistant stage managed The Lion in Winter, and assistant production managed True West. She has also served as a master painter for The Drowsy Chaperone, an actress for The Vagina Monologues, and an actress and writer for new work pieces.

Chase Woods (Bill) is a first-year student at UChicago. He is undecided but considering a dual major in TAPS and Public Policy. This is his first UT performance and he could not be any more excited.

Sydelle Keisler (Betty) is a first-year prospective English major at the University of Chicago. She is very excited to perform in her first University Theater production!

Maria Decker (Director) is a third-year Math major.  She has previously worked on As You Like It (Stage Manager) and The Story of the Twelve Dancing Princesses (Stage Manager).  She is also currently props designing for A Midsummer Night's Dream, opening later this season. Sure Thing is her sixth UT show and her directorial debut.

Margeaux Perkins (Stage Manager) is a third-year TAPS and English major with a minor in German. She's directed and acted in several UT productions. This is her first time stage managing.

Alex Morales (Simon Barr) is a first-year in the College, and is making his stage debut in Springwood Central Honors Society as the text-obsessed Simon Barr. Hailing from North Carolina, he is at UChicago studying Psychology and TAPS.

David Jaffe (The Janitor) is a second-year Classics major. He has previously appeared in Theater[24].

Chris Deakin (Director) is a third year studying Theater and Performance. His credits include The Glass Menagerie (Tom), The House of Yes (Marty), Hedda Gabler (Lovborg), and High School (Various).

Rebecca Edwards (Stage Manager) is a third-year Gender and Sexuality Studies major in the College, with a minor in English and Creative Writing. This is her first (wonderful) time being involved in UT, though her previous directing credits include Sorry Wrong Number,  Sure Thing, The Love Course, and other original sketches.

Ben Sulser (Production Manager) is a second-year Biology major in the College. He has previously worked on the previous UT productions of Hotel Nepenthe and The Hamletmachine as a Stage Manager, and also performed in CES' 'Tis Pity She's a Whore (Bergetto).