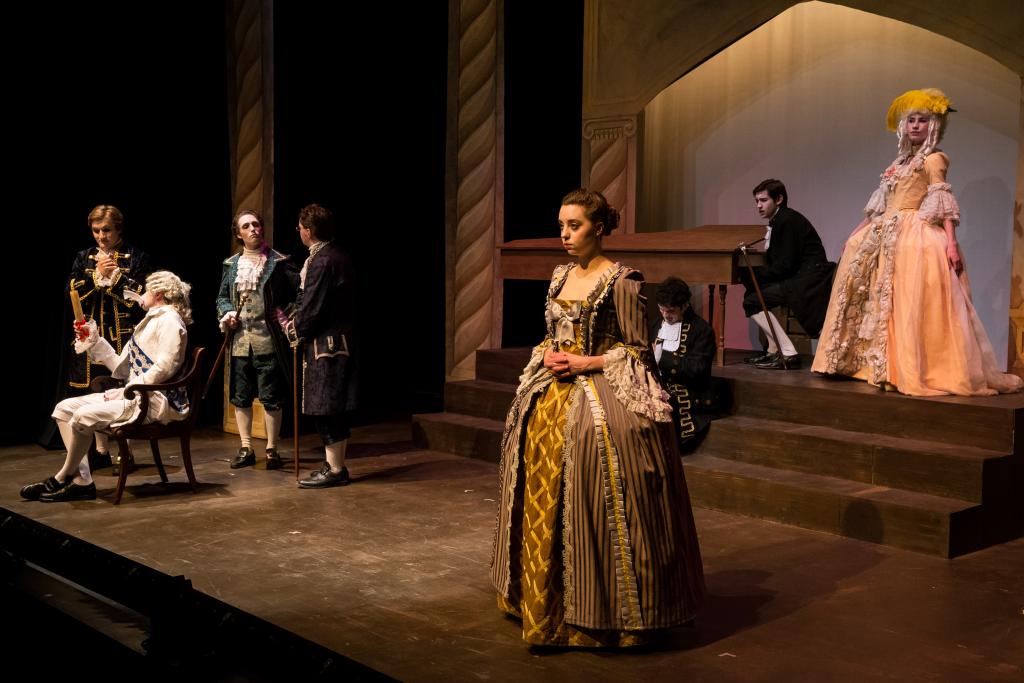 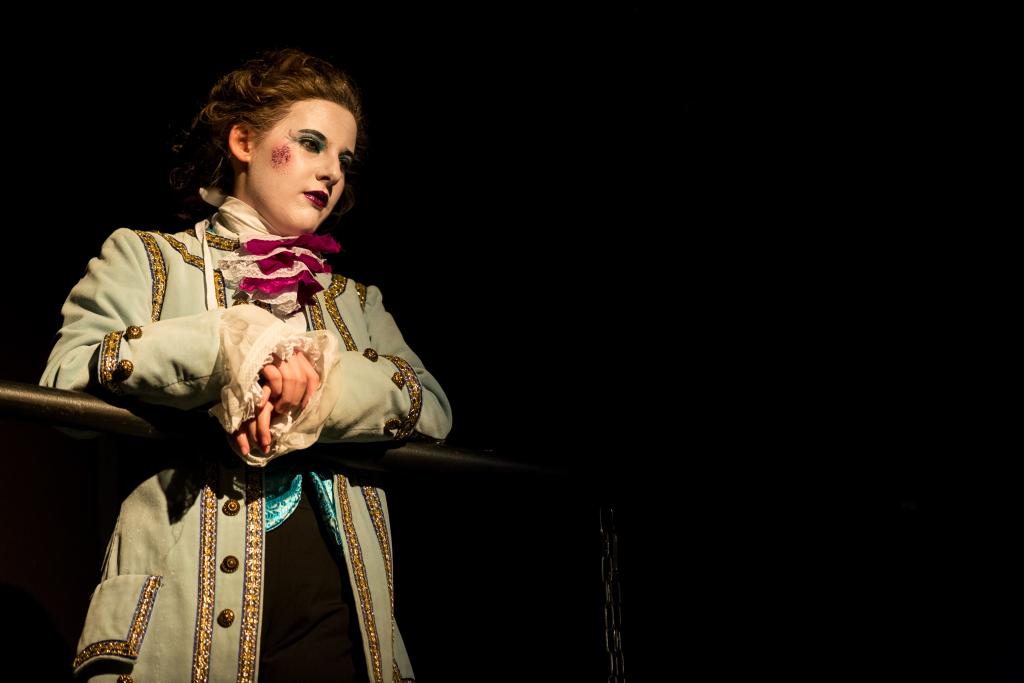 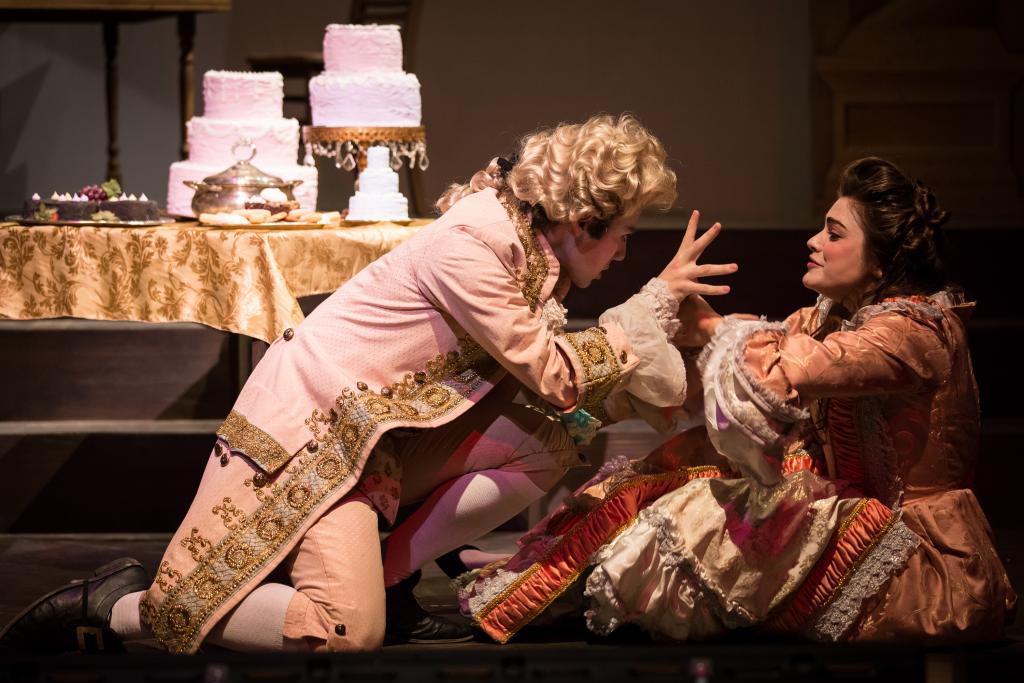 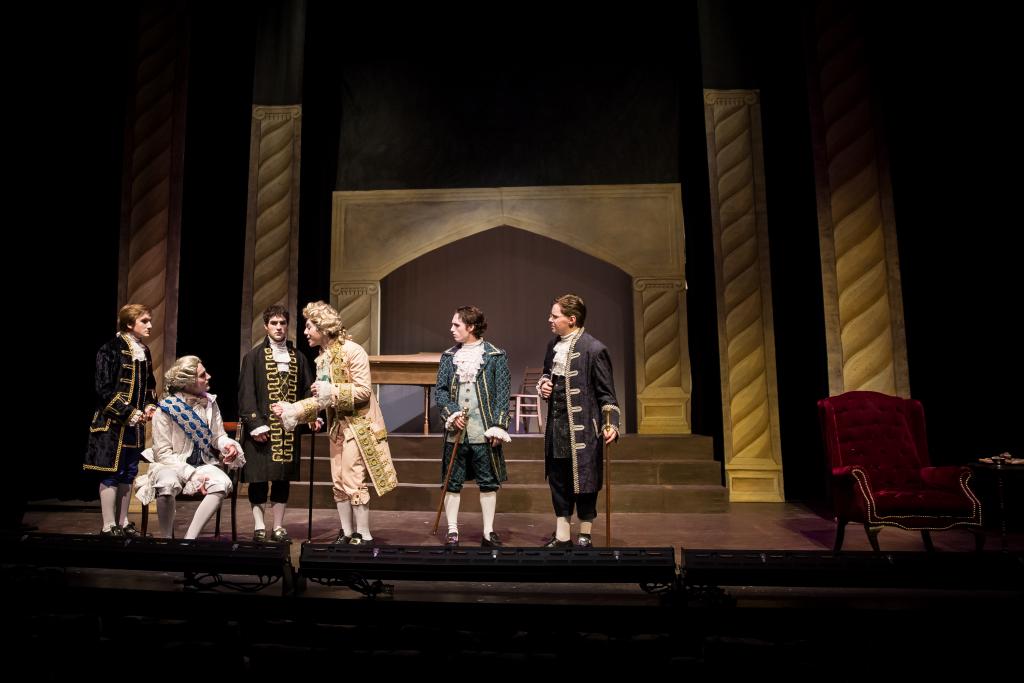 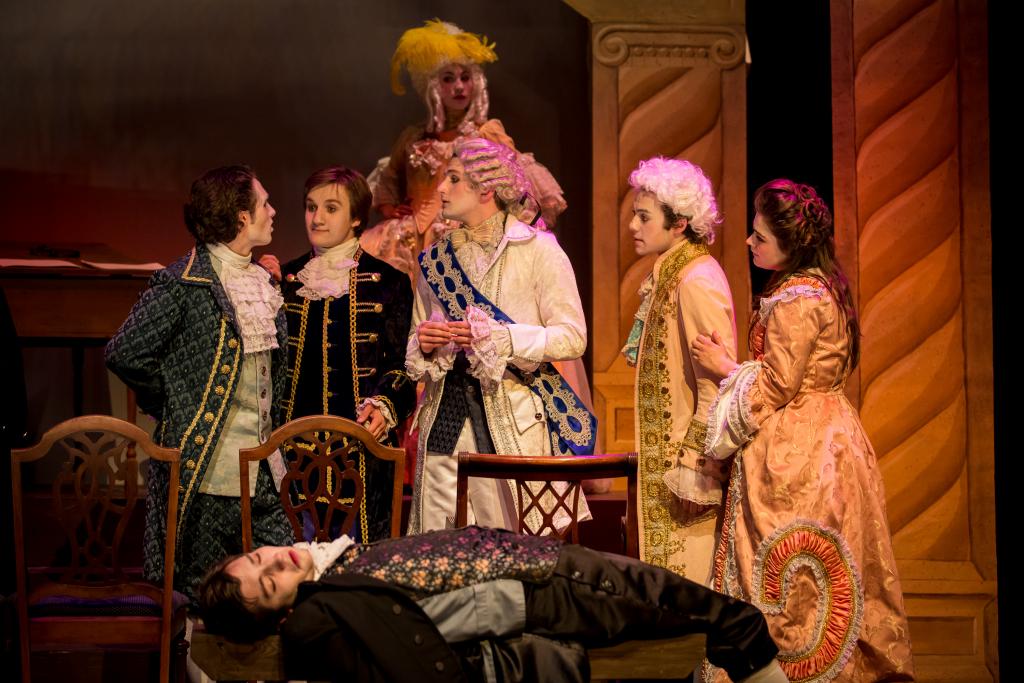 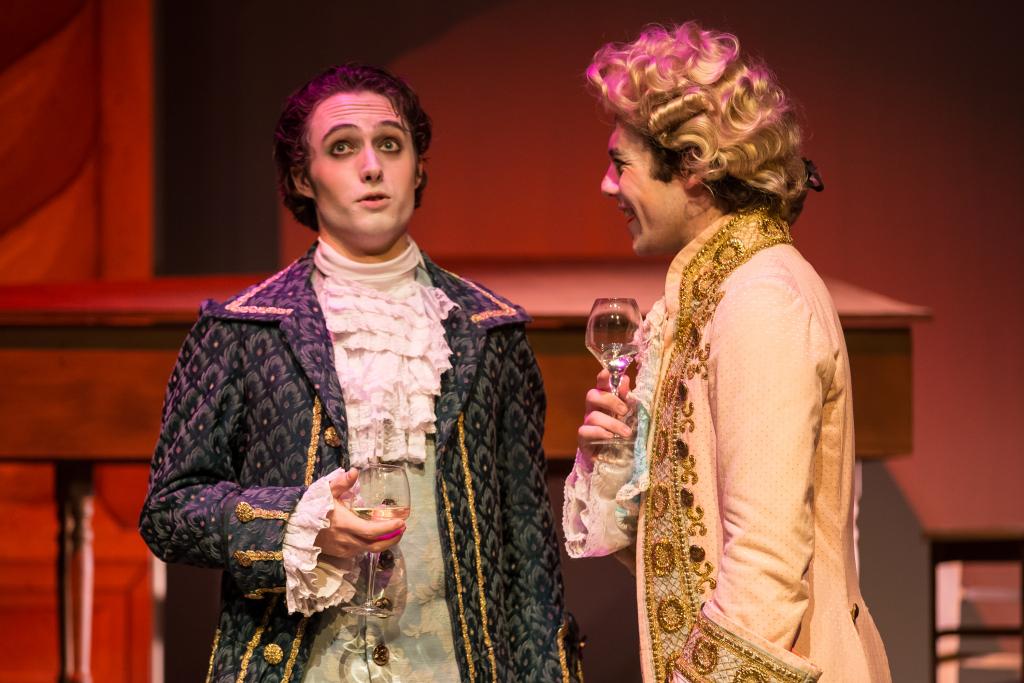 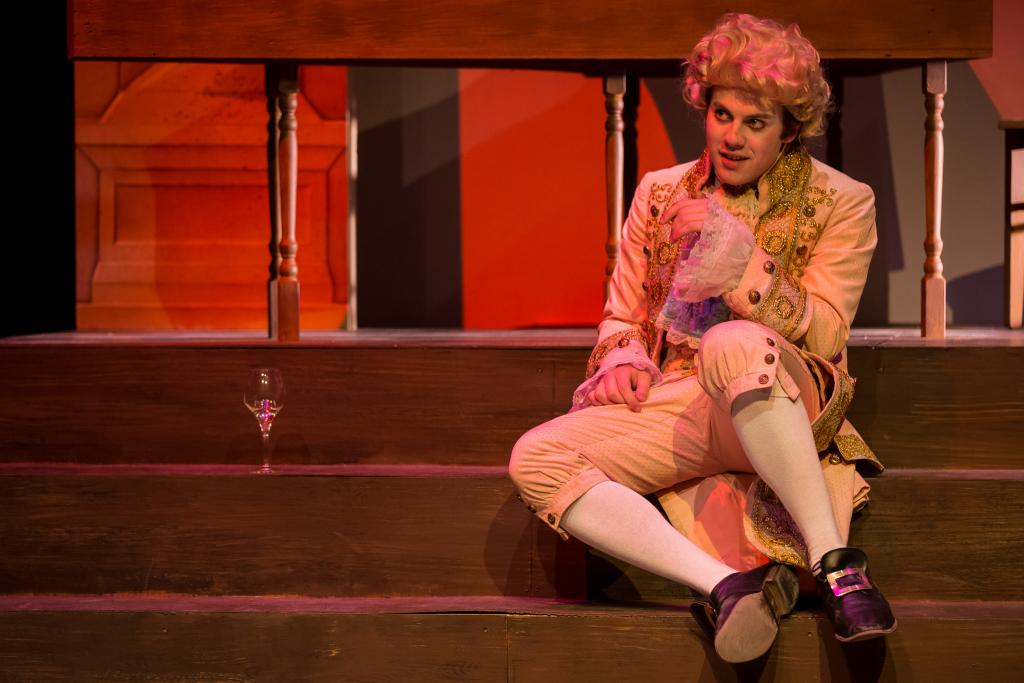 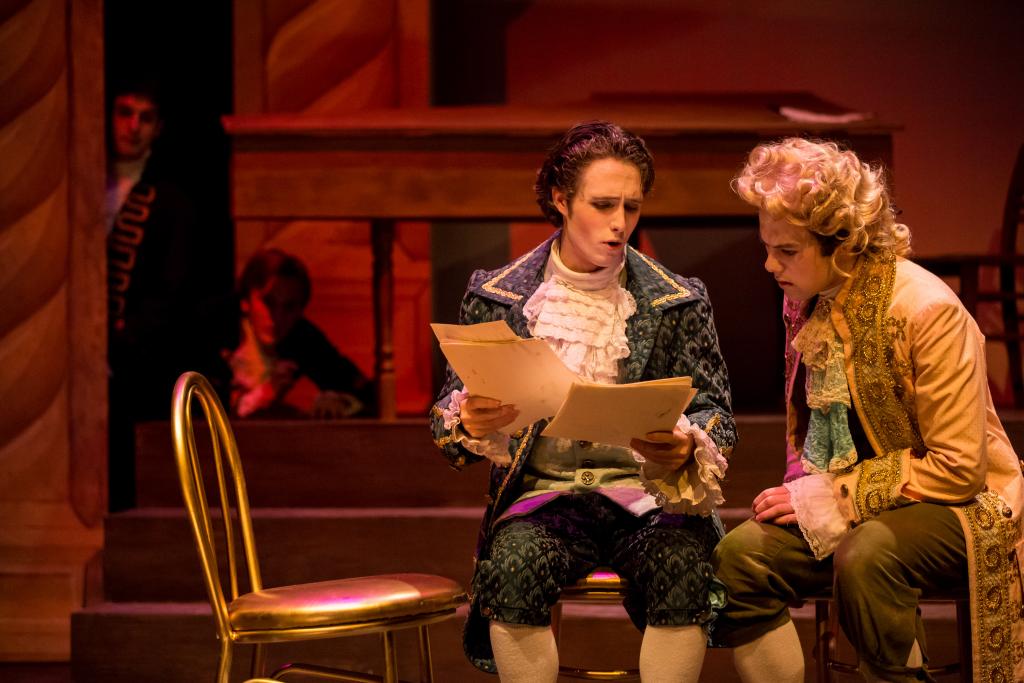 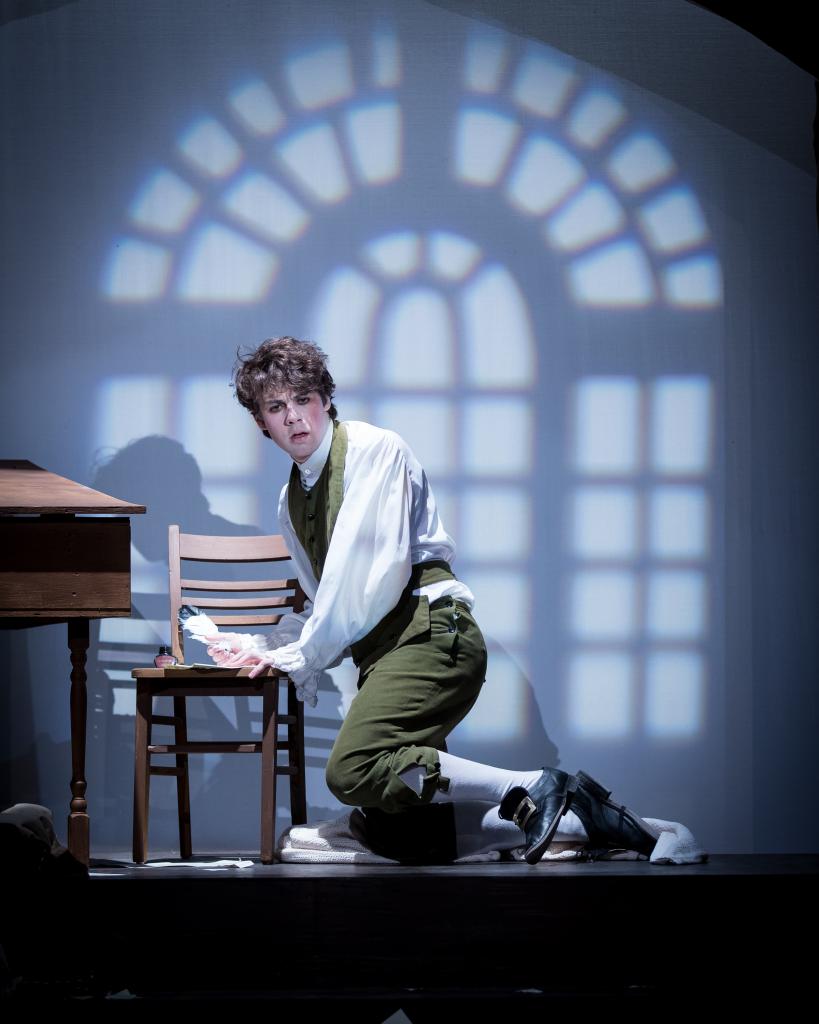 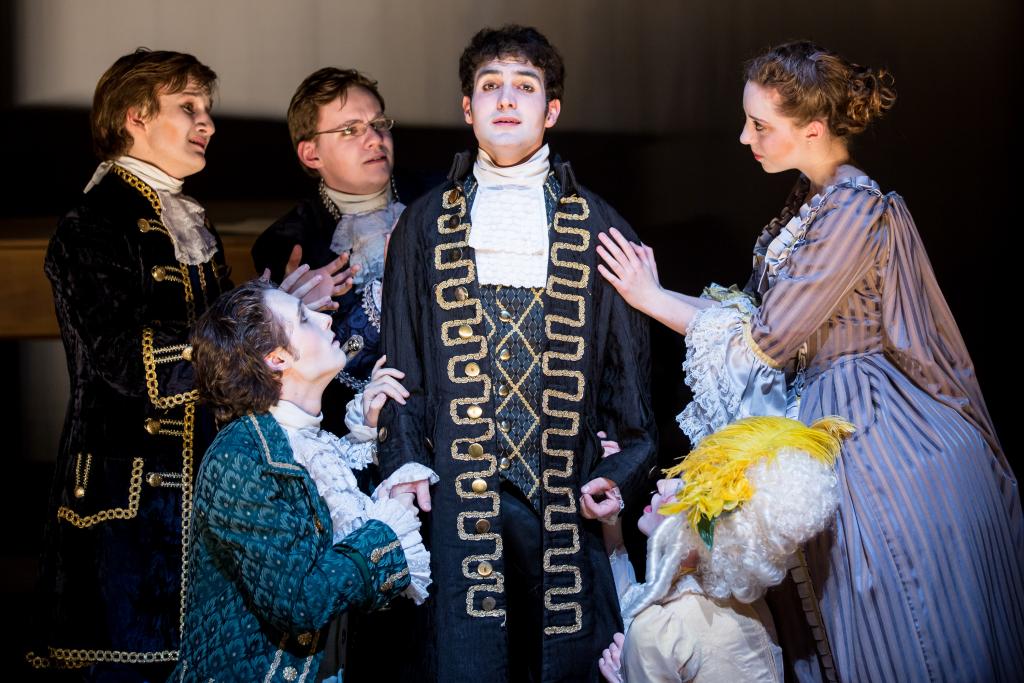 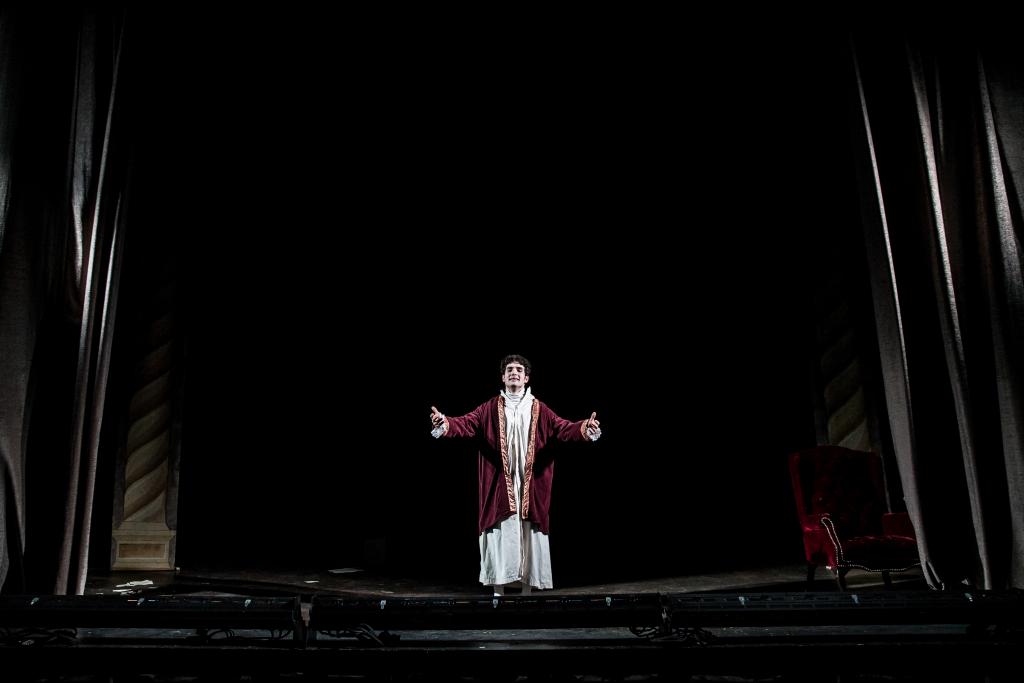 Alex Morales (Antonio Salieri) is a second-year Psych/TAPS double major, anticipating a B.A. in  2017. He has taken the stage for UT/TAPS in Springwood Central Honors Society, A Streetcar Named Desire, Closer, and this quarter as Salieri in Amadeus, and next in the TAPS pro-show musical this coming spring.

Ellie Smith (Constanze Weber) is a student in the College.

Sam Audette (Emperor Joseph II)  is a second-year Law, Letters and Society major. This quarter, he also performed as Frankenstein in a CES radio adaptation of the classic novel.

Jackson Ruzzo (Wolfgang Amadeus Mozart) is a second-year Computer Science major, TAPS minor in the College. This is Jackson's fourth show with University Theater. Recent roles include: Man, Talk to Me Like the Rain and Let Me Listen (Fall 2014), and Milo Tindle, Sleuth (Spring 2014).

Neal Jochmann (Count Johann Kilian von Strack) is a second-year currently studying Computer Science and Chinese. He has previously acted in one UT workshop What A Wild Party! (Fall 2014).

Alexander "Xander" Eichner (Count Franz Orsini-Rosenberg) is a second-year in the College, likely majoring in History and Math. This is his fourth show with UT.

Adam Johnson (Baron Gottfried van Swieten) is a second-year in the College. Previously with UT, he has directed (Talk to Me Like the Rain and Let Me Listen...), acted (Grey Gardens, A Little Star Quality), and been on production staff (Godspell, Macbeth). He is also a member of University Theater Committee.

Melissa Needlman (Venticello 1) is a second-year Comparative Human Development major with a Human Rights minor. Previous UT credits include Feliz Navi-Dad I’m Gay and Just Kidding, Unless You Want To as an ensemble member of the 28th generation of Off Off Campus.

Jakob Solheim (Cook/Majordomo/Priest/Servant) is a student in the College.

Jonathan Bianchini ( Valet/Kappelmesiter Bonno/Servant) is a student in the College.

Maggie Strahan (Teresa/Servant) is a first-year in the College with a potential TAPS major. Her recent UT credits include Woman in Talk to Me Like the Rain and Let Me Listen, during fall quarter, and her favorite role was the Wicked Witch in the Wizard of Oz.

Peyton Walker (Katherina Cavalieri/Servant) is a first-year with intentions of majoring in Visual Arts and Art History. Her past experience with UT was in the Workshops Fall Quarter 2014 when she played Kate in What a Wild Party.

Allie Garfinkle (Director) is a fourth-year Theater and Performance Studies major. She has trained at Black Box Acting Studio, serves on UT Committee and has garnered more than a dozen credits as a designer, dramaturg, and director. She has worked as the assistant director of A Christmas Carol at the Goodman Theatre. Additionally, she has held positions at Redmoon Theater and Court Theatre.

Shuwen Qian (Production Manager) is a fourth-year in the College. He has been involved with many UT productions over the course of his time here.

Ariella Philips (Dramaturg) is a student in the College.

Luke Duroc-Danner (Rehearsal Music Consultant) is a Music major and History minor in the College. He has previously worked on The Glass Menagerie, The Drowsy Chaperone, The Clean House, and Evita: A Little Star Quality.

Jade Goodwin-Carter (Scenic Designer) is a fourth-year in the College.

Alice Sheehan (Lighting Designer) is a first-year in the College.

Natalie Wagner (Props Designer) is a second-year student majoring in Law, Letters and Society and minoring in TAPS. She has primarily worked as a stage manager for UT on Endgame (SM), Buried in Bughouse Square, Godspell, Grey Gardens, and Hedda Gabler (ASM for all 4). She was the Assistant Set Designer for Cabaret in Spring 2014. She also serves on UT's Student Committee and has participated in Theater[24] multiple times.

Sam Baugh (Sound Designer) is a second-year Computer Sience major in the College. He was the assistant sound designer for UT's production of Godspell, and was involved in technical theater throughout high school.

Itzel Blancas (Costume Designer) is a second-year in the college studying Comparative Literature and TAPS. Her previous UT credits include; Hedda Gabler, Godspell, and Macbeth as Assistant Costume Designer, Much Ado About Nothing as Assistant Director, and What a Wild Party (Fall 2014 workshops) as the Director. She is also costume designing for the Spring's Production of The Effect of Gamma Rays on Man-in-the-Moon Marigolds.

Connor Hanna (French Consultant) is a fourth-year in the College majoring in French and minoring in Music.  Previously, he worked on Cabaret as the stage band's tenor saxophonist and is currently the booking manager/baritone saxophonist for the Dirt Red Brass Band.  After graduation, he hopes to teach either French or Music in public high schools.

Alex Hearn (Assistant Director) is a second-year. He last directed The Still Alarm in Spring 2014's Weekend of Workshops and is very excited to assist Allie on this incredible production. Previous UT credits include Nagg in Endgame and Steve in A Streetcar Named Desire. He acts as Pulcinella in UChicago Commedia.

Sasha Ayvazov (Assistant Lighting Designer) is a fourth-year Math and English major, who spends the vast majority of his nonexistent free time in theater. His experience stretches over nearly 40 shows as a director, SM, PM, actor, liaison, and every possible kind of designer. He has worked on shows with UT, Le Vorris and Vox, Attori Senza Paura, the Dean's Men, Blackfriar's, CES, Maya, and UBallet. Sasha is a member of UT committee, and is a curator for Theater[24].

William Craft (Assistant Lighting Designer) is a fourth-year Political Science major in the College and a member of Le Vorris and Vox Circus.

Daniel Heins (Assistant Technical Directer) is a first-year studying Geophysical Sciences at the College. He led his high school lighting and set crews and worked in various capacities for numerous shows among a handful of school and youth theater groups.  Through University Theater he has worked on Closer (Master Electrician), Henry V (Board Programmer), Macbeth (Carpenter), Cowboy Mouth (Master Carpenter), and Richard II (Master Electrician).

Joe Klafka (Assistant Sound Design) is a first-year in the College with an undecided major. He has previously worked on Macbeth and Theater[24].

Alex Jarman (Assistant Production Manager) is a second-year in the College double majoring in History and Political Science. Earlier this quarter he was assistant props on Cowboy Mouth, last fall he was the assistant production manager for Endgame, and last spring he acted in Cabaret (Victor).

Felicia Rustandy (Assistant Production Manager) is a second-year majoring in Biology. She is very excited to be part of a UT production.

Colin Garon (Assistant Props Designer) is a first-year in the College. His major is undecided. He previously co-designed props on Endgame by Samuel Beckett this fall.

Charlie Lovejoy (Assistant Stage Manager) is a first-year prospective Linguistics and English double-major. Last quarter, they designed for Theater[24] and were the assistant props designer for Closer; during high school, they were involved in various productions through community and school theatre as a stage manager, production manager, props designer, and actor. Charlie has also performed, coached, and stage managed at St. Paul’s professional youth circus, Circus Juventas, for ten years.

Stephanie Slaven-Ruffing  (Assistant Props Designer) is a first-year in the college and hoping to double major in Anthropology and History. Her past UT experience includes Assistant Director for Closer and involvement with Theater [24]. She also acted, wrote and directed for her high school theater department.

Sydney Purdue (Assistant Stage Manager) is a first-year in the college and an anticipated Computational and Applied Math major. This is her second production with UT, having previously worked as both an Assistant Scenic Designer and a stagehand for Macbeth.

Lauren Scott (Assistant Costume Designer) is a first-year Classics major in the College. This is her first University Theater production.