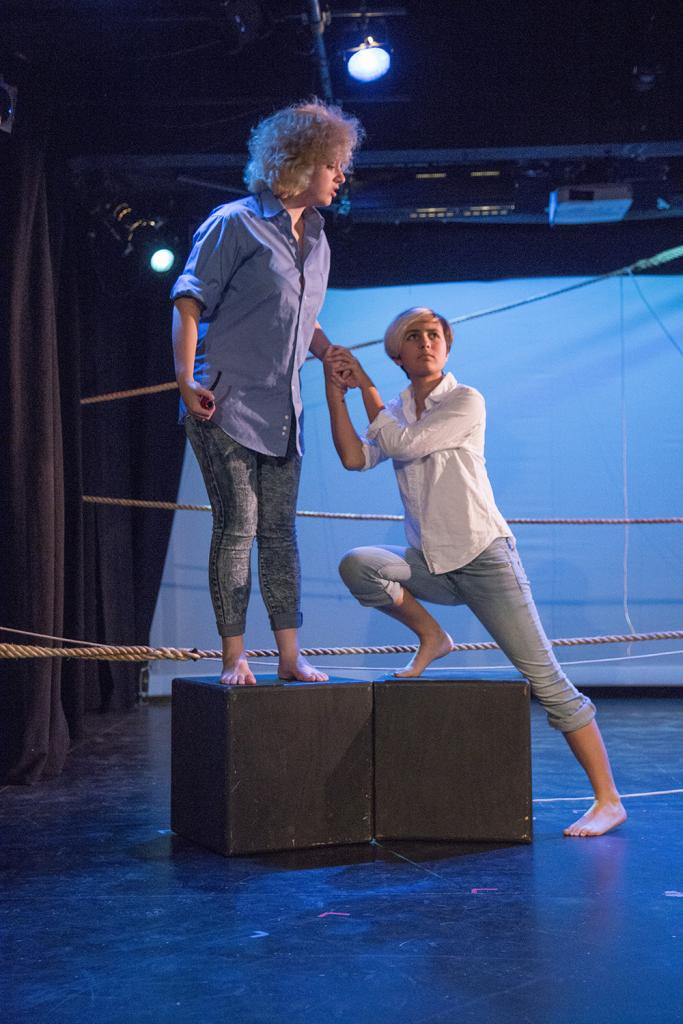 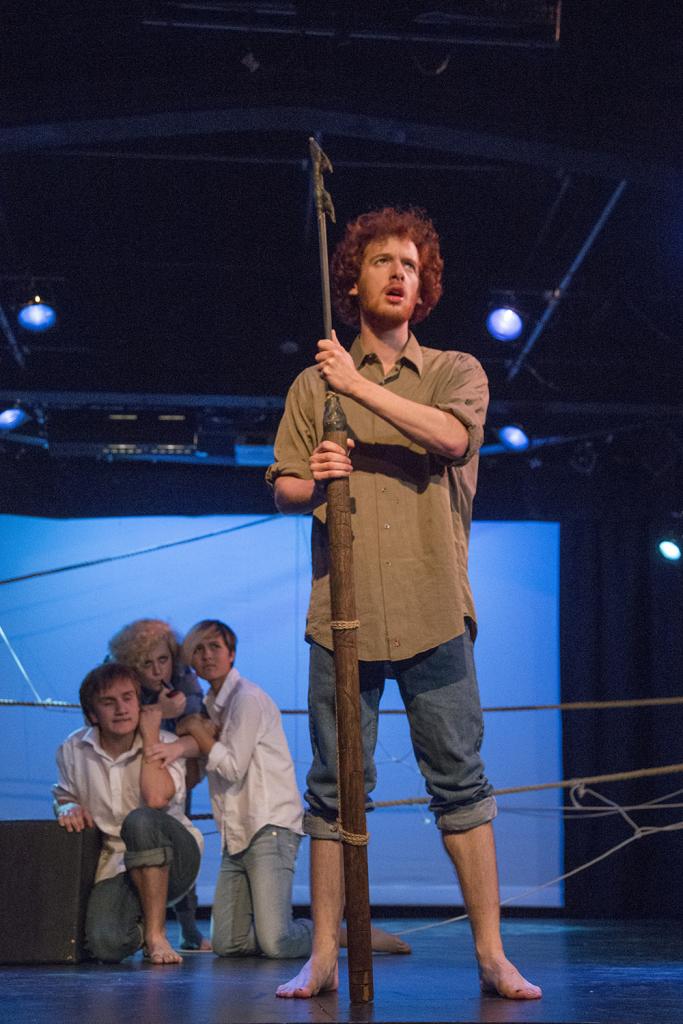 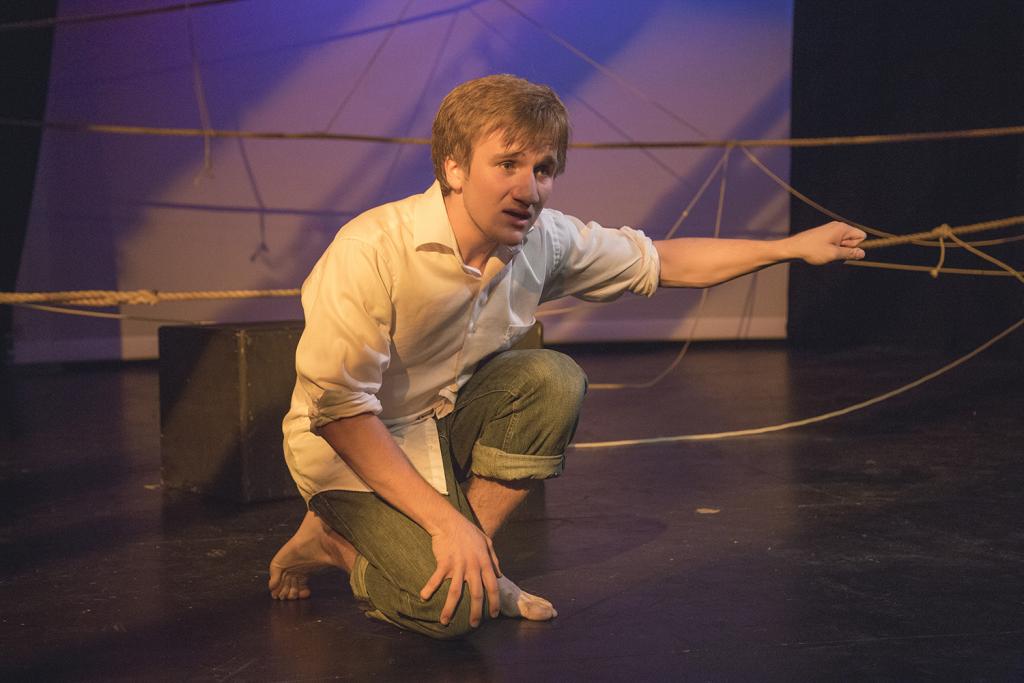 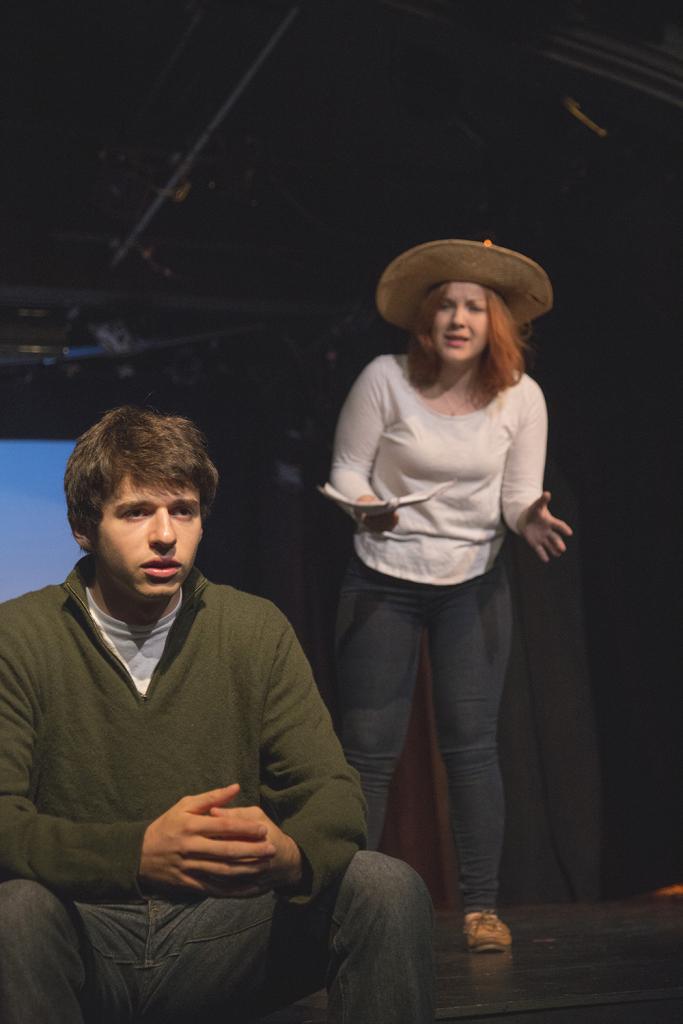 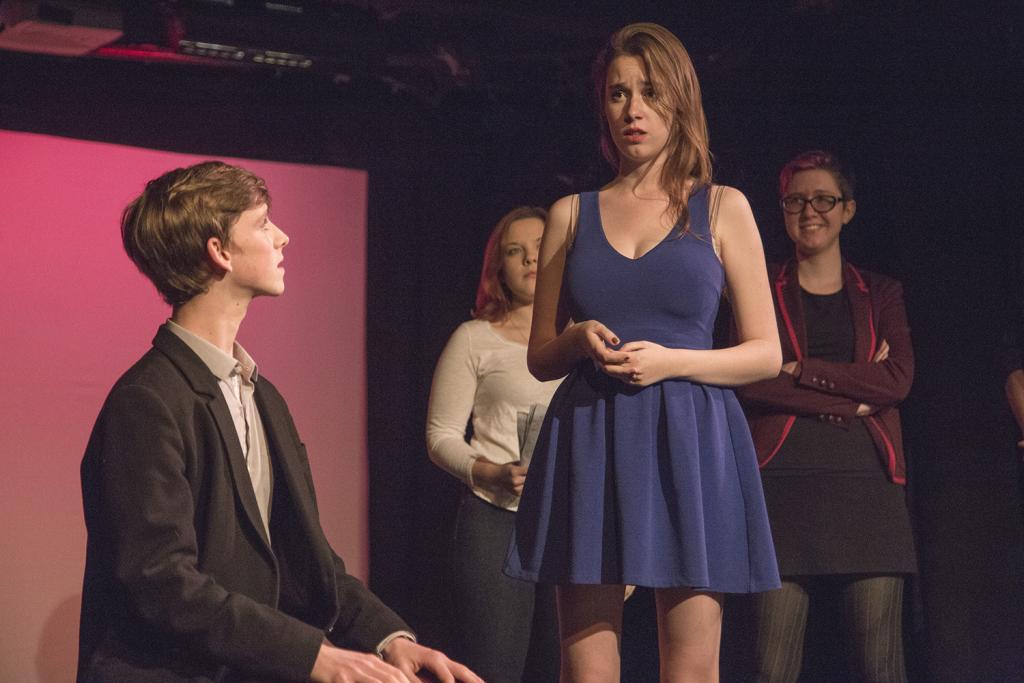 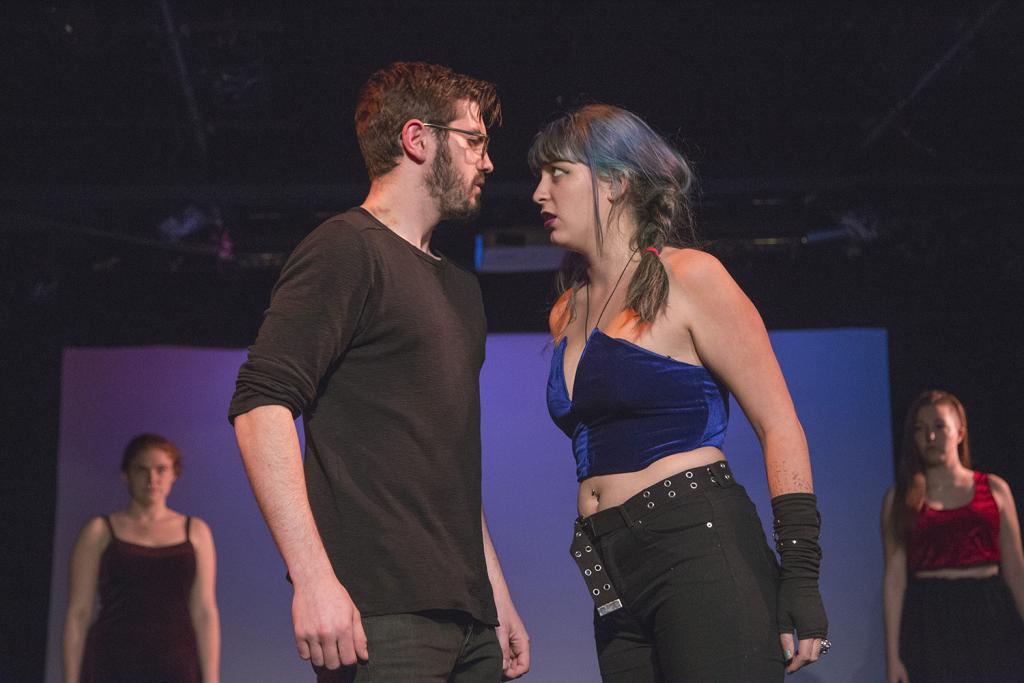 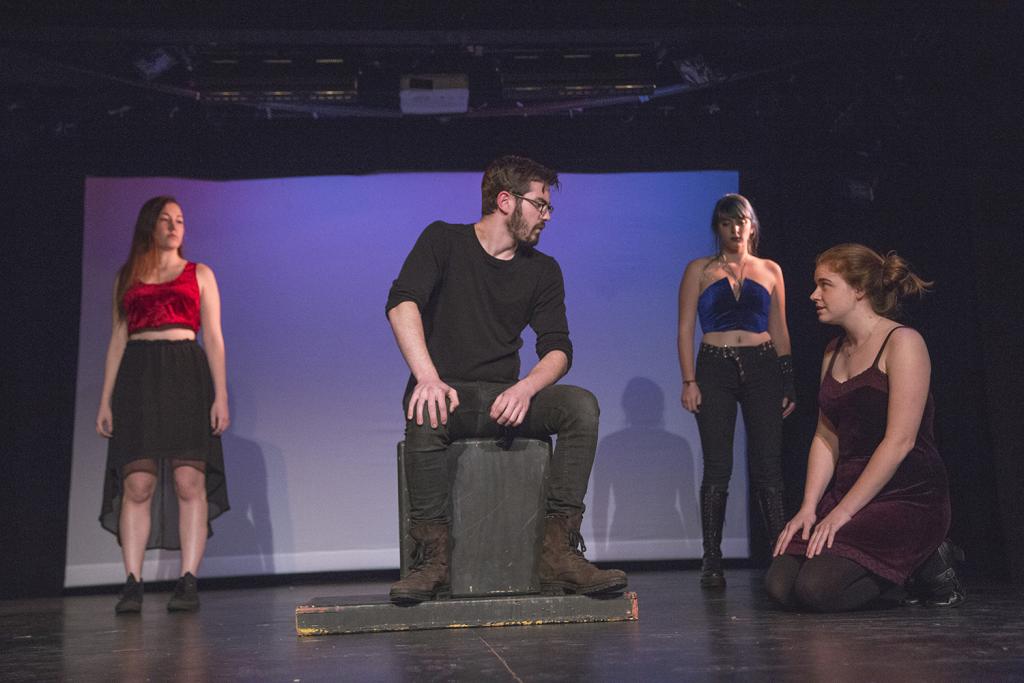 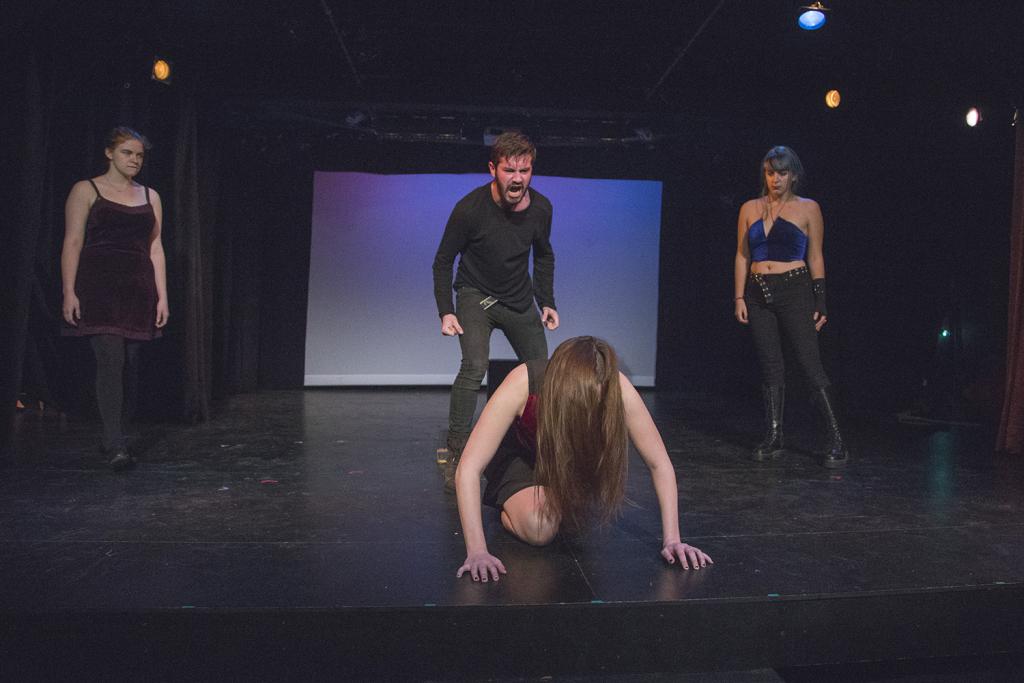 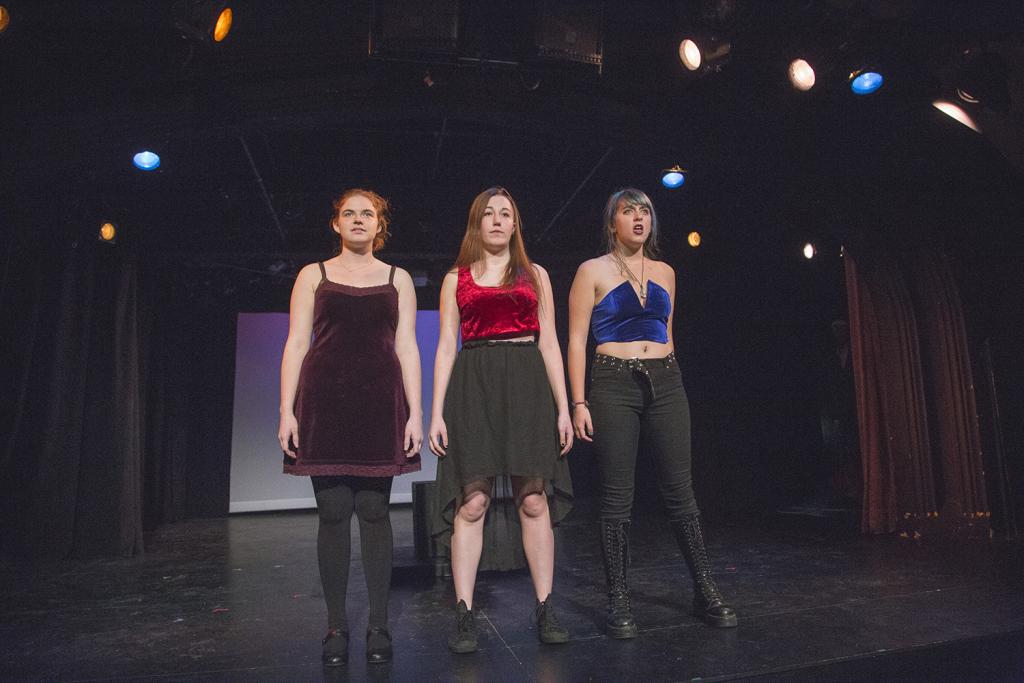 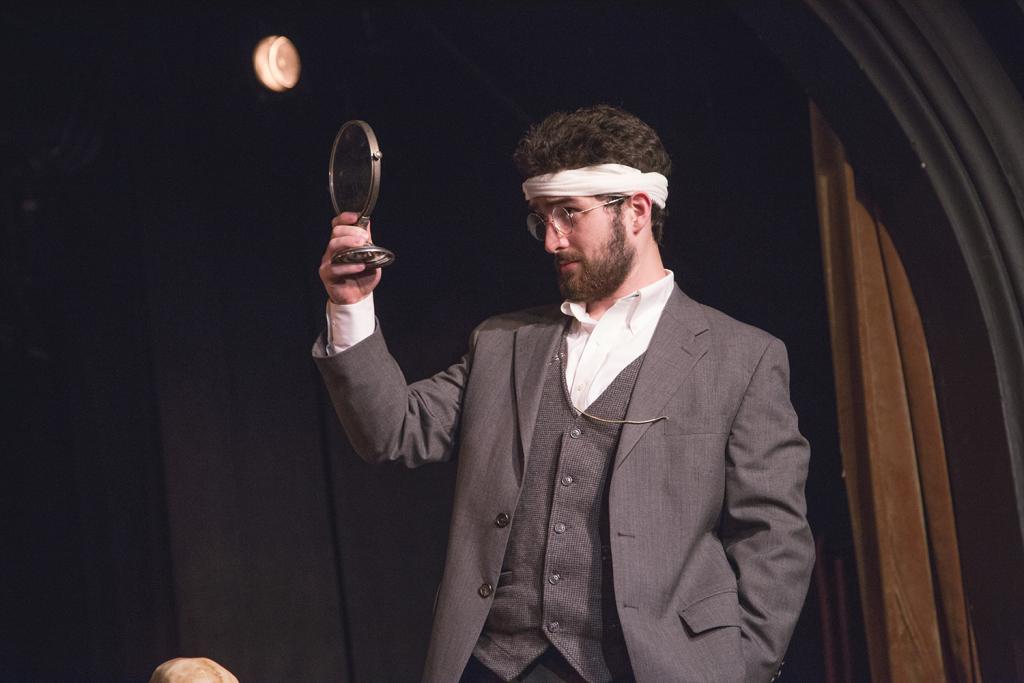 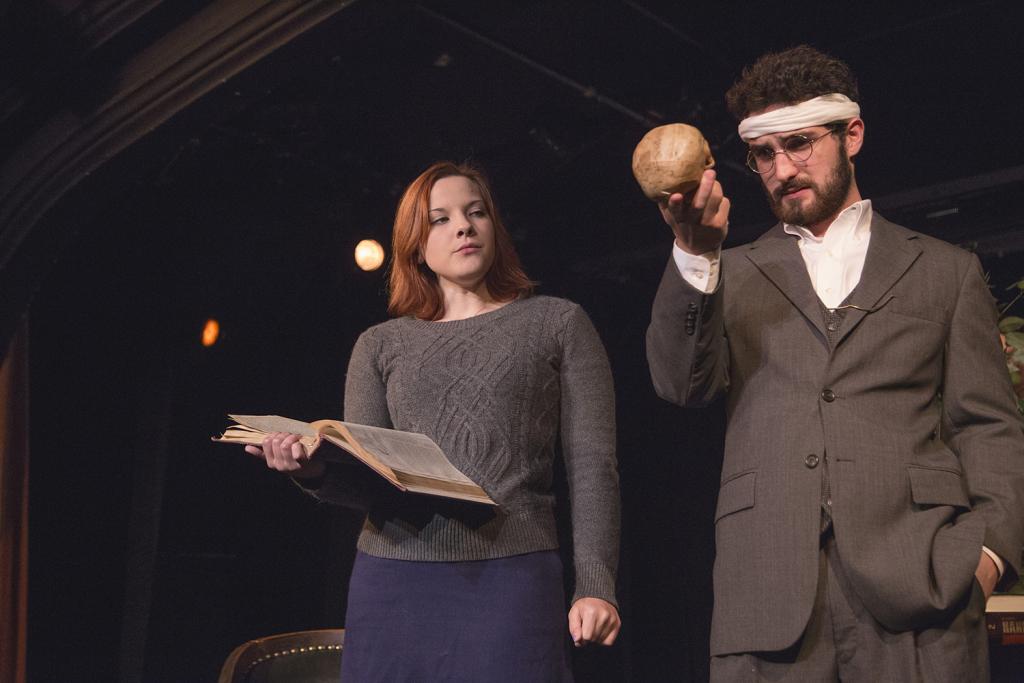 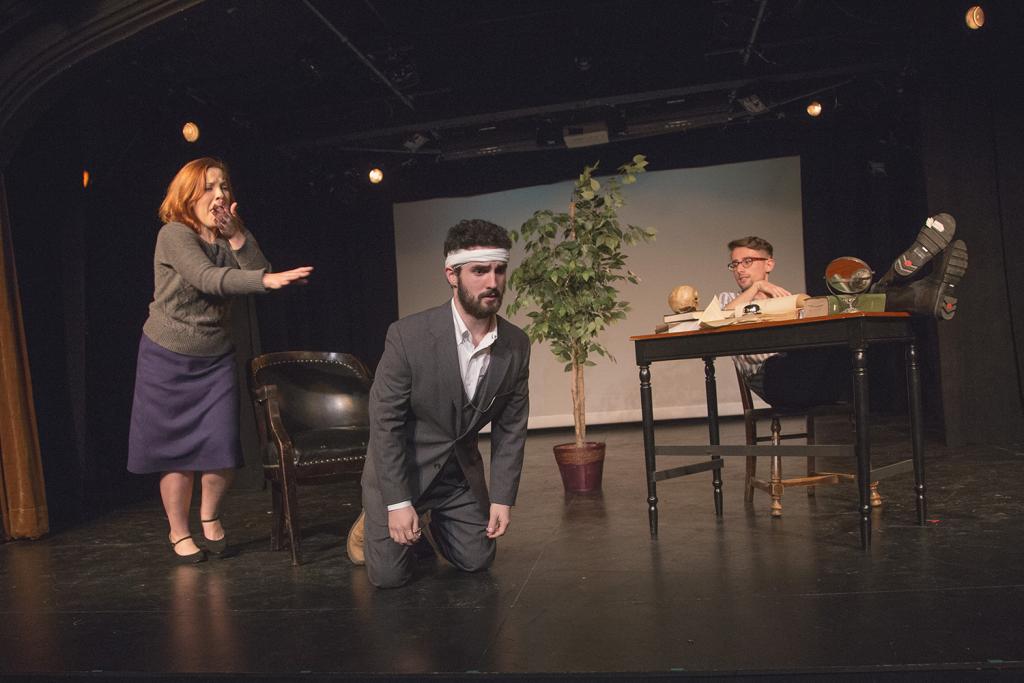 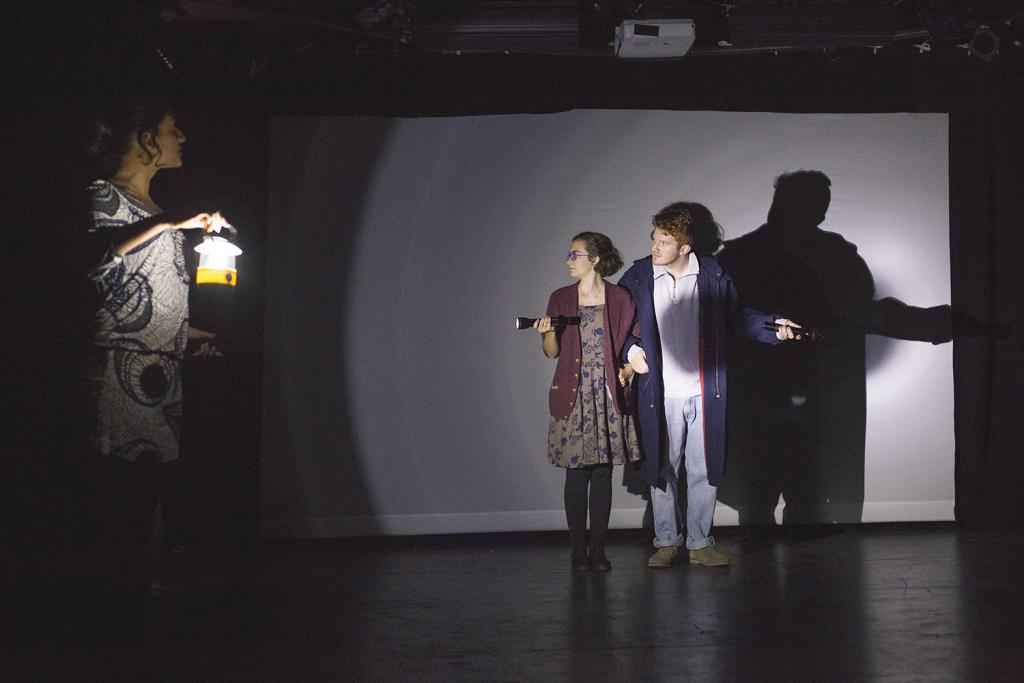 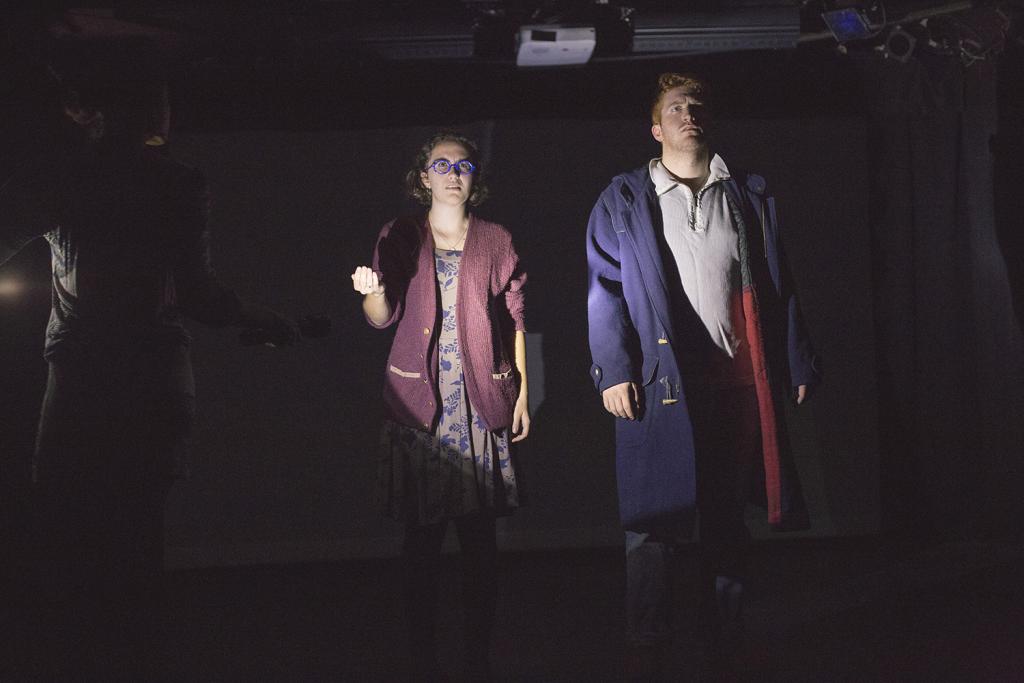 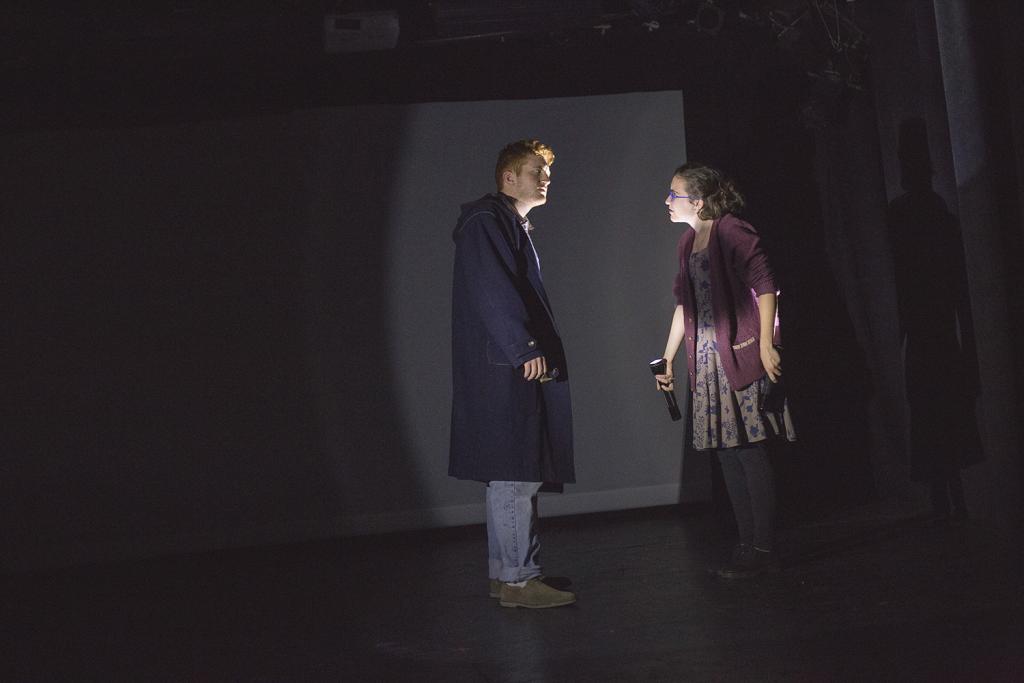 Weekend of Workshops offers a stage to directors, devisers and performers hoping to exercise and explore their craft. This Fall, directors choose moments which probe our relationship with danger. In The Fear, Guatama Mehta uses Robert Frost’s text to face the things that go bump in the night.  Lexi Turner imagines life in the wake of violent acts in Women on Trial. In Almondseed/Almondella Christian-Nicholas Castro Romero confronts the limits of ambition. Coriander Mayer’s The Candles examines the world of Moby Dick. Jackson Ruzzo ponders death, destiny, and the nature of humanity in Variations on the Death of Trotsky.

Shubhra Murarka (The Narrator) is a fourth-year in the College studying English Literature and Physics. She is playing The Narrator/The Fear and has previously acted in New Work Week and The Effect of Gamma Rays on Man-in-the-Moon Marigolds.

Chaucey Slagel (Woman) is third-year HIPS major, and very excited to be playing the Woman in The Fear. She has previously played Detective Maddox in The Future is Bright, Sour Patch in Em and the Kids, and the Chicken in Charlotte's Web. She hopes you enjoy the show!

Stephanie Slaven-Ruffing (Sound Designer) is a second-year Anthropology major. Her previous work with sound includes House of Cards, Suburbia, The Effect of Gamma Rays on Man-in-the-Moon Marigolds, and Citylights 2015: Apartment Complex. Other works with UT include Closer and Fifth Planet.

Jack Calder (Stage Manager) is a second year computer computer science/philosophy major. On the night of the last vernal equinox he descended deep beneath Rockefeller Chapel to perform a forbidden blood rite. His horrible incantations summoned an ancient eldritch abomination, who granted him unspeakable powers of stage management. He brings his unholy expertise to The Fear.

Adaptation of Antigone by Sophocles, The Winter's Tale by William Shakespeare, and The Scarlet Letter by Nathaniel Hawthorne
Written and directed by Lexi Turner

Lexi Turner (Director) is a third-year in the College studying Theater and Performance Studies and Classics. She has acted in multiple UT and Dean's Men Productions (including Hedda Gabler, Richard II, and Rumors), is a member of the UT committee, and is an ensemble and board member of UChicago Commedia. This is her directorial debut.

Emma Maltby (Hermione) is a second-year potential TAPS and English double major. With UT, she has performed in Suburbia (Bee-Bee), Rumors (Chris Gorman), Macbeth (Lady Macduff), and a workshop of Selections from Angels in America (Harper Pitt) as well as several Theater [24] festivals. She currently serves as a member of UT's Student Committee.

Alanna DePinto (Hester Prynne) is a second-year English and Cinema double major. She last performed with UT in New Work Weeks in the spring of 2015.

Sarah Saltiel (Antigone) is a prospective English and Visual Arts double major first-year. She did theater all throughout high school.

Abigail Adams (Stage Manager) is a student in the College.

Ethan Metzger (Almondseed) first-year in the College, major undecided. His previous credits include John Proctor in Arthur Miller's The Crucible in high school.

Claire DuCanto (Sybil/Henrietta) is a second-year pre-med majoring in film studies/visual arts. She was last seen on stage with UT as Officer Pudney in Rumors (2015), and would like to thank stage management for all their hard work!

Tempest Wisdom (Eileen) is a second-year TAPS major. This is her second show with UT. Previously, she has been in the Dean's Men production of Love's Labour's Lost. She is also a member of UC Commedia.

Will Darling (Edwin) is a first- year in the college.

Coriander Mayer (Director), is a second-year TAPS and English major in the College. After two and a half years of reading and re-reading Moby-Dick and Melville's work in general, Cori could not be more pleased to bring the intensity that is The Candles to the stage. This is her first time directing for UT, though she's designed (lights, asst. set), acted, and electrician'd previously.

Ruben Lesnick (Ahab) is a fourth-year Bio major. Previous roles with UT include Dumaine (Love’s Labour’s Lost), Louis Ironson (Selections from Angels in America: Millennium Approaches), and Silvius (As You Like It). Ruben has also been involved in recent productions with Skokie Theater, Gorilla Tango Theater, City Lit Theater, and the Classical Entertainment Society.

Neal Jochmann (Starbuck) is a third-year student of Computer Science and East Asian Languages and Civilizations. He was in a musical workshop last fall and has since appeared in Amadeus (Winter 2015) and Love's Labors Lost (Spring 2015). He is also a tenor II in Motet Choir, UChicago's top undergraduate renaissance music choir.

Sofia Johnson (Stubb)  is a fourth-year in the College, majoring in Comparative Human Development. Previous UT credits include Cowboy Mouth (Costume Designer), A Midsummer Night's Dream (ACD), and The Drowsy Chaperone (ACD). Other theater credits include Blood Weddin' (Ma) and Pygmalion and Galatea (Cynisca) for CES, and Mowgli's Adventures (Costume Designer) for Le Vorris & Vox. She is also a veteran member of Attori Senza Paura, and has performed in seven of their productions.

Maya Jain (Flask) is a first-year in the College and plans to be a Theatre and Performance Studies and Gender and Sexuality Studies major. This is her first show with UT, but some of her past credits include Medea (Medea), The Third Witch (Macbeth), and she co-directed and stage managed her high school production of Peter Pan. She also worked with Silicon Valley Shakespeare as a tech intern in 2014.

Jackson Ruzzo (Director) is a student in the College.

Alex Morales (Trotsky) is a student in the College.

Grace Bolander (Mrs. Trotsky) is a second-year TAPS major in the College. This is her second production with UT, following her performance as Lady Macbeth in Macbeth last fall. She's happy to be back, and hopes you enjoy the show(s)!

Lukas Gondek (Ramon) is a first year in the College. Media, Actor in Grimm Tales, Argonautika, Co-Director of The Willow Pattern.

Molly Becker (Production Manager) is a third-year in the College. She has previously worked as the Assistant Production Manager on University Theater productions of Cabaret, Closer and The Effect of Gamma Rays on Man-in-the-Moon Marigolds.

Eric Kirkes (Assistant Production Manager) is a third-year Music major. He spends all his time with UT as a Committee Member, and has worked on Godspell, A Little Star Quality, Closer, and Scenes from Rabbit Hole.

Alex Hearn (UT Committee Liaison) is a third-year studying Public Policy and TAPS. He mostly acts but sometimes directs, and will be playing Officer Lockstock later this quarter in Urinetown. He is the Secretary of UT Committee.