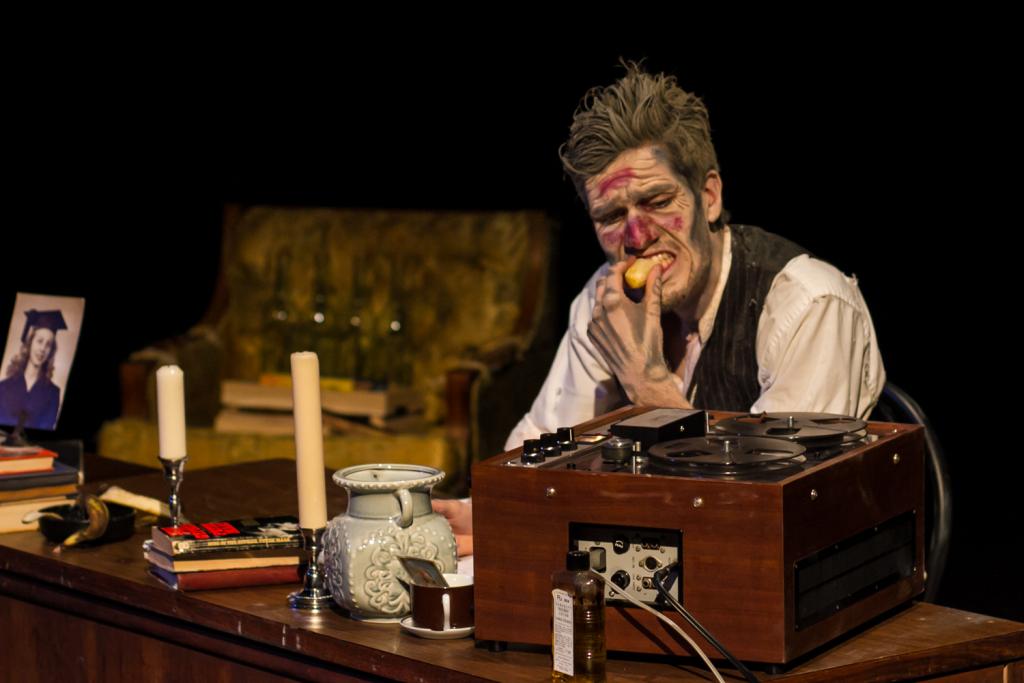 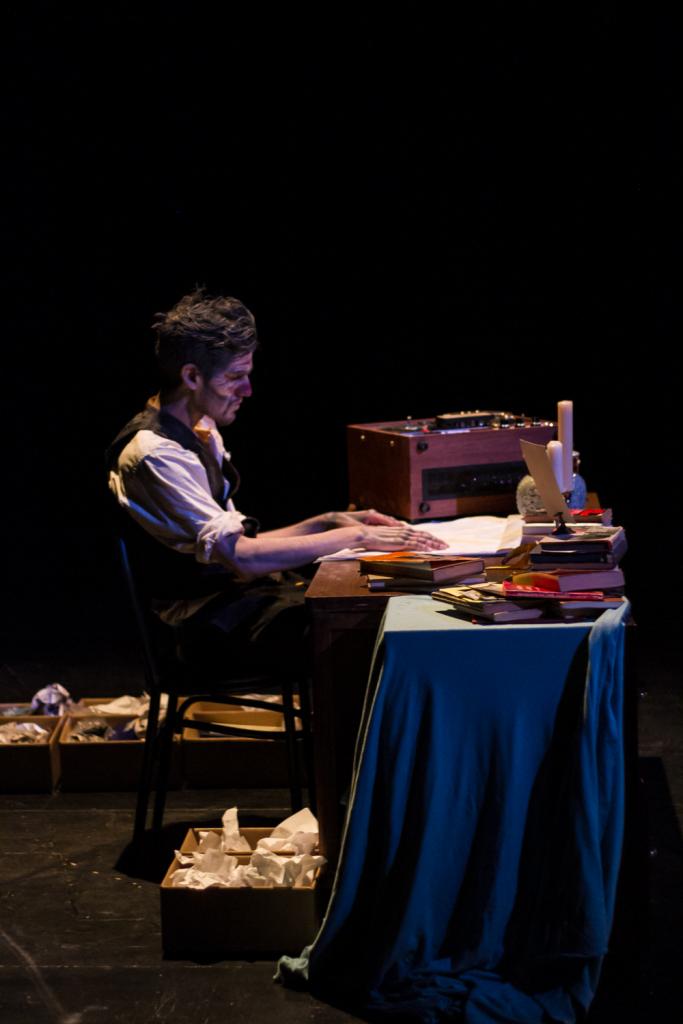 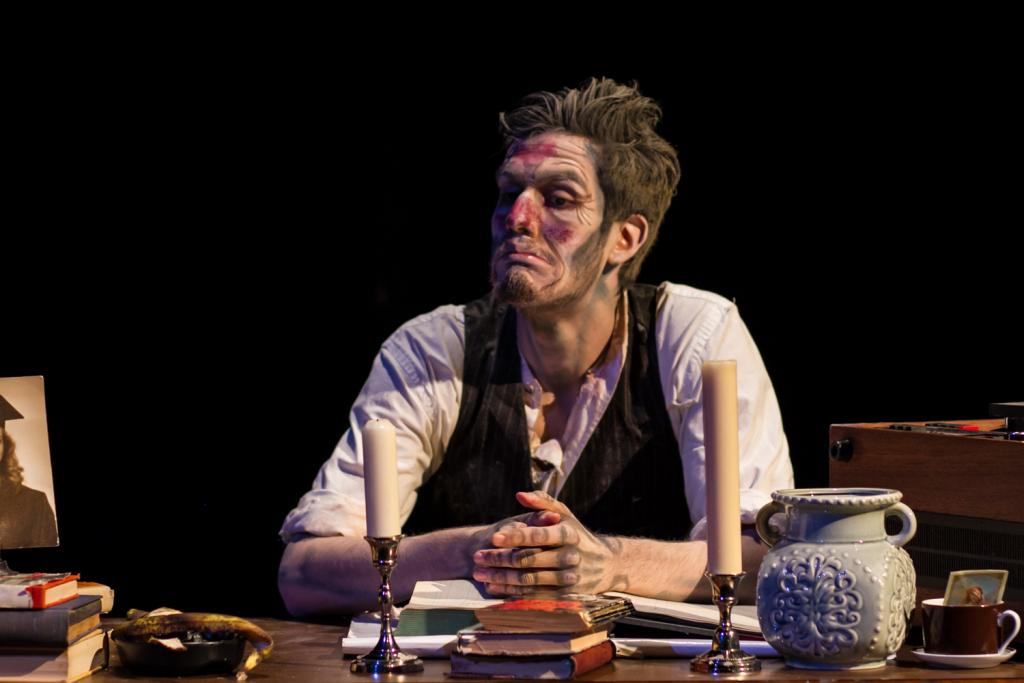 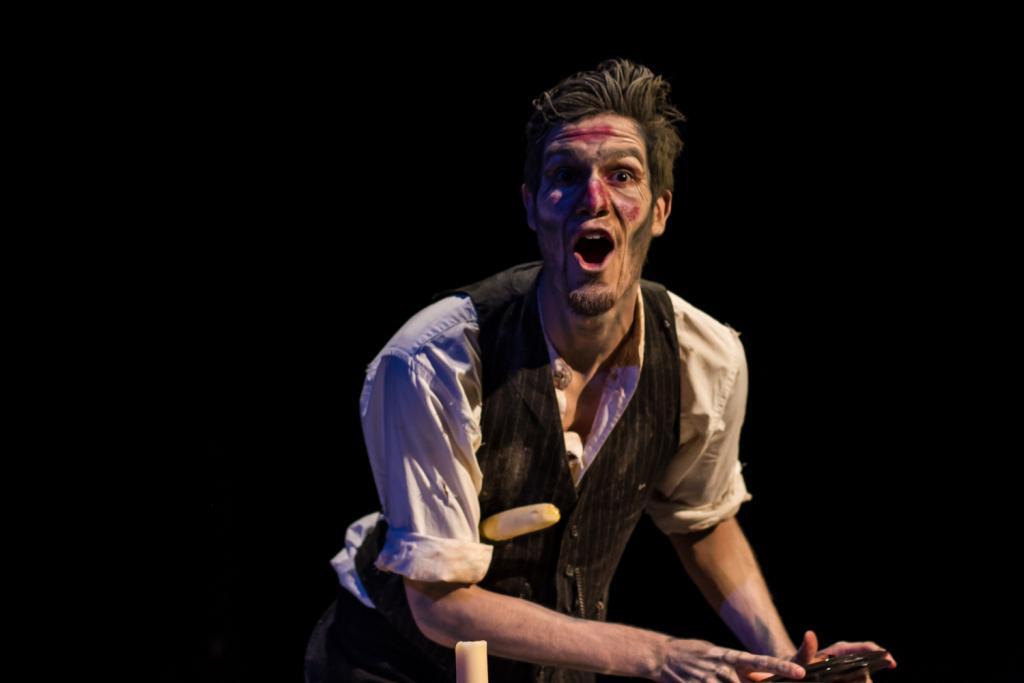 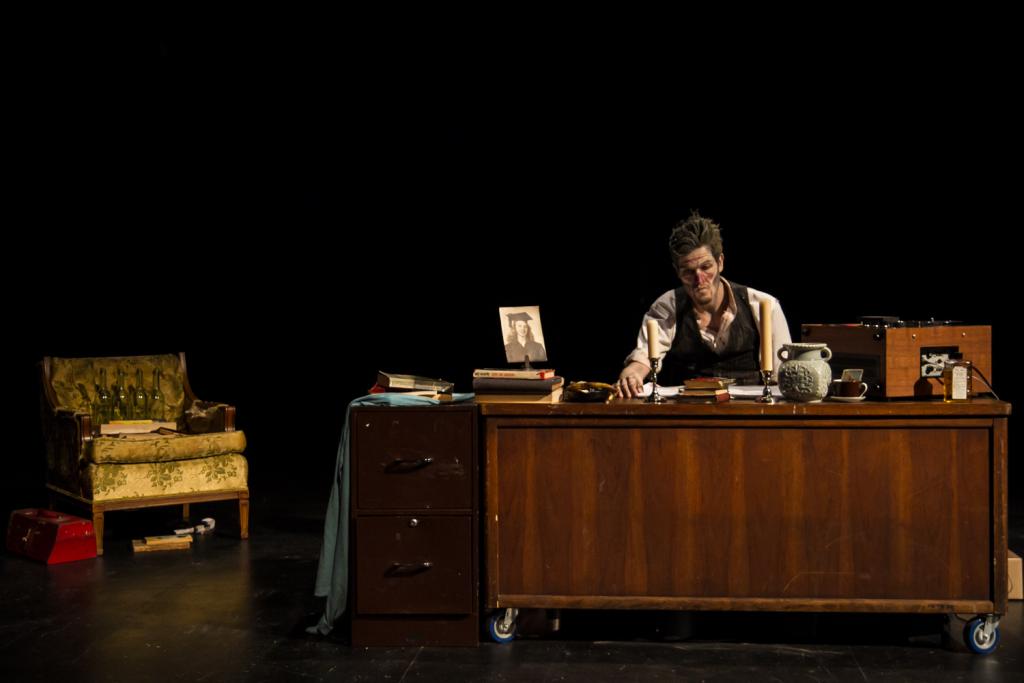 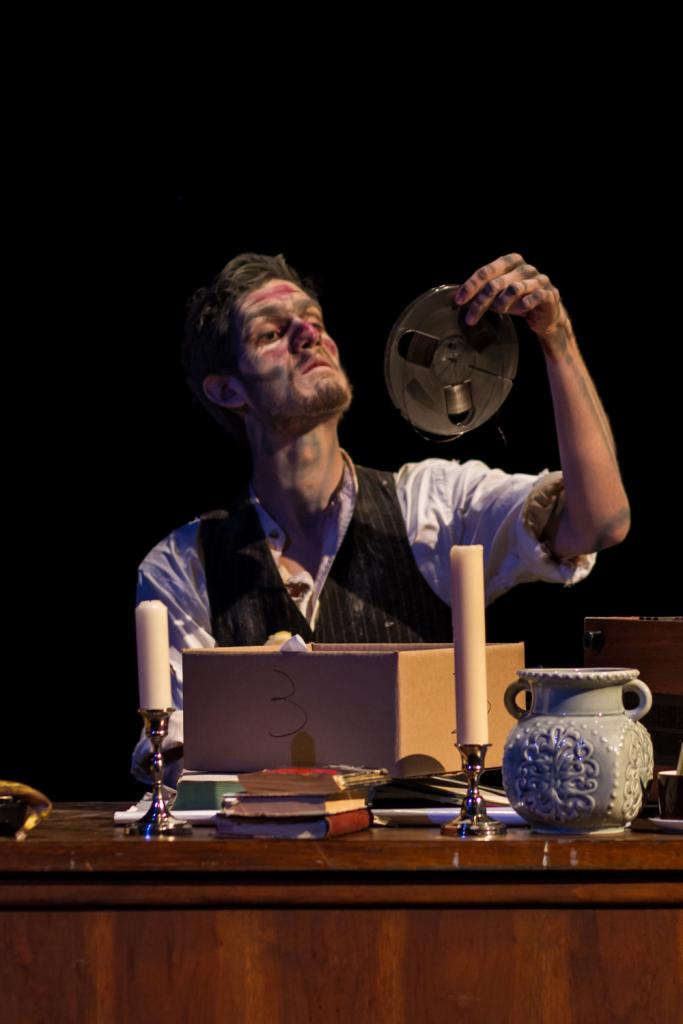 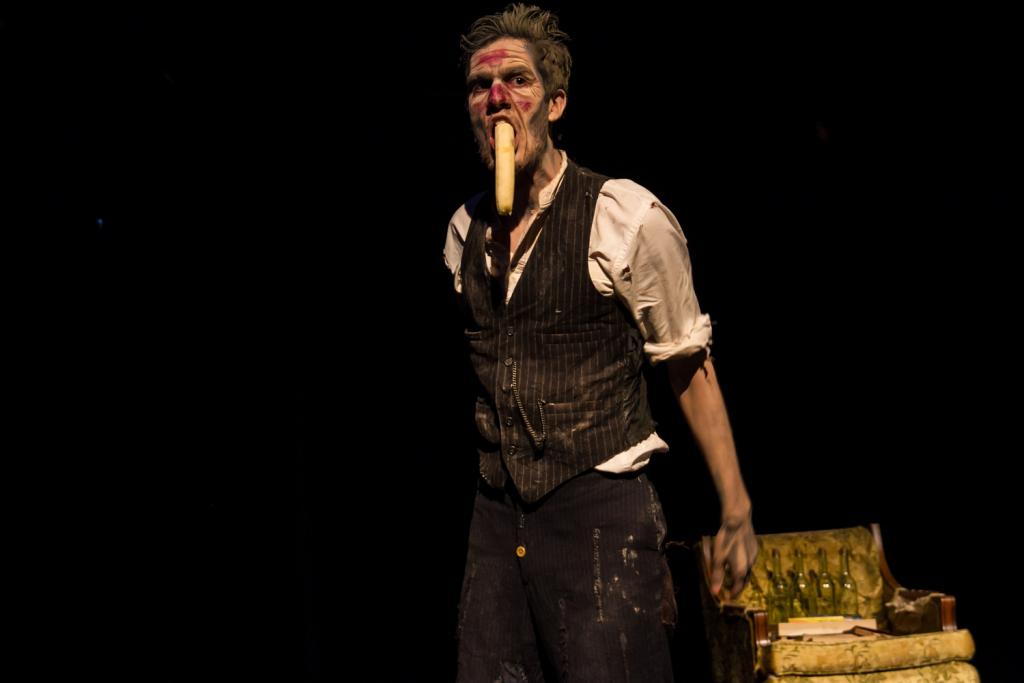 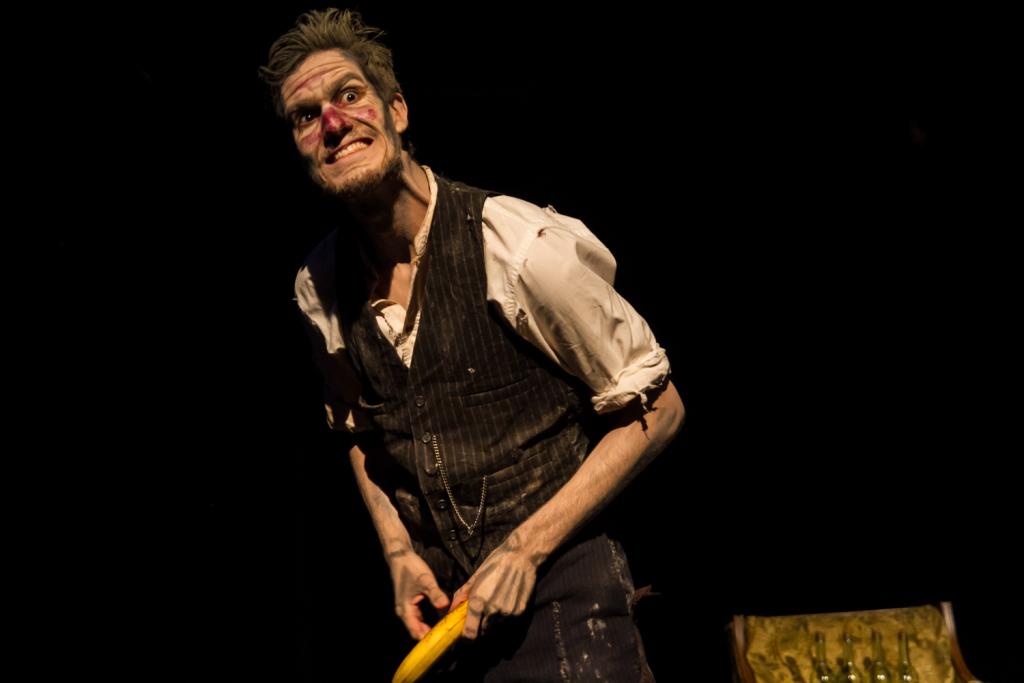 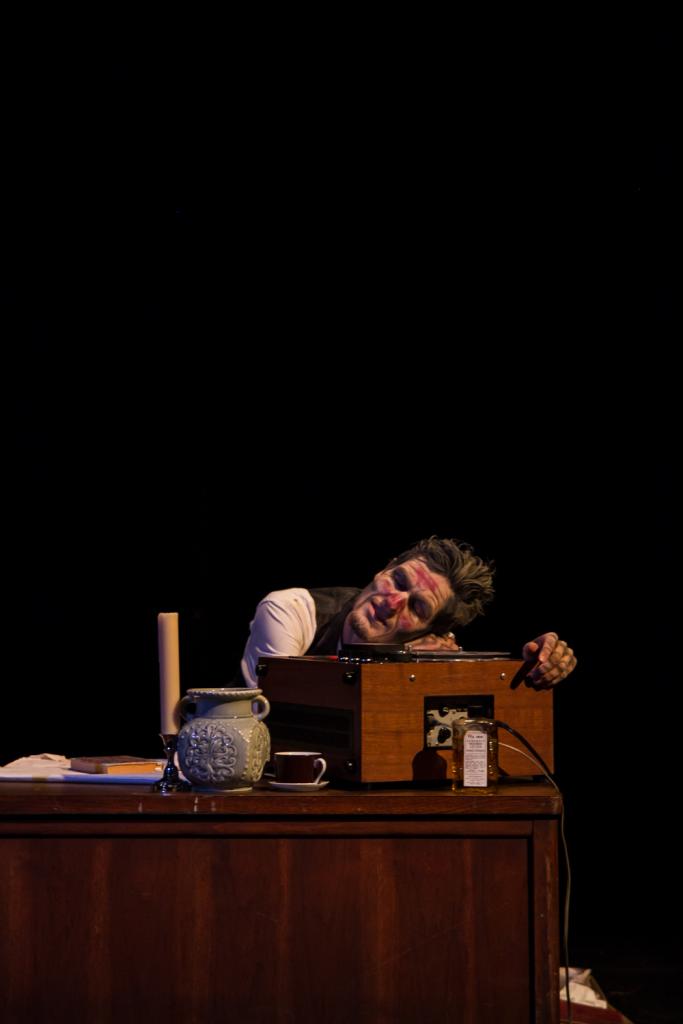 Birthdays are an ideal moment to look back on the past and ruminate on what went wrong. On his 69th birthday, an aging and so far unsuccessful writer indulges in an annual ritual of reflection in Samuel Beckett’s Krapp’s Last Tape, directed by Jonathan Sorce. But in confronting his former selves, he must also confront his past full of missed opportunities for happiness, traded for the sake of his work. When the best days of life have already passed and the sum of all those years is nothing more than regret, from bananas to red wine— it all tastes like loneliness.

Atticus Ballesteros (Krapp) is a third-year Comparative Human Development student, hailing originally from The Good Land in Wisconsin. Since the fall quarter of his first year, Atticus has been heavily involved in a number of campus productions by both University Theater and Fire Escape Films. He is extremely grateful for the opportunity to play a very sad man, and also for the excuse to eat multiple bananas a day.

Jonathan Sorce (Director) is a third-year Math major in the College. He has previously worked extensively with the Dean's Men, acting in As You Like It and Much Ado About Nothing, serving as assistant director for A Midsummer Night's Dream, and directing Henry V.

Si Squires-Kasten (Dramaturg) is a second-year English major. This is his fourth show with University Theater. You can catch him as an actor in House of Cards or the Classical Entertainment Society's Medea later in the quarter, or you can just say hello if you see him around campus, as he's quiet but will really open up the more you get to know him.

Kevin Freese (Lighting Designer) is a fourth-year in the College, majoring in Mathematics and Computer Science. This is his 18th show at UChicago, and his sixth lighting design. Previous credits include Henry V, A Midsummer Night's Dream, and Fifth Planet.

Melissa Needleman (Scenic/ Props Design) is a third-year in the College majoring in Comparative Human Development. Previously, she has acted in UT’s production of Amadeus and performed as an ensemble member with the 28th generation of Off Off Campus.

Rob Geada (Sound Design) is a third-year Astrophysics major in the College. He has previous experience in both sound design and acting, designing Henry V, and playing Claudio in Much Ado About Nothing.

Alex Hearn (Clown Coach) is a third-year studying Public Policy and TAPS. He has previously acted in Suburbia (Jeff) and as Pulcinella in UofC Commedia. He is the secretary of UT Committee.

Mariel Shlomchik (Production Manager) is a third-year in the College studying Biology (with a major passion in theater). Krapp's Last Tape is her eighth show with University Theater. In the last year she has production managed Love's Labour's Lost and Cowboy Mouth, and stage managed Henry V.

Ariela Subar (Stage Manager) is a third-year student in the College, majoring in Theater & Performance Studies and English. Previous stage management credits include This is How it Goes, Amadeus, Macbeth (1st Assistant Stage Manager), "A Little Star Quality" within A Weekend of Workshops, as well as CESfest’s croMagnum (Assistant Stage Manager). She has also served as the Assistant Stage Manager for First Floor Theater's Kafkapalooza and upcoming production of Animals Commit Suicide. Ariela currently serves as the Student Staff Photographer for TAPS.

Tiffany (Tippo) Wang (Tech Staff Liaison) is a third-year Psychology major. She's worked with UT/TAPS in various capacities, this time as a tech staff liaison! She can usually be found in the shop working on builds for shows as Master Carpenter, or huddled in front of a light board as a lighting designer, or climbing scary ladders as a Master Electrician. Fun stuff, stay tuned!