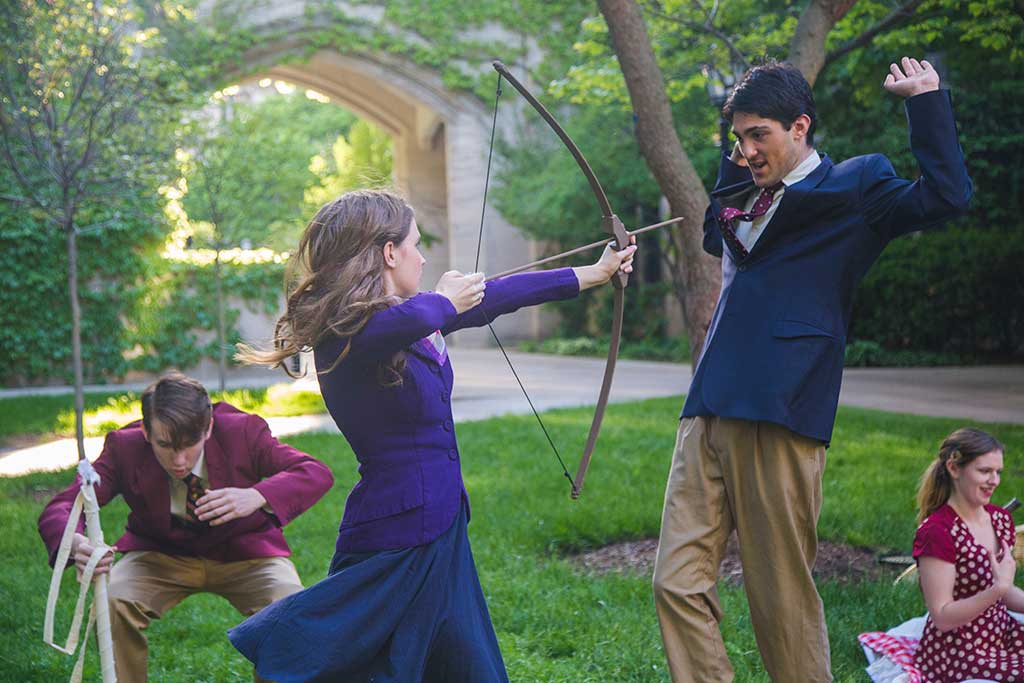 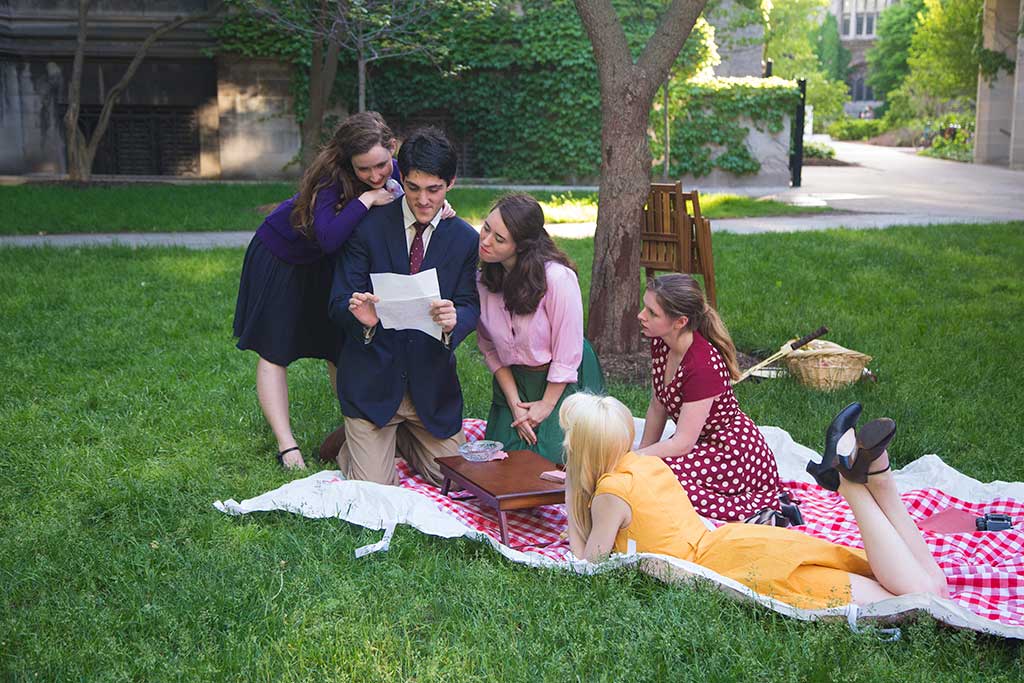 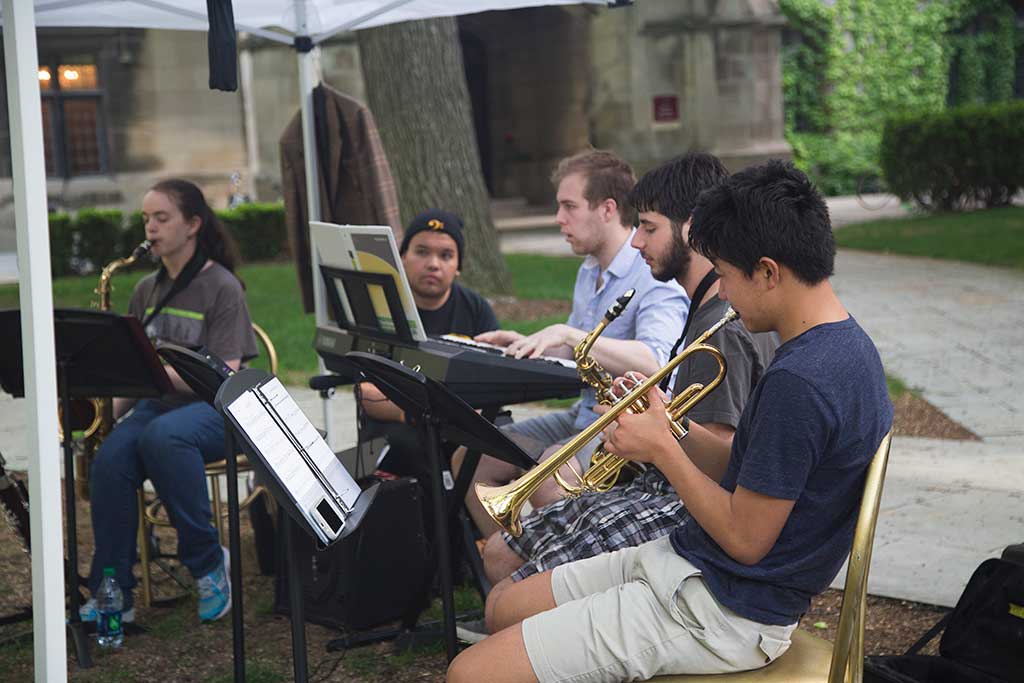 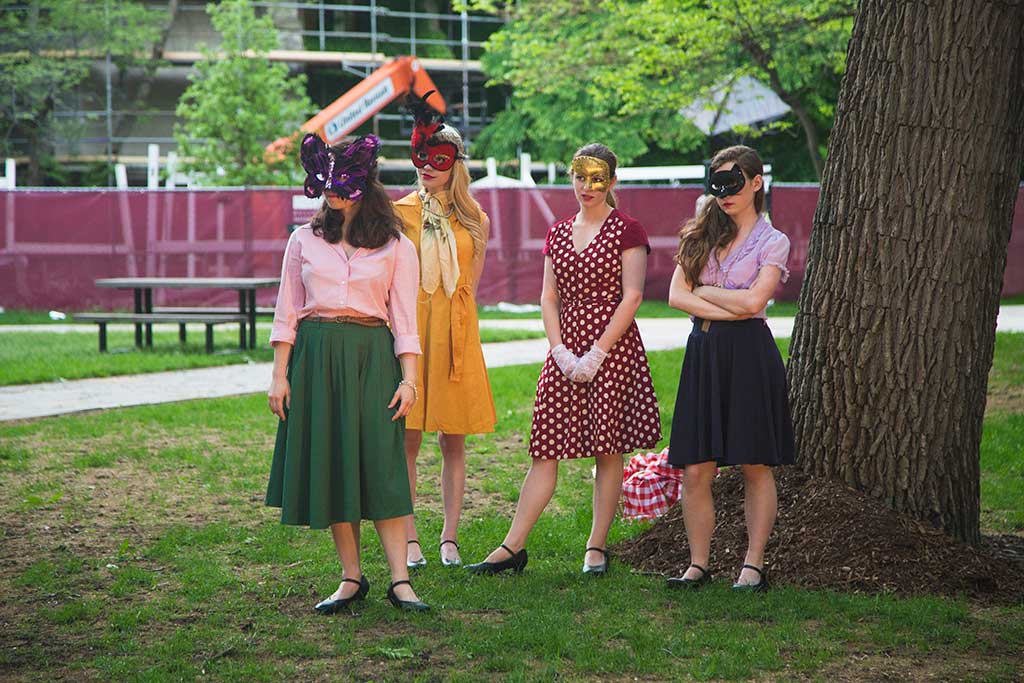 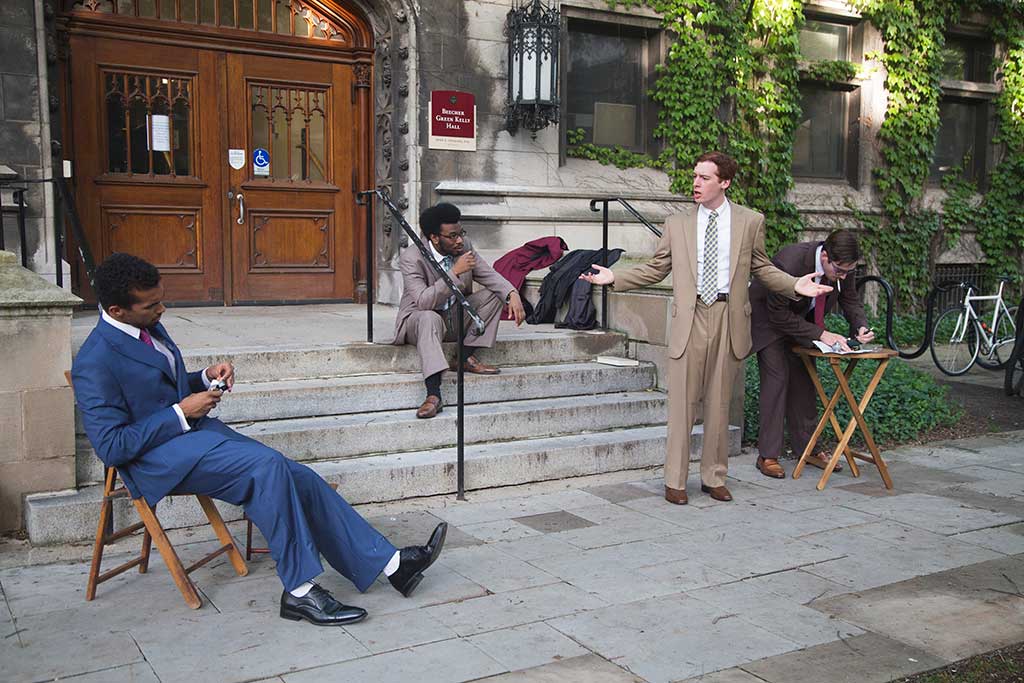 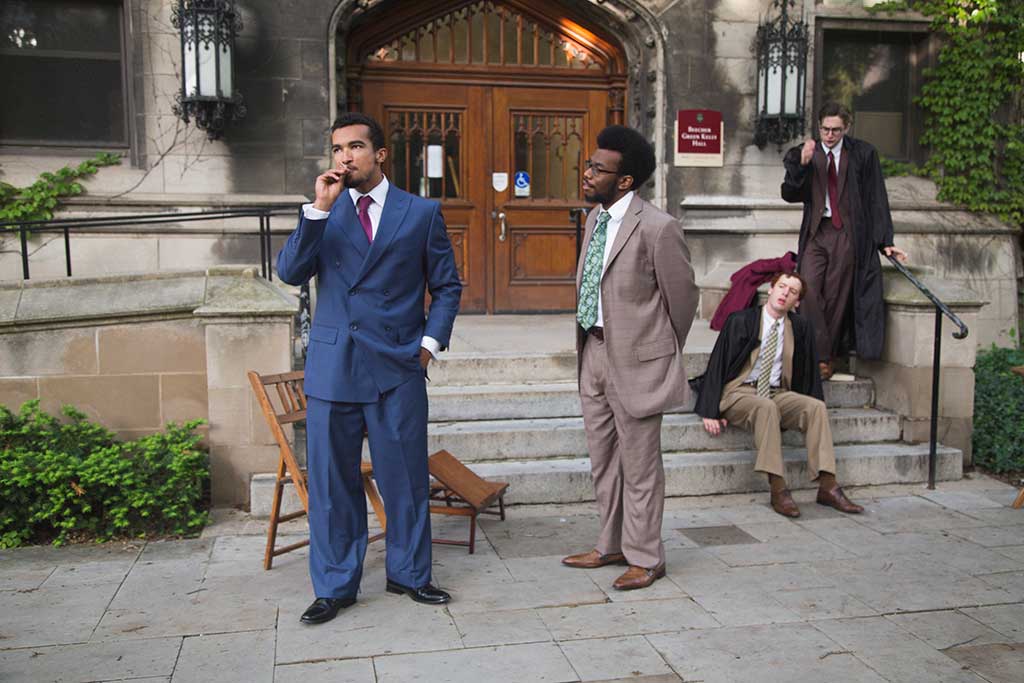 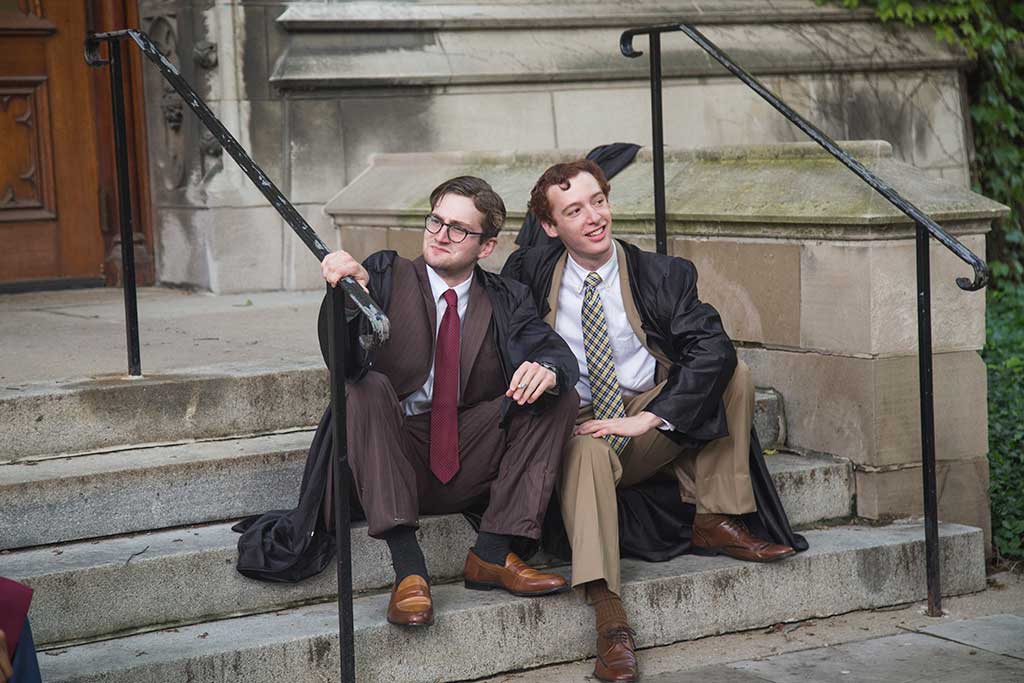 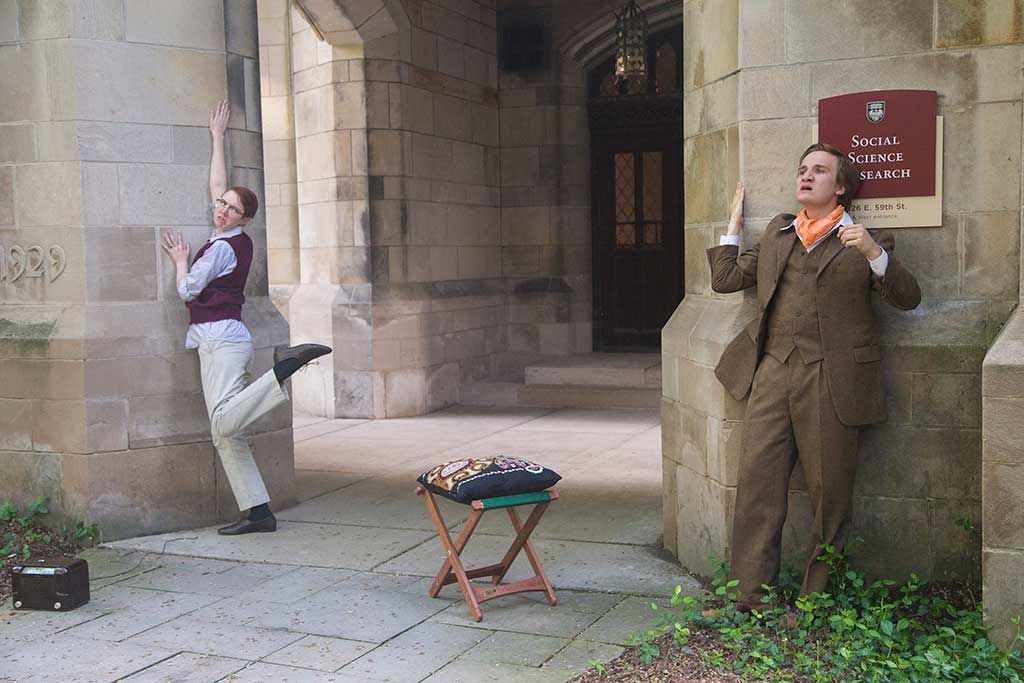 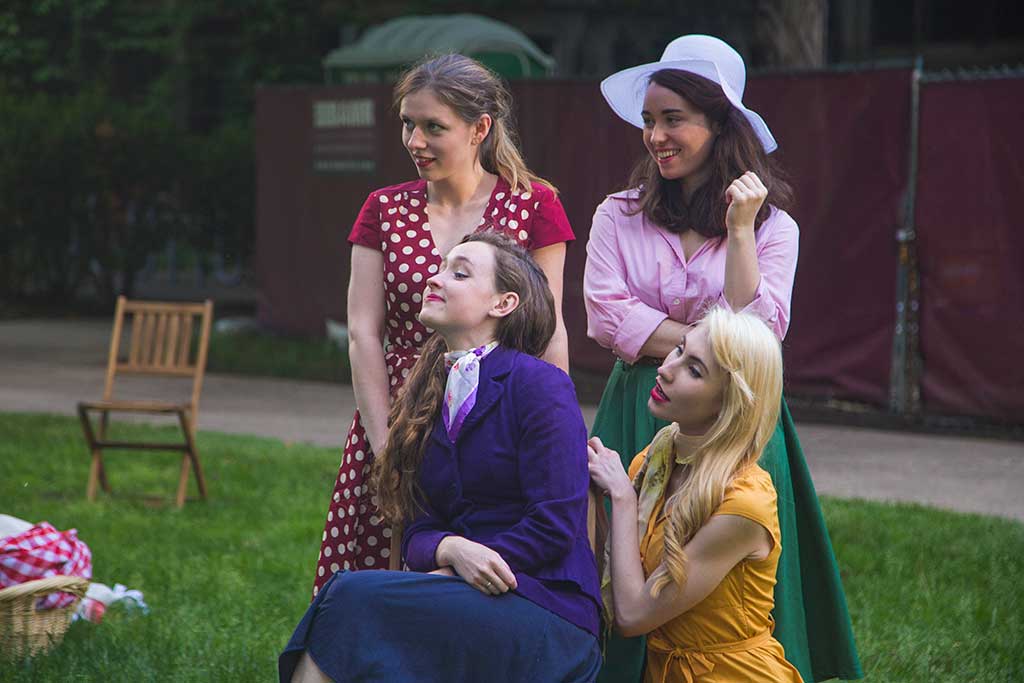 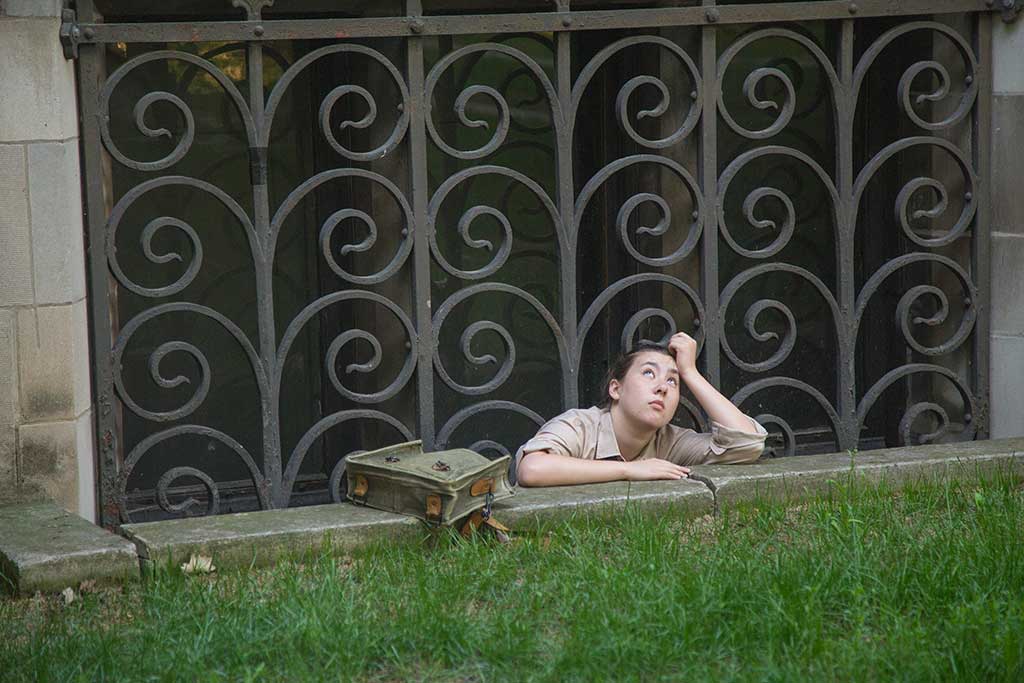 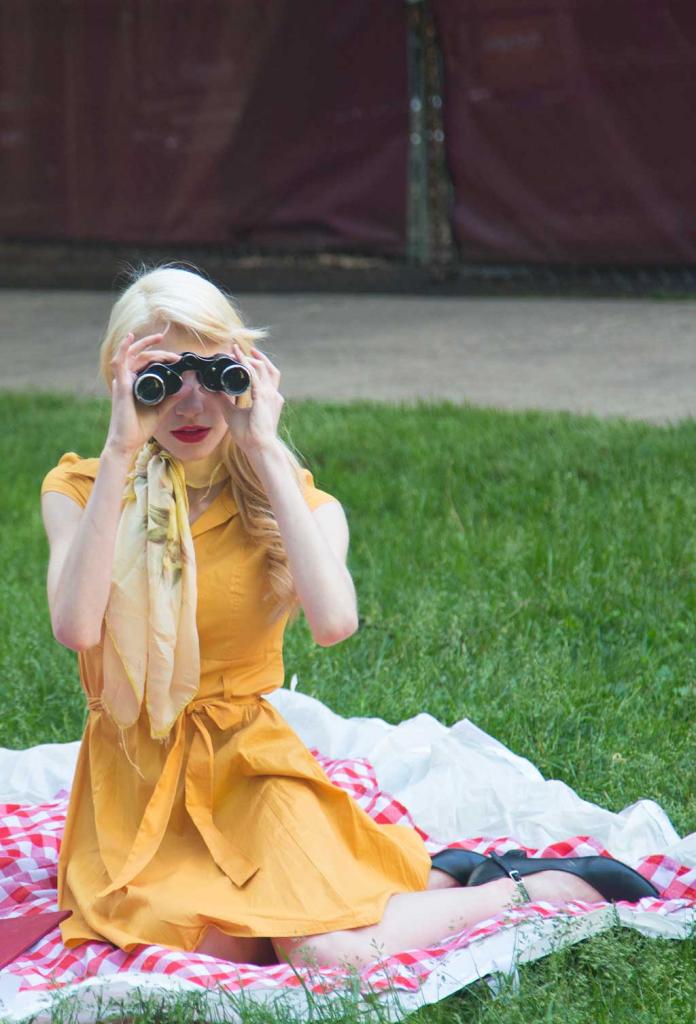 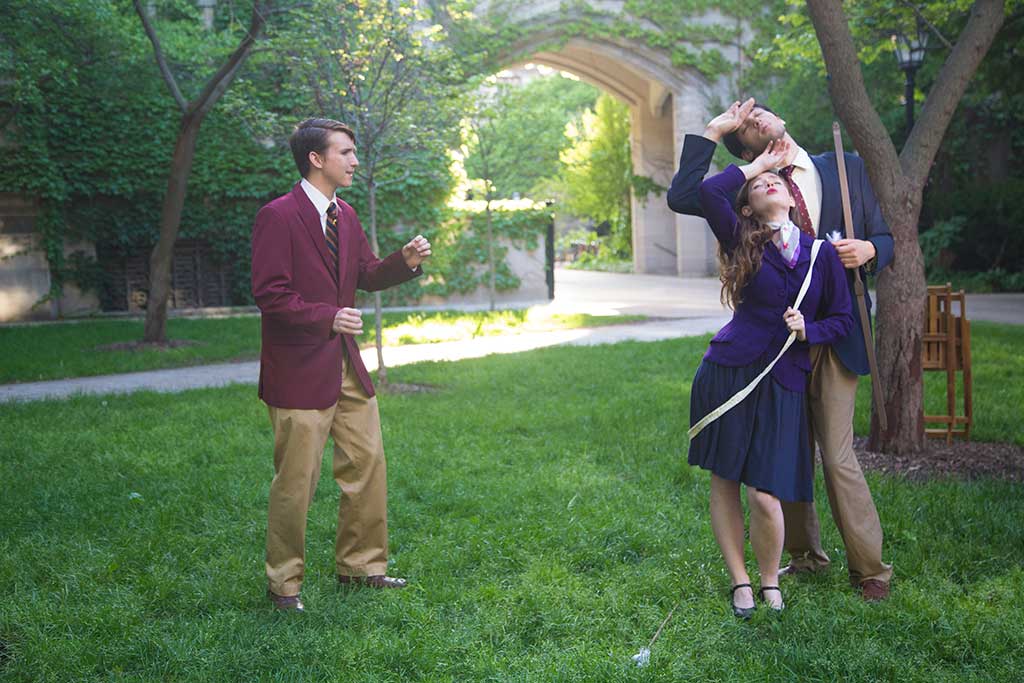 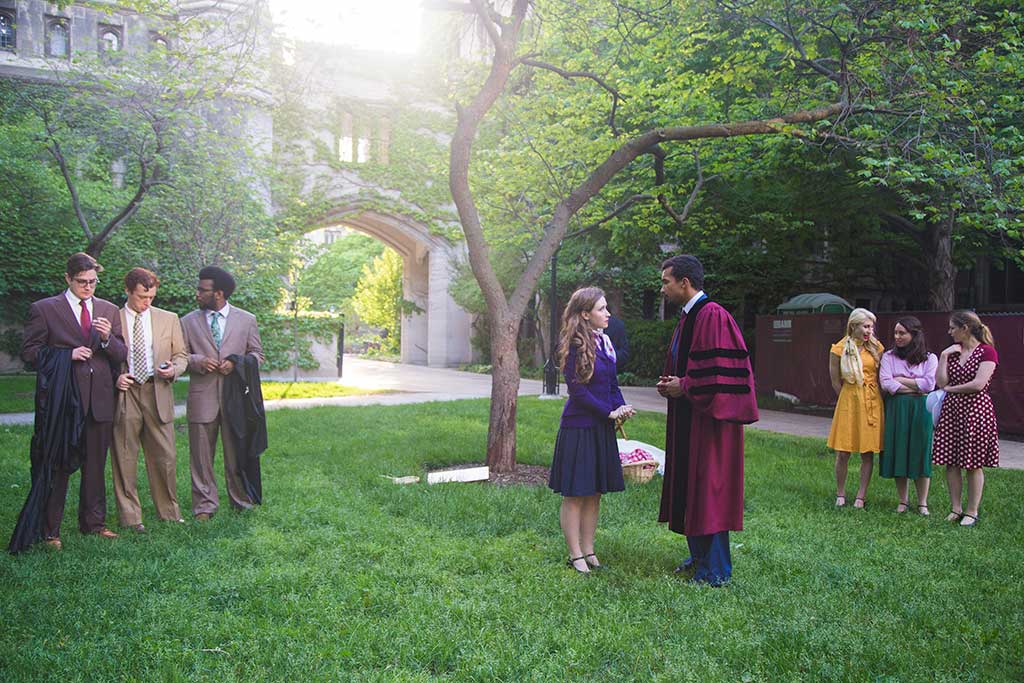 The head and the heart aren’t too far apart in Love’s Labour’s Lost, written by William Shakespeare and directed by Maria Decker. Tangled up in the ivy league of the 1940s, four young scholars must choose between their ivory tower and the wits of four brilliant coeds. Together they employ pranks and poetry in pursuit of love, challenging an over-serious academy with humor and youth. As graduation looms, the students must decide what moments they’ll cherish and what follies they’ll leave behind.

Sam Audette (Longaville) is a second-year majoring in Law, Letters, Society. This year he has also acted in Amadeus and Frankenstein.

Eleanor Clifford (Maria) is a third-year HIPS major in the College. With University Theater, she previously appeared in Hedda Gabler (Hedda), Henry VI (Rutland), Winter 2012 Workshops, and The Real Thing (Annie), as well as having directed Fifth Planet and First Love. She is the Interim Education Chair for the Dean's Men Board and also performs with Le Vorris and Vox Circus.

Alexander Eichner (Holofernes and Choreographer) is a second-year in the college tentatively double-majoring in History and Math. Previous show credits include As You Like It, Thrill Me, A Crackup at the Race Riots, Henry V, and Amadeus.

Hanna Gregor (Costard) As a first-year Ecomics major from Hong Kong, this is her first Dean's Men production and her American debut. Previous show credits include Florence Unger in The Odd Couple and Mrs Smith in The Bald Soprano. She is a cast member of Occam's Razor and a dancer of Chicago Raas.

Ruben Lesnick (Dumaine)​ is a third--year Biology major, and as such he fully endorses the practice of studying and forsaking all worldly pleasures for three years. Previous roles include Louis Ironson (Selections from Angels in America: Millennium Approaches), Silvius (As You Like It), and several roles in productions by the Classical Entertainment Society.

Jakob Solheim (Anthony Dull, Mercade) is a first-year Economics and Public Policy major. This is his first Dean's Men show, although he has previously performed in CES's Life of Galileo (Galileo) and UT's Amadeus (Majordomo, Cook, Priest).

Amelia Soth (Rosaline) is a second-year Near Eastern Languages and Civilizations major. This is her first UT production.

Si Squires-Kasten (Boyet, Nathaniel) is a first-year English and Public Policy major. This is his third University Theater show, and his second with the Dean's Men.

Maggie Strahan (Jaquenetta) is a first-year TAPS major. Recent shows include Amadeus (Teresa) and Talk To Me Like the Rain and Let Me Listen (Woman).

Peyton Walker (Katharine) ​is a first year Visual Arts and/or Art History Major. Other UT experiences include Katherina Cavalieri in Amadeus and Kate in What a Wild Party.

Elise Wander (Princess of France)​is a fourth-year English and Gender Studies major. She entered UT in her first year with Cymbeline, also an outdoor Dean's Men show, and is grateful to come full circle with Love's Labour's Lost. She has been honored to be a part of the Dean's Men and UT community.

Tempest Wisdom (Moth) is so grateful for the opportunity to be in a Shakespeare show after so long! The last time was in the 8th grade, so it's about time to get back to the Bard! She is a first year TAPS major and this is her first show with UT. She is also a member of Attori Senza Paura, UChicago's Commedia dell'Arte troupe.

Chase Woods (Ferdinand) is a second-year student in the College majoring in Public Policy and considering a minor in Theatre and Performance Studies. This is his third production with UT, his second with the Dean's Men.

Maria Decker (Director) is a fourth-year Mathematics major and Polish Studies minor.  This is her tenth and last UT production--her fourth with the Dean's Men--and she couldn't be more thankful for all that this wonderful community has given her over the past four years.  Her previous credits include Cowboy Mouth (Stage Manager), Closer (Lighting Designer), A Midsummer Night's Dream (Props Designer), the 2014 Winter Workshop Sure Thing (Director), and As You Like It (Stage Manager) among many others.

Bennett Foley (Stage Manager) is a first- year Computer Science major who has worked on several shows, including  working as SM on three productions during high school, as ALD on Macbeth and as ASM on Fifth Planet.

Dan Lastres (Sound Designer) is a first-year English major and Music minor. This is his second show with the Dean’s Men, he worked as an assistant set designer last quarter on Richard II, and he is a performing member of Occam’s Razor.

Colin Garon (Props and Scenic Designer) is a first-year who has previously co-props designed for Amadeus and Endgame.

Jack Phillips (Costume Designer) is a fourth-year Biology major. He costume designed The Clean House, As You Like It, and Henry VI, set designed This is Our Youth, assisted costumes on Much Ado About Nothing and Cymbeline, and assisted in other capacities on Twelfth Night, Henry IV, Part 1, and The Violet Hour.

Michaela Voit (Dean's Men Liaison) is a second-year English and Public Policy major. Having acted previously in four Dean's Men shows, she currently serves as the Art Chair on the Dean’s Men Board and the Dean's Men Representative to UT Committee.

Miles Richardson (Music Director) is a second-year majoring in Biology and Music.

Brandon McCallister (Assistant Director) is a first-year in the College majoring in Biology. This is Brandon's third show with the Dean's Men. He has previously assistant stage managed for both Henry V and Richard II.

Emily Cambias (Assistant Props Master) is a first-year in the College majoring in History. This is her second show with University Theater, and her first foray into prop design. She was Lighting Assistant for the play Cowboy Mouth this past winter quarter.

Vivian Zhang (Assistant Set Designer) is a first-year prospective Economics major, Previously, she was also an assistant set designer for Closer by Patrick Marber this past fall quarter.

Daniel Heins (Lighting Designer)​is proud to be a Dean's Man, this being his third Dean's Men show. He has worked lights and set in assorted capacities for numerous shows among assorted groups.

Jenny Haar (Tenor Sax and Bassoon) ​is a first--year tentatively majoring in Computer Science with a minor in Music. She is involved with the University Chamber Orchestra, Early Music Ensemble, and Pep Band, playing various woodwinds. She has never been in a play before, but she has done a number of pit orchestras for musicals; favorite shows include Shrek: the Musical, Seussical: the Musical, and Once Upon a Mattress.

Rachel Taub (Double Bass) ​is a first-year Classics major. She is a member of the University Chamber Orchestra. Recent pit orchestras she’s performed in include The Yeomen of the Guard, How to Succeed in Business Without Really Trying, and Carousel.

Aaron Bao (Trumpet)​ is a second-year Math and Philosophy major involved in the UChicago jazz X-tet. Other than a fifth grade school play where, as Remus in the Roman founding myth, his only role was to be killed by a rock, this is his first theater experience.

Josh Turner (Alto Saxophone) ​is a first--year (most likely) Physics and Math major with a minor in Music. He is in the University Jazz X-Tet, playing sax, and is involved with the CJEP playing both sax and piano. He has played in a pit orchestra once before for a high school production of Footloose (and really what other experience do you need).