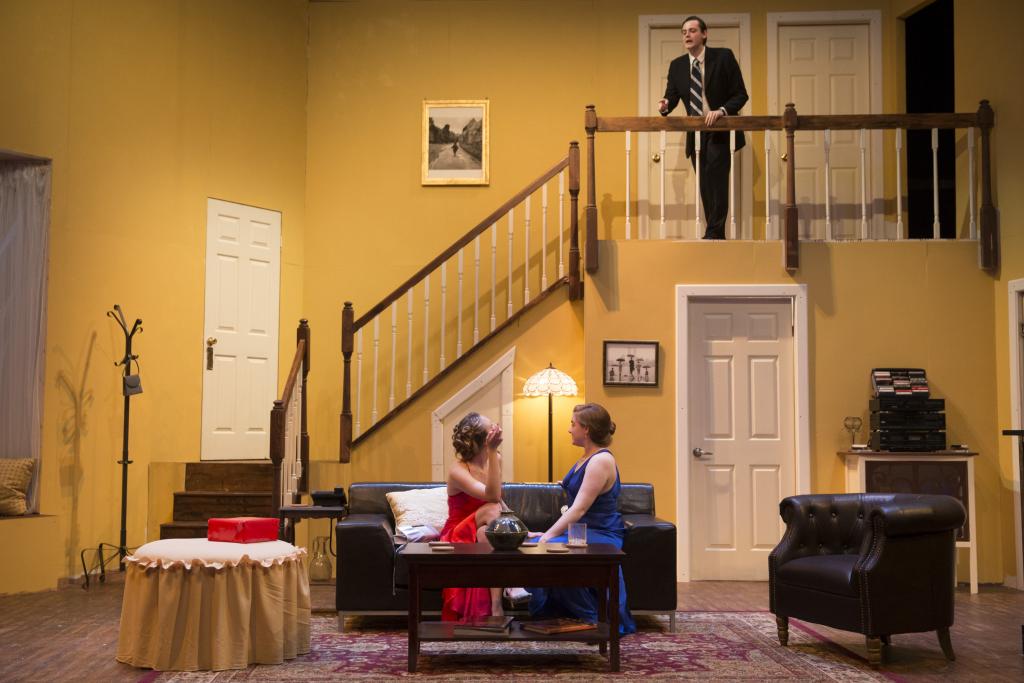 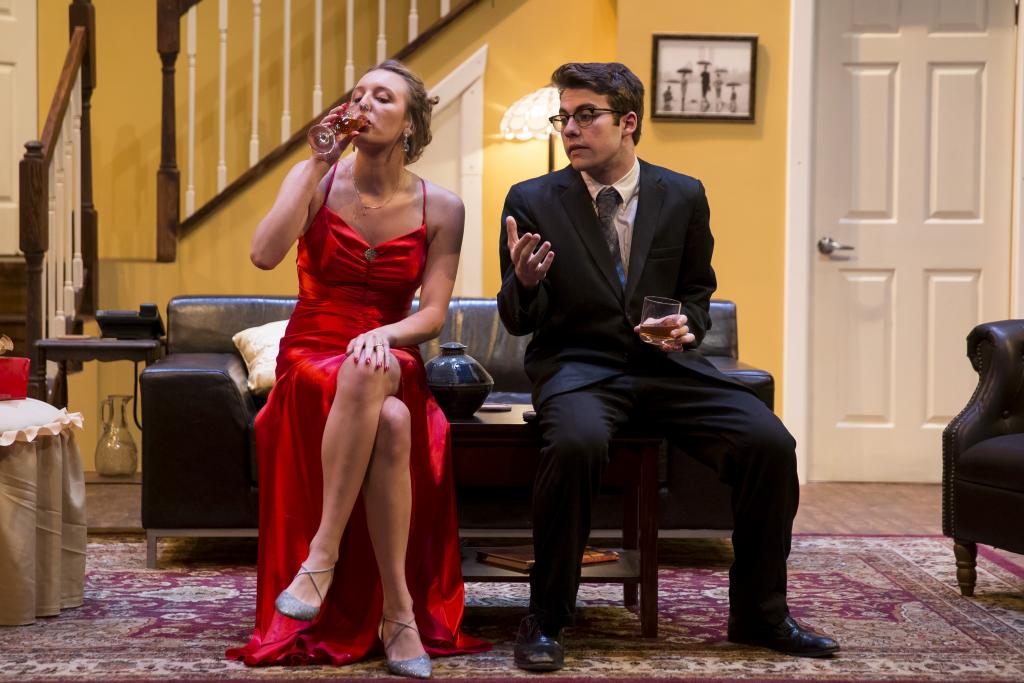 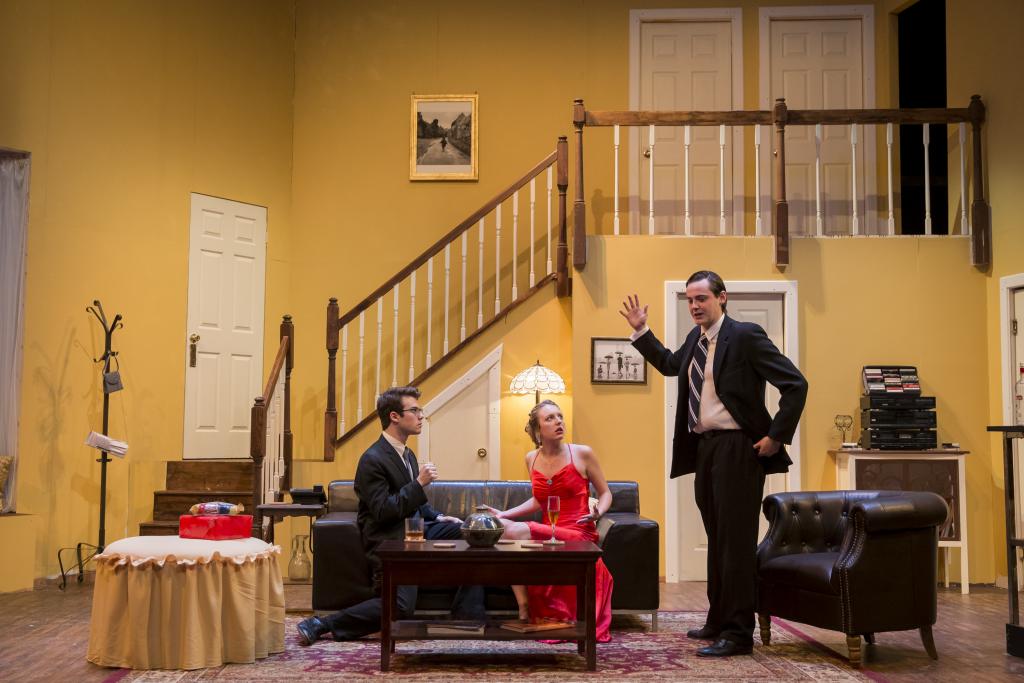 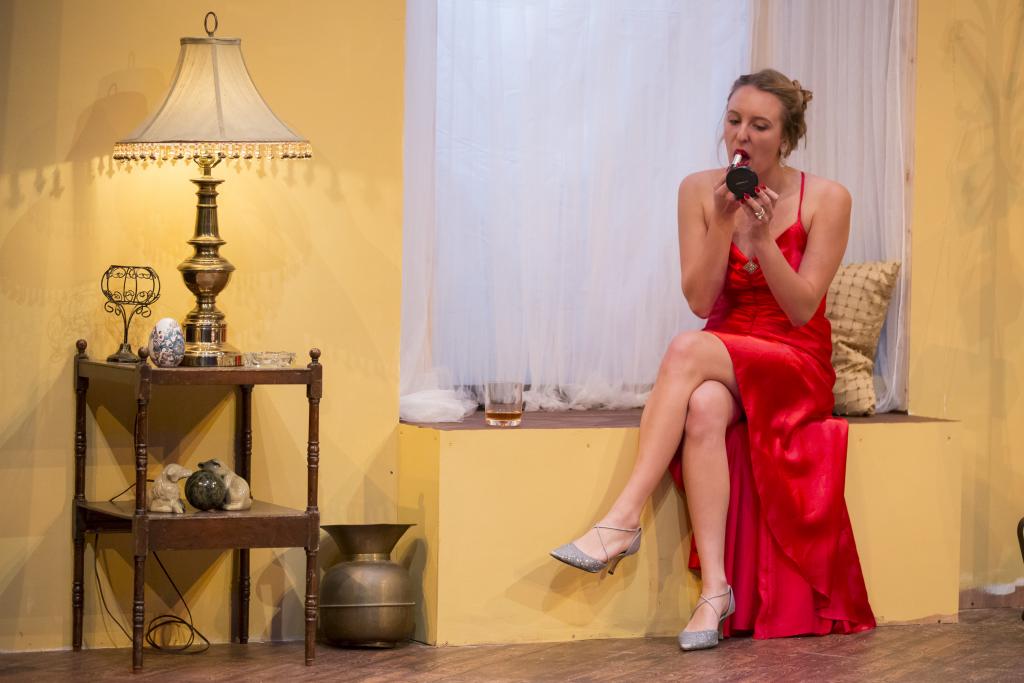 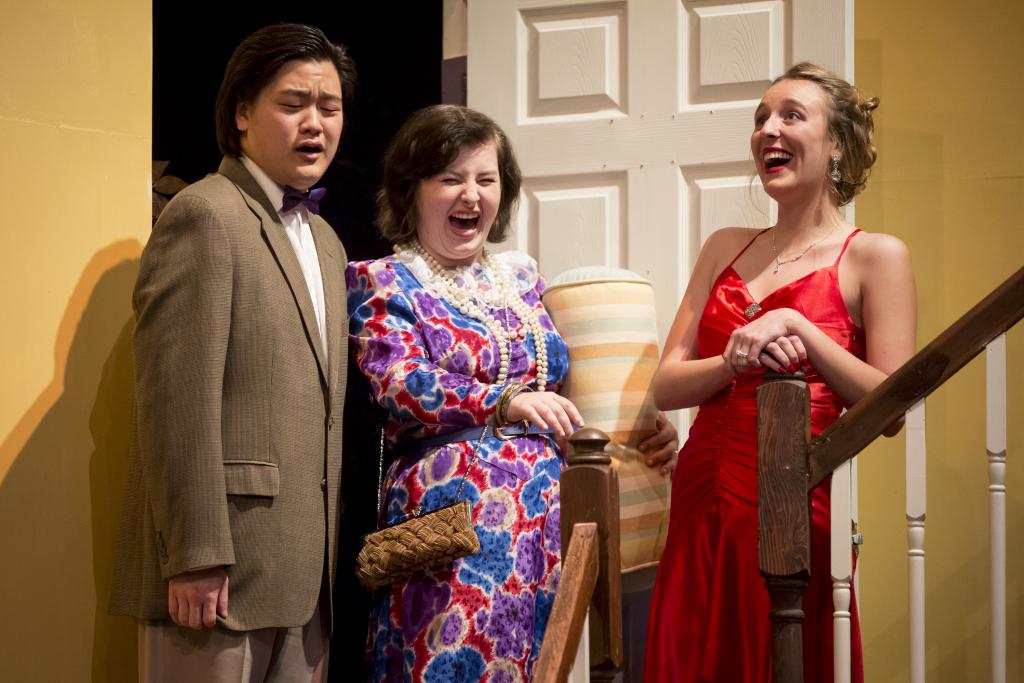 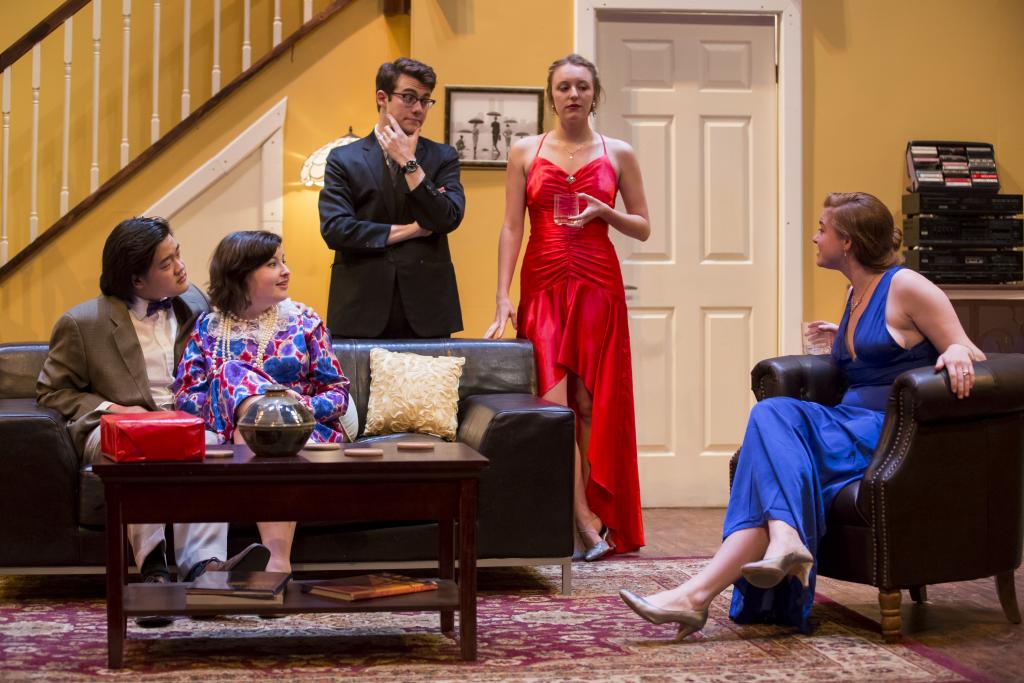 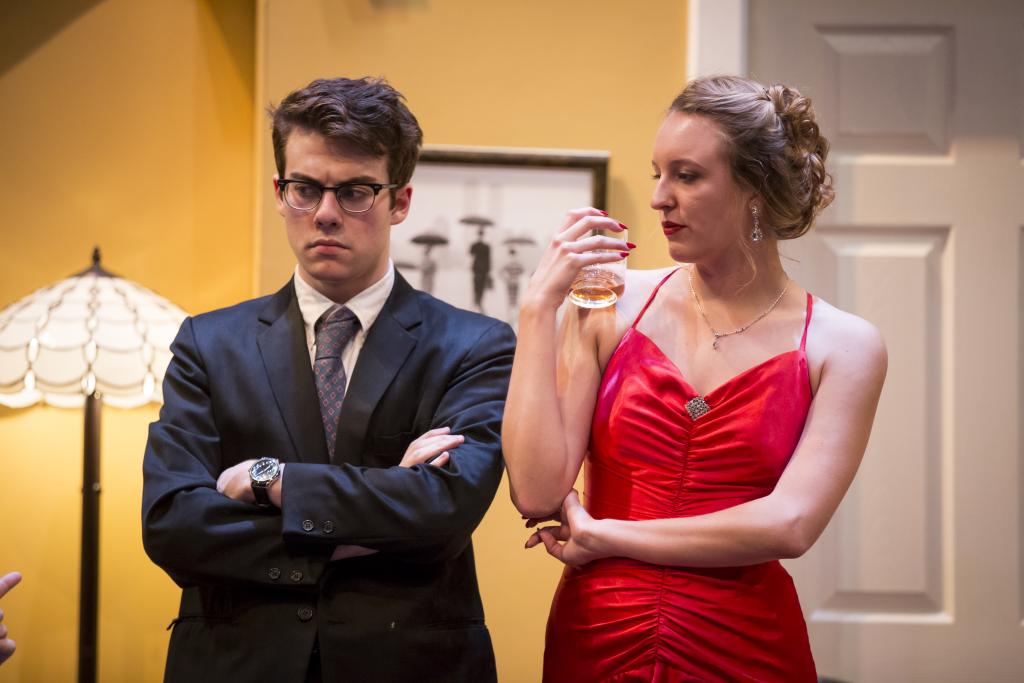 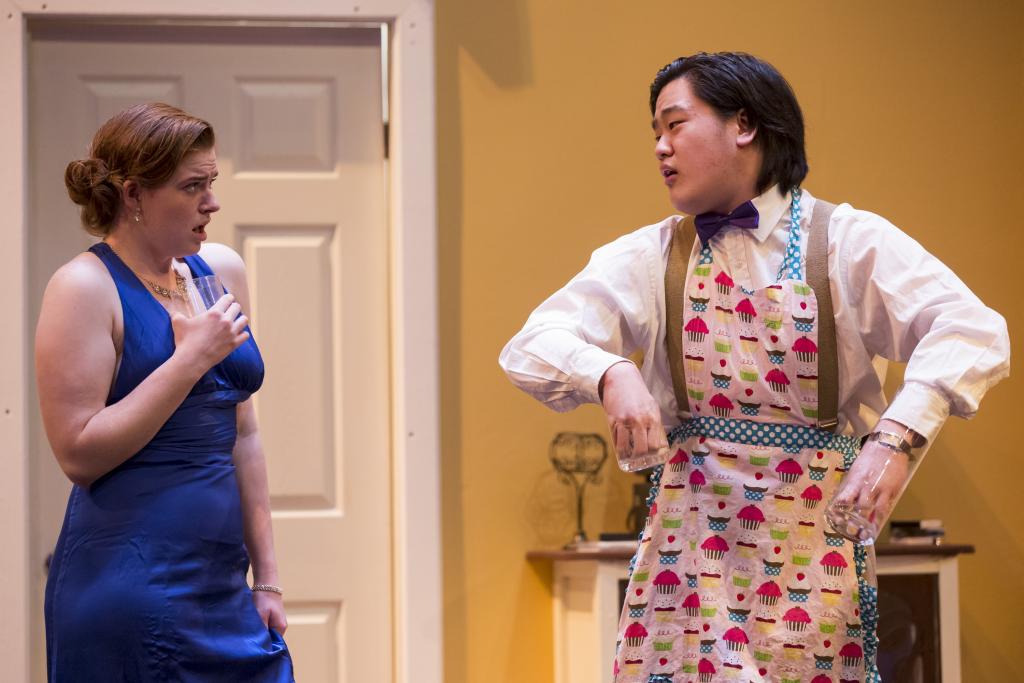 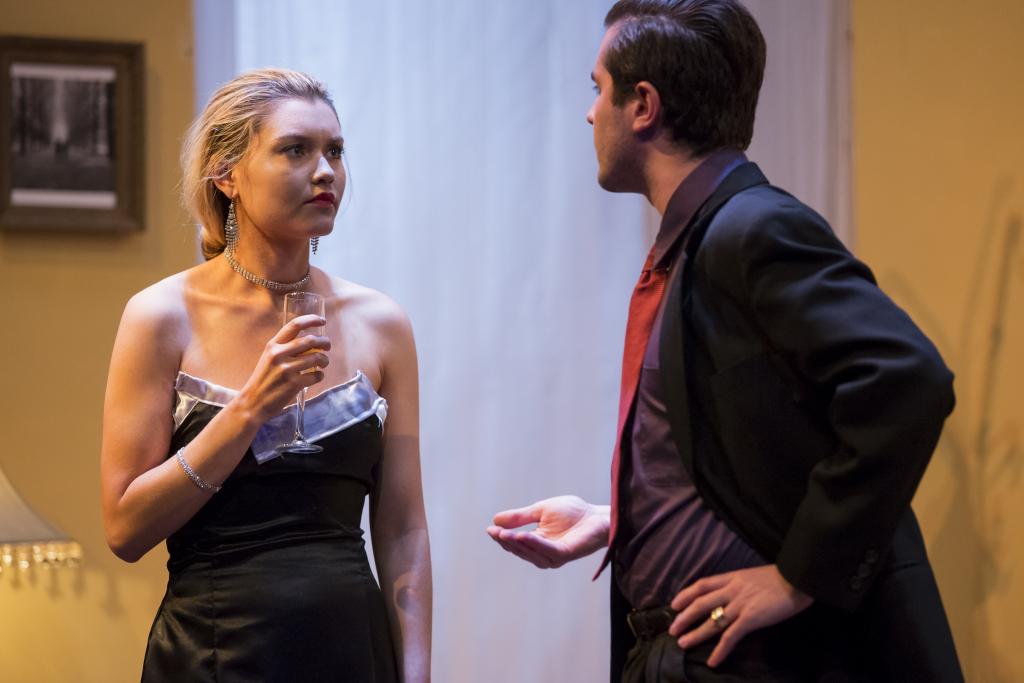 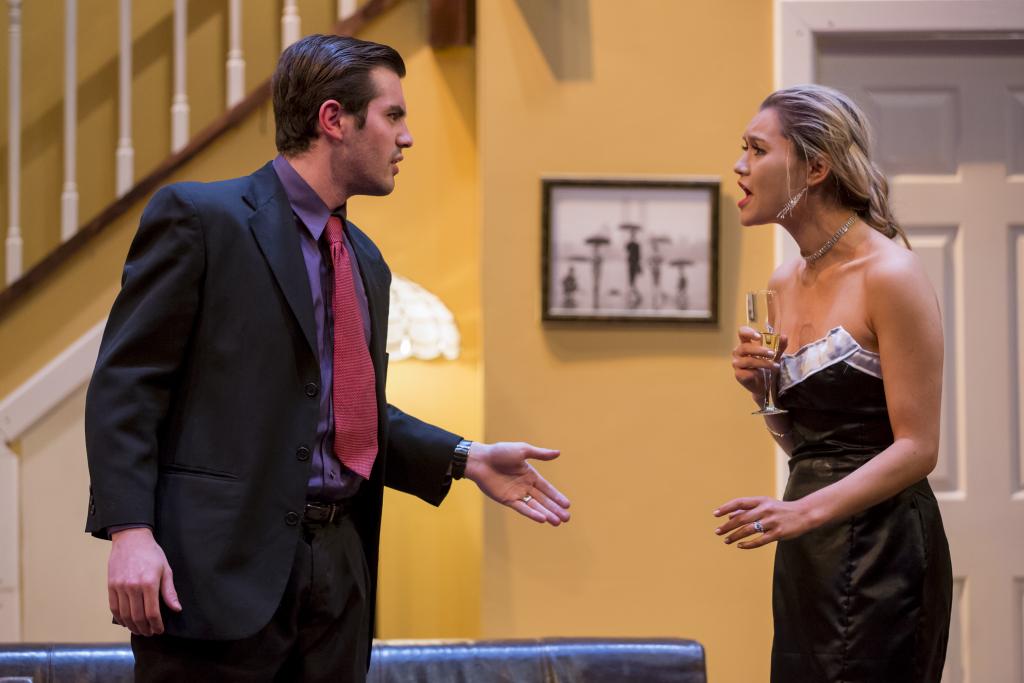 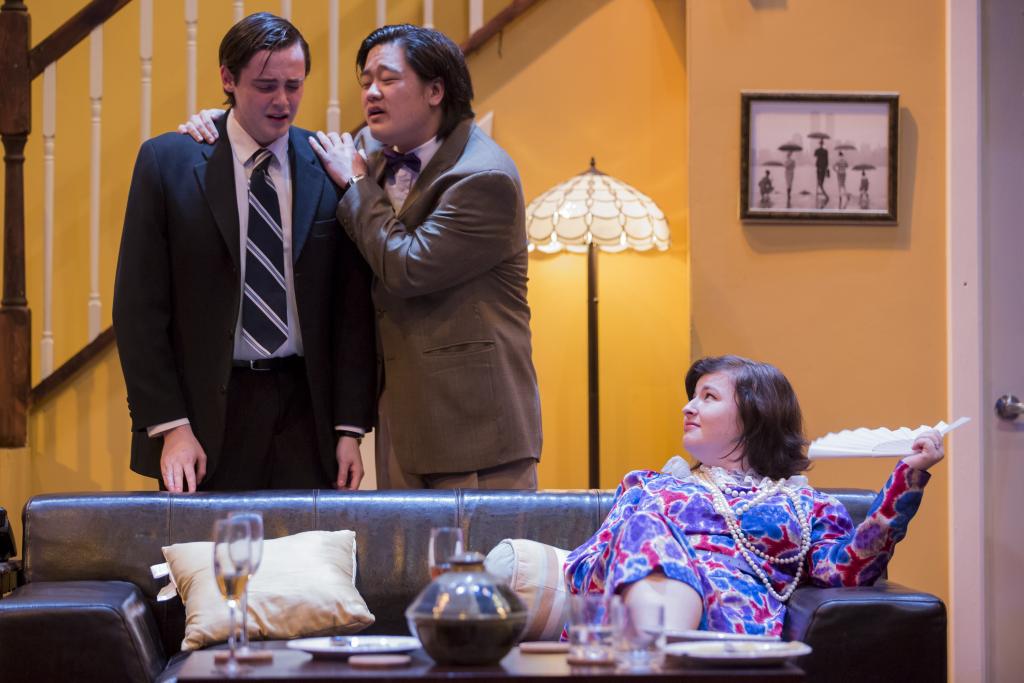 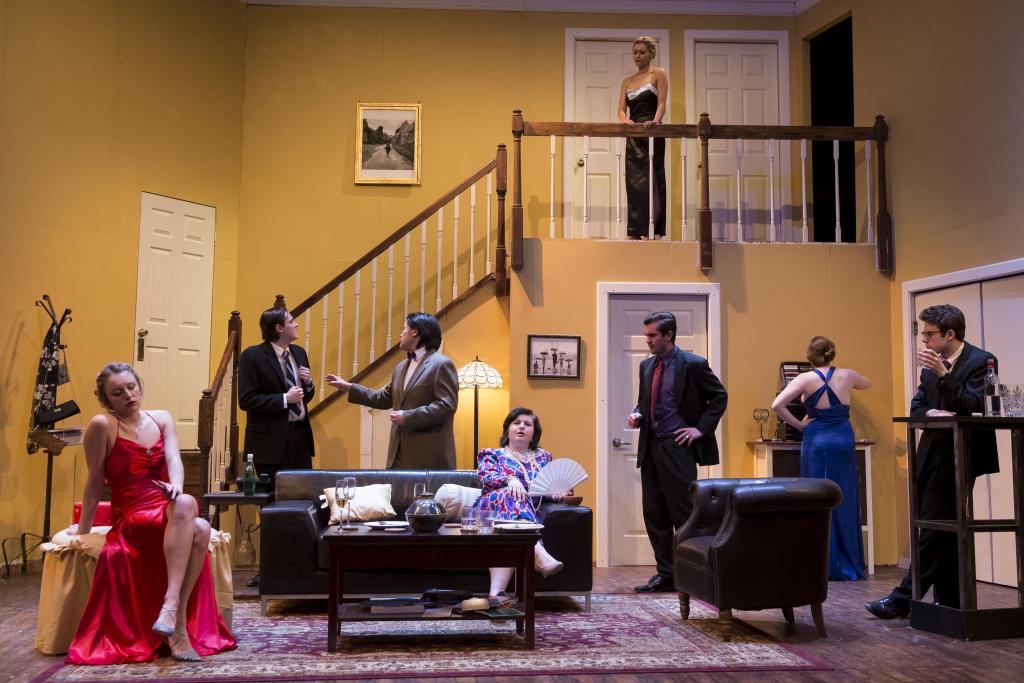 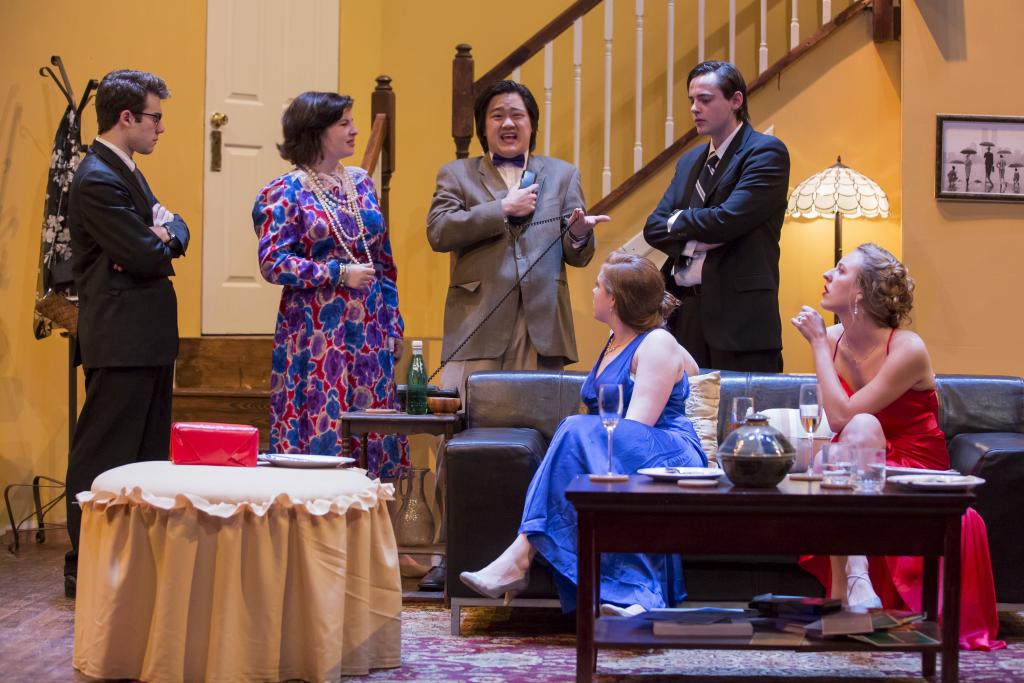 People are talking in Neil Simon’s Rumors, directed by Alex Hearn, and the talk is all over the place. Invited by the deputy mayor to a dinner party, four couples are greeted by the sound of gunshots. The posh soiree they expected is overwhelmed by gossip and lies as each guest tries to juggle the mystery and their meal. Intrigue gives way to absurdity, and your guess is as bad as anyone’s.

Emma Maltby (Chris Gorman) is a first-year potential TAPS and History double major. With UT, she has performed in Macbeth (Lady Macduff) and a workshop of Selections from Angels in America (Harper Pitt) as well as several Theater [24] festivals. She currently serves as a member of UT's Student Committee.

Patrick McCarthy (Ken Gorman) is a second-year English and Linguistics double major. This is his first time acting with UT. He has previously worked as assistant sound designer for Cabaret.

Louise Simpson (Cassie Cooper) is a second-year in the College. This is her second show at University of Chicago, after Grey Gardens.

Natalie Pasquinelli (Claire Ganz) is a first-year in the College

Kyle Yeh (Ernie Cusack) is a second-year in the College majoring in Linguistics.  His previous UT credits include HamLion (PumbaaCrantz), The Still Alarm (Bob Barclay) and Hamletmachine (Polonius/Hamlet).  Other credits include Picnic (Howard), The Glass Menagerie (Jim), The Cherry Orchard (Yasha) and Joseph and the Amazing Technicolor Dreamcoat (Jacob).

Jackson Ruzzo (Lenny Ganz) is a second-year in the College, studying Theater & Performance Studies and Philosphy. This is his fifth show with University Theater. Previous roles include: Wolfgang Mozart in Amadeus, and Milo Tindle in Sleuth.

Claire DuCanto (Officer Pudney) is proud to be a part of her first University Theater production. An avid fan of comedy of errors, she takes great pleasure in laughing at the misfortune of others (Schadenfreude) whilst simultaneously pushing a pull door. When not dwelling in the editing rooms of Logan, you can find her all around campus, sticking a camera in other people's faces with Fire Escape Films.

Lexi Turner (Cookie Cusack) is a second-year in the College studying TAPS and Classics. Her previous UT credits include Aunt Julia in Hedda Gabler, Edna Jameson in The Still Alarm, or The Duchess of York in Richard II.

Alex Hearn (Director) is beyond honored to direct Rumors. He last directed The Still Alarm (Spring 2014) and assistant directed Amadeus (Winter 2015). He has acted as Nagg in Endgame and Steve in A Streetcar Named Desire (both Fall 2014). He also acts as Pulcinella in UofC Commedia.

Brett Pepowski (Stage Manager) is a third-year in the College.

Savannah Smith (Production Manager) is a second-year in the college studying English and Classics and is an (actual) native of Snedens Landing, NY. Rumors is her seventh show with University Theater. Previously she has been a part of the production management team for Fifth Planet, Macbeth, Much Ado About Nothing, and Godspell, was a costumes assistant for As You Like It, and was one of the playwrights for this quarter's New Work Week(ends).

Lauren Saunders (Costume Designer) is a third-year majoring in Physics.  She has previously designed costumes for the University Theater productions of Sleuth, Hedda Gabler, and The Credeaux Canvas, as well as the CES Fest production of CroMagnum.  She is a frequent participant in Theater[24].

Alexandra Garfinkle (Dramaturg) is a fourth-year TAPS major. She has trained at Black Box Acting Studio, served on Committee and has garnered nearly twenty credits as a designer, dramaturg, and director. Previously, she has worked as an assistant director for A Christmas Carol at the Goodman Theatre, directed UT's winter production of Amadeus, and wrote/directed A Sane Man, a performance piece centered on the 1961 trial of Adolf Eichmann. She will be working in the casting office at Northlight Theatre upon graduation.

Sarah Kim (Props Master) is a second-year EALC and TAPS double major. She has worked on six UT shows in the past, the most recent being director (Wild Thing, A Weekend of Workshops Fall 2014) and props master (Cowboy Mouth). This quarter, she is also working on The Effect Of Gamma Rays on Man-in-the-Moon Marigolds as the props master as well and directing Freudzen for Attori Senza Paura. Non-UT credits include assistant director (The Antitheatrical Prejudice).

Daniel Heins (Master Carpenter) is a student in the College.

Michael Roy (Master Electrician) is a third year chemistry major. Previous show credits include Grey Gardens (ALD), A Midsummer Night's Dream (ME), Much Ado About Nothing (ALD), Endgame (ME), and Fifth Planet (ME).

Tiffany (Tippo) Wang (Lighting Designer) is a second-year Psychology major in the College. She is employed as Master Carpenter on UT/TAPS tech staff, and has worked on a number of shows for both University Theatre and the Classical Entertainment Society as a lighting designer, stage manager, master electrician and board op.

Lauren Eames (Tech Staff Liaison) is a second-year Religious Studies Major.  She has worked on a number of lighting and production management teams within UT/TAPS in both lead and supporting roles and performs in U of C Commedia's ensemble as Pantalone.  She is the Assistant North Campus Theater Manager for the department.

Katy Surhigh (Assistant Costumer) is a first-year potentially majoring in Linguistics. This is her first time working on a mainstage show with UT.

Samantha Finley (Assistant Set Designer) is a third-year English major. She has previously served as the assistant director on UT's Sleuth and CES's An Apology for the Course and Outcome of Certain Events Delivered by Doctor John Faustus on This His Final Evening.

Isaiah Newman (Assistant Set Designer) is a first-year in the College majoring in Mathematics. He has previously been an assistant director for Fifth Planet (Winter 2015).

Calgary Haines-Trautman (Assistant Lighting Designer) is a second-year HIPSS major in the College. She has worked previously with CES as a lighting designer for their production of Life of Galileo as well as an assistant lighting designer for Iron Bridal Feast. This is her first foray into UT.

Brian Schwartz (Assistant Dramaturgy) is a first-year planning on majoring in Chemistry and Molecular Engineering. This is his first work on a mainstage with UT. He is currently directing the New Work Week show called Different Names for the Same Thing. He is really excited to be working with UT and working on Rumors.