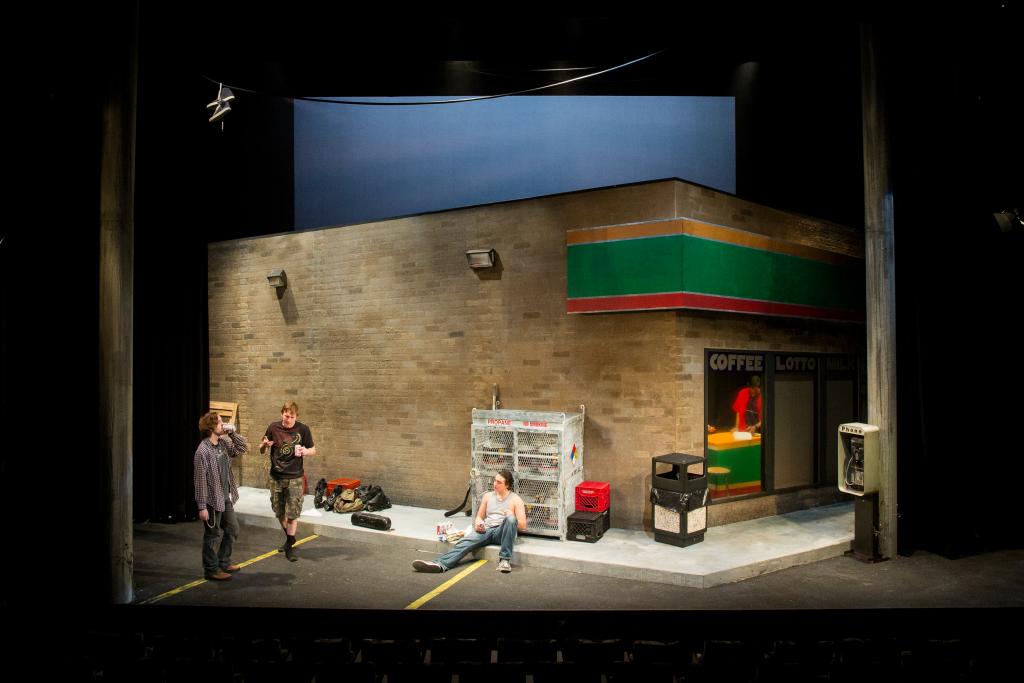 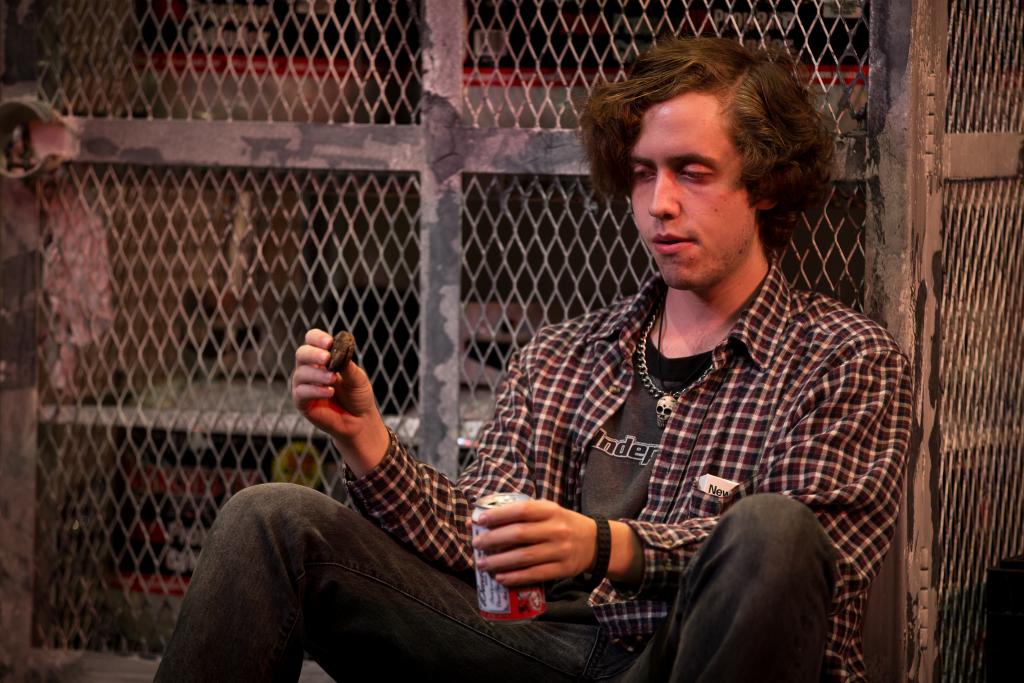 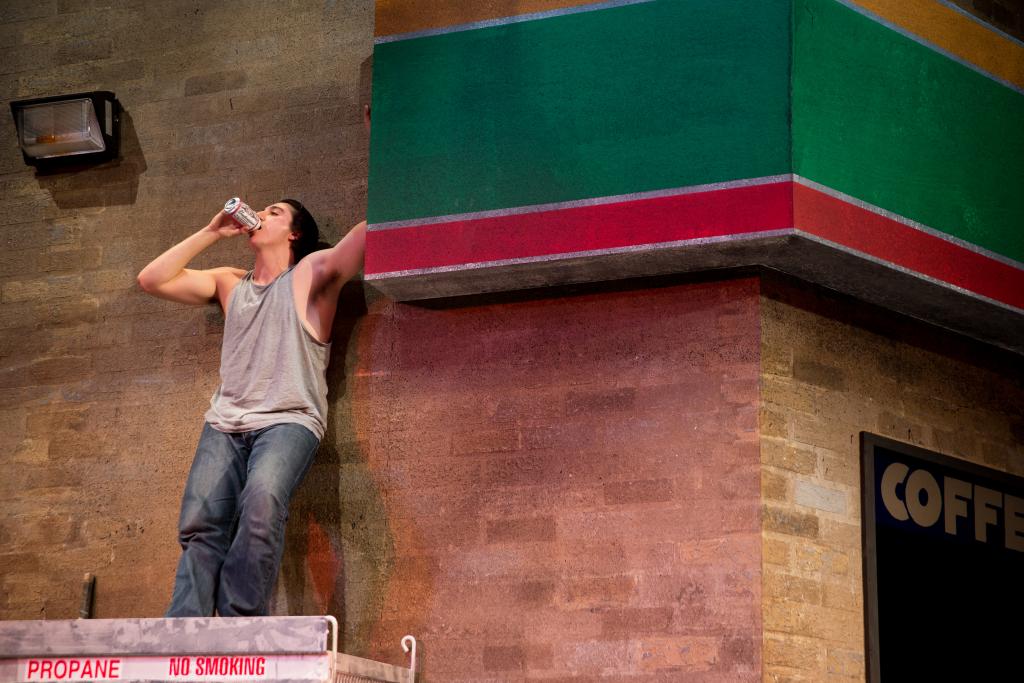 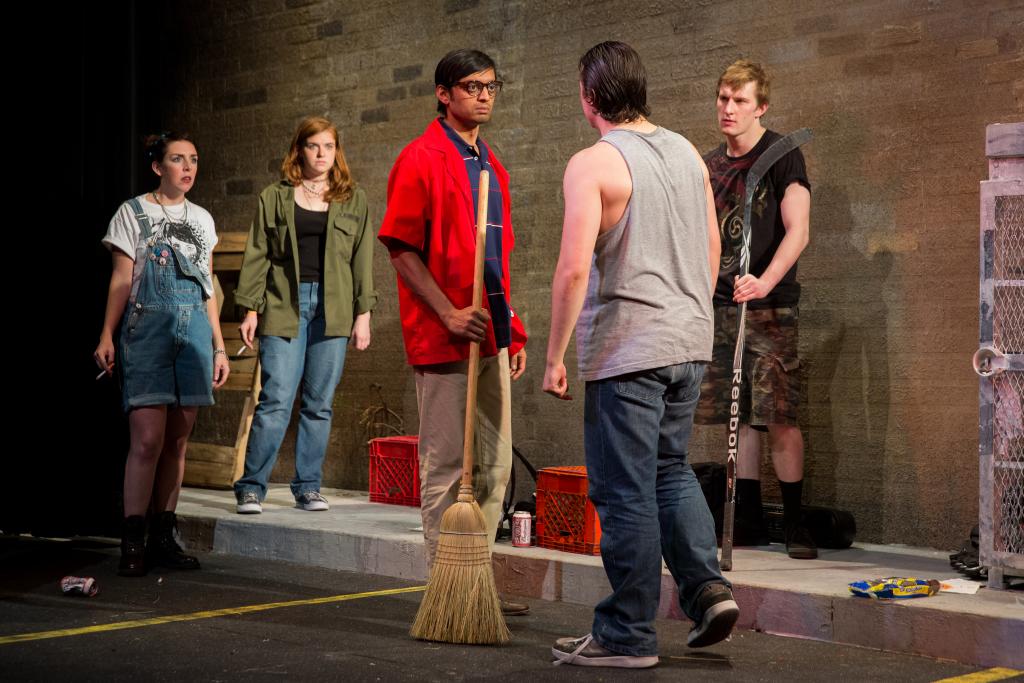 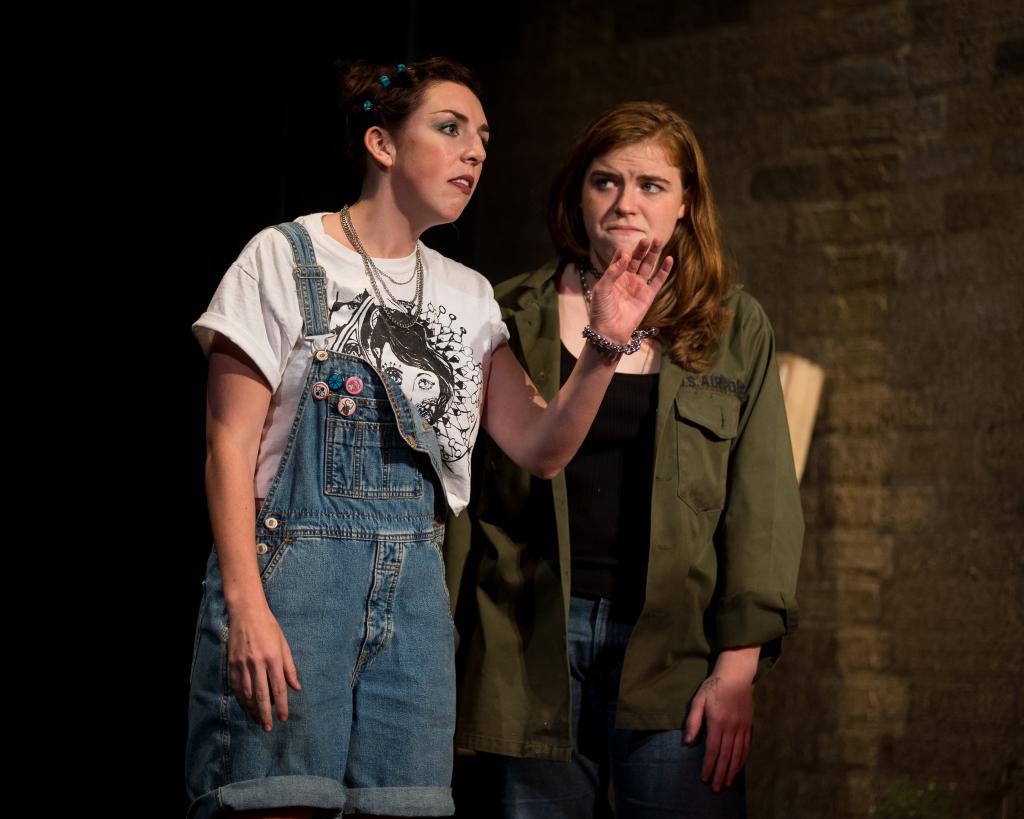 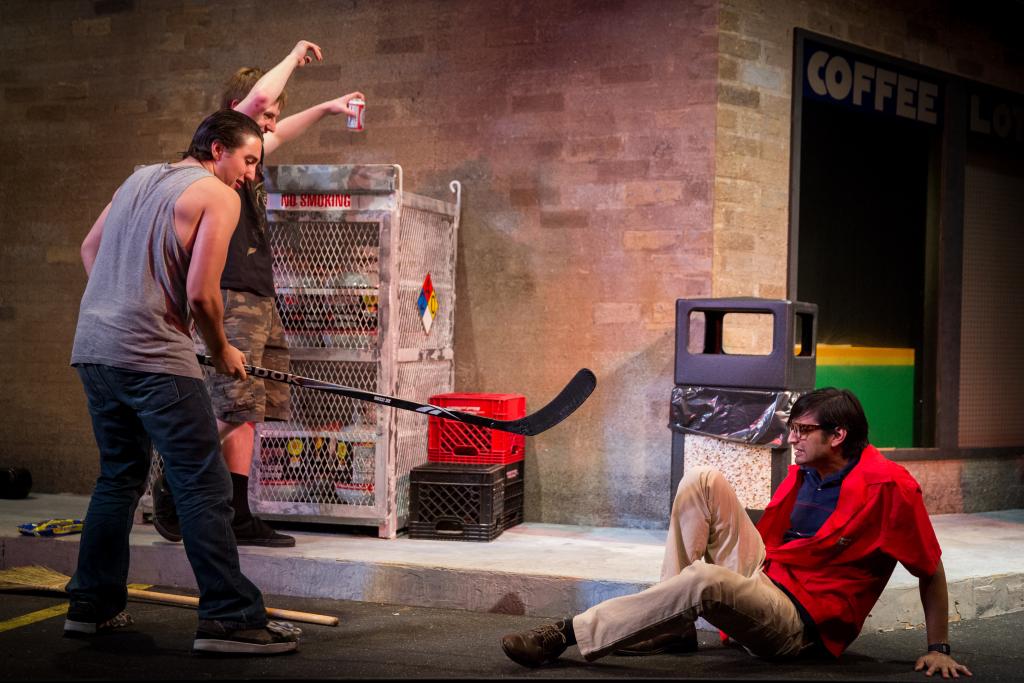 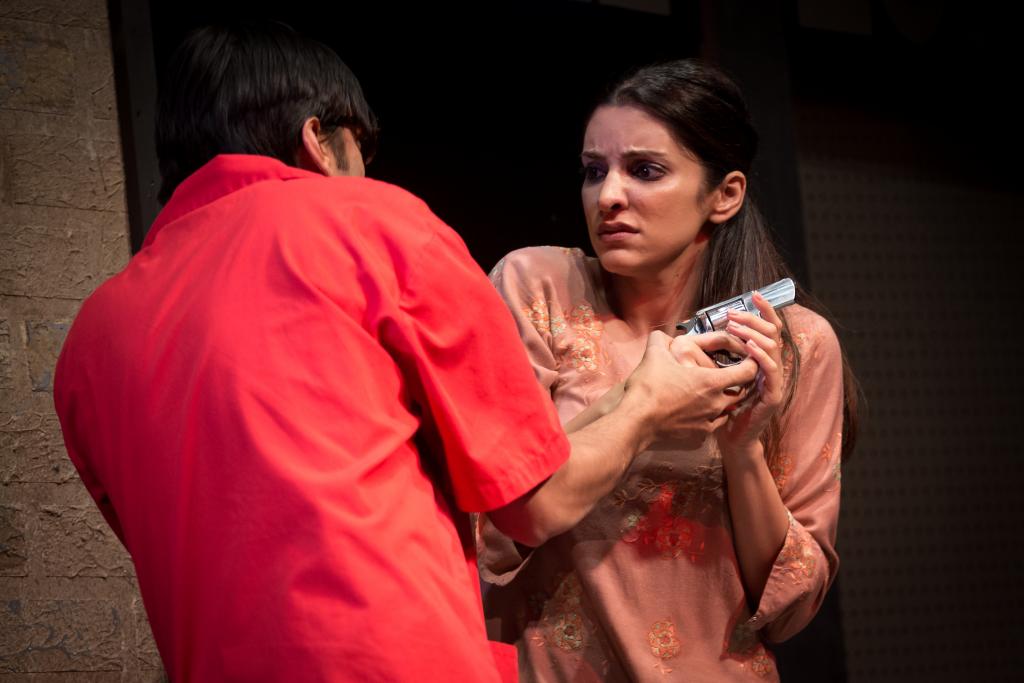 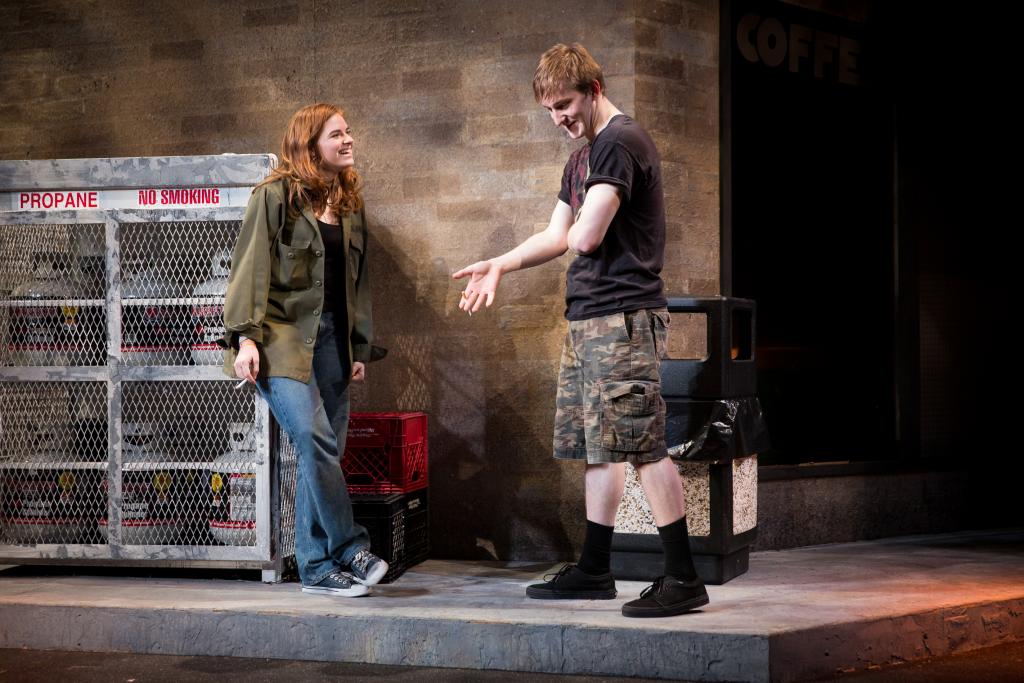 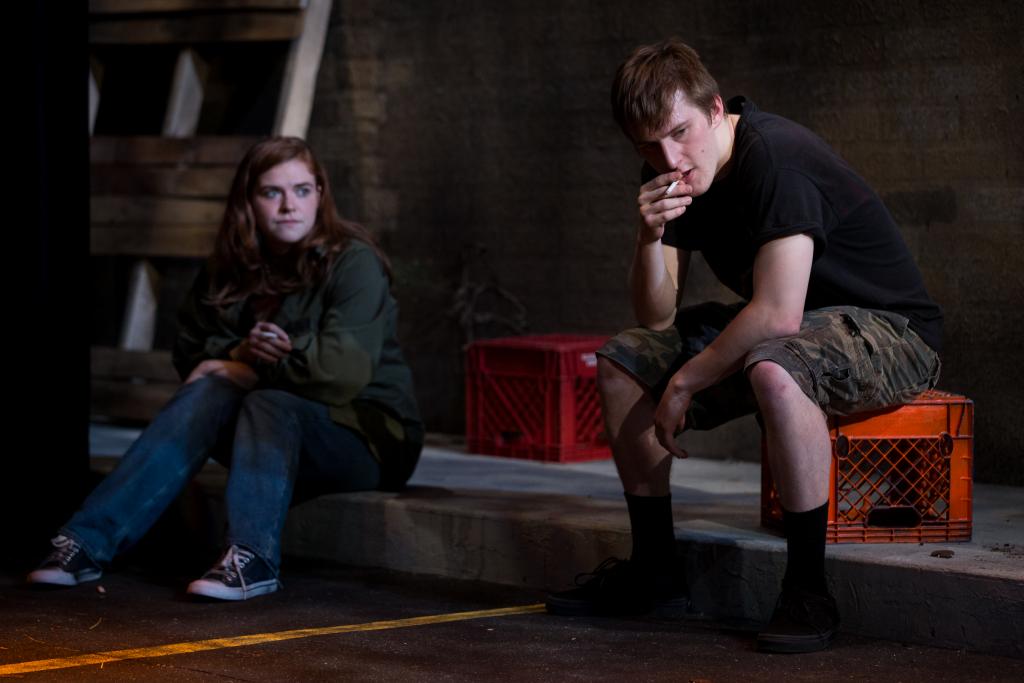 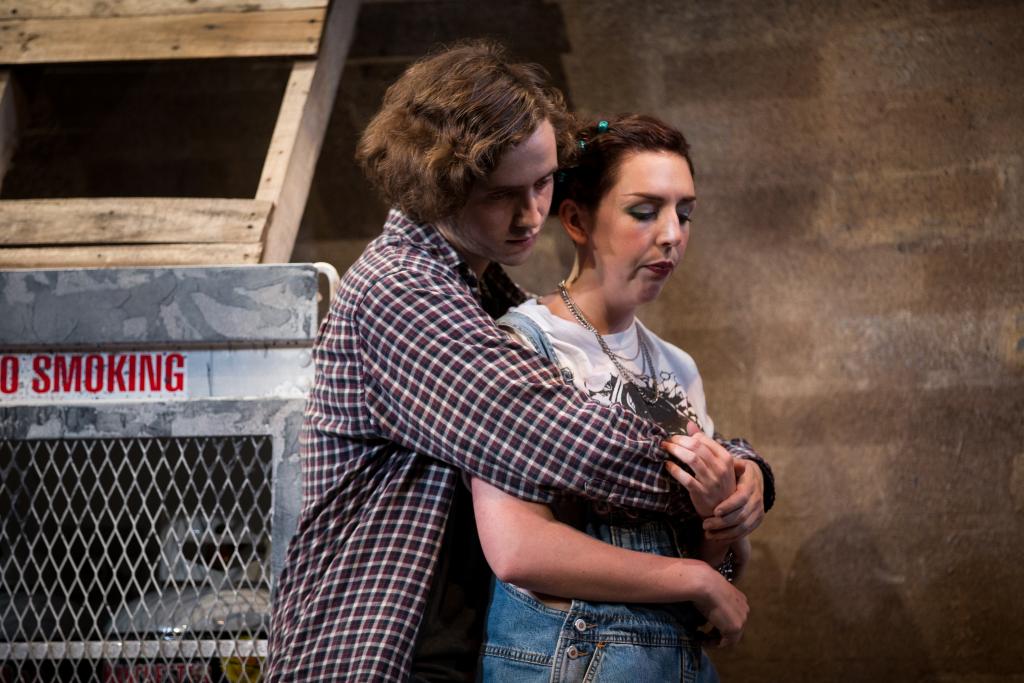 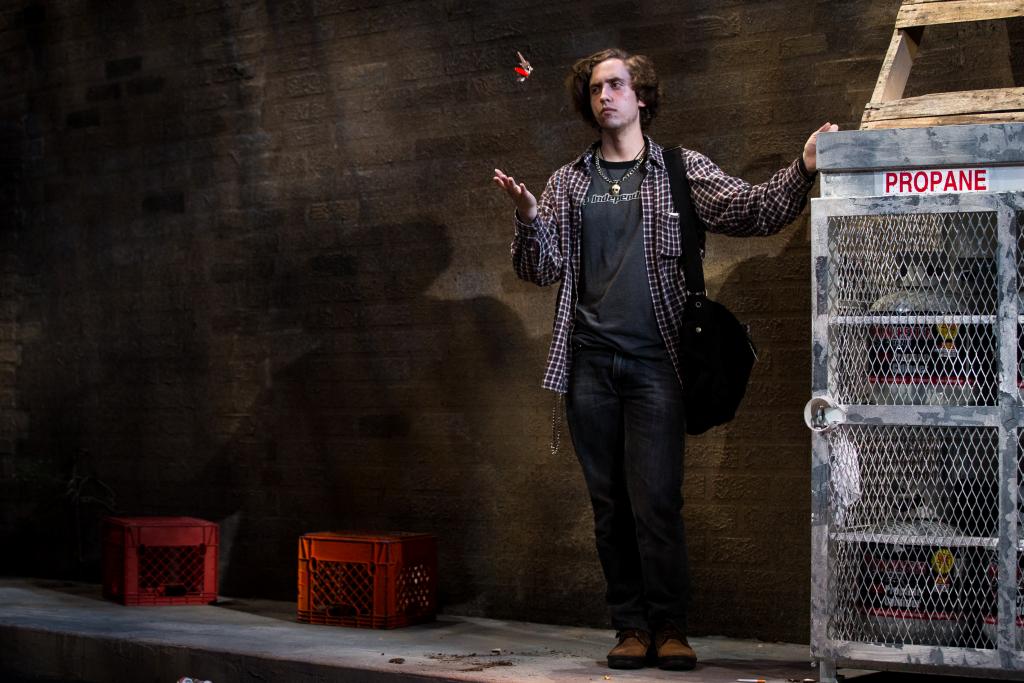 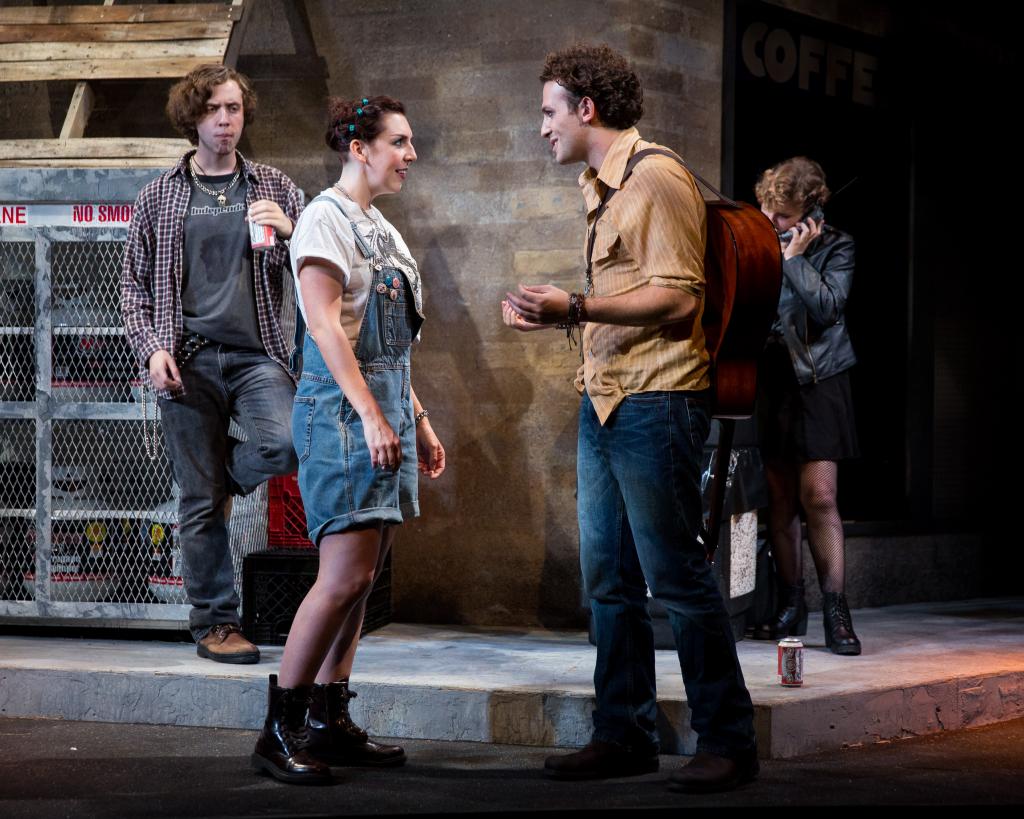 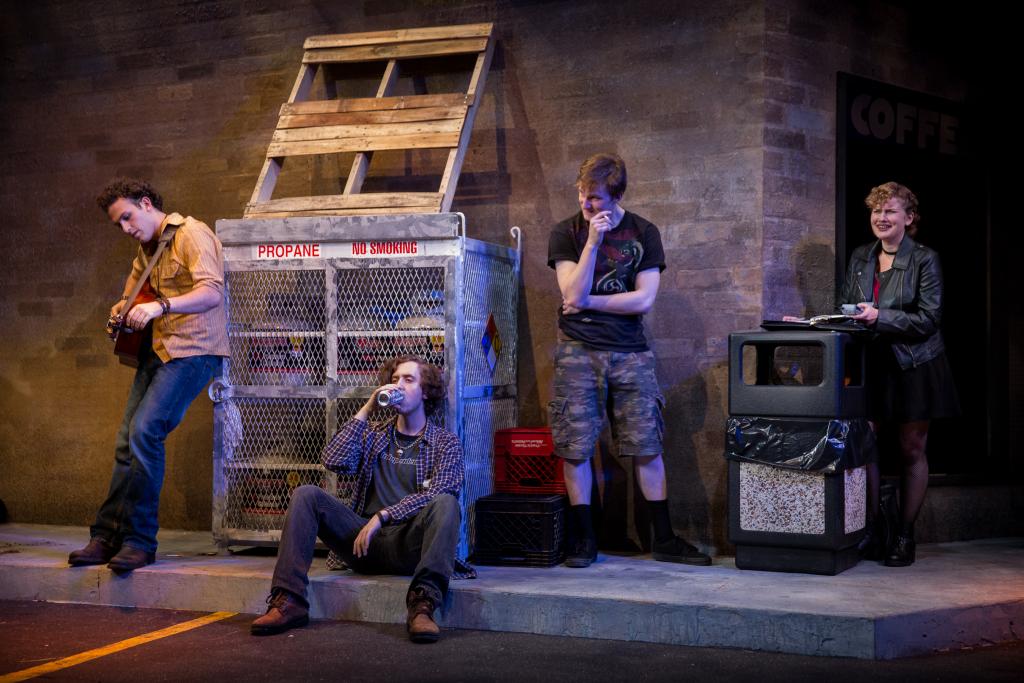 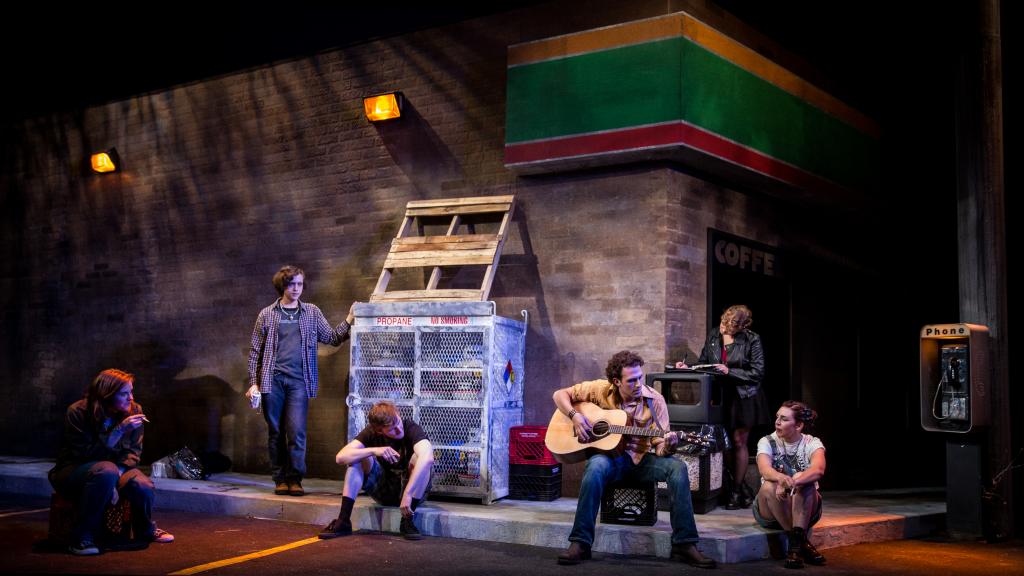 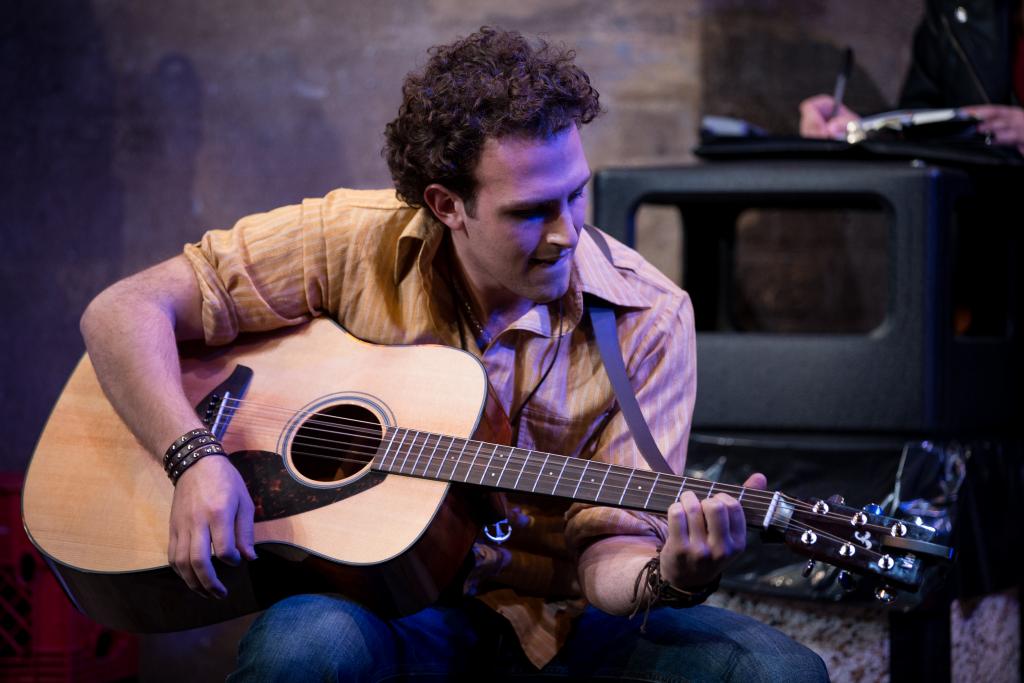 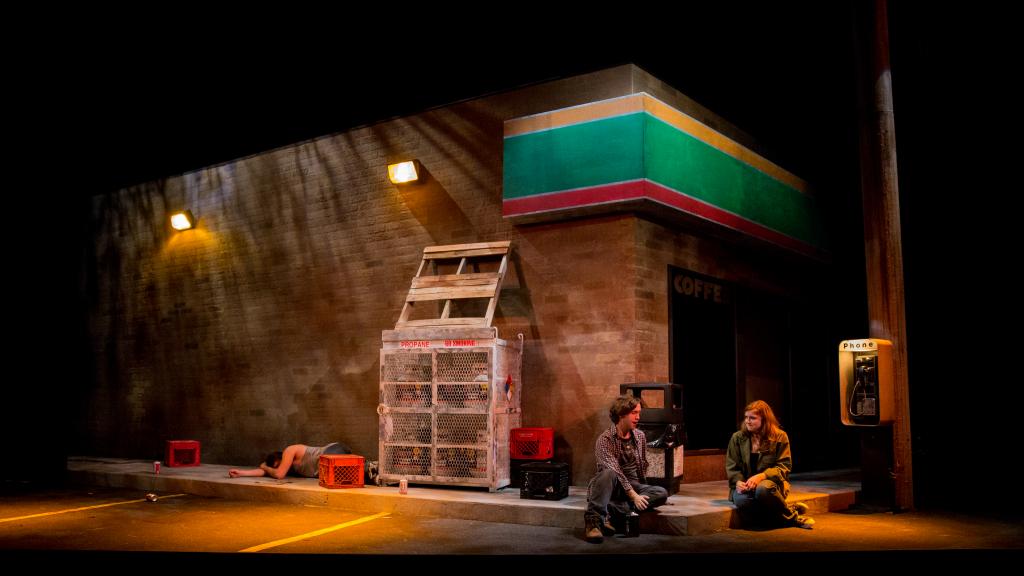 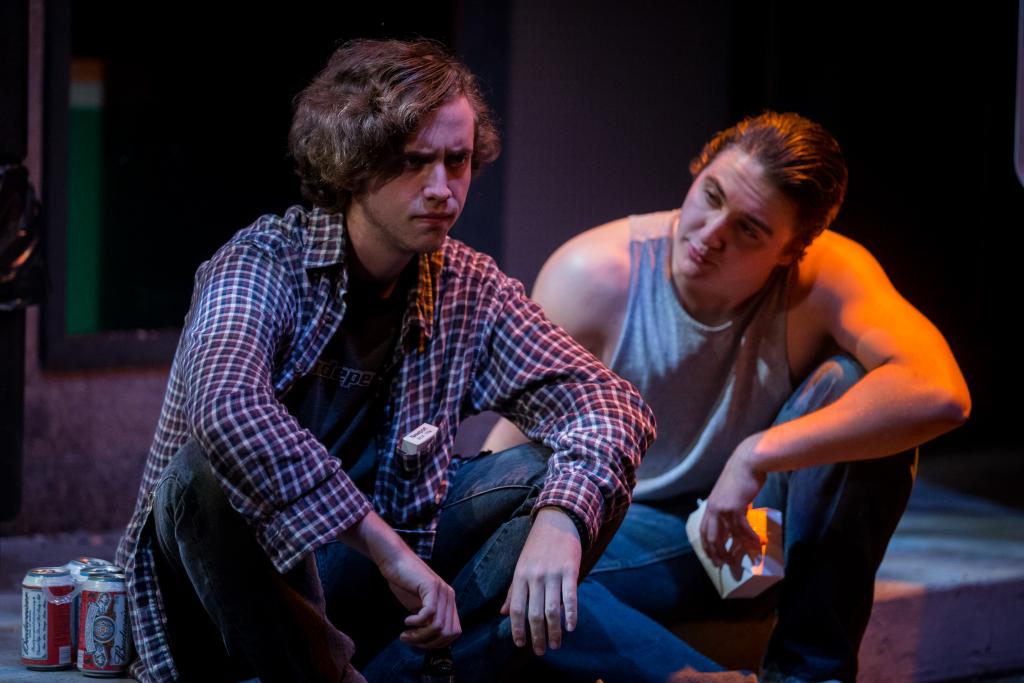 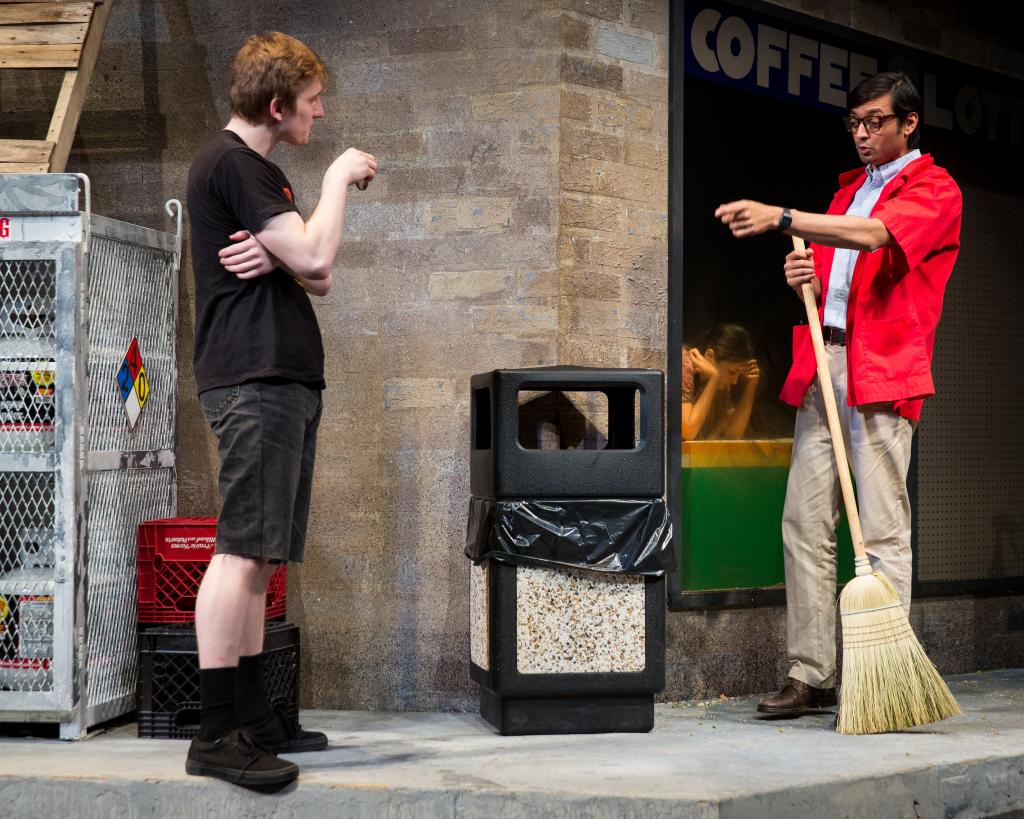 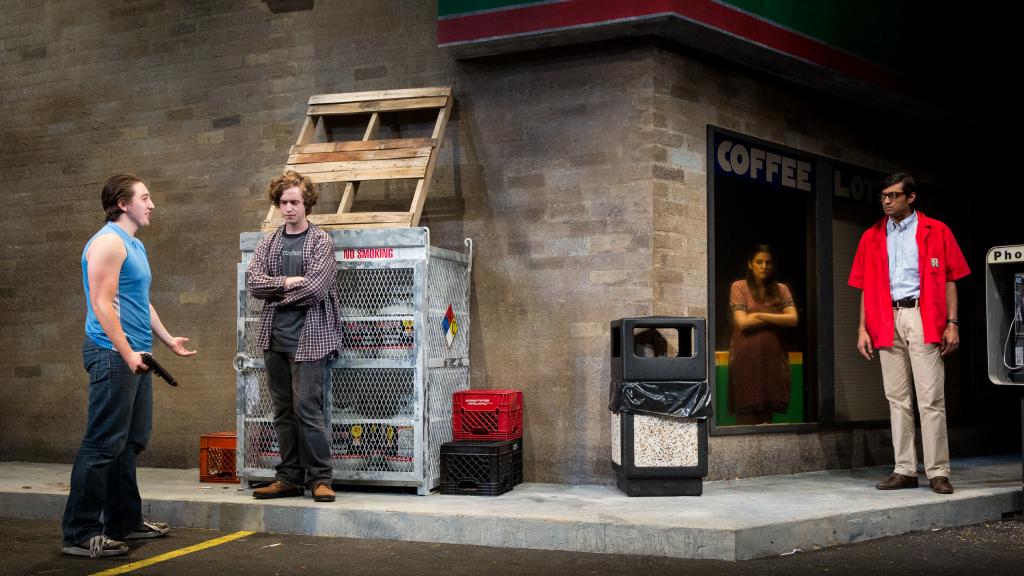 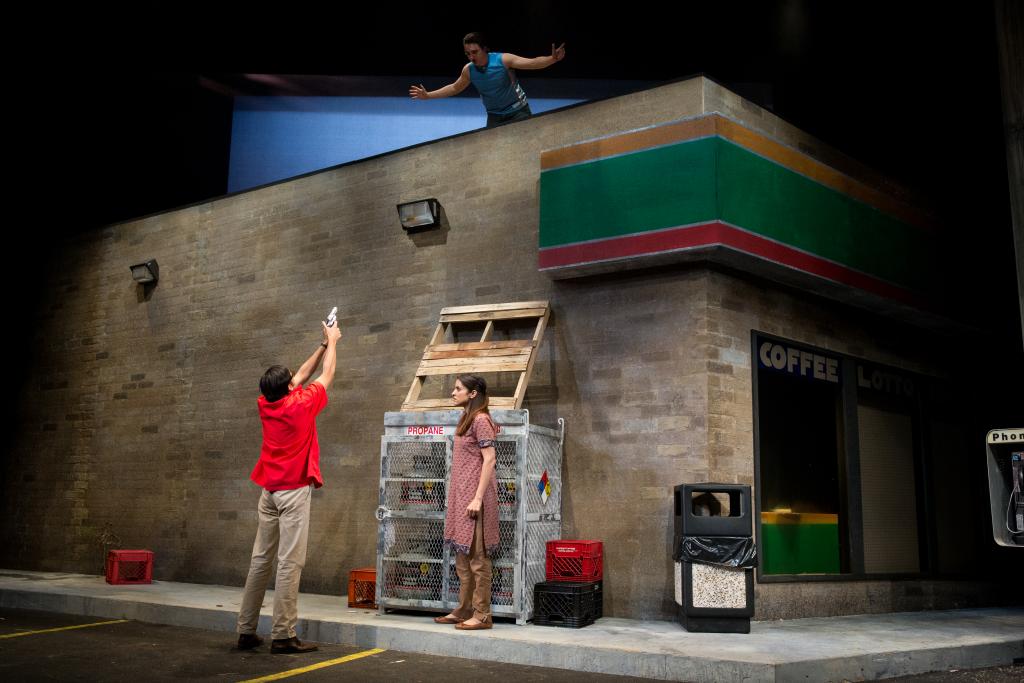 Ty Easley (Tim) is beginning his fourth-year at the University of Chicago as a Math and Physics double major in the College. He is the current Administrative Director of UChicago's Commedia dell'Arte troupe Attori Senza Paura and served as their Artistic Director the previous year. He has also been involved in a number of UT/TAPS productions in a number of roles, mostly sound and music (Henry V, Cabaret). Last winter, he had the pleasure of puppeteering the Demon Cat in FlipFlap Productions' show The Temp and playing the King Bee in Le Vorris and Vox's Winter's Thaw.

Jeremy Rodriguez (Buff) is a fourth-year in the College majoring in Economics and minoring in Cinema and Media Studies.  He has appeared in previous University Theater productions including Macbeth (Macbeth) and Fool for Love (Eddie). As well as The Tempest (Caliban) with Two Brothers Productions.

Alex Hearn (Jeff) is a second-year in the College studying Public Policy and TAPS. He has previously acted as Nagg in Endgame and Steve in A Streetcar Named Desire (Fall 2014). Last spring, he directed Rumors by Neil Simon. He is also the secretary of UT Committee and performs as Pulcinella in UChicago Commedia.

Kaiser Ahmed (Nazeer) is a Chicago based actor & director. Previously seen on stage last season in Jackalope Theatre's production of Lunacy! & Rasaka Theatre's Nice Indian Boy, you can see Kaiser next as Medvedenko in The Seagull at The Artistic Home Theatre coming this spring. Graduating from Columbia College Chicago's Theatre Directing program in 2008, Kaiser has also held positions as Founding Artistic Director of Jackalope, current Associate Artistic Director of Jackalope and Ensemble Member of The Artistic Home. Kaiser is a 2015-16 Eugene O'Neill National Directors Fellowship Finalist. You can currently see his directing work in Washer/Dryer for Rasaka Theatre playing at Victory Gardens through Oct. 11th, and then in The Raid for Jackalope Theatre playing Nov. 4th - Dec. 12th.

Arya Daire (Pakeeza)  received her B.S. in Radio/TV/Film and English Literature at Northwestern University.  TV credits include A Christmas Carol - The Concert and  Chicago Fire.  Chicago theater credits include Inana with TimeLine Theatre, Samsara with Victory Gardens Theatre, Principal Principle with Stage Left Theatre, Rudolph the Red-Nosed Reindeer: The Musical with Emerald City Theatre, Much Ado About Nothing with Rasaka Theatre, Disconnect with Victory Gardens Theatre and The 25th Annual Putnam County Spelling Bee with the Beverly Arts Center.  Arya is represented by Stewart Talent.

Emma Maltby (Bee-Bee) is a second-year potential TAPS and English double major. With UT, she has performed in Rumors (Chris Gorman), Macbeth (Lady Macduff), and a workshop of Selections from Angels in America (Harper Pitt) as well as several Theater [24] festivals. She currently serves as a member of UT's Student Committee.

Sophie Kennedy (Sooze) is a fourth-year TAPS and Political Science major. A writer and performer, she has acted in many UT, TAPS, and Dean's Men shows. She currently serves as Pubicity Manager on TAPS Admin Student Staff.

Elisabeth Del Toro (Erica) is a fourth-year TAPS major. She has acted for University Theater in This Is How It Goes, Closer, Cabaret, Godspell, Grey Gardens, House of Yes, Drowsy Chaperone, add ALICES, run crew for Henry VI, assistant sound design with Glass Menagerie, and did the .gif design for Hamlion, and directed a Commedia dell’Arte musical Cherry Poppins. Elisabeth is also a curator of the Theater[24] Festival and Chair of the University Theater Committee.

Shade Murray (Director) is a lecturer in the TAPS program at University of Chicago. Professional directing credits include the upcoming world premieres of Brett Neveu's Pilgrim's Progress and Ike Holter's Sender, both at A Red Orchid Theater, where he is an ensemble member.  Also at A Red Orchid: Accidentally Like a Martyr, Mud Blue Sky, Trevor, The Aliens, The Butcher of Baraboo, Abigail's Party and Kimberly Akimbo. Other Chicago directing credits include productions at Steppenwolf Theater Company, Writers' Theatre, Victory Gardens, Second City, Steep Theater, Next Theater, Wildclaw Theater, Strawdog Theatre, Cole Theater, Roadworks Productions, and others.

Julia Santha (Assistant Director) is a fourth-year majoring in Law, Letters and Society and Theater and Performance Studies. Previously, she has directed Samuel Beckett's Endgame, Sam Shepard's Fool for Love, and a scene from David Mamet's Boston Marriage.

Claire Haupt (Assistant Production Manager) is a third-year Theatre and Performance Studies major in the college. She has studied with and under peer, university, and professional production managers and looks forward to a career in arts management. She has past experience in acting, stage management, and scenic building. Currently, Claire is a proud production manager in University Theatre.

Natalie Wagner (Stage Manager) is a third-year student majoring in Law, Letters, and Society. Her UT stage management credits include Endgame, The Effect of Gamma Rays on Man-in-the-Moon Marigolds, and four mainstage shows as ASM. She serves as UT Committee's Treasurer and as a Curator for the quarterly Theater[24] festival. Additionally, she has worked on multiple summer theater festivals in NYC, including two New York Musical Theatre Festival productions: Spot on the Wall (PA) and the concert Beyond Words (SM).

Alice Sheehan (Assistant Stage Manager) is a second-year student double majoring in NELC and TAPS. She has worked in both lighting design and stage management. Her credits include Endgame (ALD), Amadeus (LD), Love's Labour's Lost (ME), and This Is How It Goes (Assistant Floor Manager).

Ryan Bourque (Fight Choreography) most recently acted in and designed fights for The Hypocrites’ twelve-hour Greek adaptation All Our Tragic, and designed a 13 minute fight for Chuck Mee's world premiere of The Glory of The World, at the 2015 Humana Festival. He has acted in Cyrano De Bergerac (Chicago Shakespeare Theater), The Mikado, Sophocles: Seven Sicknesses, Woyzeck, The Pirates of Penzance, (The Hypocrites), The Earl (The Inconvenience), Cherrywood (Mary Arrchie), and Chicago PD. He has choreographed fights for Death and the Maiden, Appropriate, Oedipus El Rey, (Victory Gardens), The Lord of the Flies, Leveling Up, Marie Antoinette, The Book Thief (Steppenwolf Theatre Company), Hit The Wall, The Earl, (The Inconvenience), All Our Tragic, Coriolanus, Romeo Juliet, Sophocles: Seven Sicknesses, Woyzeck (The Hypocrites), and Exit Strategy (Jackalope). He is a 2015 Equity Jeff Awards nominee for All Our Tragic, and a 2013 Jeff Award winner for his fights in Coriolanus. As a freelance photographer, he captures Dance, Theatre, and Music, and he is a company member to The Inconvenience, and The Hypocrites.

Ben Carcello (Technical Director) worked for two years as Technical Director at Presbyterian College. He has also worked as a carpenter for Lookingglass Theatre Company and Chicago Shakespeare Theater. He holds a bachelor’s degree in Theatre Design and Production from Illinois State University.

Jenny Pinson (Properties Manager) has been a freelance Properties Designer in Chicago since 2006, when she graduated from The Theatre School of DePaul University with her BFA in Theatre Technology.  She has had the opportunity to work with a variety of theatre companies in the Chicagoland area including Theater Wit, Redtwist Theatre, Oakton Community College, Route 66 Theatre Company, TUTA, Drury Lane Oakbrook, and Emerald City Theatre Company, among others.

Jessica Doyle (Master Electrician) is a freelance lighting designer, assistant, and master electrician who's been located in Chicago for about a year now. She graduated from Michigan State University in 2013 with a BFA in Theatre Design & Production, concentrating in lighting design. Her design work can be most frequently seen at Mudlark Theatre Company, a children's theater in Evanston. This summer Jessica completed the lighting design internship at Williamstown Theatre Festival in Massachusetts.

Christine Pascual (Costume Designer) is a freelance costume designer based in Chicago.  Most recently she designed the world premiere of Feathers and Teeth, the workshop productions of Feathers and Teeth, Carlyle, and The Magic Play for New Stages 2014, New Stage 2012 and New Stage 2013, The Happiest Song Plays Last for the Goodman Theatre.  Other Goodman credits include Fish Men; El Nogalar; Massacre (Sing to Your Children) (co-production with Teatro Vista); Congo Square Theatre Company’s Black Nativity and Joe Turner’s Come and Gone (co-production with Congo Square Theatre Company). Recent credits include The Island at American Players Theatre,  The Projects and The Royale at American Theater Company,Tamer of Horses,  A View from the Bridge, Between You, Me and the Lampshade at Teatro Vista. Other Chicago credits include Disconnect, The Elaborate Entrance of Chad Deity, Relatively Close, The Romance of Magno Rubio, Hambone, Blackbird and We are Proud to Present..., at Victory Gardens Theater; Bud, Not Buddy at Chicago Children’s Theatre; Trevor, Simpatico and Megacosm at A Red Orchid Theatre; Tigers Be Still at Theatre Wit;  Sizwe Banzi is Dead, The Piano Lesson, The First Breeze of Summer and Flyin’ West at Court Theatre; Our Lady of the Underpass at 16th Street Theater and Teatro Vista; The House on Mango Street at Steppenwolf Theatre Company; Welcome to Arroyo’s, It’s a Wonderful Life, True West, Topdog/Underdog, The People’s Temple and Living Out at American Theater Company; Sanctified, St. James Infirmary, Seven Guitars, Elmina’s Kitchen, From the Mississippi Delta and A Soldier’s Play at Congo Square Theatre Company; Ten Cent Night at Chicago Dramatists and Elliot, a Soldier’s Fugue with Rivendell Theatre Ensemble and Teatro Vista at Steppenwolf Theatre Company. Regional credits include The Island at American Players Theatre, Fences at Virginia Stage, and Joe Turners' Come and Gone at Centerstage,  Her off-Broadway credits include The Elaborate Entrance of Chad Deity at Second Stage Theatre. Ms. Pascual was a 2010 Henry Hewes Design Award nominee and an exhibitor at the 2011 Prague Quadrennial and the 2012 United States Institute for Theatre Technology conference.

Joe Court (Sound Designer) is a sound designer based out of Chicago since 2006. He is a company member with Mary-Arrchie Theatre Company. He has designed more than 90 shows since moving to Chicago with many different theater companies including: Mary-Arrchie, A Red Orchid, The Inconvenience, Theater Wit, Raven, TUTA, Haven, Emerald City,  Seanachai, Theatre Seven, Backstage, Boho, Lifeline, Pine Box, The Gift, University of Chicago, 59E59 (Off-Broadway, NYC), Clarence Brown Theatre (Knoxville, TN.), Great Lakers Theatre (Cleveland, OH),  Virginia Stage Company (Norfolk, VA), Actors Theatre of Indiana, and the Idaho, Lake Tahoe, and Illinois Shakespeare Festivals. From 2008 until 2012 Joe served as sound engineer for the Chicago production of the Tony Award-winning musical Million Dollar Quartet. He received a Joseph Jefferson Award nomination in 2009 for his design for The Unseen with A Red Orchid Theatre. He is a member of U.S.A. 829.

Stephanie Slaven-Ruffing (Sound Board Operator) is a second-year in the College majoring in Anthropology. She has previously worked on sound design for The Effect of Gamma Rays on Man-in-the-Moon Marigolds and SAMSU’S 2015 cultural show Citylights. She is currently sound designing UT’s production of House of Cards this fall and has also worked on Closer and Fifth Planet.