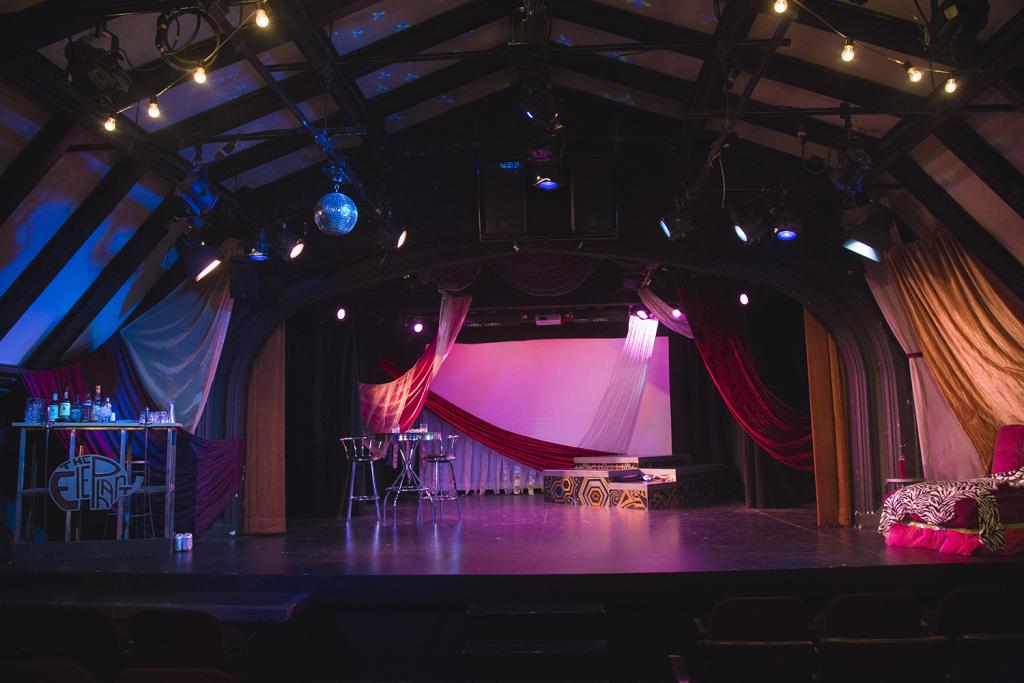 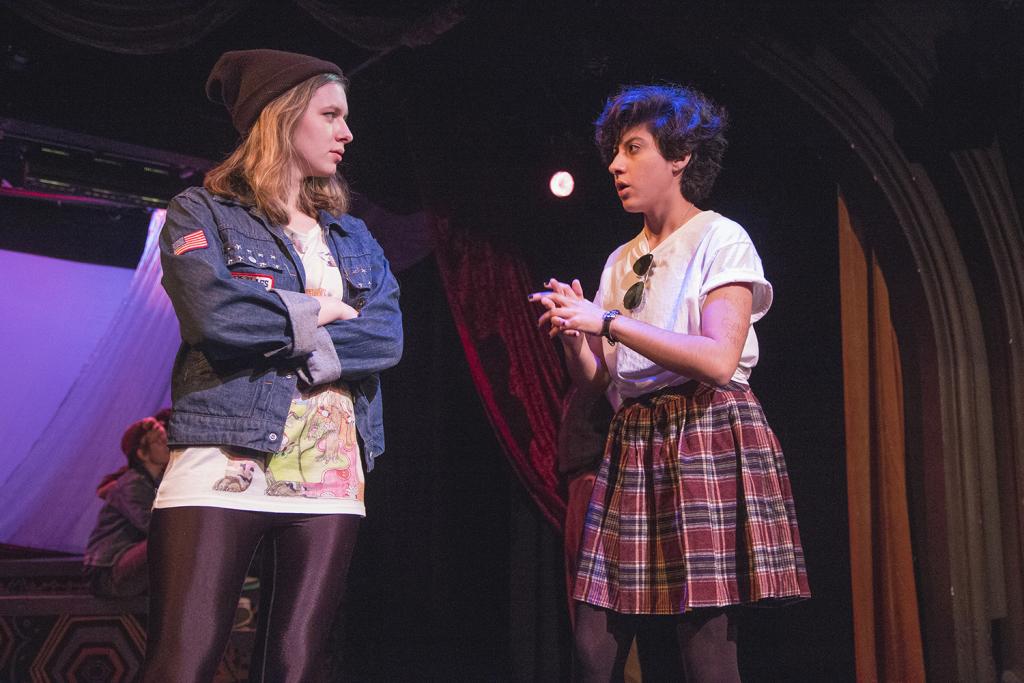 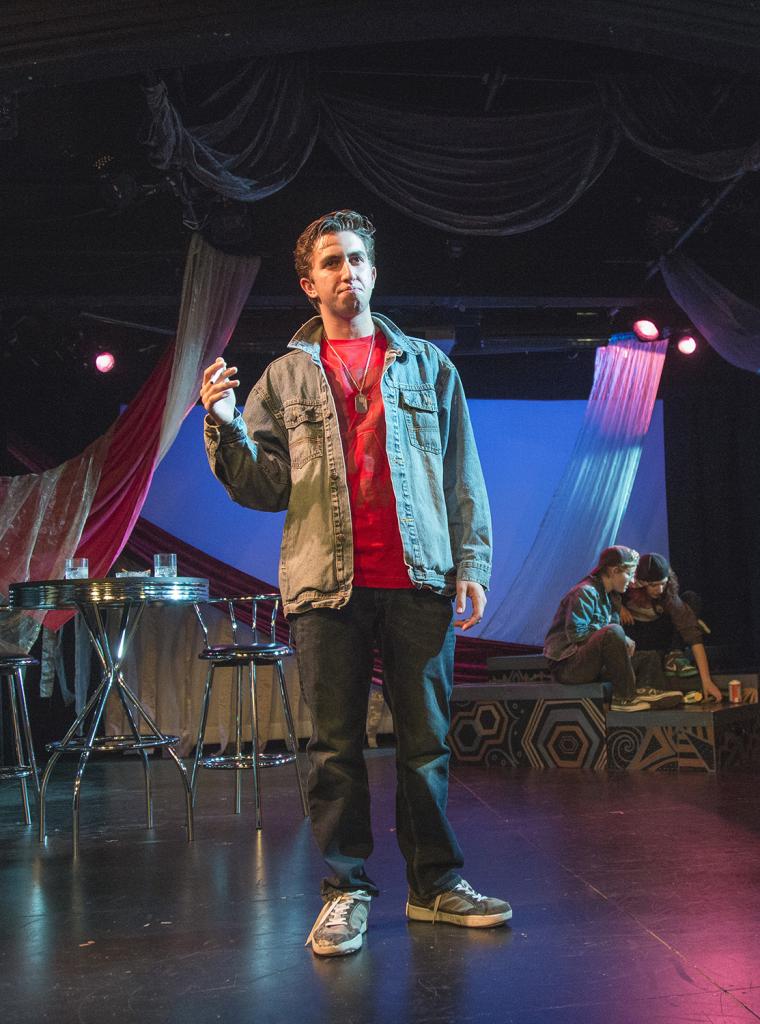 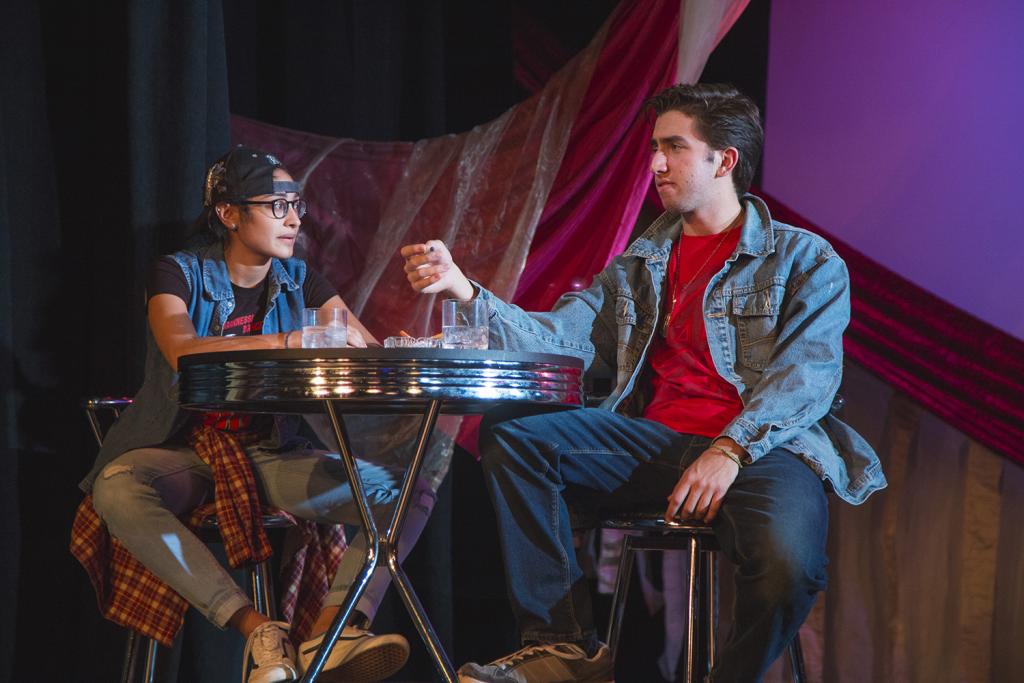 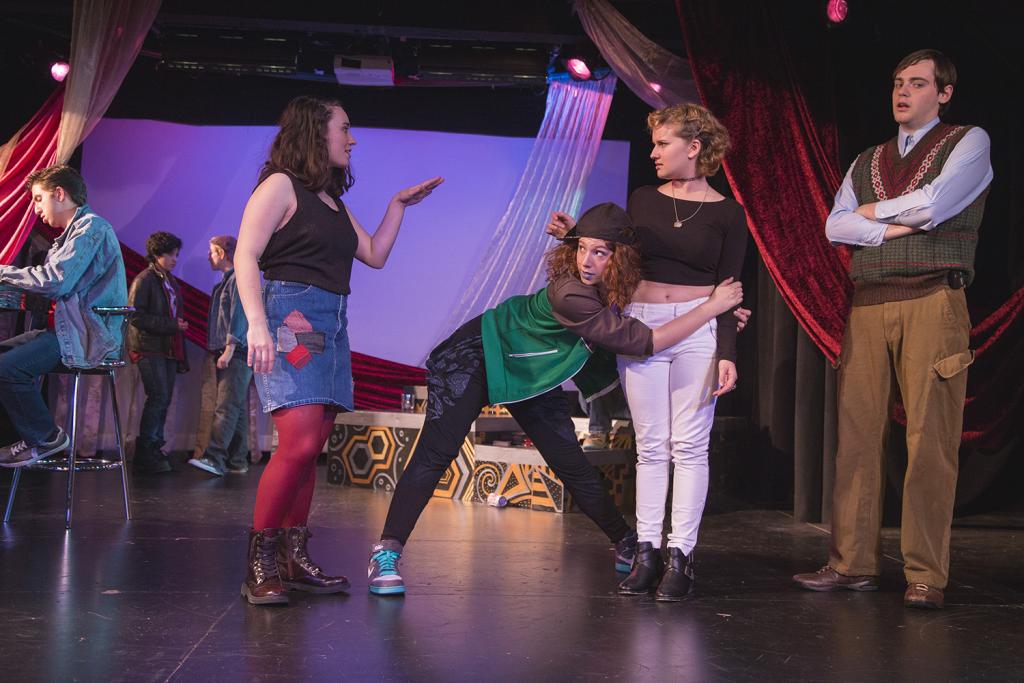 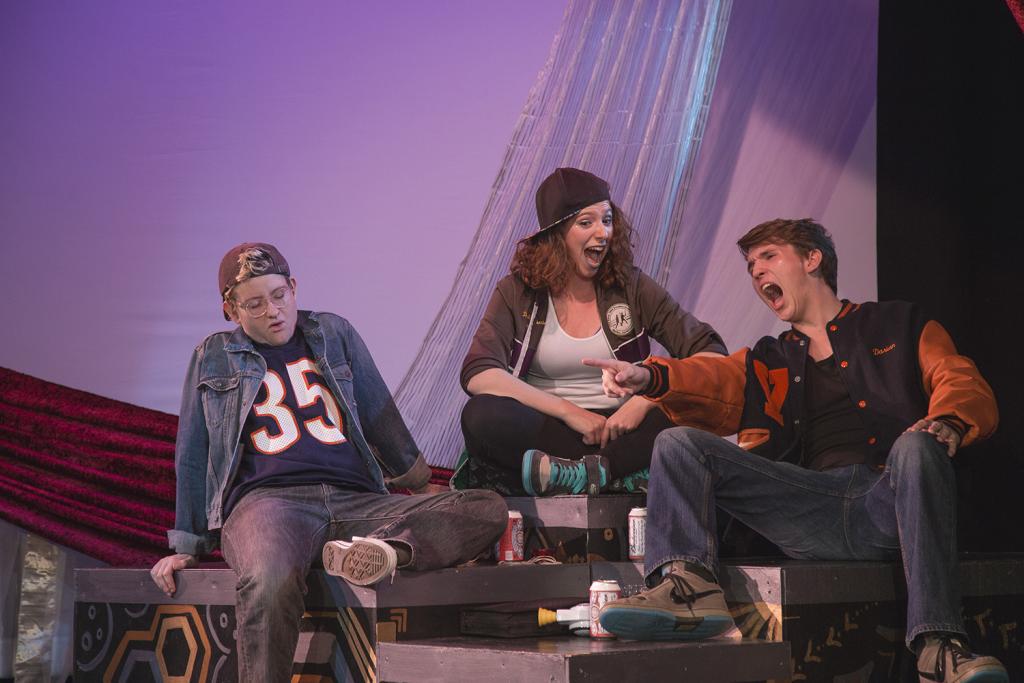 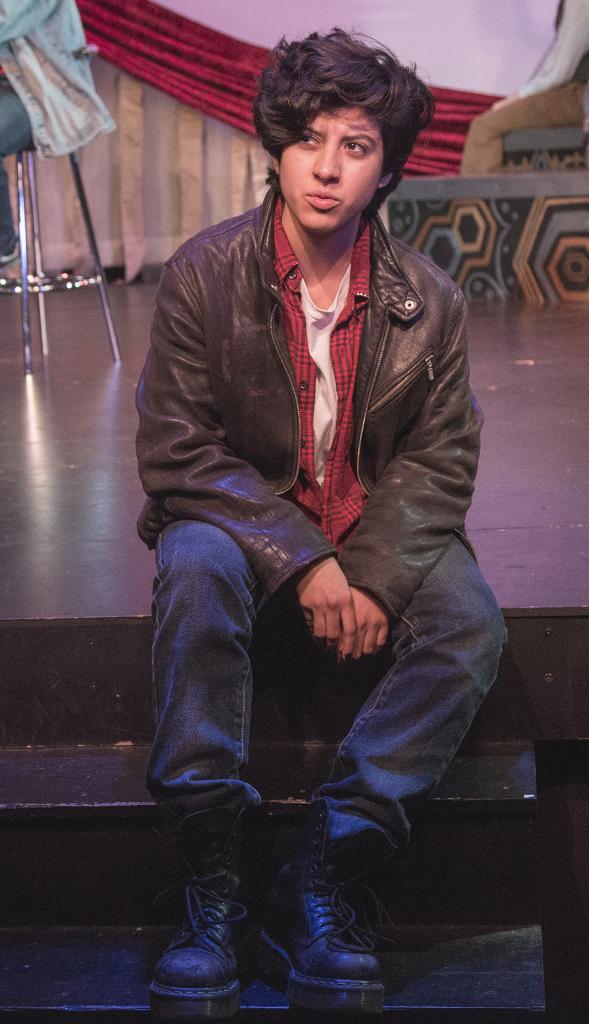 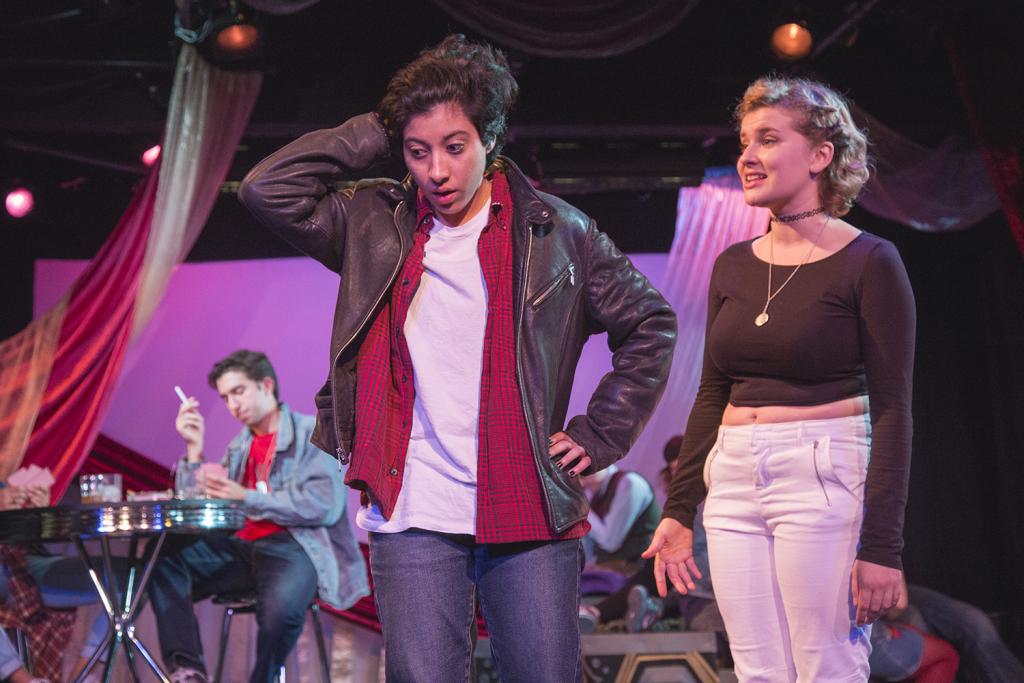 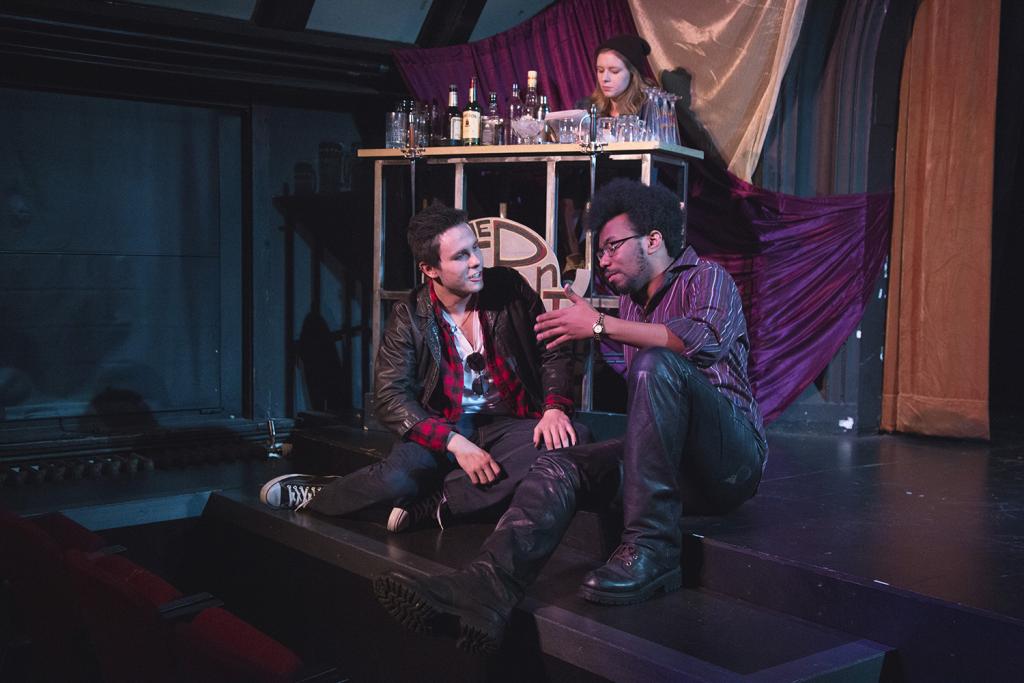 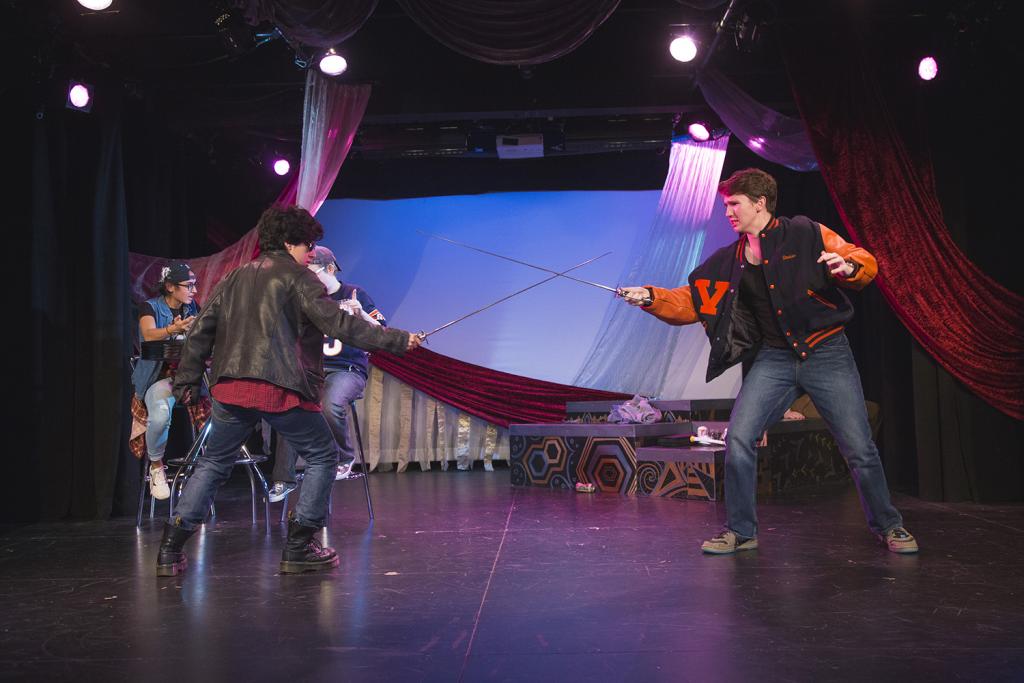 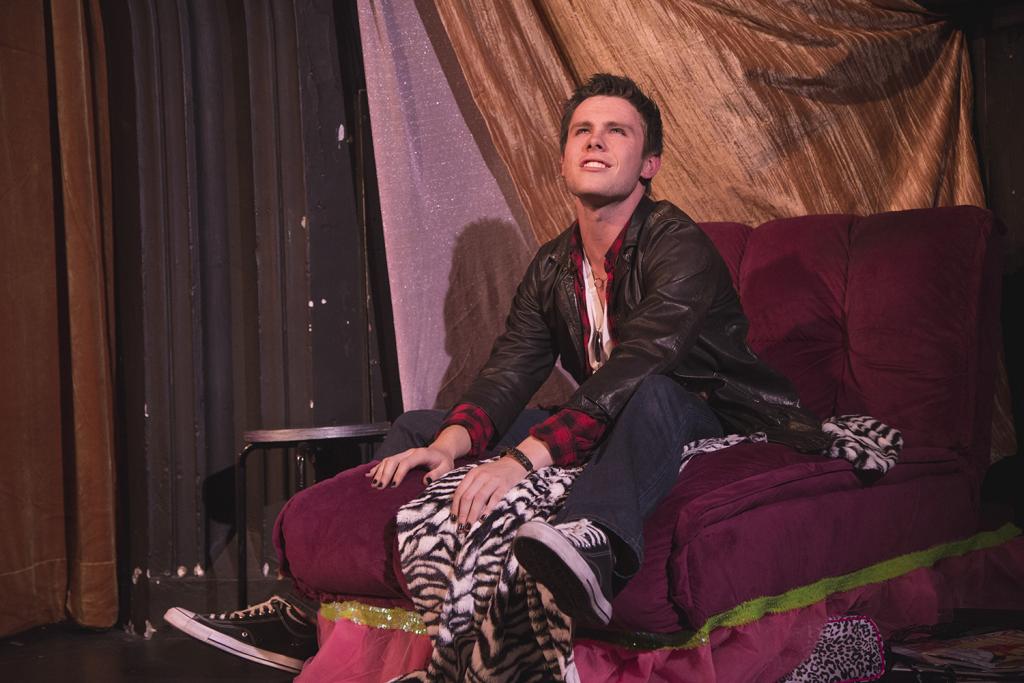 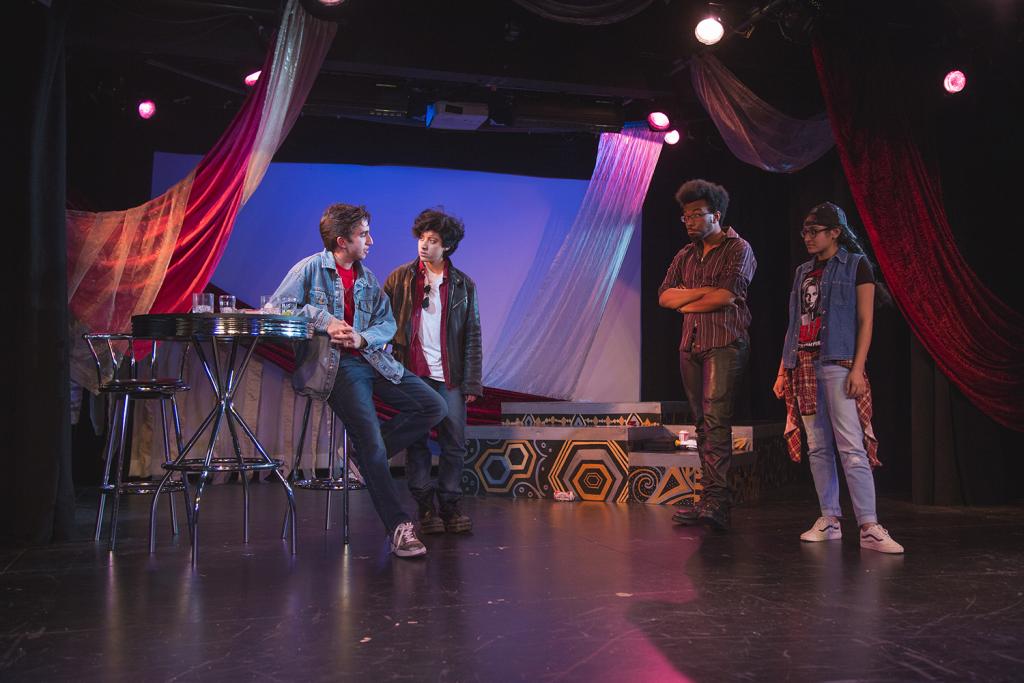 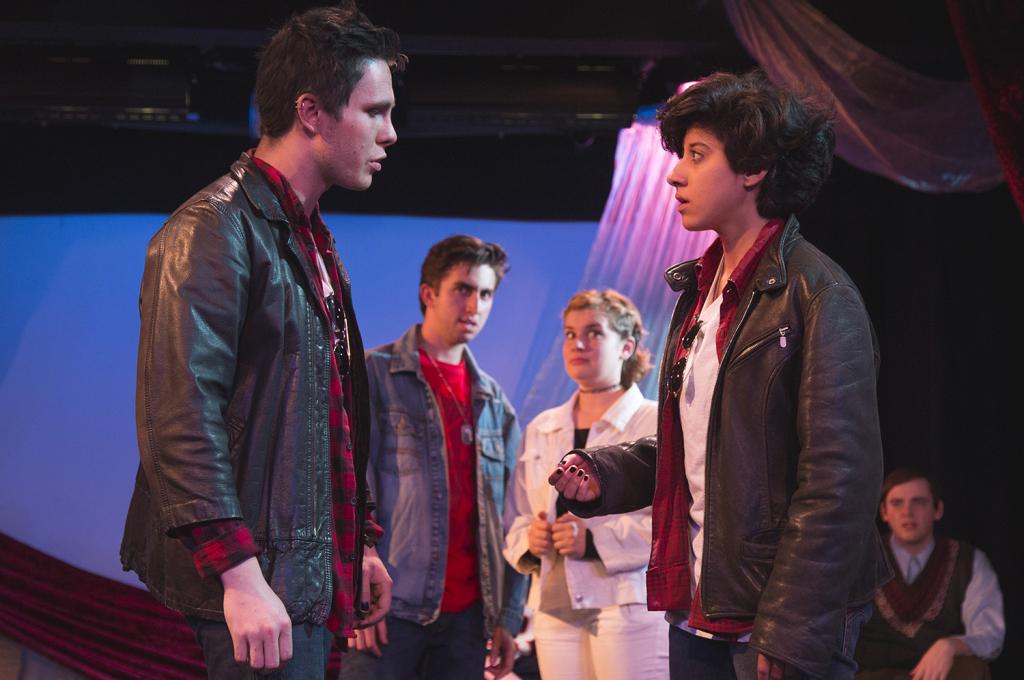 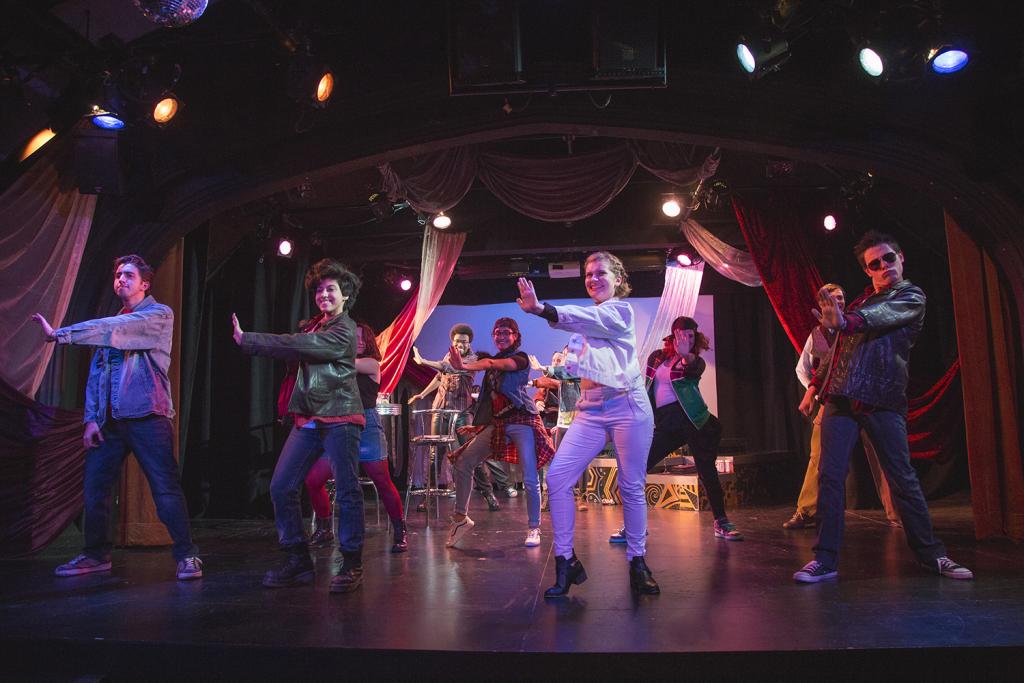 Gender is bent, and friendship found in Shakespeare’s Twelfth Night, presented by the Dean’s Men, directed by Romina Nemaei, a comic tale of love and confusion set in The Nineties— when sucking on a pacifier in homeroom was chic, the Spice Girls were hot, and belly button piercings were unironic.

Sherlock Ziauddin (Viola) is a student in the College.

Jacob Goodman (Duke Orsino) is a first-year in the College majoring in Comparative Human Development and Visual Arts. This is his first UT show.

Laurie Beckoff (Fool/Dance Captain) is a fourth-year English major and returning Dean's Man. Her previous UT credits include Macbeth (First Witch), Cabaret (Helga), As You Like It (Phebe), The Drowsy Chaperone (Choreographer), and workshops. She recently returned from studying abroad at Oxford University, where she appeared in A Midsummer Night's Dream (Puck) and an original work titled Never Mind Where Your Daughter Lies (Laurel). Her summer internship at The Second City included the opportunity to perform in an understudy run of #DateMe. She is also choreographing UT's tenth week production of Urinetown.

David Lovejoy (Sebastian) is not currently a student at the university, nor, then, does he have a major (but once a Dean’s man always a Dean’s man, am I right?). Previous acting credits include Richard II (King Richard), Endgame (Hamm), and Midsummer (Puck); he has also directed an independent production of The Tempest. David is currently a member of the Black Box 2015 Summer ACADEMY ensemble.

Seph Mozes (Sir Toby Belch) is a second-year in the College.  Last year, he played Aumerle in the Dean's Men production of Richard II, as well as co-directed an independent production of The Tempest with David Lovejoy.  Seph looks forward to future shows with the Dean's Men and UT!

Jakob Solheim (Sir Andrew) is a second-year Economics and Public Policy major. He is delighted to be returning to the Dean's Men, having previously appeared in Love's Labour's Lost (Anthony Dull, Mercade). Other credits include UT's Amadeus (Majordomo, Cook, Priest) and CES's Life of Galileo (Galileo).

Amelia Soth (Maria) is a third-year majoring in Near Eastern Languages and Civilizations. She has previously portrayed Rosalind in last quarter's production of Love's Labour's Lost.

Patrick McCarthy (Malvolio) is a third-year in the College majoring in English and Linguistics. He has previously appeared as Ken in Rumors.

Saisha Talwar (Valentine) is a first-year in the College and is a perspective Global Studies major. She is very excited to be starting off her UChicago experience by joining UT!

Eleanor Clifford (Barkeep) is a fourth-year in the College majoring in History, Philosophy, and Social Studies of Science and Medicine. Previous acting credits include Love's Labour's Lost (Maria), Hedda Gabler (Hedda), Henry VI (Rutland), and The Real Thing (Annie). She has directed two shows with UT, Fifth Planet and First Love. She is exceedingly proud to be the senior-most Dean's Man in the cast, and serves as Curatorial Coordinator on TAPS Student Staff.

Romina Nemaei (Director) is a third-year in the College majoring in Political Science and TAPS. Past UT show credits include This Is How It Goes (Deck Chief), Fifth Planet (Stage Manager), and Macbeth (Assistant Stage Manager). She sincerely hopes you enjoy the disco ball as much as she does.

Dan Lastres (Sound Designer / Composer) is a second-year Music and English major. This is his third Dean's Men show including Love's Labor's Lost and Richard II, and he is a performing member of Occam's Razor.

Cynthia Campos Costanzo (Costume Designer)  is a fourth-year in the College studying TAPS and Biology. She has assisted with costumes for Much Ado About Nothing (Spring '14) and Henry V (Fall '14) and assisted with sound for Cowboy Mouth (Winter '15). She was a puppeteer for Myra Su's BA project (Spring '13) and has also designed puppets for CES's Iron Bridal Feast (Spring '14) and Galileo (Fall '14). In addition, she has written for New Work Week (Breckinridge, Spring '13) and participated in Theater 24 (Winter '13, Fall '15).

Felicia Rustandy (Production Manager) is a third-year in the College majoring in Biological Sciences. Twelfth Night is her third UT show and first Dean's Men show. Previously, she has been part of the production management team for Amadeus and Rumors.

Brandon McCallister (Stage Manager) is a second-year in the College majoring in Biology. Previous credits include Henry V and Richard II (Assistant Stage Manager) and Love's Labour's Lost (Assistant Director). He is excited to be back and looks forward to working on future productions.

Michael Roy (Master Electrician) is a fourth-year Chemistry major. He has been a part of Team Lights on several past UT productions and is thrilled to add Twelfth Night to his list.

Adam Johnson (Dramaturg) is a third-year in the College. Selected credits include Urinetown (Mr. Cladwell), The Effect of Gamma-Rays on Man-in-the-Moon Marigolds (Director), Macbeth (Dramaturg), Talk to Me... (Director), and Grey Gardens (Major Bouvier).

Abby Adams (Props Master) is a student in the College.

Laura Bevington (Assistant Director) is a student in the College.

Christina Cano (Assistant Production Manager) is a first-year in the College majoring in History and Political Science. This is her first involvement with UT. Christina is a new member of Dean’s Men.

Michelle Noyes (ASM) is a first-year in the College majoring in Biochemistry. This is her first show.

Elijah Wolter (Assistant Composer) is a second-year in the College majoring in Anthropology and minoring in Music and Slavic Languages & Literatures. Elijah is a member of The Occam's Razor Improv-Comedy Troupe.

Alexander Lecocq (Assistant Lighting Designer) is a third-year in the College, majoring in History. Twelfth Night is vis first experience with theater in almost a decade.

Margot Carlson (Assistant Set Designer) is a first-year student planning to major in Psych and GNSE. This is her first UT show and she is so excited to be a Dean's Man!

Coriander Mayer (Assistant Set Designer) is thrilled to bedeck the FXK in yards and yards of shiny pretty things. This is her first time working on set design, though she's directed, lighting design'd, acted, and electrician'd previously. Cori is a second-year TAPS and English major in the College.

Radhika Kaicker (Assistant Costume Designer) is a student in the College.

Beth Elingboe (Assistant Props Master) is a student in the College.

Clair Fuller (Assistant Props) is a fourth-year in the the College majoring in Gender & Sexuality Studies and English. While she has previously performed in many shows with UT, The Dean's Men, and other student organizations, this is her first experience in technical theater, borne out of a desperate desire to justify her initially accidental inclusion on the Twelfth Night staff listhost.

Lexi Turner (committee liaison) is a third-year in the College studying Theater and Performance Studies and Classics. She has acted in multiple UT and Dean's Men Productions (including Hedda Gabler, Richard II, and Rumors), and directed her original piece Woman on Trial for the Fall 2015 Weekend of Workshops. She is also a ensemble and board member of UChicago Commedia.

Jon Sorce (Dean’s Men Board Liason) is a student in the College.