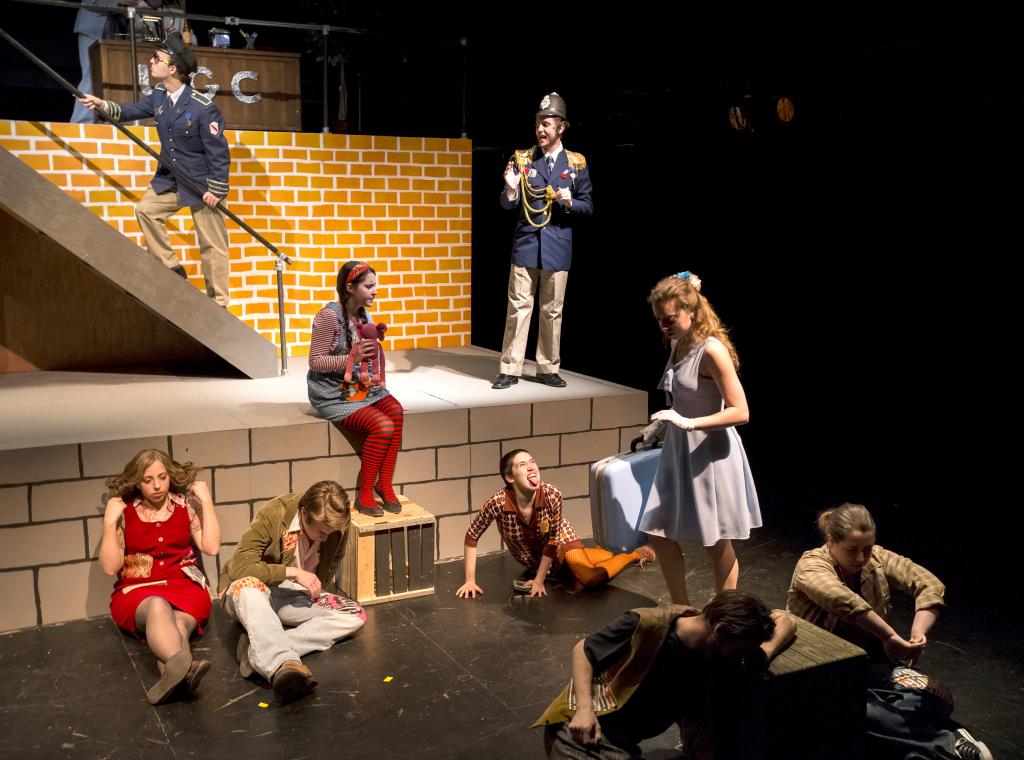 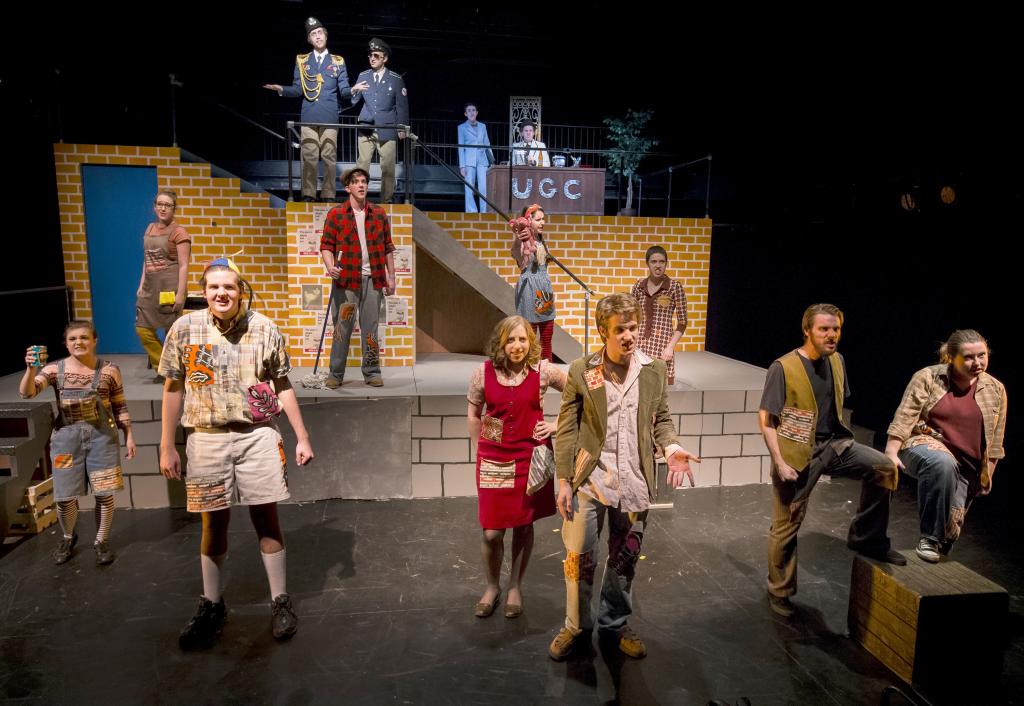 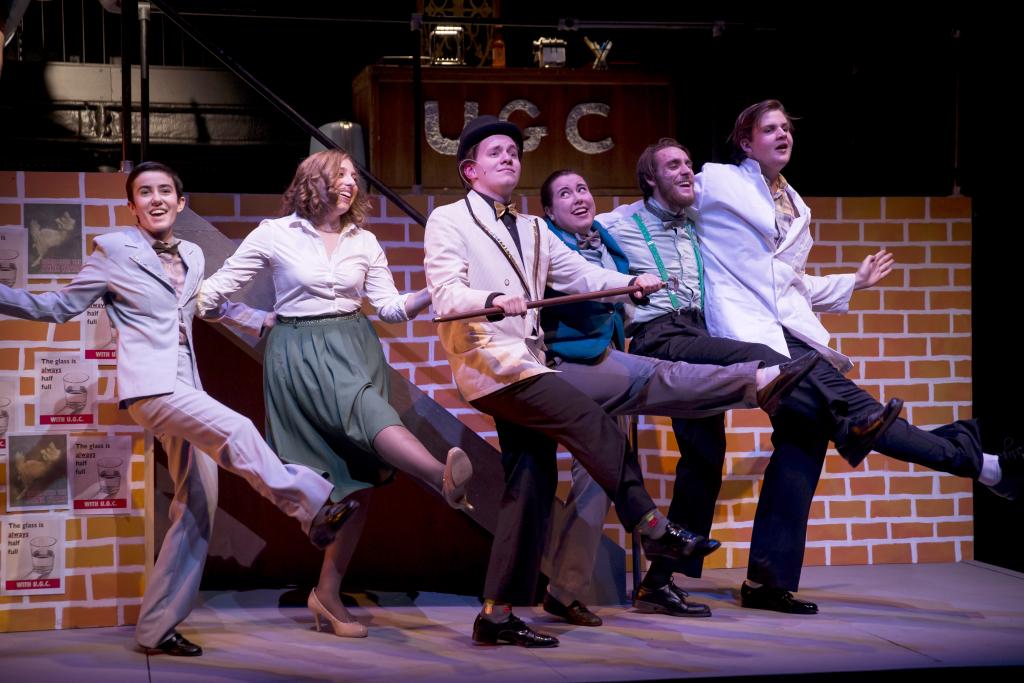 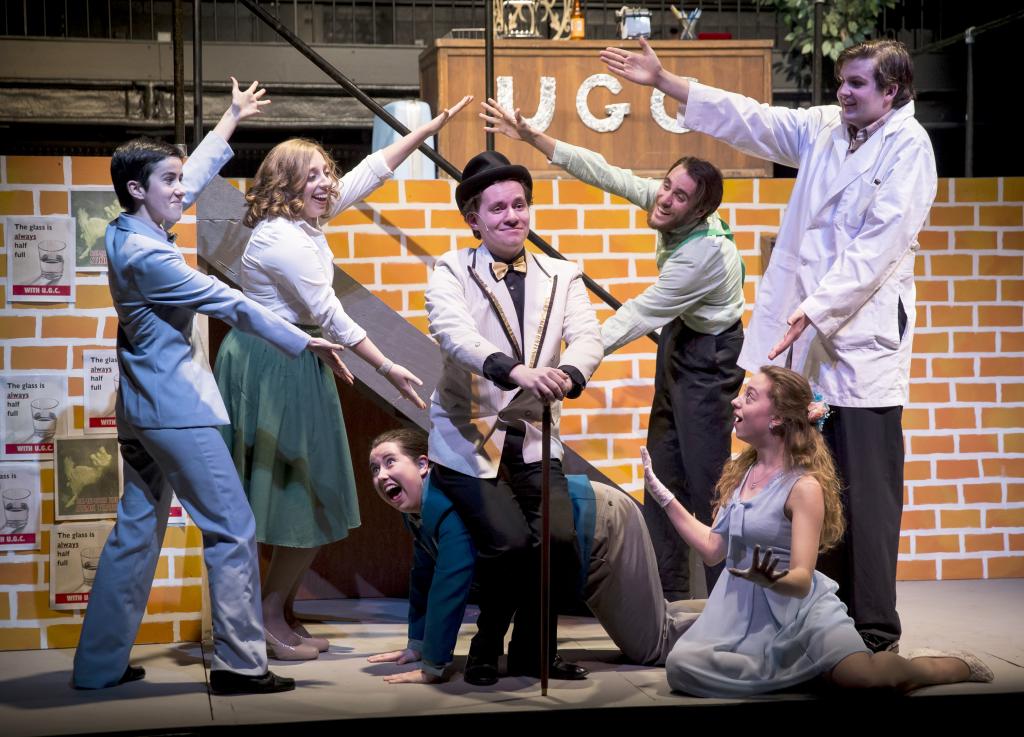 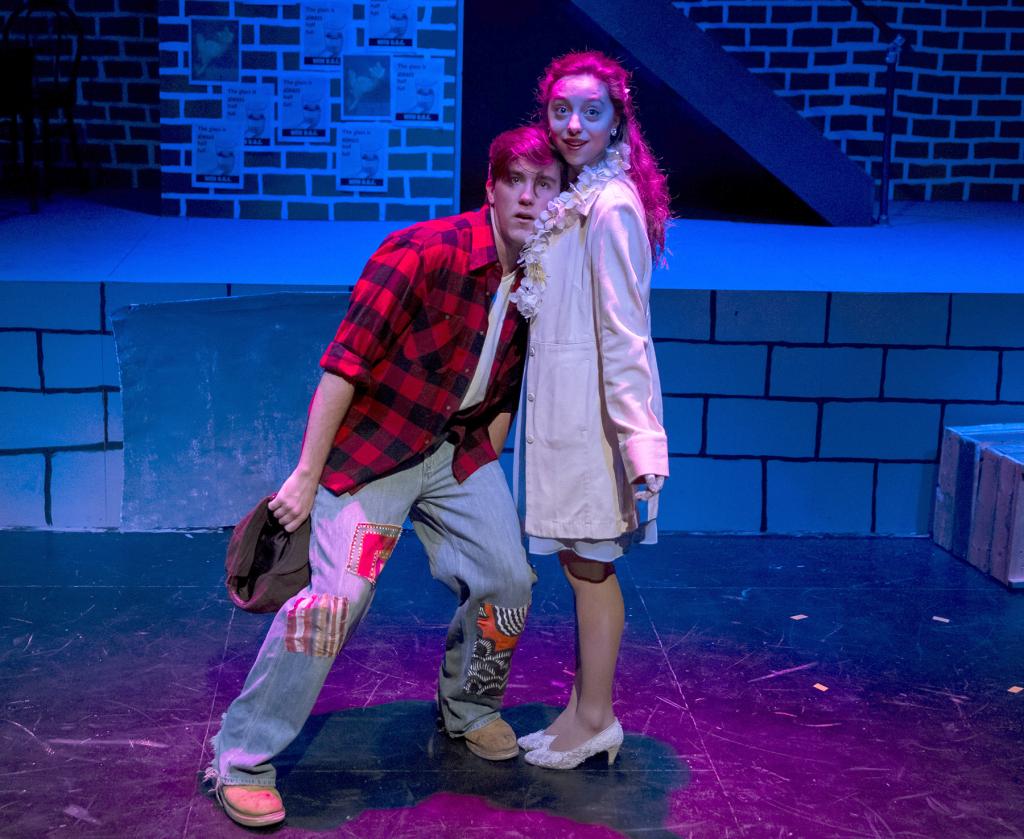 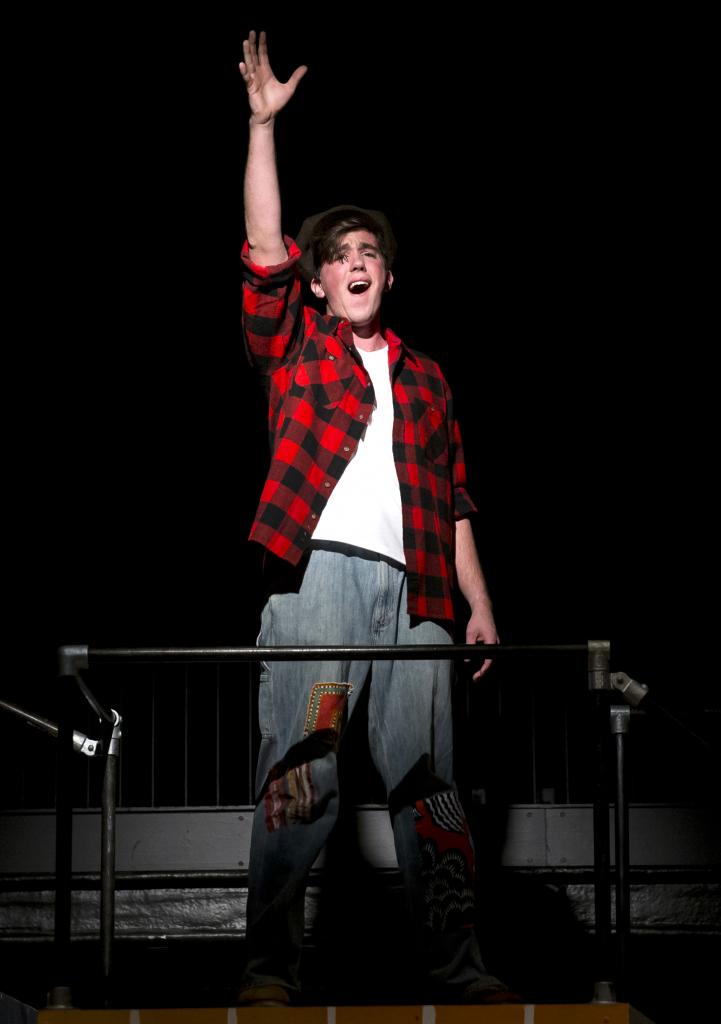 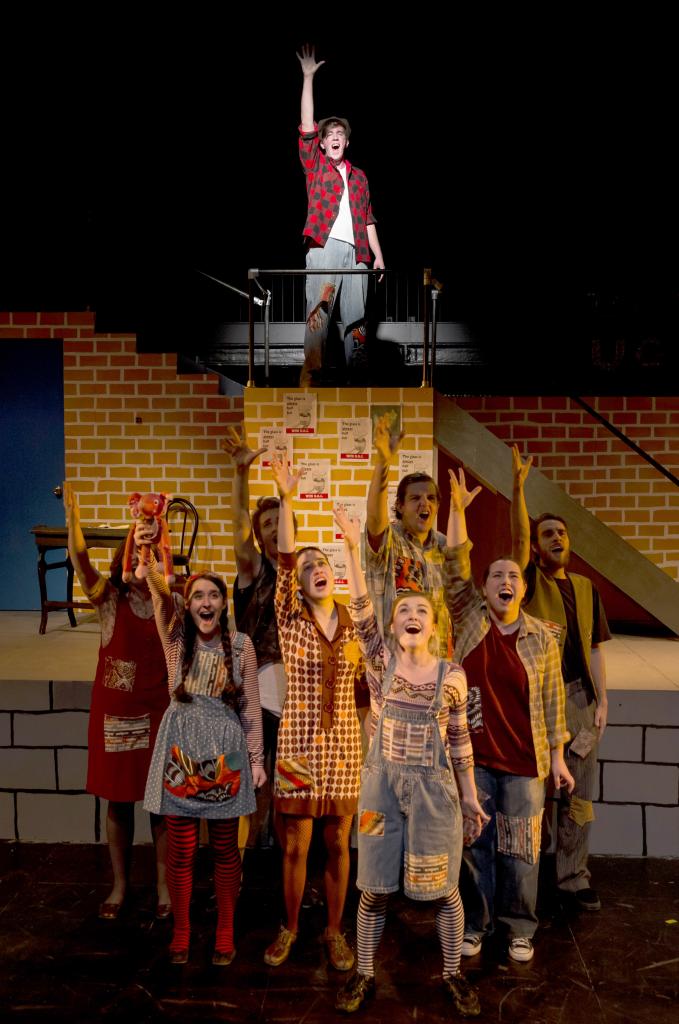 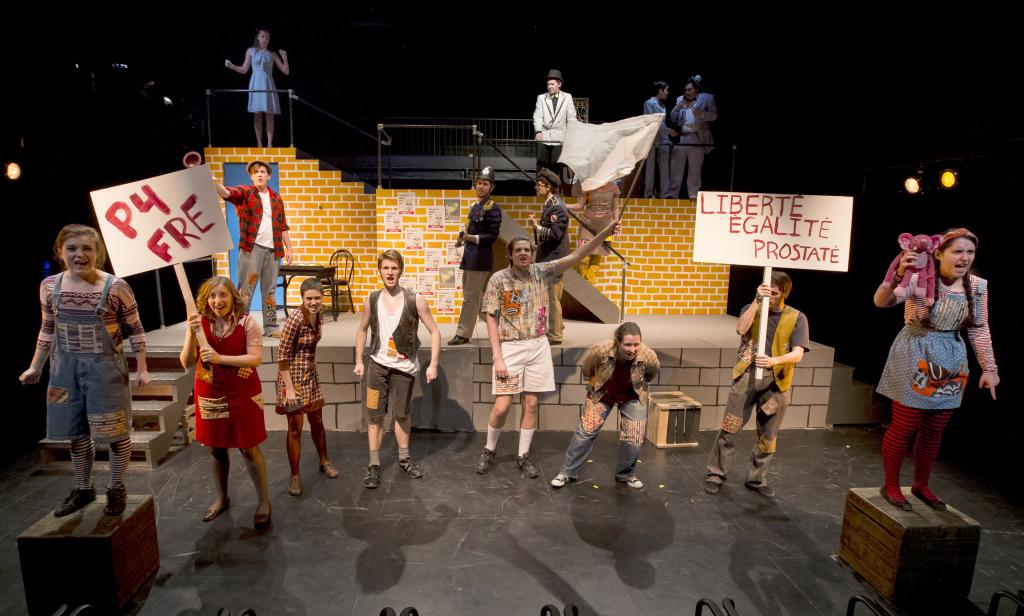 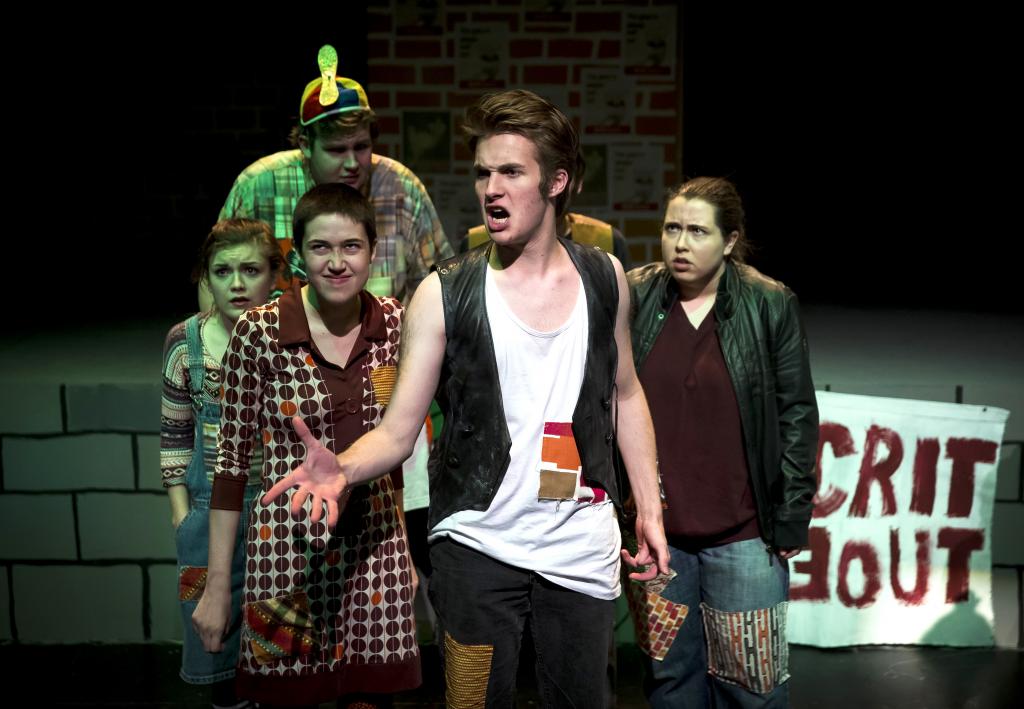 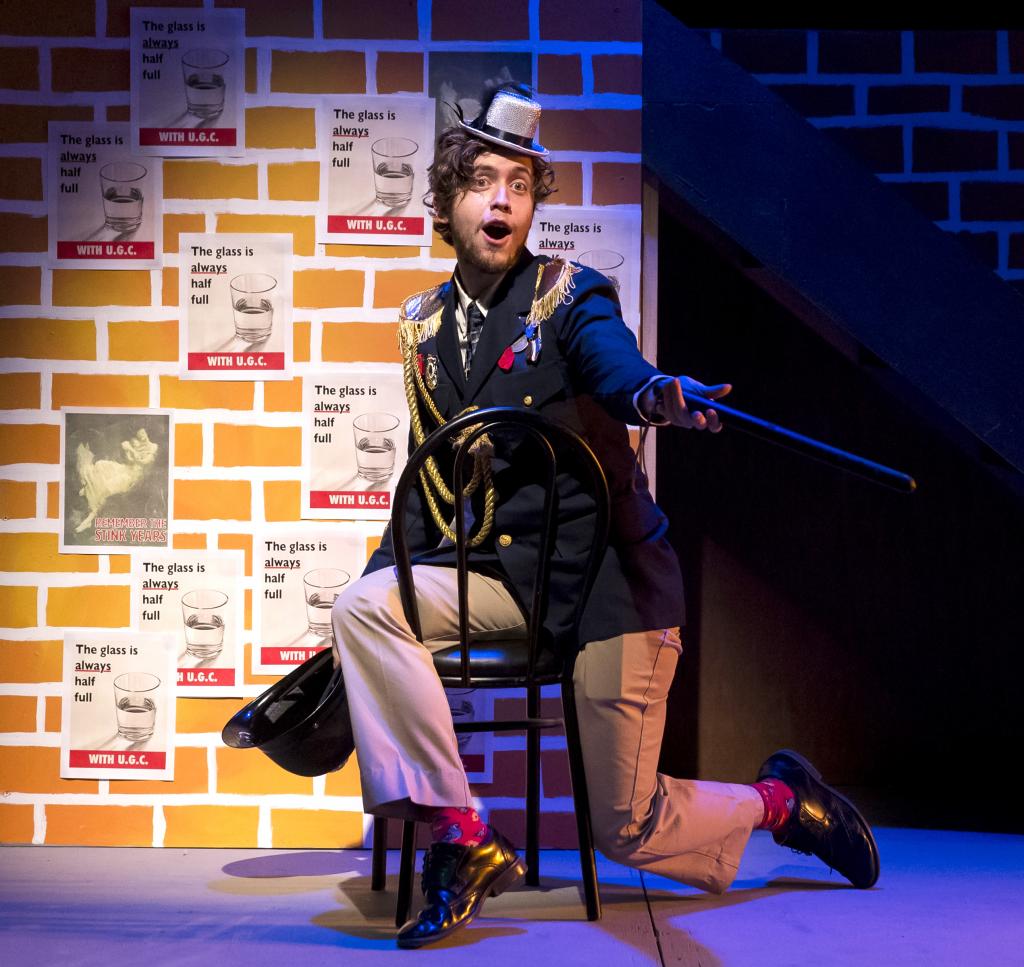 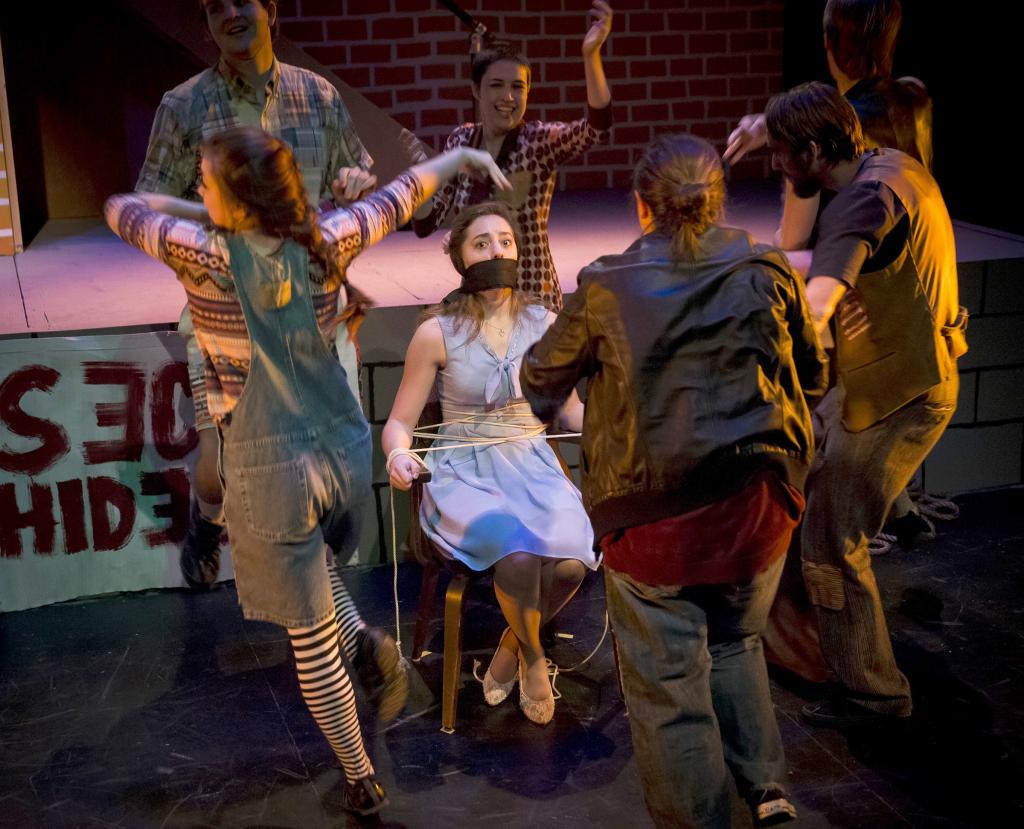 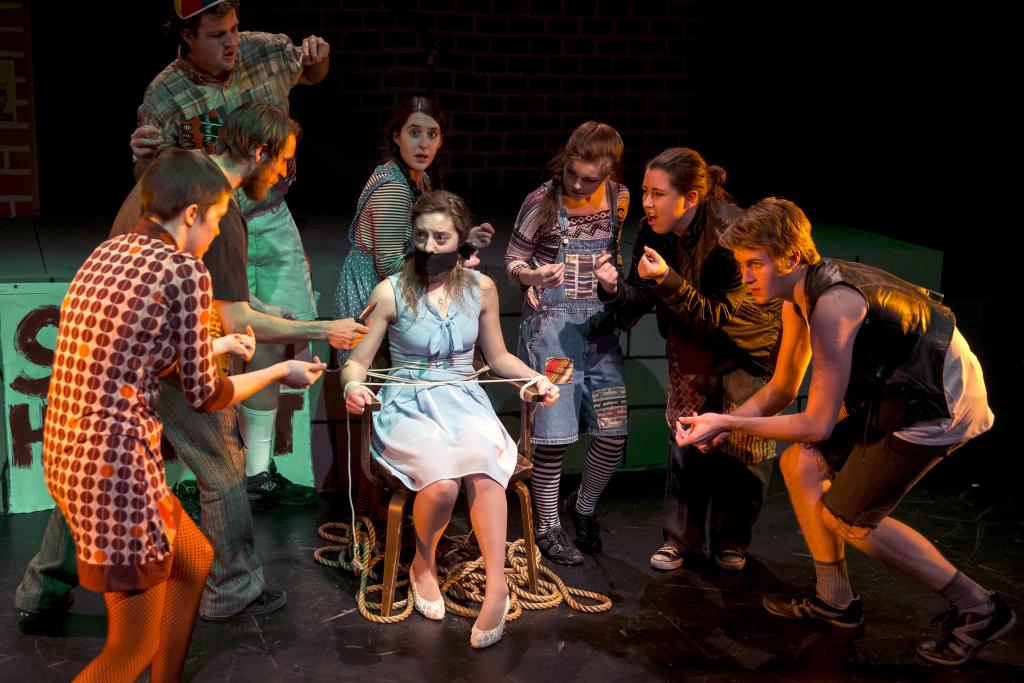 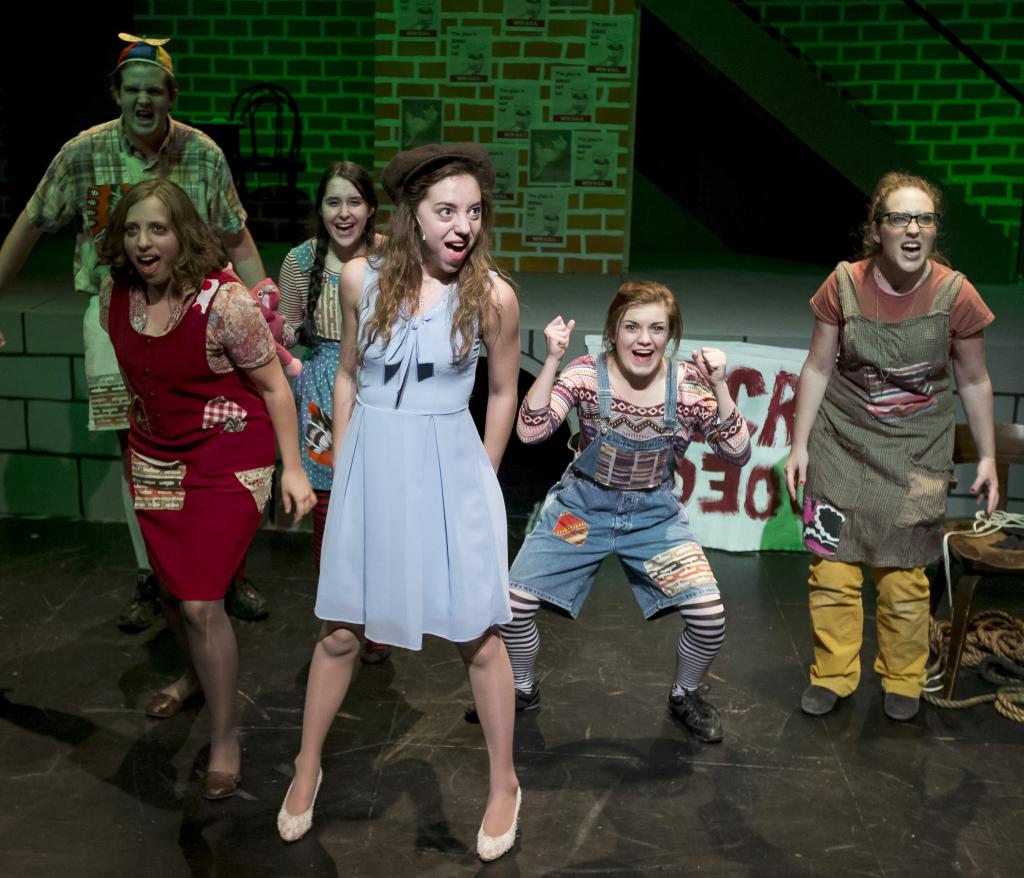 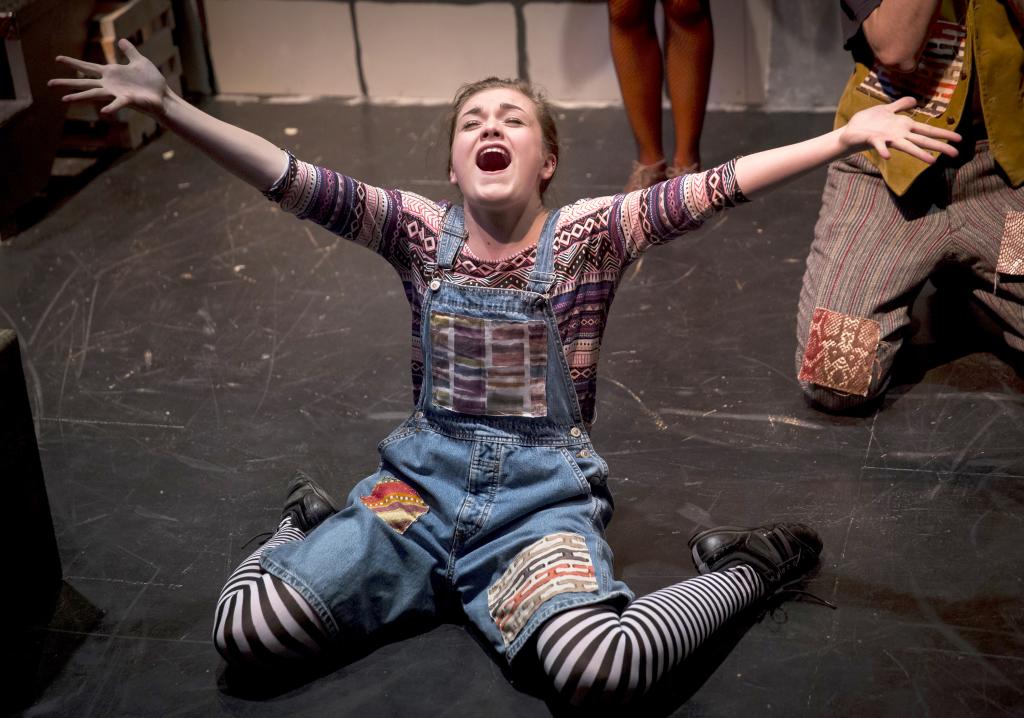 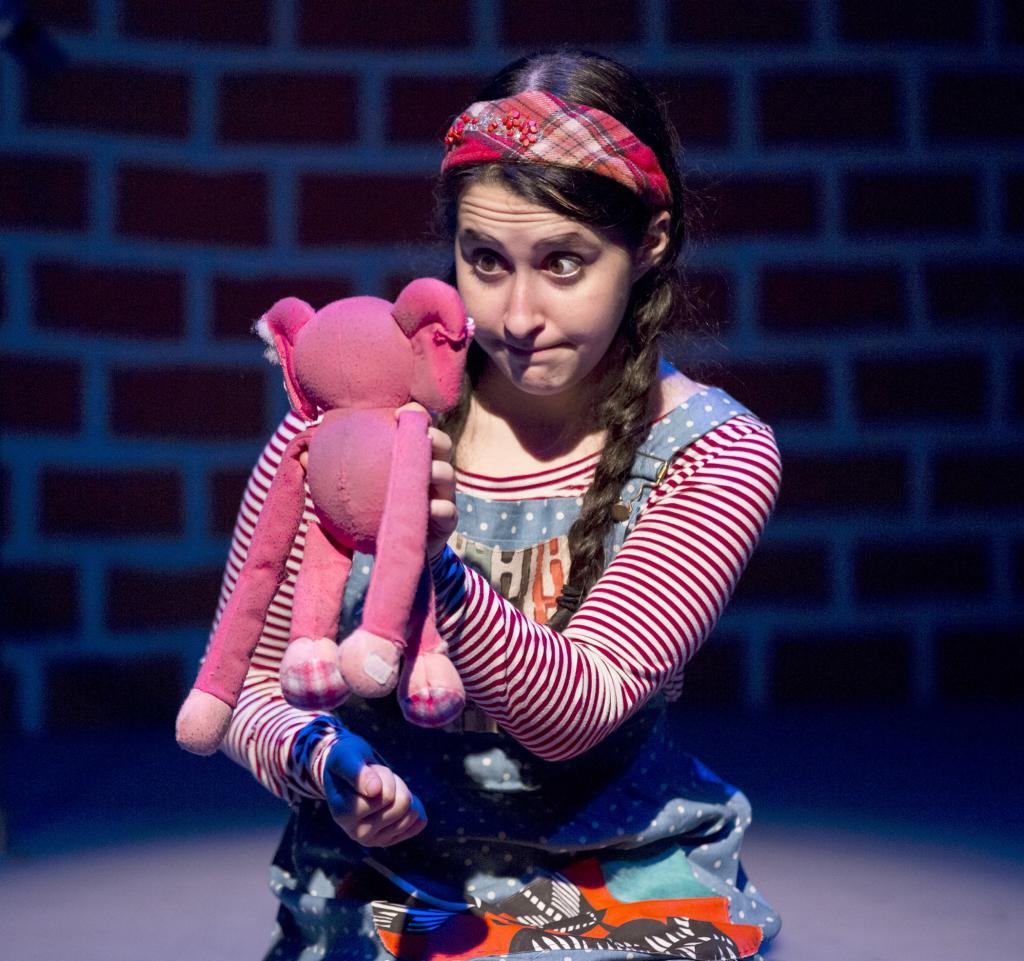 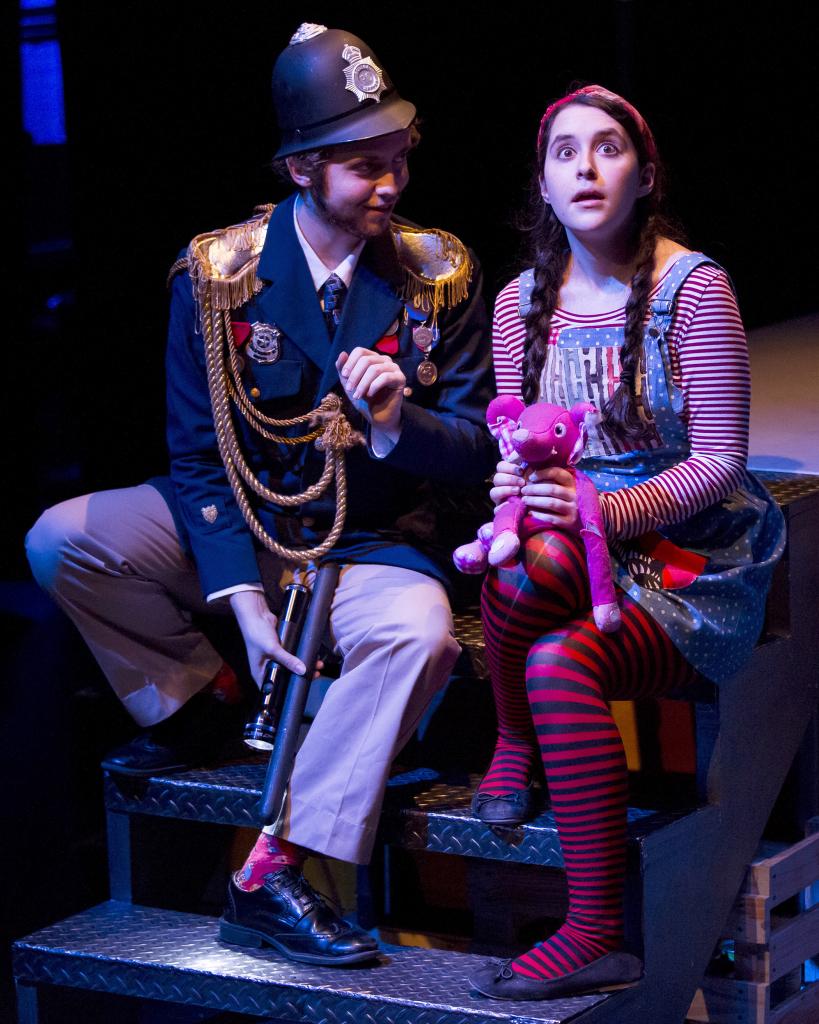 With music and lyrics by Greg Kotis and book and lyrics by Mark Hollmann, Urinetown, directed by Josh Harris, invites us to a world not so unlike our own. Where water is in short supply, peeing is at a premium, and nothing is more serious than the jokes. Social irresponsibility, capitalism, the legal system, and society itself are stirred up when the status quo is confronted with a splash of the ridiculous.

Quinn Kane (Bobby Strong) is a first year in the college, and a prospective Classics major. This is his first time in a UT production.

Maggie Strahan (Hope Cladwell) is a second-year in the College majoring in TAPS. Previous acting credits with University Theatre include Amadeus (Teresa), Talk to Me Like the Rain and Let Me Listen (Woman), and Love's Labour's Lost (Jaquennetta) with the Dean's Men.

Emily Benjamin (Pennywise) is a fourth-year in the College majoring in Comparative Human Development with a minor in Music. Previous acting credits include Fiddler on The Roof (Tzeitel), Footloose (Urleen), and Children of Eden (Generations Soloist). This is Emily's first acting opportunity at UChicago.

Adam Johnson (Mr. Cladwell) is a third-year in the College. Previously with UT he has acted (Grey Gardens, Amadeus), directed (The Effect of Gamma Rays on Man-in-the-Moon Marigolds, Talk to Me Like the Rain and Let Me Listen...), and dramaturged (Macbeth, Twelfth Night).

Ali Futter (Little Sally) is a first-year in the College and is very excited to be in her first UT production. She is also a member of the a cappella group Rhythm and Jews.

Alex Hearn (Officer Lockstock) is a third-year in the College studying Public Policy and TAPS. Previous acting credits are Suburbia (Jeff), Endgame (Nagg), and A Streetcar Named Desire (Steve). He is the Secretary of UT Committee.

Michael Procassini (Officer Barrel) is a fourth-year in the College, majoring in Biology and specializing in Endocrinology. Some previous credits include acting in The Drowsy Chaperone and Sensory Designing in Hotel Nepenthe.

Derek Chan (Senator Fipp/Boy Cop) is a third-year in the College majoring in Psychology. Previous acting credits include Trying to find Chinatown (Ronnie), CroMagnum (Pangrati), and UofC Commedia (Stupino). Derek is also a member of Chicago Rhythm and Jews and Chicago Men's A Capella (CMAC).

Clair Fuller (Mr. McQueen) is a fourth-year in the College majoring in Gender & Sexuality Studies and English. She has a storied history of portraying male villains with UT, the Dean's Men, and other campus performance groups.

Ariella Kasmer-Jacobs (Josephine Strong/Mrs. Millenium/Cop), is a fourth-year Anthropology major and TAPS minor in the College. University Theater credits include The Twelve Dancing Princesses (Princess 11), The Drowsy Chaperone (Assistant Director) and New Work Week 2015 (Director). She has also worked on Classical Entertainment Society's Pygmalion and Galatea (Myrine), Doctor Horrible's Song Along Blog (Bad Horse Crony, Fangirl) and Medea (costume designer). She is a member of UChicago's premier Jewish a cappella group, Rhythm and Jews, and occasionally dances with RBIM and the Ballroom and Latin Dance Association.

Larkin Smith (Soupy Sue) is a first-year prospective Philosophy major. This is her first show with UT, and she could not be more excited! You can also see her perform with the University's co-ed a cappella group 'The Ransom Notes'.

William Spencer Shore (Tiny Tom/Dr. Billeaux) is a second-year in the college majoring in Physics. In addition to Urinetown, Will has played Officer Welch in Rumors and is a member of the a Capella group Rhythm and Jews.

Henry Stone (Robbie the Stockfish, UGC Exec #1) is a graduate of the College and first-year MPP student at the Harris School of Public Policy. He has previously acted in Number the Stars (Uncle Henrik), Fiddler on the Roof (Chorus), Les Miserables (Army Officer), and Guys & Dolls (Angie the Ox).

Katy Surhigh (Billy Boy Bill/UGC Exec #2) is a second-year potential Linguistics and/or TAPS major. This is her first time acting in a mainstage UT show, having previously assistant costumed designed for last spring's production of Rumors. On campus, she also sings a cappella with Rhythm and Jews and serves as their publicity chair.

Joshua Sonny Harris (Director) is a fourth-year in the college majoring in TAPS and English. He has worked on fifteen previous UT and CES productions, as a Director, Music Director, Writer, Actor, Composer, and Sound Designer. Some highlighted credits include writer and director of croMagnum, composer and sound designer of Cowboy Mouth and As You Like It, director of Eh Joe, and Captain Hammer in Dr. Horrible. Josh is also the assistant music director and a music arranger for the acappella group Rhythm and Jews.

Corson Barnard (Vocal Music Director) is a third-year in the College majoring in TAPS and minoring in Norwegian Studies. Previous experience includes two years as the assistant music director for The Ransom Notes, a co-ed a cappella group on campus. This is her first show with University Theater.

Adam Bierstedt (Conductor) is a third-year in the College majoring in Medieval Studies. He has been playing instruments for over a decade, and has previously been in the pit band for Crazy For You.

Laurie Beckoff (Choreographer) is a fourth-year English major. Her previous UT credits include Twelfth Night (Fool/Dance Captain), Macbeth (First Witch), Cabaret (Helga), As You Like It (Phebe), The Drowsy Chaperone (Choreographer), and workshops. She recently returned from studying abroad at Oxford University, where she appeared in A Midsummer Night's Dream (Puck) and an original work titled Never Mind Where Your Daughter Lies (Laurel). Her summer internship at The Second City included the opportunity to perform in an understudy run of #DateMe. She is trained in tap, jazz, musical theatre, ballet, lyrical, contemporary, and modern dance, and has choreographed for and performed with Rhythmic Bodies in Motion.

M.C. Steffen (Dramaturg) is a third-year TAPS major. He has worked with UT as an actor (The House of Yes) and director (Sleuth, Smitten). He has also directed for the Classical Entertainment Society (An Apology for the Course and Outcome of Certain Events Delivered by Doctor John Faustus on This His Final Evening). He is currently preparing to direct UT's Winter '16 production of Belleville.

Claire Haupt (Production Manager) is a third-year majoring in Theater and Performance Studies with a focus in Production Management. Claire has worked most recently with Steppenwolf Theater Company as their Production Management Intern and has production managed several University Theater shows including Cabaret, Closer, and The Effect of Gamma Rays on Man-In-The-Moon Marigolds. She thanks her family (and Tess and Molly) for their never ending love and support.

Jacob Mulcahy (Scenic Designer) is a fifth-year in the College majoring in Mathematics. Previous scenic design and carpentry credits include This Is Our Youth, The Merchant of Venice, Hedda Gabler, Godspell, Sleuth, Endgame, Cowboy Mouth, and The Effects of Gamma Rays on Man-in-the-Moon Marigolds.

Rileigh Luczak (Lighting Designer) is a second-year in the College majoring in Mathematics. Previous lighting credits include This is How it Goes (Asst. Design) and Amadeus (Master Electrician). She also has experience in stage management in both University Theater (Closer) and Le Vorris & Vox (Winter's Thaw, The Monkey King). Rileigh is a technician for the FXK Theater.

Lauren Saunders (Costume Designer) is a fourth-year Physics major, specializing in Astrophysics. She has previously designed costumes for Rumors, Sleuth, CroMagnum (CES Fest), Hedda Gabler, and the Credeaux Canvas, and has been a frequent participant in Theater[24].

Coriander Mayer (Master Electrician) is a second year TAPS and English major in the College. Most recently, Cori directed The Candles and was a set design assistant for Twelfth Night. Since coming to Chicago, Cori has also acted (UT, Two Brothers), lighting designed (UT, Commedia dell Arte, Madison Street Theater), and improvised (Annoyance Theater, The Second City). This production brings back fond memories of that one time she did Urinetown in high school.

Megan Philippi (Assistant Director) is a second-year in the College. Last year, she directed Rabbits for New Work Week and worked on Endgame as assistant set designer.

Leilani Douglas (Assistant Choreographer) is a third year public policy major. She dances with and choreographs for Maya. She previously appeared in UT/TAPS presents Cabaret as Texas.

Jackson Ruzzo (Assistant Dramaturg / Bass Player) is a third year major in the college. He is an actor, director, bass player, and assitant dramaturg. He would like to thank Urinetown Management for helping him keep his life together throughout the quarter.

Patrick Doyle (Assistant Production Manager) is a first-year in the College. This is his first University Theater Production. Previous theatre experience includes eight musicals with Central Catholic Masque including Spamalot and Mary Poppins for which he served as Stage Manager. Patrick would like to thank Claire for all of her guidance, and the entire company of Urinetown for all of the amazing work they have done.

Olivia Malone (Assistant Stage Manager) is a first year prospective computer science major. This is her first University Theater production. She would like to thank Sarah for all of her guidance, and the entire company of Urinetown for all of the amazing work they have done.

Natalie Kessler (Assistant Lighting Designer) is a first-year in the College majoring in Global Studies. This is her first UT production.

Cameron Robertson (Assistant Costume Designer) is an undecided first-year in the College. Previous technical theater credits include Oklahoma!, The Cherry Orchard, Hairspray, Company, and As You Like It.

Kriza Sy (Assistant Costume Designer) is a student in the College.

Stephanie Slaven-Ruffing (Assistant Sound Designer) is a second-year in the College majoring in Anthropology and Comparative Human Development. Her previous sound experience includes House of Cards, the workshop The Fear, Suburbia, The Effect of Gamma Rays on Man in the Moon Marigolds and SAMSU’s 2015 cultural show Apartment Complex. She has also worked on Fifth Planet and Closer.

Angela Lin (Pianist) is a fourth-year Statistics and Economics major. This is her first UT show!

Olivia De Keyser (Reeds Player) is a second-year undergraduate student majoring in Linguistics and East Asian Languages and Civilizations. This is her fifth time in a pit orchestra playing more than one reed instrument (but not at the same time).

Michael Allara (Trombone player) is a first-year intending to major in Biology and English. He recently remembered he can play an instrument, and is excited to be a part of his first musical.

Sarah Weiswasser (Drummer) is a first-year in the College and is a prospective Economics major. Sarah has drummed in numerous rock bands including Small Victories and Zenith.