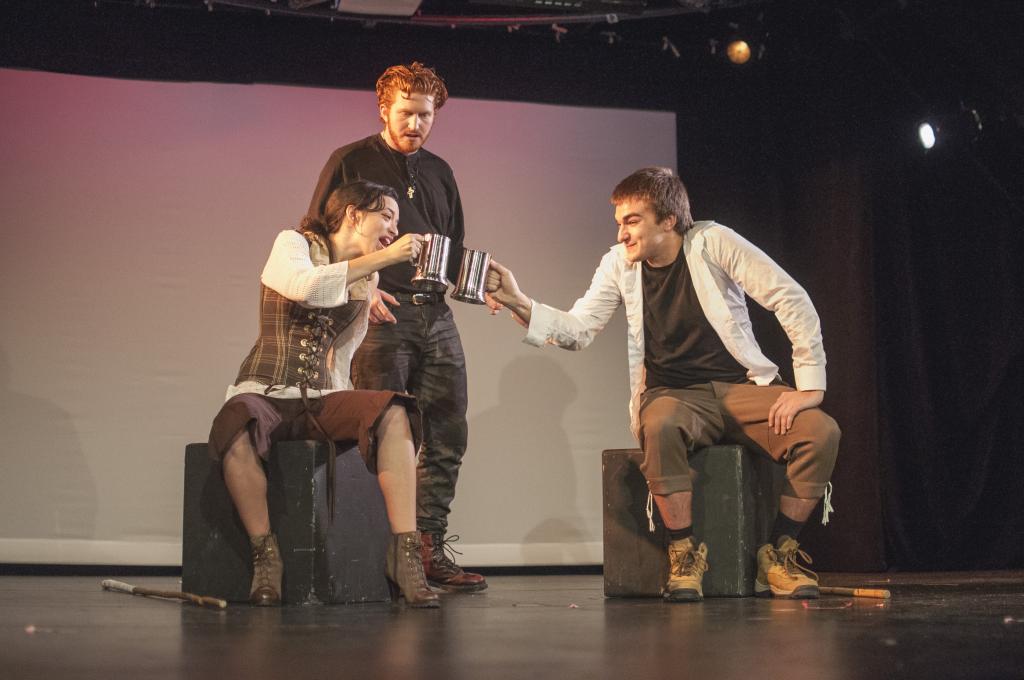 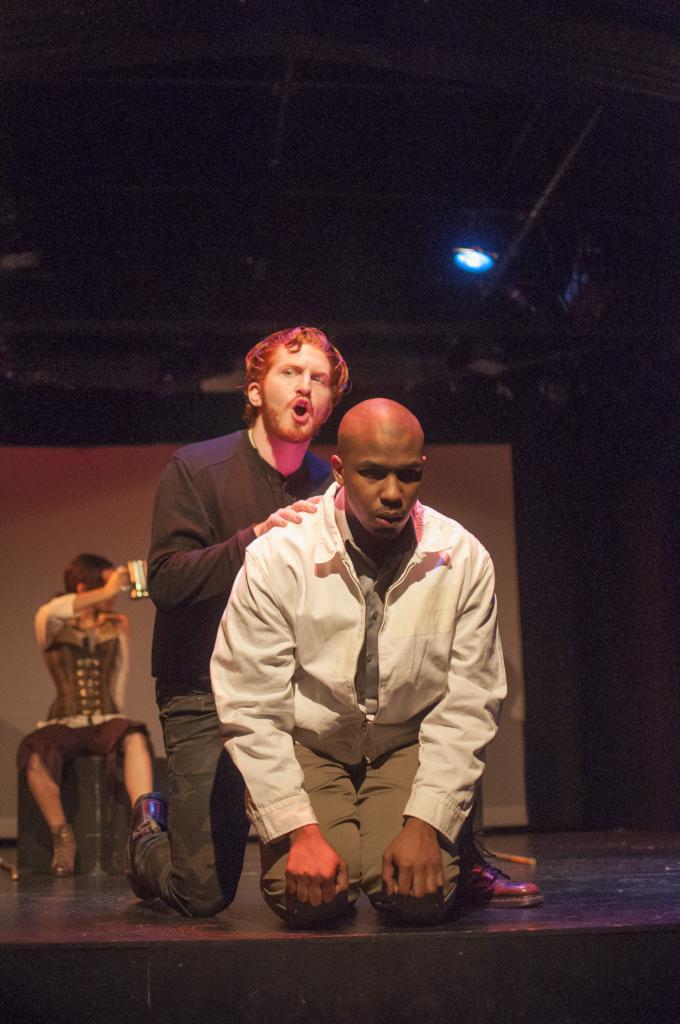 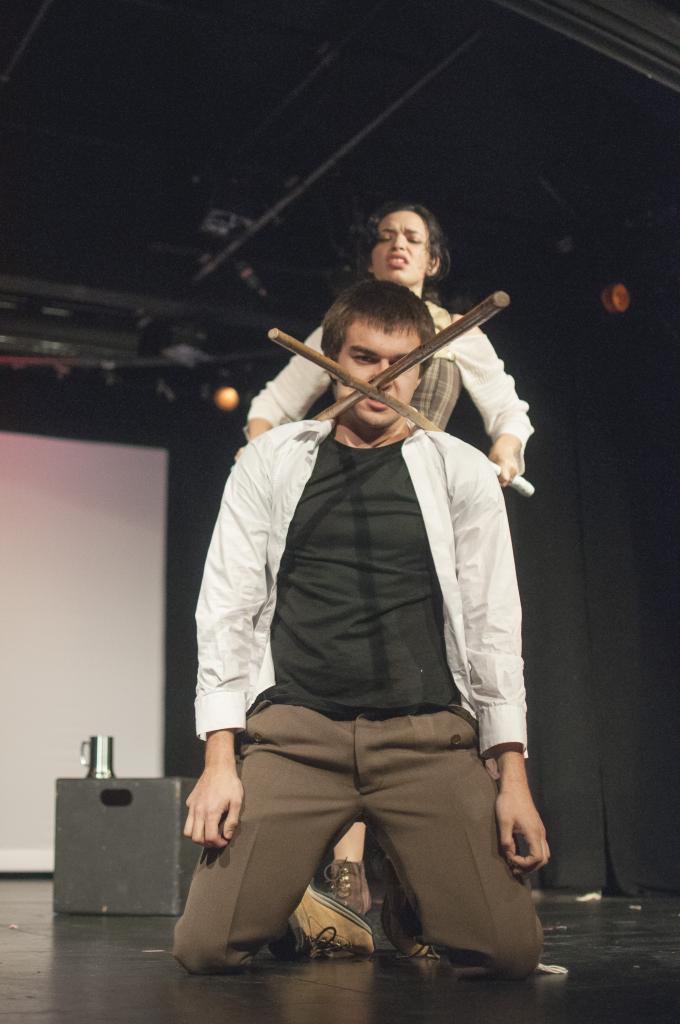 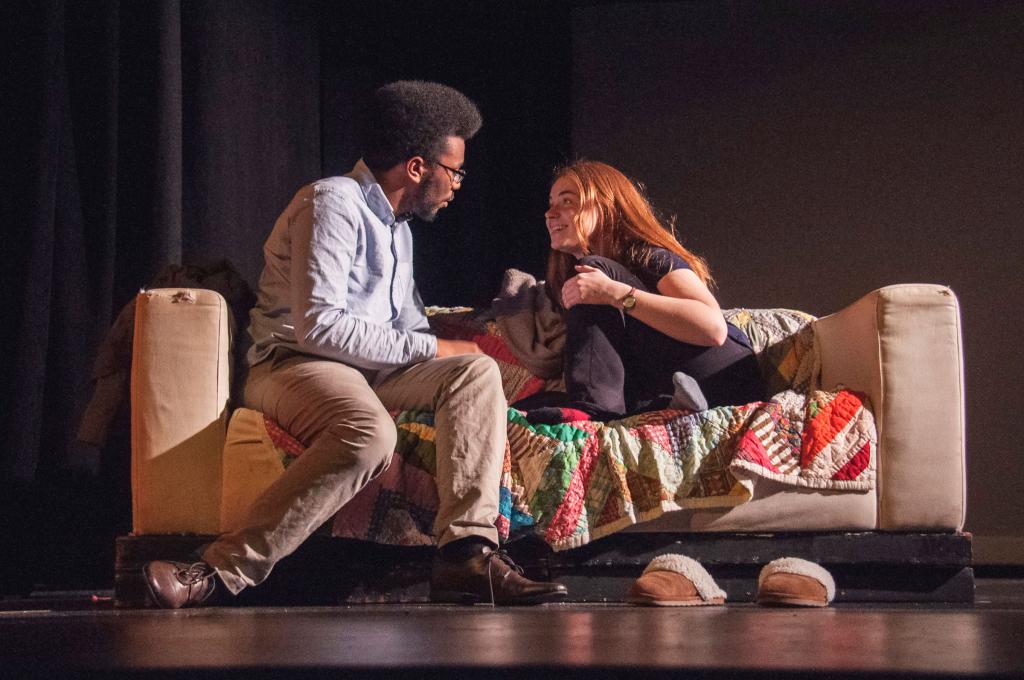 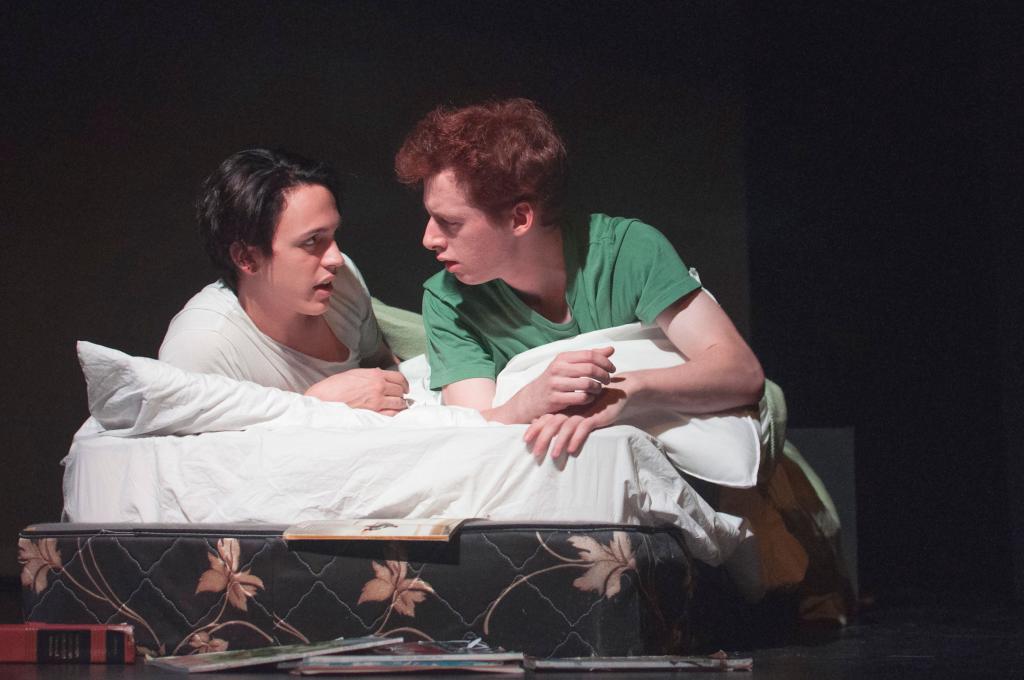 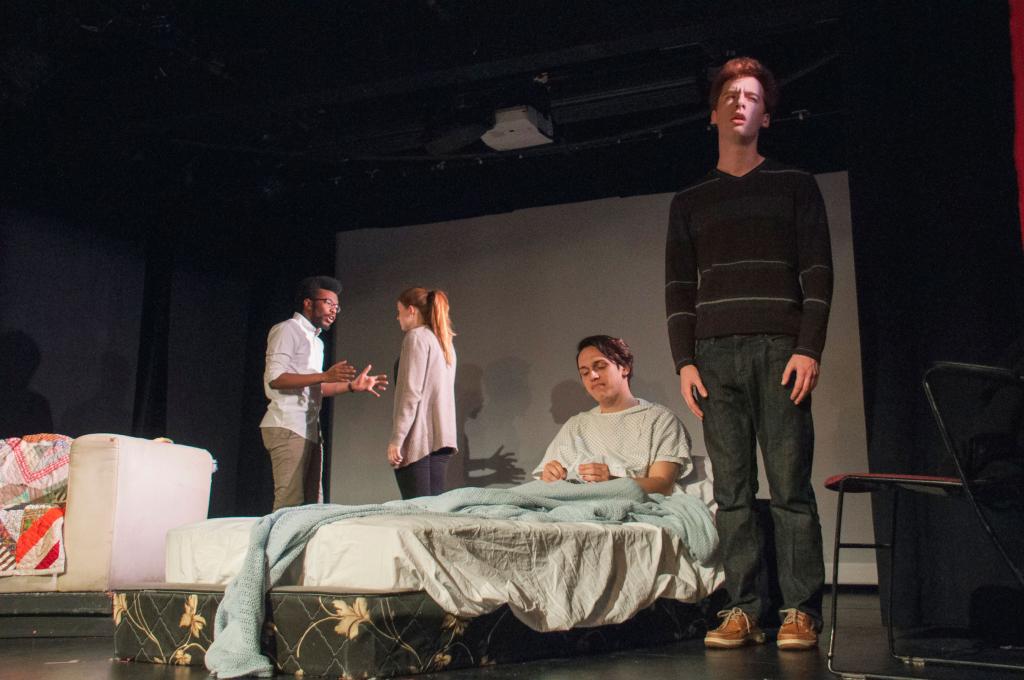 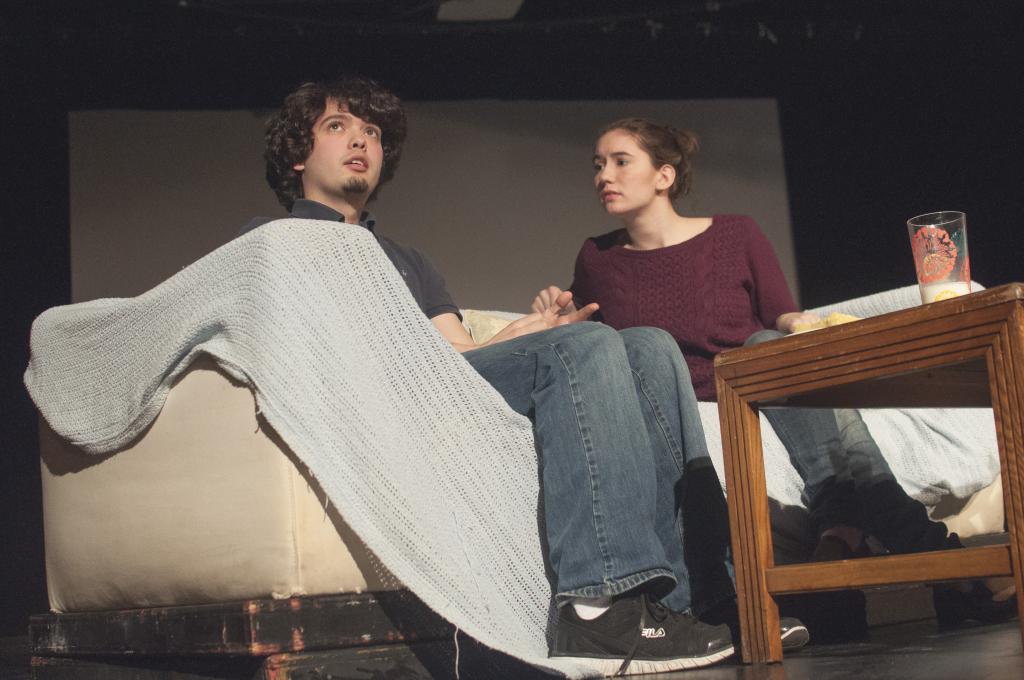 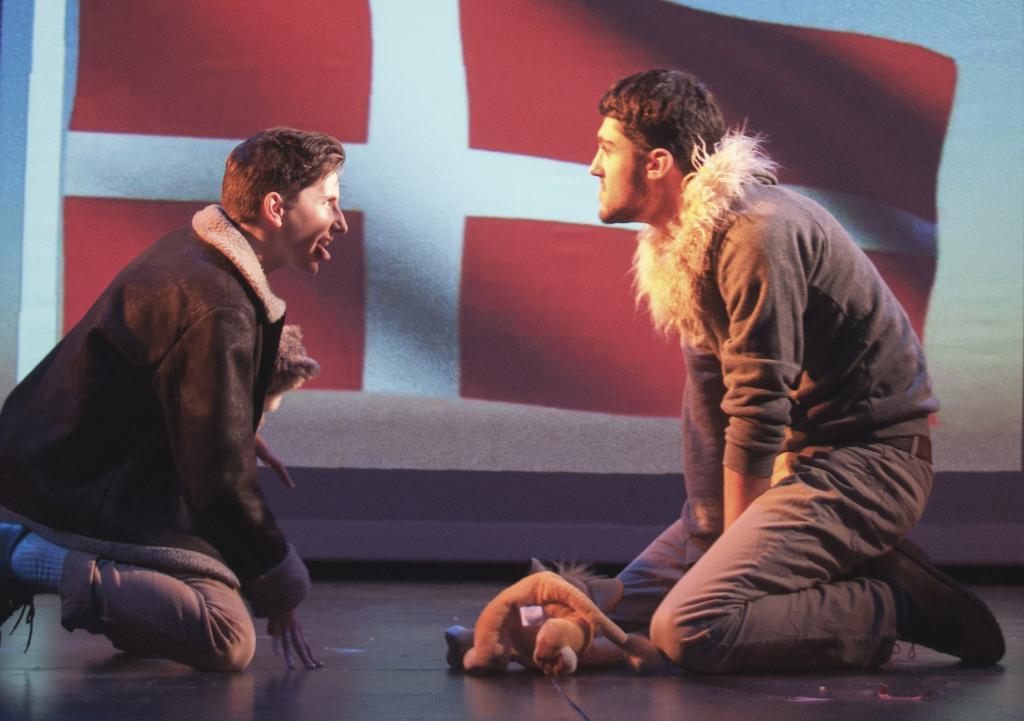 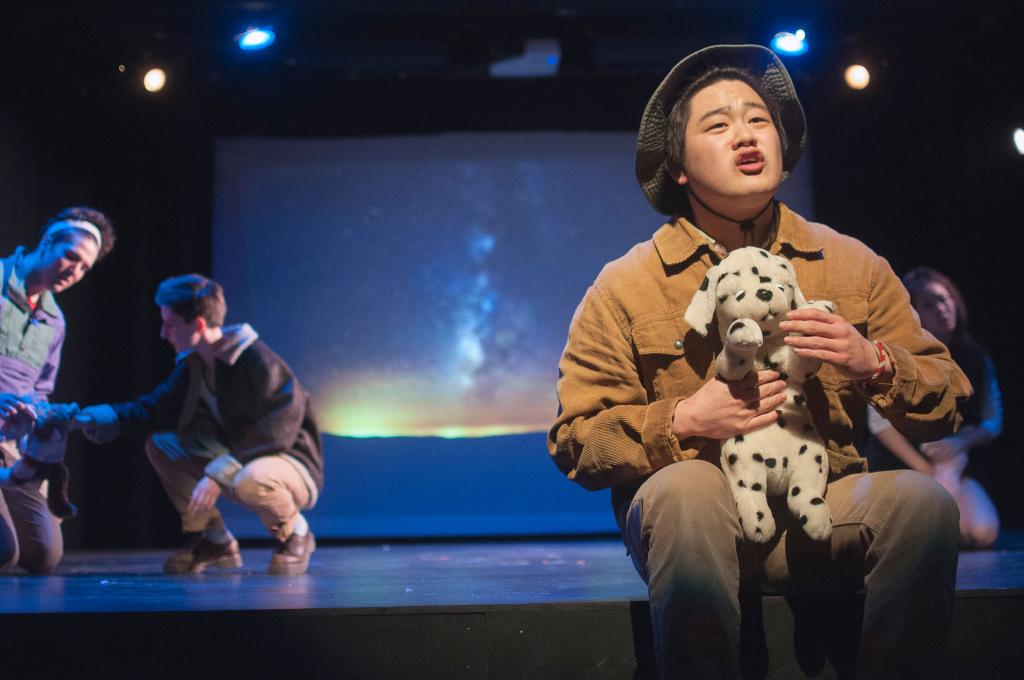 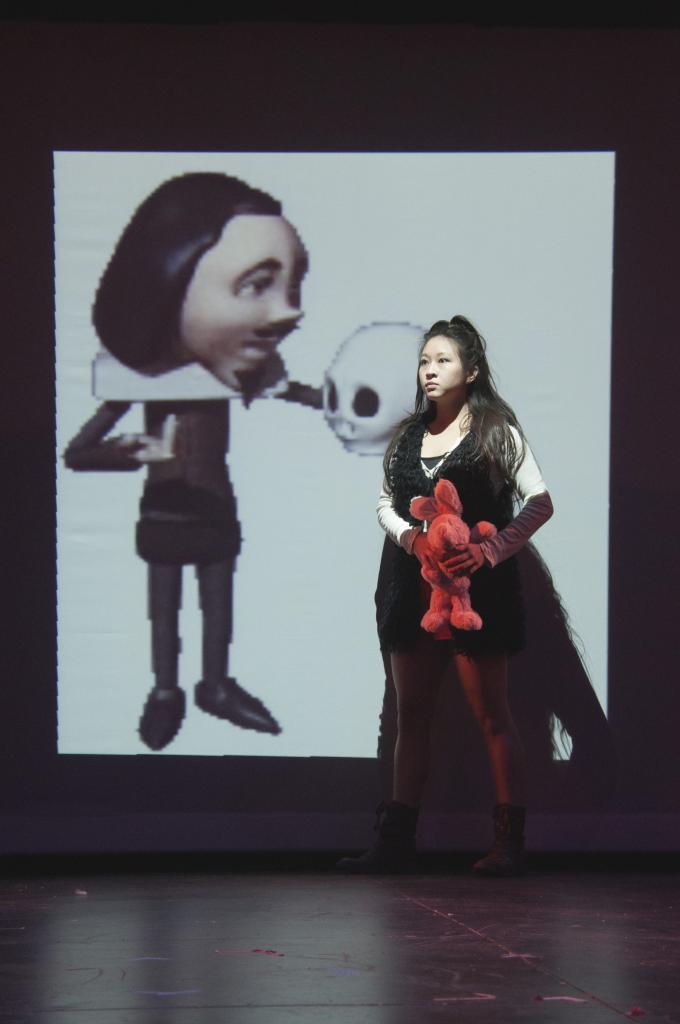 A Weekend of Workshops offers a stage to directors, devisers and performers hoping to exercise and explore their craft. This Winter, directors choose moments which explore our relationship to wrongdoing. In Light Touch, Chris Deakin uses Shakespeare’s text and Walt’s imagery to attempt a modern vengeance. Eric Kirkes looks for intimacy in the wake of mistake in selections from Rabbit Hole. In selections from Angels in America, Natalie Wagner confronts distinct expectations of love. And Andrew Mao’s I, Iago imagines Othello’s story from a more villainous perspective. Work it out this winter.

Written by WIlliam Shakespeare
Adapted and directed by Chris Deakin

Written by William Shakespeare
Adapted and directed by Andrew Mao

Tessa Garcia-Duarte (Clawdius) is a first year in the College and made her UT debut in Macbeth last quarter. In the past Tessa has performed and stage managed with Seattle Shakespeare Company, Seattle Academy’s theater program, and Seattle Public Theater. This past year she was also on the board of the Young Americans’ Theatre Company and directed Night Swim for their summer season.

Collin Lapinsky (Burdina) is a third-year student in the College. He is a member of the 28th Generation of Off-Off Campus.

Si Squires-Kasten (Hamlion) is a first-year pursuing a double major in English and Public Policy. This show marks his first involvement with University Theater. He is also the dramaturg for the Dean's Men production of Richard II.

Kyle Yeh (PumbaaCrantz) is a second-year in the College possibly majoring in Linguistics.  This is his third UT credit, having performed in The Still Alarm (Workshops, Spring 2014) and The Hamletmachine (Fall 2013).

Sarah Lo (Ofurlia) is a fourth-year East Asian Languages and Civilizations and Theater and Performance Studies Major. She has previously appeared in the Fall 2013 Workshop Barely There, Court Theater's production of M. Butterfly in Spring 2014, choreographed for Cabaret, and most recently appeared as a witch in Macbeth.

Rebecca Edwards (Stage Manager) is a fourth-year Gender Studies major with a concentration in Creative Writing. This is her second UT credit, having served as stage manager for winter 2014's workshop Springwood Central Honors Society.

Chris Deakin (Director) is a fourth-year undergraduate majoring in Theater and Performance Studies. His credits include Closer (Dan), A Streetcar Named Desire (Mitch), Buried in Bughouse Square: A Studs Terkel Circus (Narrator), New Work Week (Director: “Stop/See”/curator), Godspell (musician),Springwood Central Honors Society (writer/director), Hedda Gabler (Eilert Lovborg), The House of Yes (Marty), The Merchant of Venice (Salanio, Prince of Arragon), The Glass Menagerie (Tom), The Lion in Winter (John), Twelfth Night (Sebastian) and The Violet Hour (Denny). He has also served as Assistant to the Director and the Managing Director of TAPS, and is a member of UT committee.

Elisabeth Del Toro (gif designer/gifstress) is a third-year TAPS and Anthropology major. She has worked as an actor (Closer, Cabaret, Godspell, Grey Gardens, House of Yes, Drowsy Chaperone, ALICES), stagehand (Henry VI), and assistant sound designer (Glass Menagerie) for UT, and is currently serving her second term on UT Committee, as Secretary. Elisabeth is also a curator of the Theater[24] Festival and directing the winter quarter Commedia show: Cherry Poppins.

Mickey Desruisseaux (Othello) is a fourth-year in the College majoring in Political Science. This is his first UT production, and first theater production overall since his turn as Judas/John the Baptist in a local church production of Godspell.

Andrew Mao (Director) is a TAPS major and can't be more excited for his first directorial role in a UT workshop! In the past, he has choreographed and performed with the Classical Entertainment Society and Le Vorris & Vox Circus. This quarter, he is thrilled to be directing the CES 6th week production of Magnifique: A Murder! - The Mystery: The Dinner: The Play. He is also thrilled to choreograph and perform with the LV&V 8th week production of Winter's Thaw.

Sheenie Chan (Stage Manager) is a third-year majoring in economics. This is her first year being involved in UT.

Joey Wong (Assistant Stage Manager) is a first-year intending to major in Psychology/Comparative Human Development. This is her second UT production, following Closer (assistant set designer). She has also been involved in various high school productions as director, playwright and set designer.

Emma Maltby (Harper Pitt) is a first-year potential TAPS and History double major. She has been involved in Macbeth (Lady Macduff) with UT, and trained and performed with the Horace Mann Theatre Company, the Utah Shakespearean Festival, and the Stella Adler Studio of Acting.

DC Nitz (Prior) is a second-year in the college, majoring in TAPS. They are a member of the 28th Generation of Off-Off Campus, and performed with them in Just Kidding (Unless You Want To) [Spring, ‘14] and Feliz NaviDad I’m Gay [Autumn, ‘14]. In addition to this workshop, they co-directed an Off-Off show and will play the Lobster Man in Cowboy Mouth this quarter. They have also served lovingly on UT Committee this quarter and in the Spring of 2014 as the Off-Off Committee Representative.

Ruben Lesnick (Louis Ironson) is a third-year who is majoring in the Biological Sciences. His previous theatrical roles include Silvius in As You Like It and Orestes & Thyestes in Iron Bridal Feast with the Classical Entertainment Society.

Natalie Wagner (Director) is a second-year student majoring in Law, Letters and Society and minoring in TAPS. She has primarily worked as a stage manager for UT on Endgame (SM), Buried in Bughouse Square, Godspell, Grey Gardens, and Hedda Gabler (ASM for all 4). She also serves on UT's Student Committee and has participated in Theater[24] multiple times.

Katie Vandervalk (Becca) is a third-year in the College. Past UChicago roles from UT, CES, and Le Vorris and Vox productions include Mrs. Sarti in The Life of Galileo, Mae in What a Wild Party, Ensemble in The Sandman’s Wake, Scheherazade in Le Vorris and Vox Presents: Oz, Tempest in Barely There, and the flower seller in First Love. Kathryn is also an enthusiastic participant in the quarterly Theater[24] festivals

Ricky Stewart (Jason) is a fourth-year Computer Science major, Shoreyite, and lemon square enthusiast.  Through UT, he was in the chorus in Reefer Madness.  He was also in Theater[24], where he played such diverse roles as Ricky Stewart the Ashamed Zoologist, River the Horse Camper, and Ricky Stewart the Lonely Loser.

Sarah Stark (Stage Manager) is a first-year English major. She began working with UT in the fall as a props assistant and stagehand for a production of Patrick Marber’s Closer. Prior to her experience with UT, she acted in high school productions of Weird Romance and Will Rogers’ Follies, and was the props designer for eight high school plays and musicals.

Eric Kirkes (Director) is a current second-year, still currently undecided about his major. This is his directing debut at UChicago. He's been involved in several UT productions including Godspell (Ensemble), A Little Star Quality (Che), and Closer (Props Master). Other past credits include Aida, Almost, Maine, and Thoroughly Modern Millie.

Sophie Downes (Production Manager) is a second-year in the College majoring in English. She has previously worked as an assistant production manager (As You Like It, Fool for Love, Henry V) and as a production/stage manager on Apsara's spring UT collaboration.

Ben Sulser (Board Op) is a third-year Evolutionary Biology major at the University. He previously worked as a Stage Manager in Hotel Nepenthe and Hamletmachine,and Production Managed A Weekend of Workshops last Winter. He has also acted in various Theater 24 productions and CES' Tis Pity She's a Whore (Bergetto). This year, he is continuing into his third year on Tech Staff and is currently serving on UT Committee as the Liaison.

Sasha Ayvazov (Committee Liaison) is fourth-year Math and English major. His experience stretches over nearly 40 shows as a director, SM, PM, actor, liaison, and every possible kind of designer. He has worked on shows with UT, Le Vorris and Vox, Attori Senza Paura, the Dean's Men, Blackfriar's, CES, Maya, and UBallet. Sasha is a member of UT committee, and is a curator for Theater[24].