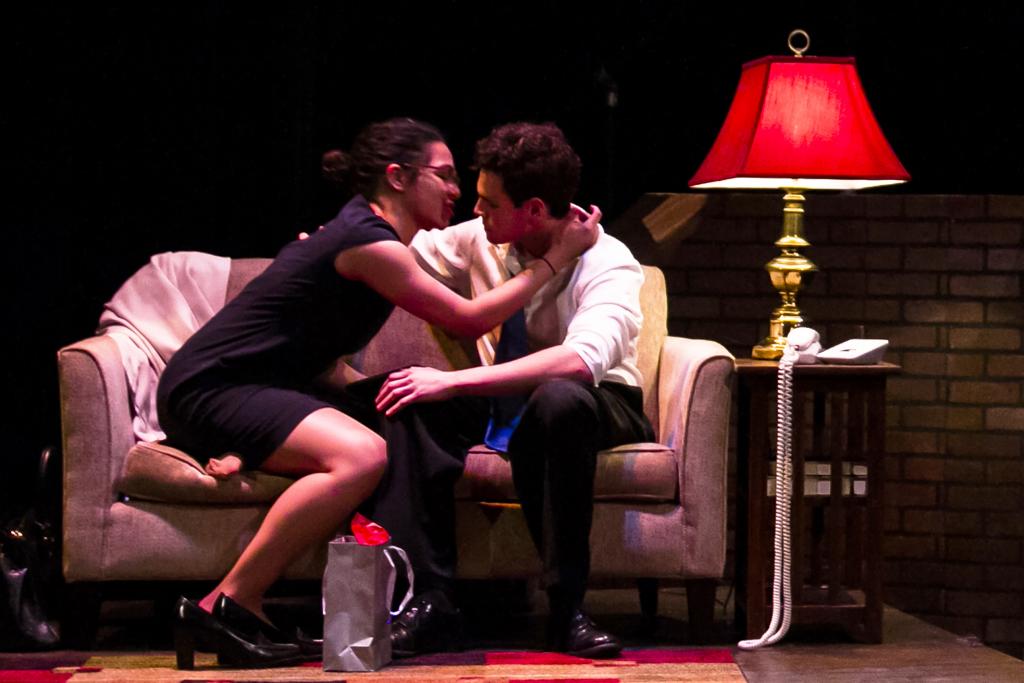 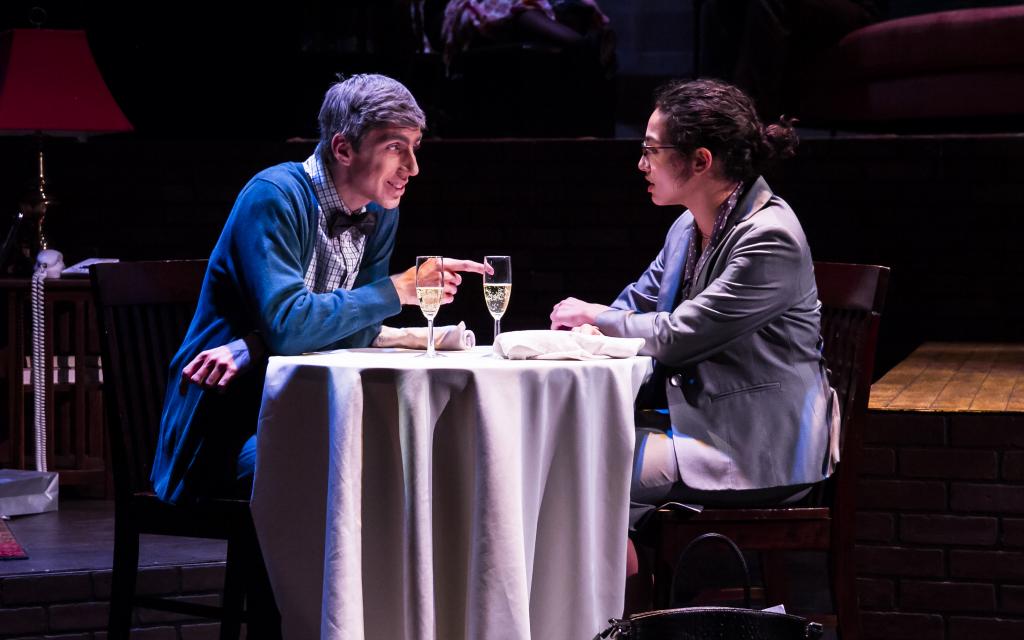 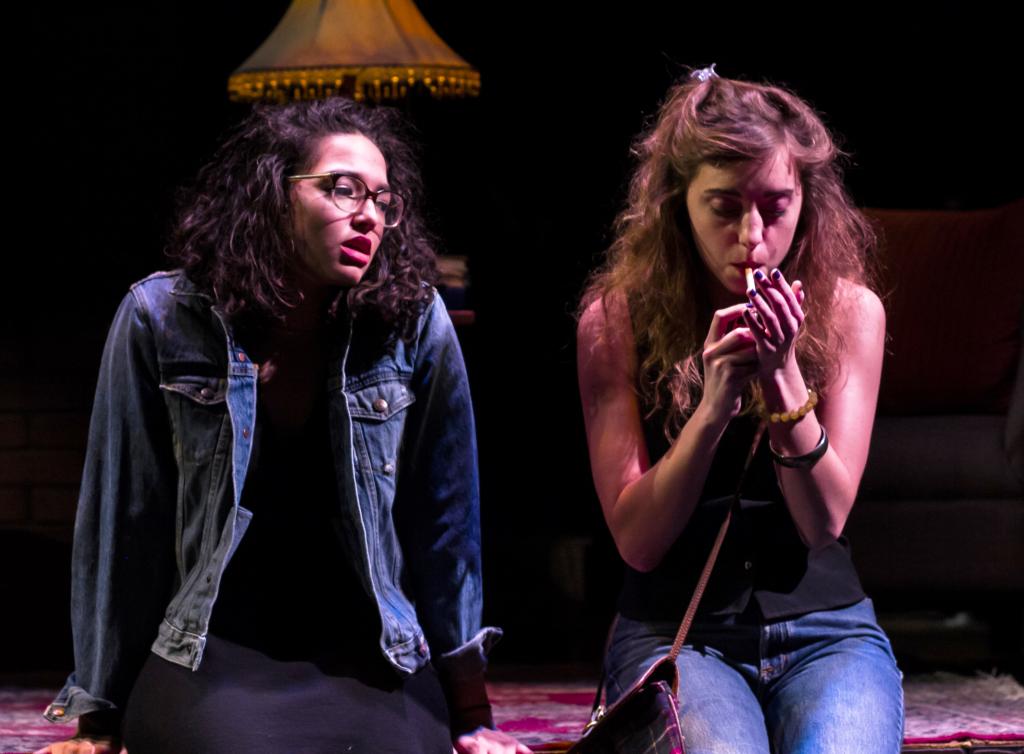 In Amy Herzog’s celebrated play of how manipulate history to facilitate our own emotional past, we follow the whip smart Emma Joseph as she tries to carry on her family’s Marxist traditions in honor of her Blacklisted Grandfather. But when a startling version of her Grandfather is revealed, Emma is forced to question her allegiance to her family and the legacy they have been fighting to protect.

Joe Beutel (Leo) is a student in the College.

Sophie Hoyt (Emma) is a second-year in the College majoring in English. Previous UT/TAPS credits include All Choiceless She and Miss Julie as well as two performances with Fire Escape Films, in Tom and Last Call.

Tom Klosterman (Morty) is a second year physics major. He is excited to be acting in his first mainstage UT show!

Melissa Needlman (Vera) is a fourth-year student in the college. She is a member of the 28th generation of Off Off Campus and has previously performed in Amadeus and New Work Week.

Thomas Noriega (Ben) is a first-year intending to major in Political Science or Philosophy. This is his first time working with University Theater. In his native Tucson, AZ, he was involved in shows such as Young Frankenstein (Inspector Kemp), The Drowsy Chaperone (Aldolpho), and Our Town (Mr. Webb). He would like to own a dog at some point.

Austin Regalado (Miguel) was born in Miami, Florida, and studied acting at New World School of the Arts before gaining acceptance into the University of Chicago’s Class of 2020. This is Austin’s first mainstage production at the University of Chicago, but previous works include: The Aliens (Director), O’ Beautiful, The Pillowman, The Skin of Our Teeth, and Fiddler on the Roof. Austin is incredibly excited to immerse himself in the University’s more artistic side and wishes to continue transforming as an artist here on campus.

Michaela Voit (Mel) is a fourth-year majoring in English and Public Policy. She has served on the Dean’s Men Board and UT Committee while acting in UT shows such as The Seagull (Arkádina), Miss Julie (Kristine), Cowboy Mouth (Cavale), Much Ado About Nothing (Beatrice), and A Midsummer Night’s Dream (Helena). Currently, she serves as Treasurer on the Dean’s Men Board and recently appeared as Hermione in A Winter’s Tale.

Eren Ahn (Assistant Costume Designer) is a second-year majoring in Biological Sciences and minoring in Visual Arts. She has previously worked with MaroonTV and Iris. This is her first experience with a major University Theater production, but she has previously designed for Theater[24].

Corson Barnard (Assistant Costume Designer) is a fourth-year TAPS major. Past credits include Urinetown (Vocal Music Director), West Side Story (Solo Coach), The Girl Show (Ensemble), Home is Implied: A Musical Revue (Ensemble) and GATSBY: The Musical (Composer, Director). Corson will be lead costume designing Circe next quarter. She is also the Media Manager for TAPS and the music director of The Ransom Notes, a co-ed a cappella group on campus.

Lia Bauer-Goulden (Assistant Props Designer) is a first-year and this is her first University Theater show.

Alanna DePinto (Assistant Costume Designer) is a third-year Cinema major. She has previously appeared in Women On Trial and New Work Week.

Patrick Doyle (Production Manager) is a second-year majoring in Philosophy and Allied Fields. His previous UT credits include: Urinetown (Asst. Prod. Manager), The Seagull (APM), Navarasa: Reimagined (APM), Romeo and Juliet (Assist Set/Props). In addition to work in the UT community, Patrick manages Occam's Razor, UChicago's freest improv comedy troupe, and is a member of the Club Volleyball Team. He would like to thank the entire company of After the Revolution for their hard work, dedication, and friendship.

Jenni Guarino (Assistant Production Manager) is a first-year prospective Biology major. She is excited participating in her first show with University Theater, and hopes to continue working within UT throughout her four years in the college.

Alex Hale (Sound Designer) is a fourth-year majoring in Philosophy. She has been involved with University Theater. Past sound design credits include Noises Off, Belleville and Urinetown.

Alex Hearn (Committee Liaison) is a fourth-year studying Public Policy in the College. Previous credits include Noises Off (Director) and By the Bog of Cats (Ghost Fancier/Young Dunne). He also clowns around in UofC Commedia as Pulcinella. He is the treasurer of UT Committee.

Maya Jain (Scenic Designer) is second year TAPS major. She has been involved with University Theater since her first quarter of her first year and is currently involved with Iris as well. Her previous credits with UT include A Weekend of Workshops (Flask), By the Bog of Cats (Assistant Scenic Designer), and West Side Story (Assistant Stage Manager). She is also the scenic designer for Circe, which will go up 8th week of winter quarter.

Rami Kablawi (Assistant Director) is a first-year. This is his first project with UT, though he has been involved with directing in high school.

Victoria Keating (Stagehand) is a first-year in the College. She was also involved in this year's A Weekend of Workshops (Stage Manager). She hopes to continue working in theater.

Coriander Mayer (Lighting Designer) is a third year student majoring in TAPS and English. Most recently with UT, she designed lights for By the Bog of Cats and The Monkey King and associate designed the Dean’s Men production of Romeo and Juliet. Professional design credits include work with Adventure Stage Chicago (Unspoken, On Air), Eleusis Collective (King Lear), Bread and Roses (Logan Center O-Party), Madison Street Theater (Sin), and various dance groups on campus. Her work can be seen at coriandermayer.wordpress.com.

Dee Nitz (Costume Designer) is a fourth-year TAPS major. With UT, she acted in Hamlet (Gertrude), Cowboy Mouth (Lobsterman), and the Angels in America workshop (Prior). She is currently the secretary of UT Committee and is also a member of the 28th Generation of Off-Off Campus. Previously, Dee has designed costumes for the film Helen by Alanna De Pinto, and makeup for the devised piece Weihnachten bei den Hoppenstedts.

Elizabeth Ortiz (Master Electrician) is a third year majoring in Political Science and minoring in Near Eastern Languages and Civilizations. Previous credits include A Weekend of Workshops and By The Bog Of Cats (Assistant Lighting Designer). Outside theater, she is the president of Unaccompanied Women and is involved in UBallet and Le Vorris and Vox Circus.

Megan Philippi (Director) is a third-year TAPS major. At UChicago, she has worked on A Winter's Tale (Assistant Director), Ex Libris (Director), By the Bog of Cats (Monica), Urinetown (Assistant Director), Endgame (Assistant Set Designer), New Work Week (Director), and Theater[24] (Writer). Her short play An Invitation was performed at Victory Gardens's College Night: Trigger Finger and her monologue Brachiosaurus can be heard outside The Field Museum through August 2017 as part of Statue Stories Chicago.

Marina Resende (assistant scenic designer) is a third-year Comparative Literature and Germanic Studies double major. Besides literature, her interests include visual arts, performance and design. In the past, she has worked as a props designer and assistant director for the Circus/UT collaboration The Monkey King.

Sarah Stark (Stage Manager) is a third-year English major in the College. Previous UT/TAPS credits include: A Winter's Tale (SM), Belleville (SM), Urinetown (SM), This Is How It Goes (ASM), Selections from Rabbit Hole (SM), Closer (Asst Props & Stagehand). She has also worked in stage management with American Blues Theater, The House Theatre, The Syndicate, and Pride Films & Plays and looks forward to pursuing stage management professionally upon graduation.

M.C. Steffen (Dramaturg) is a fourth-year TAPS major in the College. His UT credits include Belleville (Director), Urinetown (Dramaturg), Sleuth (Director), Smitten (Director), The House of Yes (Anthony), and reWILDing Genius (Adam). He also directed An Apology for the Course and Outcome of Certain Events Delivered by Doctor John Faustus on This His Final Evening for the Classical Entertainment Society, and is currently preparing to direct the world premiere of .44 croMagnum next February at the 28th Annual Rhinoceros Theater Festival.

Katy Surhigh (Assistant Dramaturg) is a third year English major. Past UT credits include A Winter's Tale (ASM), The Seagull (ASM), Urinetown (Billy Boy Bill), and Rumors (Assistant Costumes). Katy is also a member of UT Committee. Outside of UT, she has stage managed for UChicago Commedia and is the vice president of Rhythm and Jews.