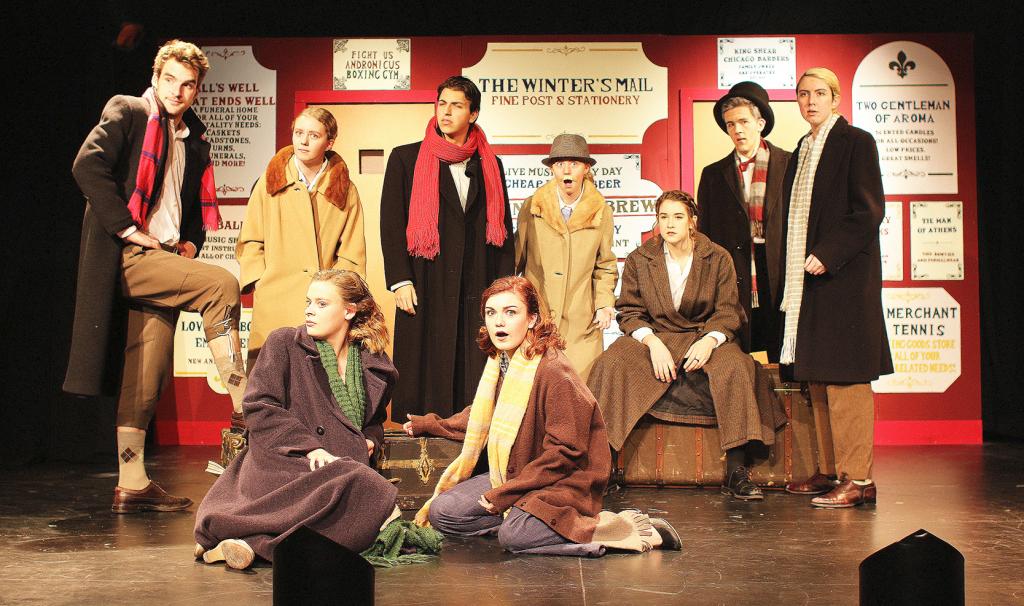 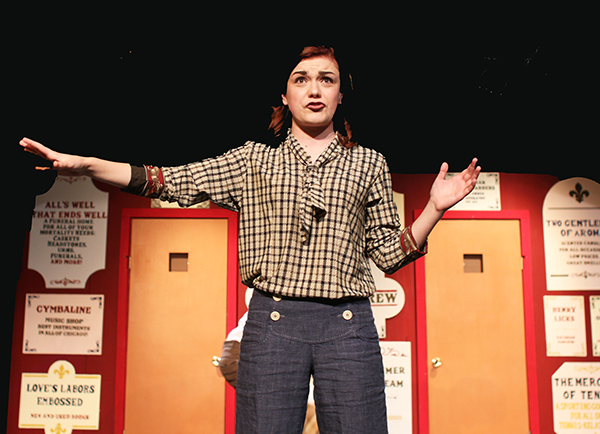 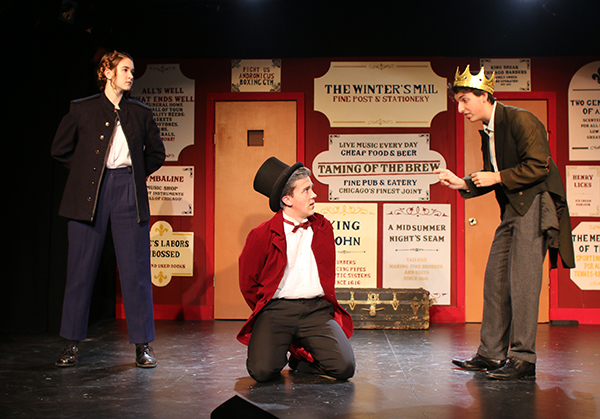 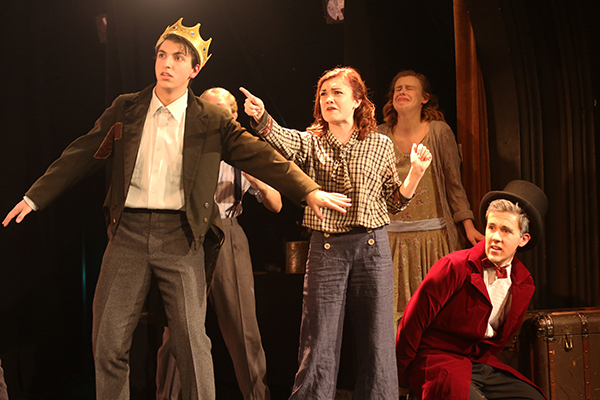 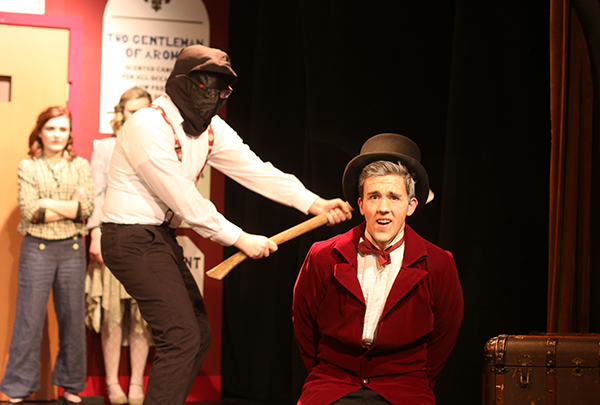 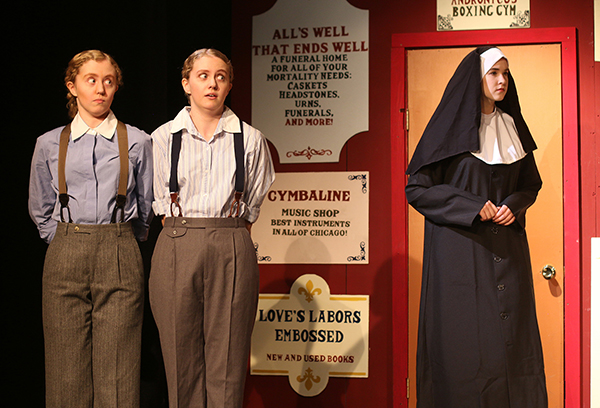 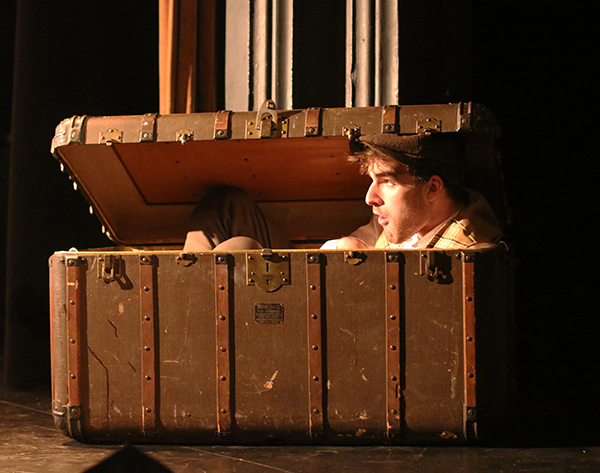 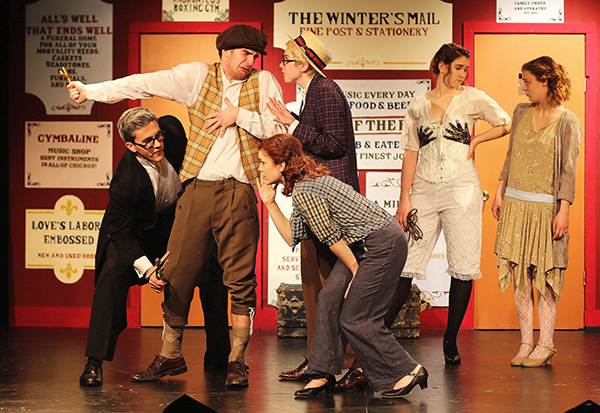 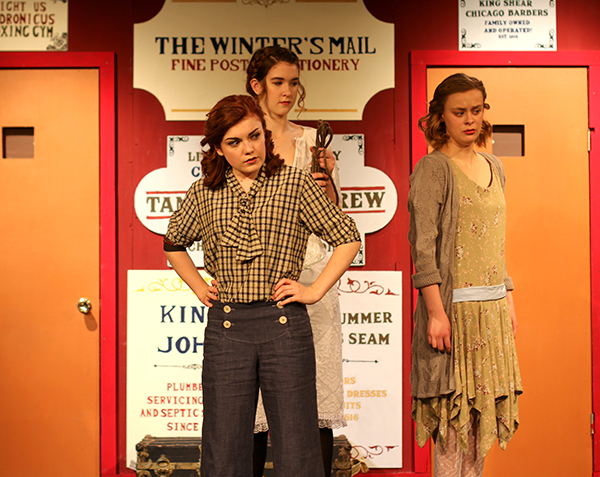 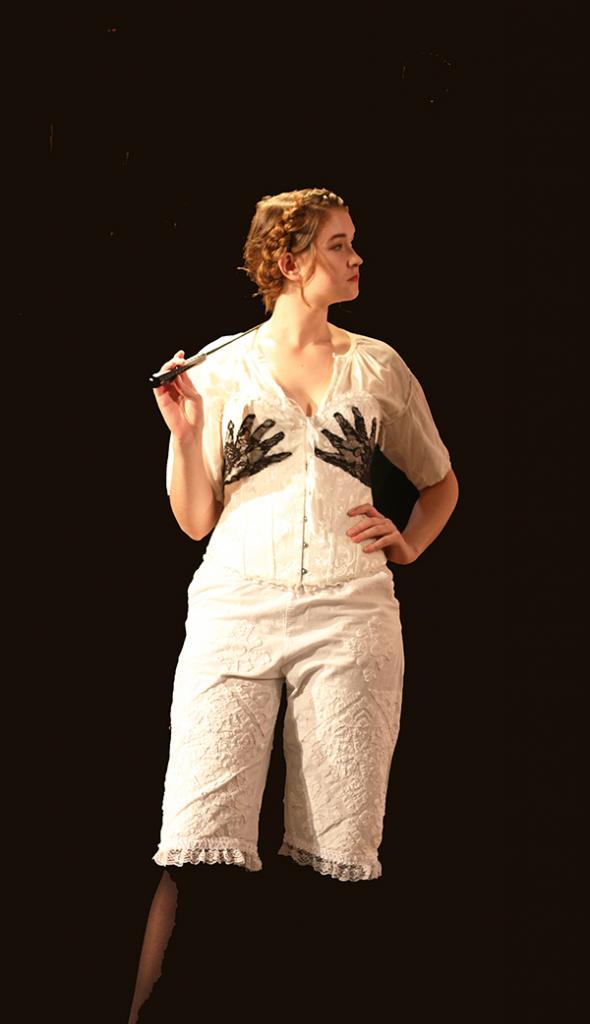 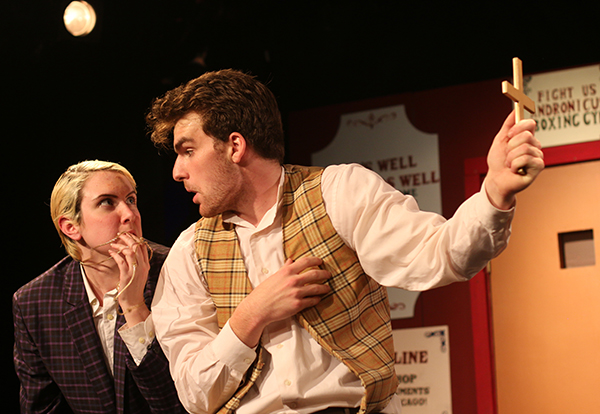 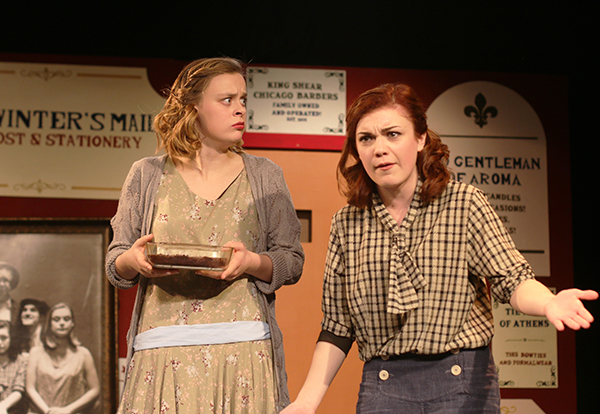 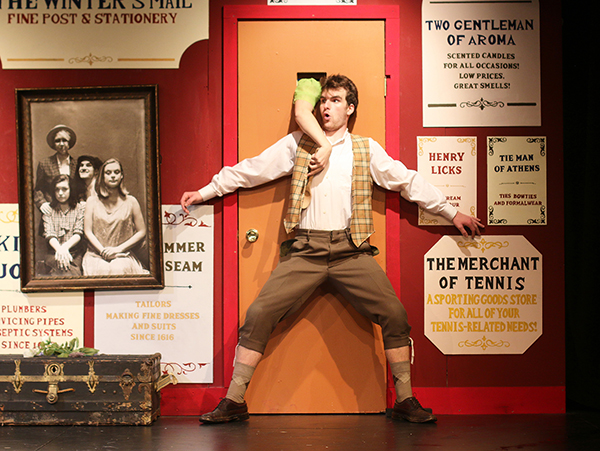 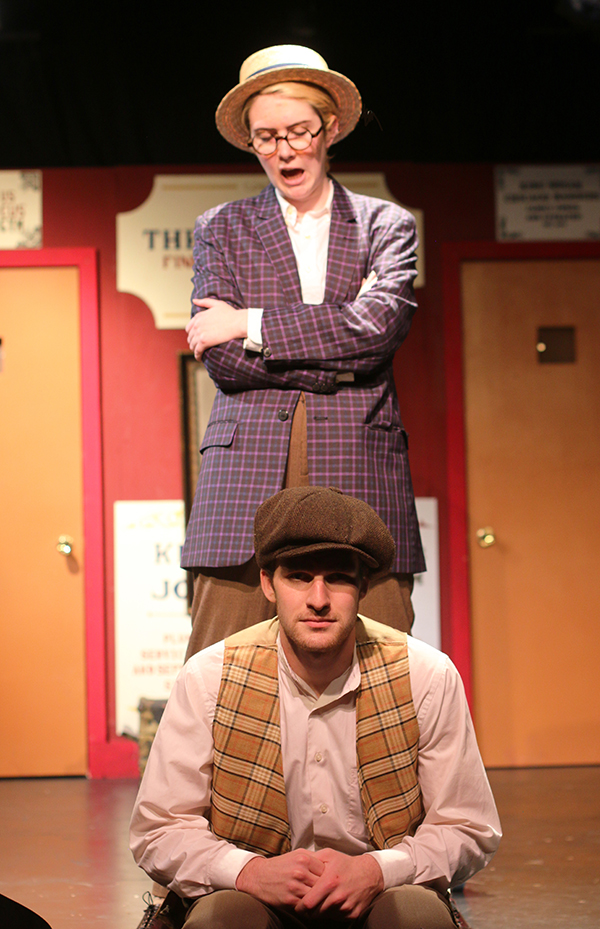 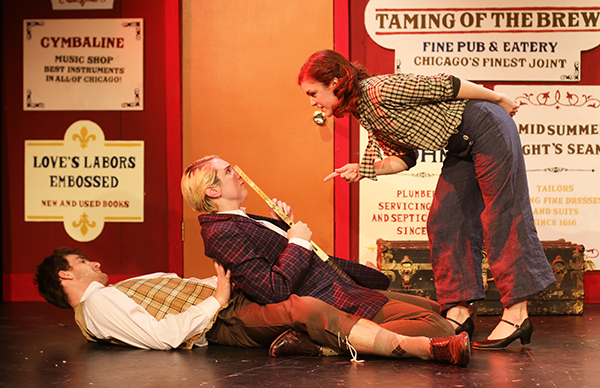 Laughs fly as the clock ticks in Shakespeare’s farce about the craziest family reunion ever. This beloved tale of mistaken identity, frenzied emotions, impending executions, perceived infidelity, bawdiness and buffoonery; done with The Dean’s Men’s flair.

Danielle Damon (Courtesan/Aemelia/Luce/Officer) is a student in the College.

Ian Grant-Funck (Dromio) is a first-year in the College. He has not yet decided on a major.

Hope Gundlah (First Merchant/Second Merchant/Messenger) is a first-year in the College. She is currently hoping to major in English and minor in Theatre and Performance Studies. This is her first UT show.

Tess Gundlah (Angelo) is a first-year in the College and is currently looking to major in English with a minor in theatre.

Quinn Kane (Aegeon/Pinch) is a second-year Classics major. Quinn's first appearance with the Dean's Men was in Hamlet (Polonius). He also appeared in UT's Urinetown (Bobby Strong) and West Side Story (Baby Johnny).

Julianne Lorndale (Luciana) is an Undecided first-year in the college. This is her first UT show and she is very excited about it!

Larkin Smith (Adriana) is a second-year majoring in Fundamentals: Issues and Texts, with a minor in Human Rights. With UT, she has previously worked on Urinetown (Soupy Sue), Hamlet (Assistant Props Designer), and West Side Story (Graziella). You can also see her perform with the co-ed a cappella group, The Ransom Notes!

Tempest Wisdom (Antipholus) has been doing physical comedy her whole life, but only sometimes intentionally. She is a third-year TAPS major and is an ensemble member of U of C Commedia.

Hana Eldessouky (Assistant Lighting Designer) is a first-year in the College. Her previous experiences with lighting include Oedipus, multiple dance showcases, and a children's production of Frozen.

Jacob Goodman (Director) is a second-year in the College double majoring in Comparative Human Development and Visual Arts. Past UT credits include: Twelfth Night (Duke Orsino), The Seagull (Konstantin) and Romeo & Juliet (Assistant Director). Jacob is also a member of UT's committee.

Alex Hearn (Clown Coach) is a fourth-year at the University of Chicago. He is a local rube, who was raised by clowns in a forest, where UofC Commedia discovered him and raised him as Pulcinella. When he isn't snipe-hunting, he studies nuclear policy and is the treasurer of UT Committee.

Sophia Lubarr (ASM) is a first-year prospective math major in the College. Though she did theater in high school, Comedy of Errors is her first UT show.

Rileigh Luczak (Lighting Designer) is a third-year math major and HiPS minor in the College. Previous University Theater lighting credits include Noises Off (ME), Urinetown (LD), This is How it Goes (ALD), and Amadeus (ME). She has also stage managed for Le Vorris & Vox Circus (The Monkey King, Winter's Thaw) and is a member of Circus Board.

Patrick McCarthy (Dramaturg) is a fourth-year English and Linguistics major in the college. He has previously appeared in Romeo and Juliet (Lord Capulet), By the Bog of Cats (Xavier), Twelfth Night (Malvolio), and Rumors (Ken).

Alex Rodriguez (Assistant Director) is a fourth-year Classical Studies major in the College. He has appeared in Cabaret (Hans) and Romeo & Juliet (Lord Montague).

Mariel Shlomchik (Production Manager) is a fourth-year in the College studying Biology. Comedy of Errors is her twelfth show, and fifth time production managing with University Theater. In the last year she has production managed The Seagull and Krapp's Last Tape.

Stephanie Slaven-Ruffing (Sound Designer) is a third-year in the college double majoring in Anthropology and Comparative Human Development. Past credits include sound designing Romeo and Juliet, Navarasa: Reimagined, the CES production Wittgenstein's Mistress, and House of Cards. She is also a member of the TAPS Student Technical Staff.

Emily Terian (Assistant Lighting Designer) is a first-year planning to major in Neuroscience in the College. While this is her first UT show, she has previously done tech crew for productions at her high school, including Twelve Angry Men, Arsenic and Old Lace, Laughingstock, Barnum, and Fiddler on the Roof.

Anneke Thorne (Assistant Costume Designer) is a first-year in the College majoring in Biology. This is her first UT show.

Abby Weymouth (Assistant Set Designer) is a first-year in the College potentially majoring in math or chemistry. She has previously worked on the Weekend of Workshops (Asst. Lighting).