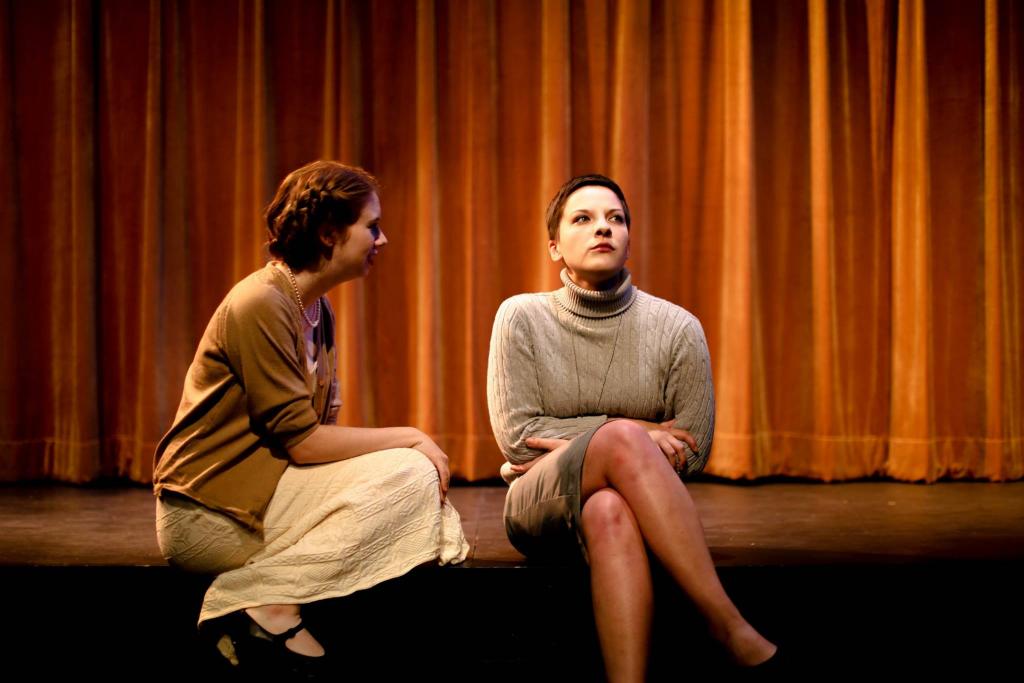 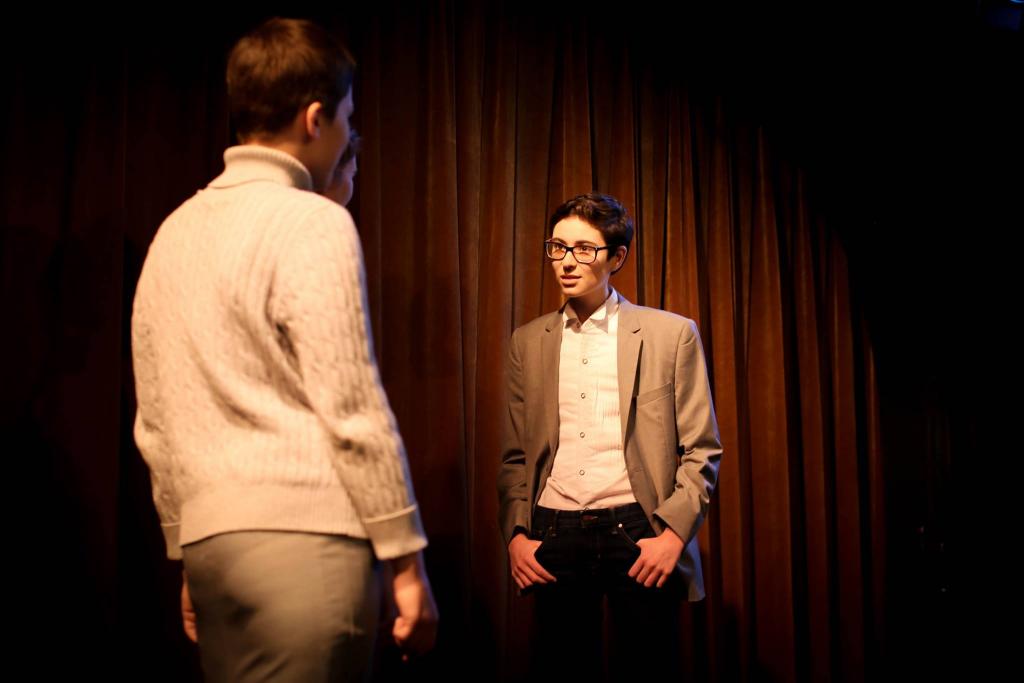 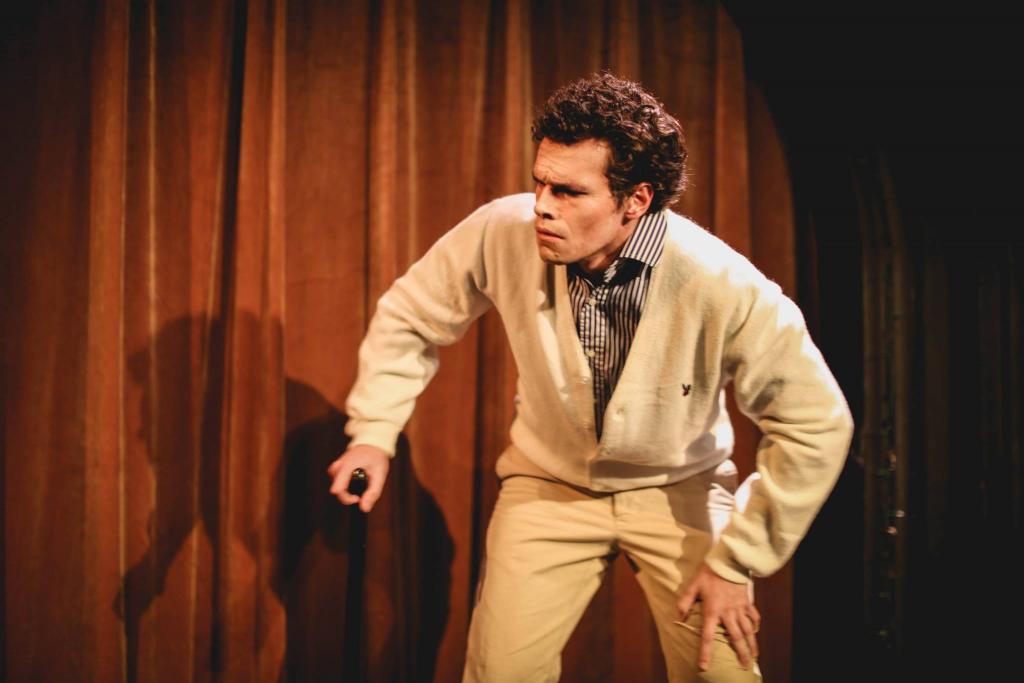 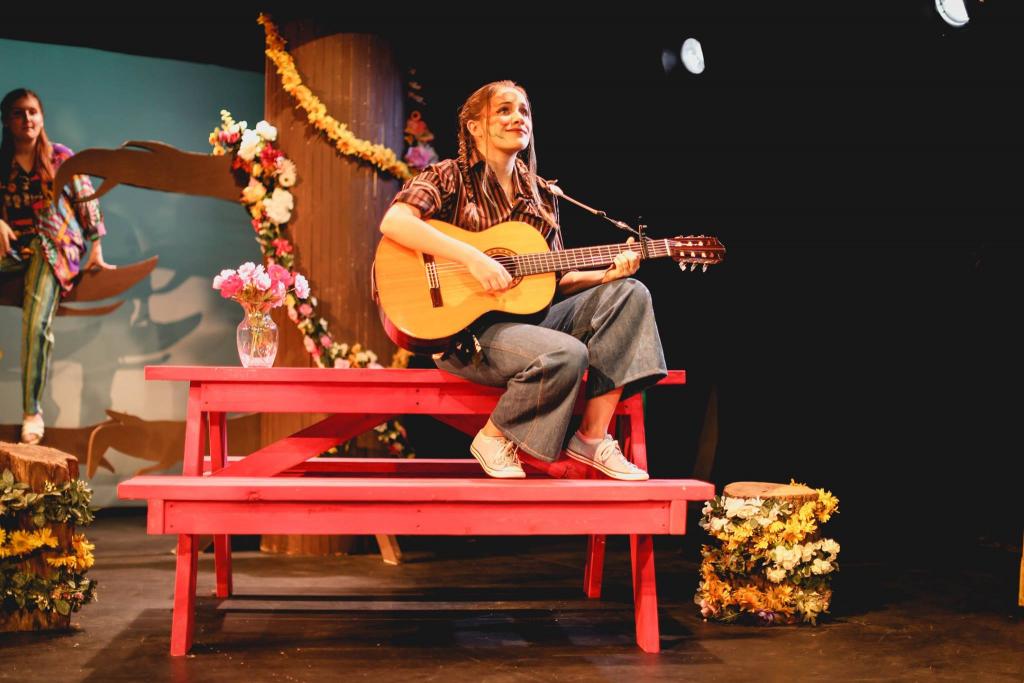 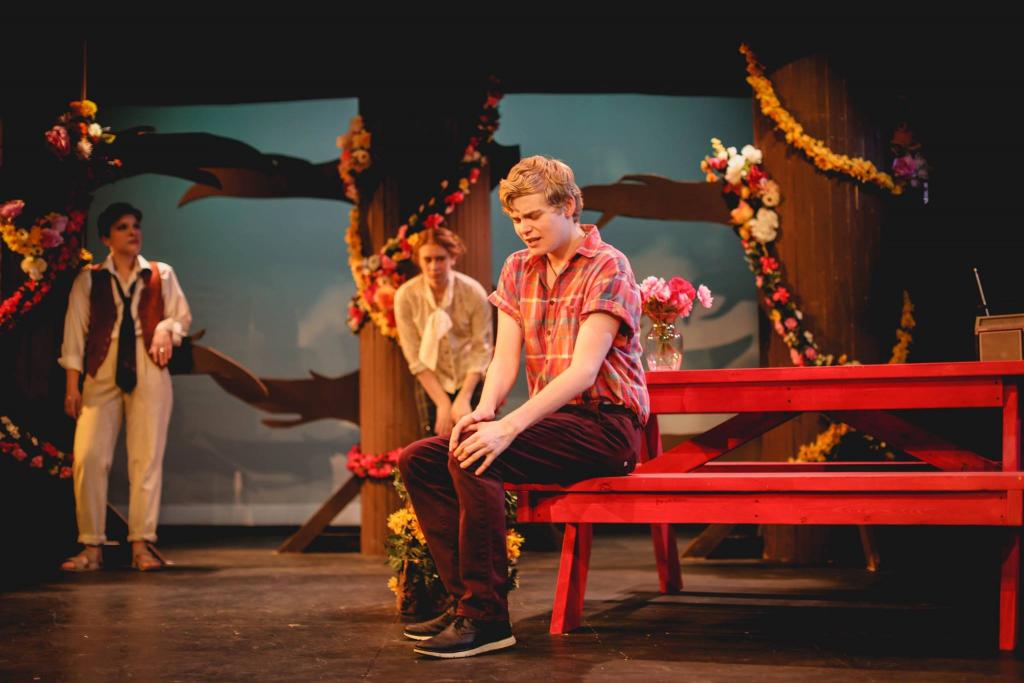 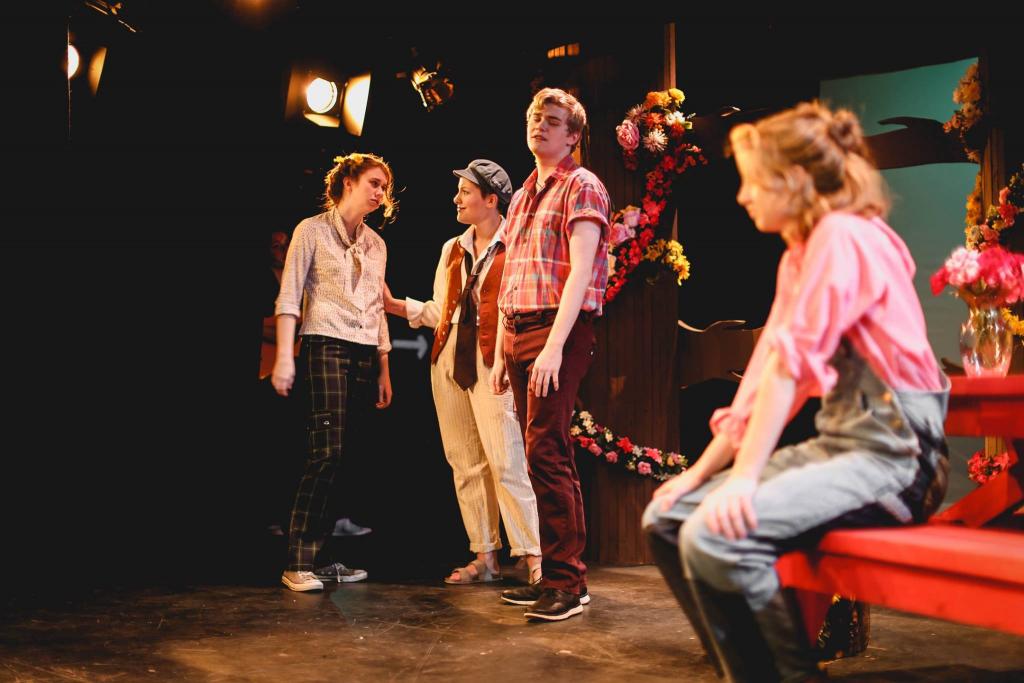 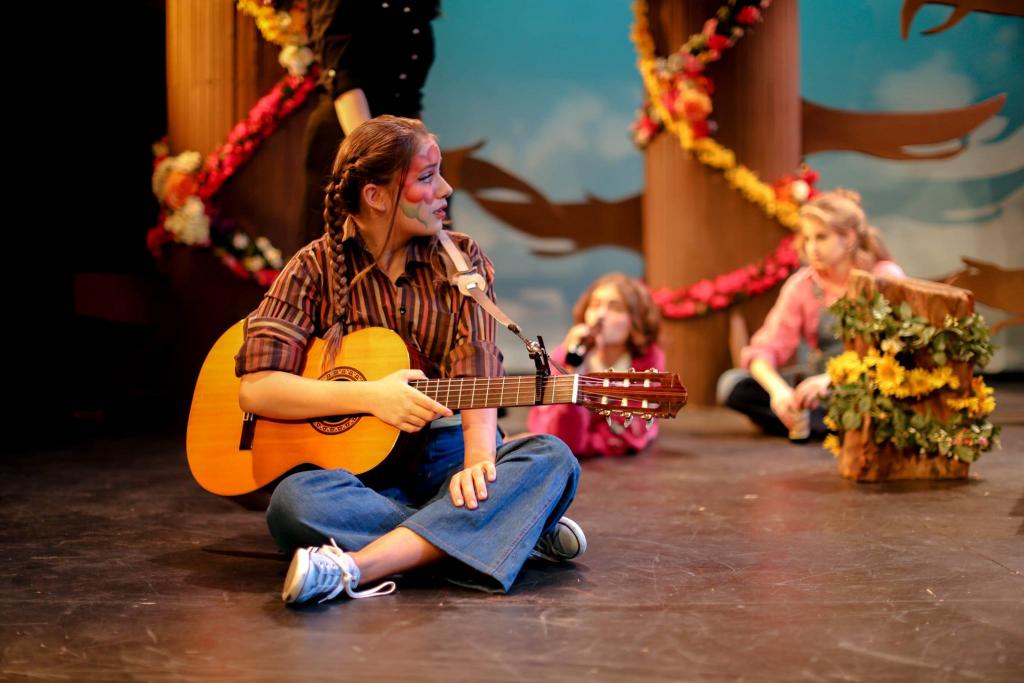 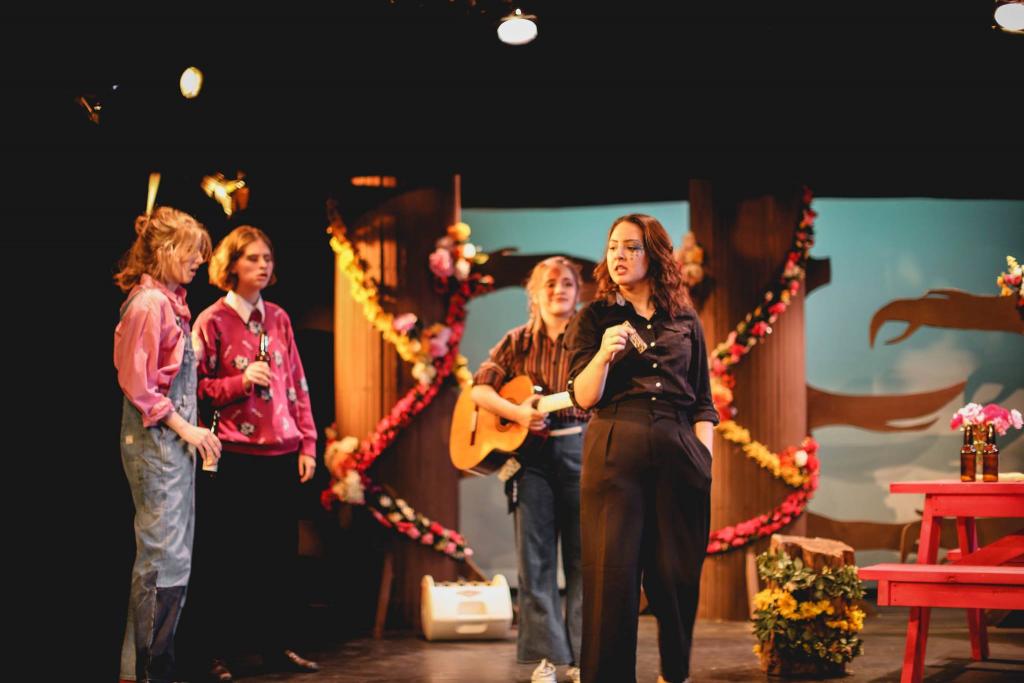 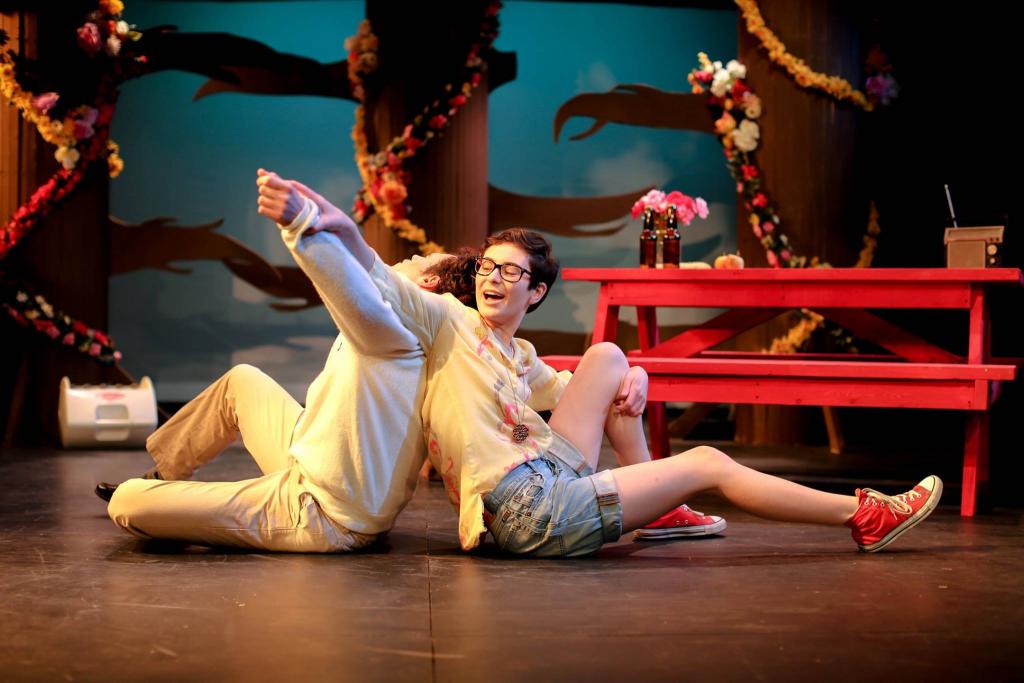 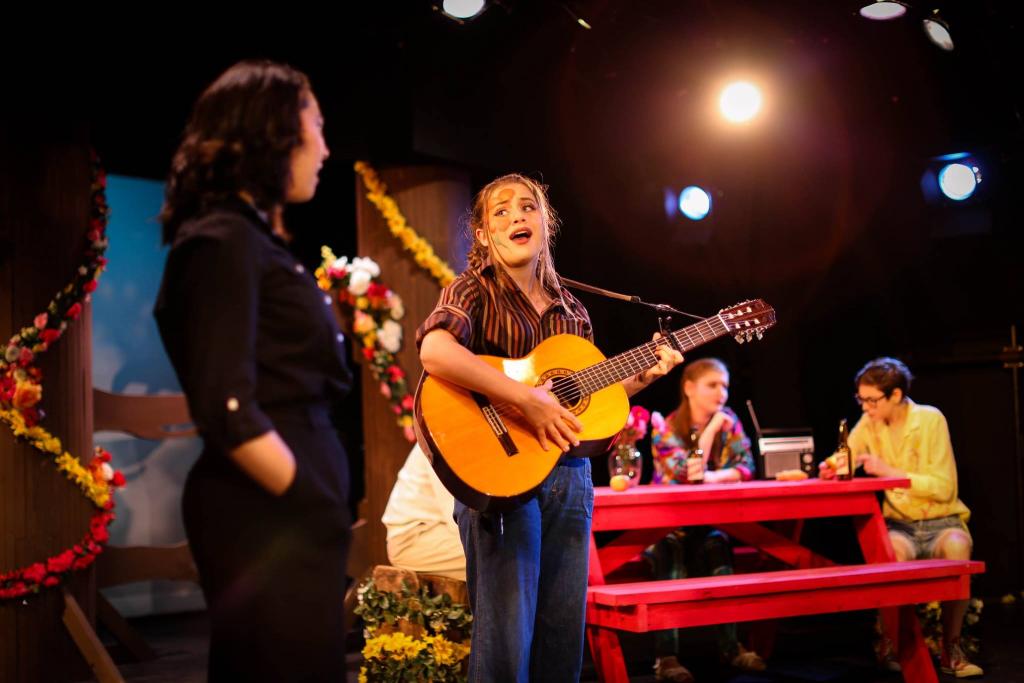 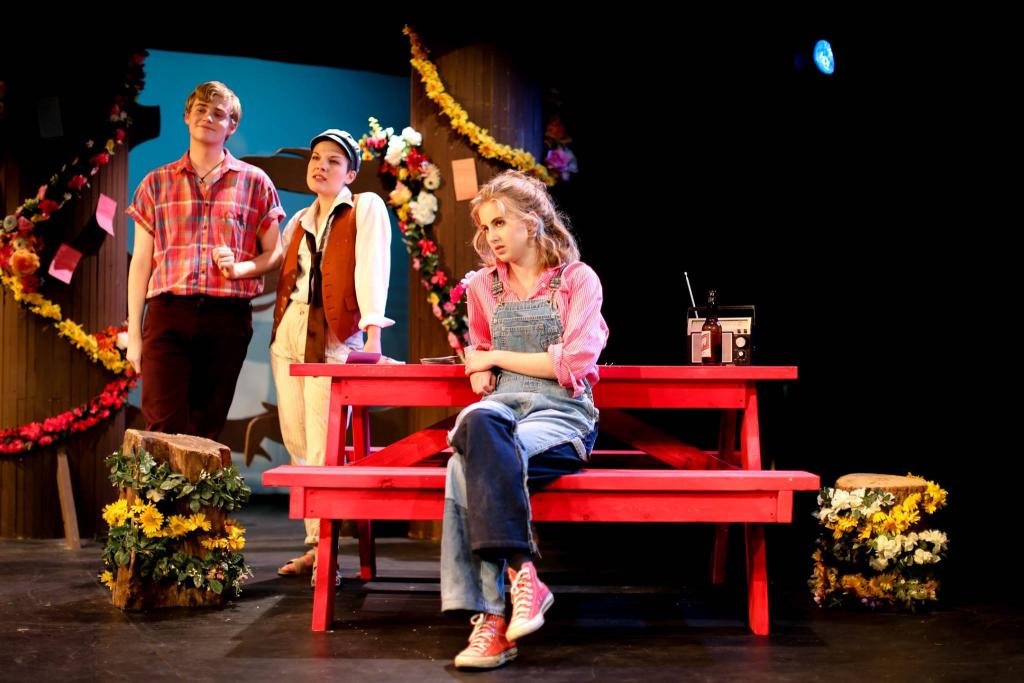 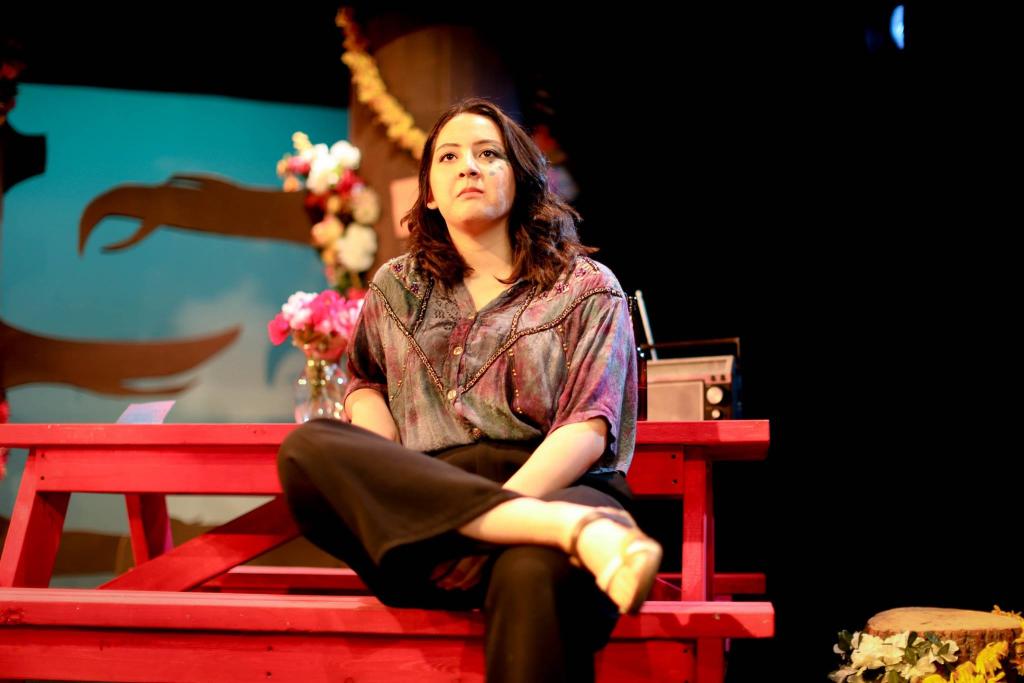 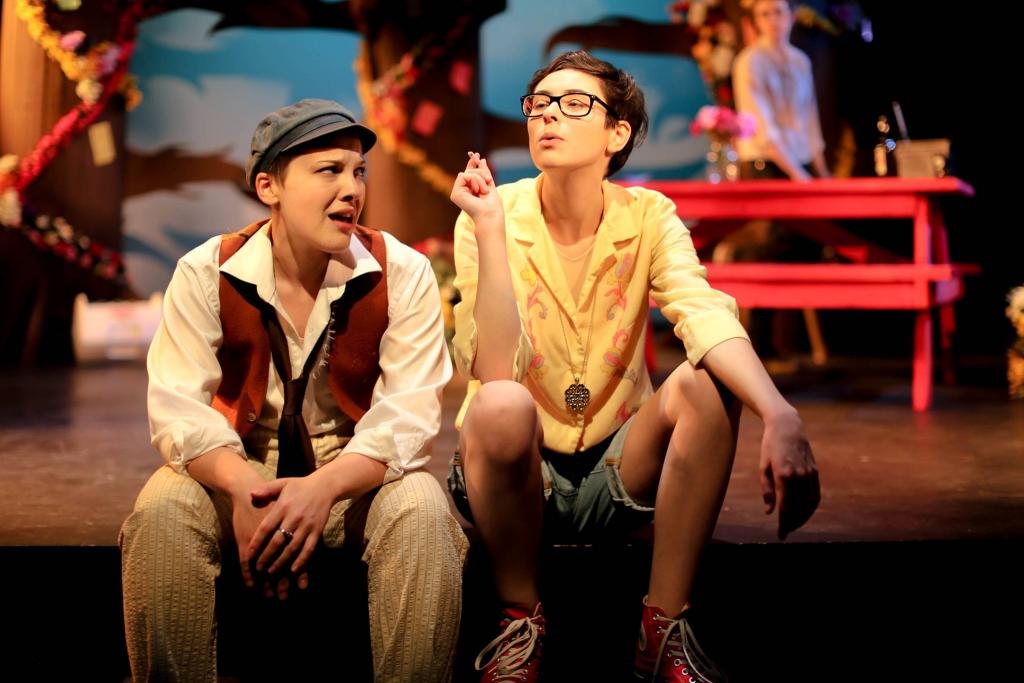 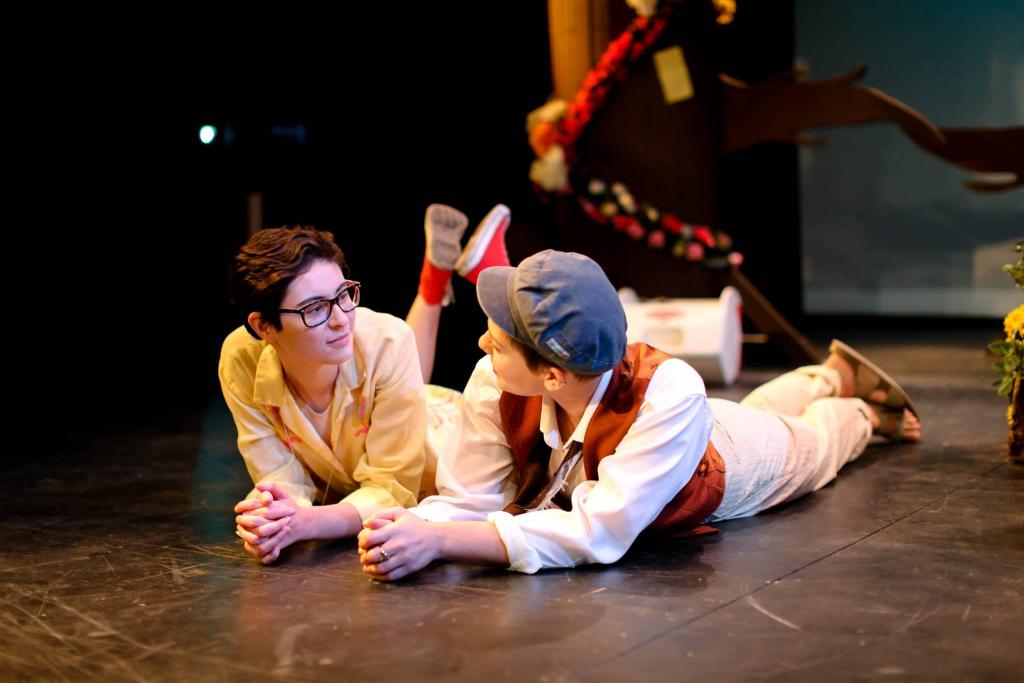 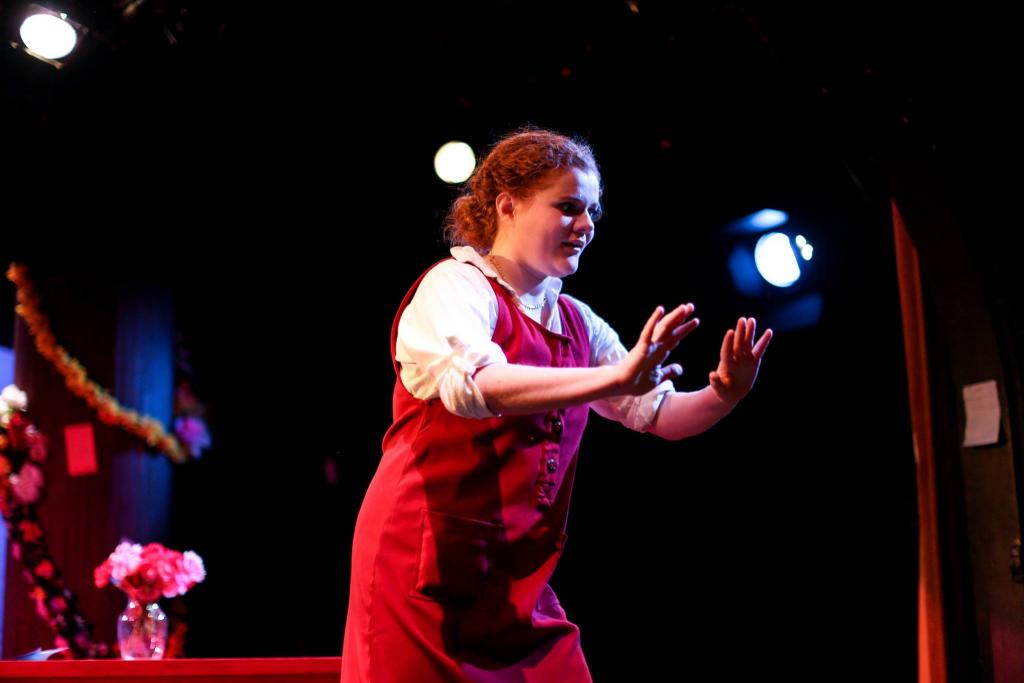 As Stephen Sondheim famously wrote, "Anything can happen in the woods," and as we travel to Northern California during the late 1960s in director Emily Lynch’s "As You Like It," nearly everything does. Through the historical lens of gender fluidity, psychedelia, and counterculture, we explore the often ridiculous lengths we go to in order to find love.

Katie Bevil (Orlando) is a second-year TAPS and French major. UT credits include Iphigenia and Other Daughters (Chrysothemis) and She Kills Monsters (Assistant Set Designer).

Margaret Glazier (Oliver) is a third-year English Literature and Language and Political Science major. She is the treasurer of University Theater. She has previously worked on LEAR (Cordelia/The Fool), The Children's Hour (Karen), Watch Your Language, C*nt (Sam), The Merchant of Venice (Shylock), Romeo and Juliet (Sister Laura) and Hamlet (Claudius).

Jack Schwab (Charles/Audrey) is a first-year Geographical Studies major. He has previously worked on plays in high school, but this is his first show at the University of Chicago. Outside of the theater, he's an avid Los Angeles Lakers fan and trains Brazilian Ju Jitsu.

Ava Geenen (Celia) is a second-year student at the University of Chicago. At UChicago, she has previously acted in The Children’s Hour (Rosalie) and a workshop (Dusk Before Fireworks). She studied acting at her high school, the Baltimore School for the Arts.

Grace Bolander (Rosalind) is a fourth-year TAPS major. She has performed with UT in five mainstages, a workshop, and several New Work Week performances. Some shows include Macbeth (Lady Macbeth), By the Bog of Cats (Hester Swane), and The Merchant of Venice (Portia). She also performed in the TAPS performances of The Winter's Tale (Paulina) and The Children's Hour (Mrs. Tilford). Outside of school, Grace has interned at Steppenwolf Theatre Company and Court Theatre and plans to pursue a career in acting in Chicago after she graduates this year.

Riley Spieler (Touchstone) is a first-year undecided major. This is his first UT credit. He is very excited for his first college production and sends love to everyone on the cast and crew that's helped him acclimate to this wonderful community!

Sahil Nerurkar (Duke Frederick/Hymen) is a first year and very undecided on his major. He has previously worked on Julius Caesar (Brutus), Big Love (Nikos), 42nd Street (Pat Denning), and Macbeth (Macbeth/Script Editor). In addition to acting, he is also interested in playwriting, and has written and produced two one act plays.

Austin Regalado (Adam/William) studied acting at New World School of the Arts before joining the University of Chicago’s Class of 2020. Austin’s previous works include: The Aliens (Director), O’ Beautiful, The Pillowman, The Skin of Our Teeth, Fiddler on the Roof, After The Revolution, .44CroMagnum, and She Kills Monsters. Austin is incredibly excited to immerse himself in Chicago's artistic side and wishes to continue performing throughout college.

Olenka Wellisz (Corin) has suffered through a long and arduous trial of both middle and high school theater. She has been described by the New York Times as being "almost like a girl," which is odd because they have only ever seen her play men. In respect for her privacy they, as well as many other venerable news organizations, have since erased the numerous mentions of her in their past publications, taking inspiration in doing so from George Orwell's 1984. She appreciates this greatly, because now she can devote herself to her true passion, which is sheep herding, an activity she discovered while method acting for the role of Corin.

Belen Edwards (Silvius) is a second-year English major. She has previously acted in She Kills Monsters and Iphigenia and Other Daughters, and worked on Mr. Burns, a post-electric play (Assistant Set Designer).

Sabrina Sternberg (Duke Senior) is a first-year from New York. This is her first UT production. High school experience includes The Light in the Piazza (Margaret Johnson), Into the Woods (The Baker's Wife), and Macbeth (Malcolm). Her favorite performance experience has been performing in Disney World for the past five summers. Thanks to the cast and crew!

Faith Shepherd (Amiens) is a second-year Psychology and Comparative Human Development major. She has previously worked on Merchant of Venice (Jessica), Henry VI (Somerset, Prince Edward), and King Lear (Gloucester). When she's not doing theater, she loves singing and playing her uke/piano, and spending time with lil' kiddos.

Caitlyn Klum (Phebe) is a first-year prospective Creative Writing and Interdisciplinary Humanities major. This is her first UT/Dean's Men show.

Emily Lynch (Director) is a second-year studying English and Political Science. Previous credits include The Merchant of Venice (Salerio), Circe (Kitty), Lear (Player), The Children's Hour (Peggy/Agatha), and New Work Week. She is also a member of UT Committee.

Sarah Stark (Stage Manager) is a fourth-year TAPS and English major in the College. Past UT/TAPS Stage Management credits include: She Kills Monsters, After the Revolution, The Winter's Tale, Belleville, and Urinetown. She has worked professionally with American Blues Theater, The Syndicate, The House Theatre, and most recently at The Glimmerglass Festival and looks forward to continuing her career as a professional stage manager upon graduation.

Coriander Mayer (Dramaturg) is a fourth-year in the College majoring in TAPS with a minor in biology. In the past year, Cori has worked as a live sound engineer for a capella groups on campus. In the past, Cori has worked as a lighting designer both professionally (select credits: Adventure Stage Chicago, Eleusis Collective, Bread and Roses, UBallet) and with University Theater (select credits: By the Bog of Cats, The Monkey King, Romeo and Juliet, After the Revolution). Cori has also directed three workshops with UT, The Candles, Pericles, but Marxist, and The Rope.

Emily Lovett (Music Director/Composer) is a third-year English Literature and Music major. Her past UT Credits include Mr. Burns, a post-electric play (Vocal Director), The Children's Hour (Evelyn), West Side Story (Velma), and Hamlet (Guildenstern). Outside of UT, she also sings in UChicago's Women's Ensemble and works as a Dramaturgy Intern at the Court Theatre.

Edwin Gavis (Scenic Designer), is a third-year Political Science Major. He has previously designed and built sets for a number of University Theater and Dean's Men shows. It takes a village to make a village (or a forest), and he would like to thank: Ben Caracello, Daniel Heins, Avi Sheehan, Hanley Donofrio, Sarah Masaryk, Samantha Rausch, Jenny Pinson, Laura Ashlock, the Technical and Professional Staff, Lia Bauer-Goulden, Olivia Malone, Sam Sobel, Maxine King, The Academy of Motion Pictures, Brooke Nagler, Designers and Assistants [not previously mentioned], Einstein Bagels, the Brothers of the Omega of Psi Upsilon, Sarah Stark, U-Haul, Ian Grant-Funck, his long suffering family and friends, the Reynolds Club staff who let him in at odd hours, Basma Kitchen in Hutchinson Commons, good friends across the sea, the Logan Shop staff who let him stay late and found him staples, Staples - where he did not find staples, Emily Lynch - who believed in him, and the actors - who really aren't half bad.

Theodore Bourget (Costume Designer) is a third-year TAPS and CRES major. In the past, he has been on The Merchant of Venice (Assistant Light Designer) and Lear (Assistant Costume Designer). He is very excited about his debut as a costume designer this quarter and he loves cats.

Anna Aguiar Kosicki (Makeup Designer/Assistant Costume Designer) is a second-year in the college majoring in public policy. Most recent UT credits include A Weekend of Workshops: The Importance of Being Earnest (Director) and She Kills Monsters (Assistant Stage Manager). They also sit on UT's student committee.

Brooke Nagler (Lighting Designer) is very excited to design the lighting for a show for the first time. In the past she has worked on Lear (Assistant Lighting Designer). Thank you to Andrew Meyers and Cori Mayer for their help.

Noah McCarthy (Assistant Production Manager) is a second-year English and Economics Major. This is his first Dean's Men show!

Sam Sobel (Assistant Stage Manager) is a first-year. This is his first show with UT and The Dean's Men.

Sarah Masaryk (Assistant Scenic Designer) is a student in the college.

Hanley Donofrio (Assistant Scenic Designer) is pleased to have been apart of As You Like It for her first time on UT! Thank you to Edwin for showing her the ropes and being a great scenic designer.

Clare Kemmerer (Assistant Costume Designer) is a Religious Studies and Classics major. As You Like It will be her first show at the University of Chicago.

Maxine King (Assistant Props Designer) is a first-year Math and Computer Science major. This is her first UT show, but she's looking forward to participating in more productions in the future.

Gabe Hull (Assistant Sound Designer) is a first-year and currently undecided. Although this is his is his first production since his 4th grade musical, he is excited to get involved and learn more. He also brings previous sound design and engineering experience from involvement in music.

Ian Grant-Funck (Dean's Men Board Liason/Fight Choreographer) is a second-year double majoring in Fundamentals and Public Policy. He has previously worked on every Dean's Men show possible. He is also the Dean's Men Education Chair and really likes the Dean's Men a lot.