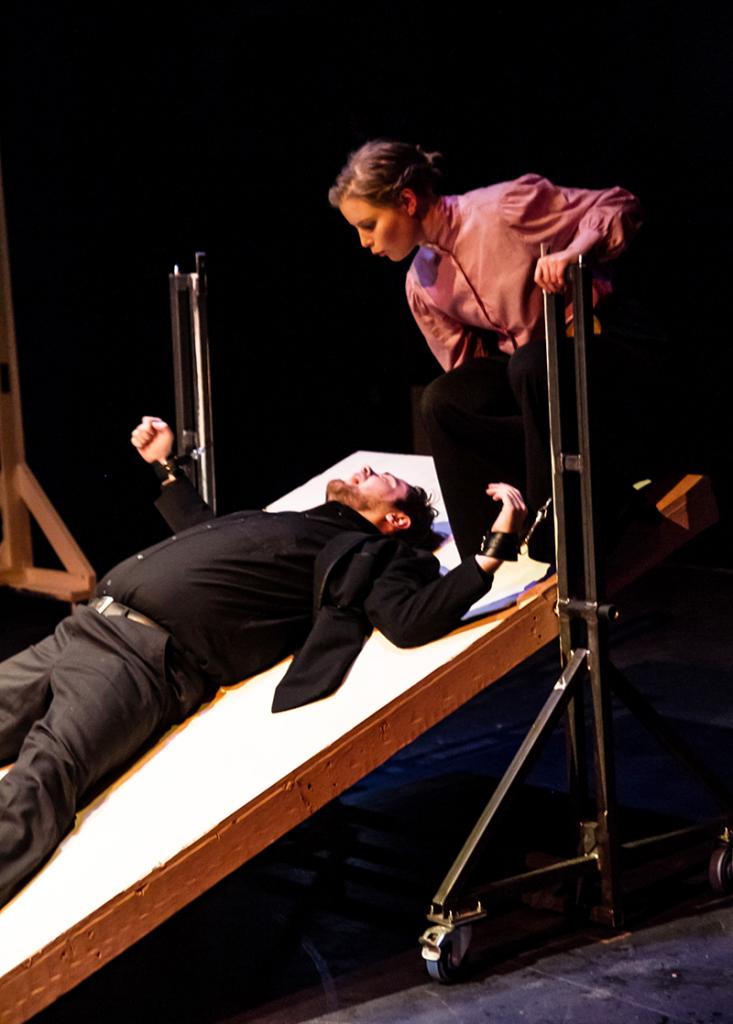 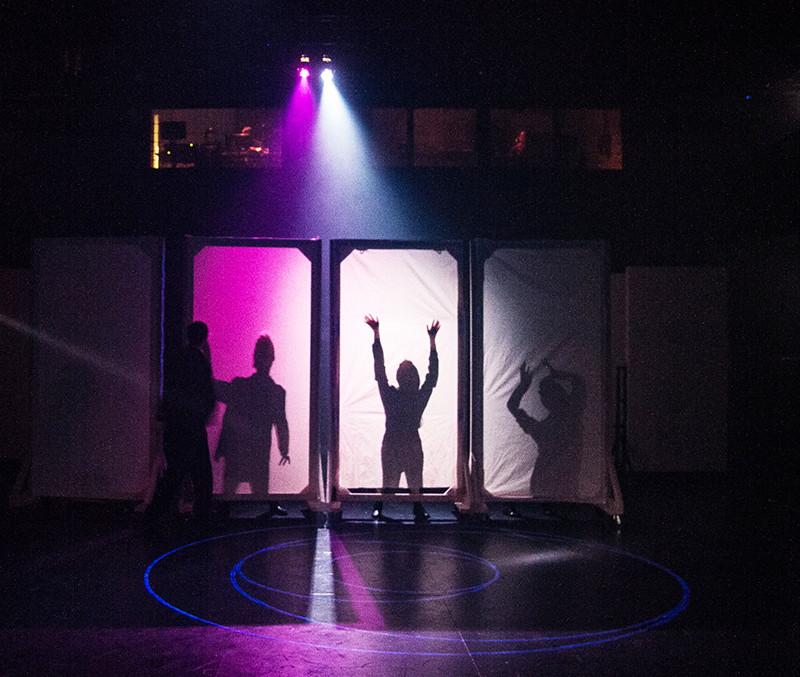 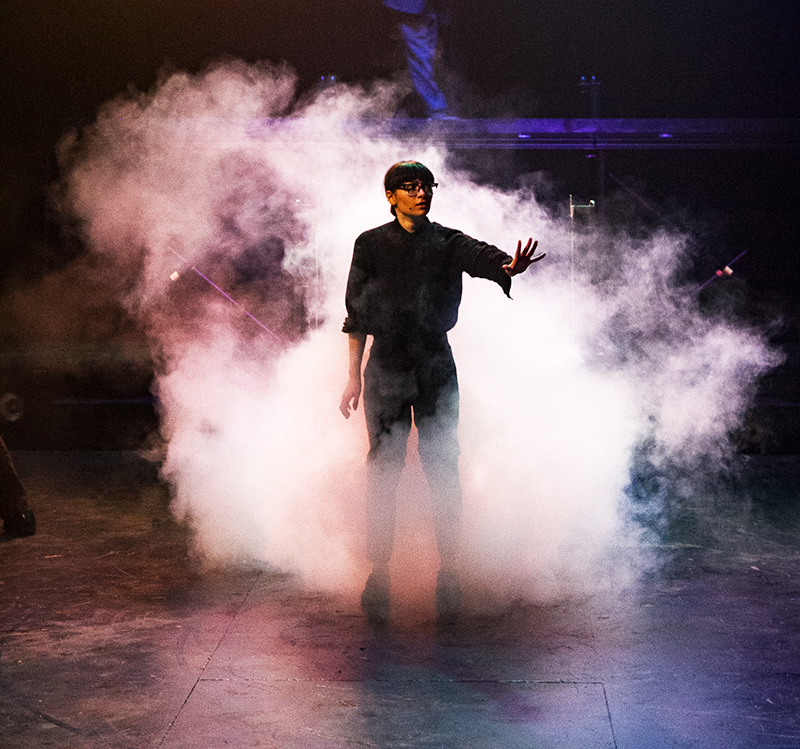 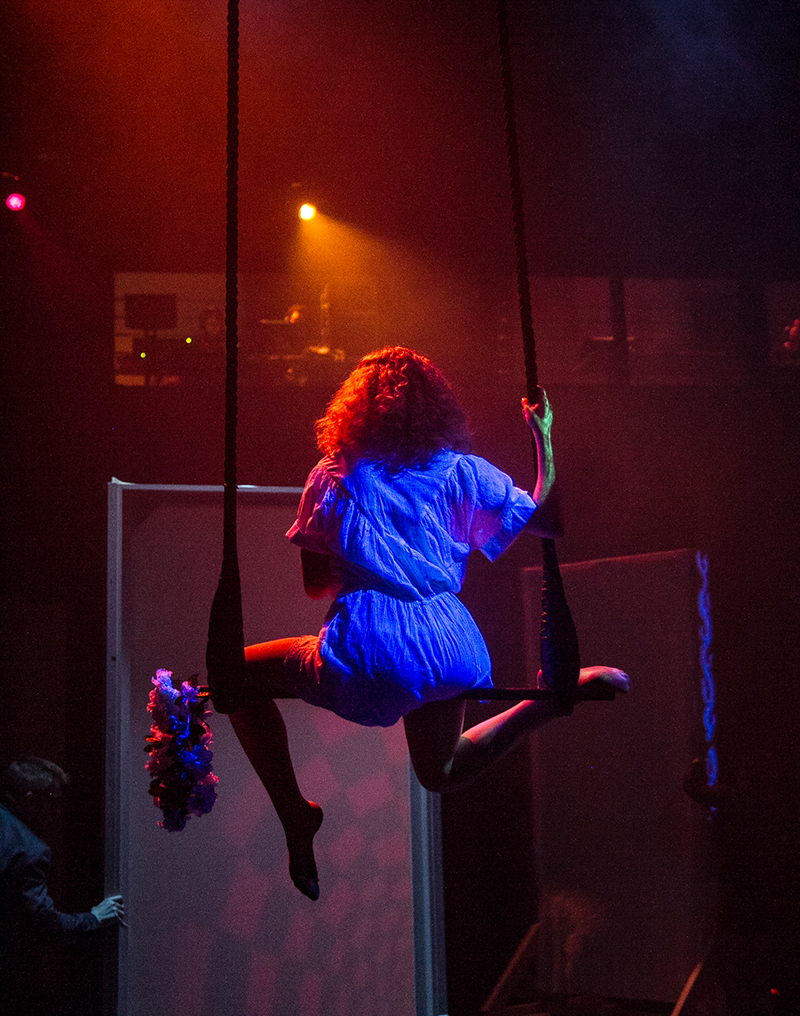 Through the lens of James Joyce's Ulysses, Circe leads the audience on a journey full of hallucinations, confrontations, and (dis)illusions exploring the dark corners of Nighttown, Dublin’s Red Light District, with our two protagonists Bloom and Stephen. Presented in thrilling promenade style staging, we follow the characters as they embark on an elaborate fantasy that motivates our own pursuit for a lasting manifestation of self.

Hope Gundlah (Zoe) is a first-year double-majoring in English and Theatre & Performance Studies. She has been involved with University Theatre and Maroon TV. Past credits include Comedy of Errors (First Merchant/Second Merchant/Messenger).

David Lovejoy (Stephen Dedalus) is a fourth-year majoring in TAPS. He is a graduate of the ACADEMY at Black Box and a founding ensemble member and company manager of Chimera Ensemble. Past credits include A Winter's Tale (Florizel), The Merchant of Venice (Antonio), Endgame (Hamm), and Richard II (King Richard). He looks forward to continuing his acting career after college.

Emily Lynch (Kitty) is a first year planning to major in English and Political Science. Past credits include The Merchant of Venice (Salerio).

Nicholas Marchese (Lynch) is a currently undecided first year who is interested in the Sciences. This is his first acting role in a University Theater production, and last quarter he worked on After the Revolution as a Master Carpenter.

Coriander Mayer (Bella/Bello) is a third-year student majoring in TAPS and indecision. She is excited to return to acting and continue her focus on devised work. In the past, Cori has worked as a lighting designer both professionally (select credits: Adventure Stage Chicago, Eleusis Collective, Bread and Roses, UBallet) and with University Theater (select credits: By the Bog of Cats, The Monkey King, Romeo and Juliet, After the Revolution). Cori has also directed two workshops with UT, The Candles and Pericles, but Marxist. She also was the Master Electrician for Circe.

Patrick McCarthy (Bloom) is a fourth-year in the college majoring in English and Linguistics. Past credits include Romeo and Juliet (Lord Capulet), By the Bog of Cats (Xavier), Twelfth Night (Malvolio), Rumors (Ken), and Comedy of Errors (Dramaturg).

India Weston (Rudy Bloom) is a second-year prospective Interdisciplinary Studies in the Humanities major and transmedia performance artist. She began acting with the Classical Entertainment Society in their version of Medea (Medea), and since then, has appeared in various University Theater productions including: By the Bog of Cats (Josie Swane), and House of Cards, which she helped devise. She has written and directed four Theater[24] plays and is currently working on Alternate Reality Games with Patrick Jagoda.

Natalie Wagner (Stage Manager) is a student in the College.

Corson Barnard (Costume Designer) is a fourth-year TAPS major. Previous UT credits include Urinetown (Vocal Director), West Side Story (Vocal Coach), New Work Week 2016 (GATSBY: The Musical - Composer/Director), and After the Revolution (Assistant Costume Designer). She also appeared in the TAPS revues The Girl Show, Home is Implied, and Pressure? We Hardly Know Her. Corson also serves as the Media Manager for TAPS Student Staff and is the music director of her co-ed a cappella group, The Ransom Notes.

Maya Jain (Scenic Designer) is a second year majoring in TAPS. Her past involvement with University Theater includes A Weekend of Workshops (Flask), By the Bog of Cats (Asst. Scenic Designer), West Side Story (ASM), and After the Revolution (Scenic Designer). She also currently performs with and is on the board for Iris Theater Troupe.

Elizabeth Ortiz (Lighting Designer) is a third year in the College, excited to be light designing her first show. Former UT credits include By the Bog of Cats, After the Revolution, and Workshops. When she's not involved with UT, she acts as the president of Unaccompanied Women and dances with University Ballet.

Stephanie Slaven-Ruffing (Sound Designer) is a third year majoring in anthropology and comparative human development. She has previously worked as a sound designer on Comedy of Errors, Romeo and Juliet, the dance collaboration Navarasa: Reimagined, and House of Cards.

Charlie Lovejoy (Dramaturg) is a third-year English literature major with previous experience in management, fight choreography, and props design. They’ve loved the opportunity to add literary dramaturgy to that list this quarter on Circe, but remain primarily a stage manager: UT credits include Mr Burns, West Side Story, By the Bog of Cats, Miss Julie, All choiceless She, Context, Marigolds, and Amadeus. Charlie is also a curator for Theater[24] and a member of UT’s Committee.

Olivia Malone (Catwalk Crew) is a second-year currently in between majors. Please let her know if you need objects raised to or lowered from your own catwalk.

Eli Harter (Assistant Set Designer) is a student in the College.

Jacob Goodman (Committee Liaison) is a second year in the college majoring in Comparative Human Development and Visual Art. Past work includes Comedy of Errors (Director), The Seagull (Konstantin) and Twelfth Night (Duke Orsino). He is a current member of UT Commitee.