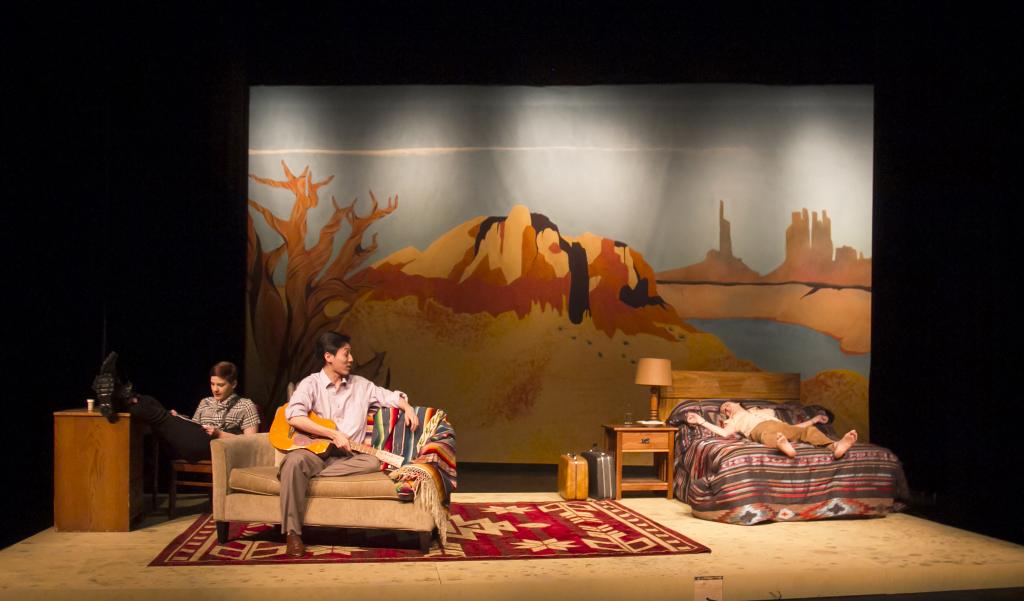 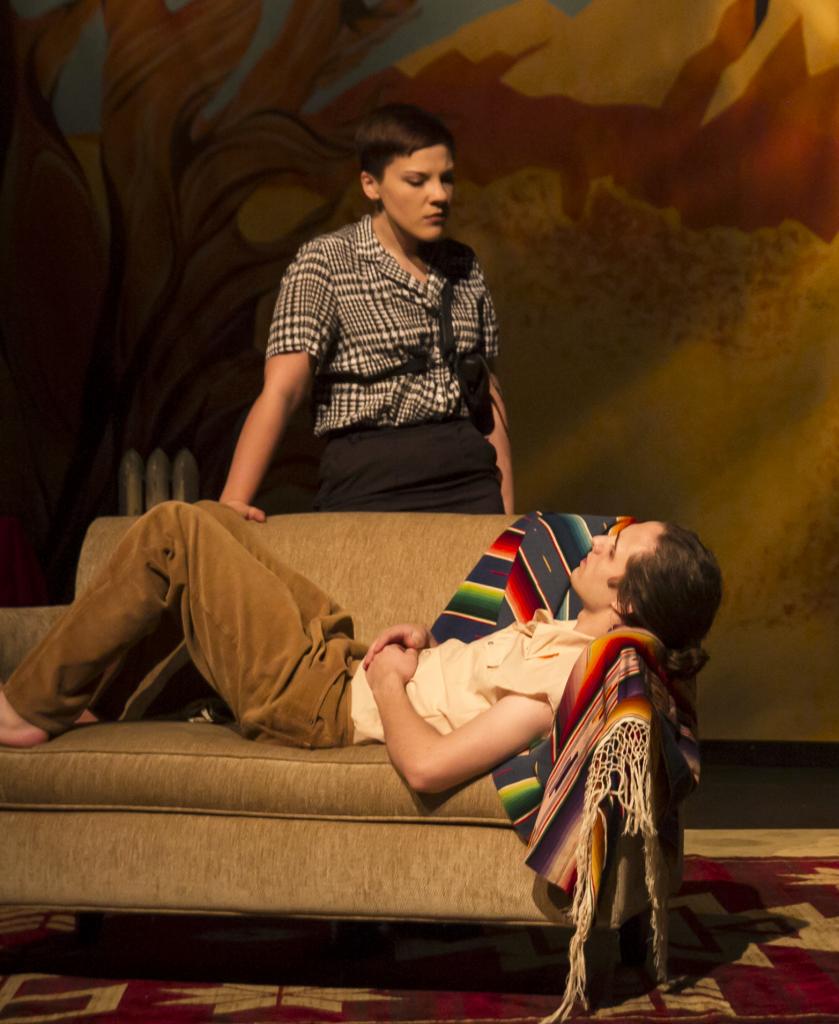 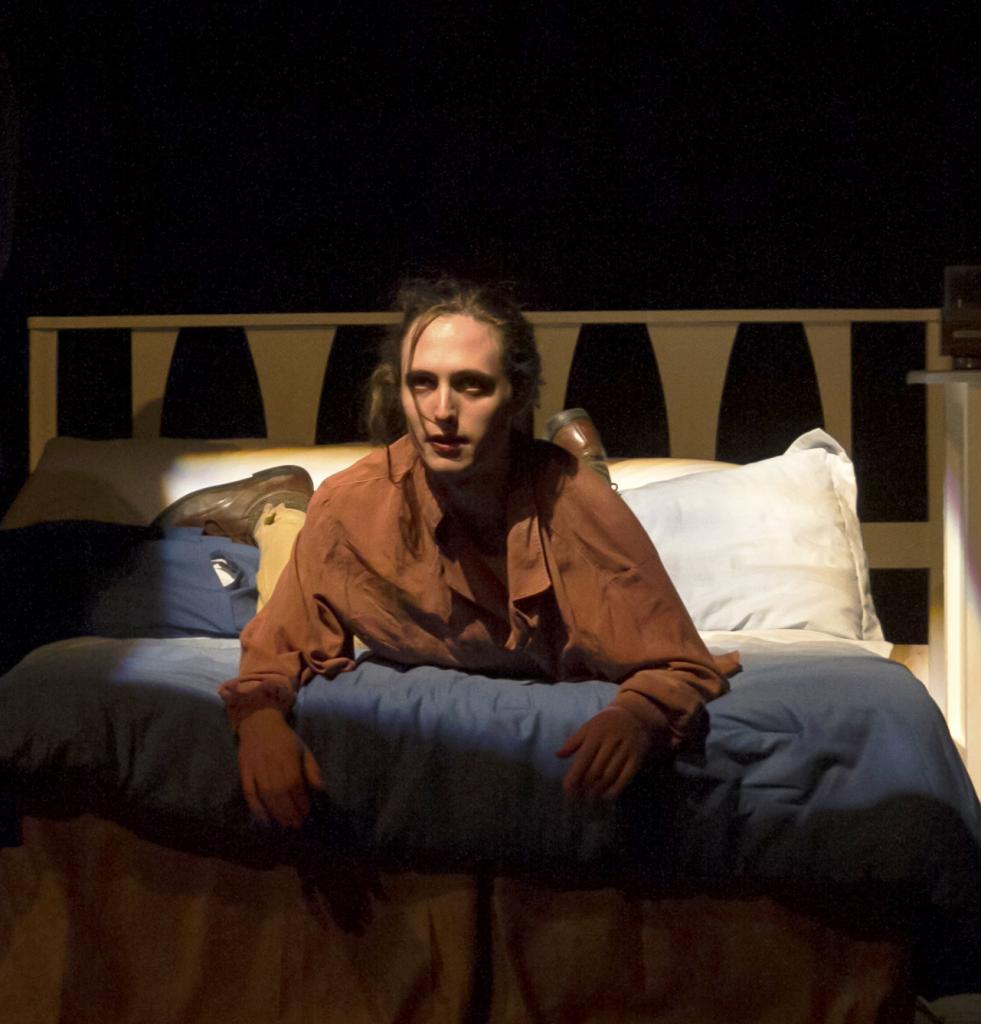 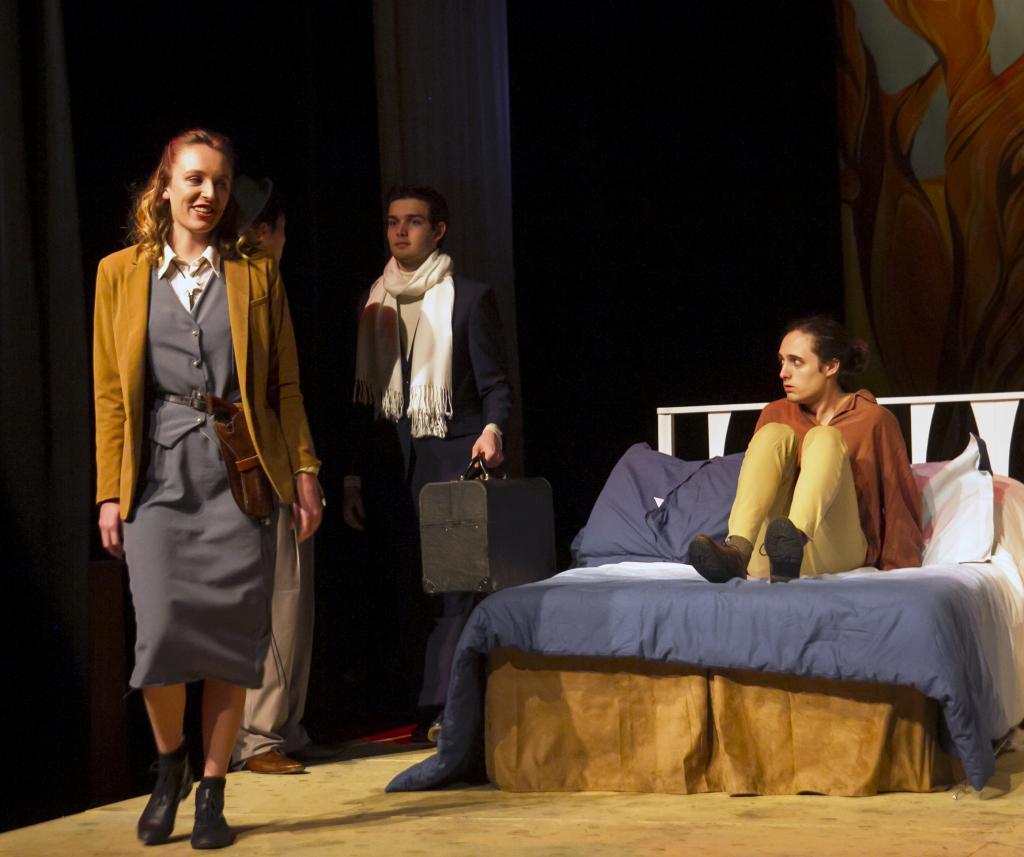 Sam Shepard’s Geography of a Horse Dreamer tells the story of Cody, a “dreamer” who can predict the outcome of horse races in their dreams. Si Squires-Kasten's imaginative production adapts this western to answer questions about gender, art, and the American Dream when a visionary is held captive by the selfishness of the world around them.

Alexandre "Xandre" Eichner [they/them/their] (Cody) is a fourth-year majoring in Sociology and Mathematics. Past UT credits include Miss Julie, The Seagull, and Merchant of Venice (Dramaturg), as well as several acting credits. They hope to pursue a Master's degree in Sociology next year in the UK or elsewhere.

Grace Bolander (Santee) is a third-year TAPS major. She has previously performed in UT's productions of Macbeth (Lady Macbeth), By the Bog of Cats (Hester Swane), The Winter's Tale (Paulina), The Merchant of Venice (Portia), and in UT's New Work Week and Weekend of Workshops. She has also performed outside of the University in Actors' Theatre of Columbus productions of Hamlet (Hamlet) and Romeo and Juliet (Juliet), as well as Curtain Players' premiere of Robin Hood and the Secret of Sherwood (Marian). Grace returns to Court Theatre this year as its Marketing Intern, where she was Casting/Education intern last year.

Gavin Pak (Beaujo) is a fourth year double majoring in TAPS and English Literature. His last UT credit was in West Side Story as Chino. Previous credits include the Constable in Fiddler on the Roof and Courferyac in Les Mis.

Thomas Meerschwam (Doctor) is a fourth year majoring in Economics and minoring in Art History. He has been involved with University Theater, Fire Escape Films, and the Dean's Men. Past credits include: Hedda Gabler (George Tesman), Henry V (King of France), The Seagull (Yevgeny Dorn), and Romeo and Juliet (Prince Escalus). He will be working in art business after college but is also interested in the entertainment/film industry.

Si Squires-Kasten (Director) is a third-year English major. Prior to directing Geography of a Horse Dreamer, he adapted and directed the independent production of Wittgenstein's Mistress, and acted in the UT/TAPS collaboration House of Leaves and the Dean's Men Production of Love's Labour's Lost (Boyet).

Zoe Berra (Production Manager) is a fourth year majoring in Computer Science. Previous involvement includes Merchant of Venice (Props), Noises Off (ASM), and Hamlet (APM), as well as numerous shows with Le Vorris & Vox Circus, of which she is President.

Leah Ochroch (Stage Manager) is a third year in the ISHum department, studying the history of pop culture in the 20th century. This is her first University Theater show, although she has stage managed for the show Wittgenstein's Mistress in the past. When not doing theater, Leah attends board meetings for Le Vorris and Vox Circus and occasionally performs on lyra or trapeze. Leah has also designed costumes and props for CES. Ask her about comic books sometime if you feel like having a very intense, very long discussion which will last approximately three times longer than you want it to.

Cameron Bernstein (Lighting Designer) is a first year in the college. She is a tentative pre-med student hoping to major in economics. She has previously been involved with University Theater as the assistant lighting designer for Iphigenia and Other Daughters.

Peyton Walker (Scenic Designer/Paint Master) is a third year Art History and DOVA major. She has had extensive involvement with UT as an actor and designer. Past favorite roles include Kate in Wittgenstein's Mistress, Brooke/Vicki in Noises Off, and Salanio in The Merchant of Venice. Peyton was also costume designer for the Dean's Men's production of Hamlet and is currently the Secretary of the Dean's Men Board. This is her first time as a scenic designer (and her first time painting something this big!).

Abi Hunter (Set Design) is a second year majoring in Linguistics. She has been involved with University Theater, the Classical Entertainment Society, and Commedia. Past credits include By the Bog of Cats (Assistant Set Design), Weekend of Workshops Autumn 2016 (Director), Medea (Second Corinthian Woman), The Bacchae (Agave), University of Chicago Commedia (La Signora), and The Bald Soprano (Mary).

Dan Lastres (Sound Designer) is a third year majoring in English. He's been sound designing and composing music for UT productions for two years and is a performing member of Occam's Razor.

David Lovejoy (Dialect Coach) is a fourth year majoring in Theater and Performance Studies. He has been involved with University Theater, is a graduate of the Academy at Black Box, and is a founding ensemble member of Chimera Ensemble. Past credits include The Tempest (Director), The Merchant of Venice (Antonio), and Endgame (Hamm). He looks forward to continuing his career as an actor and artist after he graduates this year.

Stephanie Slaven-Ruffing (Dramaturg) is a third year majoring in Anthropology and Comparative Human Development. Past credits include sound designer on Circe, Comedy of Errors, Romeo and Juliet, Wittgenstein's Mistress, and House of Cards, in addition to assistant designing on numerous productions.

Quinn Kane (Assistant Costume Designer) has several acting credits in UT, but this is his first time on Production Staff. He is excited to be working on costumes!

Amelia Soth (Assistant Costume Designer) is a student in the College.

Emily Stevens (Assistant Props Master) is a first year majoring in English. She has been involved with University Theatre and Fire Escape Films. Past credits include Iphigenia and Other Daughters (Assistant Costume Designer), and Death Window (Salon Receptionist).

Nadiah Wong (Assistant Lighting Designer) is a first-year undergraduate student. She has been involved with University Theater. Past credits include Iphigenia and Other Daughters (Ensemble).

Phoebe Kyritsis (Assistant Sound Designer) is a student in the College.

Peter Xu (Pianist) is a fourth year majoring in math. This is his first and last University Theater show.

Alexander Lecocq (Master Electrician) is a student in the College.

Jessica Robinson (Assistant Stage Manager) is a student in the College.

Anna Aguiar-Kosicki (Assistant Scenic Designer) is a student in the College.

Natalie Kieruzel (Assistant Scenic Designer) is a student in the College.

Dee Nitz (Committee Liaison) is a student in the College.

Sydney Purdue (Tech Staff Liaison) is a third-year Statistics major. This quarter, she is also the scenic designer for Mr. Burns.