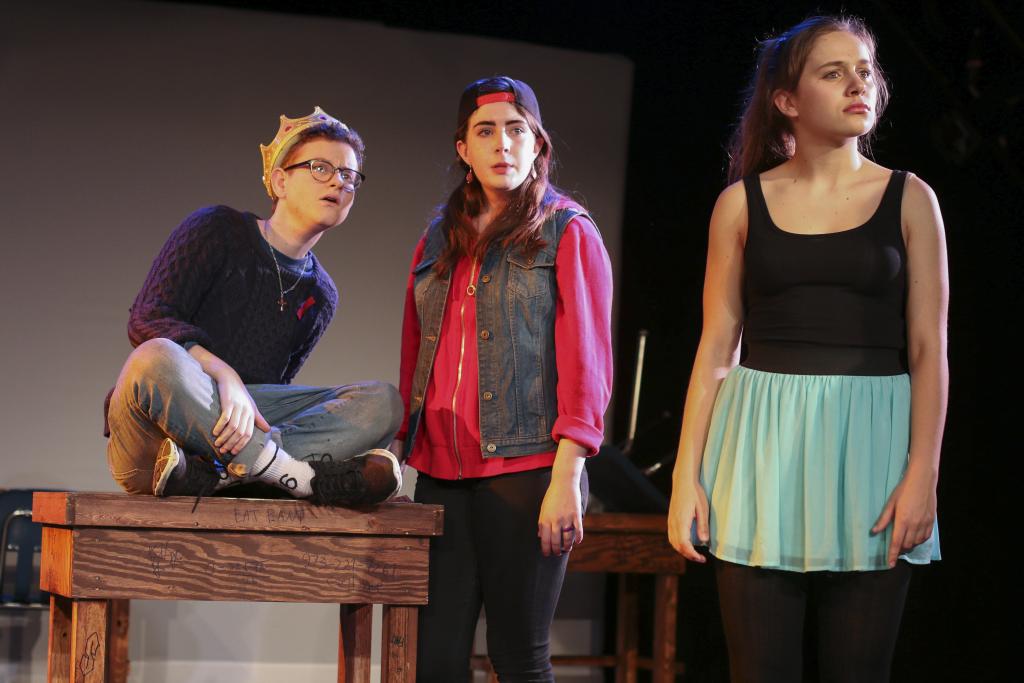 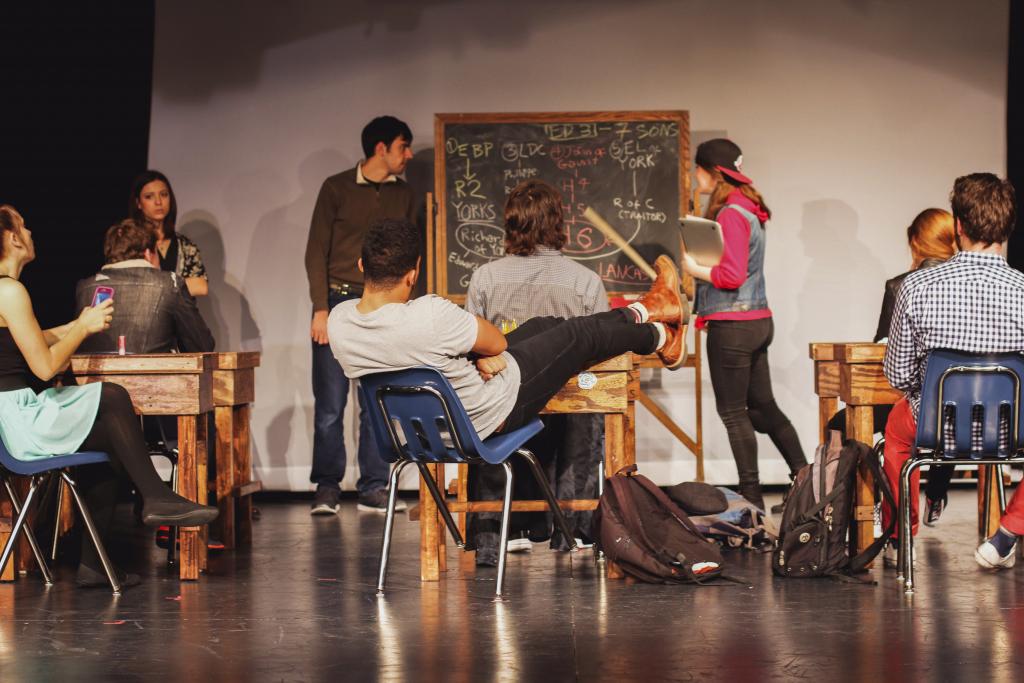 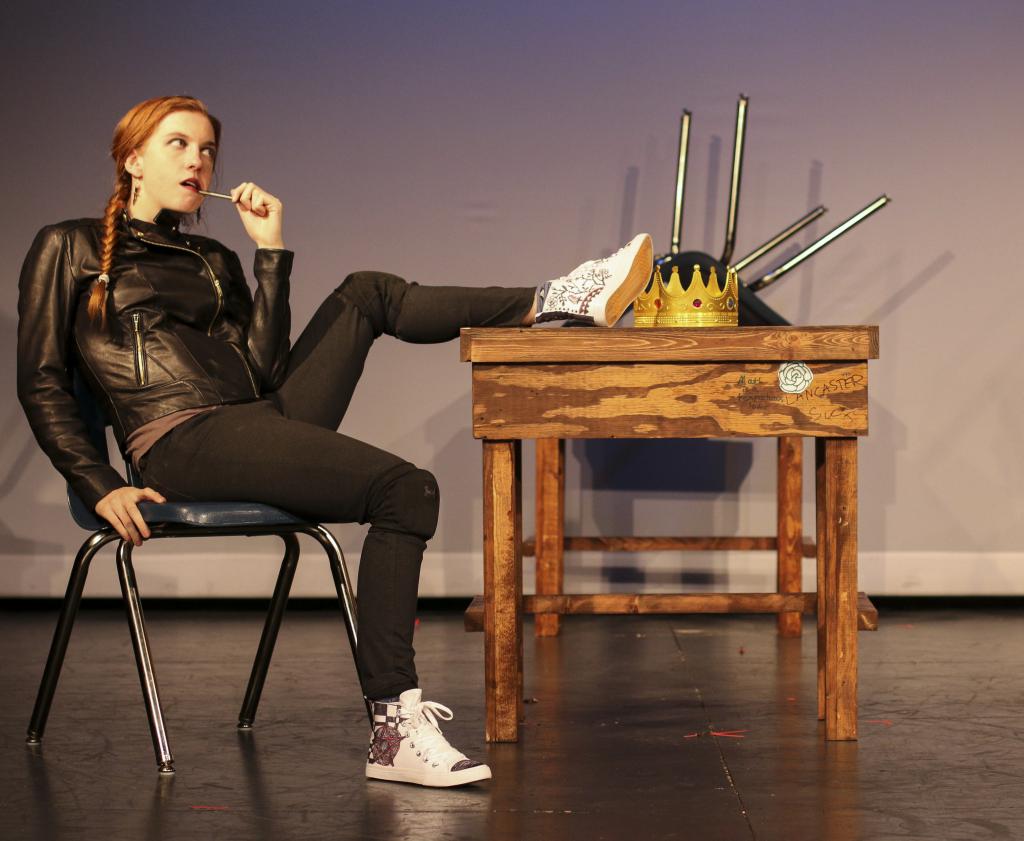 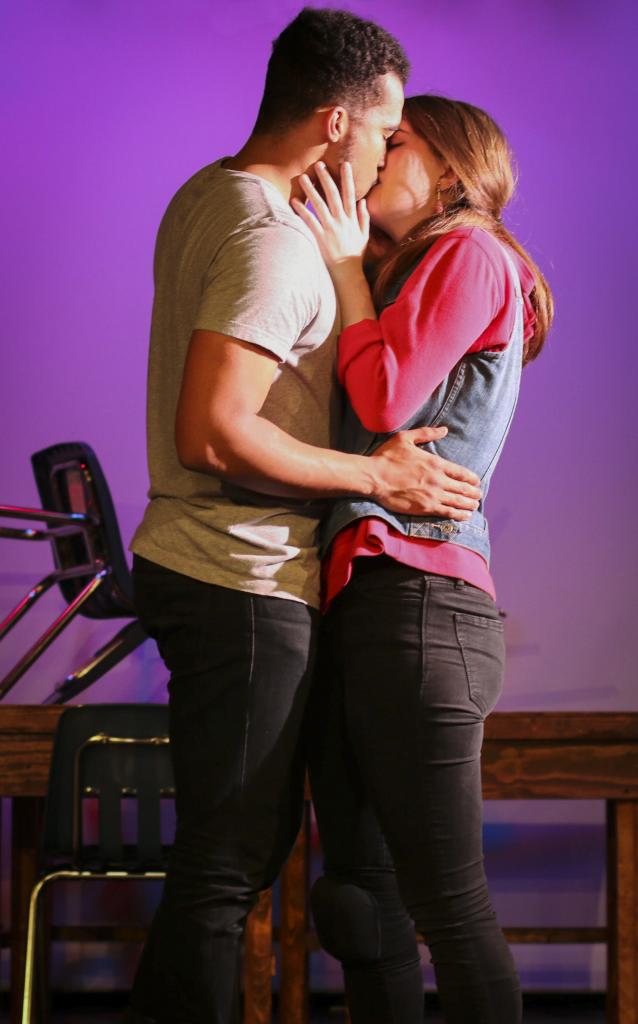 It's the War of the Roses unlike ever before: within the confines of a classroom, schoolyard rules and storied rulers will be tested. Witness history conjured up—a chalkboard sketches the royal lineage and counts the dead, yardsticks stand for swords, paper airplanes and ink for arrows and blood, as the noble Houses of York and Lancaster renew their bitter struggle for the Crown of England. The text of Shakespeare will temper students and kings as they wonder: will chaos or convention reign at battle's end?

Bella Bagatelos (York) is a first year in the college, and this is her first UT/Dean's Men show. In the past she has performed at various professional and community theatre companies as well as her high school in her hometown of Sacramento, CA. On campus she is also a member of Women in Business and Fire Escape Films. She hopes you enjoy the show!

Emma Glass (Warwick) is a student in the college.

Ian Grant-Funck (Winchester & Clifford) is a first year in the college. He is thrilled to be returning to the FXK for a second quarter in a row. He previously appeared as Dromio in the Dean's Men production of the Comedy of Errors.

Seph Mozes (Henry VI) is a student in the college.

Thomas Noriega (Edward VI) is a first year planning to major in Public Policy and Philosophy. He is involved in both University Theater and Model UN. He played Ben Joseph in last quarter's production of After the Revolution, and was in several productions in high school which only his dad remembers.

Ronen Schatsky (George of Clarence) is a first year, likely majoring in Public Policy. Henry VI is the first theatrical production he has participated in at UChicago so far. He hopes to stay involved with theater at college in future years.

Faith Shepherd (Somerset) is a first year Neuroscience major. This is her second UT production and her first Dean's Men show. Previous credits include Jessica in Merchant of Venice. Current hopes and dreams include seeing some actual snow winter quarter, drinking copious amounts of green tea, and making it through first year without pulling an all nighter.

Jakob Solheim (Salisbury & Rutland) is a third-year public policy and economics major. He is thrilled to be returning to the Dean's Men for a fourth production after appearing in Hamlet (Rosencrantz), Twelfth Night (Sir Andrew), and Love's Labour's Lost (Dull, Mercade), and is delighted to be acting in his eighth show at UChicago.

Michaela Voit (Margaret) is a fourth-year majoring in English and Public Policy. She has served on the Dean’s Men Board and UT Committee while acting in UT shows such as After the Revolution (Mel), The Seagull (Arkádina), Miss Julie (Kristine), Cowboy Mouth (Cavale), Much Ado About Nothing (Beatrice), and A Midsummer Night’s Dream (Helena). Currently, she serves as Treasurer on the Dean’s Men Board and recently appeared as Hermione in TAPS Presents: A Winter’s Tale.

Chase Woods (Suffolk & Richard) is a fourth year majoring in Public Policy with a focus in Urban Education. He has previously served as the Social Chair of the Dean's Men. Previous credits include Henry V (Henry), Love's Labour's Lost (King Ferdinand), and Hamlet (Laertes).

Carolyn Applebaum (Dramaturg) is a first year in the College who remains undecided on her major, as well as on life in general. Past UT credits include Theater[24] and Iphigenia & Other Daughters (ASM).

Laura Bevington (Director) is a third-year student in the college majoring in TAPS. Previous show credits include Romeo and Juliet (Romeo) and Twelfth Night (AD). They are dreadfully excited to be directing their first show!

Alison Causey (Lighting Designer) is a second year in the college, majoring in linguistics.

Daniel Heins (Master Electrician) has performed with Le Vorris and Vox Circus for several years. Credits include two performances at the Lascivious Ball (Naughty Boy #2, Guy Who Can Hang) and The Monkey King (Leading Horse/Embodiment of Hell).

Sophia Lubarr (Assistant Stage Manager) is a first year hesitantly majoring in Computer Science and English. Her past show credits include ASM for the Comedy of Errors, and she is excited to continue working with UT and the Dean's Men.

Michelle Noyes (Stage Manager) is a second-year biology major. Her past show credits include Twelfth Night (ASM), The Seagull (ASM), and the Comedy of Errors (APM). She's so happy to be back at home with the Dean's Men.