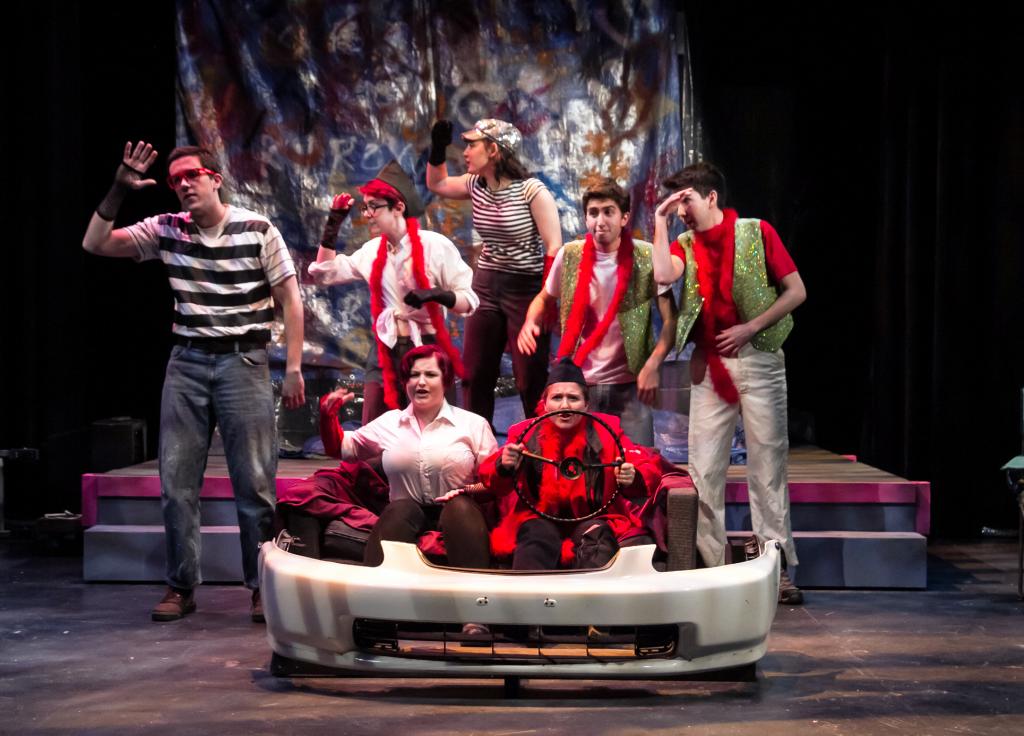 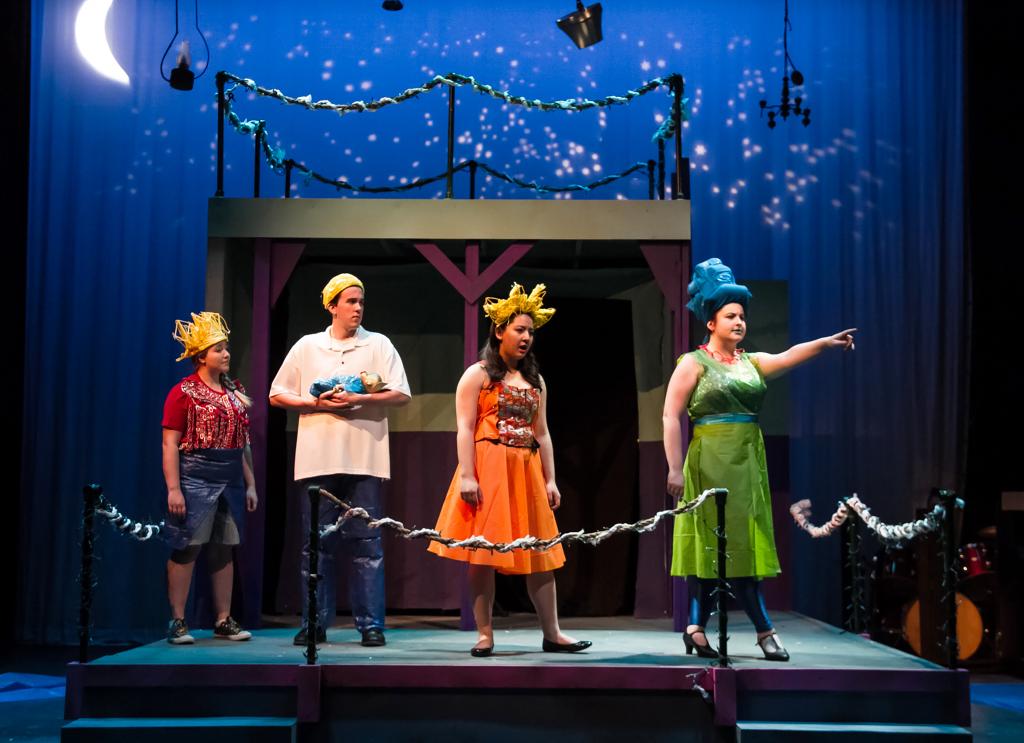 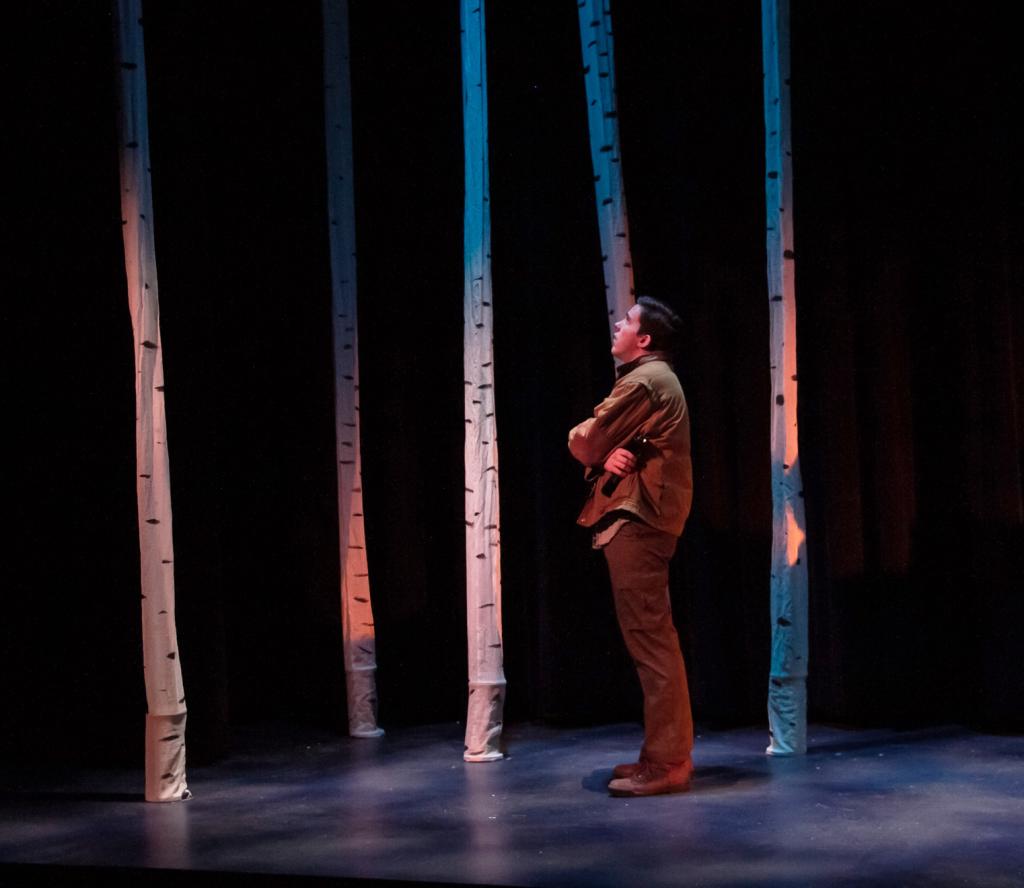 With the planet as we know it left in ruins, people who have survived reminisce about mass media to pass the time. After decades of remembering and retelling plots, a Simpsons episode is transformed into a performance that integrates ritualistic spectacle and campy musical theater to light the way in the darkest times.

Hana Eldessouky (Jenny / Lisa) is a first year majoring in English. She was previously involved in Comedy of Errors (Assistant Lighting Designer). this is her first UT show as an actor.

Connor Fieweger (Troy) is a second year majoring in Physics and Fundamentals: Issues and Texts. His previous UT credits include West Side Story (Action) and Urinetown (Old Man Strong/Hot Blades Harry). Other roles include Enjolras (Les Miserables) and Lord Farquaad (Shrek! The Musical). He would like to especially thank the direction and production of Mr. Burns for their understanding and flexibility, and of course dedicate this role to that one picture of Lil Wayne falling off a skateboard.

Rob Geada (Sam / Itchy) is a fourth-year Physics major in the college. He has acted in Much Ado About Nothing (Claudio), Romeo and Juliet (Benvolio), Merchant of Venice (Launcelot), and sound designed Krapp's Last Tape and Hamlet.

Rebecca Husk (Colleen / Bart) is a second year in the College majoring in philosophy. Past UT credits include Romeo and Juliet (Lady Montague) and The Merchant of Venice (Nerissa). She also sings with Men in Drag all-female a cappella and is the president of AcaCouncil, as well as a member of UT Committee.

Julianne Lorndale (Apu) is a first-year majoring in Medieval Studies. She began her involvement in University Theater last quarter in the Comedy of Errors (Luciana). She hopes to be employed after college.

Louise Simpson (Willy) is a fourth year in the college majoring in Comparative Human Development and Environmental Studies. She has been involved with University Theater as an actor in Grey Gardens and Rumors previously. After college, she hopes to go into journalism.

Emil Sohlberg (Milhouse) is a first year, and this is his first UT show! He is probably going to major in math. Emil really enjoys theater, and hopes to be in many more shows in the years to come.

Katy Surhigh (Nelson) is a third-year English major in the College. Previous UT credits include A Winter's Tale (ASM), The Seagull (ASM), and Urinetown (Billy Boy Bill). She has previously stage managed for UChicago Commedia and will be stage managing Lear next quarter. She is also a member of UT Committee, A Cappella Council (Vice President/Secretary) and Rhythm and Jews (Vice President).

Lexi Turner (Maria/Marge) is a fourth year majoring in Theater and Performance Studies. She has worked with UT in a few capacities, including acting in shows such as Rumors (Cookie) and Romeo and Juliet (The Nurse) and directing a workshop (Woman on Trial), as well as a mainstage (Iphigenia and Other Daughters). She is also the Dean's Men liaison to UT Committee, Event Coordinator of Student Staff, and president of U of C Commedia.

Alex Hearn (Director) is a fourth-year in the College studying Public Policy. A life-long Simpsons fan, he'd like to thank Lisa (a Simpsons fan) and Chris (not really a Simpsons fan) for their support and guidance. Previous directing credits include Noises Off, Rumors, and The Still Alarm. Previous acting roles include By the Bog of Cats (Young Dunne/Ghost Fancier), Officer Lockstock (Urinetown), Suburbia (Jeff), and Endgame (Nagg). He also clown coached for Comedy of Errors and Krapp's Last Tape and clowns around with UChicago Commedia.

Kovi Shlomchik (Production Manager) is a fourth-year in the College studying Biology. Mr. Burns is their thirteenth show, and sixth time production managing with University Theater. In the last year they have production managed The Seagull and the Comedy of Errors.

Charlie Lovejoy (Stage Manager) is a third-year English literature major from Minneapolis, where they stage managed community and professional productions before moving to Chicago. Since then, Charlie’s stage management credits include West Side Story, By the Bog of Cats, Miss Julie, All choiceless She, Context, Marigolds, Amadeus (UT), You On The Moors Now (The Hypocrites), and various others. This past summer, they were the stage management intern on workshops of Pinocchio, The Nutcracker, The Great and Terrible Wizard of Oz, Verboten, Missing (The House Theatre), and Aristophanesathon (The Hypocrites). Charlie is also a member of UT’s Committee and a curator for Theatre[24].

Julia Aizuss (Dramaturg) is a third-year in the College majoring in English & Classics. She has previously served as a dramaturg for the Classical Entertainment Society.

Ellen Wiese (Music Director) is a fourth-year BA/MAPH student studying English and Creative Writing. Past UT credits include the Comedy of Errors (Props Designer), Ex Libris (Stage Manager), and West Side Story (Floor Manager). She hopes to work as a writer and arts administrator after college.

Will Myers (Vocal Director) is a third year music major in the college. Mr. Burns is his University Theatre debut, but he is involved in performance and direction with multiple choirs on campus. Will is interested in education and plans to pursue a career in teaching and choral conducting.

Emily Lovett (Vocal Director) is a second-year majoring in Music and English Literature. Past credits include Hamlet (Guildenstern) and West Side Story (Velma). She also is a member of UChicago's Women's Ensemble.

Itzel Blancas (Costume Designer) is a fourth year in the college majoring in Comparative Literature and TAPS. She has previously been involved with University Theater as a Costume Designer (Amadeus, The Effect of Gamma Rays on Man in the Moon Marigolds, Miss Julie, By the Bog of Cats), Director (West Side Story, What a Wild Party!), and an assistant in various capacities. She is a member of Tech Staff, is the Tech Staff rep in Committee, and is one of the Curators for Theater[24].

Sophie Downes (Sound Designer) is a fourth-year English major. She has previously worked in UT as a director (Dusk Before Fireworks), assistant sound designer (By the Bog of Cats, Rumors), production manager (Winter Workshops 2015, Apsara), assistant production manager (Henry V, Fool for Love, As You Like It), and sound board operator (Noises Off).

Casey McKenna (Lighting Designer) is a second-year majoring in Spanish and Comparative Human Development. This is her first time involved with University Theater.

Colin Garon (Props Designer) is a third year majoring in HiPSS. As a props designer, he specializes in food, dead birds, and the uncanny. He has previously designed for Amadeus, among other plays.

Emily Cambias (Props Designer) is a student in the College.

Monica Brown (Choreographer) is a second-year English major. She is also a Scav captain and on the staff of Sliced Bread. Past work on University Theater shows includes assistant choreographing West Side Story.

Olivia Malone (Assistant Production Manager) is a second-year currently between majors. Her recent UT credits include Circe (Crew), Winter 2017's Weekend of Workshops (PSM), and Iphigenia and Other Daughters (SM).

Victoria Keating (Assistant Stage Manager) is a first-year in the college currently undecided. She has been involved with this fall's Weekend of Workshops (Stage Manager) and After the Revolution (Backstage Crew). She hopes to continue working with UT on more productions.

Anaïs Ahmed (Accordion) is a recent alumna of the College, having graduated in 2016. This is her first involvement with University Theatre.

Jacob Spiegel (Auxiliary Percussion / Assistant Set Designer) is a first-year majoring in Computer Science. He has previous worked on the Comedy Of Errors (Assistant Sound Designer).

Amanda Wilson (Drums) is a second year majoring in Chemistry. She has been involved in University Theater and University Wind Ensemble during her time at UChicago. Past credits include The Seagull (Assistant Sound Designer), and she hopes to keep her love for music alive after graduation.

Alicia Zhao (Pianist) is a fourth year in the college. She has been involved with University Theater as a musician, as well as an ensemble member of UChicago Commedia since first year.

Anna Aguiar Kosicki (Assistant Costume Designer) is a first year in the College prospectively majoring in TAPS and Political Science. Their UT credits include Iphigenia and Other Daughters (Assisant Director), the Comedy of Errors (wardrobe run crew), and Geography of a Horse Dreamer (Assistant Scenic Designer). She also directed for Iris and is a member of the Leaders of Color initiative at the IOP.

Sophie Hoyt (Assistant Costume Designer) is a second-year in the College majoring in English. Previous UT/TAPS credits include After the Revolution (Emma), West Side Story (Assistant Director), All choiceless She (Andromeda), and Miss Julie (Mother) as well as two performances with Fire Escape Films, in Tom and Last Call.

Corson Barnard (Stitcher) is a fourth-year TAPS major. Previous credits include Circe (Costume Designer) and After the Revolution (Assistant Costume Designer), as well as several music direction, composition, and performance credits. Catch her BA thesis -- a musical revue based on A Wrinkle in Time -- next quarter!

Dee Nitz (Stitcher) is a fourth-year TAPS major in the College. Previous costuming credits include After the Revolution (Designer) and Circe (Assistant Designer).

Larkin Smith (Assistant Set Designer / Painter) is a second-year in the college, studying Fundamentals and Human Rights. Thus far, she has been involved in a University Theater production every quarter that she has been at UChicago, including Urinetown (Soupy Sue), Hamlet (Assistant Props Designer), West Side Story (Graziella), and the Comedy of Errors (Adriana). You can also see her perform with the co-ed a cappella group, the Ransom Notes.

Belen Edwards (Assistant Set Designer) is a first-year majoring in music. She appeared in Iphigenia and Other Daughters (Chorus).

Felix Lecocq (Assistant Sound Designer) is a first-year at the college. Past credits include Iphigenia & Other Daughters (Orestes). This is his first time designing a show.

Eren Ahn (Props Assistant) is a second year Biology major/Visual Arts minor in the College. She has previously designed with University Theater and MaroonTV and managed/designed with Iris. Past credits include After the Revolution (Costume Assistant) and Singularity (Props Designer). She will probably be stuck in the academia hell that is grad school after college.

Poorvaja Rajagopalan (Props Assistant) is a second-year majoring in History.

Brandon McCallister (Committee Liaison) is a student in the College. Catch his show She Kills Monsters next quarter!