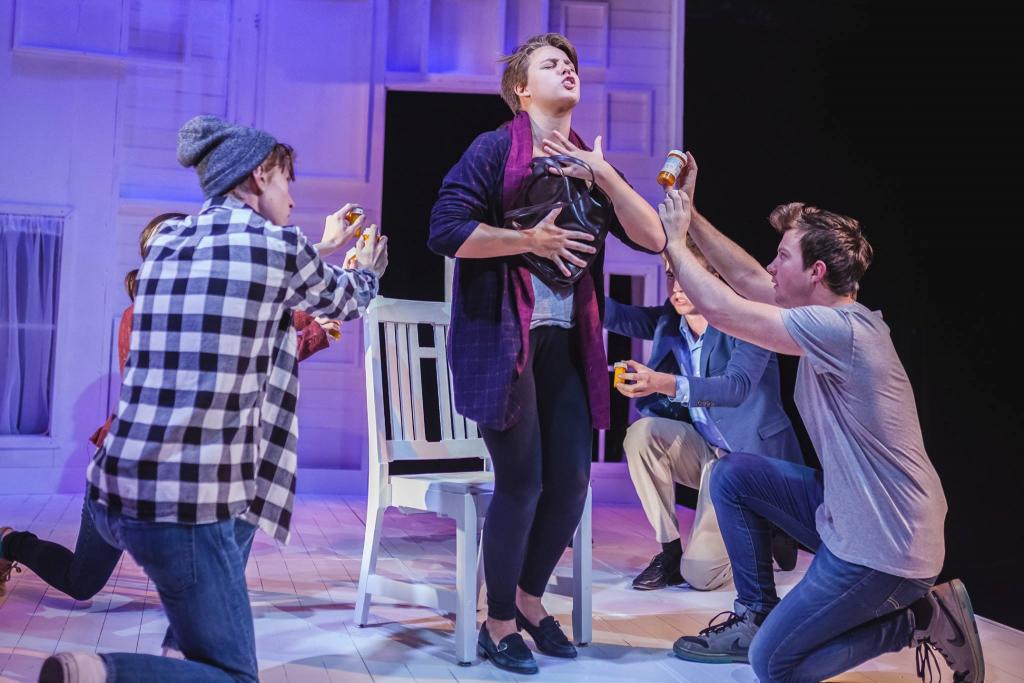 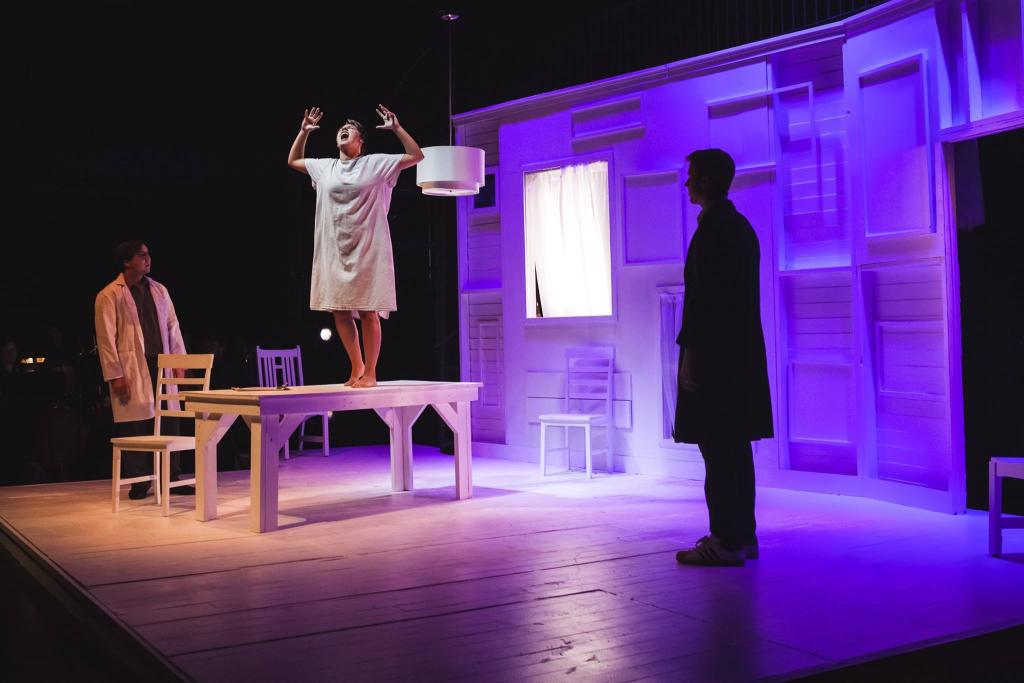 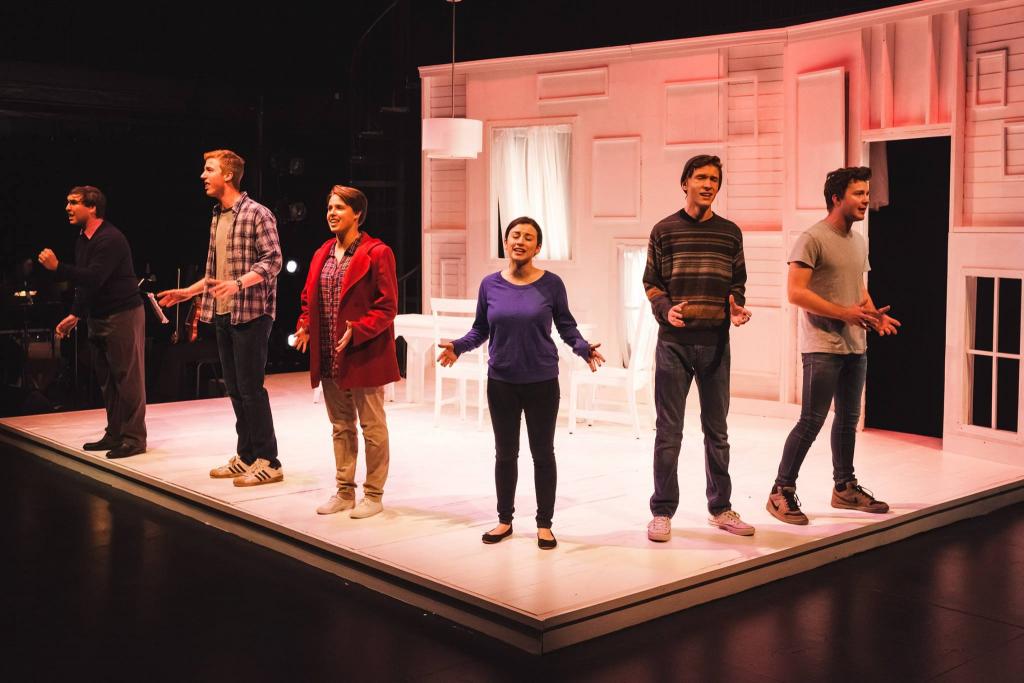 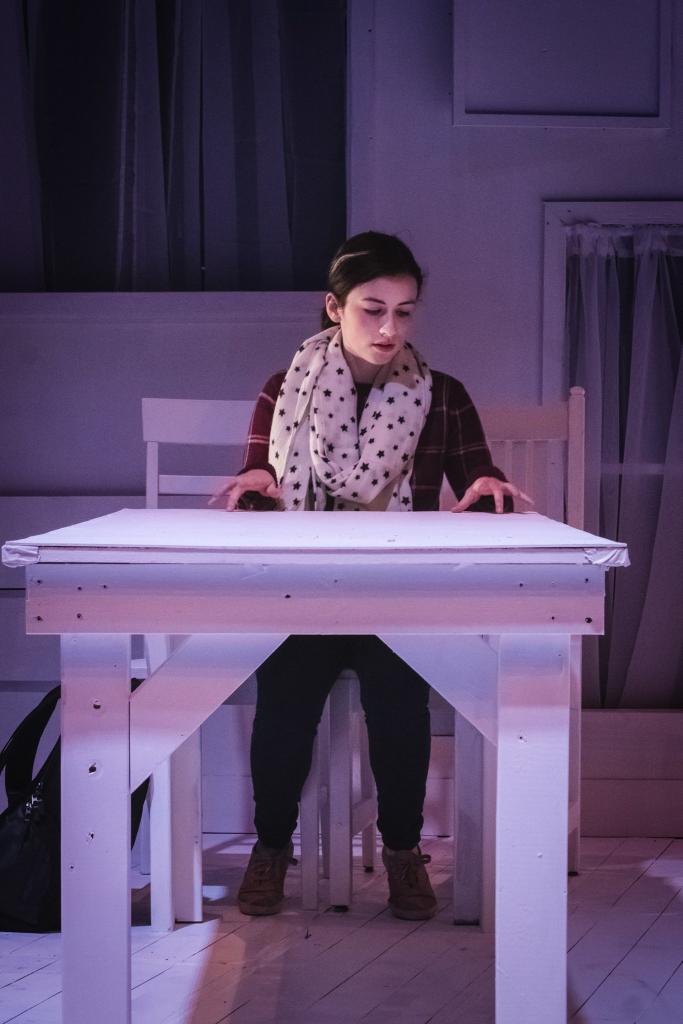 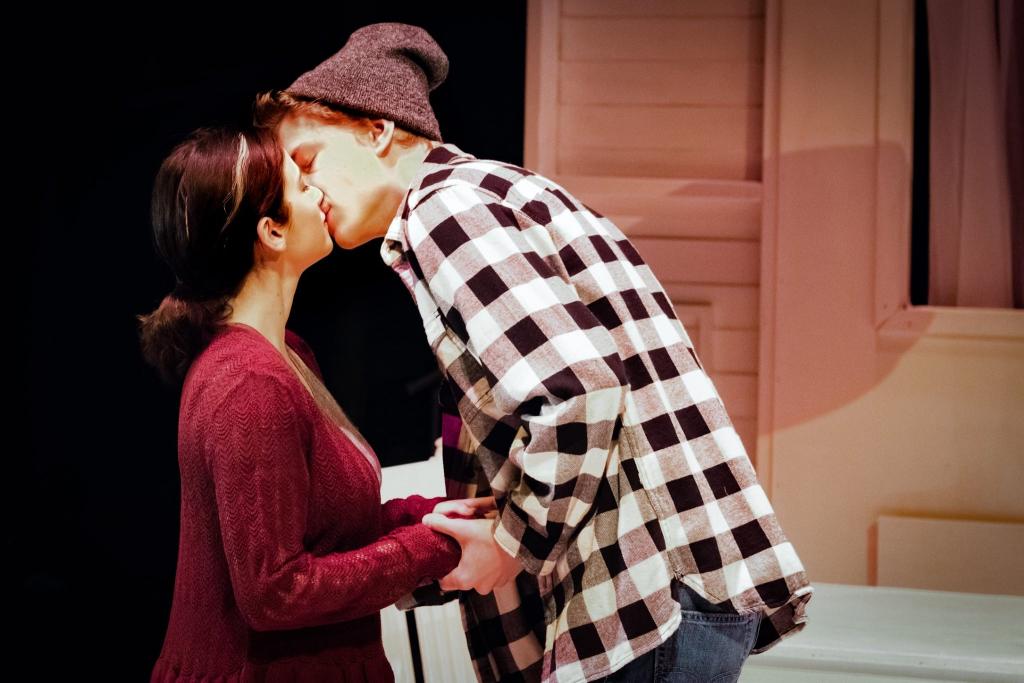 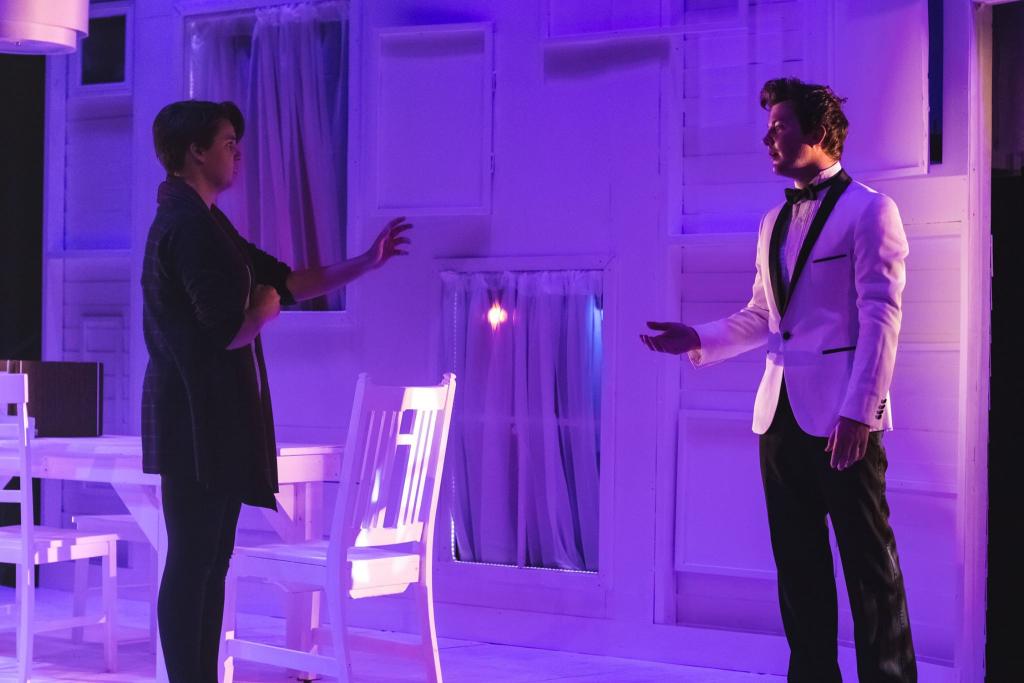 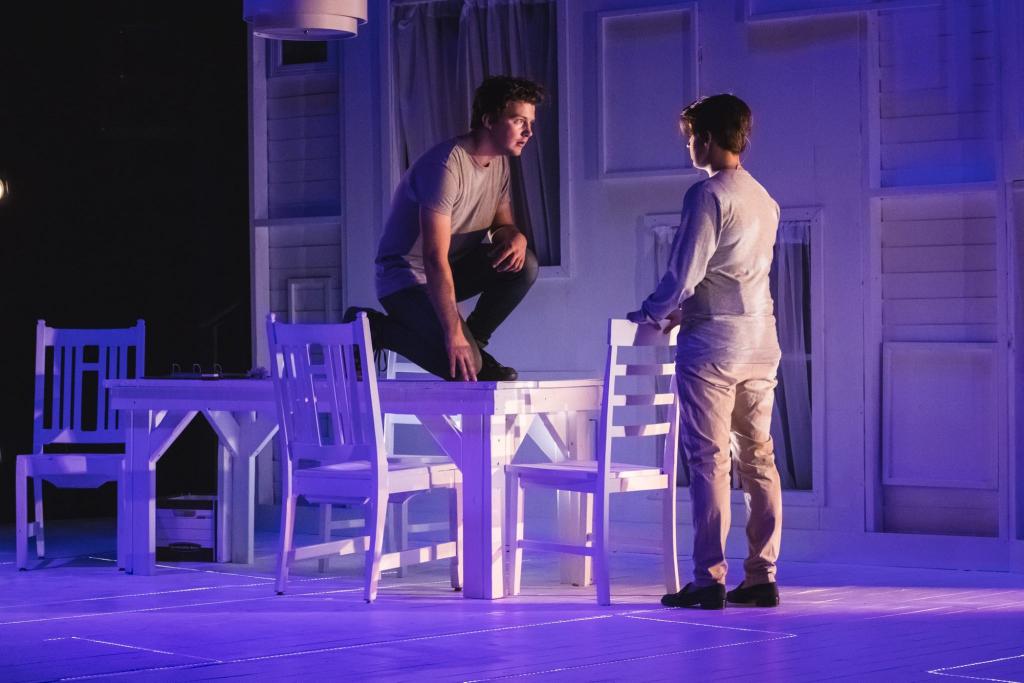 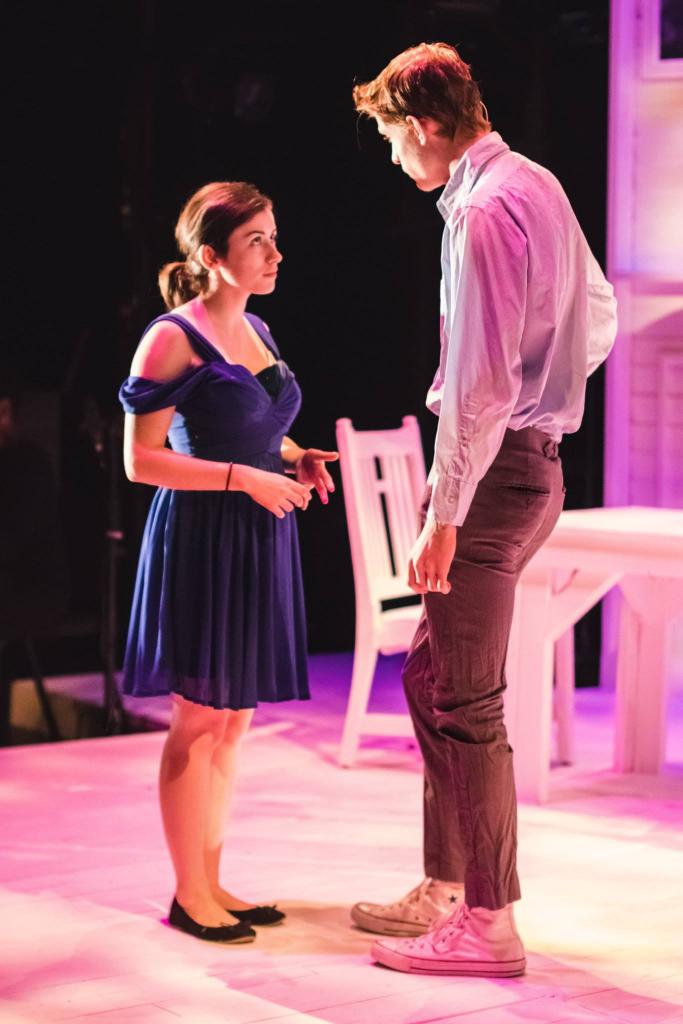 How do we respond to crisis? Does that change depending on who’s watching? Winner of three 2009 Tony Awards and the 2010 Pulitzer Prize, Next to Normal investigates the effects of mental illness and trauma on a family that’s desperately trying to keep it together. Accompanied by an energy-filled score, this pop-rock musical by Tom Kitt and Brian Yorkey questions the ethics of modern psychiatry and what it means to be “normal.”

Kate Connors (Diana) is a second-year Environmental and Urban Studies major and Human Rights minor. Previous credits include: Pippin (Leading Player), Things My Mother Taught Me (Olivia), and Rehearsal for Murder (Monica). In addition to acting, Kate spends her time singing with Voices in Your Head.

Luke McKeever (Dan) is a first-year potential Computer Science major. He has previously acted in Rock of Ages (Lonny), Avenue Q (Princeton), and West Side Story (Snowboy). This is his first show with University Theater and he is excited to continue participating in it throughout his college career.

Madeline Callaghan (Natalie) is a fourth-year political science major. This is her first UT production, but in high school she worked on Sweeney Todd (Mrs. Lovett) and Thoroughly Modern Millie (Millie). When she isn't immersing herself in showtunes, Madeline is also a member of the university's moot court team and acts as a committee chair at the Institute of Politics.

Connor Tree (Henry) is a first-year Linguistics major. He has previously worked on Oklahoma (Jud Fry) and other high school productions. He would like to thank you for coming, and he hopes you enjoy the show.

Brandon Powell (Gabe) is a first-year, undecided, in the college. This is his first production with University Theater. In high school, Brandon performed in And Then There Were None (Philip Lombard) and Cinderella (Prince Charming). He hopes to continue acting throughout college.

Jonathan Rockhill (Dr. Fine/Dr. Madden) is pleased to be making his UT debut. He is a second year Physics major who has been an actor since his elementary school production of You're a Good Man, Charlie Brown in the fourth grade and is thrilled to be working with such a talented cast and crew.

Jacob Goodman (Director) is a third-year Visual Arts and Comparative Human Development major. Previous UT credits include Twelfth Night (Duke Orsino), The Seagull (Konstantin), Comedy of Errors (Director), Mr. Burns, a post-electric play (Matt/Mr. Burns), and She Kills Monsters (Puppet Designer). He is a current member of UT Committee and the Dean's Men Board, where he serves as Social Chair and Arts Chair respectively.

Brandon McCallister (Stage Manager) is a fourth-year Comparative Human Development and TAPS major in the college. He has previously worked on She Kills Monsters (Director), Comedy of Errors (Stage Manager), Twelfth Night (Stage Manager), Richard II (ASM), Henry V (ASM), Love's Labour's Lost (AD), and Romeo and Juliet (Props/Scenic Designer). He has worked with The House Theatre of Chicago on their productions of Diamond Dogs (ASM) and A Comedical Tragedy for Mister Punch (SM Intern). Brandon is also a member of University Theatre's committee.

Hana Rajap (Dramaturg) is a student in the college.

Corinne DiFrancesco (Vocal Director) is a third-year physics major. Next to Normal is her first UT production. She is also the music director of the Ransom Notes, a co-ed a cappella group on campus.

Paris Bezanis (Scenic Designer) is a second-year History and Russian Eastern European Studies major. At UChicago, he has previously worked on Iphigenia and Other Daughters (Assistant Scenic Designer) in the fall of 2016. His favorite snacks are gummy worms (sour) and Cheez-its.

Afriti Bankwalla (Costume Designer) is a student in the college.

Eren Ahn (Props Designer) is a third-year Biological Sciences and Visual Arts major, also unofficially majoring in UT and frantic flailing. Having previously worked on After the Revolution (Costumes Assistant) and Mr. Burns, a post-electric play (Assistant Props Designer), Eren is looking forward to sleeping once this production is over, though physics might decide that that's not happening.

Avi Sheehan (Lighting Designer) is a fourth-year TAPS major and NELC minor. They have previously been the lighting designer on productions of She Kills Monsters (Spring 2017), Iphigenia and Other Daughters (Fall 2016), Romeo and Juliet (Spring 2016), The Seagull (Winter 2016), Miss Julie (Fall 2015), and Amadeus (Winter 2015). They have also assisted lights, scenic, and stage management and been the Master Electrician on a number of productions.

Val Bodurtha (Choreographer) is a fourth-year Classics major and Statistics minor. She's the production manager of Off-Off Campus and an Associate Producer at the Second City. She likes stand-up and has opened for Jerrod Carmichael, and her first novel was published July 2017.

Ella Hester (Music Director/Bassist) is a third-year History and Creative Writing Major. This is her first UT production and she is very excited to be here! Ella is an associate of Phoenix house and she is a soprano in Motet Choir.

Audrey Teo (Pianist) is a second-year prospective Public Policy major. She is very excited to be involved in her first UT production.

Daniel Schwartz (Guitarist) is a fourth-year Philosophy and Politcal Science major. This is his first performance in a University of Chicago theater production, and he cannot read music. He is also involved in Model United Nations and is the captain of the cheerleading team.

Michaela Voit (Cellist) is a research project assistant at Chapin Hall at the University of Chicago.

Chinye Ijeli (Violinist) is a fourth-year Biological Sciences major. She has previously played the violin in the pit orchestra for Iolanthe. This is her first time working with University Theater.

Eli Zerkle (Drummer) is a student in the college.

Katie DeLong (Assistant Director) is a first year Biology major. This is her first UT show, and she looks forward to many more! She has previously worked on Cry-Baby (Stage Manager), Emil and the Detectives (Stage Manager and Set Designer), and The Sea Cook (Stage Manager and local boat expert).

Doga Sarier (Assistant Production Manager) is a first-year Economics and Political Science major. This is her first UT show.

Clarissa Mullig (Assistant Stage Manager) is a first-year in the college and a potential TAPS major. Previously this quarter, she has acted in Theater [24].

Arielle Weinstein (Assistant Stage Manager) is a first-year student prospectively majoring in Biological Sciences. She is excited to be working on her first UT show and wishes the cast and crew of Next to Normal the best of luck!

Ethan Schondorf (Assistant Scenic Designer) is a first-year in the college. This is his first UT show.

Fred Dan (Assistant Lighting Designer) is a first-year who is undecided on his future endeavors. This is his first show that he has worked on at the University of Chicago.

Hannah Dorsey (Assistant Props Manager) is a second-year history major. This is their first UT show and they’re really excited to be here!

musa sabr hex bouderdaben (Tech Staff Liason) is a student in the college.

Theodore Bourget (Tech Staff Liason) is a student in the college.

Charlie Lovejoy (Committee Liaison) is a fourth-year English literature major. Charlie is primarily a stage manager: recent credits include Mr Burns, a post-electric play, West Side Story, By the Bog of Cats, Miss Julie (UT); Not I, All choiceless She (TAPS); Two Mile Hollow, American Hero (First Floor Theater); La Ronde (ATC); You On the Moors Now (The Hypocrites); and several workshops with The House Theatre. Charlie has also production managed and props designed for UT, among various other roles, and is a Dean’s Men Board member and Theater[24] Curator.