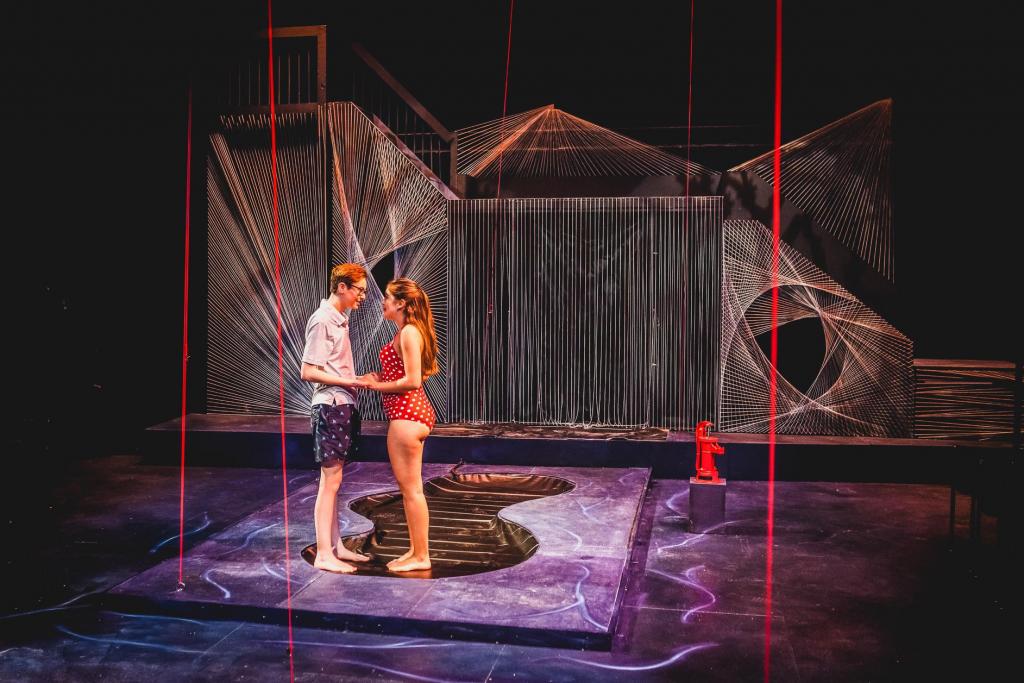 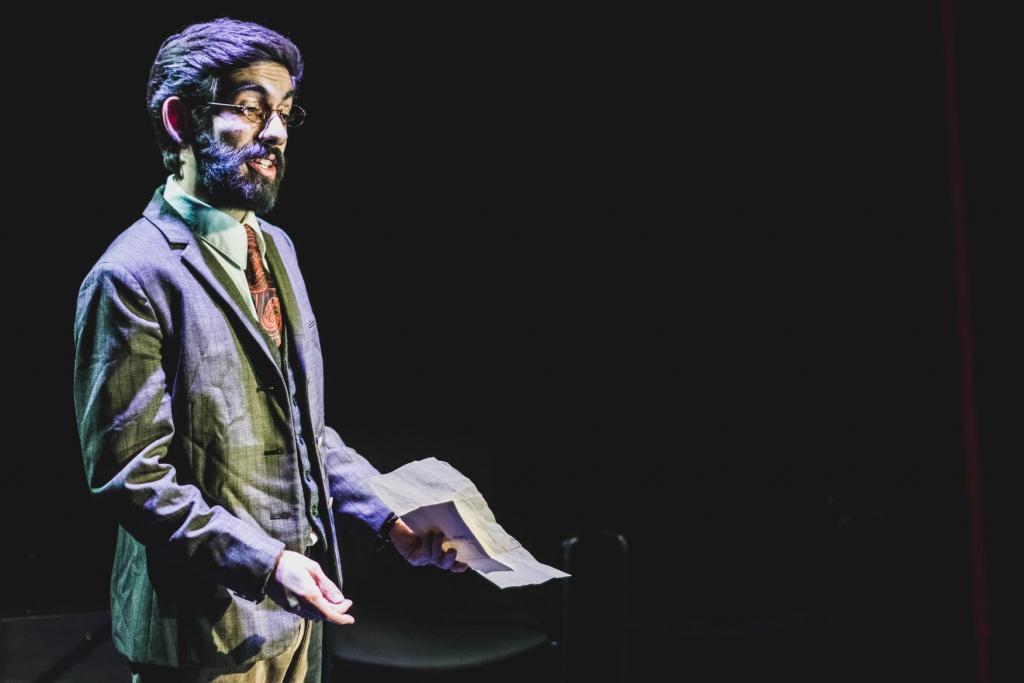 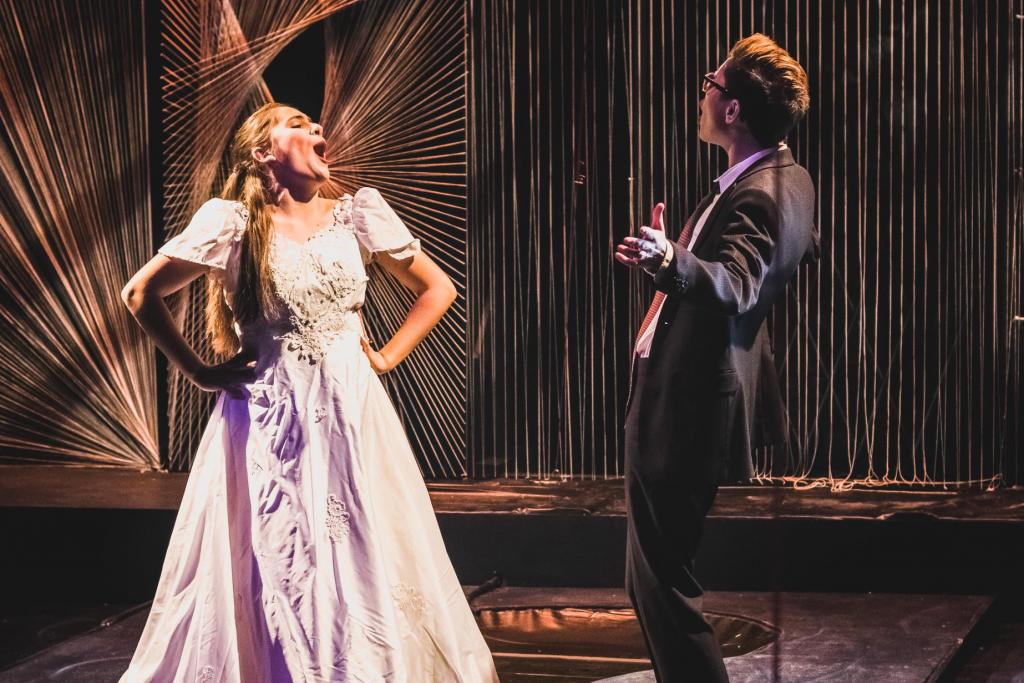 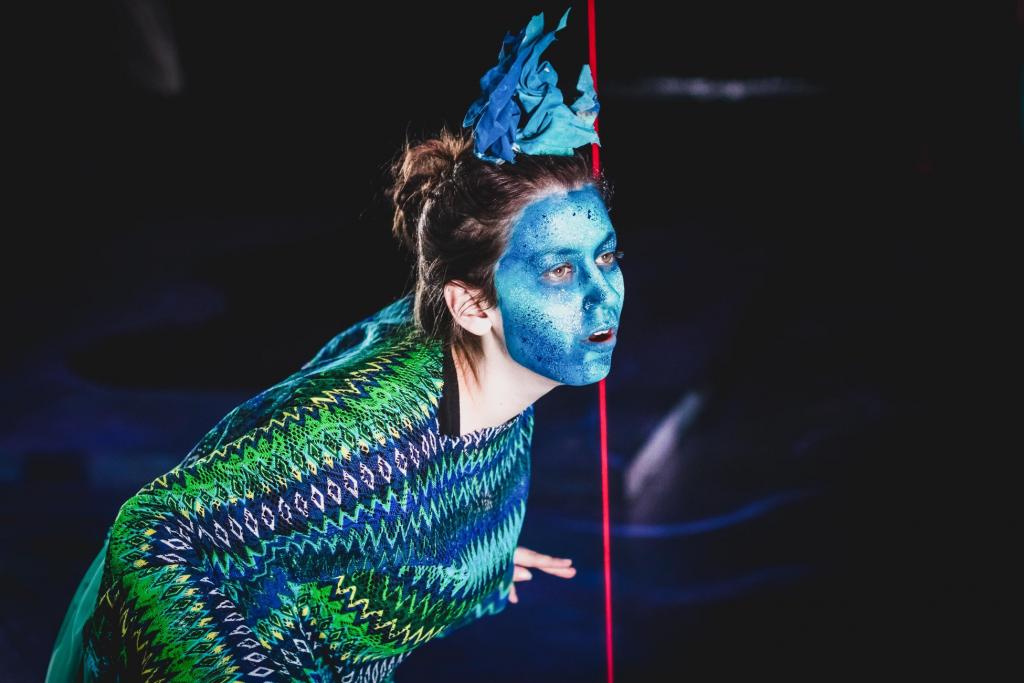 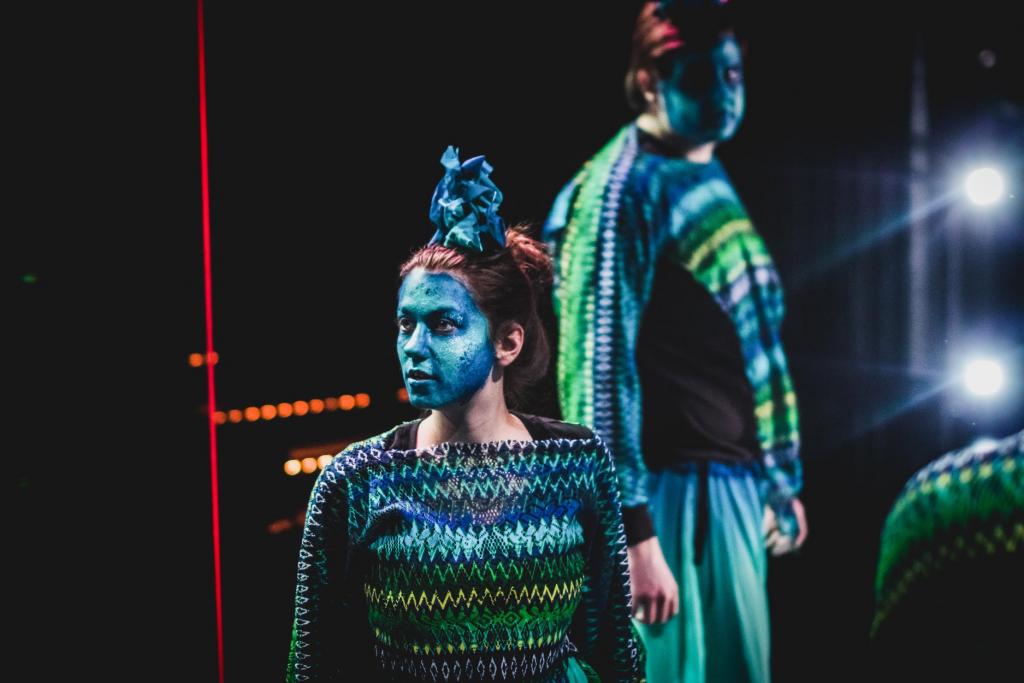 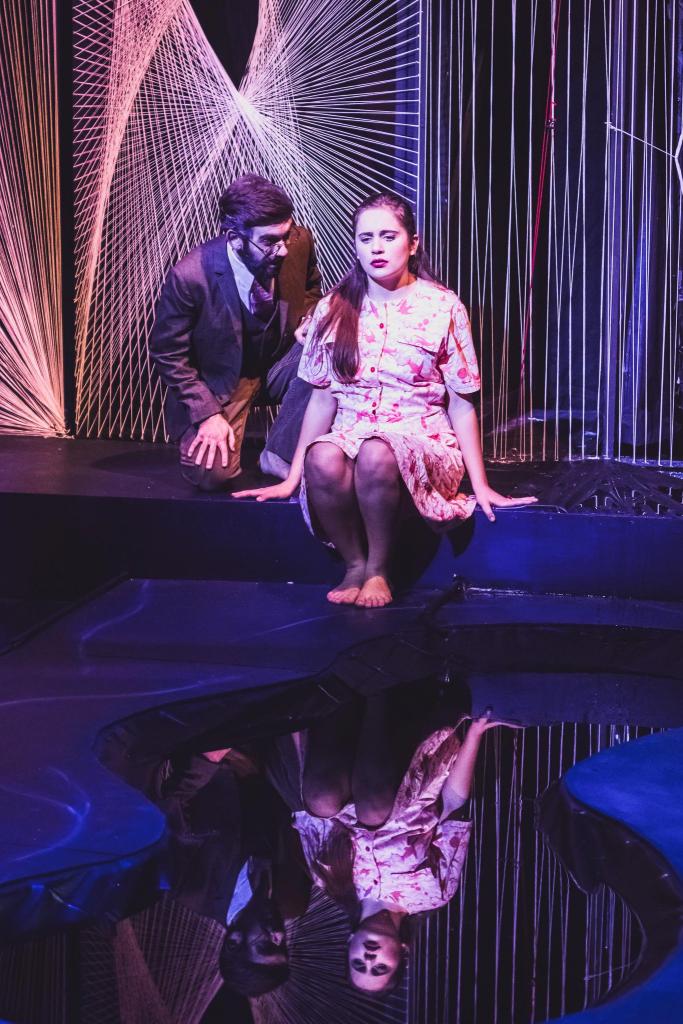 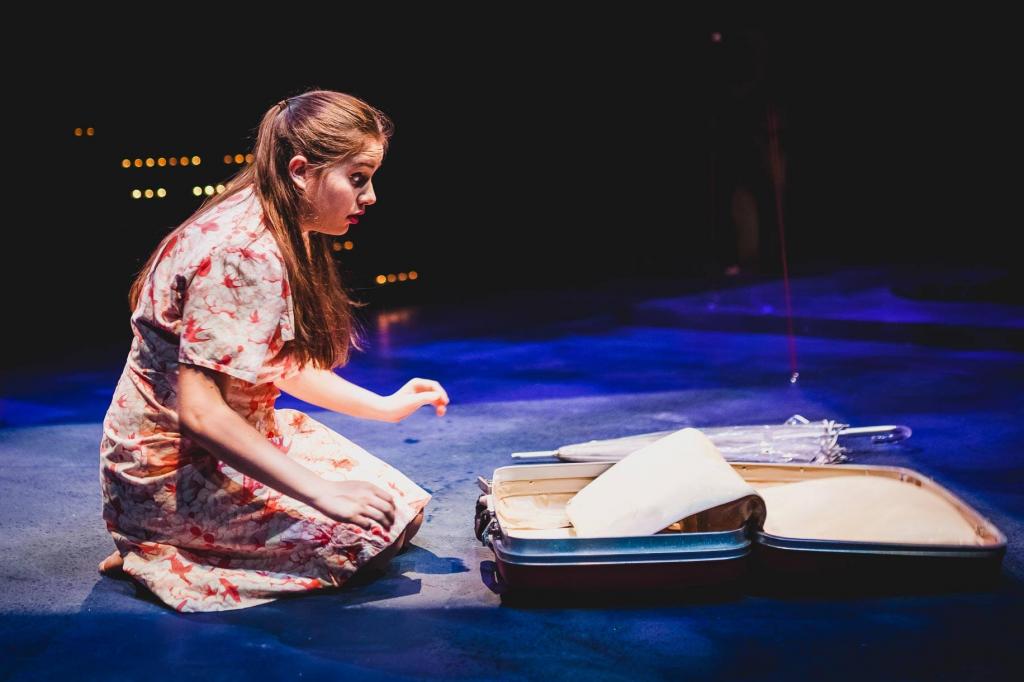 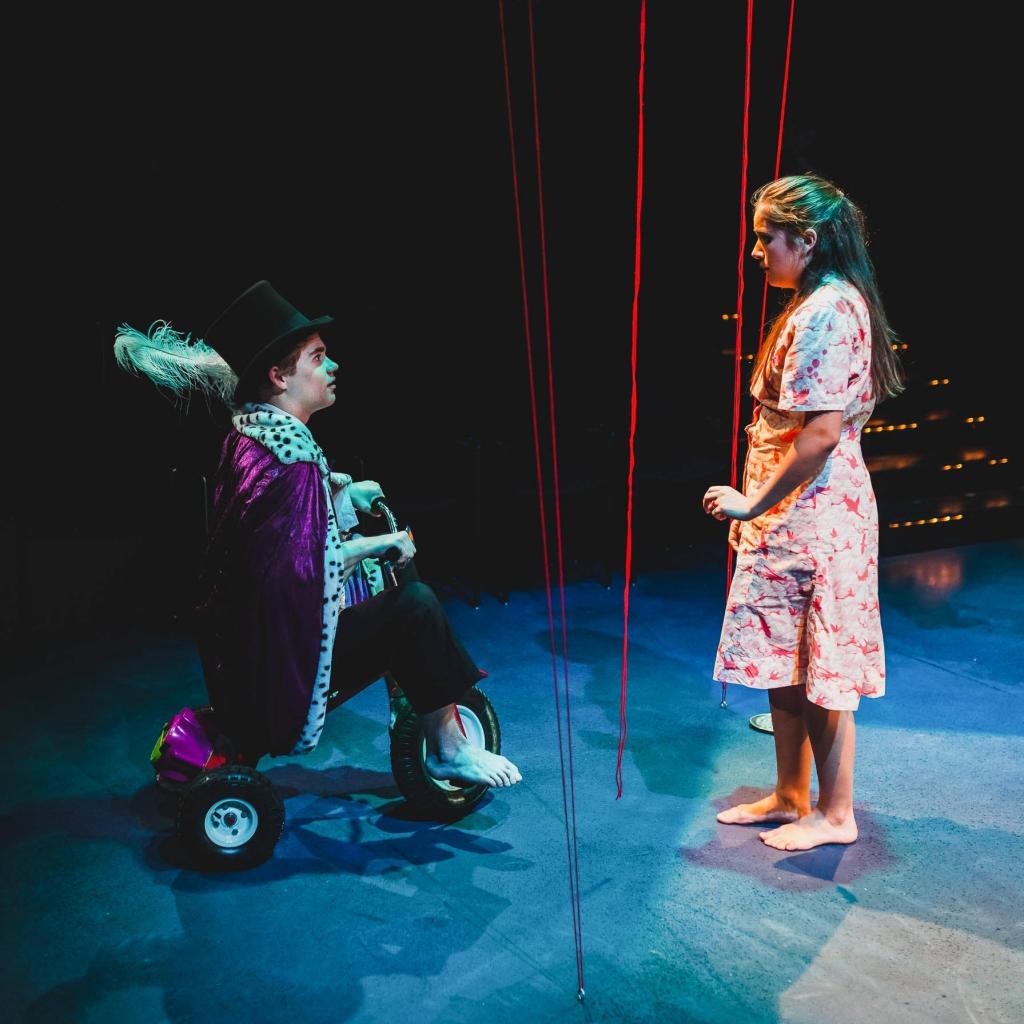 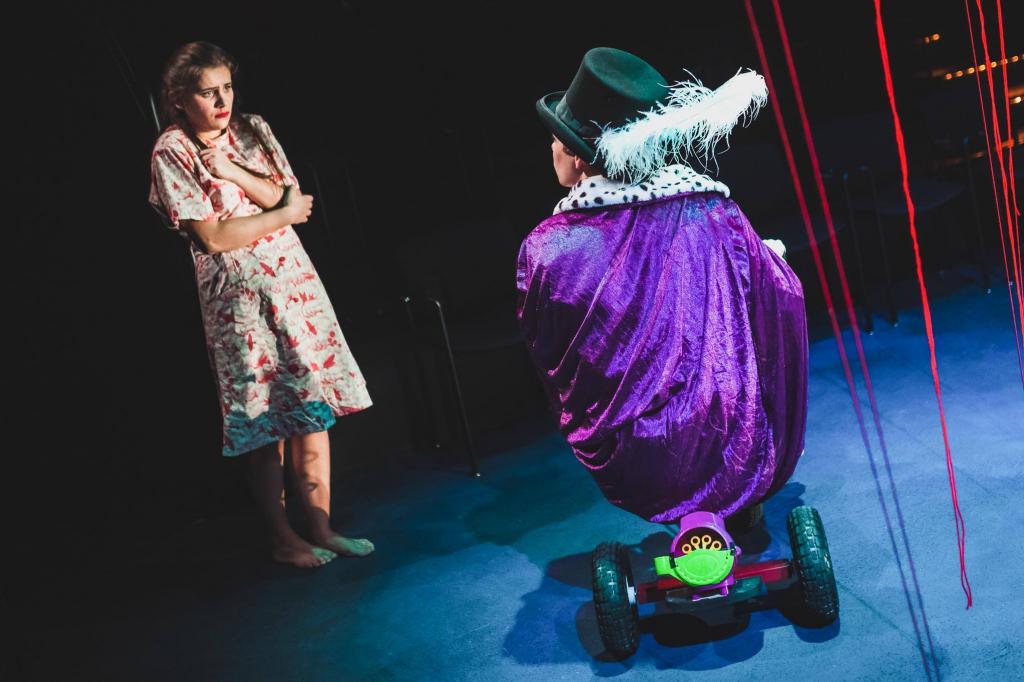 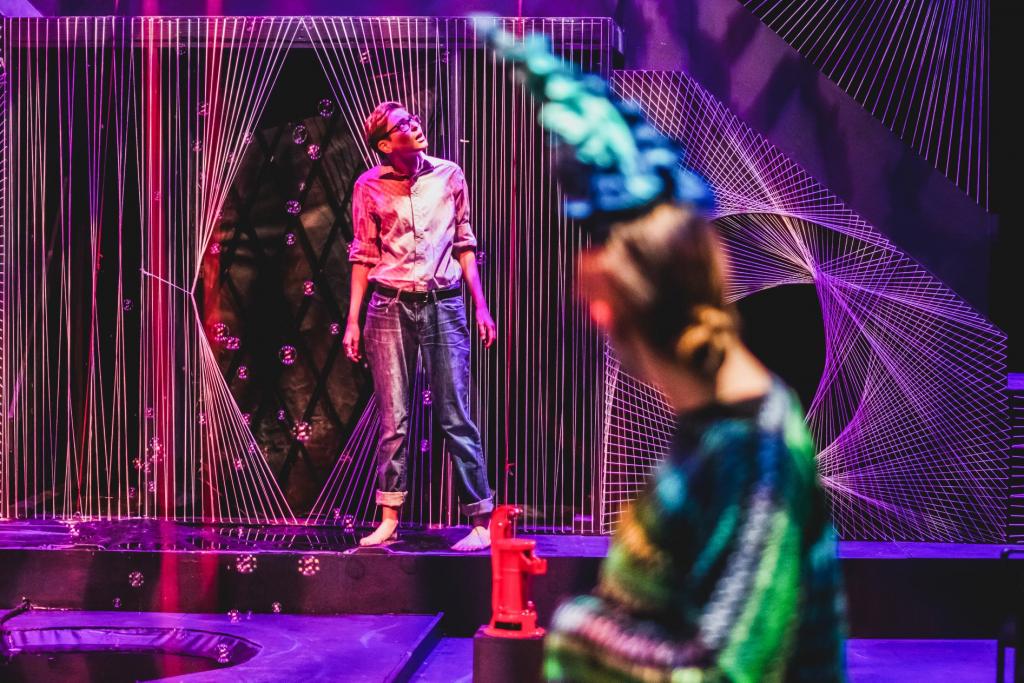 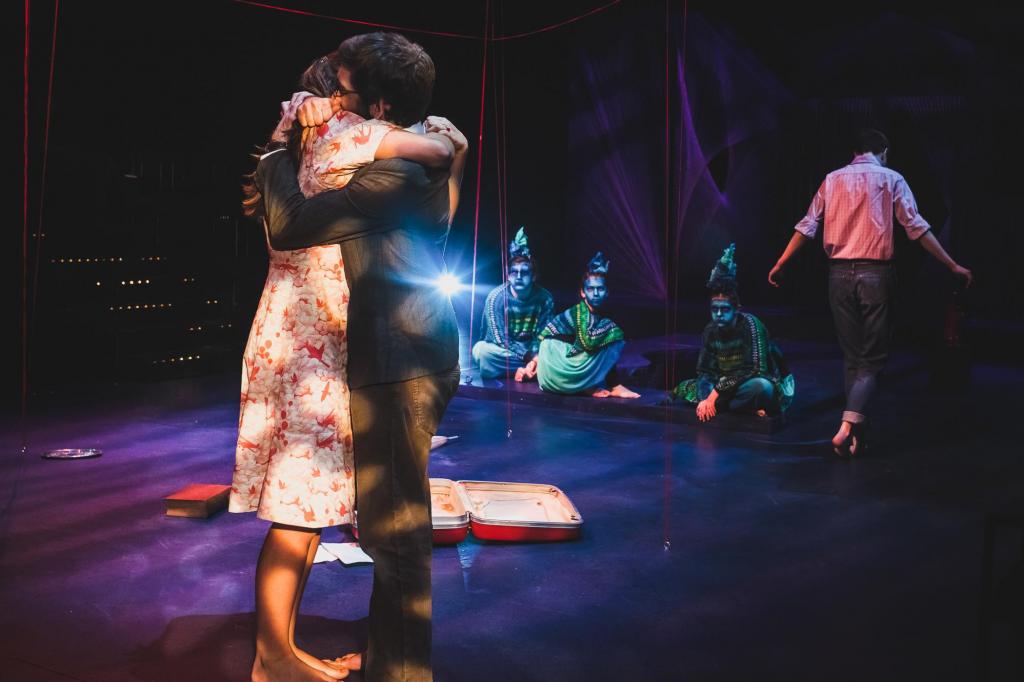 Encounter this reimagined classic Greek myth of Orpheus and Eurydice that focuses on the challenges of the Underworld. The dreamlike story blurs the boundaries between the world of the living and dead as letters, songs, and memories weave together in a striking meditation about how we grieve.

Faith Shepherd (Eurydice) is a second year Psych/CHDV major. Some previous credits include Much Ado About Nothing (Music Director) and Lear (Gloucester). Here's a small list of current hopes and dreams 1. Become an RA 2. Become the BEST RA 3. Get better at cooking healthy foods 4. Read books for fun 5. Knit. A huge thank you to the entire production team and cast of Eurydice for helping create this magical show, and my parents who never cease to inspire me.

Katie Bevil (Orpheus) is a second year TAPS and French double-major. UT credits include Iphigenia and Other Daughters (Chrysothemis), She Kills Monsters (assistant set designer), and As You Like It (Orlando). Katie will also serve on UT Committee starting Spring 2018.

Leonardo Ferreira Guilhoto (Father) is a second year Physics and Computational and Applied Math (CAM) major. Leo is a proud member of the UChicago Commedia Dell'Arte ensamble and has previously worked on Peter And The Starcatcher (Black Stache) and The Misanthrope (Clitandre/Du Bois). He has also been involved with the Classical Entertainment Society.

Riley Spieler (The Nasty Interesting Man/Lord of the Underworld) is a first year undecided major. He previously appeared in the Dean's Men production of As You Like It (Touchstone) and currently performs with UChicago's own Commedia dell'Arte.

Ruthie Dworin (Little Stone) is a first year who is planning on majoring in Linguistics and TAPS. She has previously worked on Julius Caesar with the Classical Entertainment Society (Assistant Director).

Miranda Grisa (Loud Stone) is a first year Computer Science major from Milwaukee, Wisconsin, and she is very excited for the opportunity to write in third person. In high school, she worked on The Tempest, Fiddler on the Roof, Beauty and the Beast, Alice in Wonderland, and Arabian Nights, although her performance as the Loud Stone in Eurydice marks her UChicago debut.

Megan Philippi (Director) is a fourth year TAPS major. At UChicago, she has worked on The Trump Card (Director), After The Revolution (Director), A Winter's Tale (Assistant Director), Ex Libris (Director), By the Bog of Cats (Monica), Urinetown (Assistant Director), Endgame (Assistant Set Designer), New Work Week (Director), and Theater[24] (Writer). Her short play An Invitation was performed at Victory Gardens's College Night: Trigger Finger. She spent the summer working as a literary intern at the Goodman Theatre and is currently the dramaturgy intern at Court Theatre. Many thanks to the Eurydice team for bringing so much energy, kindness, and brilliance to this process and story.

Sarah Stark (Production Manager) is a fourth year TAPS and English major. She has mostly stage managed in UT, TAPS, and the Dean's Men and has done professional work around Chicago in her time at UChicago. Most recently, she spent the summer at the Glimmerglass Festival in Cooperstown, NY where she will be returning this summer as an Assistant Stage Manager. This is her second-to-last show with UT. Her last will be as Stage Manager for Love's Labour's Lost tenth weekend of this quarter. Much love and thanks to Carissa Knickerbocker and the excellent design staff on this show for being such an excellent first group to PM. Also to Laura Ashlock, Avi Sheehan, Jenni Guarino, and Maggie Strahan for keeping her sane for this process.

M.C. Steffen (Dramaturg) is a fourth year Theater and Performance Studies major. His previous UChicago credits include After The Revolution (Dramaturg), Belleville (Director), Urinetown (Dramaturg), An Apology for the Course and Outcome of Certain Events Delivered by Doctor John Faustus on This His Final Evening (Director), and Sleuth (Director). He has directed for the Rhinoceros Theater Festival and Victory Gardens Theater's "College Night" series, and is also an autobiographical solo performer who performed his first full-length show 100 Questions as part of UT's New Work Week 2017.

Charlotte Rieder (Props Master) is a fourth year Math major. They have previously worked on Geography of a Horse Dreamer, After The Revolution, Noises Off, The Seagull, Love's Labour's Lost, and Henry V.

Sydney Purdue (Scenic Designer) is a fourth year Statistics major and Visual Arts minor. This is her sixth UT show as a scenic designer, having most recently worked on She Kills Monsters and Mr Burns, a post-electric play. She is also a member of Tech Staff where she works in the scene shop.

Eric Karsten (Lighting Designer) is a second-year majoring in Math and Economics. He is involved with University Theater, Oeconomica, and the technical staff of the Logan Performance Hall. His past credits include: LEAR, Mr Burns, a post-electric play, Beauty and the Beast, The 39 Steps, Legally Blonde, and Richard III as Lighting Designer, Next to Normal as Master Electrician, and After the Revolution as Assistant Lighting Designer.

Stephanie Slaven-Ruffing (Sound Designer) is a fourth year in the College double majoring in Anthropology and Comparative Human Development. Her previous sound design work includes UT productions of Romeo and Juliet, Comedy of Errors, Circe, and Peter And The Starcatcher. She also works as the Assistant to the Audio Engineer on the TAPS Technical Student Staff.

Lynneah McCarrell (Assistant Director) is a second year Political Science major. This is her first UT production and she is very excited.

Molly Bridges (Assistant Stage Manager) is a student in the college.

Helen Malley (Assistant Lighting Designer) is a student in the college.

Kenna Camper (Assistant Costume Designer) is a first year Visual Arts major. She has previously worked on Next to Normal (Assistant Scenic Designer).

Lillian Hermes (Assistant Costume Designer) is a first year biology major and music minor. This is her first show with University Theater, but she looks forward to lurking in the costume shop for many more.

Nina Lubeck (Assistant Costume Designer) is a student in the college.

Nicola Lustig (Assistant Sound Designer) is excited to be working on her second UT show. In the fall she worked on Peter And The Starcatcher (Assistant Production Manager) and she can't wait for more UT shows in the future!

Seph Mozes (Tech Staff Liaison) is a student in the college.

Ted Bourget (Tech Staff Liaison) is a student in the college.