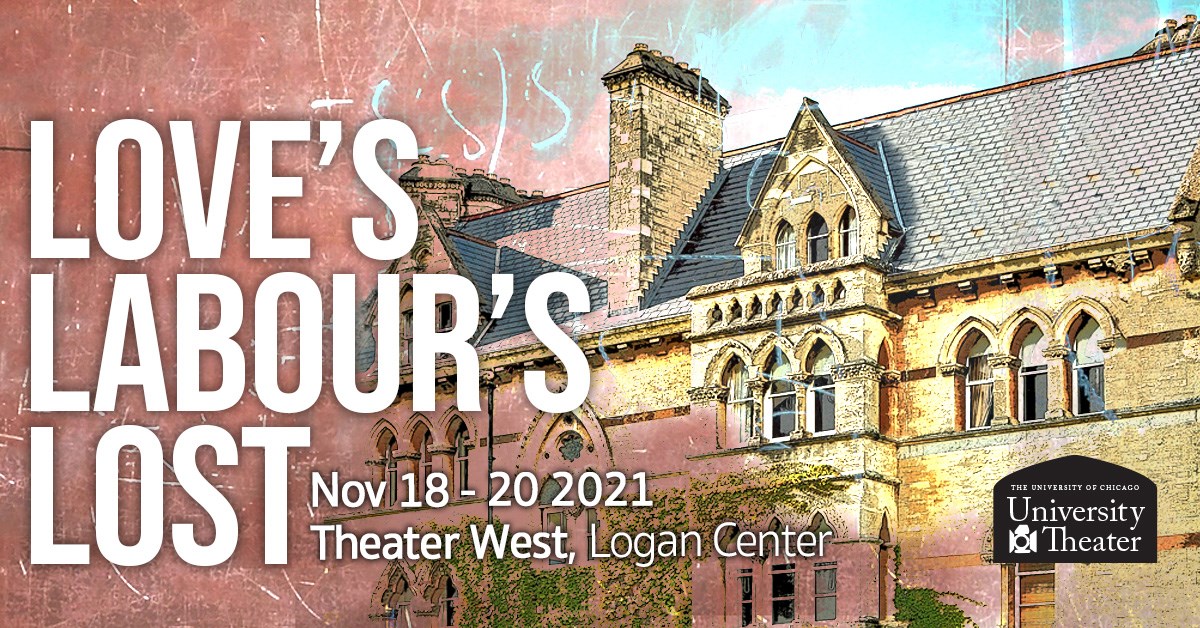 King Ferdinand of Navarre’s “no fun” edict mandates scholarly endeavors, quiet contemplation and complete commitment to chastity for three entire years. His closest courtiers reluctantly sign on. But in true comedic fashion the arrival of the French Princess and her beautiful entourage quickly causes the would-be scholars to realize that the whole endeavor was a bad idea, with each votary trying to find a way to skirt the laws they themselves wrote. The young men’s studies soon give way to secret letters and amorous vows as the women set out to teach the men a thing or two about love and commitment. The puns fly and the playwright’s wordplay take flight in this playful romantic comedy about young love with a surprising conclusion where the characters' new outlooks on life are tested.

Tyler Ashman (Longaville) is a first-year graduate student pursuing a dual degree in the Law School and Divinity School. Before coming to UChicago, he worked extensively with Princeton’s Lewis Center for the Arts and the Playwright’s Guild as a writer, performer, and stage manager. He also founded and served as head writer of Troupe, a campus sketch comedy group. During a semester in the United Kingdom, he performed with the Cambridge Footlights in their annual pantomime, and he wrote for several of their sketch shows. He is beyond excited to be making his Dean’s Men debut!

Nora Schultz (Dumaine/Forester) is a second-year English major. They have previously participated in the past three Theater[24]s (Curator/Actor) and the Much Ado About Monologues series (Queen Margaret). She also currently serves as the Arts Chair of the Dean’s Men and is thrilled to be back on a real stage in front of real people!

Lara Sachdeva (Boyet/Dull) is a fourth-year in the College double majoring in Political Science and Theatre and Performance Studies. She has previously performed in Fun Home (Medium Alison) and worked on Philoctetes (Assistant Costume Designer). She sends so much love to the cast and crew and hopes that you enjoy the show!

Harry Franklin (Don Adriano de Armado) is thrilled to be making his in-person Dean’s Men debut after performing in the Much Ado About Monologues series and the 24-Hour Plays last year! He’s a second-year majoring in undecided. When not performing, he enjoys jogging, juggling, and joggling (a combination of the previous two).

Caroline Kaminsky (Sir Nathaniel) is a new doctoral student in Biochemistry and Molecular Biophysics. Her previous early modern roles include Much Ado About Nothing (Beatrice), Twelfth Night (Maria), Romeo and Juliet (Servant), and The Second Maiden’s Tragedy (The Lady). She would like to thank the wonderful friends she made in the cast/crew and especially Cole for his thoughtful directing. Pauca verba!

Zander Galluppi (Holofernes/Mercade) is a fifth-year Ph.D. candidate in the Committee on Immunology. He has performed in over ten UT/TAPS productions: some of his favorite credits include Grenadine (Sconce), Animals Out of Paper (Andy), and Peter and the Starcatcher (Smee). This is his second time performing Love’s Labour’s Lost with UChicago, as he appeared as Longaville in Love’s Labour’s Lost: A New Musical his first year. Zander has also appeared in Chicago regional productions with the Beverly Arts Center (Antipholus of Ephesus, The Comedy of Errors), This Moment Productions (Professor Plum, Clue: Stay-at-Home), and Underscore Theatre Company (Moby Dick–A Musical, Capts. Bildad & Gardiner) as part of the Chicago Musical Theatre Festival. This year is also Zander’s third year on UT Committee. You can catch him next appearing as The Man in next quarter’s TAPS production of Amazons and Their Men!

Jared Zuker (Costard) is a fourth-year Fundamentals and TAPS major. He has previously worked on Macbeth (Ross) and Twelfth Night (Sebastian). He is the current Social Chair of the Dean’s Men.

Murphy DePompei (Princess) is a fourth-year Public Policy and Spanish major. She has previously acted in Dean’s Men productions of The Winter’s Tale (Mamillius/Perdita) and Antony & Cleopatra (Cleopatra). She is beyond excited for this quarter’s production of Love’s Labour’s Lost and is looking forward to the last leg of her college theater career.

Laura Mahaniah (Rosaline) is a second-year Linguistics and TAPS major. At UChicago, she has performed in Original Sin (Andrea) and My H8 Letter to the Gr8 American Theatre (ensemble), as well as a variety of staged readings. Her time outside of rehearsal is usually spent in one of the University’s dance studios.

Sophie Knifton (Jaquenetta/Maria) is a second year in the College studying Psychology and Creative Writing. This is her University Theater debut. She sends her love to the cast and crew for making her first Dean’s Men experience so magical.

Don Harmon (Dramaturg) is a Fourth Year Classics and Comparative Literature Major. He has previously acted in UT’s Julius Caesar and the Dean’s Men’s Measure For Measure. He directed the Weekend of Workshop’s production ‘Amlet in historical Elizabethan pronunciation. This is his first time as a UT dramaturge. Outside of theater, Don cooks, plays guitar, and is co-Editor-in-Chief for the Animus Undergraduate Classics Journal.

Nico Giunta (Production Manager) is a third-year Computer Science and MADD Major. He’s previously worked on Waiting for Godot (Assistant Sound Designer) and Welcome Back to My Channel (Assistant Production Manager). He spends way too much time staring at screens, whether he’s staring at budget spreadsheets, running tournaments for UChicago Smash, or playing one of many, many, rogue-likes or visual novels in his backlog of video games. He is not a werewolf.

Spencer Ng (Stage Manager) is a third-year studying Computer Science and Theater & Performance Studies. His past credits include My H8 Letter to the Gr8 American Theatre (Stage Manager), Waiting for Godot (ASM), and The Winter’s Tale (ASM). He’s super excited to bring theater to in-person audiences again, and he Loves Labour Laws and ensures that they’re followed for the lovely members of this production.

Thomas Nielsen (Scenic Designer) is a third-year creative writing and computer science major in the college. She previously assisted on scenic design for Rosencrantz and Guildenstern Are Dead and The Old Man and the Old Moon, and is excited to have the chance to lead design for this show. She’s very thankful to everyone who helped her out along the way: assistants, teachers, and others.

Becky Vasquez (Props Designer) is a third-year Biology major. They have previously worked on Rosencrantz and Guildenstern are Dead (Assistant Props Designer). They enjoy knitting and papercrafts, and love being able to incorporate these hobbies into shows in as many aspects as possible. They hope that you enjoy this show, as it has truly been a labor of love.

Colin Cooper (Sound Designer) is a third-year Chemistry Major. He worked as a Sound Designer for Antony and Cleopatra and is the Treasurer of the Dean’s Men Board. In his free time, he enjoys running.

Yue Pan (Assistant Dramaturg) is a third-year Astrophysics major and creative writing minor. She has previously worked as the director for Theatre 24.

Coco Liu (Assistant Stage Manager) is a first-year tentative Chemistry and Linguistics double major. This is her first show with UT, and hopefully by her next one she’ll finally have come up with a fun fact about herself.

Kelly Mao (Assistant Stage Manager) is a first-year computer science major who has worked on various shows as a sound designer in the past but has always secretly longed to be a stage manager because she is in fact a control freak at heart, and is thrilled to be living her dream.

Maya Doyle (Assistant Scenic Designer) is a first-year. This is her first TAPS show.

Emily Zen (Assistant Props Designer) is a first-year in the College. Love’s Labour’s Lost is her first show.