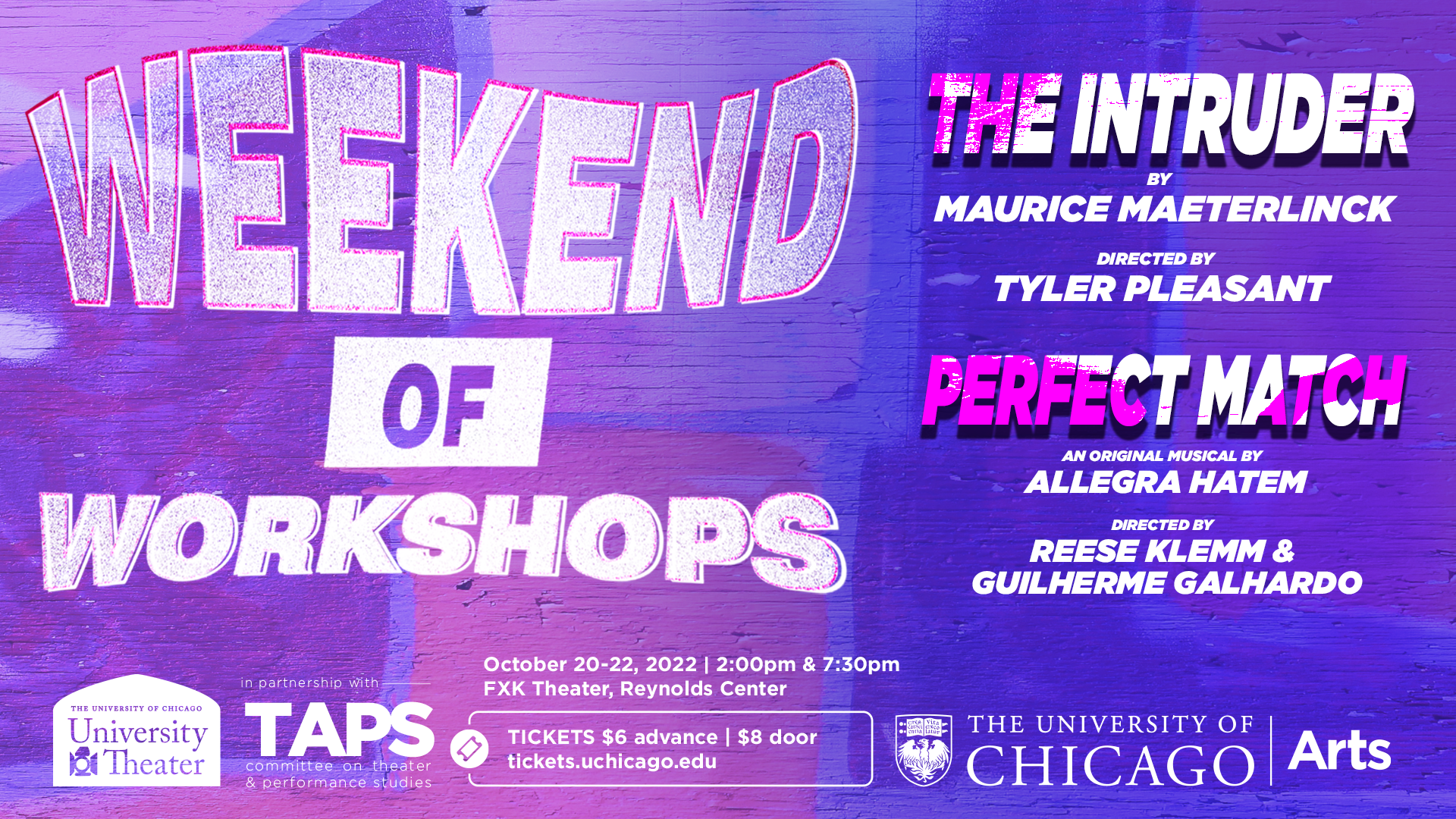 Weekend of Workshops offers a stage to directors, devisers and performers hoping to exercise and explore their craft. This fall, audiences will encounter new work and old, original and revised. A Weekend of Workshops commits each and every inhabitant of this intimate space to the expansion of the limits of their artistry. Join us for The Intruder and Perfect Match!

The Intruder by Maurice Maeterlinck, directed by Tyler Pleasant

A one-act play by Belgian playwright and Literature Nobel Laureate. A family stays up together at night waiting for the arrival of a doctor and another member of the family. As they wait, worried about the sick mother in the other room, they are instead visited by a mysterious unseen intruder who pays the family a visit and strains the bonds between them.

Samara Friedman (Grandmother) is a first year planning to major in LLSO and TAPS. At her high school, she acted in a variety of musicals and plays including, but not limited to, Pippin (Catherine), Macbeth (Lady Macbeth), Spring Awakening (Thea), and The Trial (Wife). During her senior year of high school, she co-produced, directed, designed, and starred in RUMORS, a farce by Neil Simon. In addition to theater, Samara has been playing piano for 13 years. She is a classically trained pianist, but enjoys improvising and writing songs. She looks forward to continuing her theatrical career at UChicago!

Aashna Moorjani (Younger Daughter) is a second year majoring in Creative Writing. She has absolutely no theater experience but figured now was as good a time as any to start. She spends most of her time writing papers and running to rehearsal. In the rare moments she’s not, you’ll find her in the movie theater, struggling to bake fancy French desserts, or drinking black coffee at one of Hyde Park’s many coffeeshops.

Annie Leonard (Servant) is a fourth year Psychology major. This is her first show with UT, but she’s currently involved with some film projects at UChicago including but not limited to Survivor Chicago. She also has a longstanding history of playing piano at musical theatre revues, so if in need of an accompanist, feel free to reach out.

Tyler Pleasant (Director) is a third-year Chemistry PhD student. He has previously worked on Scientific Method (Director) and Winter 2022 Workshops (Production Manager) with UT, as well as directed, acted, and props designed many shows in undergrad. He hopes The Intruder draws you into the world of the characters and, metaphorically, you can join them in sitting around the family table.

Carolyn Heinzer (Co-Stage Manager) is a second year Computer Science and English major. They have previously worked on The Trail to Oregon! (Assistant Lighting Designer) and written for three Theater[24] workshops (Disneyworld Is Not for Zombies, Urine Trouble, and Me n U). This is probably the most normal show they have done so far.

Tanaka Nemarundwe (Scenic Designer) is a second year Political Science major. She has previously acted in University Theater’s Spring 2022 production of The Trail to Oregon!, and she acted in 5 musicals (including Les Miserables, Once on This Island, and a few others) during high school. The Intruder is her first show doing scenic.

Belle Nahoom (Costume Designer) is a second year Art History major. She has previously worked on The Heirs (Assistant Stage Manager), Scientific Method (Costume Designer) and the BA Thesis Yivdak (role of Jared). She is also the Capocomico of the Commedia Dell’Arte troupe on campus. Belle is very grateful to be involved with this production and all of its cast and crew.

Felix Chen (Props Designer) is a third-year Sociology and Linguistics major (not yet declared). He has previously worked on Scientific Method (Assistant Stage Manager). He is interested in learning more about theater.

Samantha Doepker (Sound Designer) is a first year Computer Science major. This is her first show at the University of Chicago, along with Perfect Match, and she looks forward to being involved with University Theater more in the future.

When she finds that years of heavy drinking have given her liver disease, sorority girl Brittany turns to Tinder in order to find a liver donor who’s her “perfect match.” However, under what pretense will her date accept? For the first time ever in front of an audience, the cast of Perfect Match will perform a concert selection of songs from the hilarious student-written musical.

Joelle Singer Jensen (Brittany) is a first year. She is super excited to be doing her first show with University Theater! Some of her previous shows include Into the Woods (Witch), Moon Over Buffalo (Charlotte), The Last Five Years (Cathy), Cinderella (Cinderella), Julius Caesar (Brutus), and Sweeney Todd (Johanna).

Lucienne Totti (Jesse) was born and raised in Puerto Rico and is a first year (class of 2026) double major in Political Science and Public Policy.

Katy Yeh (Katie) is a first year student, and she’s so excited to be making her University Theater debut in Perfect Match! Some of her favorite musicals she did in high school include Little Women, Godspell, and Into The Woods. She is so grateful for her family, friends, and everyone who has worked so hard to make this musical come to life. She hopes you enjoy the show!

Isabel Schmitz (Ensemble: Rose, Doctor, Sorority Girls, Dating App Men), soprano, is a fourth-year undergraduate studying Music and Comparative Human Development. She sang Barbarina in AAMA Salzburg production of Le Nozze di Figaro in the summer of 2022, soprano vocals in Yivdak in the Spring of 2022, and participated in Berlin Opera Academy’s 2021 Summer Opera Festival in Switzerland, singing chorus in Hänsel und Gretel. She will be singing chorus in Suor Angelica and be featured in the Opera Scenes Showcase in Music on Site Institute’s 2022 season in Wichita, Kansas this December. She has been a member of the Vocal Studies Program since first year, studying with Patrice Michaels, and has been a member of Motet Choir under the direction of Dr. James Kallembach since first year, and started as soprano section leader in the winter of 2022. She teaches voice with and is the Communications Director for the South Side Free Music Program, a UChicago RSO, for which she has taught since first year.

Abby Kanes (Bass) is a second year TAPS and Business Economics major. UT credits include The Heirs Workshop (Aveline), Scientific Method (Props Designer), The Trail to Oregon! (Bass) and the TAPS show Amazons and Their Men (The Frau). She has played in pit orchestras at her performing arts summer camp and is thrilled to perform bass in UT as well. She is also a member of UT Committee.

Pravan Chakravarthy (Violin) is a second-year majoring in Physics and Linguistics. Previous pits he has played in include Big Fish and The Mystery of Edwin Drood, and he has also participated in other music groups on campus such as the University Symphony Orchestra, the South Asian Music Ensemble, and the Middle East Music Ensemble. He composes his own music as well, and arranged the electric guitar part for Perfect Match for violin.

Owen Dominguez (Keyboard) is a second year Biology and Music double major. She has previously worked on The Trail To Oregon! (spring 2022) and various other shows in high school. She likes octopuses, talking about people’s passions, and if you have a cat please tell her where/when she can pet it.

Allegra Hatem (Playwright) is a recent alum of UChicago (B.A. Sociology 2022). While a student she worked in the prop shop as TAPS tech staff, was treasurer of University Theater, and was awarded the Francis X. Kinahan Memorial Prize (awarded annually the graduating senior who was contributed the most to University Theater). Show credits include Vanya & Sonia & Masha & Spike (Nina, St. Mark’s Players, Fall 2022), She Kills Monsters (Tilly, Hyde Park Players, Winter 2020), and The Winter’s Tale (Props, UT, Fall 2019). Perfect Match is her first endeavor in theatrical writing, a project she began in Scott Elmegreen’s “Songwriting for Musical Theater” course in winter 2021. Huge thanks to Scott and writer’s cohort for their feedback and encouragement, to friends and family for their support, and to the cast, band, and crew for bringing the script to life! (Since Perfect Match is a work in progress, she welcomes any thoughts, comments, or suggestions on the script - if you have them, please let her know at ahatem@uchicago.edu or on Instagram @allegrahatem.)

Reese Klemm (Director) is a fourth-year Economics major, double minoring in French and Cinema Studies. She is happy to be back working with students in the rehearsal room after having directed The Trail to Oregon! in Spring 2022. In the past, Reese was also assistant production manager in Fall 2019 and a crew member in countless Theatre[24]s! She can’t wait to show everyone what the cast and crew has worked on for the last 3 weeks over! Special thanks to Tate, Dave, Dhirpal, and the RShively Casting Agency (@reidshively)!

Gui Galhardo (Vocal Director) is a fourth-year studying Comparative Human Development, and thrilled to be vocal directing this show alongside their co-director Reese! Having vocal directed The Trail to Oregon! during Winter and Spring 2022 as his first show with UT, he’s excited to be returning to the directorial slate for the ‘22-‘23 season. Gui would like to thank their director, Reese; music director, Owen, and the members of the band; the stage management, design, and production teams; and, of course Allegra Hatem for writing and composing the show! He hopes you enjoy all the hard work the actors have put in these last few weeks, and they also wish you the best of luck finding your own Perfect Match, whether they come from an app, the UNOS list, or within!

Becky Vazquez (Props Designer) is a fourth-year Biology major who has previously worked on other shows such as Rosencrantz and Guildenstern are Dead and Love’s Labour’s Lost. This is the first workshop they have participated in, and they are very excited for everyone to see it!

Samantha Doepker (Sound Designer) is a first-year Computer Science major. This is her first show at the University of Chicago, along with The Intruder, and she looks forward to being involved with University Theater more in the future.

Daniel Arad (Assistant Director) is a second-year Neuroscience and HIPS major. He previously worked on The Trail to Oregon! as an assistant stage manager (a delightful time) and various film projects on campus.

Lily McHugh (Assistant Stage Manager) is a third-year Biology major and Visual Arts minor. She has previously played the daughter in The Trail to Oregon!. This is her first managerial position within University Theater. Special shout-out to her manager, the honorable Reid Shively from R.Shively Casting Agency, for securing this position for her.

Zander Galluppi is a sixth-year Ph.D. candidate in the Committee on Immunology. He has performed in over fifteen UT/TAPS productions: some of his favorite credits include Amazons and Their Men (The Man), Animals Out of Paper (Andy), and Peter and the Starcatcher (Smee). Zander’s Chicago regional credits include work with Mercury Theatre Chicago, the Beverly Arts Center, Dominican University, This Moment Productions, and Underscore Theatre Company. This year is also Zander’s fourth year on UT Committee. You can catch him next month appearing in Dominican University’s production of A Midsummer Night’s Cirque as a professional guest artist playing Flute!