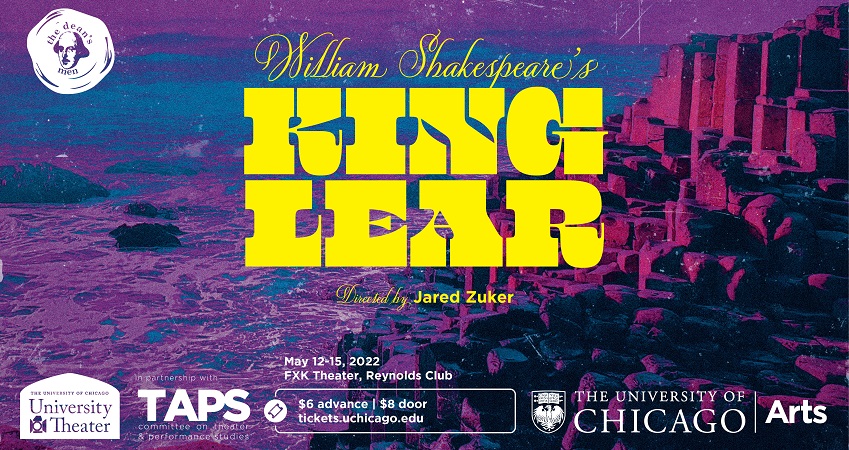 King Lear has ruled for many years. As age overtakes him, he divides his kingdom amongst his children. Misjudging their loyalty, he soon finds himself stripped of all the trappings of state, wealth, and power that had defined him.

Jonathan Rufino (King Lear) is a third-year pre-med and Physics major. He is a long-standing member of The Dean’s Men and has previously acted in Love’s Labour’s Lost (Ferdinand, Autumn 2021), Twelfth Night (Sir Andrew Aguecheek, Spring 2019), and Macbeth (Macduff, Winter 2019). He regrets that, given some health issues this quarter, he hasn’t had as much time to devote to this play as he would have liked, but has nevertheless absolutely loved working with this incredibly talented cast and crew and hopes you enjoy the show!

Caroline Kaminsky (Goneril) is a PhD student in Biochemistry and Molecular Biophysics. She acted and directed with the University of Illinois’ What You Will Shakespeare Company and performed in Dean’s Men’s Love’s Labour’s Lost (Sir Nathaniel). She would like to dedicate her performance to her senior friends. She’s lucky to have had this year together and can’t wait to see where life takes them! ❤️

Murphy DePompei (Duke of Albany) is a fourth-year Public Policy and Spanish major. She has previously acted in the Dean’s Men productions of The Winter’s Tale as Mamillius/Perdita, Antony and Cleopatra as Cleopatra, and Love’s Labour’s Lost as the Princess of France. She is so excited to close out her University Theater career with King Lear and is incredibly grateful to the wonderful cast and crew for making the experience so memorable. After graduation, Murphy will be attending the University of Pittsburgh School of Law!

Steele Citrone (Oswald/King of France) is a second-year Media Arts and Design major with a cluster focus in Game Design. He is very excited for his Dean’s Men’s debut, but previously he has acted in shows such as The Old Man & The Old Moon (Ensemble), Macbeth (King Duncan/Porter/Seyton), and Beetlejuice: The Musical (Lydia Deetz). As Steele will be turning the banners many times during the show, he wants you to remember that Red is Lear, Purple is Gloucester, Green is Albany, and Blue is France.

Alex Nobert (Regan) is a second-year Environmental Science and History major. She has previously acted in Original Sin and The Heirs, as well as Theater[24]. She is excited to be a part of the Dean’s Men!

Gabe Schneider (Duke of Cornwall/Captain) is a fourth-year Biology major. Continuing a life of doing everything at the last minute, he is starring in his first UT production. In his abundant spare time he enjoys biking, tennis, and applying to medical school.

Ryan Cairns (Cordelia) is a first-year Classics and Political Science major. She has previously served as an Assistant Director for UT’s The Light and the Dean’s Men’s Love’s Labour’s Lost, and is a current Front of House Manager and UT Committee Liaison for TAPS. Outside of theater, you can catch Ryan speeding down the midway on her bike, at the gym with Womxn Who Lift, or reading in bay windows across Chicago.

Abigail Scharf (Earl of Gloucester) is a first-year at the College, pursuing a double major in Political Science and Gender and Sexuality Studies. This is her first show with both UT and The Dean’s Men! Outside of theater, Abigail is classically trained in opera and is a public speaker against domestic violence.

Nick Schwarz (Edmund) is a second year Classics and Fundamentals major. He has appeared in the TAPS production of My H8 Letter to the Gr8 American Theatre, the UT BA project Ah Wing and the Automaton Eagle, and a host of MaroonTV and Fire Escape Film productions. Like his character, Edmund, Nick tends to be bitter.

Jess Aaron (Curan/Messenger/Herald/First Servant) is a second-year Philosophy and History major. She is on the Dean’s Men Board, and has previously acted in virtual programming last year. She is very excited to appear in her first in-person show at UChicago. Outside of theater, Jess loves to bake, read science fiction, and wear bright yellow. She is also the current President of Keller House and the Orientation Student Director for O-Team.

Laura Mahaniah (Gentleman/Old Man/Knight) is a second-year majoring in Theater and Performance Studies and minoring in Linguistics, Anthropology and Russian. Her theatre involvement here at UChicago has included My H8 Letter to the Gr8 American Theatre (Ensemble), Original Sin (Andrea), Love’s Labour’s Lost (Rosaline) and a variety of workshops. When not in rehearsals, Laura can usually be found in one of the university’s dance studios, attempting to learn and occasionally succeeding at new breaking moves.

Jack Pflieger (Understudy - King Lear) is a third-year English major with a passion for Shakespeare and performance art. His previous acting experience includes King Lear (Lear), Twelfth Night (Orsino), A Midsummer Night’s Dream (Oberon), as well as The Importance of Being Earnest (Ernest Worthing) and My Fair Lady (Henry Higgins).

Rory McGann (Understudy) is a first-year Molecular Engineering major, and this is his first play with the Dean’s Men. In the past, he has appeared in Into the Woods (Jack), Singin’ in the Rain (Don Lockwood), and The Complete Works of William Shakespeare: Abridged and Revised (Adam), among others. He is beyond thrilled to have gotten to work with the cast and he wishes them the best of broken legs!

Natalie Floreancig (Understudy) is a first-year Physics major. This is her first show with UT, but she hopes to be involved with more in the future! Outside of rehearsal, Natalie can be found wandering through the stacks of the Reg while she thinks about doing her psets. She wants to thank the cast and crew for making this production a great experience!

Jared Zuker (Director) is a fourth-year Theatre and Fundamentals major. He has been acting with the Dean’s Men since his first year and has acted as their social chair for the past two years. This is his first time directing and is overjoyed to have such an amazing group of people to work with on this production. He hopes you enjoy the show!

Spencer Ng (Production Manager) is a third-year studying Computer Science and Theater & Performance Studies. Past UT and TAPS credits include Love’s Labour’s Lost (Stage Manager), My H8 Letter to the Gr8 American Theatre (Stage Manager), Waiting for Godot (ASM), and The Winter’s Tale (ASM). Spencer also serves as the UT Chair, and he is so grateful he had the chance to work with this team of amazing designers and wishes them well as they graduate. He also hopes you enjoys the storm, banners, eyeballs, and period-accurate shoes on stage!

Coco Liu (Stage Manager) is a first-year tentative Chemistry and Linguistics major. Her previous credits include The Light (Stage Manager) and Love’s Labour’s Lost (Assistant Stage Manager). This is her third time writing a show bio, and she unfortunately still doesn’t have a fun fact about herself.

Kelly Mao (Stage Manager) is a first-year Computer Science and Math major. Her previous UT credits include The Heirs (Production Manager) and Love’s Labour’s Lost (Assistant Stage Manager). She enjoys deep conversations and long walks on the beach at sunset.

Kate Ferrera (Scenic Designer) is a fourth-year Geophysical Sciences major with a minor in French. This is her first time serving as scenic designer in college. She worked on props for The Heirs last quarter, and designed sets and costumes in high school. Outside of theatre, Kate writes, draws, and serves as co-coordinator for the Environmental Justice Task Force.

Katherine Nurminsky (Props Designer) is a fourth-year Math major. They have previously worked on the Dean’s Men’s The Winter’s Tale. Outside of theater, Katherine also works in their lab and dances.

Ian Tierney (Assistant Director) is a second-year Theater and Performance Studies major. This is his first time working with University Theater or The Dean’s Men. In his free time, Ian enjoys playing with his dog Addie, playing sports, cooking/eating, and reading.

You Li (Assistant Production Manager) is a second-year Art History and Sociology major. She has previously participated in UT’s Staged Readings as stage manager and designed for Theater[24]. This is her first time in a quarter-long theater production. Outside the theater, You enjoys aesthetics/media studies, sci-fi, photography, cinema, anime, and going to the Point.

Konstantin Shmarko (Assistant Production Manager) is an Economics major at the College. King Lear is his first foray into production management, after acting in UT’s The Heirs, and the Autumn 2021 iterations of the Theater[24] and Staged Readings. Outside of theater, there is a nice bench. Konstantin likes to sit on it sometimes.

Angel Zou (Assistant Scenic Designer) is a first-year Computational and Applied Math major. She assisted in designing and creating sceneries for King Lear. This is her first time in a UT production. Outside of theatre, Angel draws digital art, writes short stories, and watches birds.

Jo Zeng (Assistant Props Designer) is a third year Psychology major. This is her first time doing anything associated with University Theater, whether acting or backstage. Outside, she plays video games, reads, and competes with the University of Chicago Mock Trial team.

Frances Poth (Assistant Props Designer) is a second-year Economics major and Cinema and Media Studies minor. She signed up for this show in large part so she could write memes on prop paper.

Emily Zen (Assistant Lighting Designer) is a first-year in the College. She previously assisted with props in Love’s Labour’s Lost.

Helen Zhou (Assistant Sound Designer) is a second-year Media Arts and Design and Data Science major. This is her first time working in theater and she really enjoyed it. Outside of theater, Helen reads, writes, and studies fanfiction and Vocaloid.