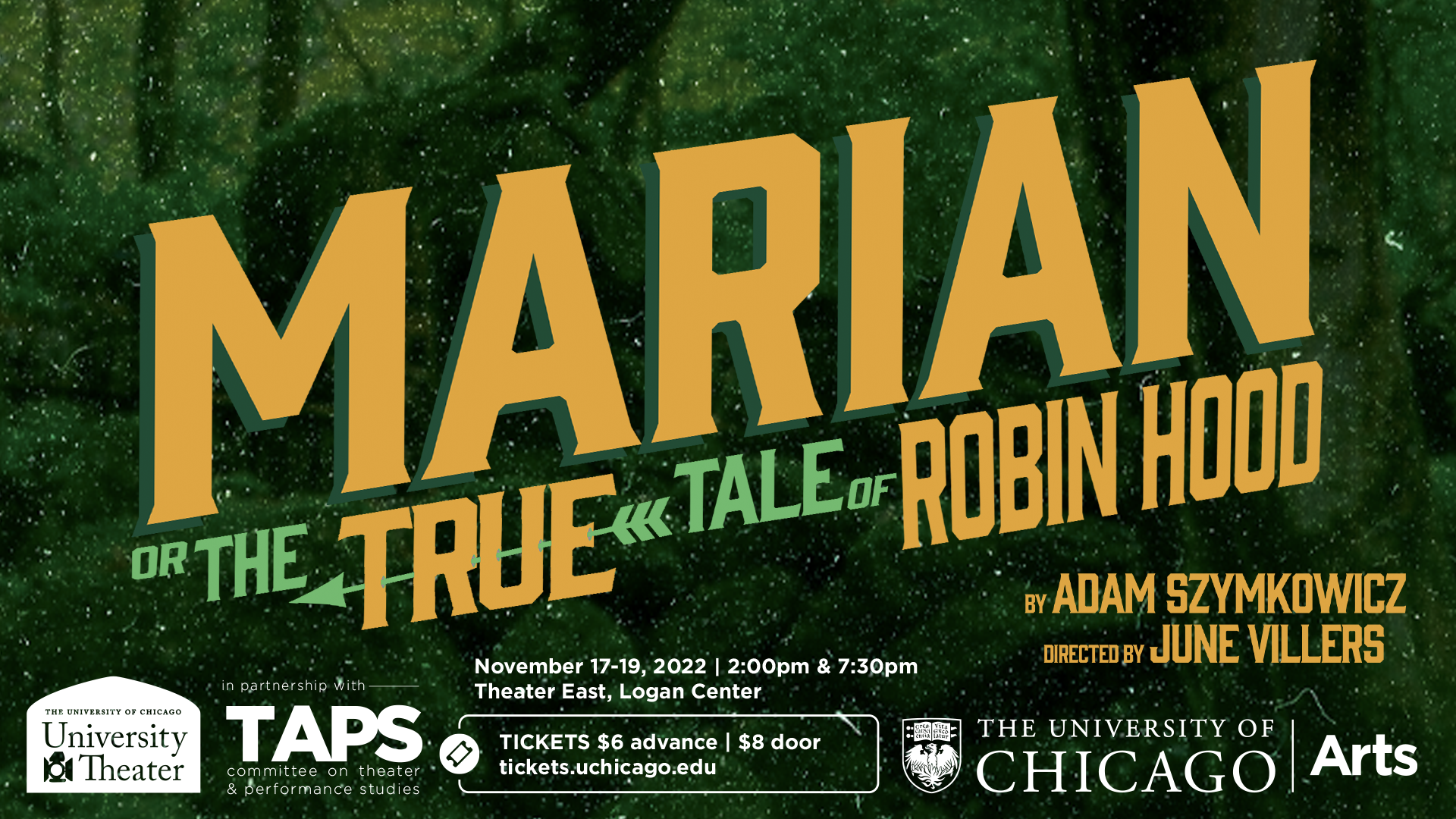 A gender-bending, patriarchy-smashing, hilarious new take on the classic tale. Robin Hood is (and has always been) Maid Marian in disguise, and leads a motley group of Merry Men (few of whom are actually men) against the greedy Prince John. As the poor get poorer and the rich get richer, who will stand for the vulnerable if not Robin? What is the cost of revealing your true self in a time of trouble? Modern concerns and romantic entanglements clash on the battlefield and on the ramparts of Nottingham Castle. A play about selfishness and selflessness and love deferred and the fight. Always the fight. The fight must go on.

Buy tickets at this link!

Abigail Scharf (Marian) is a second-year Political Science major with a Quantitative Social Analysis minor. This is her second UT show, the first being King Lear (Gloucester) last spring. If she could change the Merry Men tune, she would change it to Habanera from Bizet’s Carmen.

Emma Linderman (Alanna Dale) is a third-year CMST and TAPS major. Previous UT and TAPS shows include Amazons and Their Men (The Extra), Scientific Method (Makayla), and Yivdak (Zahara). She is also a member of UChicago’s independent improv group, Occam’s Razor. She thinks that the Merry Men should sing Androgynous by the Replacements.

Joseph DePaula (Little John) is a first-year prospective History major & avid wall-starer. He is a new member of both UT and Commedia, but he’s participated in theatre for a longer time than he is willing to admit publicly. He thinks the Merry Men should sing They Might Be Giants’ “How Can I Sing Like a Girl?” on account of (spoilers:) they’re all women!

Gwendolyn Laub (Lady Shirley) is a third-year TAPS and GNSE major! At the University she has previously been seen in The Trail to Oregon! (Son, UT), An American Killer in College (Jean, Maroon TV), Perfectman (Jane, Fire Escape Films), and a variety of Off-Off Campus shows! Coming up you can see Gwen in Leeching (Hailey, Fire Escape Films), Ghost Story (Amy, Fire Escape Films), and on November 30th and December 1st staged readings with New Play Development (one of the plays being written by Marian’s own George Corrin)! Also, she thinks a terrible mistake has been made. The Merry Men should actually be singing “Before He Cheats” by Carrie Underwood. Email: gwendolyn.laub@gmail.com Instagram: @gwendolyn.michelle

Jack Getz (Prince John) is a first-year at the university. This is his first show with UT, but he’s looking forward to participating further in the future. He thinks the Merry Men should sing “(We Got) The Guillotine” by the Coup.

Laura Mahaniah (Will Scarlett) is a third-year at UChicago studying TAPS, Anthropology and Linguistics. At the University, she has previously worked on Romeo and Juliet (Dramaturg), King Lear (Old Man/Knight), Fields of Asphodel (Syd), Love’s Labour’s Lost (Rosaline) and My H8 Letter to the Gr8 American Theatre (Ensemble). When not in Logan, Laura Tutondele can usually be found rushing to one of the campus’ dance studios. It is her sincere opinion that the Merry Men should be singing The Devil Went Down to Georgia with full musical accompaniment. Email: lauratutondele@gmail.com Instagram: @lauratutondele

George Corrin (Much the Miller's Son)

Josh Winston (Friar Tuck) is a second-year Near Eastern Languages and Civilizations major. This is his second UT show, having previously been in The Trail to Oregon! (Understudy, Men). He believes the show is sorely missing a Merry Men rendition of The Pina Colada Song.

Catherine Rohret (Tommy of No Consequence) is a fourth-year Creative Writing and Religious Studies major. This is their first time acting in a mainstage UT show, after performing in the staged reading of PNOK last fall. Catherine advocated hard for the Merry Men (and Much) to sing “I Want It That Way” by the Backstreet Boys, to no avail.

TianTian Xu (Sir Theo the Punctual/Tanner) is a first-year at the College. This is her first UT show and she believes the Merry Men should hum the Wii theme song under their breath, gradually getting louder and louder until it drowns out everything happening on stage.

Jon Shao (Sir Lenny the Observant) is a double major in Physics and TAPS. Experienced at casting clown-like characters.

Julia Morales (Lucy) is a first-year at the College. This is her first show with University Theater. She is excited to entertain you, and hopes you enjoy the show!

Natalie Floreancig (Guard 1) is a second-year Physics and Public Policy major. Last year, you may have seen her handling the seamless banner transitions in King Lear. Outside of theater, Natalie enjoys exploring Chicago on the CTA, playing the Chicago Transit Adventure (CTA) board game, riding the CTA to Chipotle, adding to her CTA poster collection, and playing guitar. Natalie thinks the Merry Men should sing Love Shack, however she requests that you send CTA songs her way so that she can create a CTA themed playlist.

Caroline Lopez (Guard 2) is a second-year Chemistry major. This is her second UT show: she previously worked on The Trail to Oregon! (u/s Mother). Instead of their current (iconic) song choice, she thinks the Merry Men & Much should storm the castle while singing “Thnks fr th Mmrs” by Fall Out Boy.

Jeff Lind (Sheriff of Nottingham) is unfortunately a third-year Economics and Psychology major, but he is a Cinema and Media Studies minor, so he’s got a little bit of flair. He played Grandpa and/or Cletus in UT’s The Trail to Oregon! in the Spring, and he’s excited to play the Sheriff of Nottingham this time around. Lind would like to dedicate this performance to his agent, Gwendolyn Laub, who got him this role in the first place.

June Villers (Director) is a fourth-year English and Creative Writing major. Her previous credits include The Heirs (Lighting Designer) and The Trail to Oregon! (Sound Designer), and this is her first foray into directing. Outside of theatre, she likes looking out at Lake Michigan like she’s pining for a lover at sea. She thinks it’d be really cool if the Merry Men sang I Want It That Way instead.

Konstantin Shmarko (Co-Production Manager) is a third-year Economics major at the College. He has previously worked on King Lear (Assistant Production Manager) and acted in The Heirs (Teagan), UT Staged Readings, and the Theater[24] festival. In his free time, he likes to complain about how he never has enough free time.

Nico Giunta (Co-Production Manager) is a fourth-year Computer Science and MAAD major. He’s previously worked on Waiting for Godot (Assistant Sound Designer), Welcome Back to My Channel (Assistant Production Manager) and Love’s Labour’s Lost (Production Manager). He spends way too much time staring at screens, whether he’s staring at budget spreadsheets, working at the MADD Center, or playing an absurd amount of Splatoon 3. He thinks the Merry Men should try singing “Run Away With Me” from Carly Rae Jepsen’s hit 2015 album Emotion.

Maya Carlos Doyle (Stage Manager) is a second-year in the College and a possible Linguistics/English major. She most recently ASM’d on Amazons and Their Men (TAPS Winter 2022), designed lights for Scientific Method (UT Spring 2022), and assisted lights for The Trail to Oregon! (UT Spring 2022) and Etteilla (Le Vorris & Vox Spring 2022). To be honest, after this quarter, she can’t quite remember what she does outside of the rehearsal room. She would like to send a big thank you to all the members of TAPS pro-staff, the amazing cast and crew, and especially, Yufei, Belle, and Emma!

Eleni Lefakis (Dramaturg/Assistant Director) is a second-year TAPS and Data Science major. Her previous UT mainstage credits are The Heirs (Stage Manager), The Trail to Oregon! (Assistant Director/Dramaturg), and Romeo & Juliet (Co-Production Manager). She is also currently working on Macbeth in Space (Dramaturg), going up 7th Week Winter in the FXK, and Be More Chill (Co-Director), going up 6th Week Spring in Theater West! She is thankful to all but one member of the cast for listening to her Dramaturgical ramblings and kindly requests that the remaining cast member (one Josh Winston) stop reminding her of her past failures as a researcher.

Thomas Nielsen (Scenic Designer) is a fourth-year Creative Writing and Computer Science major who’d like to thank everyone who helped paint, build, and move all of the shifting parts of the world of Marian.

Daisy Marshall (Props Designer) is a third-year Sociology major. He’d like to thank the fellow crew members deeply and sincerely for their hard work. Daisy’s worked in the past on The Trail to Oregon! (Props Designer) and the Ah-Wing workshop (Props Designer), but Marian is by far the show with the most swords. He was going to take a stab at making a joke of that, but now he thinks there’s no point.

Raquel Buriani (Costume Designer) is a second-year Cognitive Science and TAPS major. Her previous UT credits include King Lear (Assistant Costume Designer) and Autumn 2022 Theater[24] (Director and Designer). She is looking forward to costume designing The Laramie Project next quarter!

Emily Zen (Lighting Designer) is a second-year Computer Science major. She previously worked on King Lear as an assistant lighting designer and is excited to be designing her first show!

Belle Nahoom (Assistant Stage Manager) is a second-year Art History and Data Science major. Her previous theatre credits include The Heirs (ASM), The Intruder Workshop (Costume Designer), Scientific Method (Costume Designer), and the B.A. thesis Yivdak (Actor). She is also involved with the Commedia Dell’Arte improv troupe on campus. Belle thinks that the Merry Men should sing “Oops!….I Did It Again” by Britney Spears instead.

Emma Xu (Assistant Stage Manager) is a second-year Business Economics major and maybe some mysterious minor(s). She was previously an actress in one of the UT Workshops, and Marian, or the True Tale of Robin Hood is her first UT position in stage managing! Apart from theater, she is a clarinet player, and she has a special interest in Ancient Near Eastern civilizations.

Alexa Bukowski (Assistant Scenic Designer) is a fourth-year Computer Science and Astrophysics double major. This is Alexa’s first show with UT! Besides this, Alexa enjoys video games and cartoons (anime and western cartoons) and sleeping. Thank you for reading and enjoy the show!

Luke Walker (Assistant Props Designer) is a second-year Media Arts and Design and Creative Writing major. He has previously worked on The Light (Props Designer). Luke is a member of Off-Off Campus.

Libby Konjoyan (Assistant Costume Designer) is a first year at the College. This is her first show with UT.

Kelly Mao (UT Committee Liaison) is a second-year Computer Science and Math major. Her UT credits include The Heirs (Production Manager) and Love’s Labour’s Lost (Assistant Stage Manager). She enjoys deep conversations and long walks on the beach at sunset.