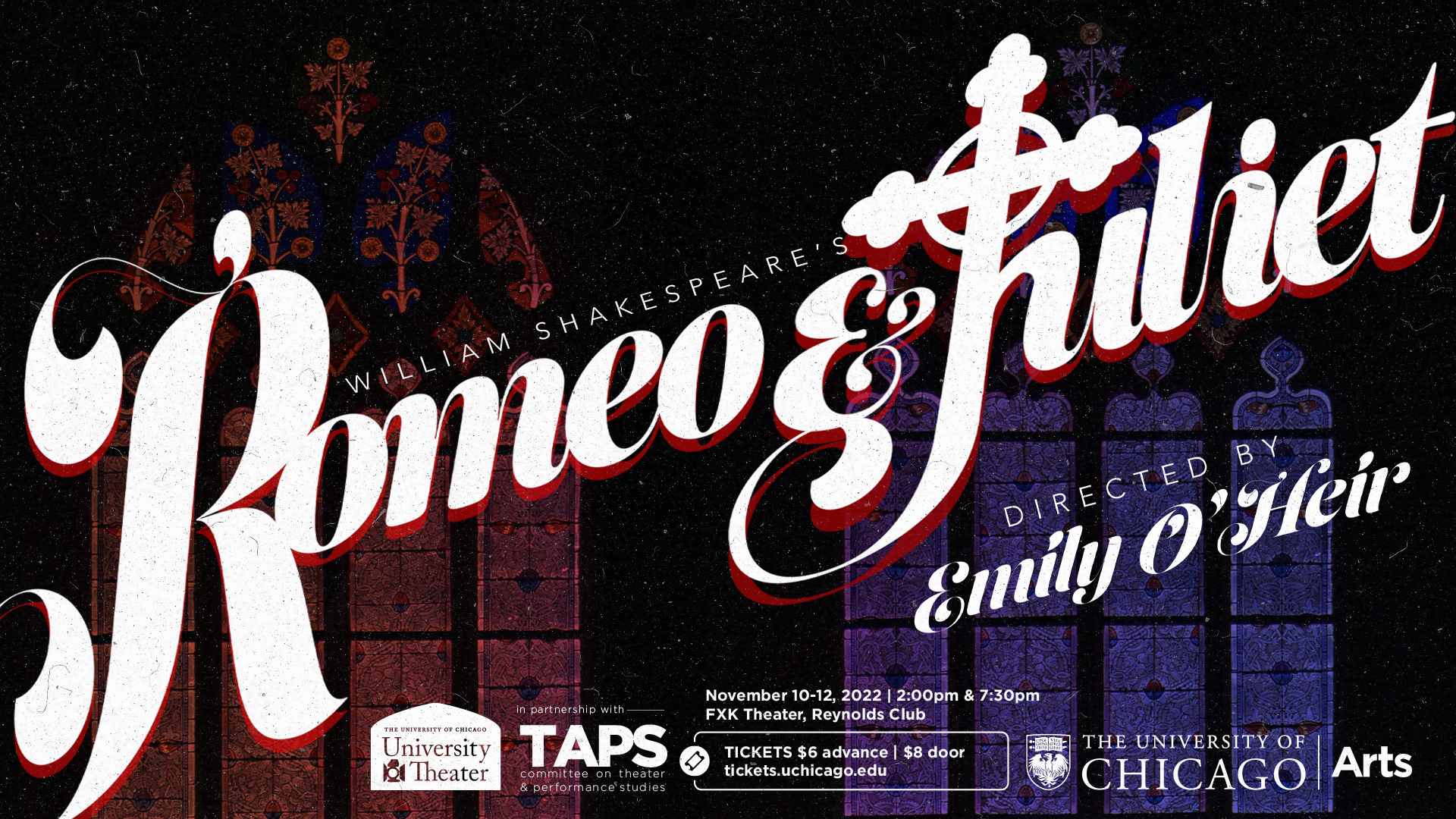 Two families, two lovers, and a hatred so old that no one remembers its cause. Defying the barriers forged from their families’ enmity, Romeo and Juliet challenge their community by risking everything for love. Shakespeare sets his immortal tale against a community uprooted by conflict—as resonant today as it was 400 years ago. Moved by mutual infatuation and desire for a new life, Romeo and Juliet dare to pursue a reality where hearts are not ruled by hatred.

Content warning: This show deals with themes of self-harm, suicide, and parental abuse.

Buy tickets at this link!

Jo Selmeczy (Romeo) is a first-year Creative Writing/TAPS major. This is their first Dean’s Men production. Before college, they performed in their high school’s productions of Romeo and Juliet (Nurse) and Clue (Wadsworth), and were a part of their high school’s improv troupe. Offstage, Jo enjoys rock-climbing, playing guitar, and pontificating on the relentless melancholy of existence.

Rory McGann (Juliet) is a second-year majoring in Molecular Engineering. Rory previously worked as an Understudy in King Lear last spring, and has performed in Singin’ in the Rain (Don Lockwood) and Into the Woods (Jack) in the past, among others. He enjoys writing, climbing, singing, and making crossword puzzles. He would like to thank the cast & crew for their tireless effort in putting this performance together and his family & friends for their continuous support. He hopes you enjoy the show!

Alex Nobert (Mercutio) is a third-year Environmental Science and History major. She has previously acted in King Lear (Regan), The Heirs (Aveline) and Original Sin (ensemble member), as well as Hyde Park Community Players’ Much Ado About Nothing (Don John). When she is not learning how to properly use a cigarette or fall without hurting her knees, she is trying her best to promote sustainability on campus (please please sign up for the subsidized off campus composting program!! Ask me about it, I’ll send you the link!). She is so grateful to be a part of this incredible cast and crew. And lastly, a plague o’ both your houses!

Giancarlo Beritela (Benvolio) is a first-year Romance Languages and Economics major. He has previously appeared in Conflict (Narrator), Lonely (Frank), and Clue (Chief of Police). This is his first show with the Dean’s Men, the first of hopefully many more in the years to come!

Michael Donnelly (Friar Lawrence) is a fourth-year History and Philosophy major. He has no previous theater experience, and is really just happy to be here.

Charlotte Manier (Nurse) is a third-year Biology and LLSO major. After many years of learning and teaching Shakespeare with The Viola Project, Romeo and Juliet is her first full Shakespeare production. Joining this production has, without a doubt, been her best decision since coming to UChicago. There’s no faith, no trust, no honesty in men…except for the Dean’s Men.

Jonathan Rufino (Capulet) is a pre-med and Physics major. Previous Dean’s Men’s credits include Spring 2022’s King Lear (Lear), Autumn 2021’s Love’s Labour’s Lost (Ferdinand), Autumn 2020’s Much Ado About Monologues (King John), Spring 2019’s Twelfth Night (Sir Andrew Aguecheek), and Winter 2019’s Macbeth (Macduff). He would like to apologize in advance for how mean his character is and assures you that, in real life, he is just a silly little guy. Enjoy the show!

Ariana Baginski (Lady Capulet) is a fourth-year Molecular Engineering major on the Bioengineering track and TAPS minor. She has previously worked for several UT productions including The Trail to Oregon! (Co-Stage Manager), My H8 Letter to the Gr8 American Theatre (Assistant Sound Designer), The Old Man and the Old Moon (Assistant Scenic Designer), and The Winter’s Tale (Assistant Scenic Designer). She would like to thank the cast and crew of Romeo and Juliet for being so insanely talented and supportive!!!

Abby Kanes (Tybalt) is a second-year TAPS and Business Economics major. In UT she performed in The Heirs Workshop (Aveline), and the TAPS pro-show Amazons and Their Men (The Frau). Favorite credits include Wait Until Dark (Gloria), Two Gentlemen of Verona (Lucetta), Romeo and Juliet (Friar Lawrence, Capulet), and The Crucible (Rebecca Nurse). She has played bass in the pit orchestra for The Trail to Oregon! and the Perfect Match Workshop. She is on TAPS Admin Staff as a Front of House Manager and also a member of UT Committee.

Jacob Halabe (Prince Escalus/Friar John) is a second-year History and Economics major. Romeo and Juliet is his first UT show and he’s so excited to be a part of the cast. When he’s not impersonating a priest or pretending to govern Verona, Jacob likes reading and spending time with friends.

Christian Beltran (Sampson/Apothecary/Paris' Page) is a first-year prospective Computer Science major. He has been acting all four years of high school, performing in Guys and Dolls (Nicely-Nicely Johnson), TMLMTBGB (Varies), You’re a Good Man, Charlie Brown (Linus van Pelt), The Addams Family (Lucas), Puffs (J Finch / Zack Smith), and The Lightning Thief (Percy Jackson), and stage managing The Diary of Anne Frank his junior year. Romeo and Juliet is his first performance at UChicago, and hopefully far from his last!

Jess Aaron (Abram/Watchman) is a third-year Philosophy and History major. She serves as Treasurer of the Dean’s Men Board, and is the Social Chair of her dance group Rhythmic Bodies in Motion. Jess also works as a research assistant on a project about epistemology in the science fiction pulp magazines.

Griffin Bonnin Jones (Balthazar) is a first-year at the College. Not coincidentally, this is his first production with UT and Dean’s Men, and he’s very excited to join the UChicago theatre community. In high school, he played characters such as Sir Andrew in Twelfth Night and Alex Anderson in Lottery Tickets.

Emily O’Heir (Director) is a loosely collected group of parasitic organisms in the shape of a woman. She has worked on a variety of shows in her 13 quarters at the University as an actor, dramaturg, and director. She is a proud member of the Dean’s Men and is grateful to everyone who worked tirelessly to bring this show to life.

Coco Liu (Co-Production Manager) is a second-year Chemistry and Linguistics major. She has previously worked on Love’s Labour’s Lost (Assistant Stage Manager), The Light (Stage Manager), and King Lear (Co-Stage Manager). She promises that she’ll try harder and actually have a fun fact next time.

Eleni Lefakis (Co-Production Manager) is a second-year TAPS and Data Science major. Her previous UT mainstage credits are The Heirs (Stage Manager) and The Trail to Oregon! (Assistant Director/Dramaturg). She is also currently working on Marian, or The True Tale of Robin Hood (Assistant Director/Dramaturg), going up 8th Week in Theater East! She’s really excited that after three terms of involvement in UT, she can finally say she’s a Dean’s Man!

Nathalie Lam (Co-Stage Manager) is a world-renowned chef, best known for her scones (pronounced “scon”). In her free time, she’s a PhD student, writing her thesis on the intersectionality of ontological liminality in the hegemonic posteriority of the built environment. Notably, she has been People’s Sexiest Man Alive for 15 years in a row (you might recognise her from Season 2 of Naked and Afraid). Nathalie is honoured to be stage managing for the first time.

Ryan Cairns (Co-Stage Manager) is a second-year in the College studying Political Science & Human Rights with minors in Classics & Democracy Studies. She has previously worked on Love’s Labour’s Lost (Assistant Director), The Light (Assistant Director), and King Lear (Cordelia), and looks forward to directing The Laramie Project next quarter. In the small amount of time that she’s not at Logan, you can find her sipping chai at the 61st Street Farmer’s Market or eating Jimmy John’s at the Point. She would like to shoutout the amazing management team (Emily, Nathalie, Sophie and Maisie), but most importantly Diet Coke for being necessary support throughout this amazing process.

Laura Tutondele Mahaniah (Dramaturg) is a third-year at UChicago studying TAPS, Anthropology and Linguistics. At the University, she has previously worked on King Lear (Old Man/Knight), Fields of Asphodel (Syd), Love’s Labour’s Lost (Rosaline) and My H8 Letter to the Gr8 American Theatre (Ensemble). Her current projects include Marian, or the True Tale of Robin Hood (Will Scarlett) and assisting Princess Mhoon Cooper with her research with the Chicago Black Dance Legacy Project. When not in the rehearsal room or classroom, Laura Tutondele can usually be found in one of the school’s dance studios.

Colin Cooper (Sound Designer) is a fourth-year Chemistry major. Before Romeo & Juliet, he worked on Antony and Cleopatra, Love’s Labour’s Lost, and King Lear as sound designer. He currently serves as the president of the Dean’s Men.

Ryanne Leonard (Assistant Production Manager) is a first-year planning on a Political Science and Human Rights major. This is her first show she’s worked on, but is hoping to do more in the future!

Sophie Regales (Assistant Stage Manager) is a third-year Near Eastern Languages and Civilizations major. A long time musical lover, she is very excited to be a part of Romeo and Juliet. It is her first show with University Theater and she hopes the first of many.

Lena Birkholz (Assistant Dramaturg) is a second-year English and Urban Studies major. This is her first show with the Dean’s Men.

Lola Flores (Assistant Lighting Designer) is a first-year NELC major in the College. This is her first UT show.

Kelly Mao (Assistant Sound Designer) is a second-year Computer Science and Math major. Her previous UT/Dean’s Men credits include King Lear (Co-Stage Manager) and Love’s Labour’s Lost (Assistant Stage Manager). She’s very excited to be returning to her roots (sitting in the dark and hitting the space bar in QLab).