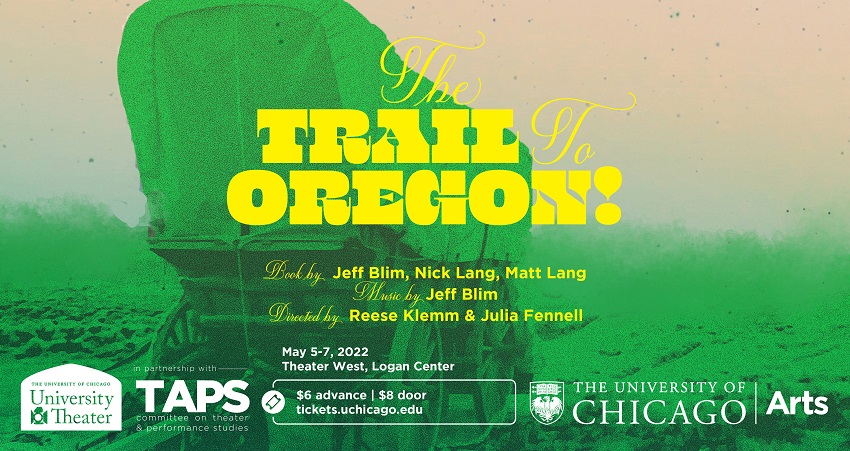 Based on the Oregon Trail computer game that we all grew up with and loved. The Trail to Oregon follows a family of five as they make their way from Missouri to Oregon in 1848. From starvation to bandits to dysentery, the family endures all of these challenges in hopes of a better life in Oregon.

Tanaka Nemarundwe (Mother) is a first-year Political Science and Economics double major. This is her first show with UT, however some of her favorite pre-college theater shows that she has been a part of were Once On This Island, Les Miserables, and Freaky Friday.

Grey Moszkowski (Father) is a fourth-year Political Science major in the College. With UT, he has previously worked on Grenadine (various roles). Outside of UT, he has performed in Cabaret (Ernst Ludwig), Spring Awakening (Adults), The Drowsy Chaperone (Aldolpho), The Music Man (Ensemble/Quartet u/s), Rent (Ensemble), and other works, both established and original. He also has experience in short films. Grey is excited to close out his college career with the cast and crew of TTO!

Gwendolyn Laub (Son) is a second-year double majoring in Theater and Performance Studies and Gender and Sexuality Studies. This is Gwen’s first UT show, but you may have seen her performing with the improv group Off-Off Campus! Some of her favorite previous roles have been Agnes in She Kills Monsters and Katherine in Newsies. Gwen would like to thank her family for always supporting her and the cast and crew of TTO for being so welcoming and creating an amazing show! She hopes you enjoy it and fully believe that this twenty year old girl is a seven year old boy.

Lillian McHugh (Daughter) is a second-year Biological Sciences major with a Visual Arts minor. She has previously been involved with UT’s staged readings and a virtual monologue series by the Dean’s Men. She can’t wait to introduce her new script, “DARLA: The Untold Story of a Western Barmaid”, to the masses.

Harry Franklin (McDoon et al.) is a second-year Public Policy major. He has previously performed at the University in Original Sin (Simon) and Love’s Labour’s Lost (Don Armado). When not doing theatre, Harry enjoys a cappella, tap dancing, and joggling. He would like to thank the amazing cast and crew for a fantastic experience these past four months!

Jefferson Lind (Grandpa/Cletus) is a second-year Economics and Psychology major (sorry). This is his first show with UT, although he’s a prolific entertainer. In his spare time, he enjoys doing schoolwork, his job at the CLI, and work in Student Government (sorry again). Lind would like to dedicate this performance to all of the grandfathers in the audience. This one’s for you.

Josh Winston (Understudy - Men) is a first-year prospective Near Eastern Languages and Civilizations major. He’s been doing theater since middle school, but this is his first official show here at UChicago! He hopes that you all enjoy taking your wagon party down the trail to Oregon!

Caroline Lopez (Understudy - Mother) is a first-year Chemistry major. She is thrilled to be part of her first UT show and would like to thank the cast and crew for creating such a fun and welcoming environment and working so hard to put up this hysterical show.

Kaleigh Perez (Understudy - Kids) is a first-year Anthropology and Art History major. This is her first show with UT, but you might have seen her at several open mics around campus. She would like to thank the cast, crew, and directors for being so welcoming and wonderful in the past few months as the show came together.

Davis Cook (Guitarist) is a third-year English major. This is his first time playing for a theater band.

Hayden Cremen (Drummer) is a second-year History and Cinema and Media Studies major.

Abby Kanes (Bass) is a first-year TAPS and Business Economics major. In UT she performed in the The Heirs Workshop (Aveline) in Fall 2021 and the TAPS show Amazons and their Men (The Frau) and this quarter she is the lead props designer on Scientific Method. She has played in pit orchestras at her performing arts summer camp and is thrilled to perform bass in UT as well. She is also a member of UT Committee.

Elena Gill (Pianist) is a second-year Public Policy and Linguistics major. She has previously worked on Yivdak (Music Composition/Direction) and Love’s Labour’s Lost (Assistant Sound Designer). In high school, she played Keyboard 1 in the pit for RENT, Chicago, and Sister Act.

Owen Dominguez (Pianist) is a first-year biology and music double major. This is her first show with UT. In the wild you can find her researching frogs, composing music, and preaching the good word of octopuses.

Reese Klemm (Co-Director/Choreographer) is a third-year Economics major and French minor (anticipated French and Cinema double-minor). Her previous credits include working as Assistant Production Manager (The Winter’s Tale, Fall 2019), Assistant Director (The Old Man and The Old Moon, Winter 2020), a handful of writing/directing credits from Theater[24], and two seasons of UT Committee. She is incredibly excited to make an example of Committee’s first cross-quarter show and introduce UChicago to StarKid Productions, the company responsible for this unhinged musical!

Guilherme Galhardo (Vocal Director) is a third-year Comparative Human Development major and Math minor. This is their first show with UT, and he’s very grateful for the opportunity to work with fellow directors Julia Fennell and Reese Klemm. Gui has had so much fun bringing the score to life alongside the actors and instrumentalists, and would especially like to thank music director Sophie Hachten and pianist Elena Gill. He hopes you enjoy the show as much as he has, and they can’t wait to see all the actors’ hard work pay off!

Ruhi Sah (Production Manager) is a fourth-year in the College. She has previously worked as Assistant Production Manager on Waiting for Godot, and she is enthusiastic about all things StarKid!

Ariana Baginski (Calling Stage Manager) is a third-year Molecular Engineering major on the Bioengineering track and a TAPS minor. She has previously worked on The Winter’s Tale (Assistant Scenic Designer), The Old Man and the Old Moon (Assistant Scenic Designer), and My H8 Letter to the Gr8 American Theater (Assistant Sound Designer). She would like to thank her co-SM, Danielle, and the wonderful ASMs, Daniel and Emma, for sharing the workload of getting this show on its feet and for bringing fun into every rehearsal moment.

Danielle Yablonovskiy (Deck Stage Manager) is a second-year Economics and Psychology major. She has previously worked on Welcome Back to My Channel (Assistant Stage Manager) and Ah Wing and the Automaton Eagle: Fall Workshop (Stage Manager). She would like to thank Ariana for being the best co-SM ever and the rest of the cast and crew of The Trail to Oregon for making her first UChicago musical an unforgettable experience!

Eleni Lefakis (Dramaturg/Assistant Director) is a first-year TAPS and Data Science major. The Trail to Oregon! is her second UT mainstage, the first being The Heirs (Stage Manager). She is currently a member of UT committee and an honorary member of Commedia Dell’Arte (Stage Manager). She is forever grateful to the cast and crew of this show for putting up with her ballet-inspired choreography and teaching her that the American Bison is not, in fact, extinct!

Thomas Nielsen (Scenic Designer) is a third-year Computer Science and Creative Writing major. You might’ve seen her previous work in Love’s Labour’s Lost. She’d like to thank everyone who helped realize the set that was only on paper just a few months ago!

Daisy Marshall (Props Designer) is a second-year Sociology major and Media, Arts, and Design minor. He previously designed for Original Sin (Lighting Designer) and the Ah Wing and the Automaton Eagle workshop (Props Designer). His work this time around included buying nerf weapons with school funds, sliding in with goofy online purchases right under the wire, and putting too many lobster .pngs on illegal tender. He’s incredibly grateful to the whole cast and crew for this opportunity.

Amelia Simonoff (Lighting Designer) is a fourth-year Neuroscience and Music double major, as well as on the pre-med track. In the past, she did camera work for 86th Annual, as well as lighting design for Fields of Asphodel and Ah Wing and the Automaton Eagle. She hopes that you choose good names.

Nora Schultz (Assistant Scenic Designer) is a second-year English and Gender and Sexuality Studies major. She has previously appeared in Love’s Labour’s Lost (Dumaine/Forester), has both acted in and curated multiple Theater[24]s, and is currently serving as the Arts Chair of the Dean’s Men. Most importantly, they have actually successfully completed the original Oregon Trail computer game once before, but they don’t remember how they did it, so don’t ask them for tips!

Eli Wiener (Assistant Costume Designer) is a first-year Neuroscience and Biological Sciences major. This is their first (but hopefully not last!) show with University Theater. Outside of the costume shop or classes, you can find them dancing with UBallet, putting enzymes in tiny tubes in lab, or speaking to the many benefits of a Harper Café iced chai.

Asia Quizon-Colquitt (Assistant Costume Designer) is a second-year double majoring in East Asian Languages and Civilizations and Visual Arts. This is her first time being involved in a theatrical production.

Sophia Pegues (Assistant Lighting Designer) is a third-year Psychology and Business Economics major at the College.

Carolyn Heinzer (Assistant Lighting Designer) is a first-year Computer Science and English major. They have previously written for Theater[24] in Fall and Spring quarter (“Disney World Is Not for Zombies”, “Urine Trouble”) and participated in staged readings.